The all-new CX-8 is set to come to Thai showrooms luring potential buyers of both pickup-based SUVs and entry-level luxury ones. 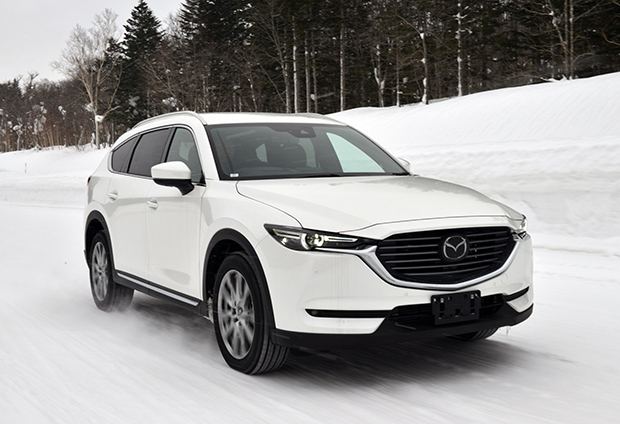 The fact that Mazda is the only player among established pickup brands in Thailand to not have an SUV derivative could be a thorn in its side.

Even Nissan has decided for the first time to bring the Terra, based on the Navara NP300 workhorse, to local showrooms later this year using the advantageous PPV (passenger pickup vehicle) tax.

By making an SUV off its BT-50 would also enable Mazda to level the field with its competitors. Other models include the Chevrolet Trailblazer, Isuzu MU-X, Mitsubishi Pajero Sport and Toyota Fortuner.

However, Mazda seemingly isn’t too perturbed about this because it actually has some vehicles to answer the demands of people needing a three-row package with SUV looks to match like the CX-8 and CX-9.

Both are built on car-based platforms rather than the shakier chassis-on-frame variations seen in the likes of the Fortuner. Although the CX-8 and CX-9 share the same underpinnings, the former is deemed as a sportier version.

As you now well know, Mazda wants to offer the CX-8 for sale in Thai showrooms rather the CX-9. Better even, there’s a plan to assemble the CX-8 at the brand’s Rayong factory to help make its prices as competitive as possible.

Although the CX-8 will suffer a 5% tax disadvantage over those pickup-based SUVs, executives at Mazda Sales Thailand are keen in keeping starting prices under two million when it goes on sale late this year or early 2019 at the latest. Attractively kitted and powered Fortuners and Everests already cost over 1.7 million baht.

Mind, the CX-8 is actually a bigger vehicle than all of those pickup-based SUVs if you take some figures on paper into consideration like the 5m overall length and 3m wheelbase (4,900mm and 2,930mm respectively to be exact). 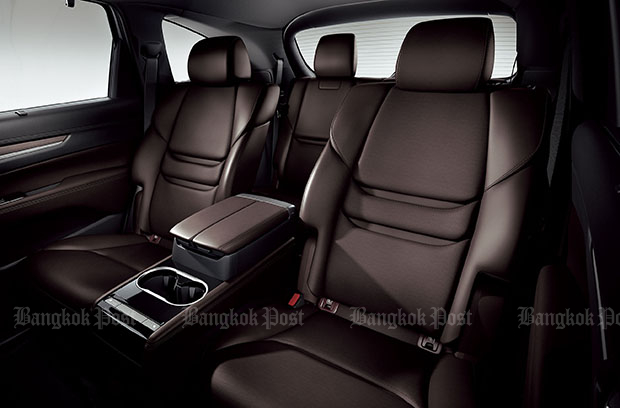 Jump into the cabin of the CX-8, as how we did at Mazda’s Kenbuchi Proving Grounds in Sapporo, and all reveals. It feels effectively airy in the first and second rows of seats, although the last tier is more suitable for children.

It appears that much focus has been given to legroom for second-row occupants thanks to that long wheelbase. In fact, there are three configurations for the middle cabin: two big seats with either a fixed console or walk-through access between them, plus a conventional bench for three.

According to product strategists at Mazda, it hasn’t been finalised yet which matrix is coming to the Thai-spec CX-8. Once again, though, executives are eager to offer the two-seat alternative, as well, because it could also help snare some buyers choosing to be driven in Toyota Alphards. Yes, the CX-8 is quite a comfortable place to be in if taking this particular aspect solely into consideration. 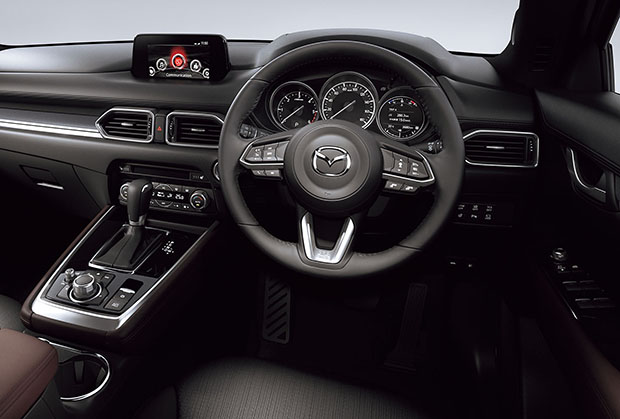 Another area the CX-8 wins over those pickup-based SUVs is perceived quality. Whether you’re chilling out as a passenger or taking the helm of the cockpit, it feels sumptuously upmarket thanks to nice materials used especially on the cleanly designed fascia. Yes, buyers eyeing for entry-level luxury SUVs such as the BMW X1 may take a good look at the CX-8.

Although the driving test was on the short side of things, the differing road surfaces at this snowy Hokkaido-based proving grounds was good enough to garner some initial impressions of the CX-8’s driving manners.

The CX-8 feels properly bigger than the two-row CX-5 on the move. Yet the steering is nicely tailored in terms of both weight and sharpness. As well, the ride over coarse and bumpy roads is smooth and well-controlled. It’s in a completely different league when you compare what can be found in a pickup-based SUV. 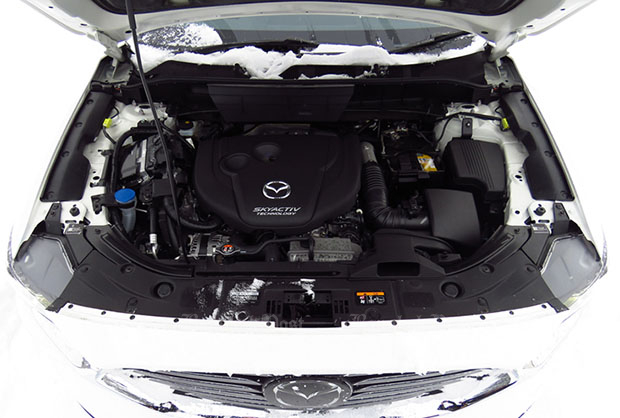 Our test vehicle came with 2.2-litre diesel-turbo and six-speed automatic as featured in the top-spec CX-5. However, the CX-8 gets an uprated fuel injection system for better combustion and higher outputs of 190hp and 450Nm compared to the CX-5’s 175hp and 420Nm ratings.

Probably due to better noise insulation that usually comes in more expensive models, the diesel clatter in the CX-8 is less audible than in the CX-5. The 15hp power increase has also seemingly offset the CX-8’s circa-100kg weight penalty over the CX-5, which tips the scales at 1,726kg in full uniform. Yes, the CX-8 doesn’t lack grunt and has a more effortless performance than in the 200hp Everest, the most powerful of all those porkier pickup-based SUVs.

Although our test vehicle came in front-wheel drive format, there’s also four-wheel drive to choose from. Both are being considered for the Thai market. No low-range gears are available in the CX-8 (or CX-9) meaning that those pickup-based 4x4 SUVs hold an edge in terms of off-road capability.

The all-wheel-drive system of the CX-8 is shared with the CX-5. Drive is normally sent to the front wheels and can divert as much as 50% to rear axle when necessary. An engineer has hinted to us that torque-vectoring for the left and right rear wheels would come in the future, although that would partially drive up prices of models fitted with it. 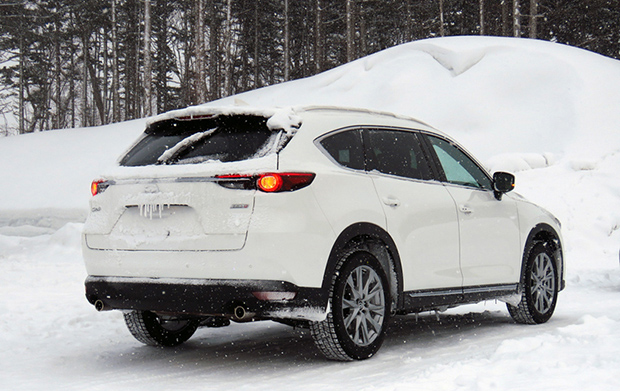 But what’s likely to happen at the Thai launch of the CX-8 would be the additional choice of 231hp/420Nm 2.5-litre petrol-turbo engine sourced from the CX-9. At the moment in Japan, the CX-8 is exclusively diesel and CX-9 solely petrol.

First impressions suggest that the CX-8 will be an interesting choice for well-heeled buyers. The CX-8 feels way more capable than those pickup-based SUVs and should easily compensate for its slightly higher prices. At the same time, the CX-8 would easily kill the sales prospects of imported, two million baht-plus SUVs like the Kia Sorento, SsangYong Rexton and Subaru Outback.

The CX-8 may be the most expensive Mazda SUV and family car to ever grace Thai showrooms, although its role is not to be underestimated at all. That’s because the CX-8 can thwart potential rivals above and below itself in the price ranks. 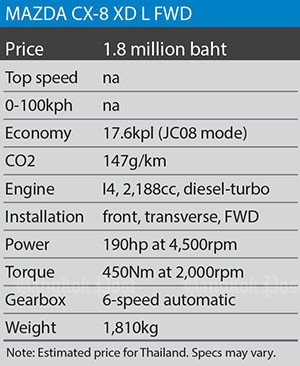