BMW Thailand has mastered the art and science of turning out as many as 19 different car and bike models, but proposed new government rules may cramp its style

Workers assemble an X Series car on the production line at the Rayong plant of BMW Thailand. PHOTOS: KWANCHAI LUANGSATHIT

Low manufacturing costs in Thailand and growing consumer affluence across Asia are an attractive combination for many businesses looking to use the country as a base for manufacturing as well as domestic and export sales.

However, Thailand has been experiencing economic doldrums of late, which has slowed wealth creation. That in turn poses challenges for makers of luxury cars, sales of which have averaged around 20,000 units a year for the past two decades. 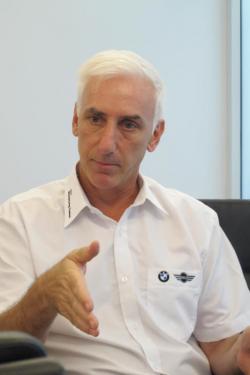 The market did see a healthy uptick of 11% last year to 22,441 units, with the German duo of Mercedes-Benz and BMW together accounting for 90% of sales. It's a small niche in an automobile industry dominated by mid-market Japanese brands that sell hundreds of thousands of vehicles. It's also a challenging one in which producers must respond to demanding buyers seeking specific models and options.

BMW Group is rising to the challenge and is confident that the domestic and Asian premium car markets, especially in China, have room to grow. At its plant in Amata Industrial Estate in Rayong, the company has invested in capacity expansion to ease the pressure on a US plant that specialises in the popular X Series. It is now taking knocked-down X5 and X3 models shipped from Spartanburg, South Carolina, doing final assembly in Thailand and exporting the cars to China.

Aside from meeting Chinese demand for the X series, the Rayong facility serves only the Thai market and is now running at close to its full annual capacity of 20,000 units of all products, a 60% increase from last year.

The plant is the only BMW facility internationally to assemble vehicles for all three brands: BMW, Mini and BMW Motorrad motorcycles with a total of 19 models -- 10 cars and nine bikes.

In Southeast Asia, BMW also has one assembly plant in Malaysia and one in Indonesia serving the domestic markets, while orders from Cambodia, Laos, Myanmar and Vietnam are entirely imported from plants in the West.

"We can get cars to the market much faster. For Chinese customers, we are able to offer higher options like heads-up display, for instance, that were not given before." 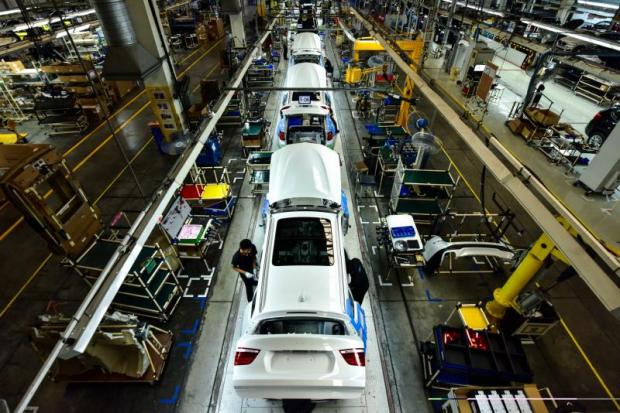 The Chinese plant in Shenyang will eventually start building the high-demand X models as well, but it will take more time and a big investment to retool. The Thai factory is able to integrate new models more quickly and adapt faster to demand due to its relatively small production volume and limited automation, contributing to higher flexibility.

Bike in a box

Anyone who has ever wanted to see how cars and motorcycles are produced would marvel at the efficiency of the BMW manufacturing plant in Amata Industrial Estate in Rayong.

Well organised, well lighted and tidy, it is a place where everything is exactly where it needs to be to keep the process flowing.

The plant is divided into two rooms: one for the assembly line and another for the warehouse.

Precisely labelled parts are delivered from the warehouse to the assembly line, which is divided into sections connected by a rail transport line. At each station the workers — usually five or six — have exactly 18 minutes to complete their task before the rail starts moving.

Workers in each section are responsible for knowing how to put together five different models, all of which are hand-assembled to provide maximum flexibility in fabrication.

"Automation takes away flexibility to bring new models to our factory. Thailand has a special craftsmanship. What people can do with their hands is incredible. It is different from Germany where it is skilled craftsmanship. Here it is more of an artistic craftsmanship," says Jeffrey Gaudiano, managing director and CEO of BMW Manufacturing (Thailand) Co Ltd.

"You can see that whenever you walk down and see how people are really doing with these cars. Every station has 18 minutes and what they are doing is precise and perfect."

The same approach applies to the BMW Motorrad motorcycle, which starts out as "one bike in a box", as Chayapak Laisuwan, director of communications and public affairs, calls it. Just like a toybox, but for bigger boys.

"In this one box, we have the exact number of parts we need for one Motorrad — no extras," said Mr Chayapak.

Since 2000, the Thai manufacturing unit has expanded capacity significantly and this year it increased its workforce from 350 to 800 people, mainly by adding a second shift. Last year, the company invested about 1.1 billion baht in new capacity, engine localisation, updated testing equipment and infrastructure expansion. An additional investment of 488 million baht this year will pave the way for making next-generation models.

Though consumer confidence remains muted locally, BMW remains upbeat and is looking forward to creating some new excitement with new vehicles, in line with the move toward plug-in hybrid electric vehicles and autonomous driving.

However, government incentives for high-technology production as well as infrastructure support remain crucial.

"No question, Thailand wants to go toward electric vehicles. The government has made it clear as well, but they have to develop the right infrastructure," said Mr Gaudiano.

"There are still some issues. There is no existing infrastructure to plug them in except privately. We have to figure out a way of working between the private sector and the government sector to come up with infrastructure for plug-in vehicles."

As well, a trained and qualified workforce to handle the up-and-coming technology is essential. If Thailand wants to really shift toward electric vehicles, the government also has to attract battery manufacturers, as well as provide incentives for manufacturers to bring in other forms of high technology.

Investment regulations can make or break the development of an industry. The Thai government has made some good strides to support research and development and high-tech activity, but Mr Gaudiano said one new regulation currently under discussion seems to run counter to the government's agenda.

The proposed regulation outlines certain requirements for different industries, and is aimed at ensuring equity between those inside and outside free zones. BMW falls into a category that requires each free zone automaker to have its own body and paint facility, which the company doesn't have now, if it wants to maintain other free zone privileges.

For BMW Thailand with 19 different models, Mr Gaudiano said, "a body and paint facility makes absolutely no sense for us. Besides, this is not new technology and not something that will carry Thailand forward.

"Welding, it has been invented since the 1800s. Why are they forcing us to invest in old technology that doesn't bring many jobs? Thailand doesn't really provide good incentives for bringing in high technology, if compared to Malaysia. It's really a threat [to the industry]."

The proposed regulation, in Mr Gaudiano's view, is simply not appropriate for small-volume, high-technology producers seeking to enter the market. Its focus is suited more to big Japanese manufacturers that produce tens of thousands of units.

"It's difficult to compare us at BMW to a mass producer because we are not," he said. "[This regulation] is the one that keeps me up at night wondering how are we going to do this and how we, frankly, can keep production here if this regulation passes."

He added that BMW invests differently because it has a different business model. The company already has adequate capacity in paint and body activities located elsewhere to supply other markets.

"We already have capacity, so why invest in more capacity? Here we want to specialise in high-tech manufacturing and next-generation products," he said, hoping the finalised regulation will not be applied to low-volume manufacturers such as BMW.

Being a small-production facility where flexibility is the cornerstone, less automation seems to be the key, despite the productivity and cost advantages it can create in some industries.

"I would fight against automation because our strength is in being flexible and having the speed to meet the market demand," Mr Gaudiano said.

"From my experience, if we increase automation significantly, it takes away from our flexibility to bring a lot of new models into the factory. The greater amount of automation and special fixtures would be cost-prohibitive. It will create fixed-point assembly that takes away some of our flexibility."

The Thai workforce, he added, has a special craftsmanship that can be applied to manufacturing, different from Germany where it is more of a skill than a craft.

"But the number and the variety of cars that we build, for us it doesn't make so much sense. We will continue this way because it's the type of market that we are producing in."