Cars battle the run-off from the Phetchabun mountain range as they make their way along the main highway near the Wang Thong Hospital in Wang Thong district of Phitsanulok. (Photo by Chinnawat Singha) 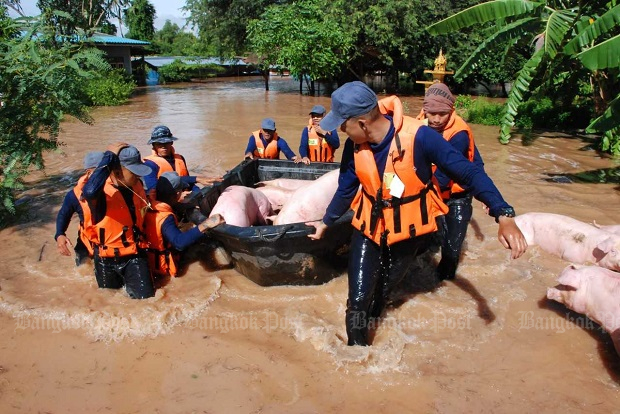 Soldiers help save pigs from the flood at Montha Saimangthong's farm in Phitsanulok's Wang Thong district. (Photo by Chinnawat Singha)

Pigs washed away, some rescued

In Phitsanulok's Wang Thong district, dozens of pigs were drowned or swept away when a flood barrier  collapsed on Monday morning, allowing water from the Wang Thong river to flood through the farm.

Montha Saimangthong, the 48-year-old owner of the farm, said the earth dyke was breached about 6am. She was caught off guard and watched helplessly as her pigs were swept away by the water.

Fortunately, help arrived shortly after, with neighbours, local officials and soldiers coming to her aid.

Ms Montha said she had more than 200 pigs. Only about 150 had been rescued.

She estimated the loss at around 250,000 baht, as each pig should fetch around 5,000 baht. She expected to recoup some of the money because local traders would buy the fresh carcasses at 1,000 baht each.

The Department of Disaster Prevention and Mitigation was assessing the damage in eight provinces that are still reeling from heavy floods triggered by Doksuri, which started out as a typhoon before weakening to a tropical depression as it swept over parts of the North and Northeast and has since moved into Myanmar.

The depression also battered parts of the lower South. The weather bureau has predicted rain will linger in the Central Plains, the East and parts of the South until today.

Doksuri left in its wake flooded plains and homes in 29 districts and 215 villages in eight provinces – Kalasin, Sakon Nakhon, Phrae, Uttaradit, Phitsanulok, Phetchabun, Phangnga and Satun – from Friday to Sunday.

(Doksuri is a Korean word meaning eagle, or in general, a bird of prey.) 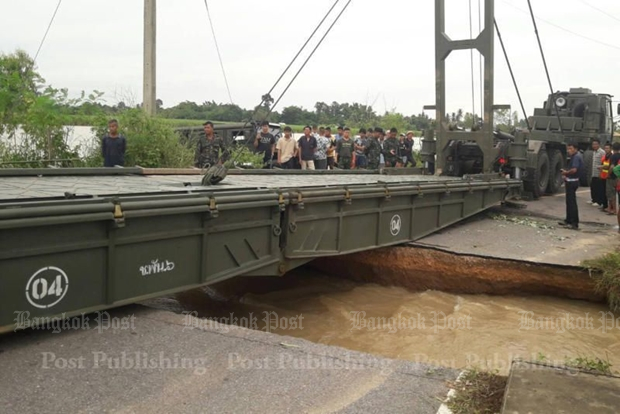 Soldiers fit a temporary bridge over one that was washed out by tropical depression Doksuri in Kalasin. Photo by Yongyut Phuphuangphet

The department chief, Chatchai Promlert, said his agency has worked with local administration organisations to hand out assistance to flood victims while repairs of flood-damaged bridges and roads were under way.

Flash floods in vast areas took residents by surprise. Soldiers and local emergency response units raced against time as they arrived in boats to rescue stranded residents and house them in temporary shelters or with relatives.

Mr Chatchai said the situation was improving with less rainfall but authorities were closely monitoring weather conditions and the level of rainfall, including in areas where the floods were ebbing.

Fast-deployment emergency teams were on standby in flood-prone localities such as on river banks and at the feet of mountains where water runoff has given way to landslides and flash floods.

You can read the full story  with details on individual provinces here: http://www.bangkokpost.com/news/general/1326235/doksuri-leaves-grim-picture