A glimpse into Mazda's future with Vision Coupe and Kai concepts

The next-generation 3 hatchback is being previewed with new design language, engine and platform; new 6 could break new niche.

In the past couple of years, Mazda has made some significant strides in design, putting it ahead of compatriot car brands when it comes to combining svelteness and sportiness.

Take a look at the current offerings it has in Thai showrooms. The 2 and 3 family cars, plus the CX-3 and CX-5 SUVs, all have that familiar front grille and head light design to play effect to those aforementioned design attributes. It’s all part of the brand’s so-called Kodo design language.

Now, Mazda plans to take its “Soul of Emotion” design philosophy to the next level with the unveiling of the Vision Coupe (see sidebar) and Kai concept cars in Tokyo recently. Led by the Vision Coupe, the Kai’s main visual highlights include a pointy noise when viewed from the side and squat rear end aping that of a Touring Car racer. 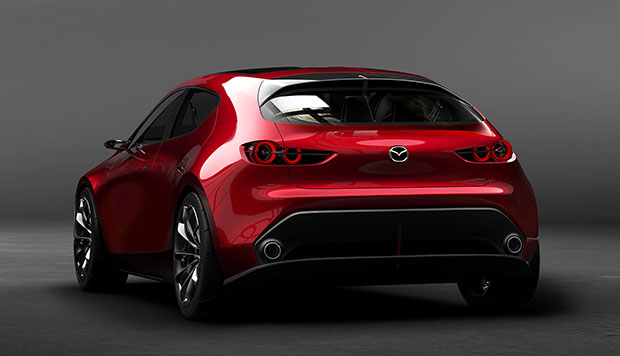 The details are equally attractive: sharp-looking slim head lights and circular rear lamps. Yes, it looks so Alfa-esque. However, Mazda’s R&D boss was keen to point out when we said the design was so European or, more specifically, Italian. “No, this is Japanese,” insists Kiyoshi Fujiwara with a smile.

In the typical fashion of show cars, the Kai has small side mirrors and door handles to help bring out those aspects of the overall appearance. And yes, those huge 20-inch wheels shod with ultra-slim tyre profiles additionally help on the wow factor, although they are more for show.

Just looking at the car, it’s quite a no-brainer that the Kai is previewing the next-generation 3 in hatchback form which Mazda freely concedes is coming to the market in 2019 The Kai’s dimensions reveal it all. It’s 4,420mm long, 1,855mm wide and 1,375mm tall. The wheelbase is measured at 2,750mm – 50mm more than in the current model and competitive in-class. 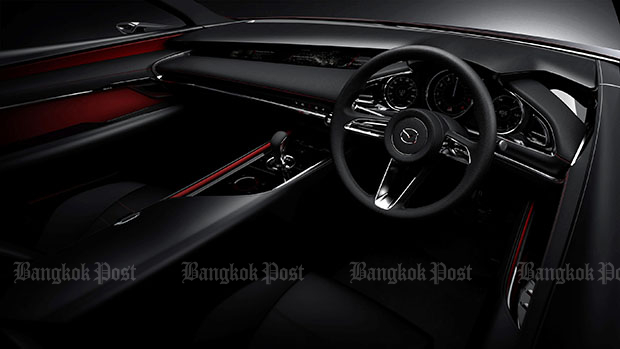 The interior is also said to be speaking a new language for other future models, as well. The cockpit feels more driver-oriented with analogue-looking dials that are highly likely to be of the digital type on the next 3. But whether that wide and slim information display running on the top of the dashboard and operated by touchscreen rather than the rotary dial will make it to production remains to be seen.

It was also recently that Mazda strived to equip their mass-selling cars with materials that are both nice to look and touch. The Kai continues that tradition with sporty trim around the cabin. Actually, perceived quality was one area that helped distinguished Mazda’s interiors from other Japanese brands.

Apart from the unveiling of the Kai at Japan’s biennial motor show, Mazda has also taken the opportunity to discuss some new technical developments. The first is the newly-billed Skyactiv-X engine, an evolution of today’s Skyactiv-G petrol head featuring a new kind of combustion. In layman terms, Skyactiv-X burns fuel more efficiently to help reduce fuel consumption and CO2 emissions when compared to Skyactiv-G. Merits of improved response and tractability are also on the menu with some kind of supercharging technology. 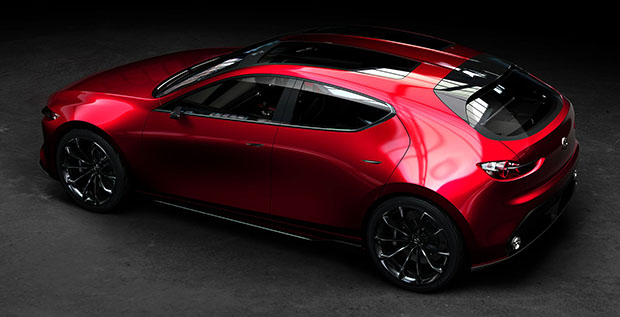 Mazda will start with a displacement of 2.0 litres and four cylinders for Skyactiv-X. And with a 500cc per cylinder approach already adopted by some European brands, there should be a 1.5-litre three-pot coming in the future to serve small cars like the CX-3 and 2. Mazda says the current Skyactiv-D diesel still has the potential to be developed further despite the news you have been hearing about oil-burning engines. “Here at Mazda, we do not cheat,” another executive merrily told the media forum for Skyactiv-X.

No details have emerged so far on the transmission Skyactiv-X will be hooked up to. But if Mazda is to improve economy and CO2 levels in 2019, it’s most likely that the number of forward ratios be increased from today’s six-speeder. A nine-speed unit is a likely candidate.

Mazda has openly stated that hybrids and eventually all-electric drivetrains will follow in the future, explaining the newly formed alliance between themselves, Toyota and parts maker Denso in the development of electrified components.

The other new technical idea in the Kai is the vehicle architecture. Like many other makers, Mazda will be building a new common platform to be used extensively in its model range. Although Fujiwara didn’t delve into the details, a 48V structure is most likely to feature in the mild hybrids.

Hiroshi Innoue, head of Asean operations, pointed out that EVs will only be sold initially in countries where there’s a charging grid whose electricity is generated from renewable energy sources. This conveniently puts out Thailand for Mazda’s pending EVs for the time being as the country is still mainly reliant on fossil fuels.

Apart from supporting new technologies, the Skyactiv Vehicle Architecture is also claimed to provide improved levels of NVH (noise, vibration and harshness). Which sounds good because today’s 3, as well as some other Mazdas, suffer from excessive NVH.

Whatever, the Kai is providing the market with a promising view of how the new 3 will turn out to be. It has to because the 3 was always Mazda’s most important and best-selling product on a global basis. But the most striking thing about the Kai is no other than its design. 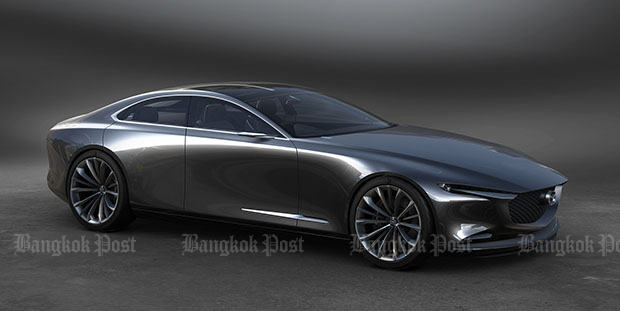 The other concept car Mazda is wooing at the ongoing Tokyo motor show is the Vision Coupe which is touting the brand’s new language for future models including the 3, as featured in the main story.

Presented to the automotive media on the eve of the Japanese car show, the Vision Coupe is arguably one of the sexiest concept cars to have ever emerged from Mazda. You could even consider the Vision Coupe as a follow-up to the Shinari, a show car of 2010 that triggered off the current Kodo design philosophy.

The sheer elegance and the simple details of the Vision Coupe make it look so much like an Aston Martin. The coupe-like saloon silhouette, which can now be seen in the cars like the Aston Rapide, BMW 6-series Gran Coupe and Mercedes-Benz CLS, could appear in the next 6. This would give Mazda’s flagship saloon more zest against rivals like the Honda Accord and Toyota Camry.

Fans of Mazda may recall the Vision RX of 2015 which is actually a concept car Mazda is trying to link with the Vision Coupe. The Vision RX has two doors less and pointed to a possible replacement for the rotary-powered Mazda RX-8.

“Yes, we are still moving forward [with the development of rotary engines]. It’s a technology that has helped defined us from the rest. However, no final decision has been made yet,” said Fujiwara, adding that a possible launch date – if given the go-ahead -- is in 2019 or 2020. 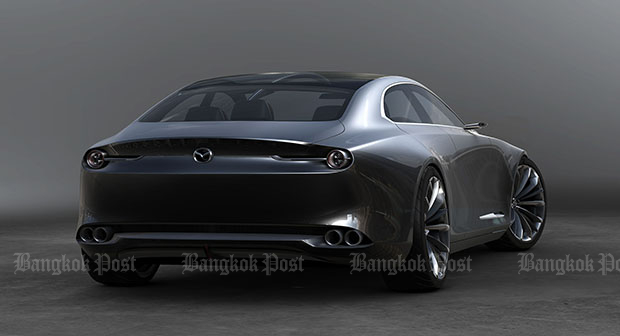