Work remains to get consumers on board

Mitsubishi Motors plans to sell its latest model of Outlander, a 4-wheel-drive SUV PHEV, in Europe later this year and will introduce the technology to Thailand, though it has yet to announce the model for Thai drivers. Photos supplied

Toshinaga Kato smiled as he thought back to 2009, when Mitsubishi Motors became the world's first company to start large-scale production of electric vehicles (EVs).

The vice executive officer of Mitsubishi's Asean division said the company is standing firm on its plan to introduce its EV technology to Thailand as it prepares to apply for the government's tax incentive programme overseen by the Board of Investment (BoI).

Mitsubishi recently showcased its four-wheel-drive Outlander SUV, a plug-in hybrid EV (PHEV), hoping to impress customers in the Asean market with the car's performance, given that people here remain reluctant to buy EVs.

The PHEV is a combination of electricity and petrol-powered technologies. Drivers can plug the vehicles into electric outlets at their homes or offices, as well as have them filled with petrol.

Despite better batteries and the help of traditional engines, many people still lack understanding of electric car technology and are worried about various issues ranging from battery life and driving range to maintenance costs.

These concerns have dogged drivers since they were first introduced to EVs that rely purely on electricity.

"It is a problem that cannot be solved easily," Mr Kato said after he and the company's experts briefed media members on PHEV technology during a recent test drive in Saint-Saturnin-les-Apt in Provence, southeastern France. 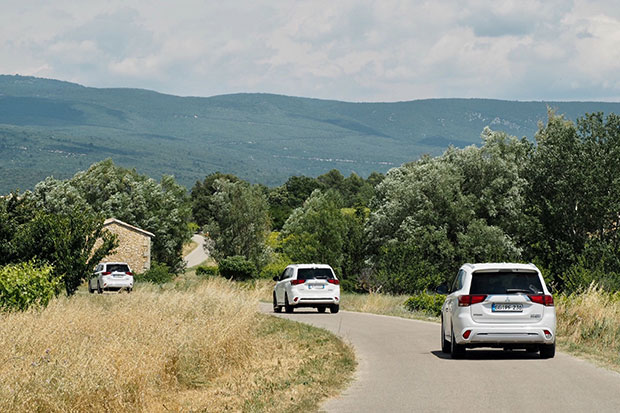 Three Outlander PHEVs drive along a scenic road near the Luberon Massif in France.

Many drivers are undecided about whether they should replace familiar petrol or diesel engines with PHEV or EV technology. A shift from familiarity to modernity is, in some cases, not an easy decision.

Mitsubishi, whose Outlander PHEV has secured the top market share in Europe since being launched in 2013, has pinned its hopes on new technology as it tries to awaken people to the newest car models intended to better fit their lifestyles.

The company wants to see the same success in the Thai market, though it's aware that six other car companies -- Toyota, Honda, Mazda and Suzuki from Japan, and Mercedes-Benz and BMW from Germany -- can be strong competitors.

When asked what is the best technology Mitsubishi will offer to Thai drivers, Mr Kato was coy, saying "our experience" is behind Mitsubishi technology.

The company was the first manufacturer to release EVs and SUV PHEVs into the market, in 2009 and 2013 respectively. As of March, the company has sold 31,000 EVs under the i-MiEV model and 153,000 Outlander PHEVs in more than 50 countries.

Mr Kato said nine years has given Mitsubishi a lot of time to know which are the right cars for the right customers.

"We do not have to invest any more in things which we can see are not important," he said.

The Outlander PHEV, which debuted at the Geneva International Motor Show in March, is the third generation of the class. The vehicle only went through some changes in 2016, three years after its birth.

Two main features of the latest model are the ability to drive farther purely on electricity, what the company calls EV mode, and the co-working of a 13.8 kilowatt-hour battery and a 2.4-litre petrol engine in the battery charging and saving modes.

Compared with the 2.0-litre Outlander PHEV now on sale in England, the 2018 model has a slightly larger engine and is designed to run for up to 45km in EV mode, which is farther than the 33km range of its predecessor.

The battery, which is placed in the middle of the car, works by supplying electricity to two motors that drive the front and rear wheels. The one in the front has a maximum output of 60kW, while the one in the rear has higher output of 70kW.

But according to Mitsubishi, the actual EV range can be lower than the catalogue specifications, depending on speed and the physical conditions of the road.

If car speeds exceed 130kph or electric power almost runs out, the petrol engine will automatically kick in and directly control the wheels. But the battery is still centre stage.

The engine will power the wheels and the battery at the same time, enabling the battery to continue working.

In this mode, "the engine drives and the motor assists", senior manager Ryuichi Kimura, of the Europe-based product planning and market research division, said in reference to the Parallel Hybrid mode technology.

The company also offers Series Hybrid, which turns the engine into a generator supplying electricity to the battery while a car drives or stops.

The 2018 Outlander uses both Parallel and Series technologies in addition to the EV mode and also lets drivers manage the battery themselves, giving them the sense that they, and not just artificial intelligence, are in control.

Drivers can decide whether to charge or save the battery. Charging while driving will level power up to 80% of capacity, while the savings mode will help the battery maintain its power levels.

The Regenerative Brake Controller in the car gear compartment also lets drivers manage the charging. That function is designed to help charge the battery every time a driver brakes.

Instead of having AI do the job automatically, drivers can "fine-tune" the way they slow the vehicle. The higher the level they choose, the higher amount the charge will be.

"I will shift to B3 to help the charging," a mechanical engineer said as the battery level was getting low while test-driving the Outlander near Luberon Massif. 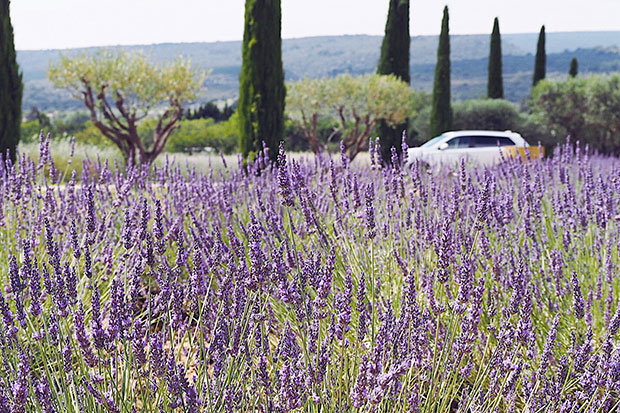 A white Outlander is seen driving past a lavender patch in Saint-Saturnin-les-Apt, Provence.

The car slowed down while a screen on a console suddenly showed electricity flowing to the battery.

Having experience in driving PHEVs of many brands, the engineer, who asked not to be named, graded the Outlander at a very satisfactory level.

But the engineer said there was still more room for PHEV manufacturers to develop EV technologies, as they are moving towards a balance between the battery and other factors. Though a larger battery promises a longer EV range, it comes at a higher price and heavier car weight.

Dealing with PHEVs and cost

Cost and EV knowledge are important to both manufacturers and customers when it comes to the PHEV industry. Mr Kato said many people need to be educated in EV technologies.

"A battery can last for up to eight years if it is carefully used," he said.

EV technology is more friendly for the environment because it emits no carbon dioxide, but people also need to factor the "cost in our lives" when thinking about the price tags on the cars they buy.

The technology and its subsequent maintenance can be considered expensive by some, but battery charging, which requires an average of 4.5 hours per charge from an 220-volt outlet, can help drivers save money.

Driving ahead in Thailand

Mitsubishi is confident that its PHEV technology will make people feel they are getting value for money.

The company said it's determined to produce PHEVs for the Thai market once granted BoI tax privileges, though it has not announced whether it will pick the 2018 Outlander for production.

The firm is considering the right PHEVs for the Thai market and will keep working to educate consumers here on this common but relatively recondite technology.