The seventh-generation saloon has several engines to choose from in global markets, but only the hybrid option is being sold in the country due to tax reasons.

Although the 2.5-litre engine size, e-CVT automatic transmission and hybrid principle are familiar with those in the outgoing model, the new ES300h is claimed to have renewed and improved components in a bid to reduce fuel consumption and CO2 emissions.

The basic 2.5-litre petrol engine produces 178hp – 18hp more than before – achieved at the same 5,700rpm. And when combined with the electric system, the combined power output rises to 218hp.

The more notable improvement comes in the torque department where 221Nm attained between 3,600-4,500rpm; the previous one generates 213Nm at 4,500rpm.

Better energy storage of the nickel metal-hydride battery is said to help improve fuel consumption from some 20kpl to 22kpl. Crucially, excise tax drops from 16% down to 8% as the ES300h now emits no more than 100g/km. 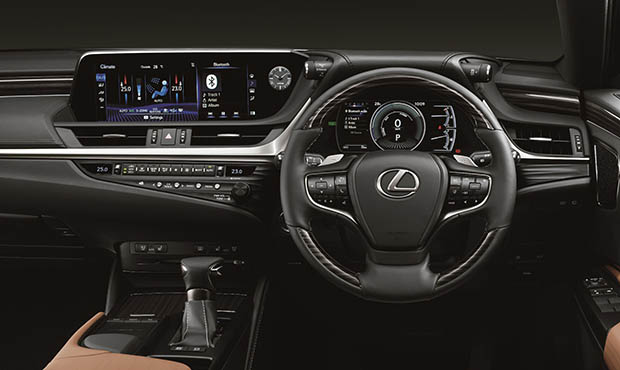 As a result, the front-wheel drive ES300h costs basically the same as before with a starting price of 3.59 million baht in Luxury trim. The other two versions, featuring a host of driver-assist technologies, are Grand Luxury at 3.76 million baht and Premium at 4.19 million baht.

As the ES300h comes with a traditional hybrid with no plug-in facility, it doesn’t have a direct rival.

People at Lexus says the ES300h should appeal to buyers wanting a fuel-efficient alternative to diesel-powered European executive cars and to those who don’t want the additional task of plugging into the wall socket.

The BMW 520d/530e and Mercedes-Benz E350e rear-drivers have marginally higher prices but all below four million baht.