The battery-electric EQC from Mercedes-Benz is quite a compelling new-age SUV. All that’s needed now are class-beating prices in Thailand. 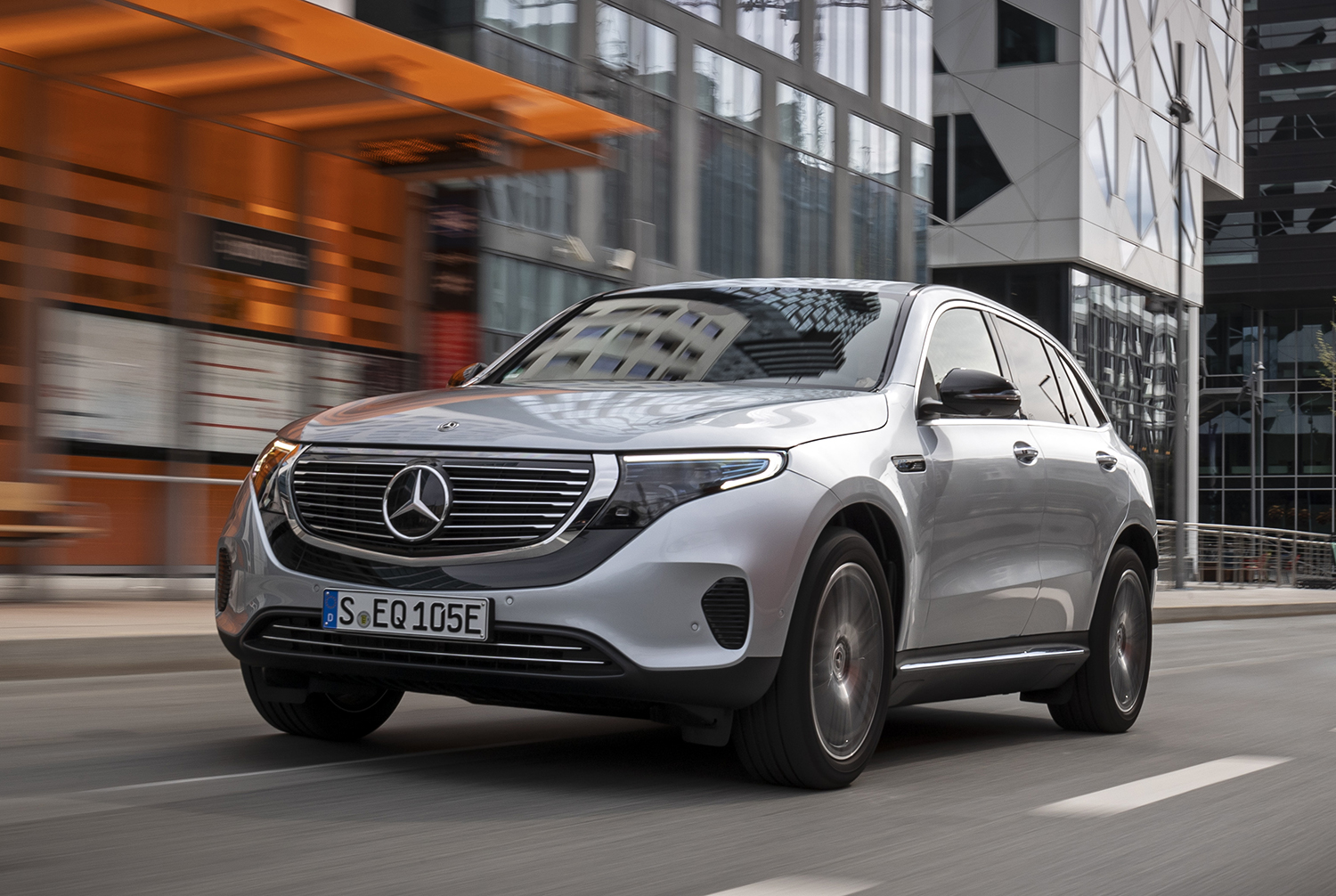 It may have been a coincidence, but all of the new battery-electric vehicles from Audi, Jaguar and Mercedes-Benz introduced this year happen to be based around roughly the same body style and size.

The reason for making the E-tron, I-Pace and EQC as mid-size SUVs is due to the popularity of such a silhouette among luxury car punters who are prepared to convert themselves to new-age powertrains.

Making a BEV big in size would mean issues with weight. At the same time, building anything smaller could probably not help absorb the costs of technologies that are still deemed as relatively new at the moment.

Despite being the size of the combustion-engined GLC, Mercedes’ latest BEV (first for mass production, though, because there used to be the limited production SLS electric supercar) isn’t as cheap as one might expect it to be.

Although the EQC has yet to launch in Thailand, it would cost about the same as the circa-5 million baht E-tron and I-Pace when it goes on sale toward the end of this year.

Even though BEVs enjoy low excise taxation in the country, they face the 80% import duty explaining why their retail prices are still hilariously high when compared with those in markets with sensible duties.

Mercedes hopes to counter this with the availability of a new Thai battery assembly facility and rejigged vehicle production lines that are now flexible enough to make the EQC alongside other conventionally powered Benzes.

Pricing for the EQC in Thai-finished form isn’t confirmed yet, although one can expect to put aside some four million baht. It will still be an expensive car because not all parts are produced locally. 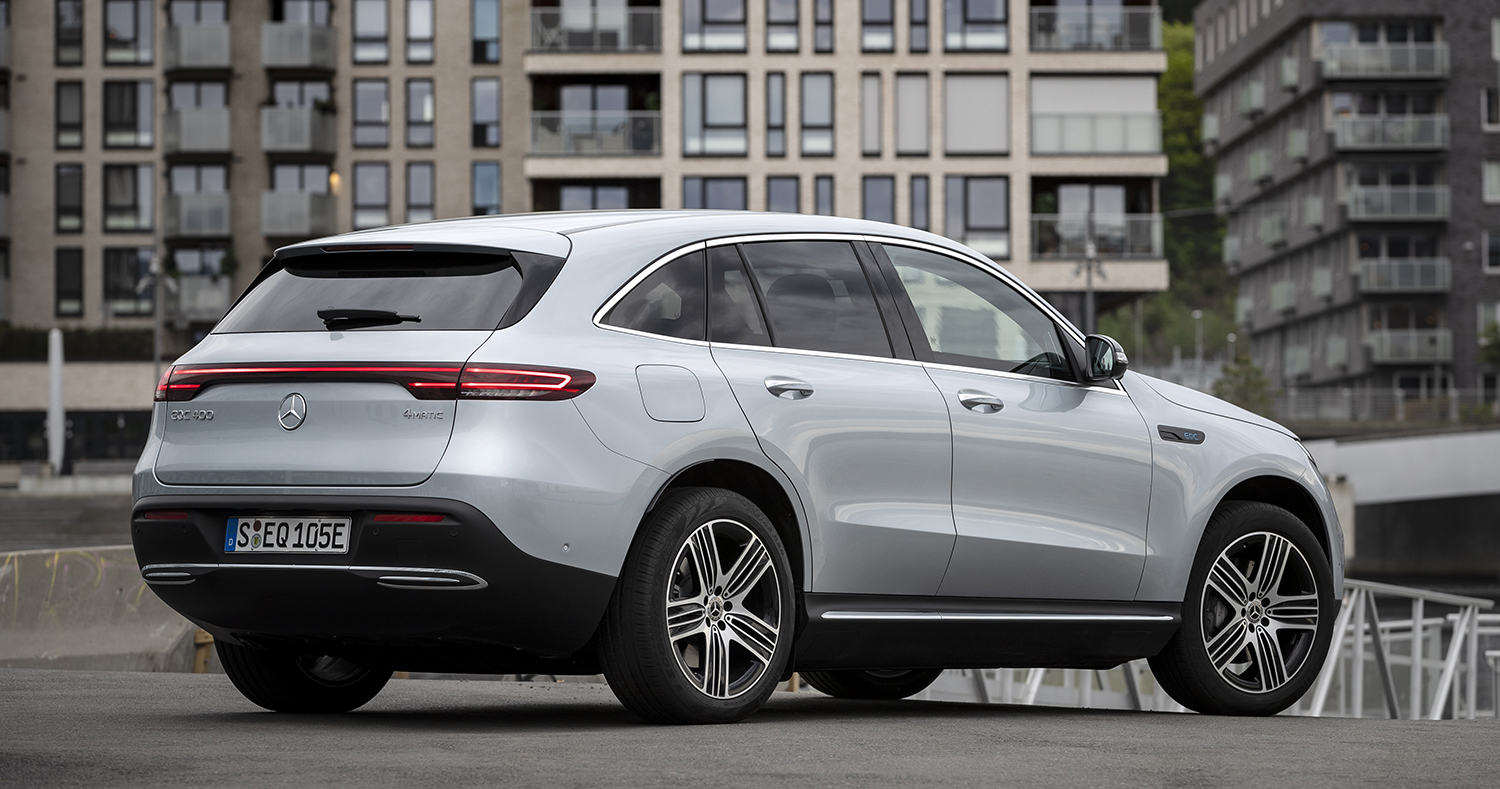 Pricing aside, can potential buyers conveniently shun the GLC and happily embrace the EQC notion? After a first drive with it in BEV-friendly Norway this week, the answer is probably yes.

Take its design as an example. The EQC has a distinctive nose penned for aero efficiency with a side profile falling in between the regular GLC and sportier GLC Coupe.

However, the EQC has a more dynamic stance thanks to a lower ride height granting itself more of a crossover than SUV look in industry speak. The EQC also has two faces to choose from: a standard one and AMG variation, as pictured below, which should spearhead EQC sales in Thailand initially. The interior, meanwhile, shouldn’t alienate current Merc owners. There’s the usual digital widescreen running across the driver’s cockpit. The dashboard structure is slightly different from other Mercs and has been furnished with exquisite details and materials.

Space-wise, the EQC is nearly GLC fanfare with ample room for five persons and their belongings. Packaging the battery pack neatly beneath the cabin floor helps for familiar practicality and versatility people can come to expect of. 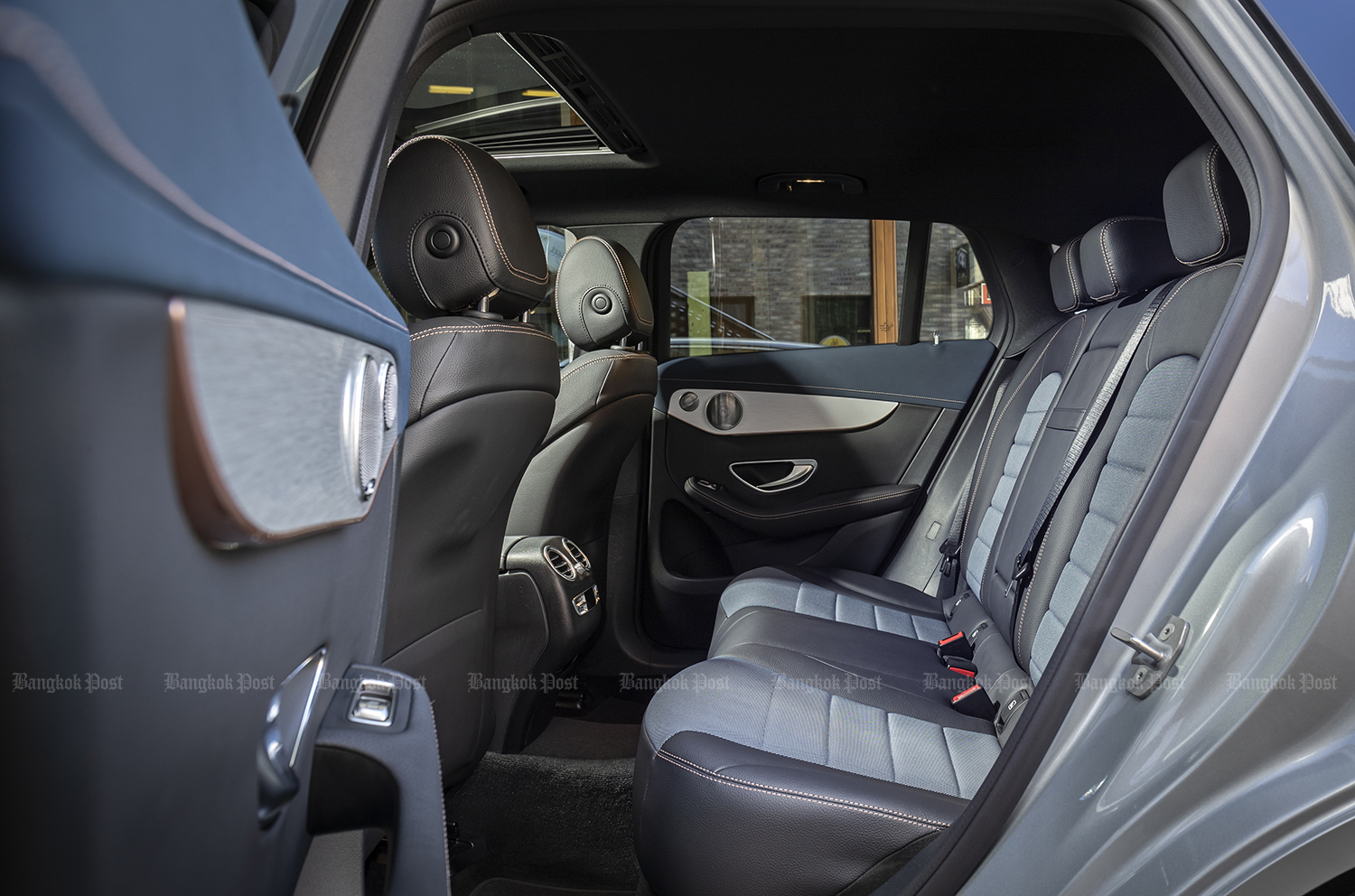 The EQC’s technical credentials are very similar with those found in the Audi and Jag BEVs, that is, some 400hp of electric power (hence the EQC400 badge), all-wheel drive for balanced handling and optimum grip and near-500km of driving range when measured in NEDC mode.

As expected, the EQC is never lacking in real-world punch. In fact, there’s so much of it that drivers can exploit in a fun and confidence-inspiring manner. No wonder they say that once buyers have fallen for BEVs, combustion-engined cars will hardly, or never, be on their minds again.

Just like in any other Mercs, the EQC can be made sportier on the move by using the familiar drive-mode selector. But you really need to be a speed freak to engage in the most aggressive setting since the EQC is already powerful in its normal mood. 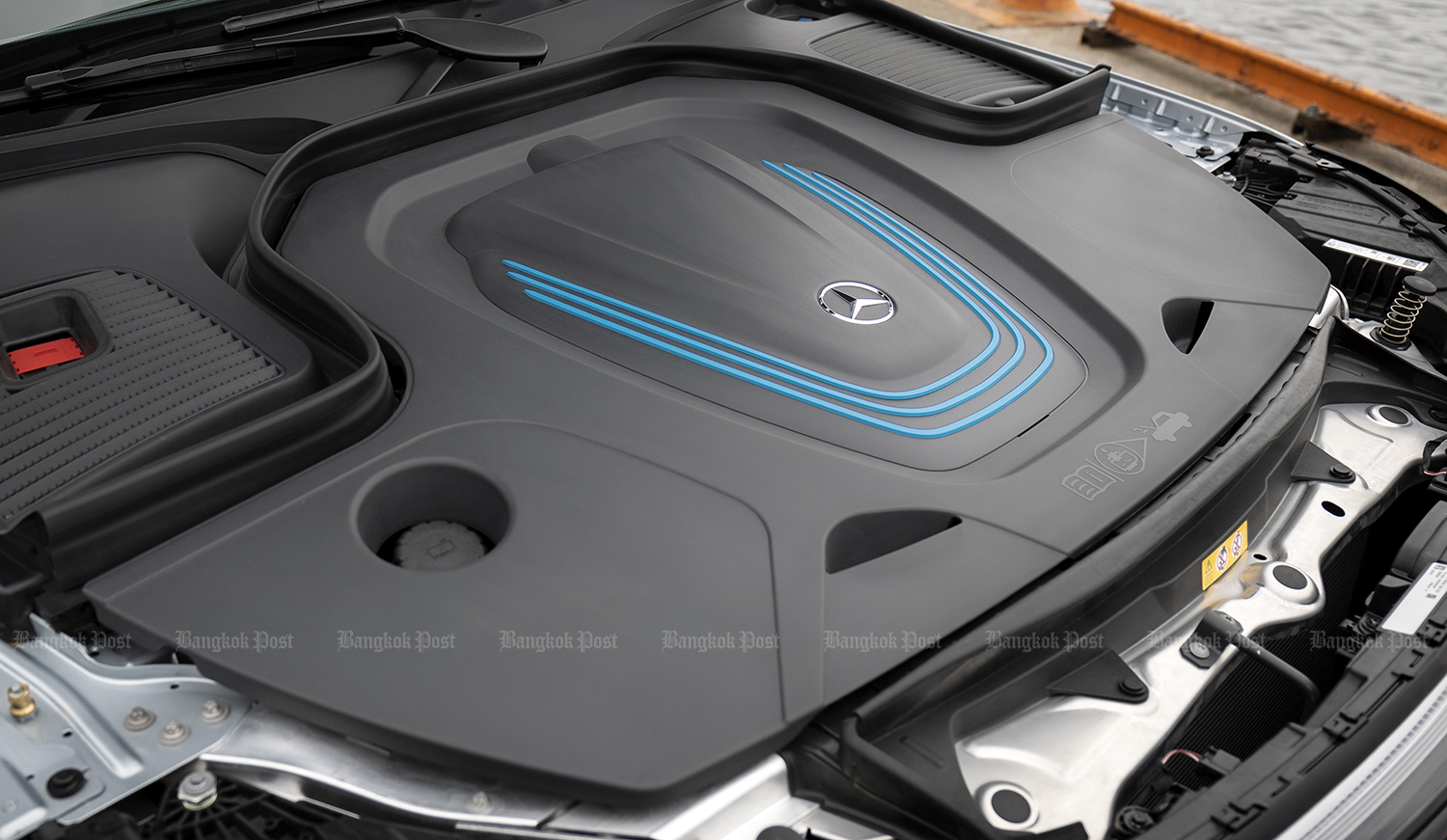 The same goes for other parameters like that for the steering. Of course, choice is never a bad thing. But the EQC simply does a good and satisfying job once you roll away without presetting anything. You can adjust the level of energy recuperation from braking which also helps for automatic retardation upon lifting off the throttle.

Given that powertrains of BEVs are so quiet and vibration-free, other noises tend to easily become pronounced in the cabin. But this isn’t the case for the EQC which is to say that cruising refinement is excellent.

For the enthusiastic driver, though, the EQC’s porky weight can sometimes be felt. Even so, it doesn’t really blunt the overall driving manners, which are quite good for a BEV. The handling balance of the EQC in corners is quite neat, too.

As said earlier, the use of four driven wheels helps for an assuring driving experience, as well. It’s not for the sake of enhanced off-road ability but for optimum road-holding. Let’s not forget that high-riding SUVs yield merits of good driving view but at the expense of a relatively high centre of gravity. Bar the entry-level and more price-sensitive GLA, all of Mercedes’ other SUVs are all-wheel drive. 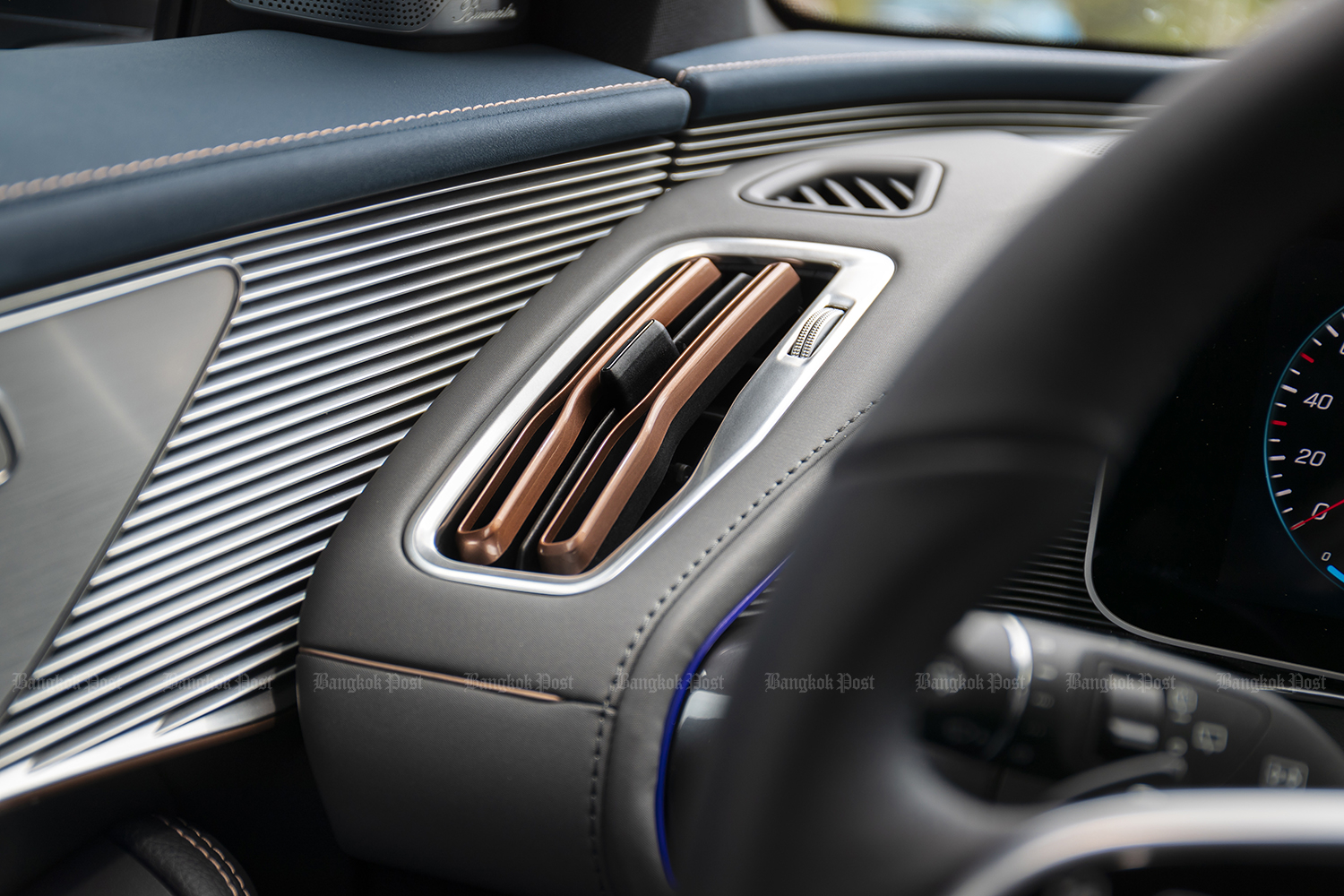 Living up to its new-age bill is a raft of driving aids that have higher levels of autonomy than in other Mercs. The EQC also has the brand’s latest infotainment and voice control system, connectivity and app-based functions operable via smartphone. New-gen buyers should certainly like these.

Make it like this. If you happen to need an SUV with genuine recreational abilities for upcountry driving, a diesel-powered GLC is probably still the best solution. However, if your commute is mostly in the urban jungle (which is quite the case for many people these days), the EQC is an enticing proposition.

Over to you now, Mercedes-Benz, for how to price it rightly so that well-heeled buyers can comfortably make the shift from ICE-powered cars to BEV alternatives. 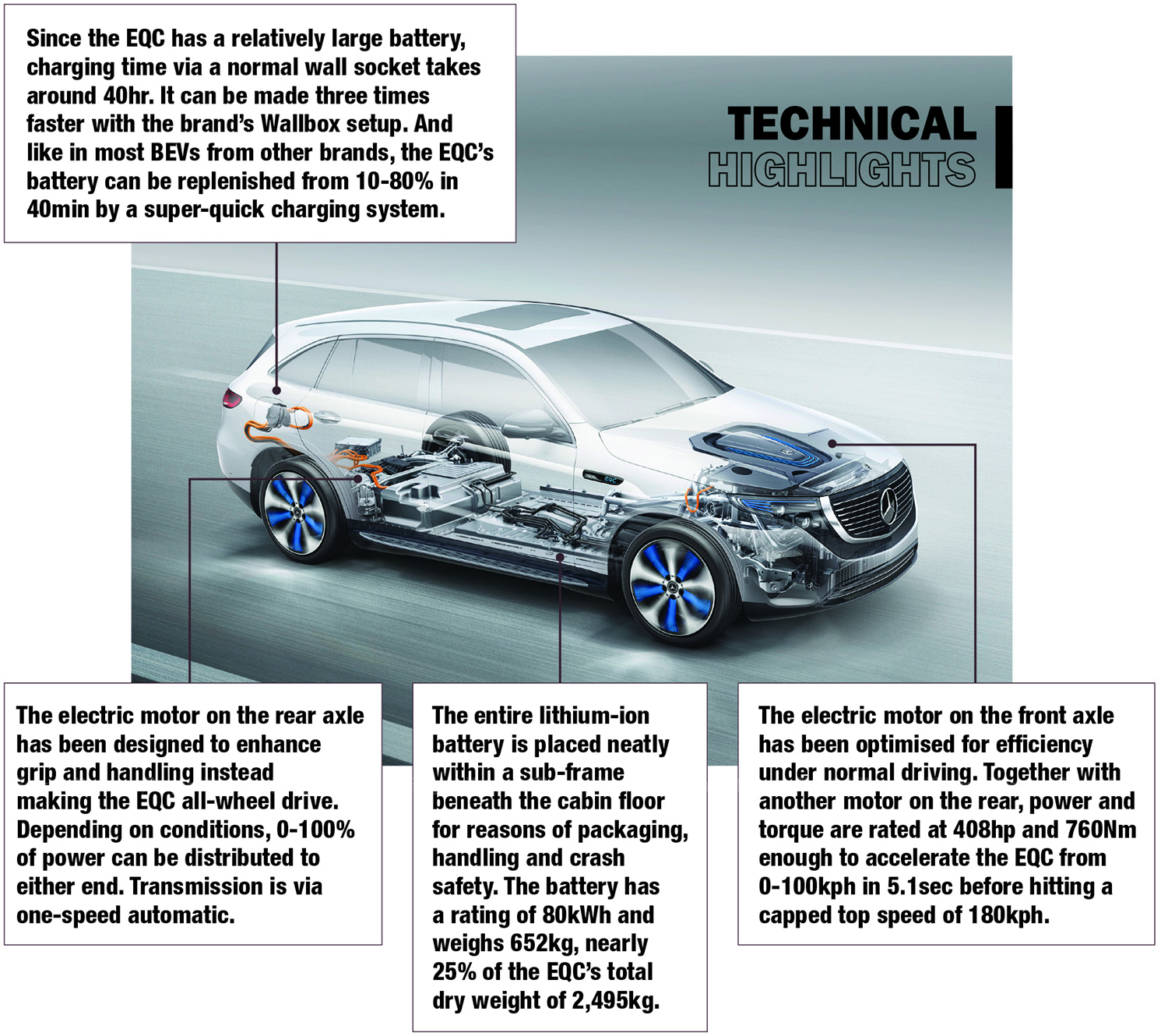 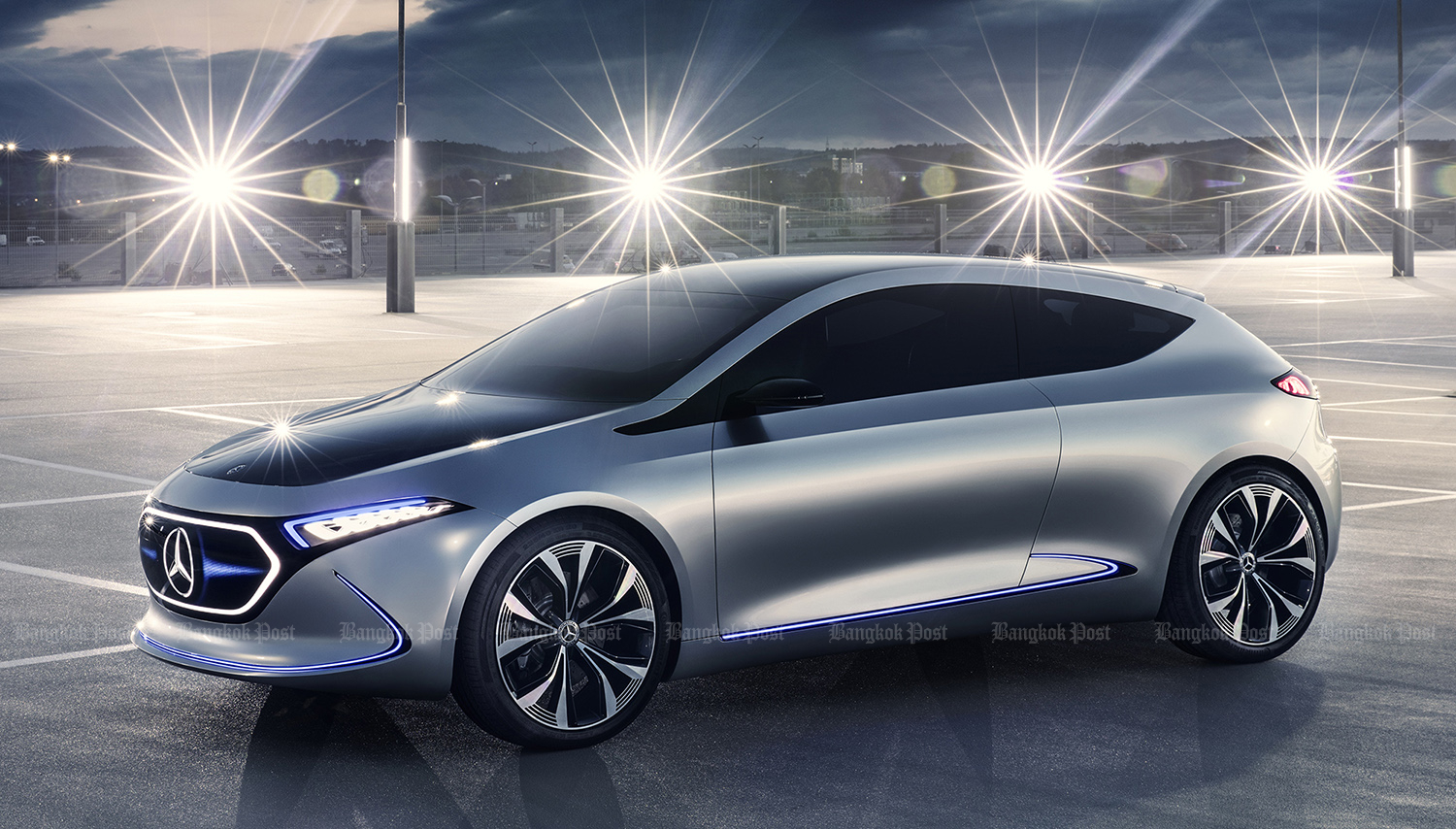 Following the EQC mid-size SUV, the next all-electric Mercedes-Benz is set to be a compact hatchback.

Dubbed EQA and shown initially as a three-door concept in 2017, the production-ready model is most likely to morph into five-door hatchback.

Due to premiere at the Frankfurt motor show in September, the EQA will be aimed at punters of the BMW i3.

Also planned for the German auto event is the showroom-ready battery-electric vehicle from Volkswagen. The Golf-sized hatchback’s name has been confirmed as ID.3.

As sales of SUVs continue to rise on a global basis, the just-revealed GLB is set to spawn a BEV version to be called EQB. Apart from Germany, China and the US have been confirmed to house production facilities for all-electric SUVs.

A luxurious BEV has also been hinted for worldwide sales. Although no specific model was mentioned, sources have pointed to the next-generation S-Class as providing the basis for a potentially badged EQS.

Mercedes-Benz hopes to capture the new generation of car buyers with a variety of body styles, all sharing the basic electrical bits. Other models in the pipeline include EQE and EQV, the latter based on the V-Class people-carrier and already previewed in concept form earlier this year.

Audi, BMW and VW are also gearing up for a slew of BEVs covering various segments of the luxury car market first triggered by Tesla.

The American BEV specialist has five models so far, some of them yet to reach production. There’s the Model X and Y SUVs, plus Model S and 3 sedans. The super-quick Roadster is due next year.