A league of their own
Auto
News

A league of their own

The 38th Motor Expo during Covid-19 in Thailand may not be as colourful as before, but it is nice to see most of the country's great motorcycle brands participating in the event and putting on a great show for motorcycle fans.

It is never easy to choose 10 outstanding models from the show because they are not designed to be compared. I will pick the ones I like best from the show and explain why in the personal angle.

This is neither right nor wrong, but it must be new models and certainly entertaining. 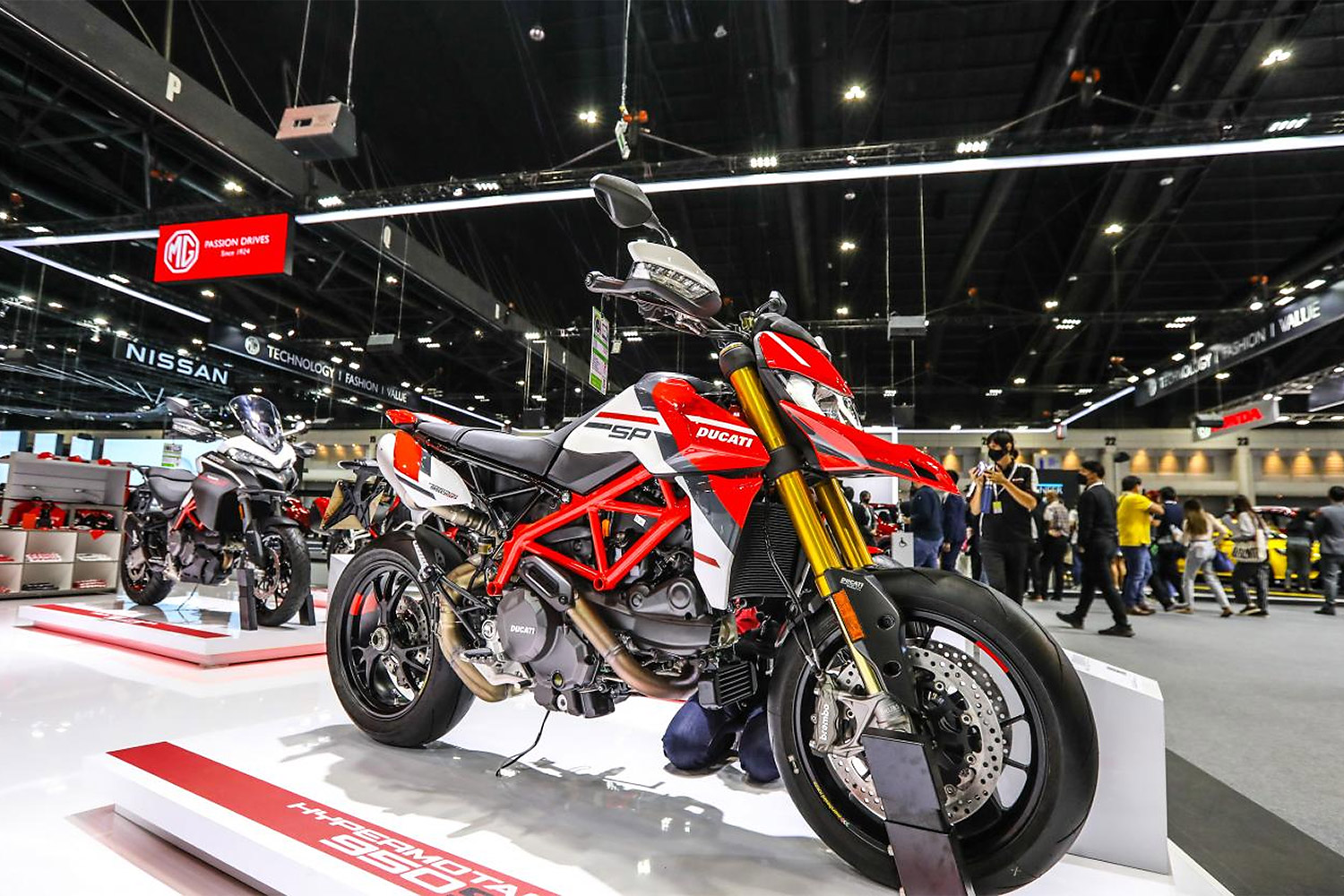 The Hypermotard is Ducati's iconic model, and the 950 SP uses the same engine as the regular model but with suspension upgrades to fully adjustable front forks and Ohlins rear shocks. This will undoubtedly be faster, not just because of the engine, but because of the improved suspension. I give SP a class on its own and a reasonable price. 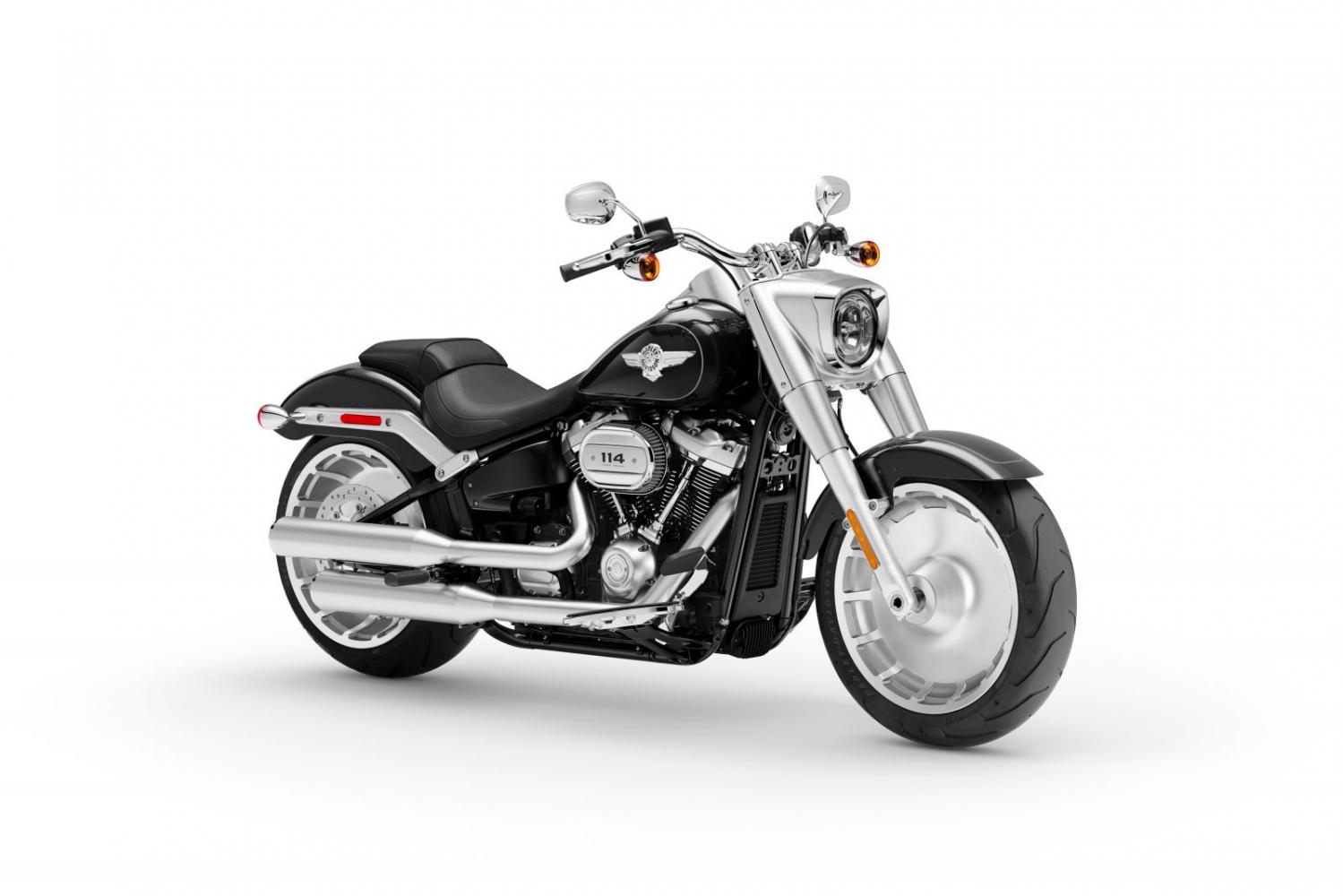 The Sportster S and Pan America are the most visually appealing Harley-Davidson models, but the Fat Boy is the most attractive model due to the size of the rear tyre. This is a model you'll be proud to show off to your friends. I like the powerful 114 Qubic Inc in a classic design body but built with advanced technology. It is very easy to ride, even when carrying 300kg. The centre of gravity is just right, and riding with a rear tire size of 160/60/R18 appears to be no problem at all. This boy has a lot of muscle.

Yamaha is a design-oriented company. The majority of the models on display at Yamaha's booth are extremely well-built. From superbikes with WSBK technologies, such as the R1, to serious adventure riders with good skills who will opt for the Tenere T7 but nothing else. 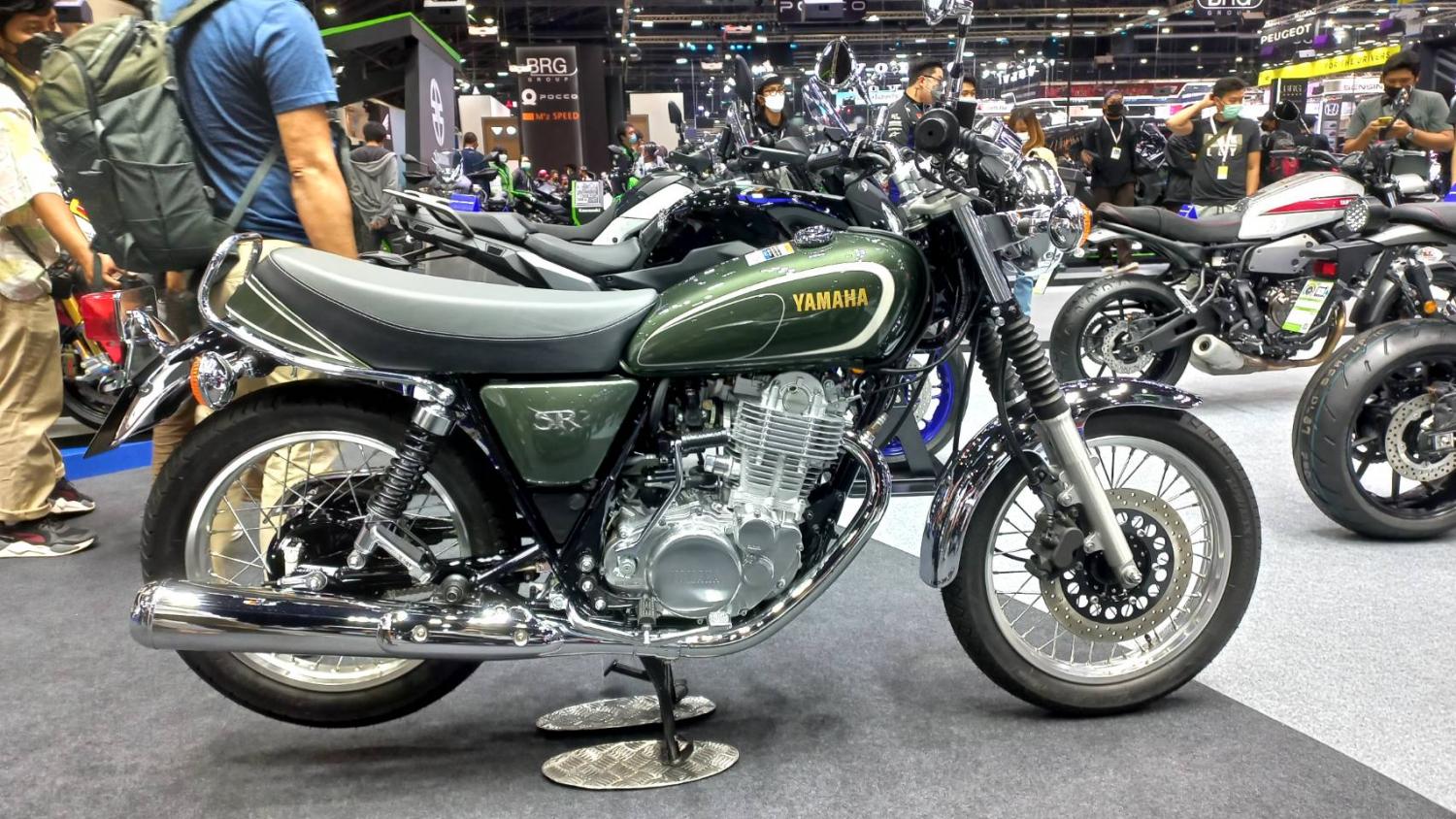 There are numerous track, road, and offroad models available. There is one SR400 placed in the middle of a fantastic line-up for the future. The SR400, on the other hand, has been standing firm for 35 years and has never changed. This is the captain of Yamaha, in my opinion. The success story of the world's largest single-engine. The design form is perfect. Technology that is not permitted to be installed because it is intended to create a relationship between man and machine. The SR 400 refused to have an electric starter because showing how to use a kick start is an art form in motorcycle riding. As well as ABS, which is probably unnecessary given the engine's laid-back attitude. The SR 400 may not be the most advanced motorcycle in the show, but it is unquestionably the most respectable. 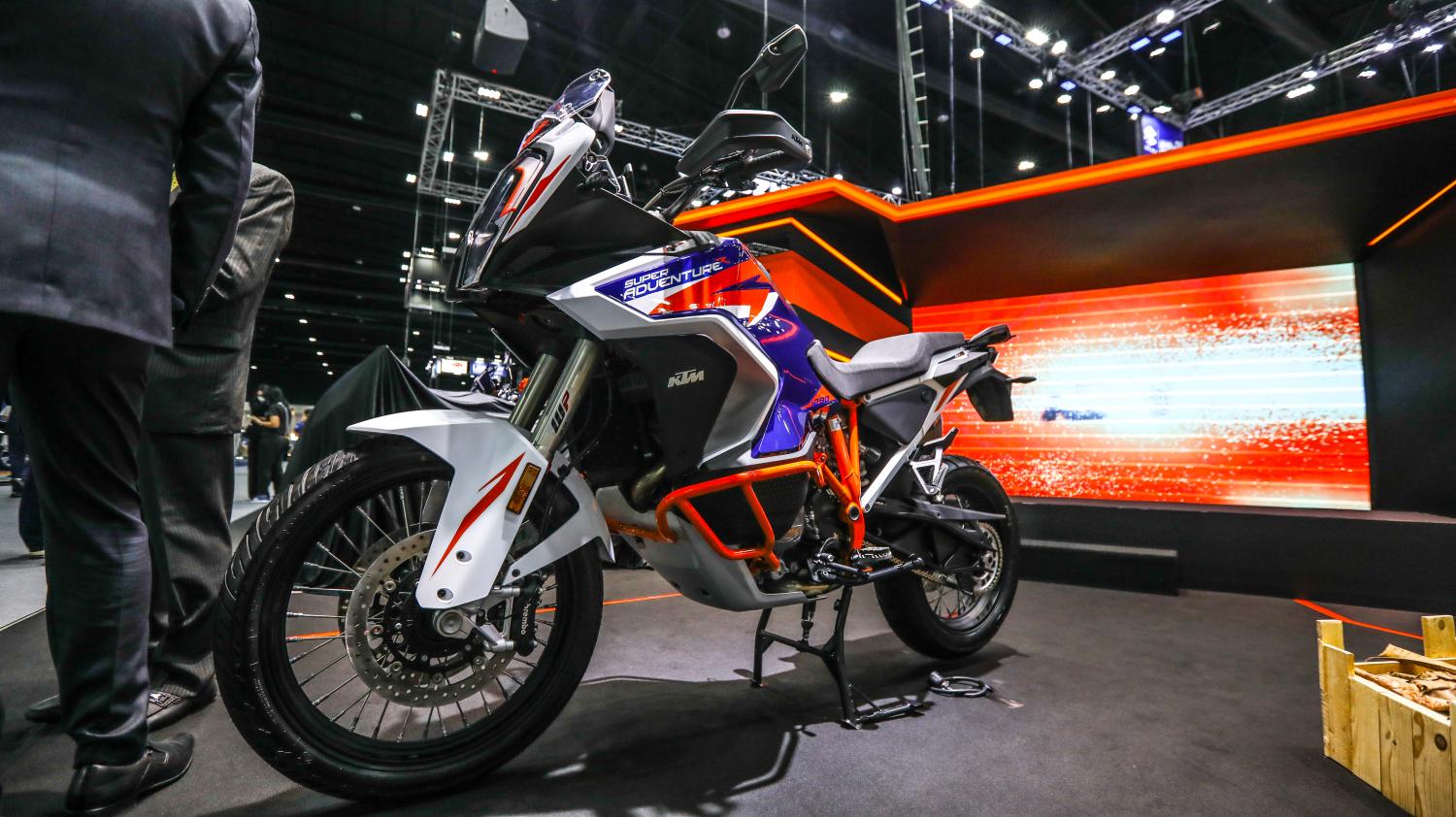 "Super Adventure" means the name is self-explanatory. The king of adventure motorcycle. Powerful, light, and loaded with KTM My Ride, the most advanced communication and navigation systems available. The adjustable angle on the 7" TFT screen is an important addition. Quick shifter up and down is installed by the factory. Non-electronic but fully adjustable WP suspension is a good choice because whoever buys this bike intends to go rough and far with few or no hassles. 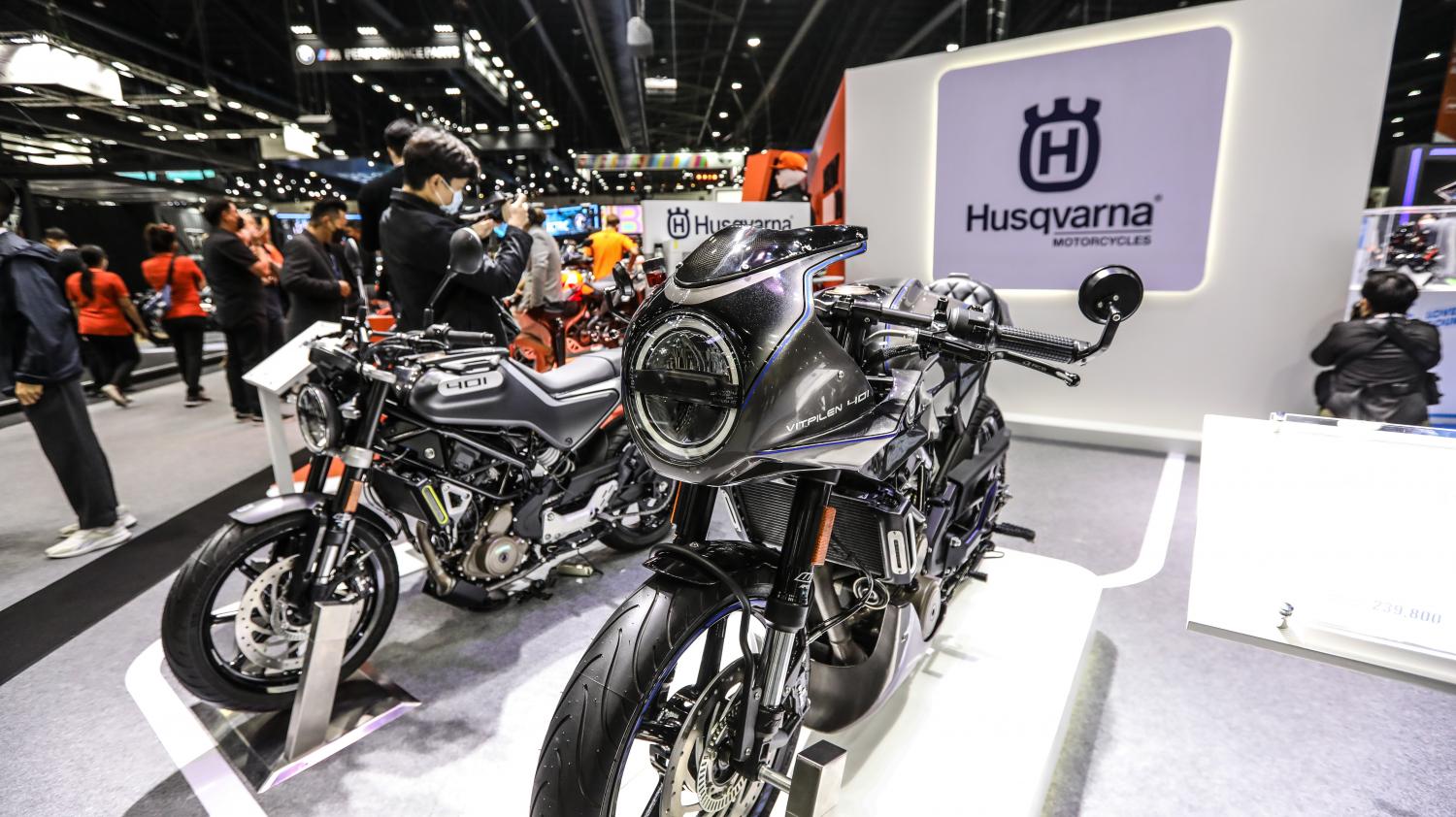 Svartpilen, or "Black Arrow", is a design-oriented character. It is very unique, and Husqvarna is doing an excellent job of marking a new direction with its new corporate identity design. Since everyone knows that KTM and Husqvarna are under the same roof, engine development is taking place on the same platform but with a different body. Svartpilen is a scrambler with an increased handlebar, a more upright riding position, and all-terrain tires, compared to its brother "Vitpilen", which is a café racer. If you own one of these, you may want to consider purchasing new riding gear to match the design of the bike. 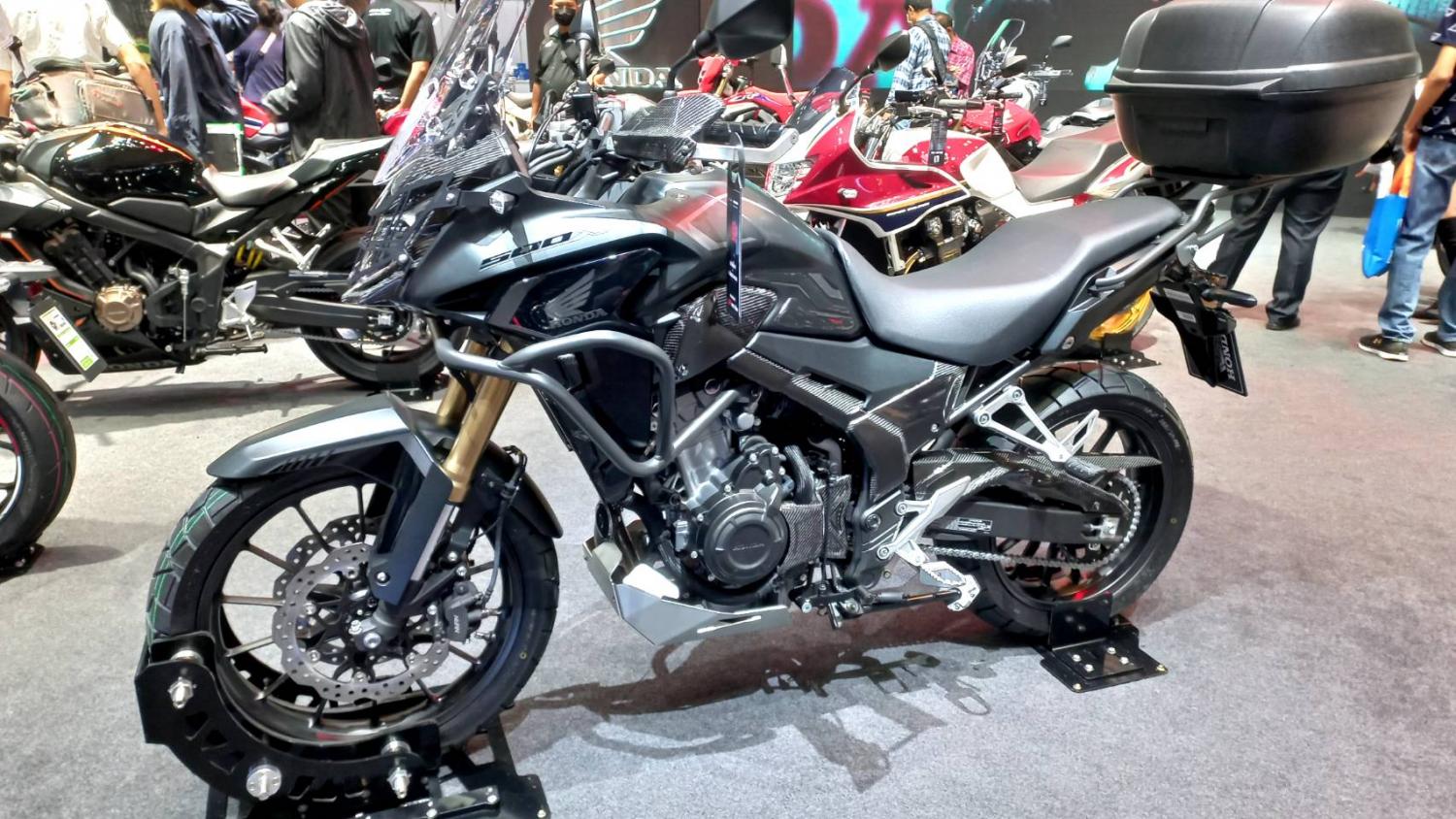 The Honda CB 500X will make you happy. With a reasonable price tag, the 500cc two-cylinder engine is very smooth on and off the road. It's not an adventure bike, so don't try too hard on rough terrain. The new factory suspension has received praise for its improved overall handling. If you're looking for a model that can be used every day and easily transported on a 3,000km trip, this is it. 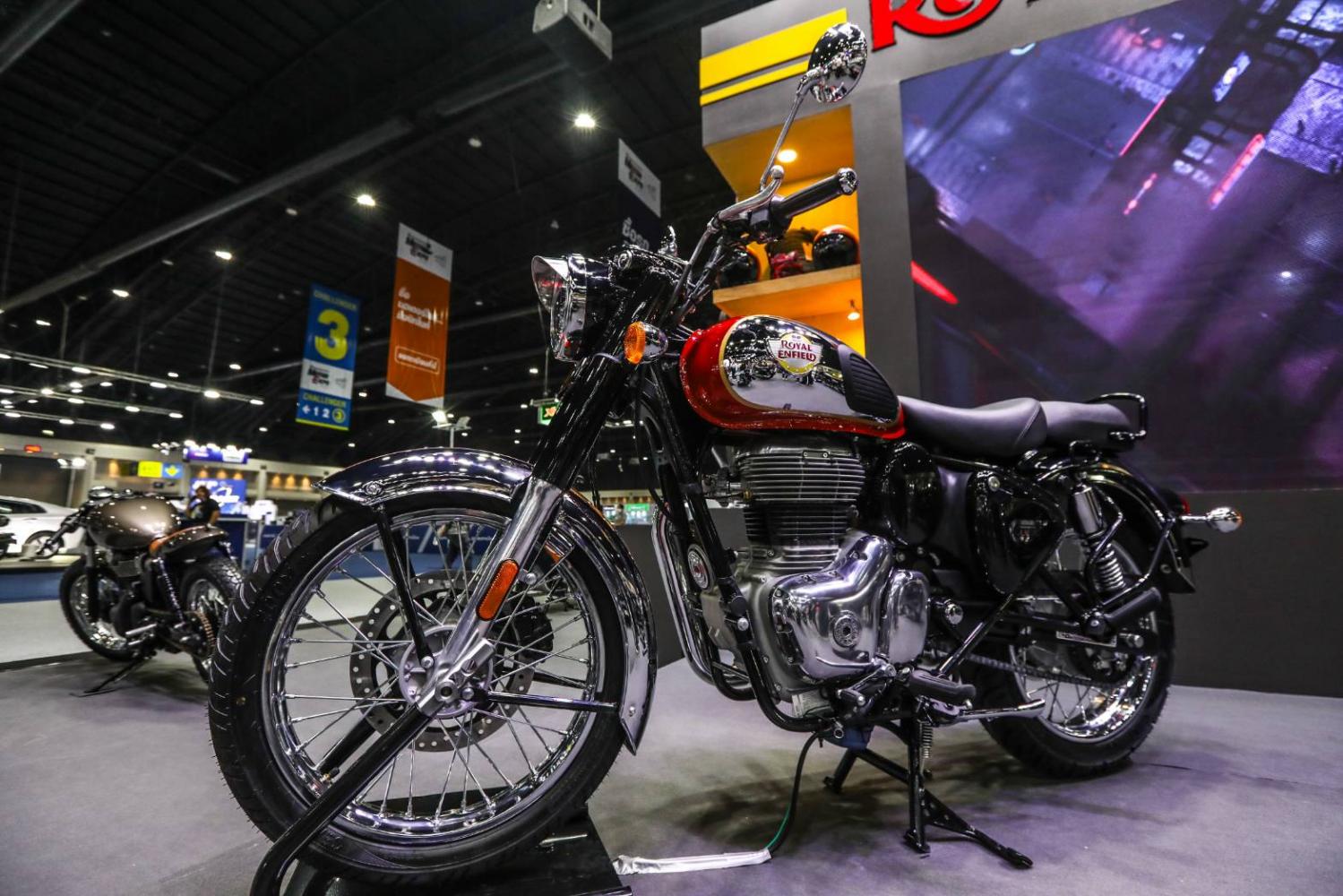 The Royal Enfield Classic is a brand icon. Following the discontinuation of the 500 series due to the arrival of the Twin 650, Royal Enfield pioneered the 350cc engine platform with the 350 Meteor, which was followed by this beautiful 350 Classic. This new single-cylinder engine is smooth and powerful. It retains its classic appearance while incorporating cutting-edge technology. If you prefer a classic look with a modern riding setup and aren't concerned with speed, this is your path. 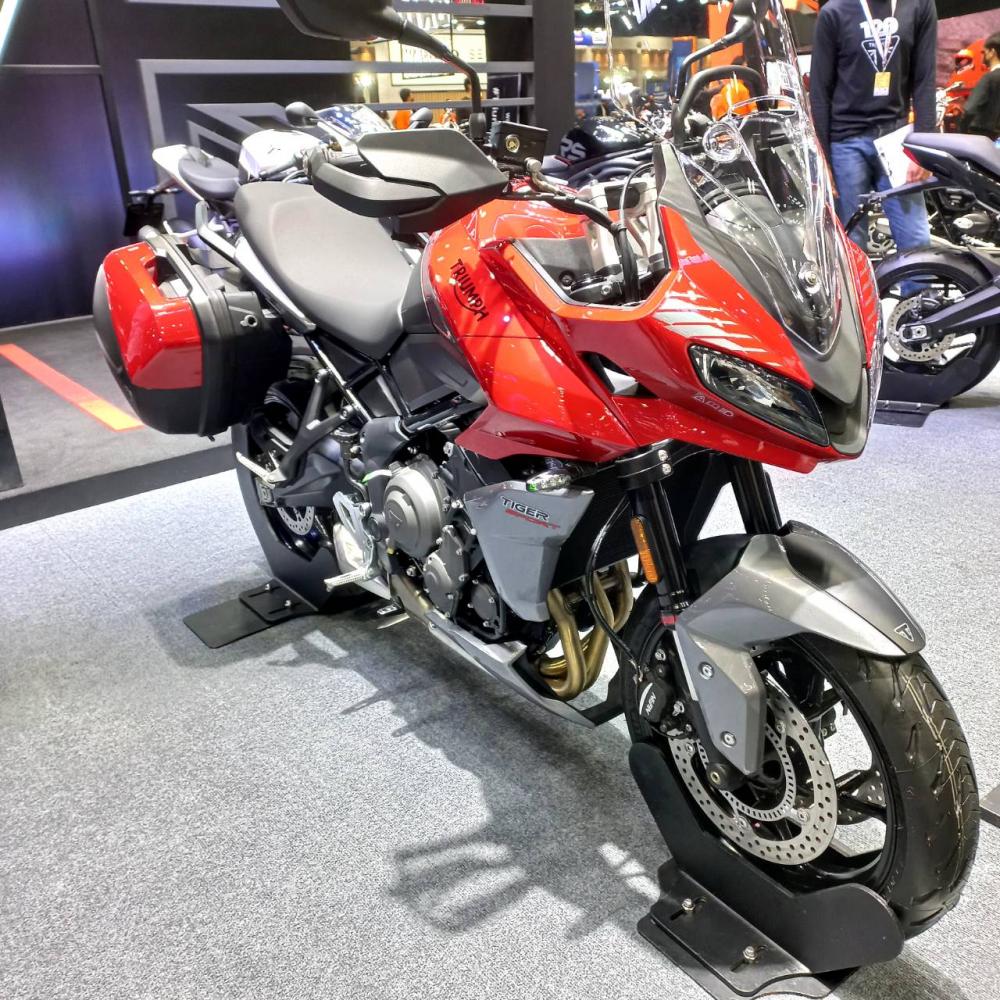 Triumph introduced the new Tiger 660, which features a three-cylinder engine. It may not have outstanding style, but the 600 class should be fun to ride. The power is more than 500 series. Revving the rpm up to 10,000 with that sweet sound creates an absolutely enjoyable feeling for the rider. This is not an adventure bike, but rather a sport-touring model that suits the Thai market. Powered by the same engine platform as the Trident 660, I can assure you that this is a small pocket rocket in the medium class of motorcycles. 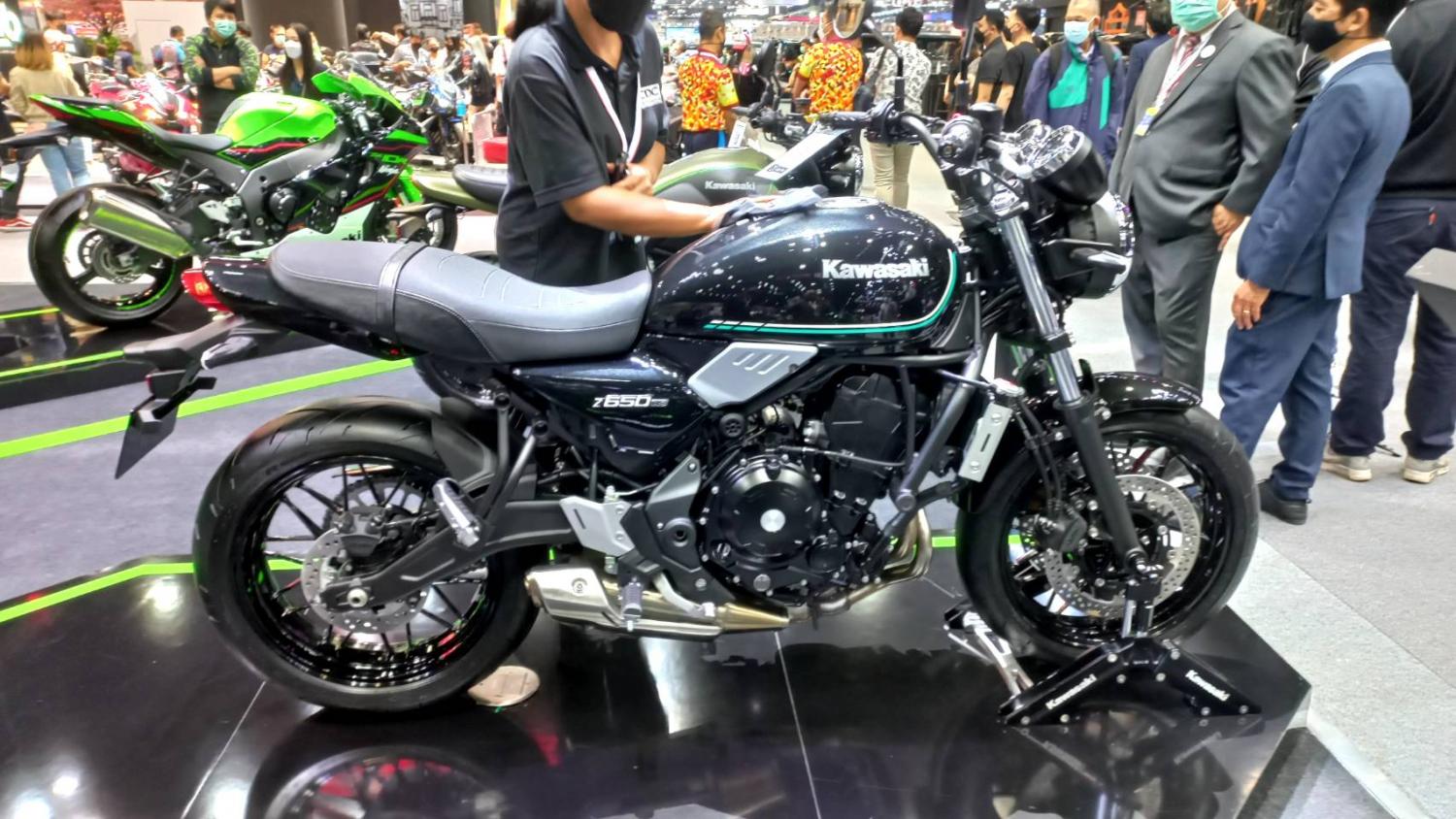 Kawasaki's Z 650 RS, among other models, was recently introduced at the Motor Expo. The Z 650 RS's retro sport design with two 650cc cylinders rather than four cylinders means that it is designed to deliver more torque at lower rpm. There's also a slipper clutch included. In this model, top speed is not a priority. The Z 650 RS is imported from Japan. 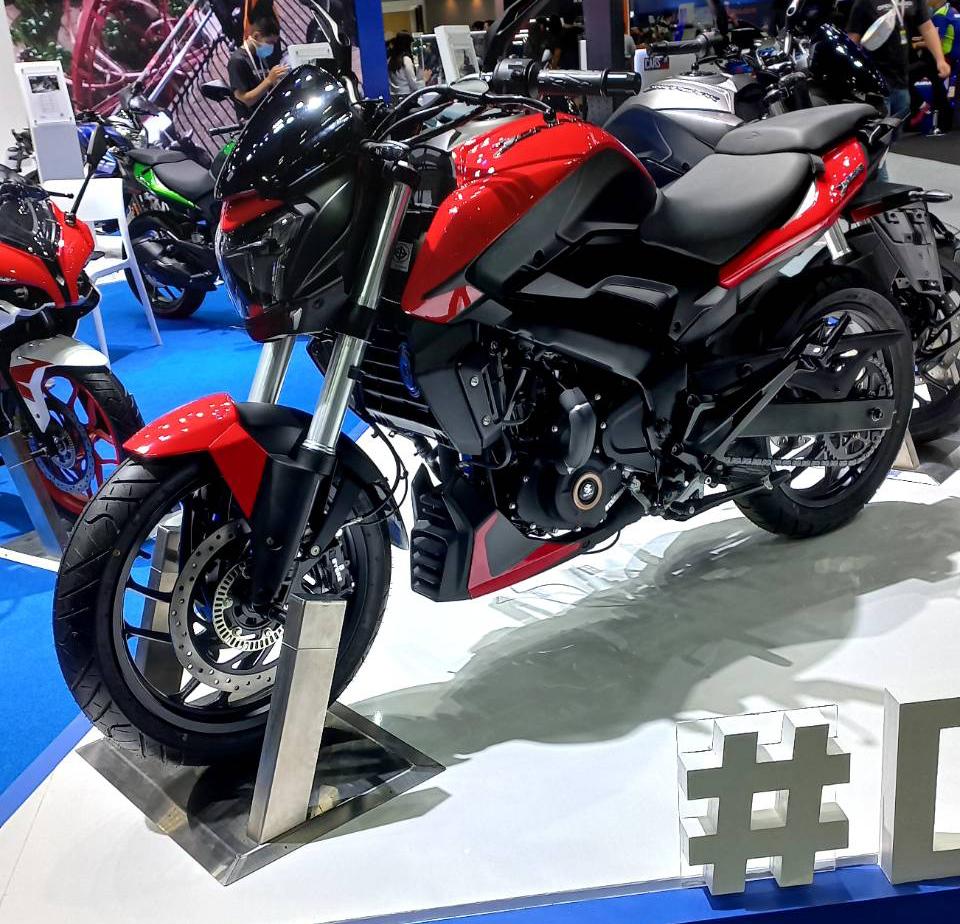 The Dominar 250 is unbeatable with its price tag and quality. The KTM Duke 250cc engine is my favourite among the 200, 250, and 390cc engines, and it is the heart of the Bajaj Dominar 250. This small engine pushed the Dominar to a top speed of about 170kph. The Dominar is a design for everyday use and is well-known for naked touring. The bike is relatively cheap to buy. Parts are inexpensive to replace. Riding a Bajaj is more like being carefree and focusing on the beauty of the landscapes.

Mask requirements in Bangkok may be reconsidered following the government’s decision to revoke the emergency decree on Covid-19, according to city governor Chadchart Sittipunt.

Police in Laos have made their third-biggest single seizure of illegal drugs by netting 33 million methamphetamine pills, a United Nations official said on Saturday.