Flooding affected domestic car sales in October, with volume decreasing in many categories, but the drop will not cause Thailand's car manufacturing to fall short of its 2022 target, says the Federation of Thai Industries (FTI).

Car sales managed to increase by 0.24% year-on-year to 64,618 units in October, said Surapong Paisitpatanapong, vice-chairman and spokesman for the FTI's Automotive Industry Club.

Looking at the October figures, Mr Surapong said the sales decrease resulted from the floods, especially those upcountry, but in some categories like pickup passenger vehicles, the volume went up by 28.4% from the same period last year.

"They can drive through floods," he said. 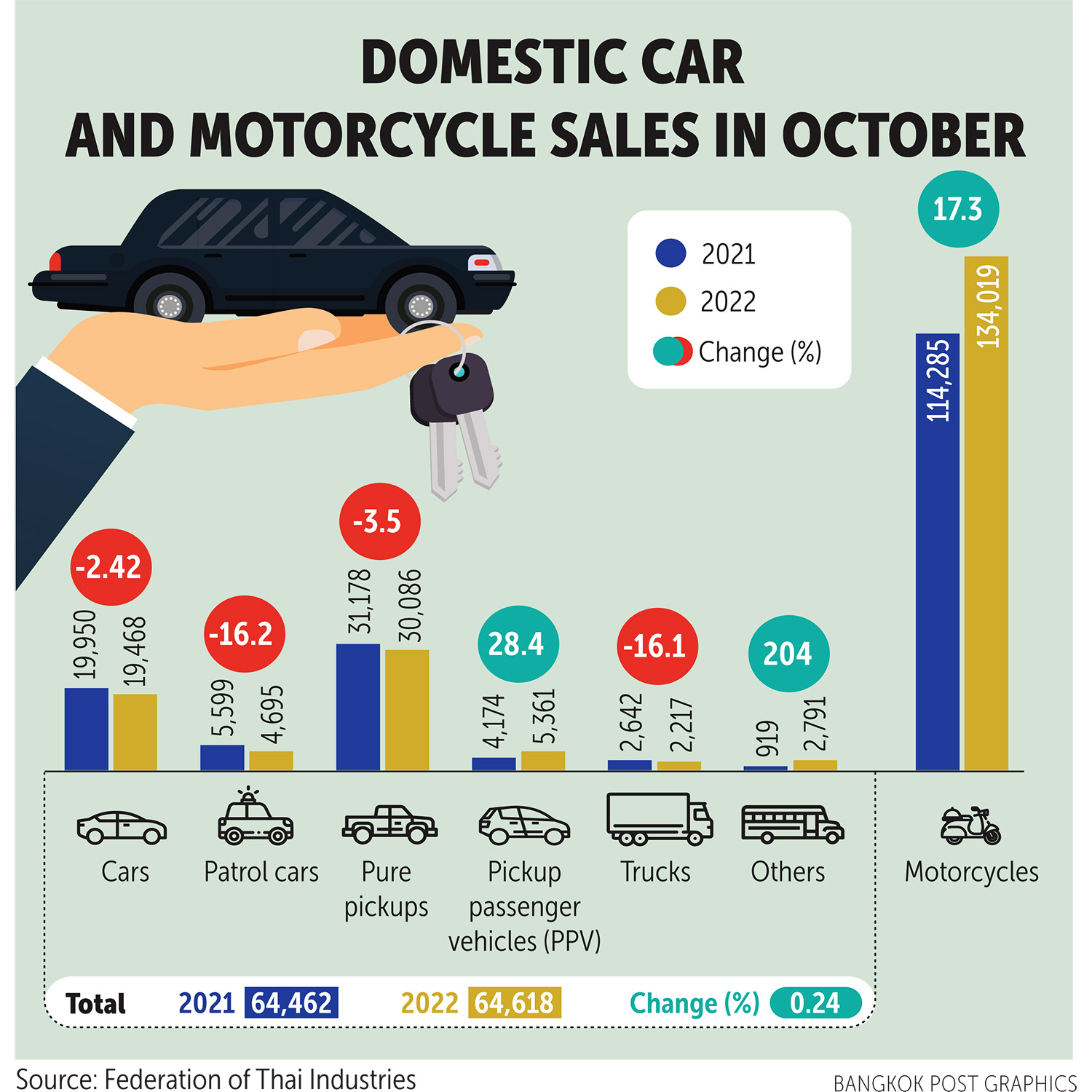 In October, sales of vehicles listed under the "others" category also increased dramatically by 204% year-on-year. The rise was attributed to strong sales of commercial vans, said Mr Surapong.

These figures made the club confident Thailand can reach its car manufacturing target of 1.75 million units this year.

The target was downgraded from an earlier prediction of 1.8 million units, as the Russia-Ukraine war worsened the prolonged global semiconductor shortage because the two countries are major exporters of neon gas, a key material in chip production.

Under the new target, car production for export is expected to decline from 1 million to 900,000, while manufacturing for the domestic market is projected to rise from 800,000 to 850,000 units this year. During the first 10 months of this year, car manufacturing tallied 1.53 million units, a 12% increase from the same period in 2021.

More semiconductors were supplied to automakers in September and October. If there is no serious chip shortage in the remaining two months of this year, the 2022 target is attainable, said Mr Surapong.

In the electric vehicle (EV) segment, growth momentum continued in October as the number of newly registered battery EVs soared by 289% year-on-year, hybrid EVs increased by 122% and plug-in hybrid EVs rose 84.9%, according to the Department of Land Transport.

In a related story, the Automotive Industry Club joined with nine car manufacturers to offer maintenance services, with discounts on engine oil and spare parts, to encourage motorists to have their cars checked in a push to reduce PM2.5 ultra-fine dust emitted from ageing cars.

"We hope this will lead to cleaner air," said club chair Yuphin Boonsirichan.