Vinfast EV cars are seen during a car shipment to the United States in Haiphong city, Vietnam, on Nov 25, 2022. (Photo: Bloomberg)

HANOI: VinFast, an electric carmaker backed by Vietnam’s richest man trying to take on Elon Musk’s Tesla Inc, has filed for an initial public offering in the United States just as it prepares to deliver its first sport utility vehicles (SUVs) to California customers later this month.

The unit of conglomerate Vingroup JSC, founded by Pham Nhat Vuong, is being advised by banks including JPMorgan Chase & Co, Citigroup Inc, Credit Suisse Group AG and Morgan Stanley, according to an F-1 filing with the US Securities and Exchange Commission. The shares will trade under the symbol VFS on the Nasdaq Global Select Market. There were no details provided on the size of the fundraising or a possible listing date.

Shares of Vingroup rose as much as 5.7% to a 5-month high Wednesday morning. The benchmark VN Index is up as much as 1.1%

VinFast’s IPO plans have been percolating for almost two years. Bloomberg News first reported in early 2021 that Vingroup was considering a US$2 billion US IPO for the electric vehicle (EV) maker. The company in April filed confidentially for the share sale. VinFast could raise at least $1 billion from an offering as soon as January, Bloomberg reported.

The numbers presented by the company suggest its tough road ahead. VinFast lost $1.3 billion in 2021 and endured losses close to $1.5 billion in the nine months to September this year. As of September, its owners and lenders had invested about $7.5 billion to fund operating expenses and capital expenditures.

While VinFast aims to make and sell around 1 million electric cars within five to six years, it has sold a small fraction of this so far. The company plans to expand its global production capacity to as much as 1.1 million vehicles per year by 2026, according to the prospectus.

VinFast’s additional capital requirements could be funded by additional debt and equity financing, which may include financing from related parties, it said. VinFast expects to continue to incur losses in the near term as it scales production, establishes manufacturing operations and expands marketing, sales and service networks outside of Vietnam, according to the filing.

"We understand that our company valuation or the size of our IPO will be subject, in part, to market conditions,” she said. “Once VinFast successfully lists in the US, this will facilitate future access to the capital markets for the company, and further support VinFast’s global expansion." 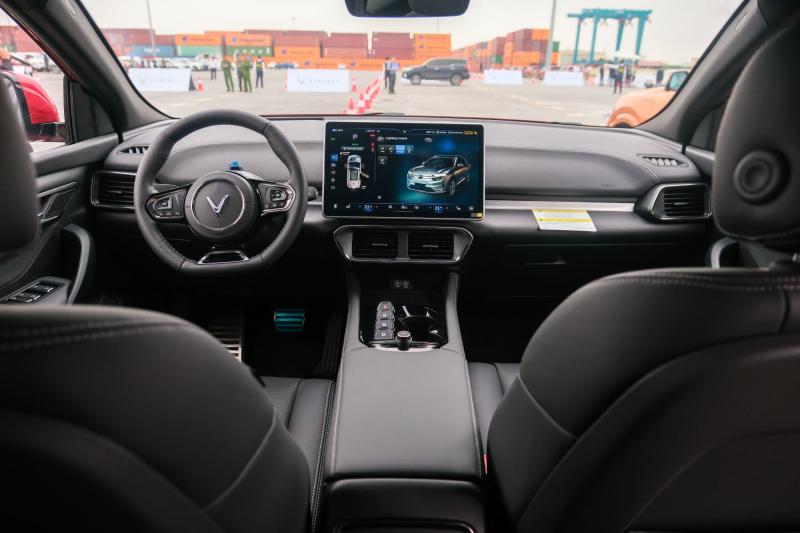 Interior of an VinFast LLC's VF8 electric vehicle bound for shipment for export at a port in Haiphong, Vietnam, on Nov 25, 2022. (Photo: Bloomberg)

Shares of Rivian Automotive Inc - the electric pickup-truck maker - are now trading for around $28, down about 64% from its initial public offering price, and has a market value of about $26 billion. Tesla is now trading at $179.82, valuing the company at about $567.8 billion.

The IPO could be the biggest by a Vietnamese company since Vinhomes JSC’s $1.4 billion domestic debut share sale in 2018, according to data compiled by Bloomberg. Even after a strong 24% rally since mid-November, the benchmark VN Index is still 30% lower this year, making it one of the worst-performing equity gauges in the world.

VinFast reported 8,779.7 billion dong ($365.3 million) from sales of vehicles for the nine months of the year ended Sept 30, according to the filing. The company had 1,854.6 billion dong in cash and cash equivalents for the same period.

The filing comes after the company loaded 999 electric vehicles onto a VinFast branded cargo ship destined for Los Angeles on Nov 25. The five-year-old company said it will deliver vehicles to its first US customers later this month, beginning the immense challenge of taking on the world’s top auto brands.

The company, little known outside of Vietnam, acknowledged its success will depend on achieving commercial acceptance in competitive markets like the US and Europe.

The automaker’s efforts to become a global brand include the recent groundbreaking of a North Carolina factory, where it expects to start production in July 2024. It signed agreements with banks in July to raise at least $4 billion for its US expansion. However, the company said in late November that it needs to delay EV rollouts in Europe and Canada to early 2023 due to the global shortage of semiconductors.