It's not the European-tailored Zafira but a more cost-effective version made for emerging markets. Is the Spin any good?

Compact seven-seat MPVs are popular in Indonesia because they don't cost too much and can take many people on board to fight tight road space. As well, our Asean neighbour gives special taxes for such vehicles, explaining why models like the Honda Freed, Suzuki Ertiga and Toyota Avanza are being assembled there and shipped to Thailand duty-free via the Afta scheme. 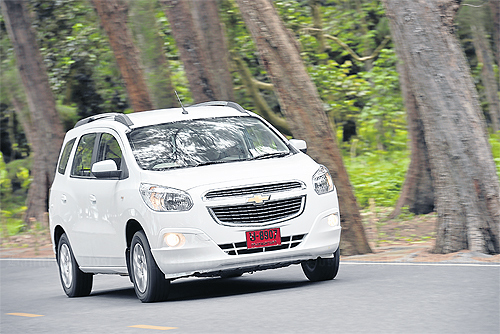 Today, Chevrolet has become the latest mainstream player to employ a similar tactic to the Japanese by basing production of the Brazilian-developed Spin in Indonesia.

It's not that the market for mini-MPVs is so big in Thailand that Chevrolet decided to sell the Spin here, because it is claimed that many Thais have a tendency to question the quality of Indonesian-made cars.

But, hey, it's better than nothing. The addition of a new offering to any particular Thai model line-up is welcome because product variety in Thailand is somewhat limited, thanks to some old measures protecting the car-making industry in the country.

It's worth noting that this isn't the first time Chevrolet has sold an MPV in Thailand.

When it entered the country in 2000, it started with the European-developed Zafira which was based on C-segment credentials rather than the B-segment ones of the Spin.

So, is the Spin any good, especially when it faces competition from big-time players like Honda and Toyota? Put it like this: mini-MPVs of this breed were never really excellent, and the same goes for the Spin. 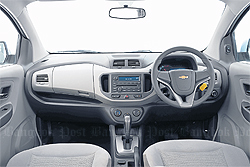 Fuss-free driving environment is easy to live with.

Take design, as a start. While the Spin has a very predictable front look, the car can seem a little quirky from other angles, especially its rear three-quarter view.

The clumsy overall stance doesn't serve a dynamic purpose and reflects what can be perceived in both the Freed and Avanza. It appears the Ertiga looks the most car-like, if still not rousing to look at.

Jump inside the Spin and you'll note the so-called twin-cockpit dashboard design Chevrolet is employing in its current cars. The simplicity it embodies makes for an easy to live with driving environment.

Just don't start to get sophisticated about how a cabin should be to touch and feel because there are mostly hard plastics strewn all over the place while the seating upholstery doesn't seem tailored to last.

Mini-MPVs in this class don't offer spectacular space for seven people and the Spin is one of them. Although passengers get a high, airy seating position, there isn't much legroom in any row even though you can easily place your feet beneath the seats in front of you.

In versatility terms, the Spin bags merits and flaws. The good bit is the ability to fold the second and third rows of seats to help create a large area for accommodating big stuff. Tuck away the last tier and you get a vast boot.

But if you're trying to mix occupant-and cargo-carrying ability together, the Spin isn't perfect because the rear-most seats don't split fold. And if you're a second-row occupant looking for more comfort, the backrest can only recline a little. 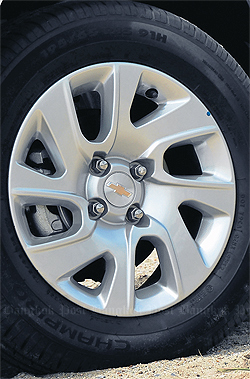 Taut chassis is one selling point.

Buyers can also expect some compromises when driving the Spin. Power comes from a 107hp 1.5-litre engine that provides decent acceleration and low-end power. In fact, there's a nice spread of torque at town speeds.

But once you get on the highway, it can feel occasionally breathless. And despite the use of the six-speed automatic transmission _ a first in its class _ the overall gearing is short.

The reason for this, according to engineers, is the need to give the Spin good pulling power at low to medium speeds under load because that's how Indonesians use their cars.

At 100kph, the Spin's engine is loitering at a high-ish 3,000rpm in top gear _ very much like in its rivals. After driving to Rayong and back, we managed just 10.5kpl, far short of the 13.4kpl figure Chevrolet is claiming.

But if there's one thing to like in the Spin over its opponents, it would probably be the chassis. The ride is generally taut at all times, while the body is decently stable at high speeds.

The Spin's hydraulically assisted (unlike the more modern electrical set-up that can help reduce fuel consumption by a small degree) steering feels a touch heavy at low speeds but crisp higher up _ a good thing as a weekend car but perhaps not when doing the dreaded school run.

That's mostly the problem with the Spin. Whether you are going to use it as a daily car or one with recreation in mind, there are compromises to be made.

The Spin isn't priced to kill, either. Available in just one trim, it costs 762,000 baht, in between the Avanza/Ertiga and Freed.

This, in the end, doesn't make the Spin a winner or loser. You just need to sort out your priorities. As mentioned earlier, at least be thankful that you now have another product to choose from.

Despite a predictable front design, the Spin looks quite quirky from other angles.

The ride is quite comfortable by class standards; steering is crisp but can be heavy at low speeds.

It can take seven but not in a great manner; seat versatility is average.

LTZ is the only trim available: dual airbags and anti-lock brakes.

Like most of its rivals, the Spin has been designed to be a city runabout rather than an MPV for the weekend. This means there's a bag of merits and flaws. 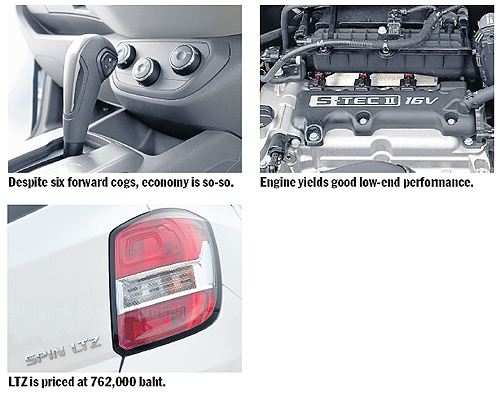 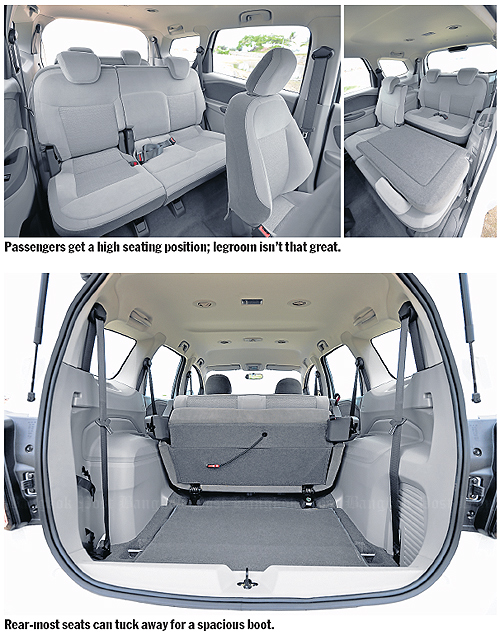 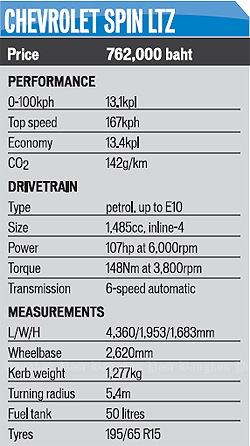 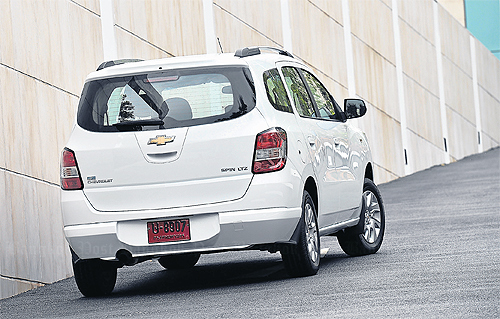 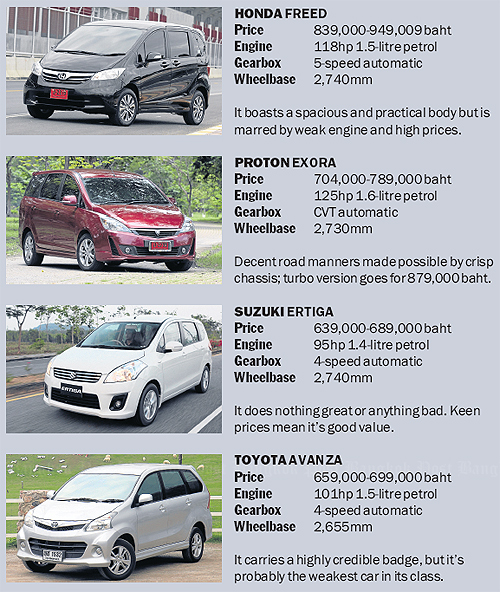