Rather than taking on the likes of the Mercedes-Benz E-class, the Lexus GS now ought to be a closer rival to the CLS

This is the mandatory facelift of the Lexus GS, a rear-wheel-drive executive saloon taking on the BMW 5-series, Jaguar XF and Mercedes-Benz E-class.

Updates include tweaked front and rear ends, plus a revamped specification spread to cope with new excise taxes and the addition of a new entry-level variant in the guise of GS200t. While we were anticipating a drive with this turbocharged GS, it still isn’t available for the Thai media to test drive.

Hence, the GS300h, as tested here, whose 223hp 2.5-litre petrol-electric hybrid and CVT automatic have been carried over without any technical changes. Now that there’s a 100g/km CO2 demarcation in place for hybrid-powered cars, the GS300h’s rating of 127g/km has made its excise tax rise from 10 to 20%. In Premium spec, the GS300h now costs 4.83 million baht — a hefty 540,000 baht more than in the similarly specified pre-facelift model.

This may only be a midlife revision, but the visual changes are quite substantial for Lexus fans. The arrow-shaped LED headlights and spindle-like front grille feel more pronounced than ever. And we’re not talking about the F Sport package yet which is only available for the GS200t and GS350 in Thailand.

Sure, beauty is in the eye of the beholder. But applying spicier and racier lines to the GS does make sense because this is supposed to be Lexus’ sporty equivalent in the brand’s executive car line-up; the classy one is the front-wheel-drive ES saloon.

Although the interior is basically unchanged, there’s a new, good-to-hold steering wheel to further underscore the cabin’s high quality feel. Speaking of this, the GS remains highly specified with passive safety features (10 airbags) and convenience items not readily available in any of its competition.

On the move, the GS300h is mostly about cruising refinement thanks to a petrol-electric hybrid that can run silently around town and car parks for brief moments without spewing any of that black stuff called CO2.

The electric assistance can also double as a performance-booster to make the GS300h reasonably quick outside the city, where the car’s chassis manages to deliver both a reasonably comfortable ride and easy handling. 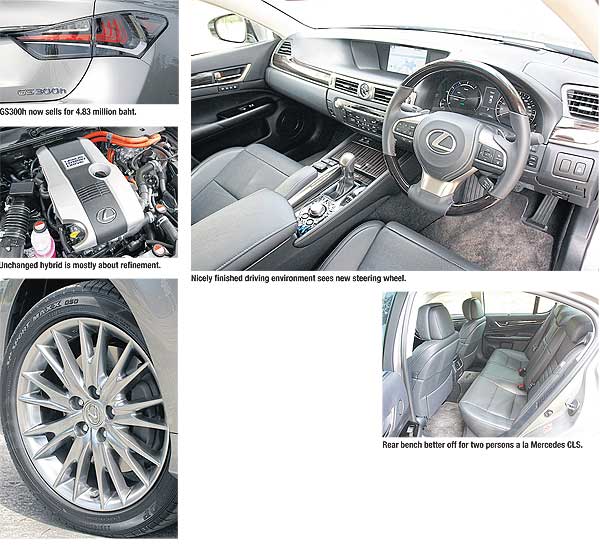 There was a time users could generally accept the elastic and not-so-instant feel of CVT transmissions, but this specific type of automatic has now become much better in the latest models offered in the mass-market.

Unfortunately, the GS300h’s gearbox hasn’t made any strides despite still being able to yield a stepless feel in gear-shifting and promoting economy levels to more than 15kpl where possible.

Techno wizards may also be disappointed to learn various driver-assist features from Lexus’ Safety Sense + package is not available in the GS300h; it’s reserved only for the pricey GS350 and GS450h models. It must also be remembered that the GS itself is more of a 2+2 rather than a proper five-seat saloon, for the fifth occupant can find absolutely no comfort from the high, hard centre seat and protruding shaft tunnel.

Despite some shortcomings like a relatively lazy transmission not suiting the GS’s sporty concept, there is still much to like about this hybrid-powered car. It steers and rides nicely, offers good cruising refinement, decent real-world economy and is still well-equipped against its intended competition.

But its imported status explains its higher price over possible rivals like the 528i and E300 Bluetec Hybrid.

However, if you’ve been contemplating the more unique CLS250 CDI — priced at 4.49 million baht and an additional 500k for the AMG Premium spec — you could weigh in the GS300h as an alternative.

Mercedes-Benz has yet to announce new prices for the CLS250 CDI — the tax rate falls from 35% to 30% under new rules this year — but it will still essentially be a 4 million baht saloon.

True, the GS was never conceived to be a direct rival for the CLS. But they share some similarities, including a package appealing more for four people and sporty looks to feel different on the road.

What the GS300h simply can’t match for the CLS250 CDI is a genuinely satisfying driving experience.