BMW has created the new M550i for saloon punters needing lots of performance but via driving civility. 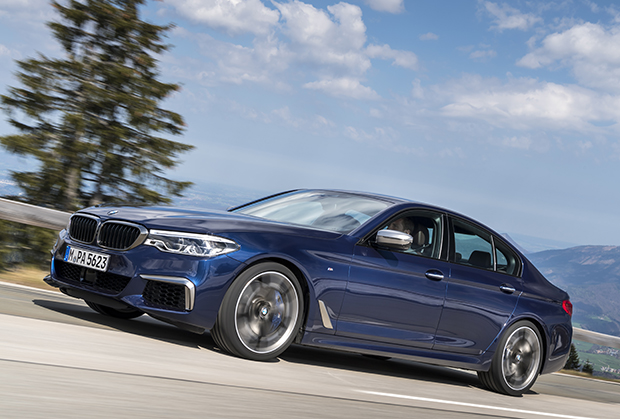 BMW is really on the ball in expanding its M Performance line of cars due to growing global demand of cars featuring meaty power and driving civility at the same time. Such business expansion is also forecast by its chief rival in Stuttgart for the Mercedes-AMG nameplate.

Like in most other M Performance cars, the M550i is designed as the “second-from-top” car in the 5-series lineup. That’s because, as we all know, the boss will be the pending new M5, said to run an even madder 600hp variation of that eight-pot motor.

Thus, it could be said that true driving fans of fast BMW cars should simply wait for the M5 as the M550i would probably be too meek for them. And after driving the M550i for the first time in Germany recently, that appears to be the answer.

But it isn’t game over yet for the M550i because that’s basically the exact intention of BMW for the line of differentiation. Additionally, the M550i helps bridge the gap between the M5 and six-pot 540i. In other words, it’s all about marketing.

Of course, with over 450 ponies under the bonnet, the M550i is a fast saloon. Its 4.0sec 0-100kph time feels credible under foot-down acceleration and the car hits the electronically capped 250kph top end on the German autobahn with absolutely no fuss.

The engine revs cleanly to the redline but without the sheer progressive thrust that’s probably reserved for the M5. The way the rear-biased xDrive system delivers the power to the tarmac also makes the driving experience secure and clinical. 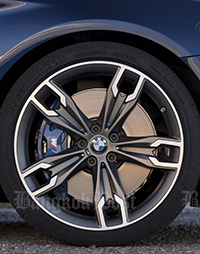 The V8 sounds muted, as well, but the noise level can be increased (via an artificial yet acceptable tune) by going into Sport mode, which also makes the engine and transmission more responsive and the steering and suspension beefier. Even so, the overall driving characteristics remain on the comfortable side of things

According to our moles in Munich, this will help create space for the M5 in terms of outright blast in a straight line, increased decibels on the ears and meatier handling made truly fun by an xDrive system that can also drive just the rear axle. Yes, it’s very clear that the M550i is for people liking a powerful saloon but via extremely refined driving manners. This is something the chaps at BMW M wouldn’t argue.

That also goes for the design in which BMW didn’t go to the extremities with the M550i. The wheels may look racy, but the visual add-ons on the outside are subtle and the brown, quilted leather inside cabin feels quite cold in the eyes of this tester.

Although BMW Thailand is taking imports of the larger V12-powered M760Li xDrive at some 12 million baht, it has yet to confirm whether it will be doing likewise for the M550i xDrive which should cost around 4 million baht less.

Whatever’s going to happen, it’s most likely that such cars will sell in extremely small numbers in Thailand. BMW says major markets for the M550i are the US, Germany and Russia.

On the brighter side of things, the M550i could be considered as a fine alternative to the Maserati Ghibli which comes with less powerful V6 engines but not cheaper prices. 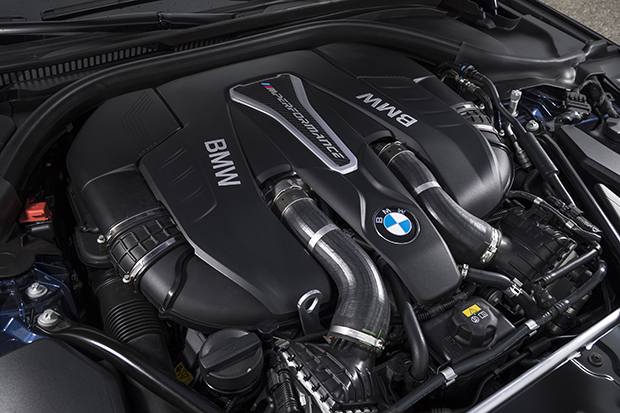 The noise of the V8 can be increased in Sport mode. 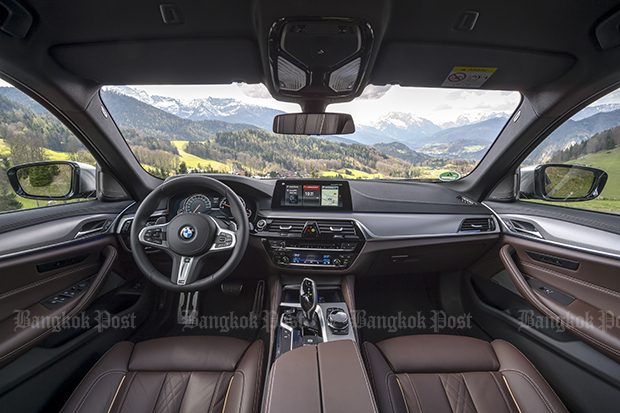 Cabin trim of test car is more about luxury than sportiness. 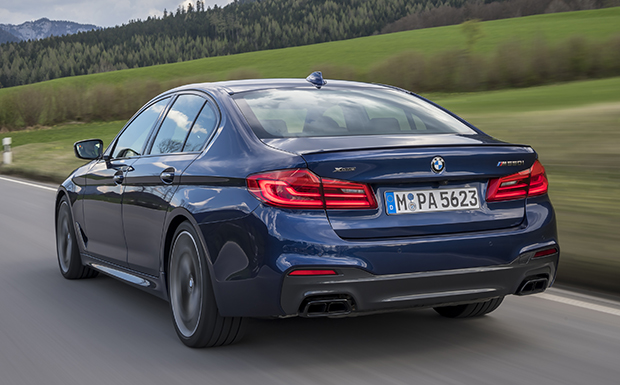 The M550i is massively quick on the move but full-blooded M it isn’t. 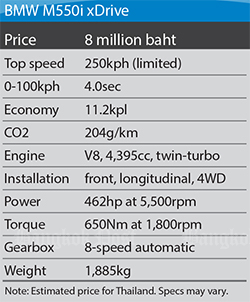