The Mazda CX-3 has been massaged to look a little more fresh and comfy to be in. But it’s still a mixed bag of virtues and flaws. 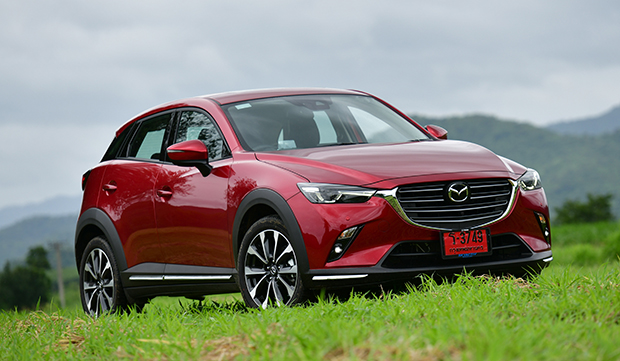 Mazda has given the CX-3 a mid-life update including visual tweaks, new interior console, more driver-assist features and some detailed changes in the chassis department.

The most notable cosmetic change outside is the restyled nose which now sees more pronounced horizontal slats incorporated into the grille. The rear lamps have been restyled too.

The main reason for altering the interior bit between the front seats is for the accommodation of a new electronic parking brake. Some suede-style material has also been added to the fascia.

In a bid to improve cruising comfort, the CX-3 gets a softer suspension set-up, as well as more external noise suppression. Mazda says the window panes, for one, have been changed to make the cabin a quieter place on the move.

There are four grades for the petrol-powered CX-3 coming with a carried-over 156hp 2.0-litre and six-speed automatic driving just the front wheels.

The E and C trims are the lowest priced ones costing 879,000 and 955,000 baht respectively to keep then attractive against the pricier Honda HR-V and Toyota C-HR. However, both E and C are equipped with 16-inch wheels and only two driving aids: blind spot recognition and rear traffic alert.

The S and SP, meanwhile, come with 18-inchers and LED head lights. It’s the latter one that only gets the full package of safety items including six airbags, all-round view, lane departure warning, automatic braking at city speeds and active cruise control.

Tested here is the SP range-topper which, unlike the E and C, goes into direct contention with those two aforementioned rivals with its 1.083 million baht price tag. 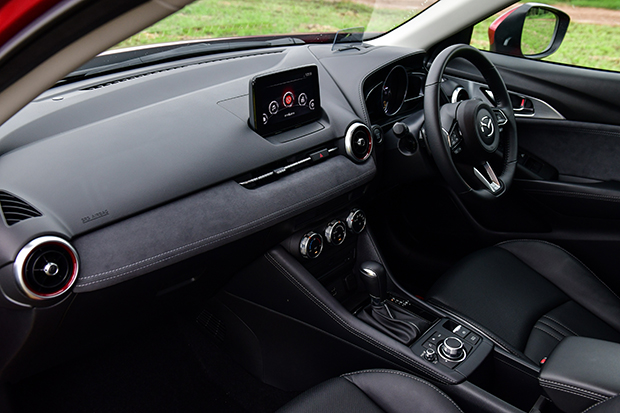 Ever since the CX-3 was launched some three years back, it stood out with stylish looks, good driving performance and sharp driving manners. That remains the case today, despite the arrival of the C-HR earlier this year.

New wheel design and some glossy black surfaces help keep the CX-3 fresh on the catwalk.

Although the engine is unchanged, it still provides plenty of all-round performance. So effortless is the power delivery that the four-pot motor is more economical yet pokier than the HR-V and non-hybrid C-HR with a 16.4kpl rating.

The decision to inject some ride comfort into the CX-3 is a good thing because it hasn’t necessarily backfired with a soggy handling. The presence of the brand’s GVC torque-vectoring control, incorporated into the CX-3 just before this facelift, also helps for a smoother ride and easier steering feel. Which is to say that the CX-3 remains a fun car to drive yet being comfier now.

If you really need driving aids, the SP-specced CX-3 has quite a decent list when compared with its opposition. The HR-V, in particular, isn’t that generous here even in range-topping form. 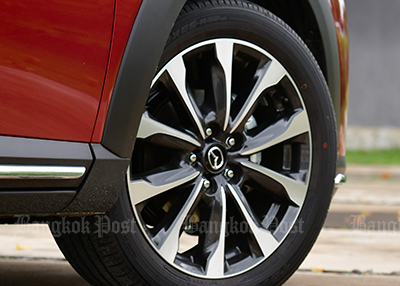 Although the CX-3 is now a touch comfier to drive, it probably won’t have quite the same level of fine handling and ride balance of the C-HR. At least, it’s better than in the HR-V, which suffers from an inconsistent ride quality.

Despite Mazda claiming improvements in NVH suppression (noise, vibration and harshness), the CX-3’s cabin still isn’t a quiet place to be in when driving at highway speeds.

While the interior has been freshened up with a more modern console, it’s still a place best suited for two people up front because rear and boot accommodation is hilariously tight.

Blimey, even the far cheaper MG ZS has considerably more of those which is to say that the CX-3’s size doesn’t really fit its price ambitions. Maybe, this CX-3 should have been called CX-2 like how the coupe-like CX-4 and CX-8 are to their practicality-oriented CX-5 and CX-9 siblings in other markets. 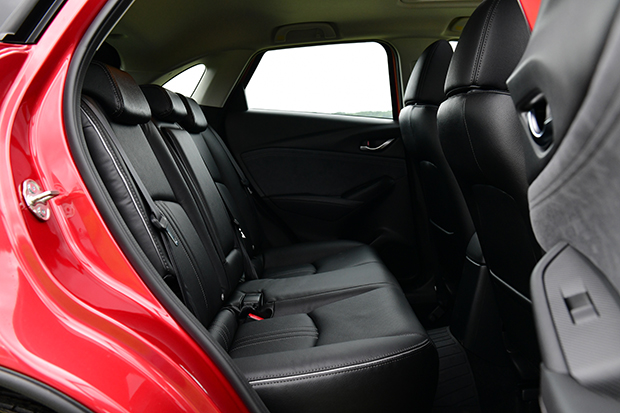 Like before, buyers who are eying this refreshed CX-3 have to make one thing clear. If they can live without a habitual cabin, it’s still the best B-segment SUV to drive thanks its potent power and spirited handling.

Mazda obviously knows that driving fun is not always the game in SUVs which is why those tweaks in comfort are becoming essential, although it still can’t do anything about the cramped package as this isn’t an all-new model yet.

So there you have it: a stylish and good to drive SUV for two. 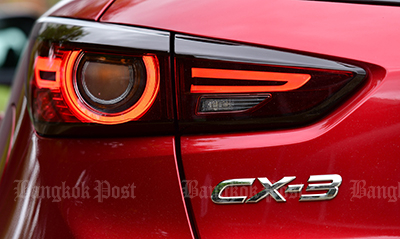 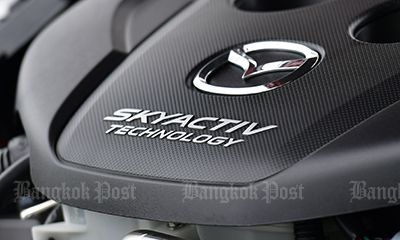 The Mazda CX-3 remains the only B-segment SUV in Thailand to have a diesel option to choose from.
Although a new 116hp 1.8-litre motor has already gone on sale in Japan, the 105hp 1.5-litre version has been carried over from the pre-facelift model for Thai sales.
However, the smaller diesel of the two still works well in the revised CX-3 by being reasonably quiet, punchy (270Nm of maximum torque is achieved between a useful 1,600-2,500rpm range) and fuel-efficient with 20kpl-plus ability.
This makes the XDL-badged CX-3 a respectable choice in its own right, although its high 1.189 million baht price has been a deterrent in the country where it needs to face 25% of excise tax; the E85-capable 2.0-litre petrol engine in the main story is subject to a lower 20%.
But the one that really thwarts the XDL proposition is the Toyota C-HR, whose hybrid model attracts a mere 4%. With a near-25kpl rating, the petrol-electric C-HR is priced between 1.069-1.159 million baht.
TRENDING
Do you like the content of this article?
COMMENT (2)
MORE IN SECTION