The Cullinan may just be another pricey SUV, but it’s quite a nice addition to the Rolls-Royce family. 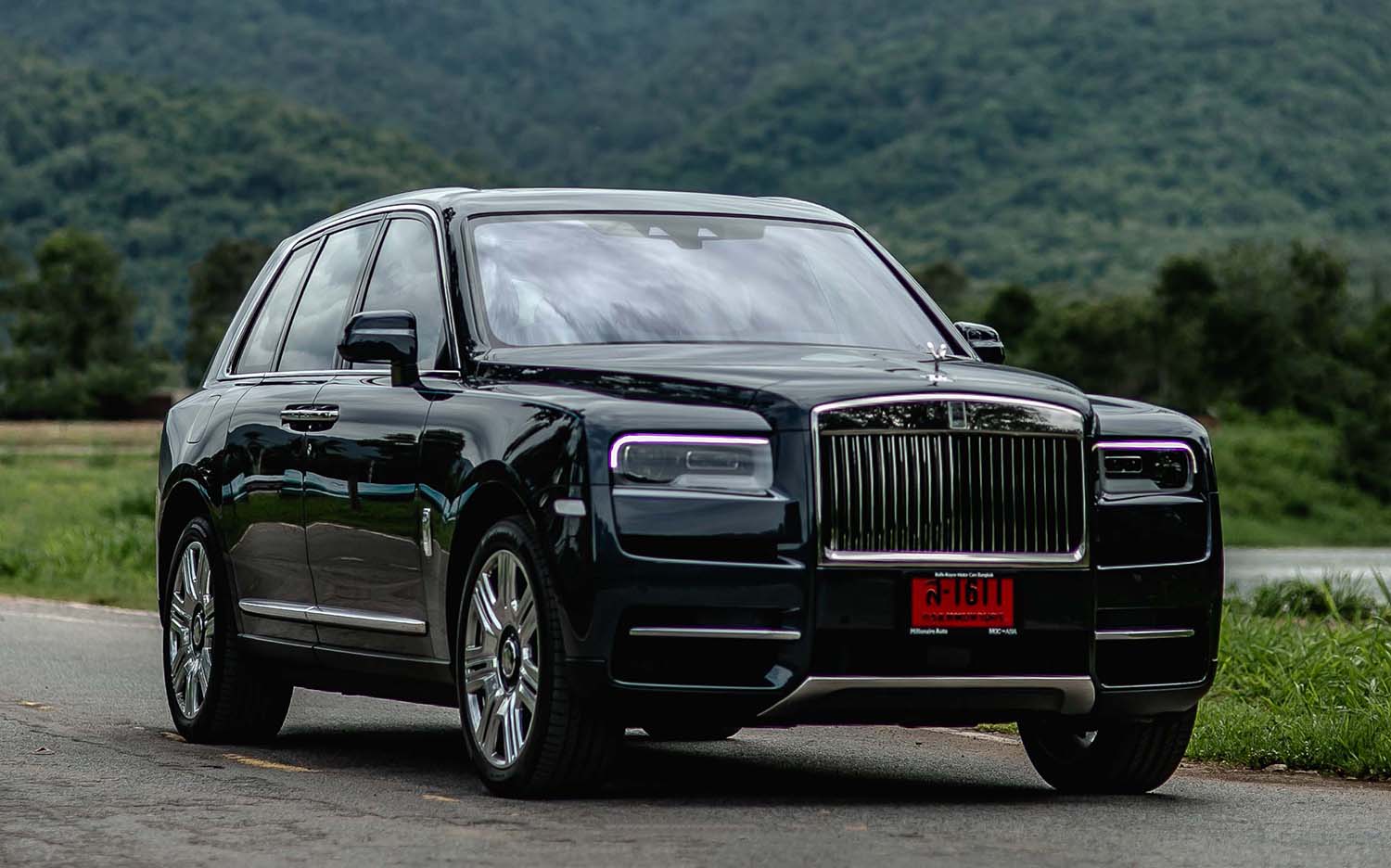 Any carmaker who says it won’t sell an SUV is either lying or trying not to be a follower. Even Rolls-Royce, arguably the most lavish car brand in the world that has now become more like art, has joined the SUV brouhaha.

You really can’t blame the Goodwood suits for making such a decision. High-riding crossovers, as how some like to call SUVs as well, can represent a third (or even half) of total sales for many high-end automotive nameplates.

But an SUV is kind of a nice addition to the Rolls-Royce family because it really has lots of presence on the road. You probably can’t argue that customers like to be seen in their Rollers, which should easily be the case for the Cullinan then. 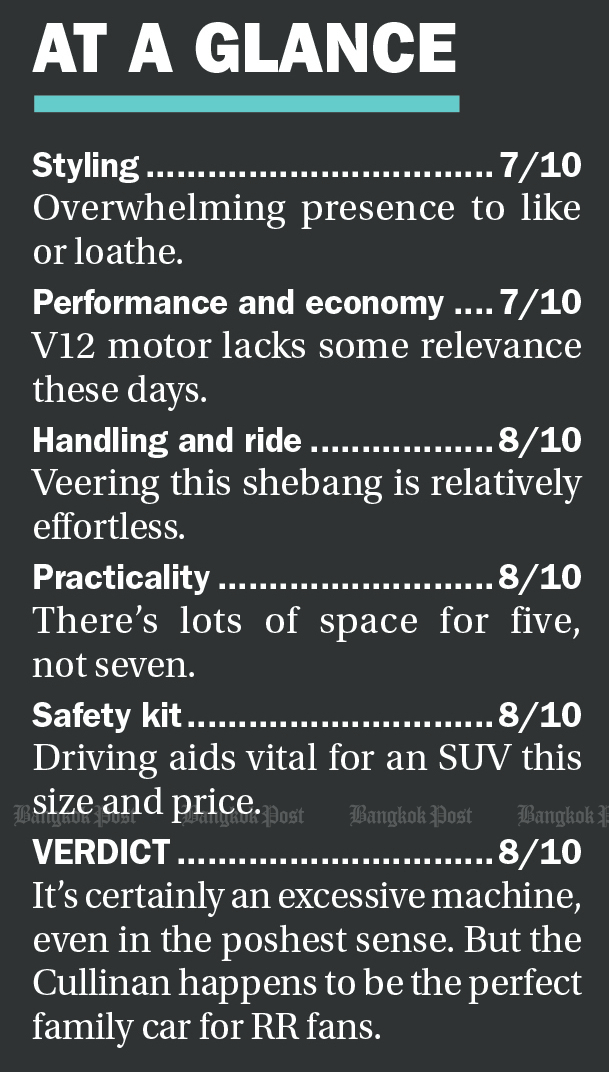 And because the Phantom/Ghost sedans are most likely to be chauffeur-driven and the Dawn/Wraith two-doors driven by their owners themselves, the Cullinan should be a good fix for clients needing a family mover for the weekend.

It must also be noted that the Cullinan is quite nicely proportioned when compared to other Rollers. There are the familiar squarish lights, huge wheels and heavily accentuated window lines that seemingly blend well.

Alright, excessiveness can be too much for many, but the Cullinan does exactly that. Whether it joins the Bentley Bentayga as ungainly to look at is for you dear reader to decide. 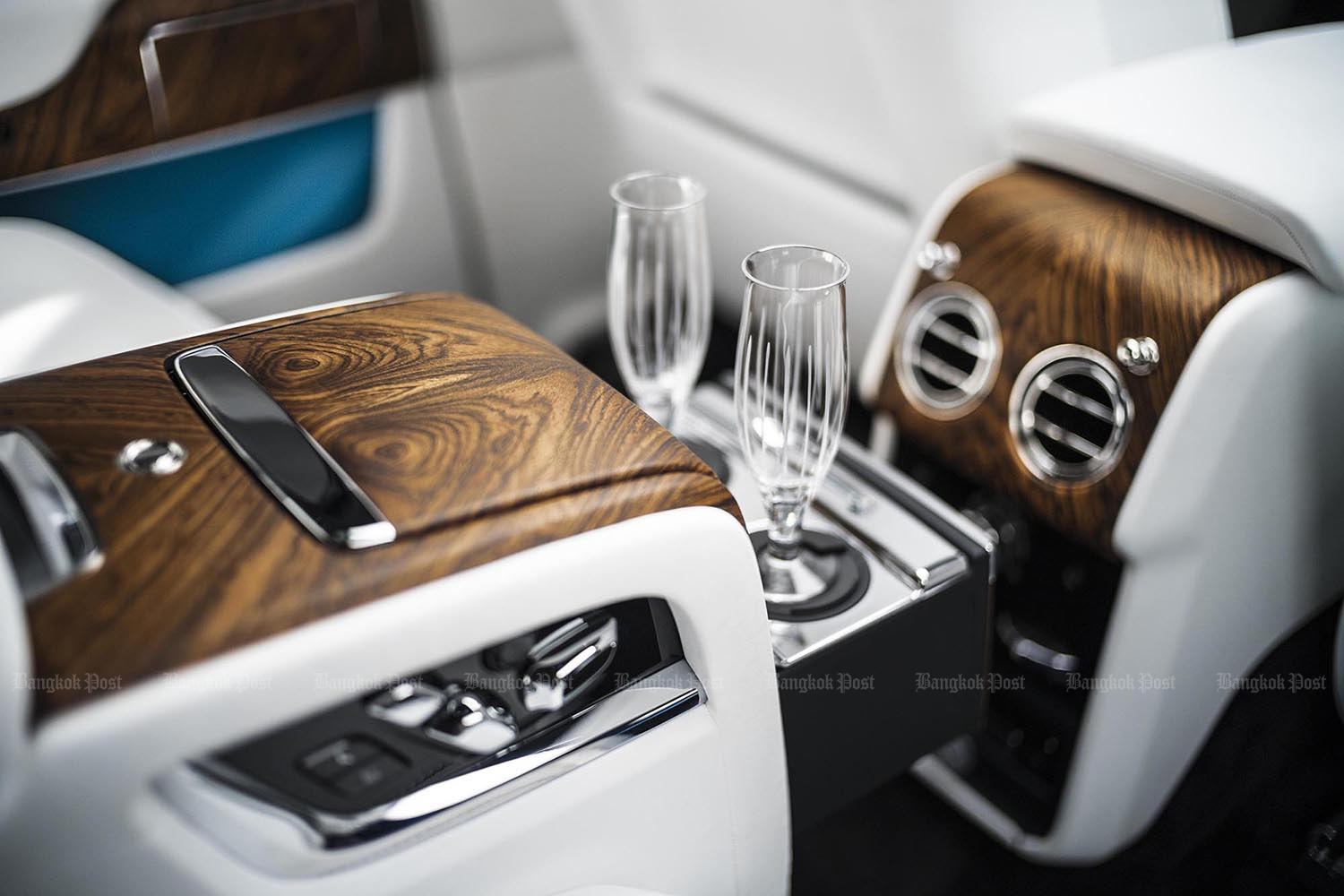 In the typical manner of Rolls-Royce, the Cullinan’s interior is an ultra-luxurious place to spend time in and can be personalised. Hey, this a is 30 million baht-plus car and potential clients will definitely want to feel different in something considered more like, as said earlier, art.

Despite measuring over 5m in length with already 3m going between the axles, the Cullinan is an utterly spacious SUV for five. Space is never an issue and the seats in all four corners are cushy to sit in.

A conventional rear bench for three can be specified, although it won’t be surprising to see many owners going for the type for two (as seen here). Unlike in the BMW X7 gargantuan SUV, the Cullinan has no third-row option which sounds sensible in the game of selling Rollers. 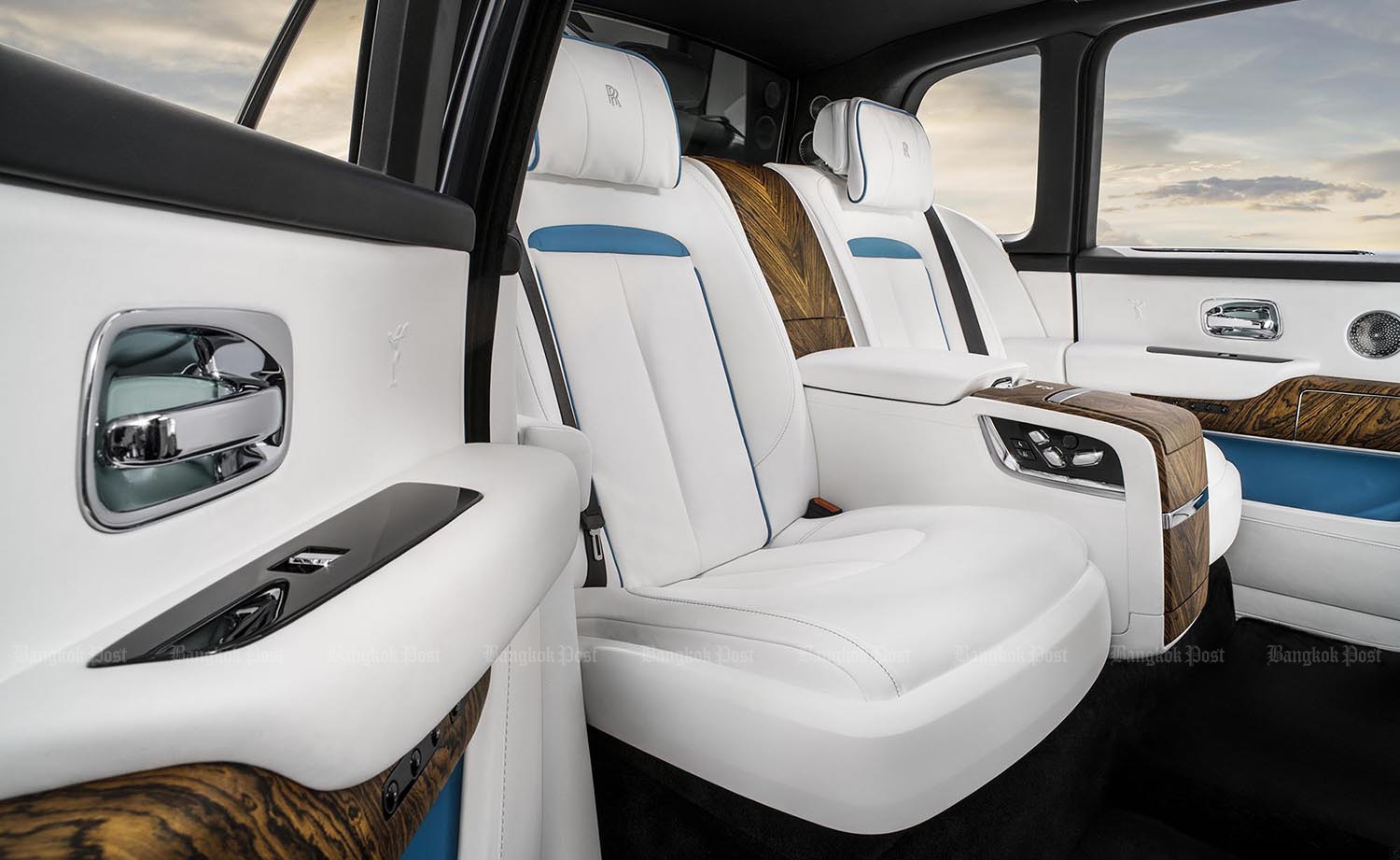 Although it would be highly rational for the X7 and Cullinan to share the same underpinnings given that BMW owns the British marque, people at Rolls-Royce insist that the Cullinan uses the brand’s proprietary aluminium spaceframe body, dubbed Architecture of Luxury.

Whatever, the Cullinan drives just like in other Rollers, that is, managing to conceal its size and weight reasonably well.

Perhaps some thanks must also be given to the thinly rimmed steering wheel that makes the handling feel effortless and quite feelsome. Owners and their chauffeurs alike should cherish it. 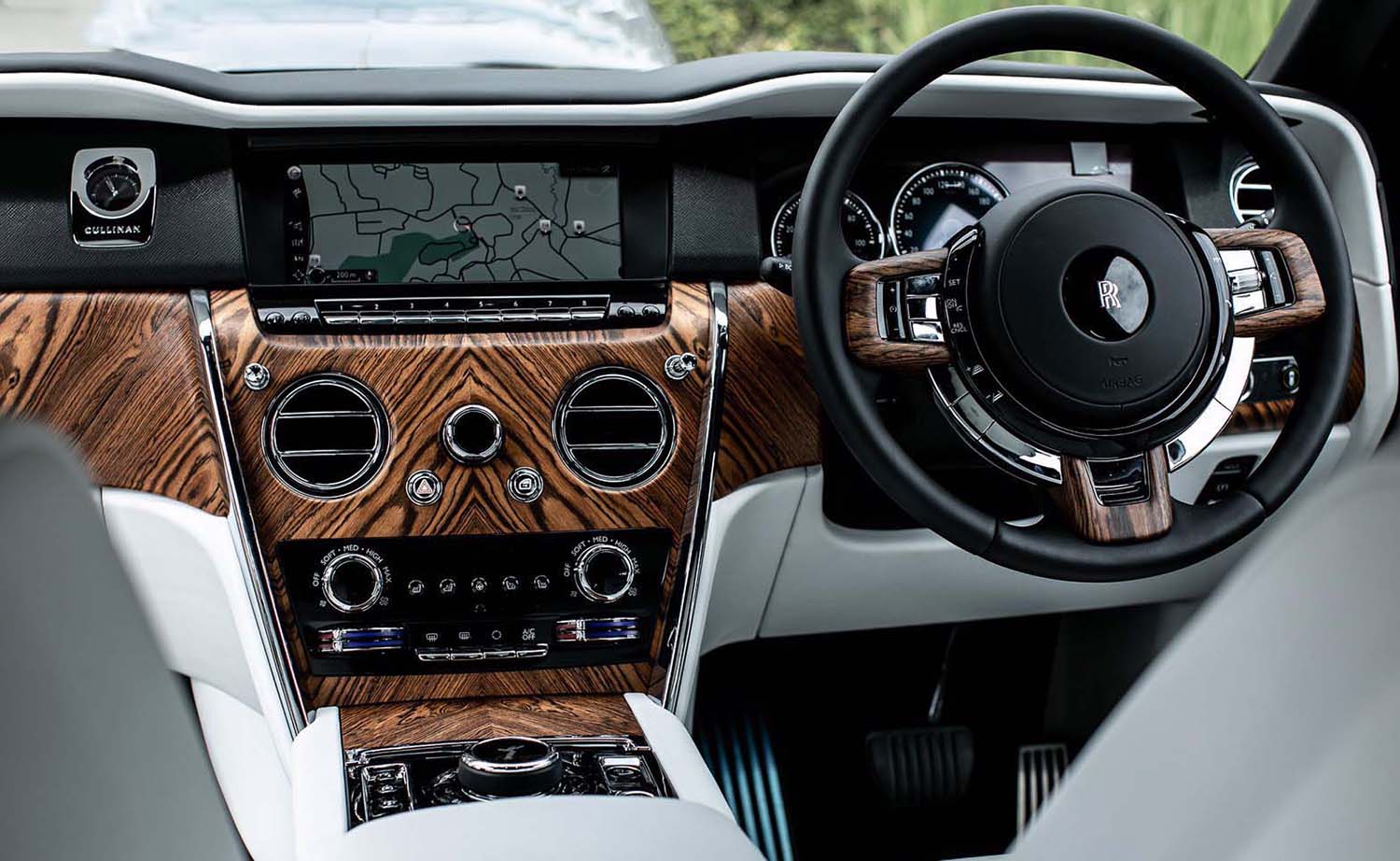 Because comfort is one of the most important ingredients of Rolls-Royce, the suspension has been tuned to match. The Cullinan’s ride is absorbent most of the time, although nasty ruts and potholes could be felt via the 22-inch wheels.

At high speeds, the cabin is so well-muted that you start to hear wind-buffeting on the huge side-view mirrors first. 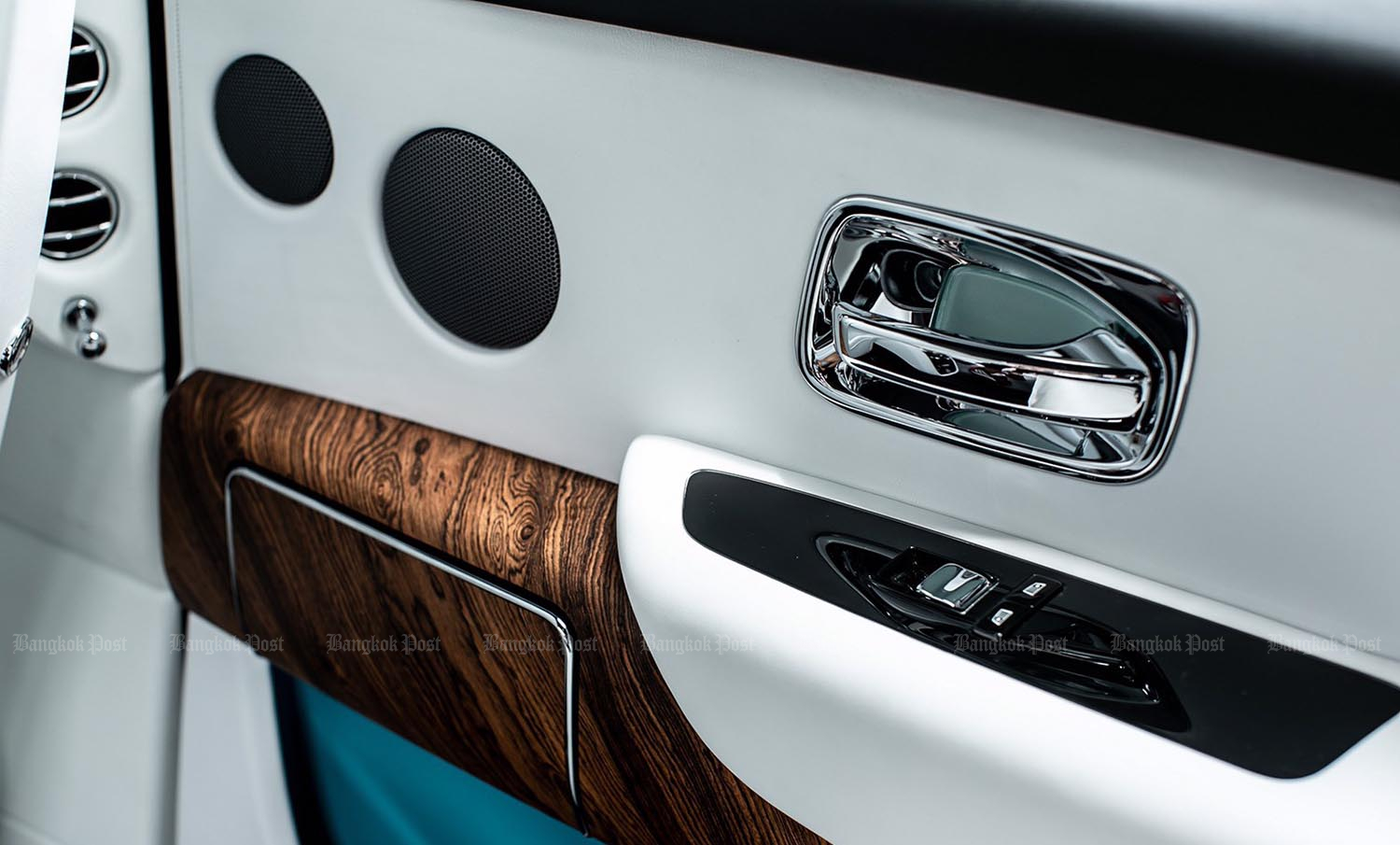 While a softly sprung suspension can hardly be a bad thing for the Cullinan, there’s excessive vertical movements of the body on undulating roads. It would have been nice if you could choose to firm up the sus to make the ride as flat as possible (that’s real comfort, BTW).

But there’s no selector on the console because Rolls-Royce found it more suitable to let the chassis do the adjustments automatically. The Bentayga seems to have a more resolved chassis setup, not to mention the ability to adjust the various driving parameters on a wider scope.

What you can select to do, though, is lower the vehicle to ease entry and exit. And since the Cullinan is an all-wheel-drive SUV, the body can be raised to take you into vineyards if exploring new jungle routes isn’t your cup of tea in a car of this price. 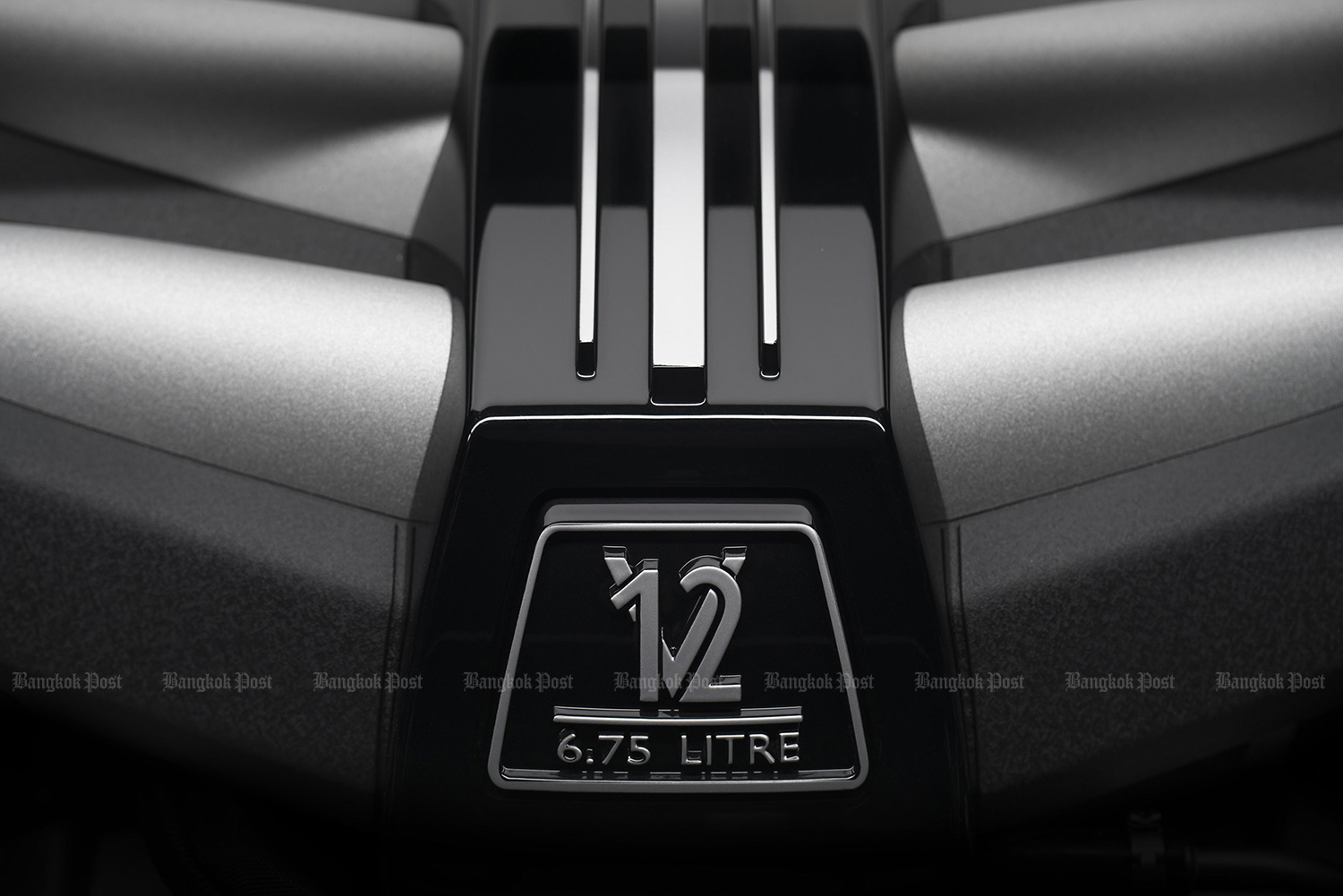 Rather than getting the 6.6-litre twin-turbo V12 from the Dawn, Ghost, Wraith and BMW 760Li, the Cullinan is making use of the 6.8-litre (6.75-litre, in Rolls-Royce way) counterpart from the Phantom. Power isn’t the name of the game here explaining why maximum torque arrives at a very low 1,600rpm.

And yes, the Cullinan wafts around just like the Phantom. The rich amount of low-rev grunt hardly persuades you to engage the eight-speed automatic into kickdown. The Cullinan moves around with ease at both city and highway speeds despite weighing more than 2.5 tonnes.

But you can’t help thinking why such a V12 can still be considered relevant these days even when gas bills mean nothing to buyers of Rolls-Royce. An engine with so many cylinders plus forced induction can surely feel more powerful than this. Worse is fuel economy.

Nevertheless, the Cullinan still remains highly desirable especially when it costs considerably less than the Phantom and nearly on par with the other smaller Rollers.

As said earlier, the Cullinan could be considered as a fine addition to the Rolls-Royce model range. In fact, most sales of it in Thailand are claimed to come from owners of the other existing models.

The most opulent SUV on sale at the moment? Yes, but don’t immediately discount some of its intended rivals lower down the price ranks when it comes to dynamic ability. But, perhaps, that isn’t the point in the Cullinan. 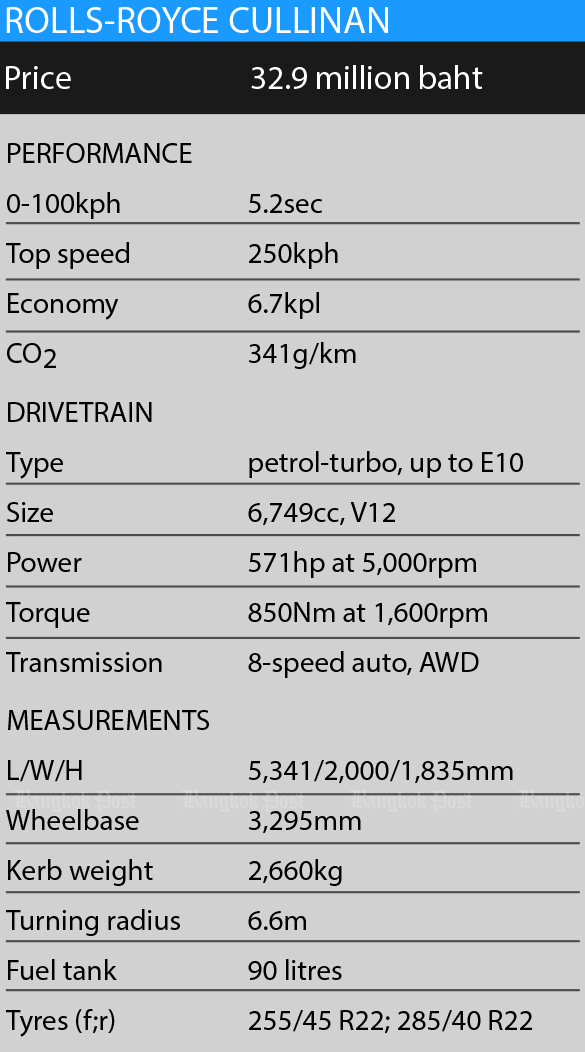 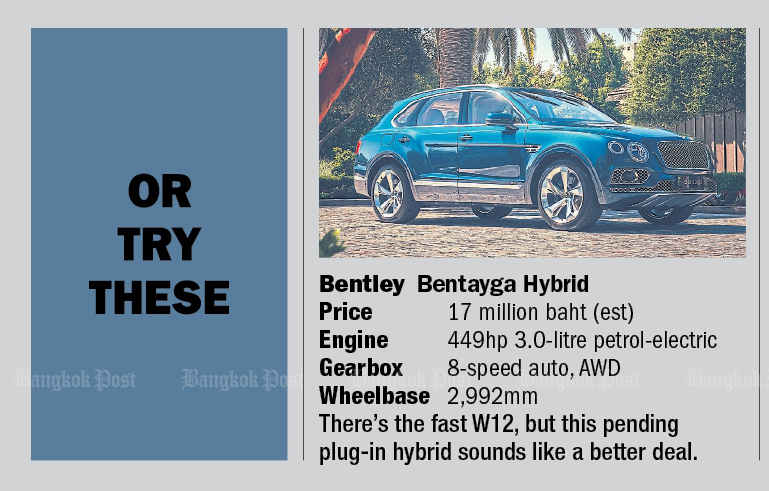 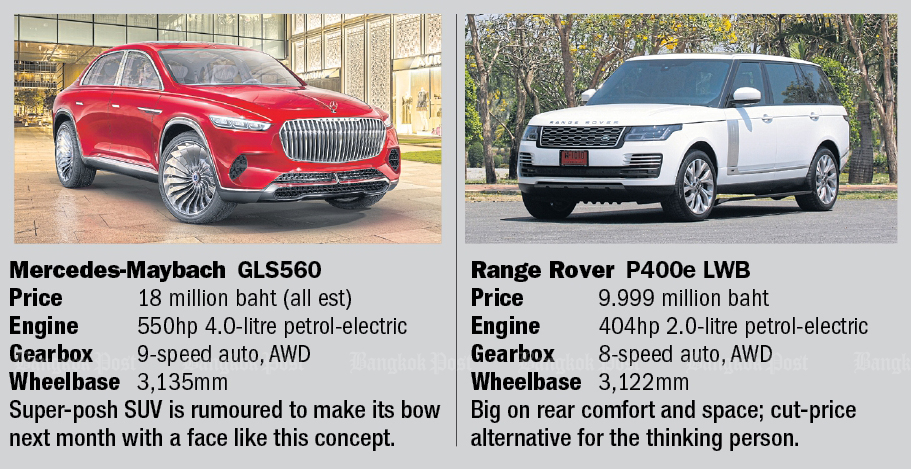