Can Mazda’s latest 3 defend its hatchback turf now that there’s a Civic fighter? 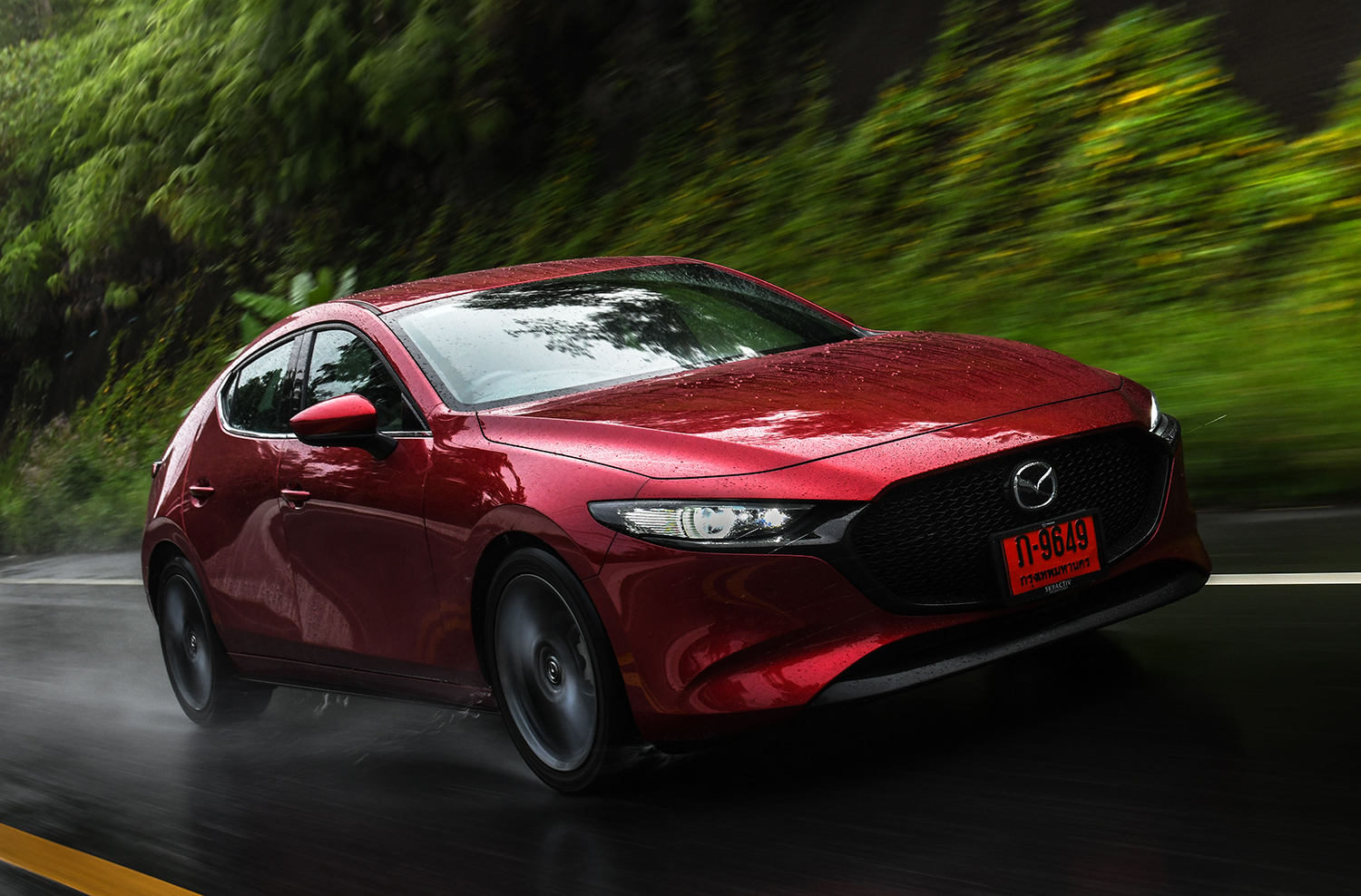 Mazda is one of those very few mass-market nameplates in Thailand to simultaneously launch hatchback and sedan versions of model ranges like the 2 and 3.

That’s why both body styles don’t have their own names, unlike the Honda City/Jazz and Nissan Sylphy/Pulsar, the respective challengers for the B-segment 2 and C-sector 3.

It must also be noted that Mazda is one of the early players in the country to have enjoyed sales success with hatchbacks, especially with the 3 since first-generation form.

Even so, Mazda is attempting to create more disparity with the two 3s in their latest generations. While the four-door we tested earlier is simply known as the 3, the five-door driven here this week is now called 3 Sport.

There are some small differences in the exterior design, as well. The rear lights, front grille and bumpers in the 3 Sport are slightly different with those on the sedan. And with such a fat C-pillar look and squat rear end, the 3 Sport reminisces the Alfa Romeo Brera of yore.

Apart from that, though, the two 3s are virtually the same having the same petrol engine, cabin design, grades and prices.

The 3 Sport SP seen here costs 1.198 million baht. Can it really be more desirable than the similarly priced Honda Civic Hatch VTEC Turbo, which has already passed mid-life in its current generation? 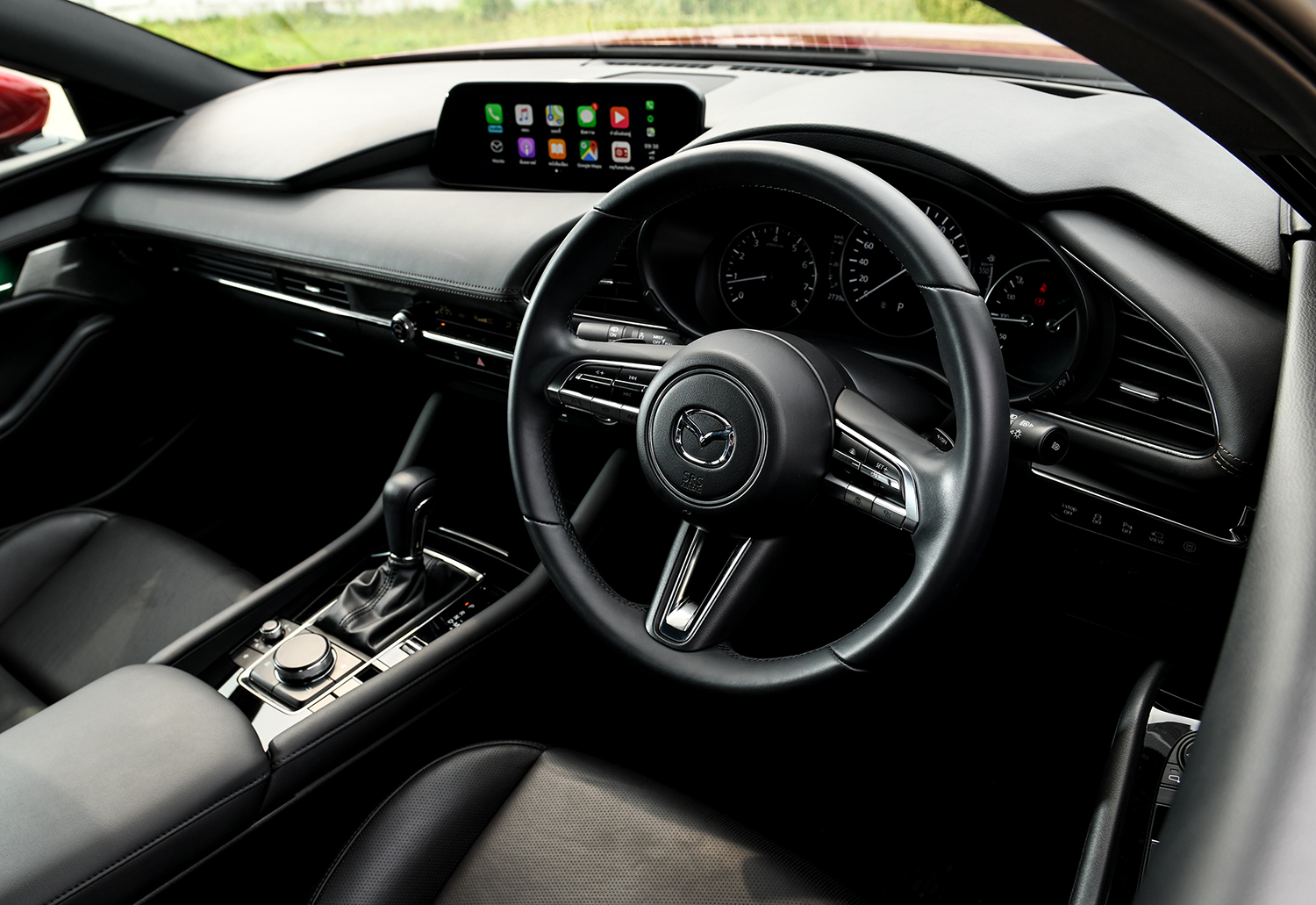 It must be said that both the Civic Hatch and 3 Sport are good-looking five-doors effectively appealing to young car buyers. Each have their own take on how a hatch should feel racy, so take your pick.

The same could almost be said for their interiors where Honda has adopted for super-clear ergonomics while Mazda has chosen to blend some elegance into a more subtle-looking cockpit. Likewise, their cabins have proper hatchback versatility.

Since many potential buyers of such cars in Thailand tend to associate hatchbacks with a sporty drive, the 3 Sport holds an edge over the Civic Hatch in terms of handling sharpness. In fact, Mazda rarely fumbles in this particularly facet because it always wanted to stand out against its softer Japanese rivals.

If you’re going to count every item pertaining to active and passive safety, the 3 Sport in SP spec looks more rewarding than in the Civic Hatch at such a price level. 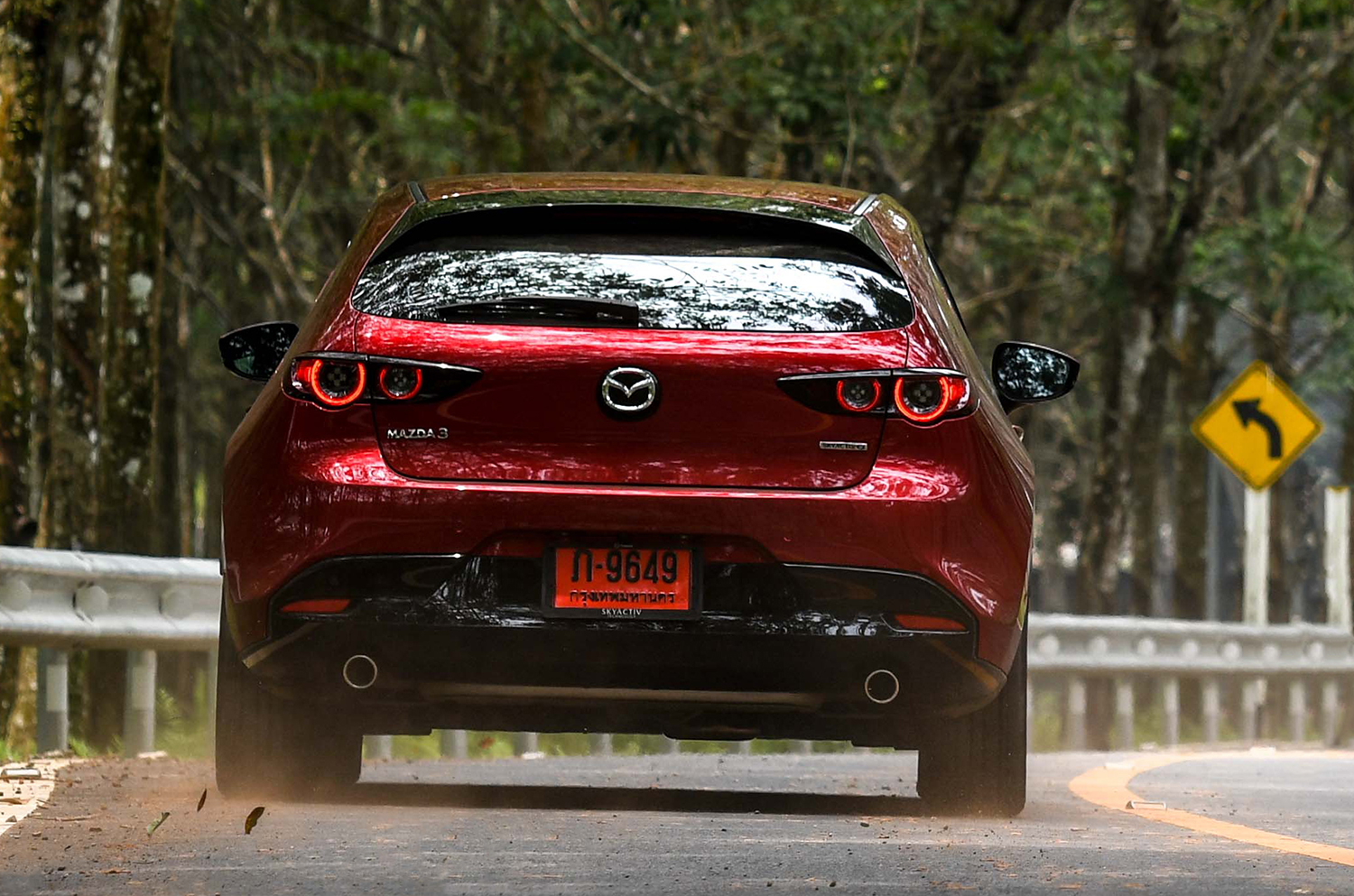 Because Mazda wants to inject some sporty flair into the driving characteristics of the 3 Sport, the firmly sprung chassis translates into a slightly stiff ride around town and over road expansion joints elsewhere. The ride in the Civic Hatch seems comfier.

But the biggest letdown in the 3 Sport (and its sedan sibling) is the engine. By being naturally aspirated, the 3 Sport’s 2.0-litre petrol engine lacks immediacy at low to medium speeds.

The Civic Hatch, in contrast, feels lively at all times thanks to a turbocharged 1.5-litre that also yields better results in fuel economy. In terms of powertrain technology, Honda is comfortably ahead of Mazda here. 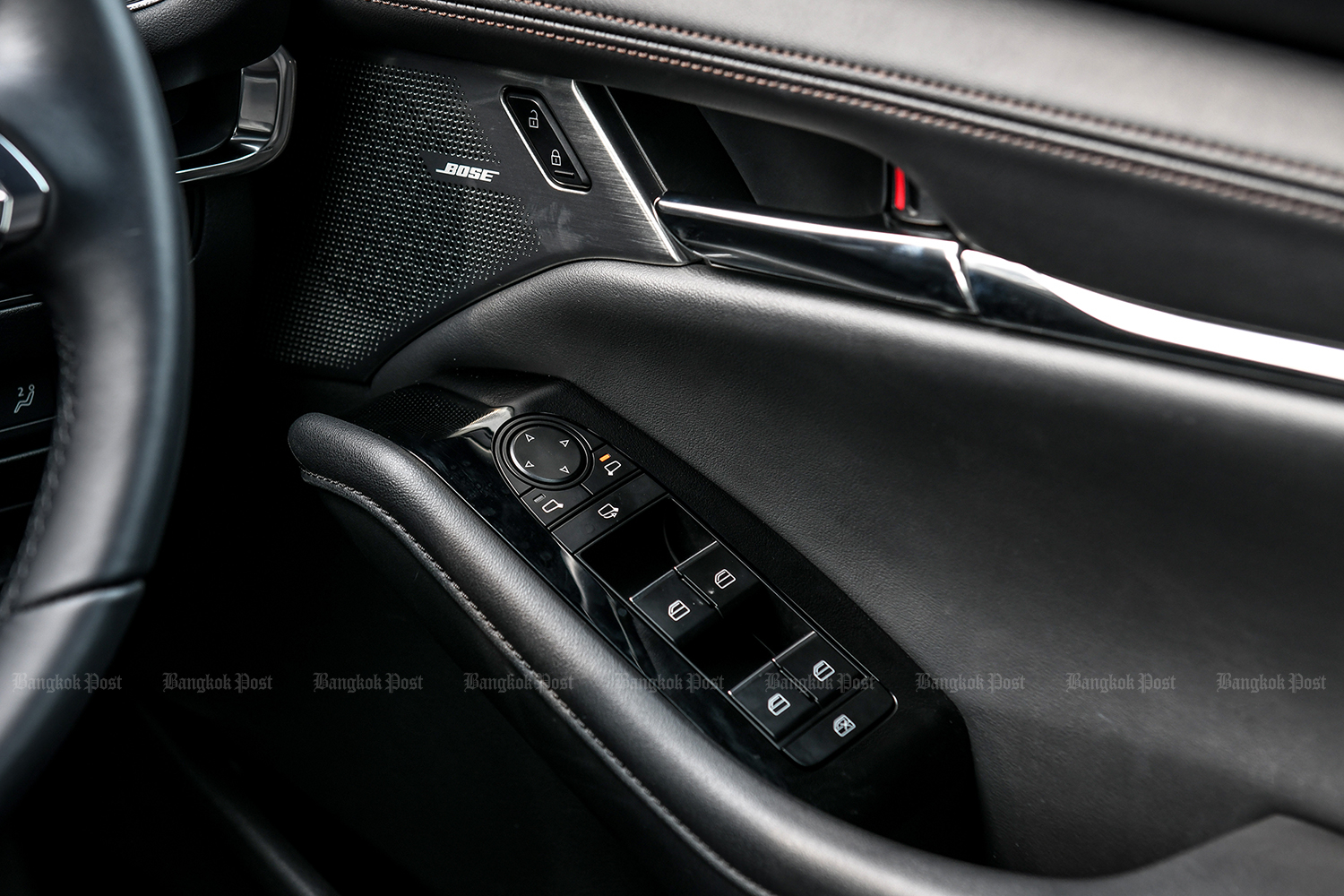 Thanks to a stronghold of Japanese powerhouses dominating the Thai passenger car market, the C-segment is now sparser than ever with Mazda, Nissan, Honda and Toyota being only the credible players left.

And because Nissan’s Pulsar is wearing too long of a beard and Toyota refusing to sell a hatch version of the Corolla in Thailand, there’s only the Honda Civic Hatch and Mazda 3 Sport to weigh for hatchback fans.

The 3 Sport has the looks, kit and handling to like, but it severely falls behind the Civic Hatch in the engine department. And when the Honda feels just as stylish (in another way), steers nearly as good but offers more comfort and uncompromised performance and economy, it’s quite a no-brainer that it wins over the Mazda. 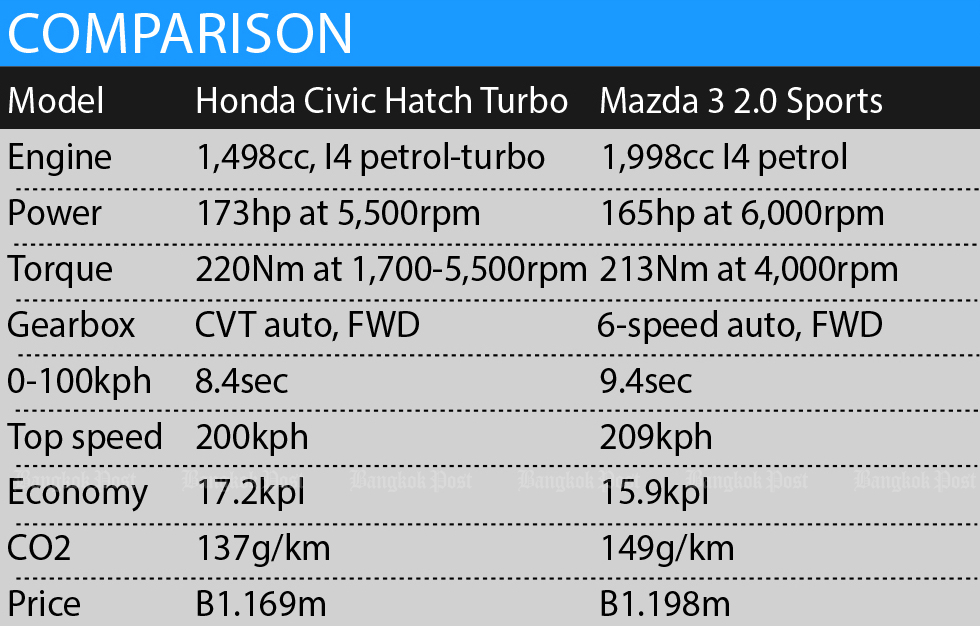 The coronavirus outbreak is likely to trim Thai exports to China by 1% in the first quarter of 2020 to about US$2.5 billion, according to joint estimates of the Thai National Shippers' Council (TNSC) and the Commerce Ministry.