The Lexus RX gets some subtle updates, although it still remains a different thing from most European counterparts. 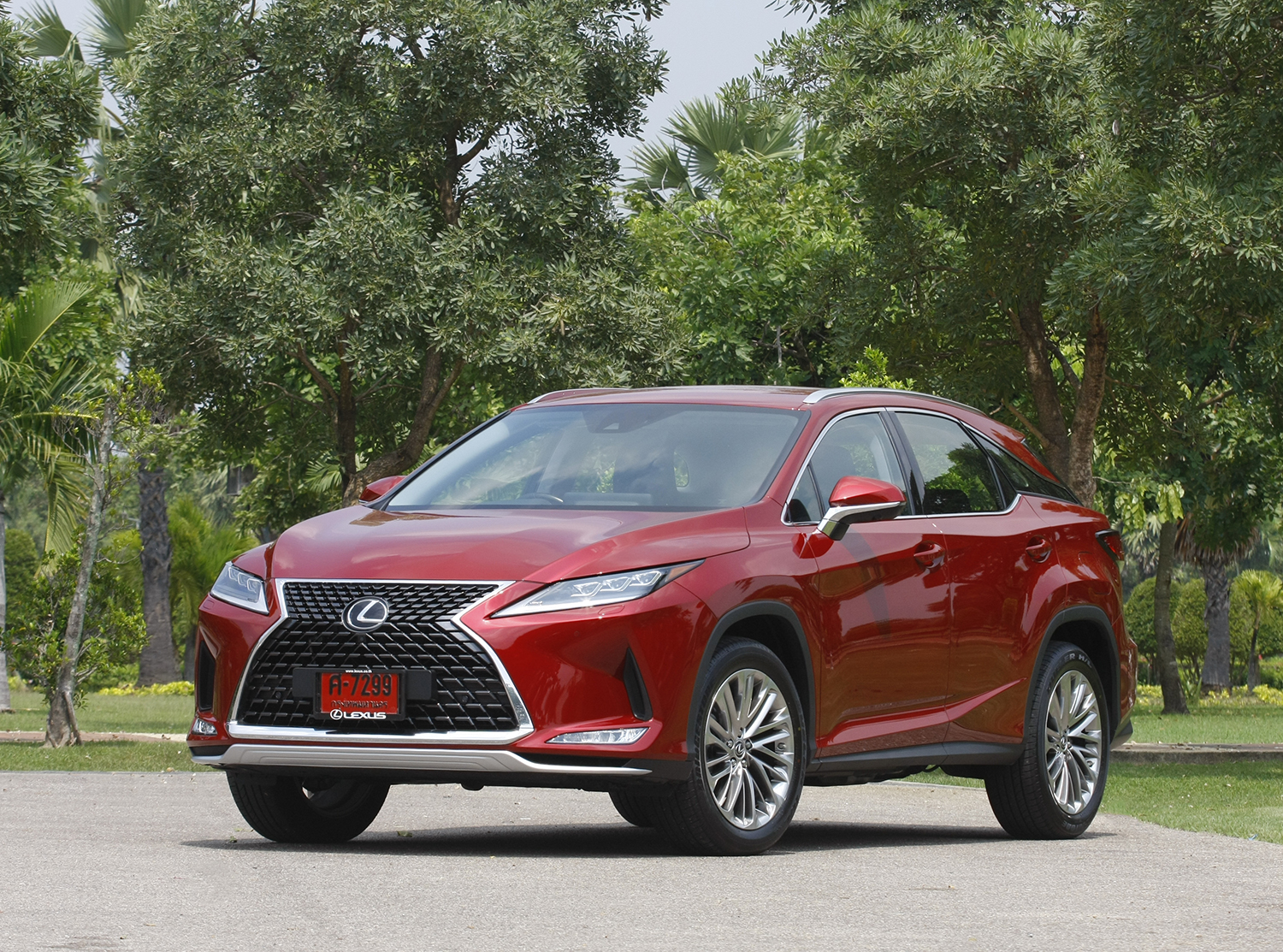 The Lexus division of Toyota Motor Thailand has updated the RX mid-size luxury SUV with some styling tweaks and new interior features.

While the design changes on the exterior are small in the typical fashion of mid-life updates, it’s the cabin that sees a more crucial alteration.

After being stung with criticism about an infotainment with controls that are fiddly to use, Lexus has added a conventional touchscreen function apart from the usual fingertip control pad.

There are now more driver-assist technologies available. As well, a new convenience item is the foot-operated tailgate operation.

The engine lineup remains the same as in the pre-facelift RX. They include the four-cylinder petrol-turbo (RX300), naturally aspirated V6 (RX350) and V6 hybrid (RX450h).

Lexus is focusing on the RX300 with three trims: Luxury at 4.23 million baht, Premium at 4.74 million baht and F Sport (if you additionally need AWD apart from spicy looks) at 5.35 million baht. If you like that new infotainment screen, you need to settle for at least Premium, as tested here.

Lexus hasn’t announced pricing for the RX350 and RX450h, although orders will still be taken; they once went for 6.8 and 7.6 million baht respectively. The RX450h can’t attract the 8% levy for hybrids due to its 3,000cc-plus engine thus needing to be content with the 40% maximum. 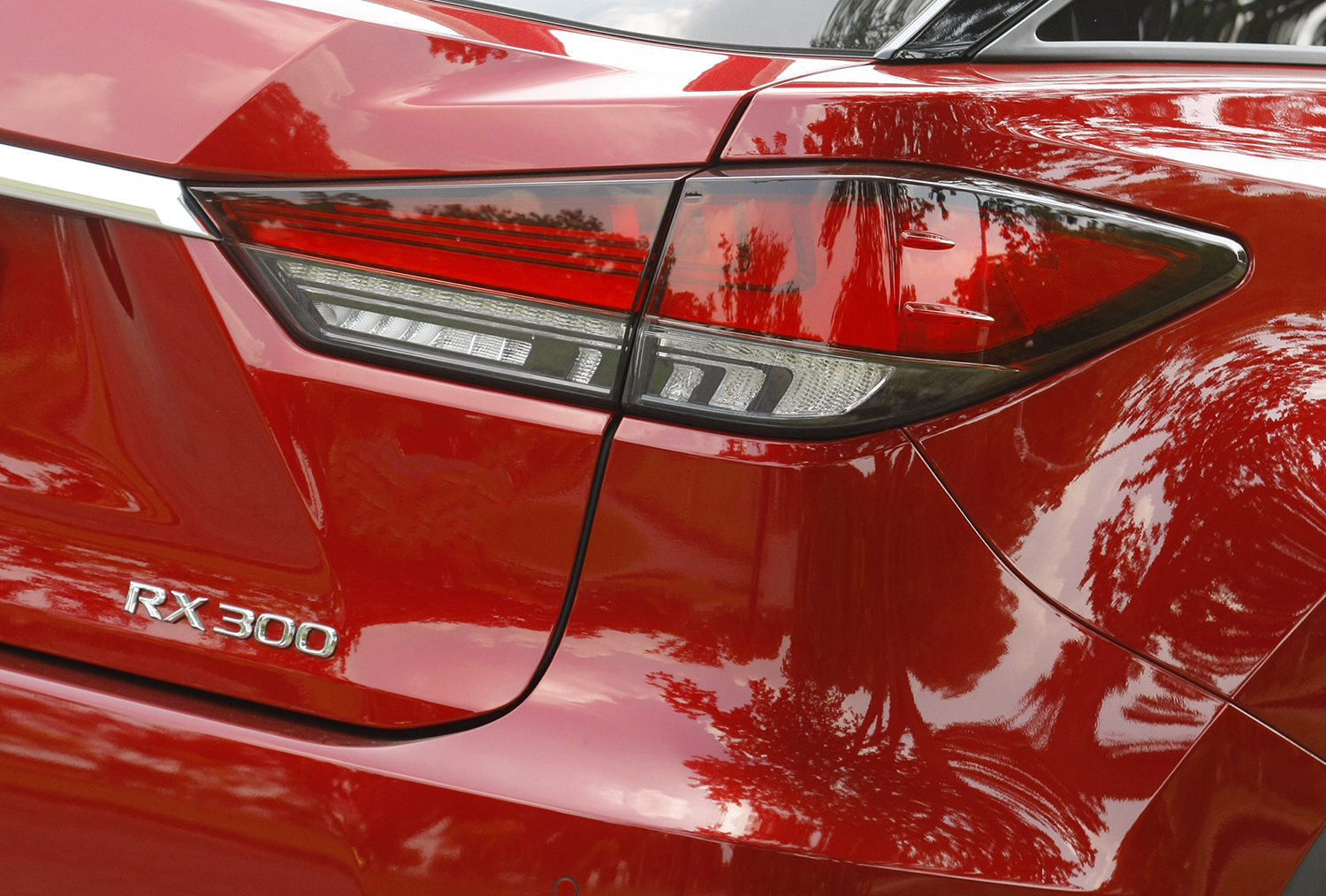 Despite its controversial chiseled surfaces, the overall shape of the RX remains distinctive with a more “crossover” look like in the Jaguar F-Pace and Range Rover Velar. The Audi Q7, BMW X5, Mercedes-Benz GLE and Volvo XC90, on the other hand, have tall “SUV” packages.

The RX also scores with comfort in its class. The cushy seats have cool-air ventilation up front and electrical reclining function in the rear. This is a proper five-seat crossover/SUV.

It doesn’t stop here. The ride is equally cossetting on most road conditions in this country and the turbo engine provides quick and refined pace at most times.

The decision to update the infotainment is timely. Although not perfect yet, it’s easier to use now that there’s fingertip control on the screen as well. 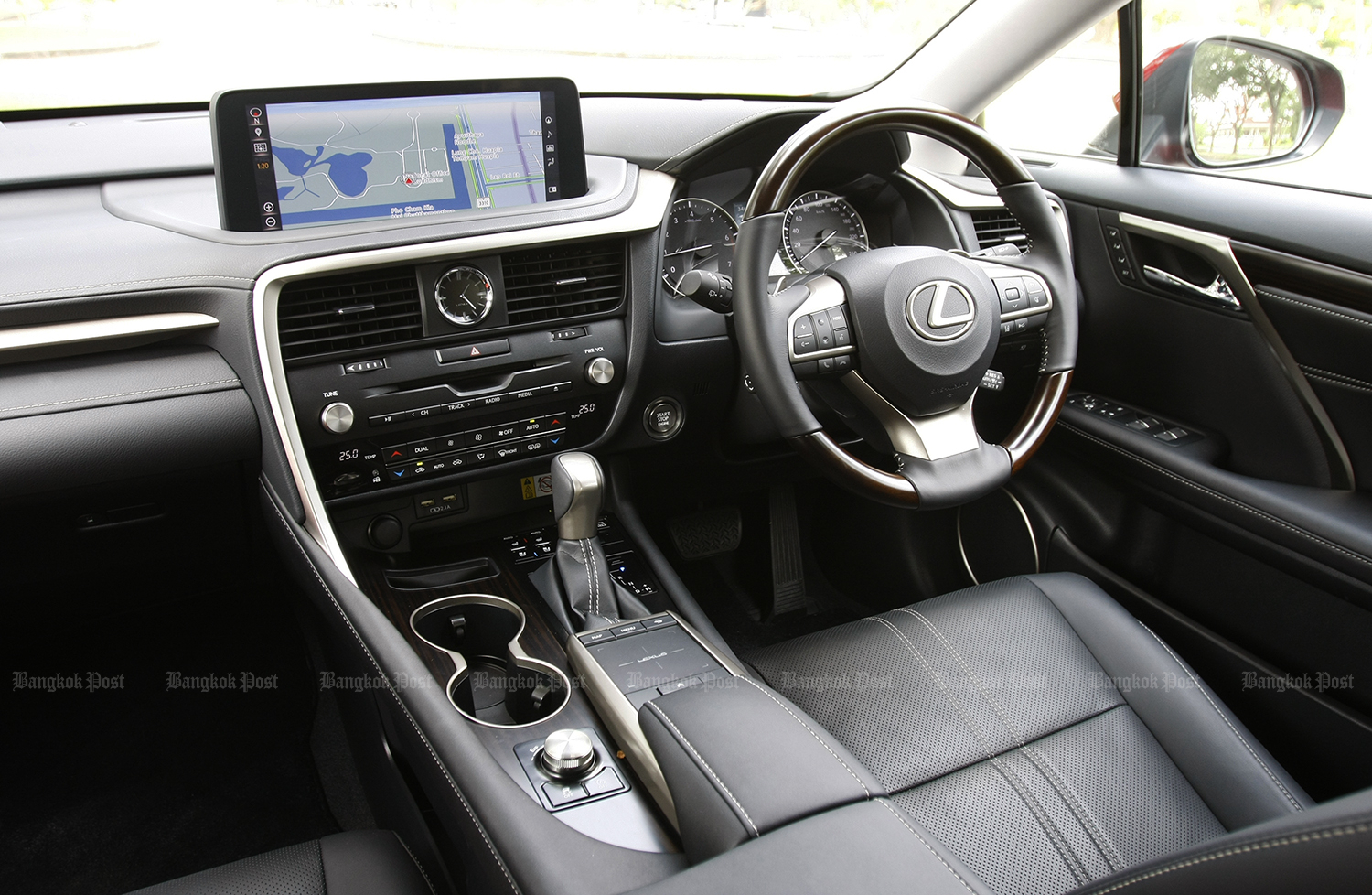 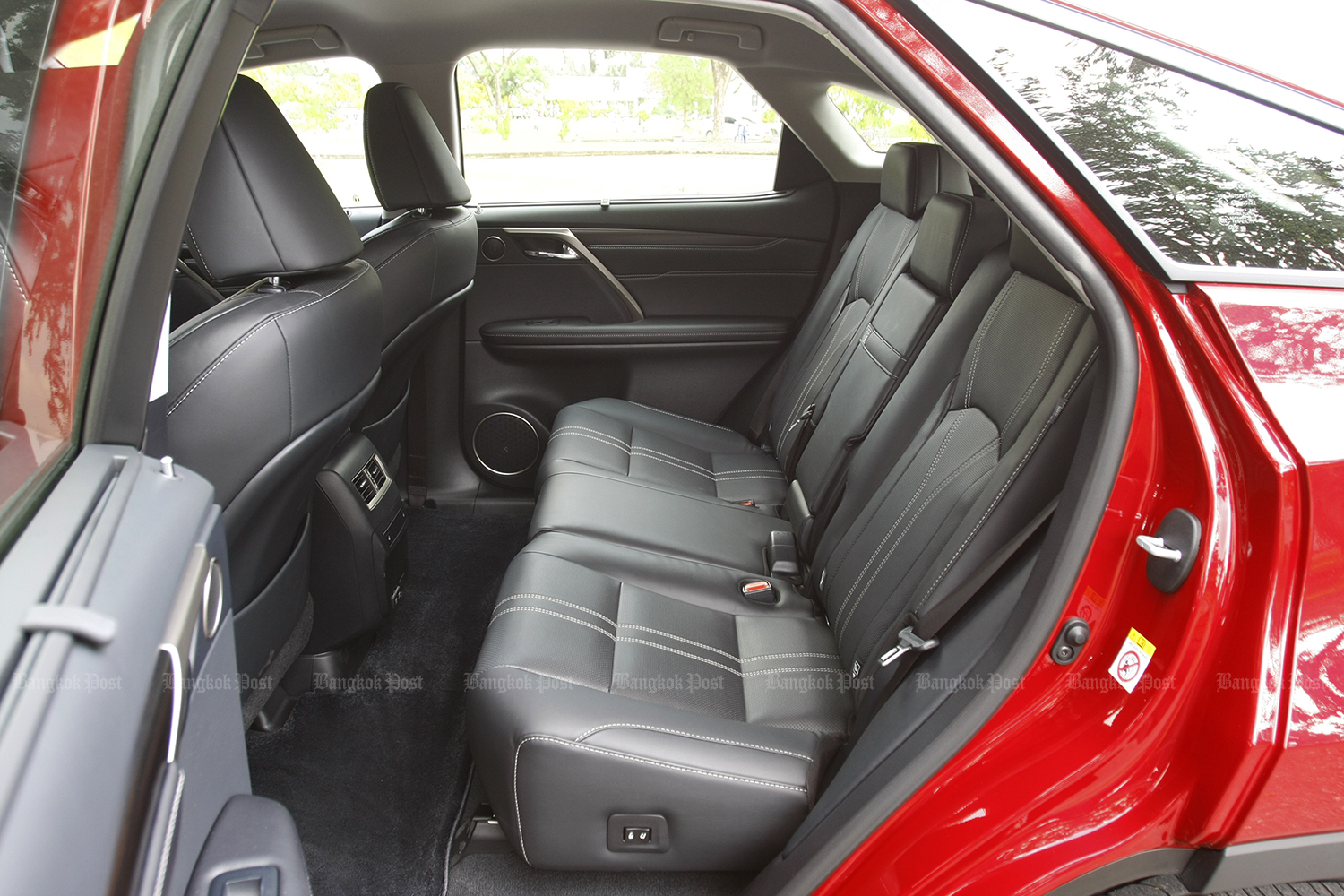 While the interior still looks suitably premium, the fascia and console feel dated with buttons strewn all over the place and those analogue speedo and tacho readouts.

There are some claims that the vehicle’s handling feel more responsive than ever, but it’s hard to note any change making the RX, as ever, more casual than sharp under quick changes in steering direction.

While turbocharging is here to stay with downsized combustion engines, the RX300 isn’t economical on fuel. Don’t blame the absence of hybrid tech, the automatic still has only six forward ratios. 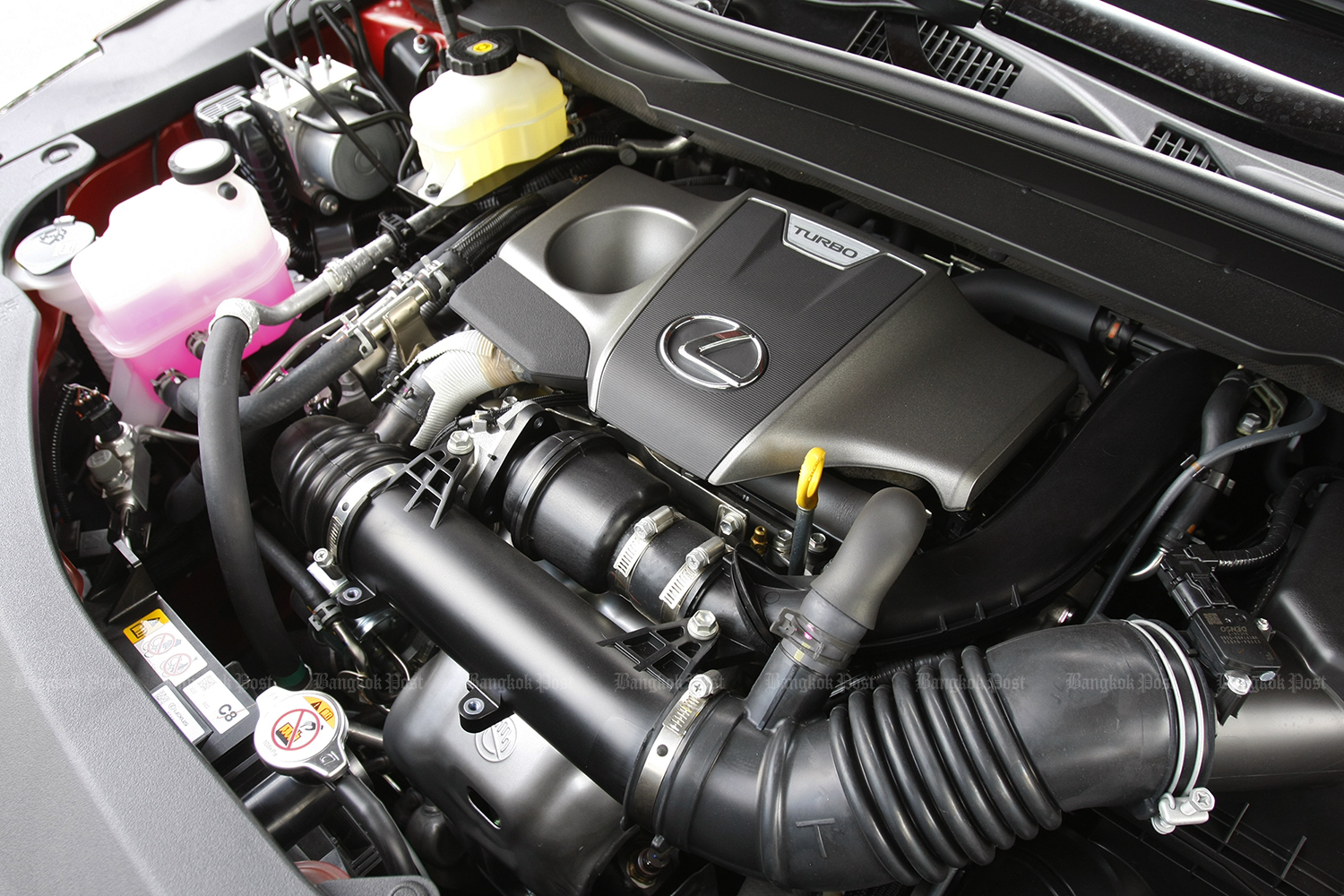 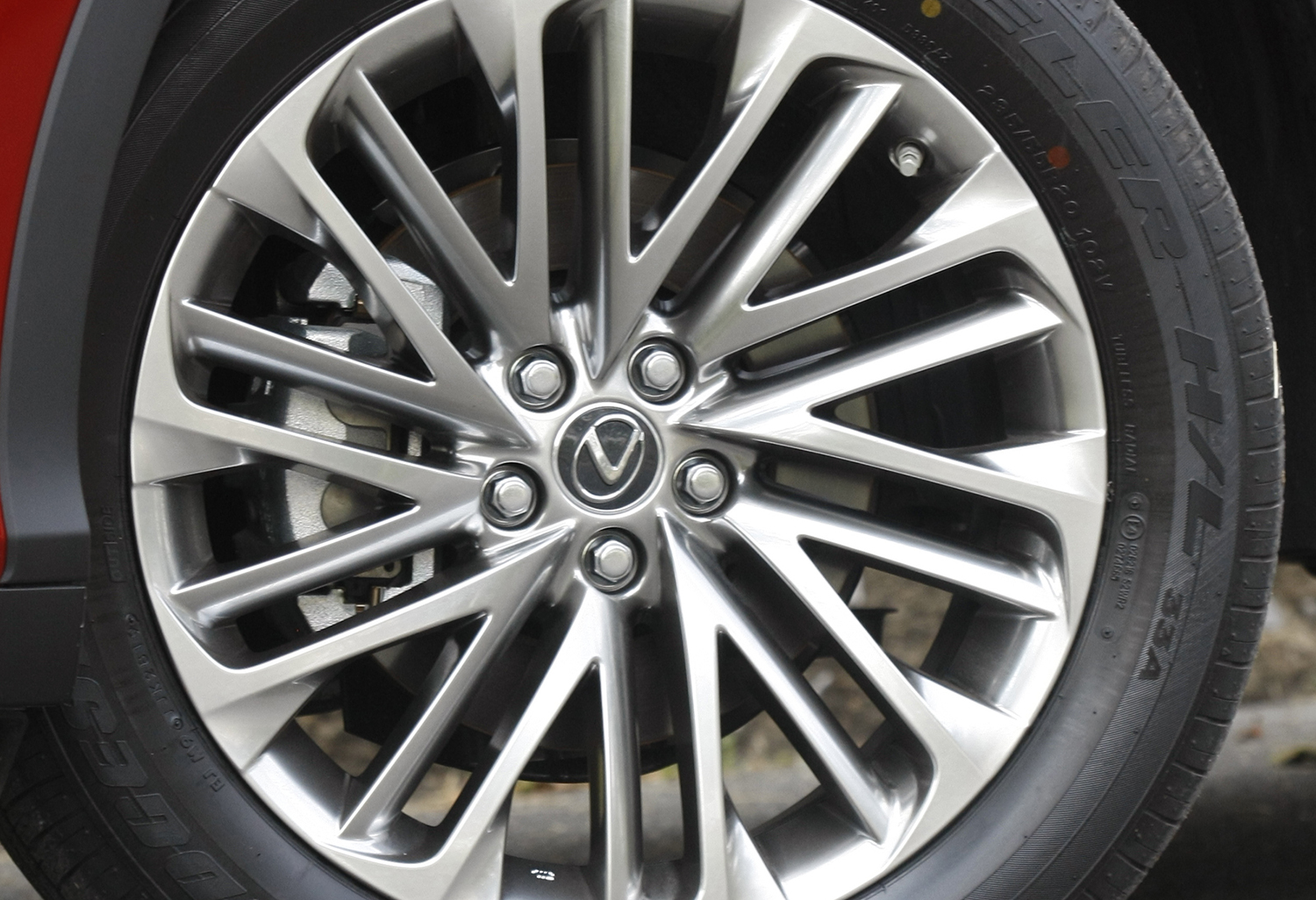 Despite its popularity in markets like the US, the RX never had an easy time in Thailand due to its relatively high prices caused by punitive import tax and brand pedigree not as posh as a Bimmer or Merc.

The engine range, as well, isn’t competitive in this country since all European rivals have punchy yet frugal diesels to choose, not to mention the major players having plug-in hybrids on offer.

Lexus has a four-cylinder petrol-electric hybrid in several other models, but such a powertrain strangely never made its way into the RX on a global basis.

OK, we’ll spare you all the arguments about whether SUVs are really being used the way they’re supposed to be these days. But the RX’s fine levels of daily comfort and usability is actually what buyers really like.

The RX is now in the second half of its current generation, but it still feels incomplete. 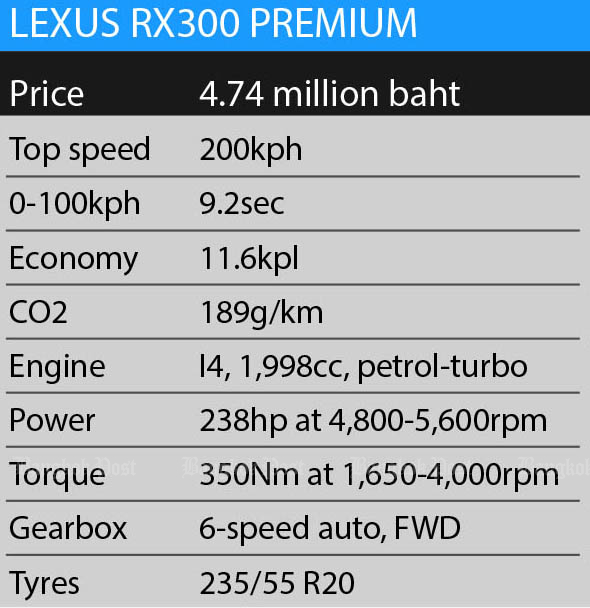