The A-Class sedan is set to become a crucial model for Mercedes in Thailand, but more fine-tuning is needed. 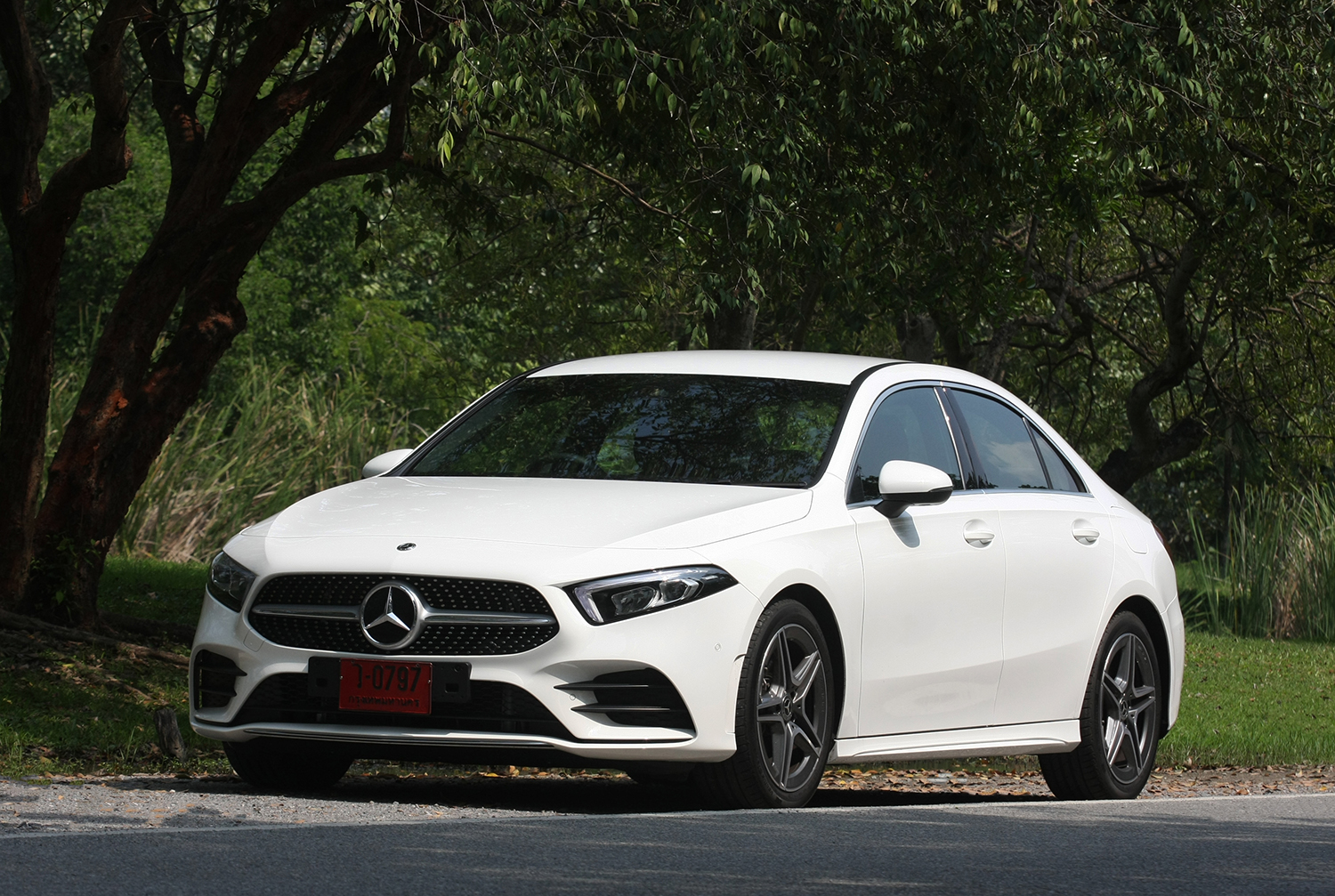 Despite the burgeoning popularity of SUVs, sedans still command a significant amount of attention from car buyers in Thailand who don’t need (or crave) a pickup.

This also applies to the Thai luxury car market in which family movers with a three-box silhouette like the BMW 3 and 5 Series, plus Mercedes-Benz C- and E-class take up considerable space at their brands’ respective Thai assembly lines.

Aside from having a slight advantage over BMW in terms of brand image in this particularly country, Mercedes also has better bait for those wanting to begin owning a luxury car. 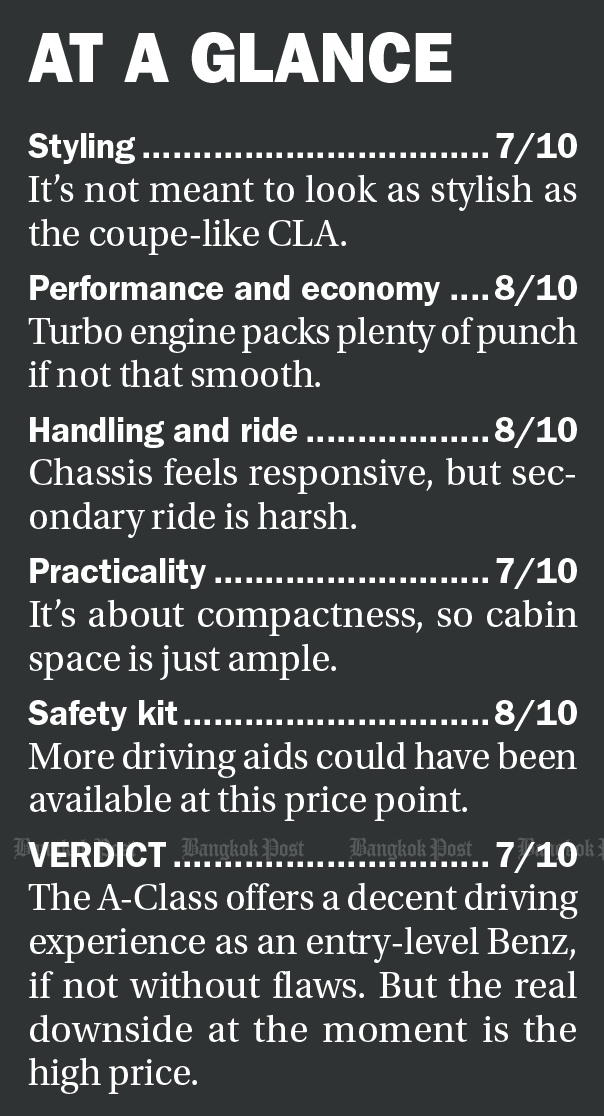 BMW only has the X1 SUV because the four-door 1 Series is currently restricted to only China and the pending 2 Series Gran Coupe, despite being a global model, is likely to command a price premium due to its loftier market position.

Sure, Audi has the A3 sedan to complement the Q3 SUV elsewhere but is aging terribly in its current generation which is why it isn’t being offering through the Thai importer.

This is why Mercedes can consider itself to be in quite a fortunate position in the Thai market due to no competition when it comes to entry-level sedans. And things have just gotten better for them because there’s now a “proper” sedan sitting alongside the CLA. 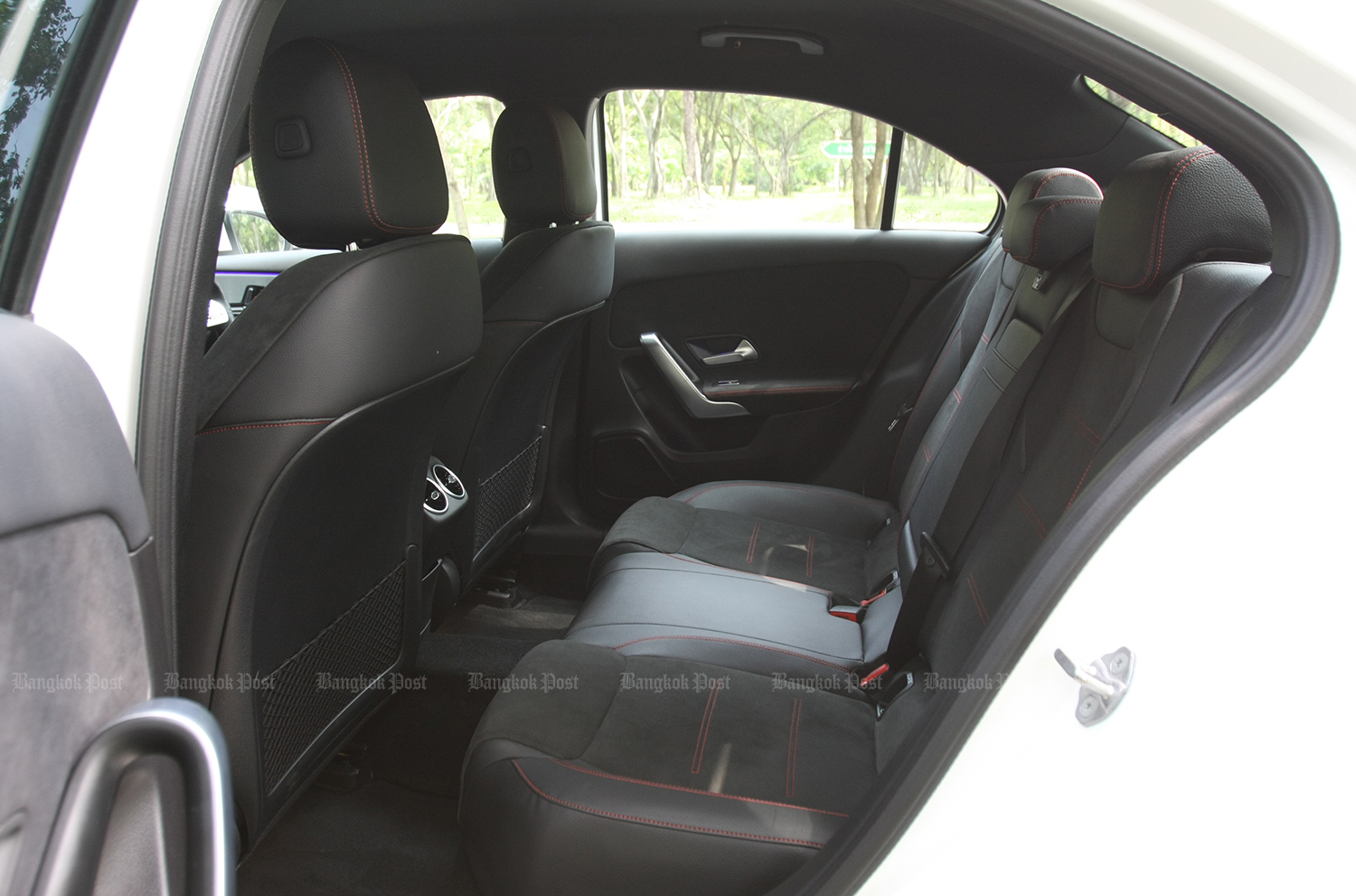 Unlike the CLA which has doors with frameless windows (hoping for that coupe-like effect), the new A-Class has conventional portals and sits below the C-Class in Mercedes’ family of sedans (the other two being the E- and S-Class).

And given that the C-Class is an important model with prices starting at less than 2.5 million baht, it should be a given that the A-Class will be even more crucial for Mercedes in a country that still largely likes sedans.

But as the A-Class has yet to be assembled in Thailand, its imported price tag of 2.49 million baht in A200 form (as tested here) sounds quite illogical when the locally finished C220d can be had for slightly less. This means you need to really like the A200 for what it is if you buy one now.

So just for the day, let’s assume the A200 costs no more than two million baht in knocked-down form given that today’s CLA200 and GLA200 (still based on the previous generation and not with this new A-Class) are priced at that level.

If that’s really the case, then the A200 is quite a nice fit in Mercedes’ lineup even though the car isn’t exactly without flaws. 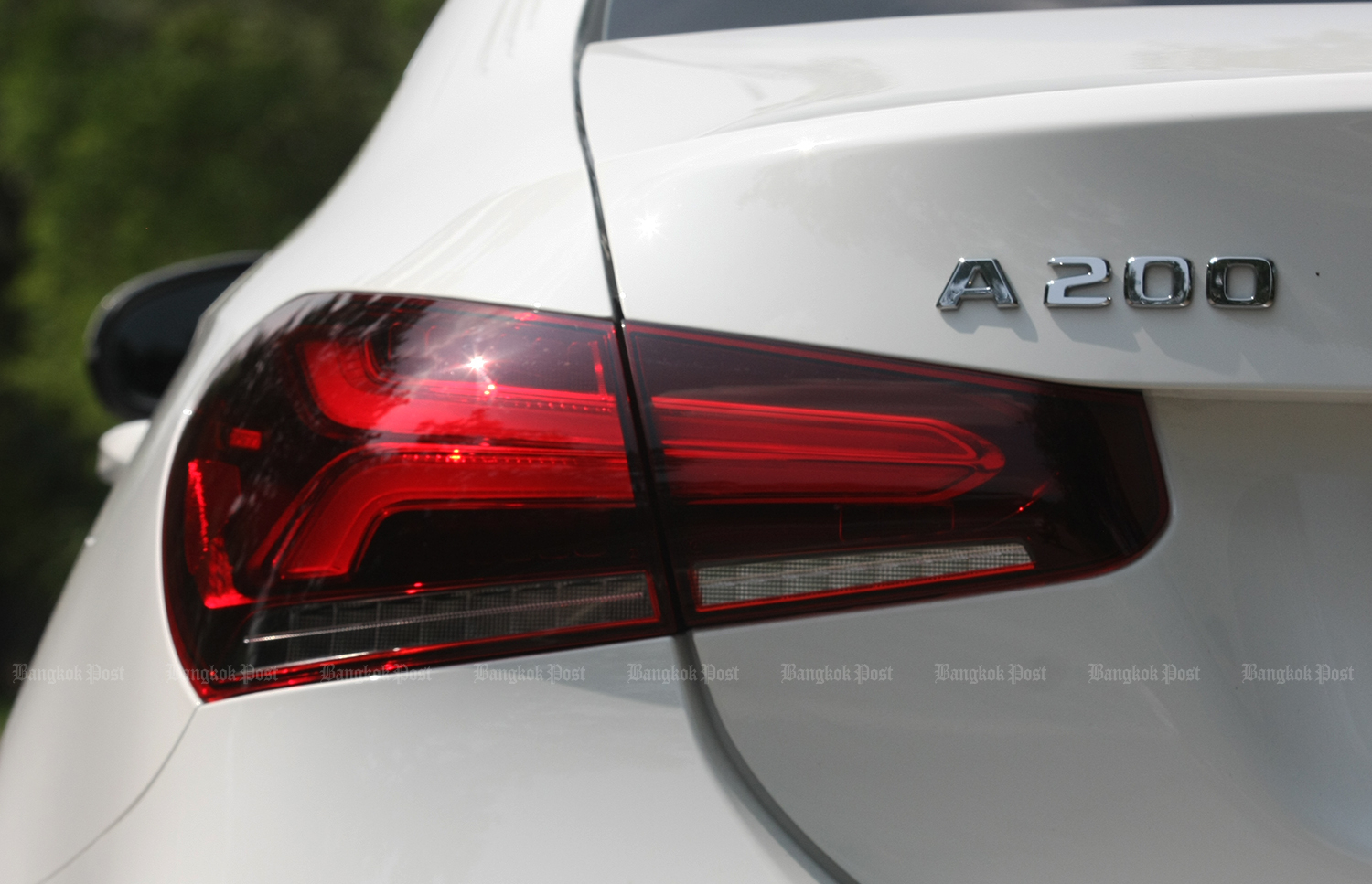 Since the A-Class is a relatively new model, it gains the new design language of Mercedes and looks different from all its three bigger sedan brothers. The chief differentiator are those headlamps.

For some perspective, the A-Class is roughly the size of a C-segment sedan like the Toyota Corolla. But despite a generous wheelbase length, the cabin of the A-Class doesn’t immediately feel spacious. It probably couldn’t be because it has to neatly slot beneath the C-Class in size. 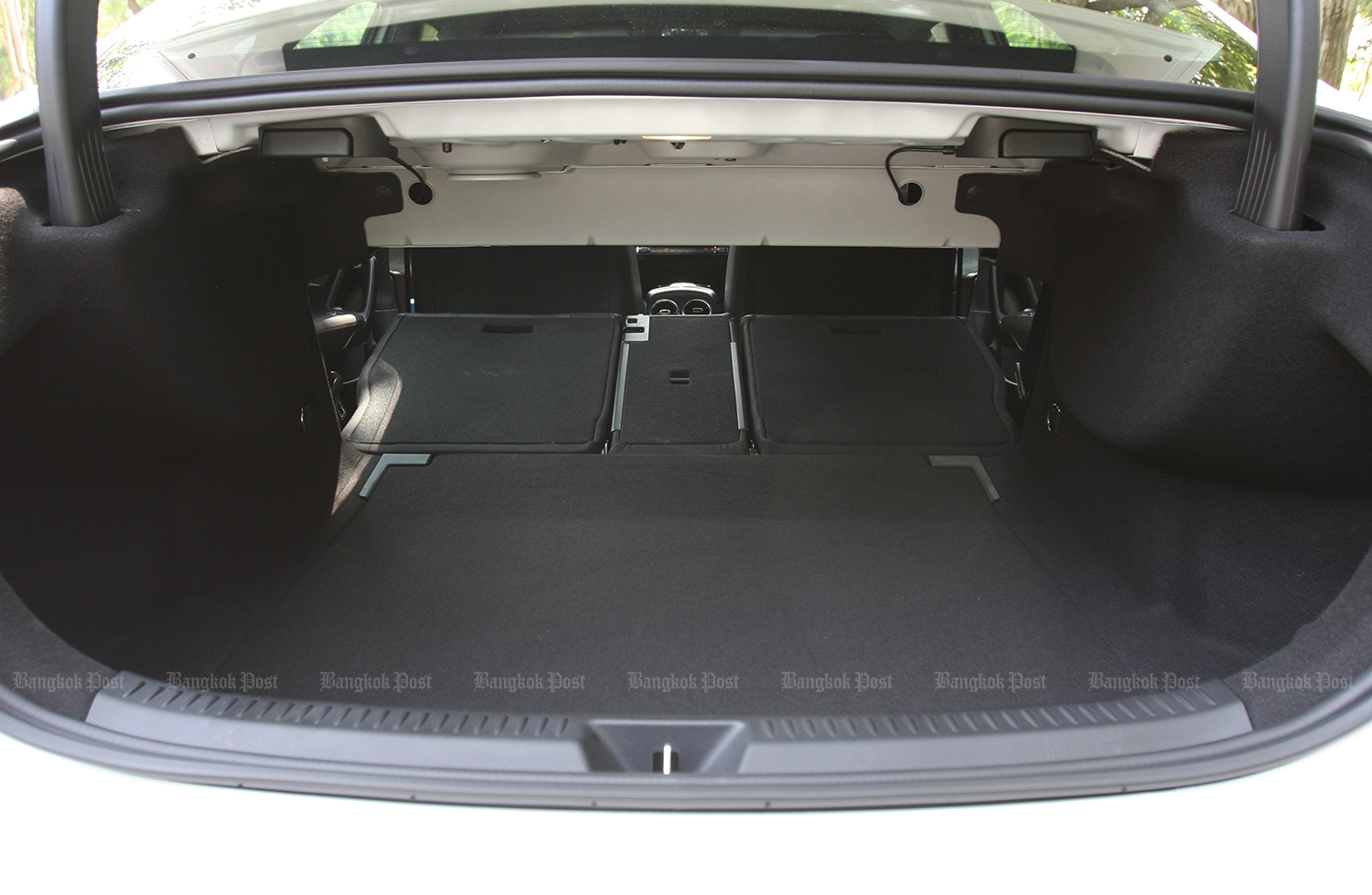 But the A-Class is still decently practical in its own right with sufficient storage holes and a well-shaped boot that can extended by the folding the rear backrests down.

If it’s outright accommodation you need, there’s always the GLA to go for (the new-generation model is slated to come next year).

In terms of design, the A-Class’ cockpit is clearly a generation ahead of not only the C-Class but also the CLA and GLA currently lurking in Thai showrooms. There’s that wide digital screen, easier to use infotainment, more driver-assist tech and cooler-feeling parts and trim. 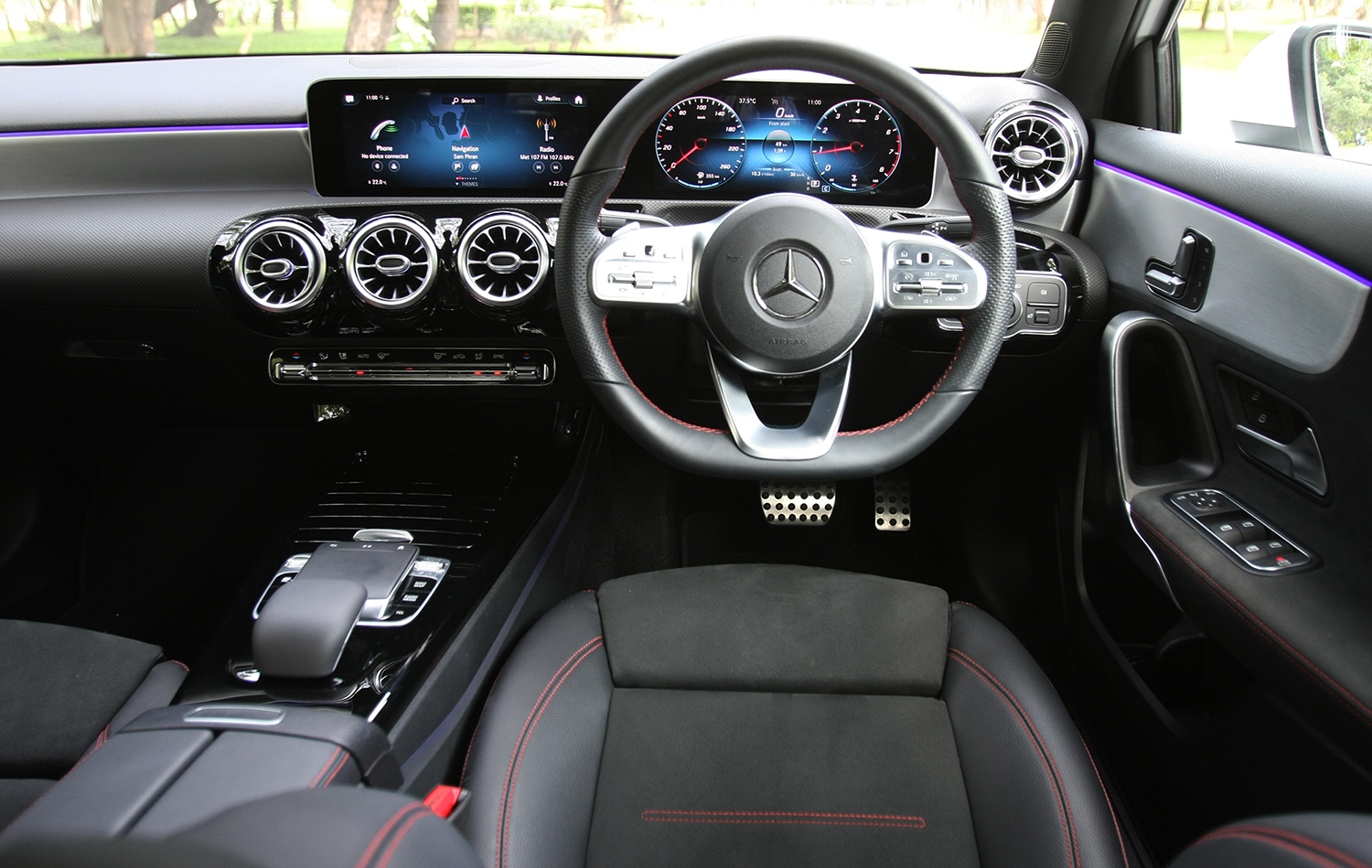 And while the suede-covered seats certainly look avant garde and help lift the premium appeal the A-Class wishes to exude, they are hard to sit in and take away comfort on a daily basis. Actually, overly firm seats had always been a problem in Mercedes’ family of small cars.

Since we’re on it, the 18in wheels and the relatively low-profiled tyres make the secondary ride quite harsh on many of the country’s road surfaces. It’s an affliction quite common in Mercs and Bimmers because Thai tarmac isn’t as smooth as that in Germany.

But the suspension setting in the A-Class is nicely resolved. It doesn’t feel soft and makes high-speed stability much better than in any mass-market sedan of this size (the Mazda 3 tops its Japanese rivals in this aspect). Anybody who has owned the A-Class hatchback of yore with its dreadfully firm primary ride will be delighted with this latest Merc. 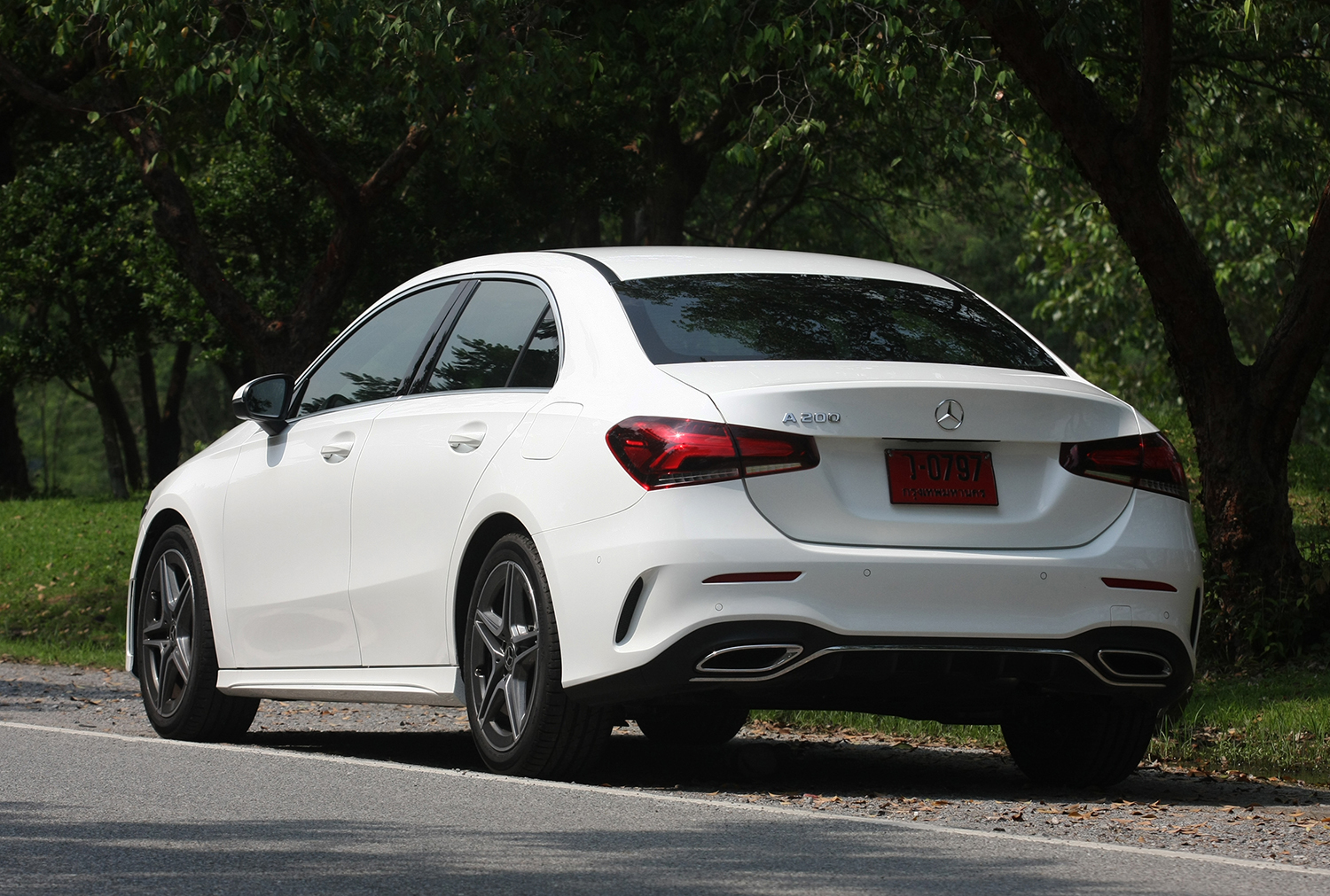 Unlike Mercedes’ three other rear-wheel drive sedans, the A-Class is a front-driver which is something you can feel almost all the time.

But it isn’t a bad thing because the chassis deals quite well with any potential understeer when driven harder than usual. The steering, too, is pleasantly light, direct and quite feelsome.

The A200 is armed by a 1.3-litre petrol-turbo engine which is also used by Renault. Don’t get turned off by the small capacity.

Thanks to forced induction, maximum power comes to a good 163hp. What we’re talking about here is the equivalent of a naturally aspirated 2.0-litre engine (like in that Mazda 3).

And if we’re sticking with that retrospect, the A200’s downsized-engine principle is effective because it feels more lively and economical at the same time. The A200 will make many doubters quite surprised at high speeds when the opportunity arises. 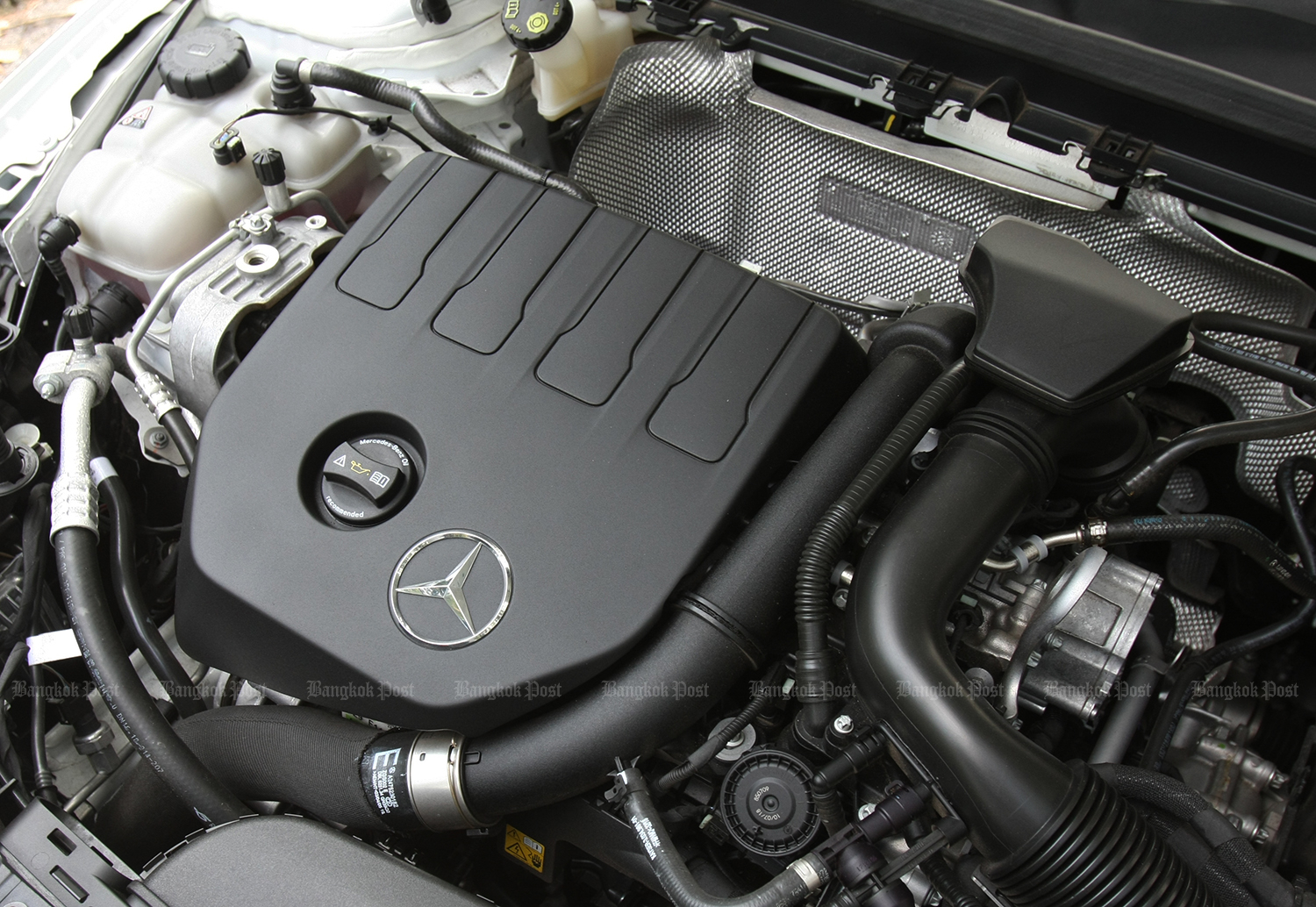 This powertrain is certainly here to stay. However, two downsides include a vocal engine note when pushed and not-so-smooth gear-shifting in full-auto “D” mode when driven enthusiastically.

Of some good news is the availability of a plug-in hybrid system based on this particular engine, badged A250e and already sold in Europe. It should be another nice option for a potential A-Class made in Thailand – should the price stay within the two million baht level.

In the end, as you can see, the A200 is highly likeable if the price is rightly distanced from the C-Class. But what the A-Class dearly needs to suit its urban status and appeal among first-time buyers of Mercedes is more comfort. It might have been a different thing if it was a CLA or some AMG-fettled variant. 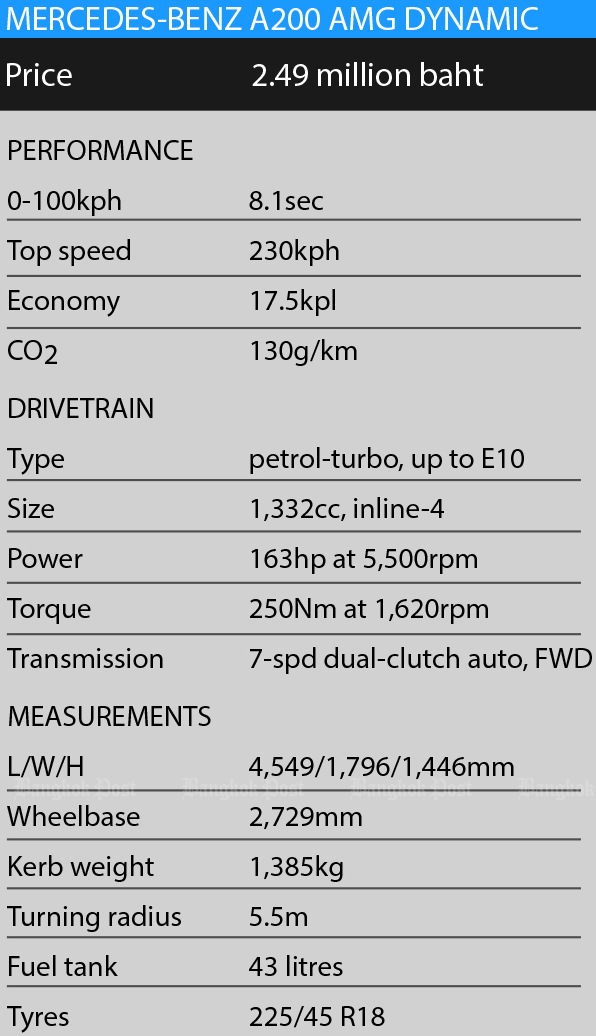 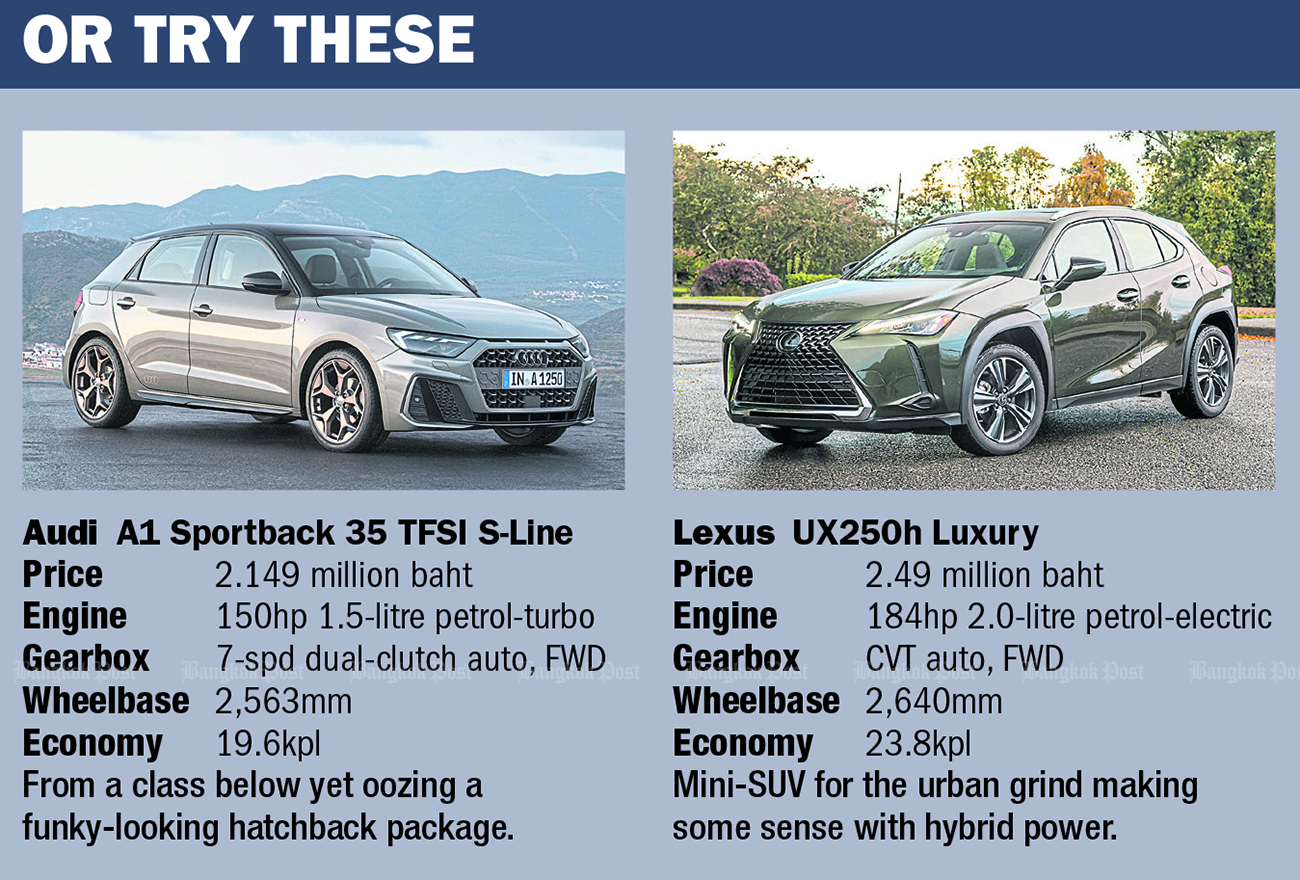 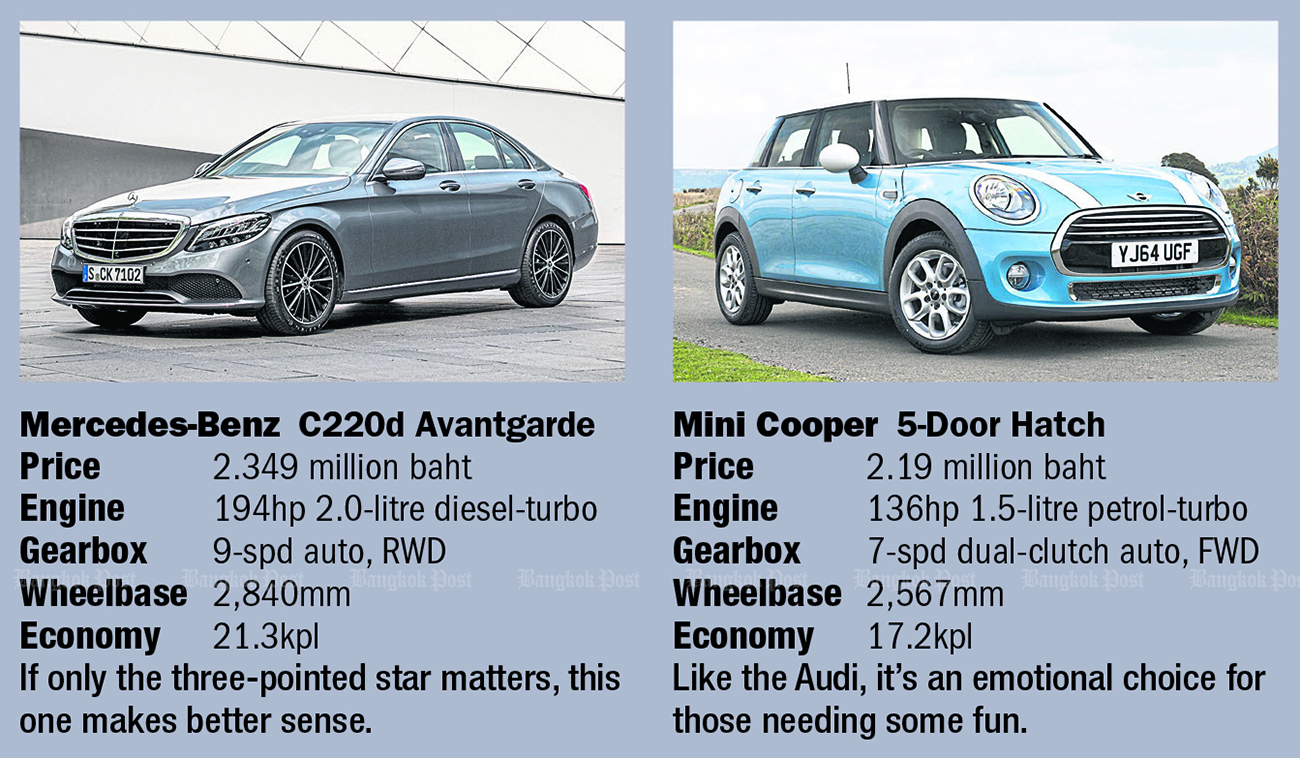