Peugeots are usually decent to drive with the latest 5008 being no exception. But, as ever, there’s a sticking point. 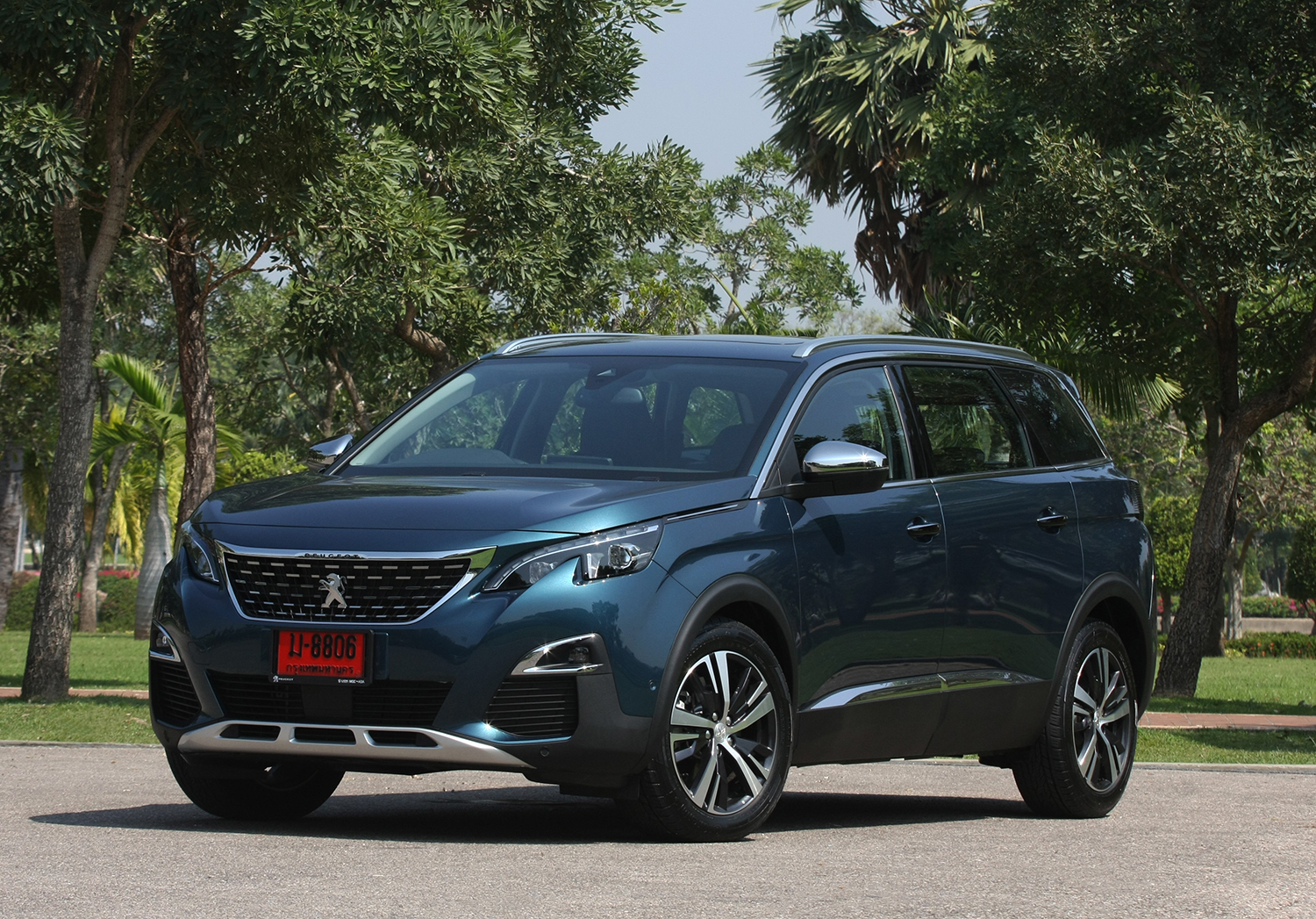 The mass-market car scene in Thailand has always been a tough one as it is firmly dominated by Japanese brands.

Other players, be them from America, Europe or Korea, have mostly come and go no matter how hard they have tried in becoming a new alternative to Thai car buyers.

Peugeot, however, still has hopes left here despite a not so illustrious track record. The latest effort by the French carmaker comes in the form of a new Thai distributor. 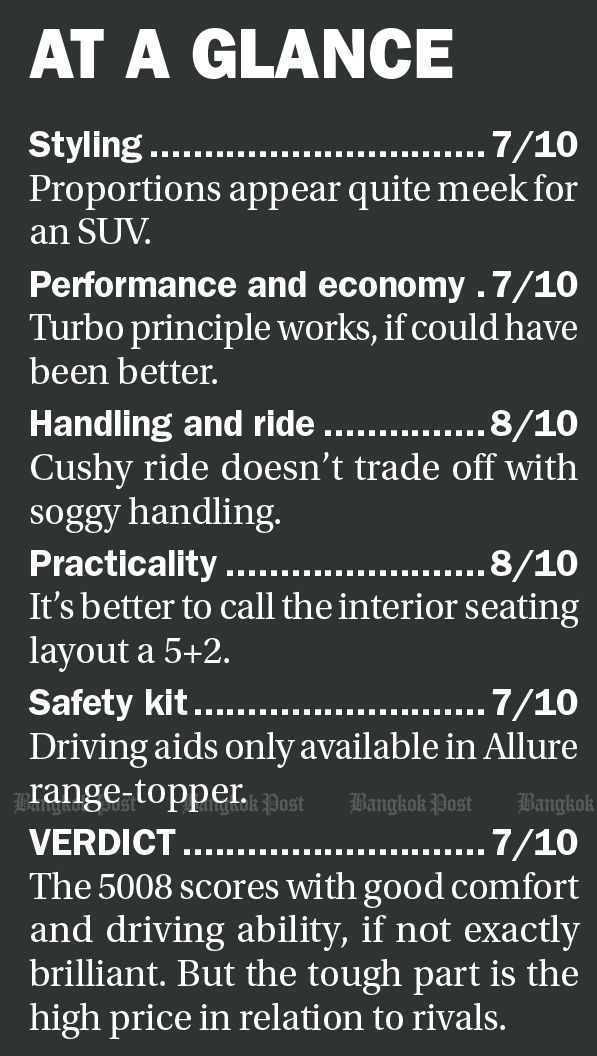 And like in recent years, Peugeot is relying on a Malaysian factory to import vehicles to Thailand via Asean free-trade perks. It needs such a facility because all major Japanese players build their cars in this region for lowest prices as possible.

To ensure the relevance of products, Peugeot is wasting no time in offering two SUVs at the same time even though they aren’t particularly brand-new: 3008 five-seat SUV and the slightly longer 5008 seven-seater, as tested here.

In fact, these two compact SUVs are so similar in looks and technology that the key differentiator is no other than the number of seats, aside the badges and some small design details. Even the interiors are the same. 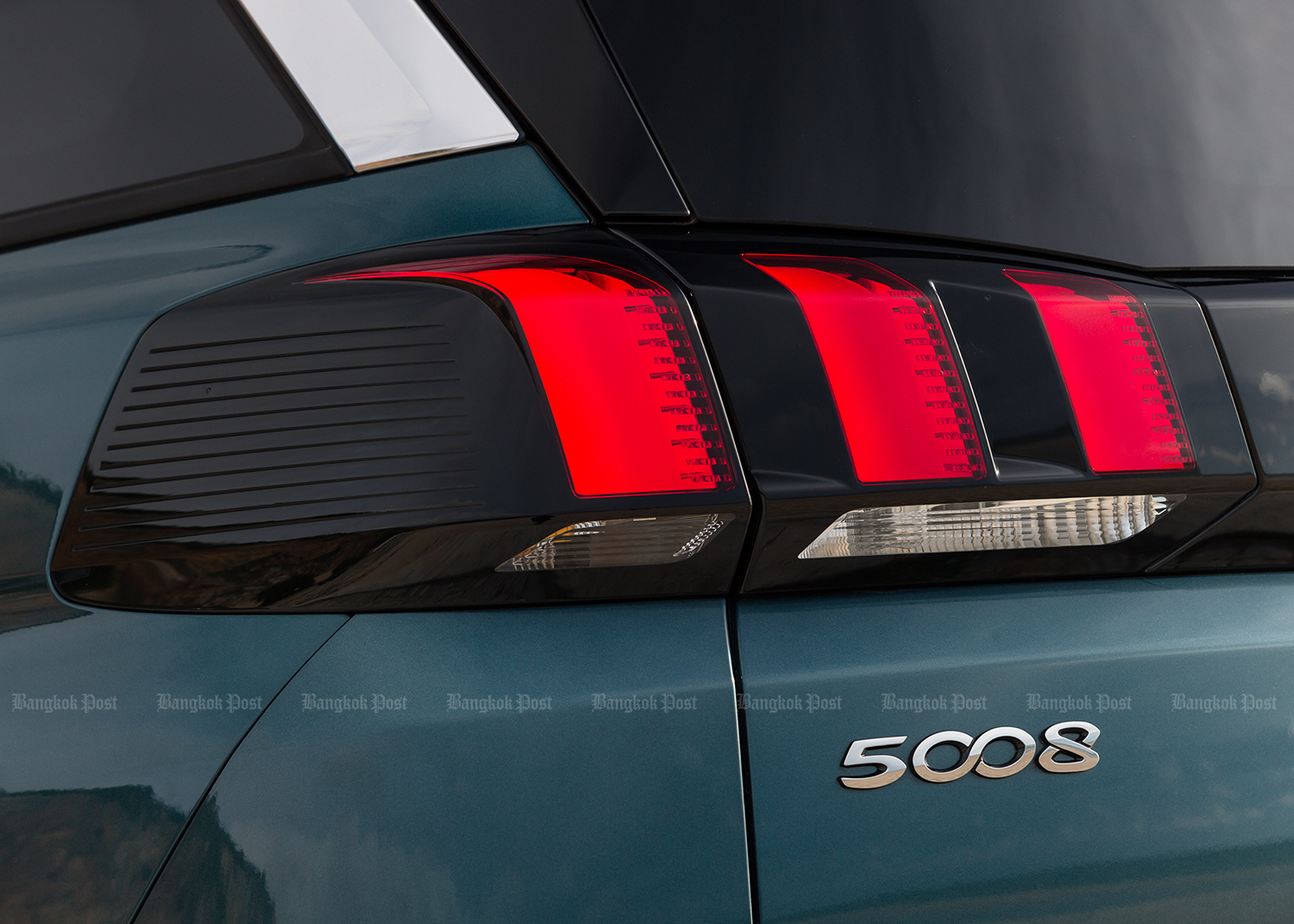 As European brands tend to be ahead of those from Japan in terms of tech, the 3008 and 5008 gains on the engine-downsizing with turbocharging principle. The drivetrain is the 167hp 1.6-litre petrol-turbo and six-speed torque-converter automatic driving just the front wheels.

This makes these Peugeots natural rivals for five-seat SUVs like the MG HS, Mazda CX-5 and Subaru Forester, plus seven-seat variations such as the Honda CR-V and Nissan X-Trail.

Which immediately brings us to the first downside of the 5008. Rather than being priced to compete, the 5008 is loftily priced at 1.749 million baht in Active spec. Buyers wanting LED lights, a sunroof and some driving aids need to fork out an extra 150k for the Allure package.

The 3008 receives the same spread in specification and price as in the 5008 with a 200k saving in both cases. So with nothing for less than 1.5 million baht in the mass-market SUV playground, Peugeot really isn’t into the game yet. 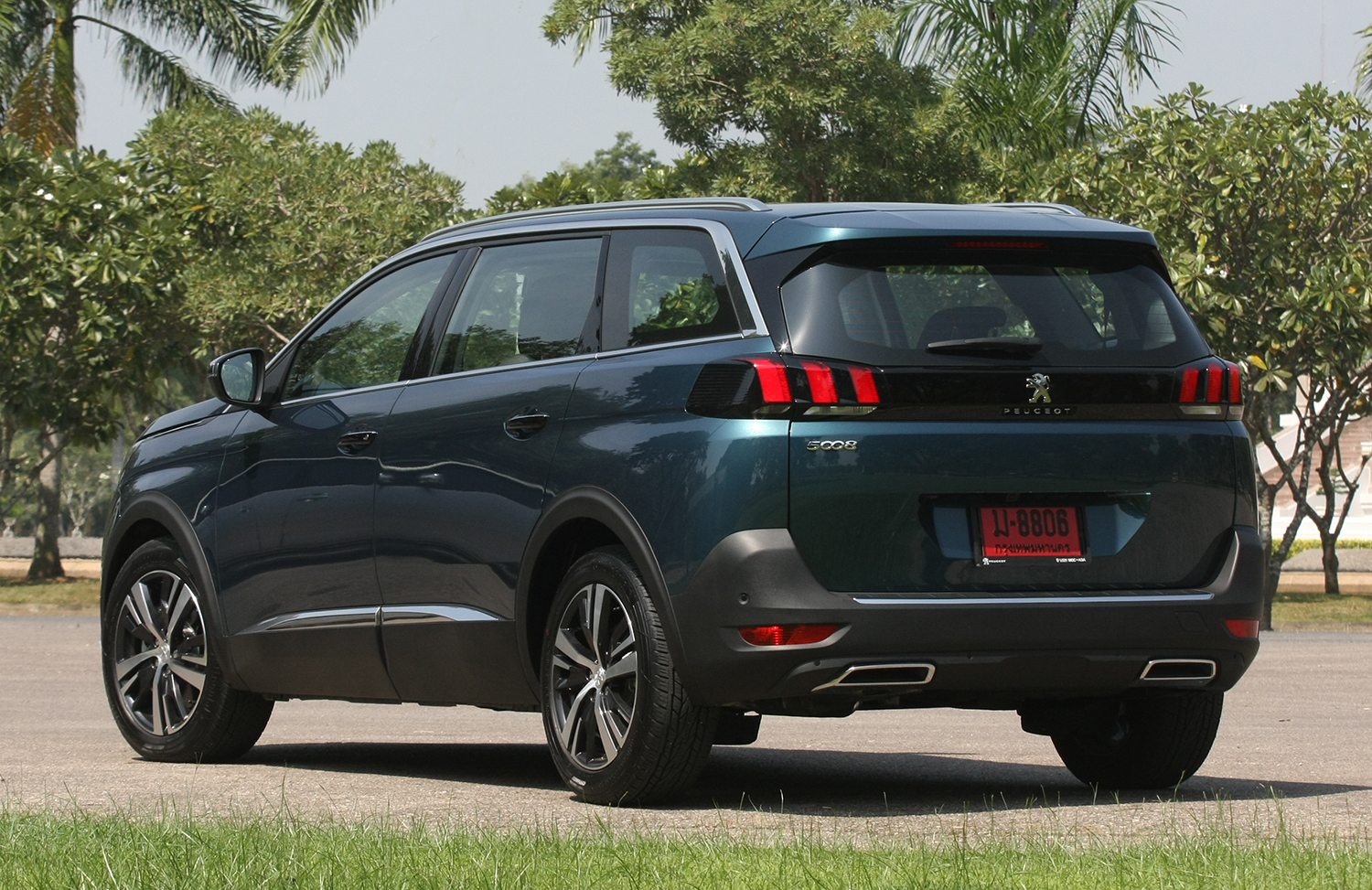 You may wonder why the comparatively high prices when the vehicles aren’t subject to import duty. Well, that has always been a problem with Peugeot. The last importer was selling the Toyota Corolla-sized 408 at prices of the Camry sedan.

Which is quite a pity because the 5008, for one, has some good things to talk about. Look at its appearance, as an example. Although it doesn’t have the butch looks of a go-anywhere SUV, the 5008 does feel contemporary enough to fit the so-called crossover bill.

Better, too, is the inside where Peugeot’s latest driver-oriented theme can be found. It feels instantly special the moment you hop into the driver’s seat with four clearly identifiable elements: console switch cluster, infotainment screen, digital instrument panel and flat-bottomed steering wheel. 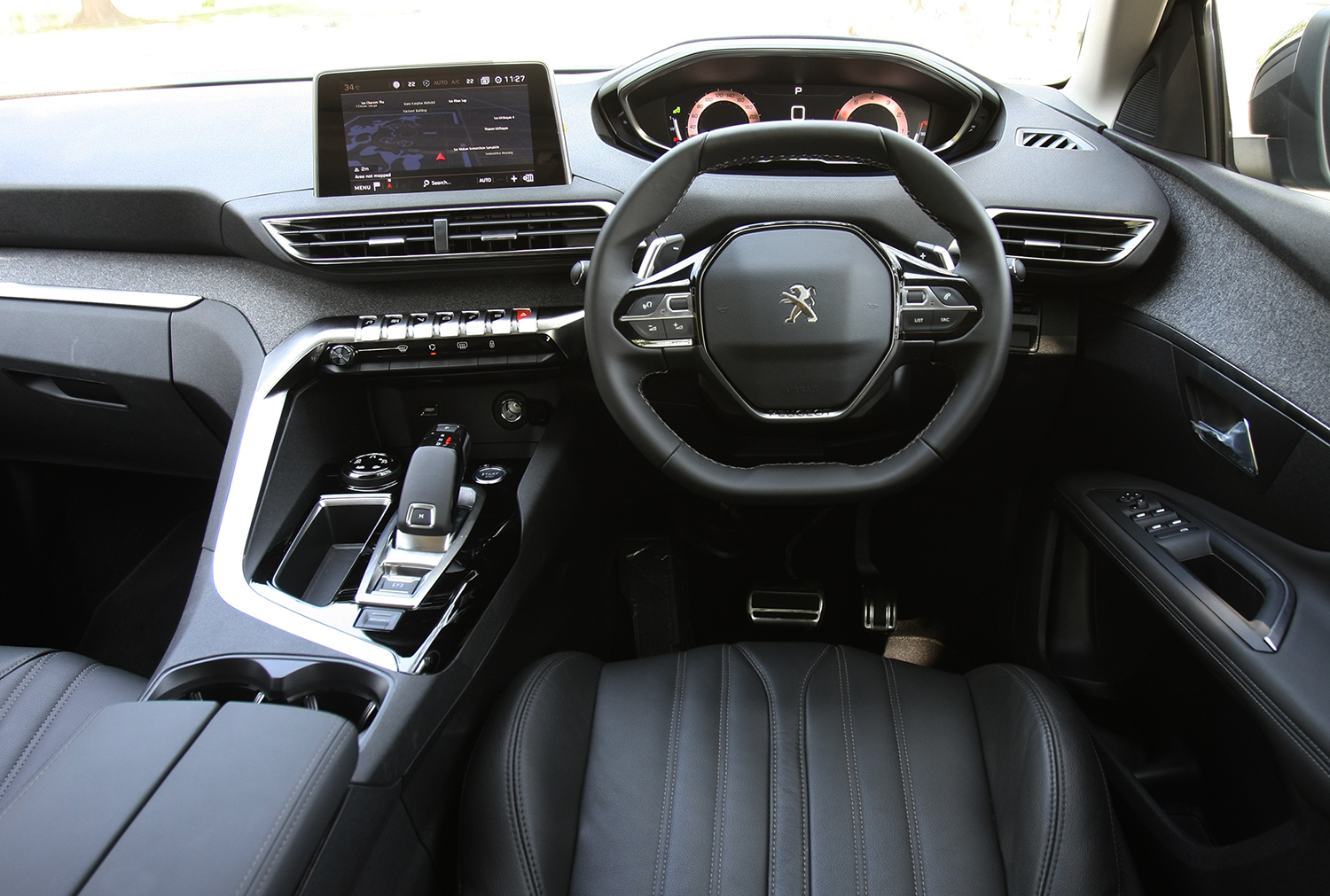 Even if not exactly brimming with luxury, some cloth trim and soft-touch plastics make the overall interior ambience avant garde and quite distinctive from the competition.

The seats themselves are tailored nicely and cushy to sit in, although those for the sixth and seventh passengers are only suitable for very small children.

But this 5+2 cabin is versatile, with all kinds of folding possibilities available for the user to choose from. Apart from having middle-row seats that can tuck away in three parts, the bench in the last tier neatly disappears into the boot floor to make way for a truly spacious five-seat interior (if the 3008 isn’t big enough, so to speak). 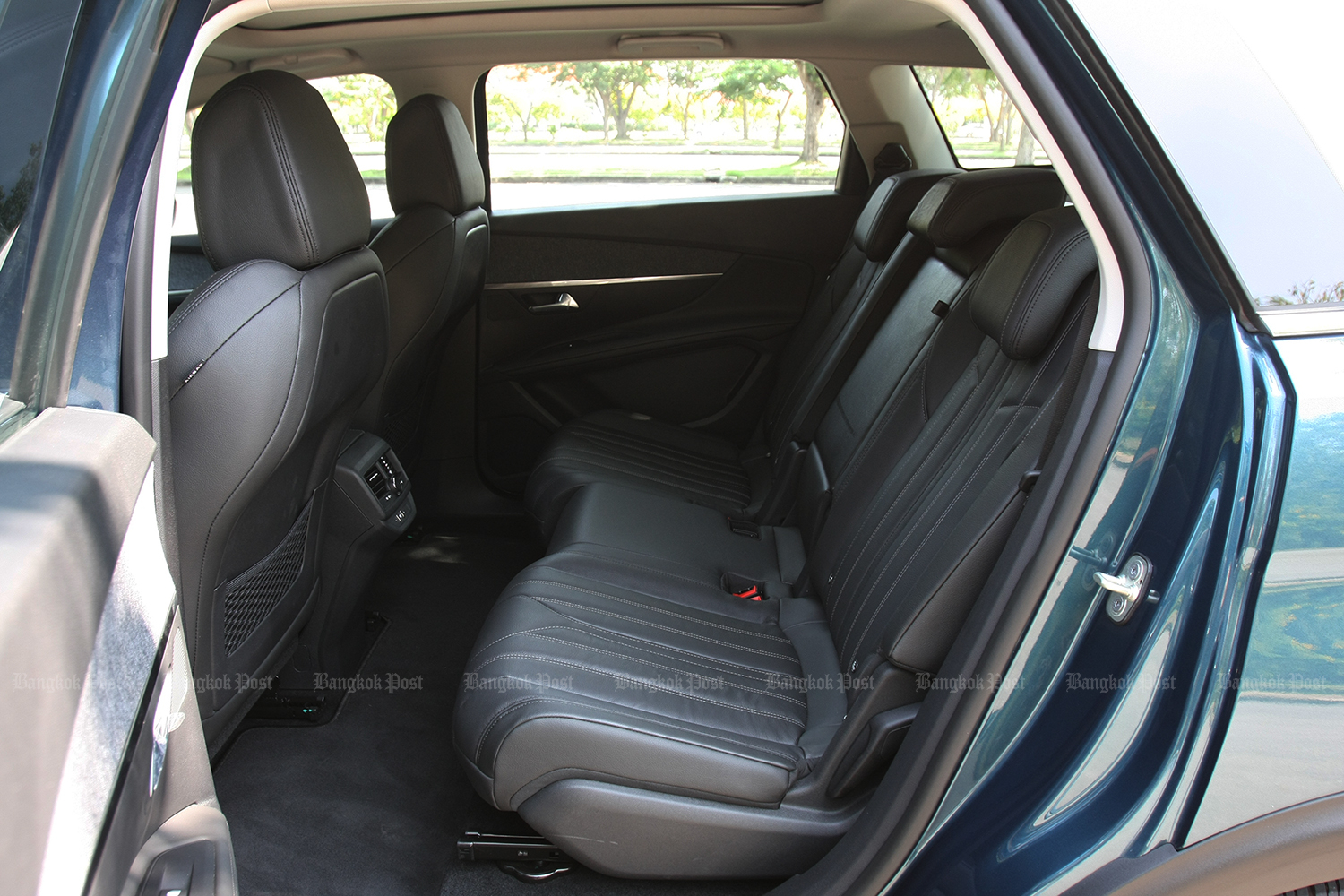 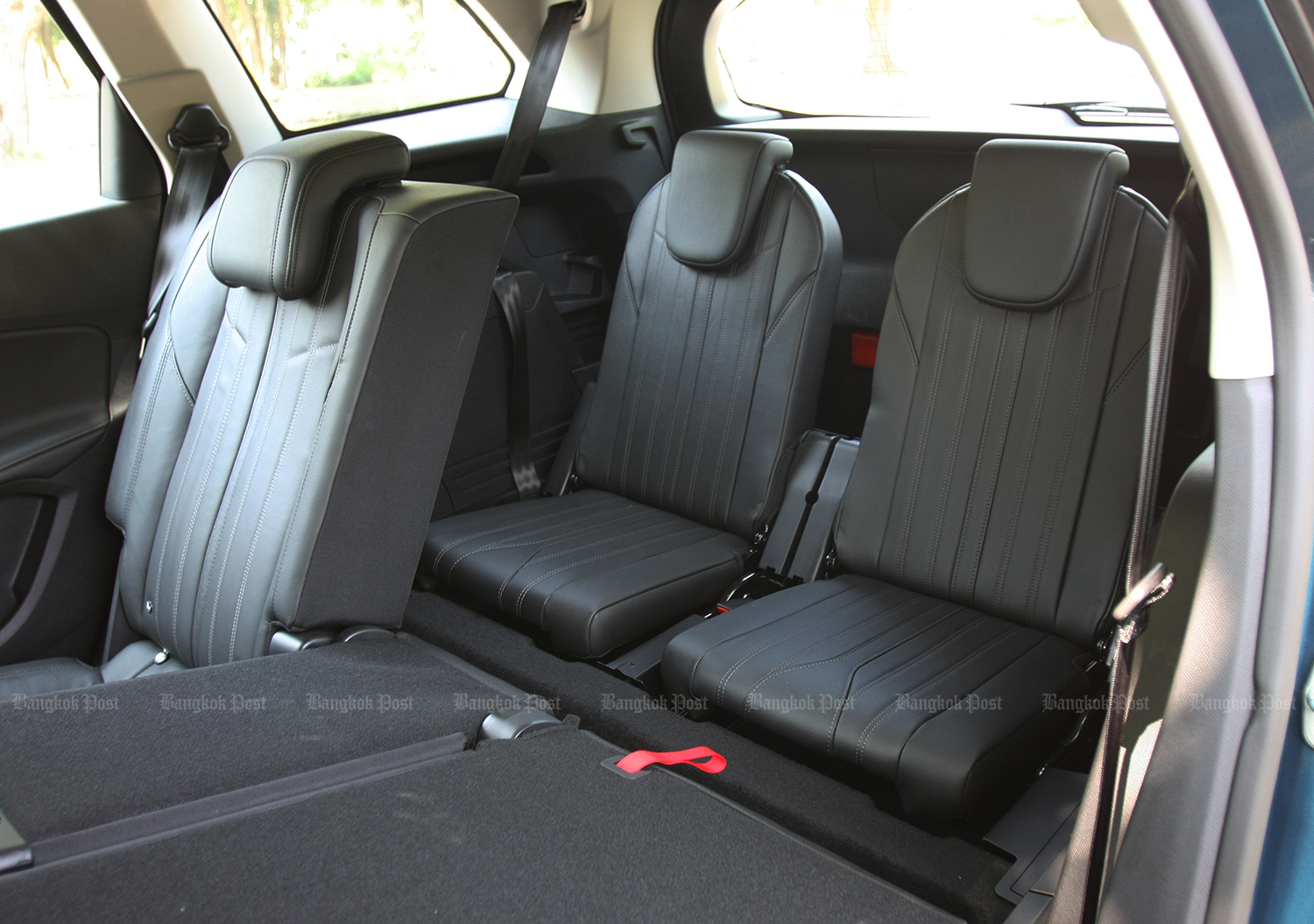 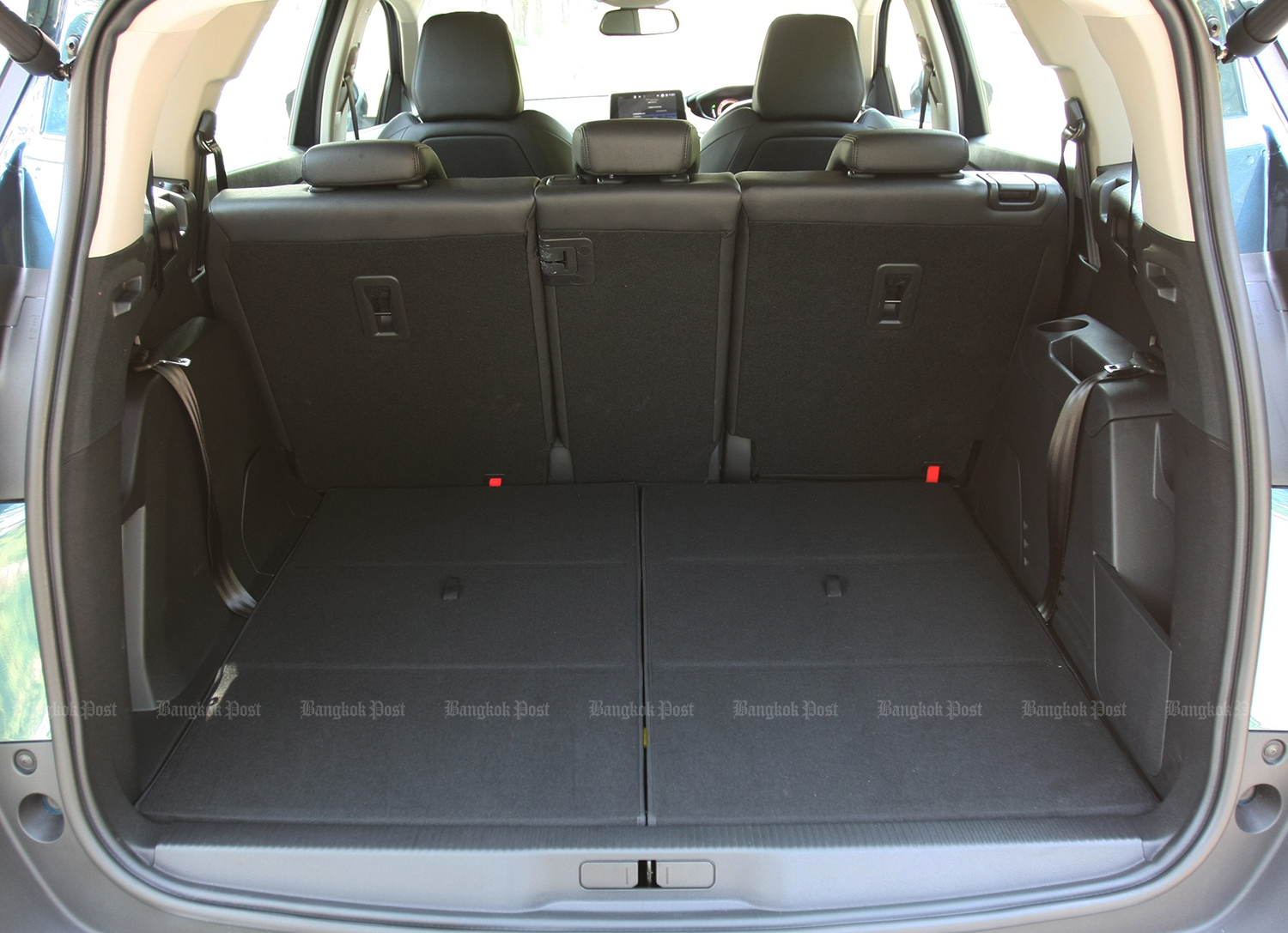 The other nice thing in the 5008 over its competitors is how it drives. In the typical fashion of French (any many other European) cars, the chassis has been engineered to be both comfortable and stable. A cushy low-speed ride hasn’t come at the expense of soggy handling on highways.

What also impresses is how nicely cocooned the driver feels in the cockpit with that compact and swiftly-geared steering wheel to hold onto. It almost feels veering a car in Play Station.

Complementing the rather fine driving characteristics is a drivetrain that works well at real world speeds. The turbo spools in early at low revs making the 5008 a doddle to drive around town and when overtaking others on two-lane roads.

But the overall performance it has to offer can’t be described as totally sufficing. The 167hp four-pot tends to run out of breath quite quickly when pushed in an enthusiastic manner. 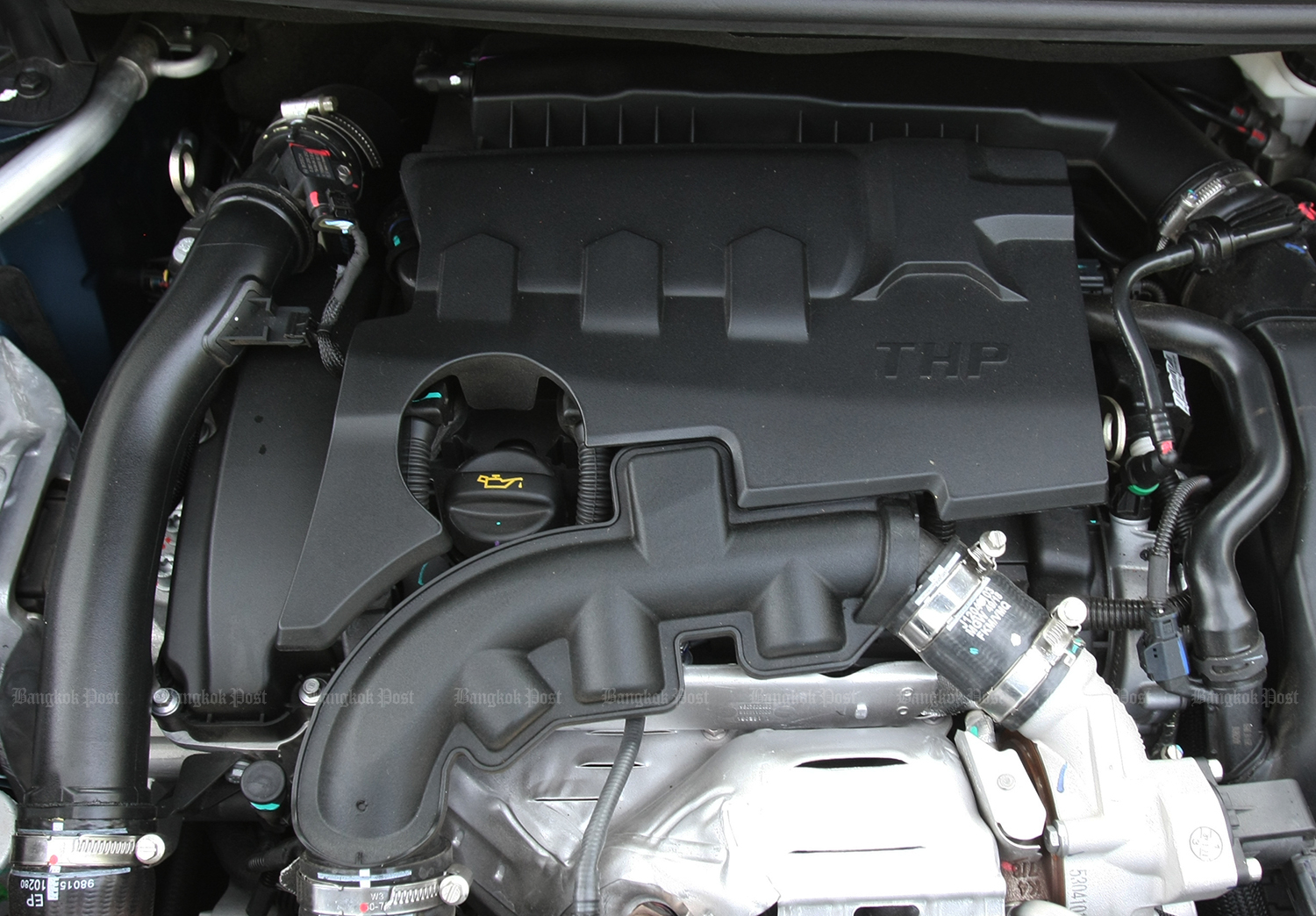 Of course, SUVs aren’t usually driven so rapidly. But just to let you know: a 180hp version with eight-speed auto has already superseded this Thai-spec combo in Europe.

The 5008 only has two driven wheels up front which is quite fair given that users of SUVs rarely head for the grit. Even so, there’s a drive-mode selector for enhanced driving on loose road surfaces which adjusts parameters using chassis electronics.

Nevertheless, the 5008 (and its smaller 3008) is more about the concrete stuff where it manages to deliver a reasonable combination of comfort and handling finesse that can’t be readily found in most of its opponents.

But, as said earlier, the 5008 might just be too ambitiously priced to really be taken seriously by any potential punter of a mass-market SUV. If it was about some hi-tech option like a plug-in hybrid, it might have been a different thing. 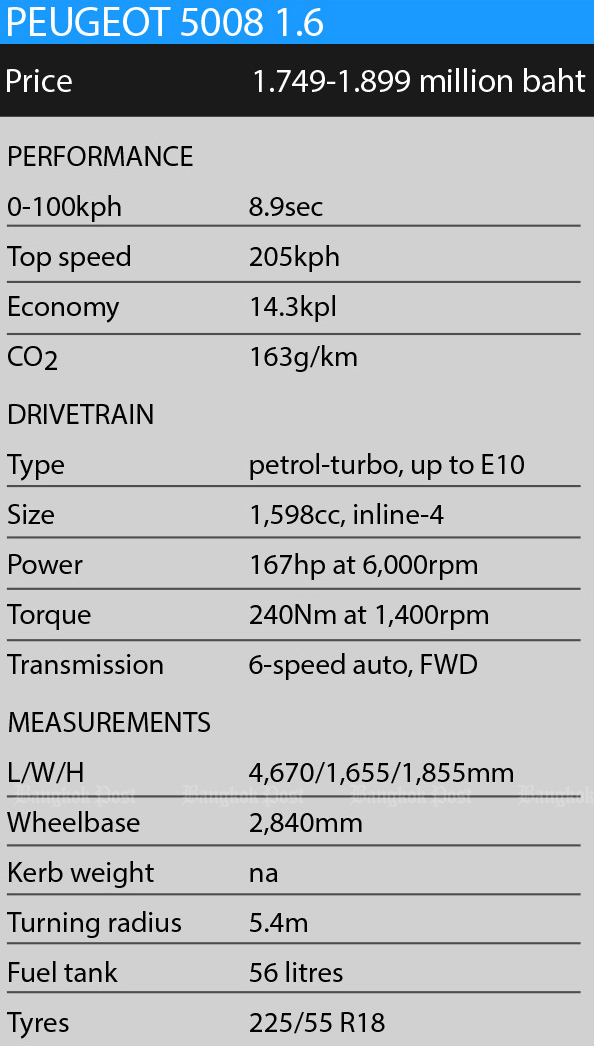 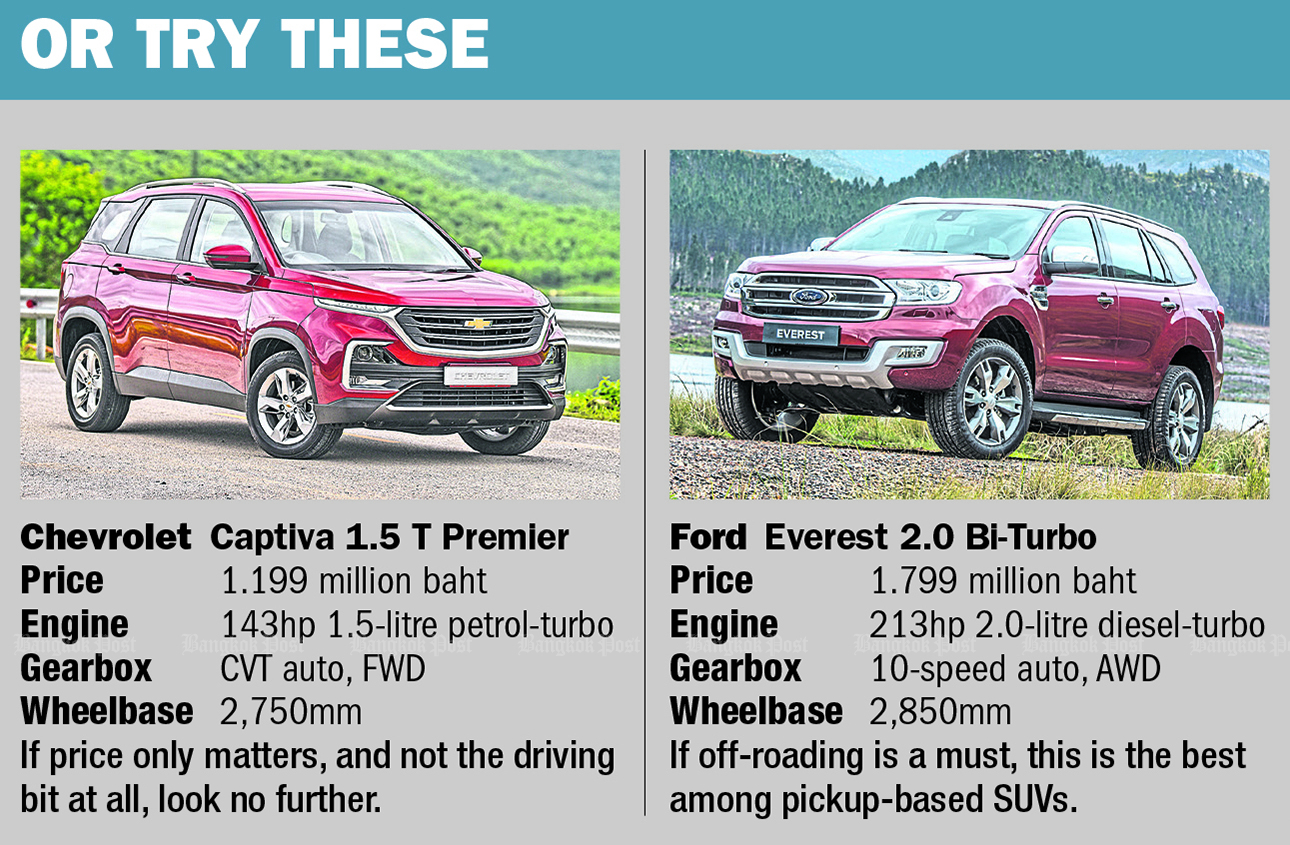