Mazda's three-row SUV makes pickup-based variations feel so yesteryear. Something like this should have come ages ago. 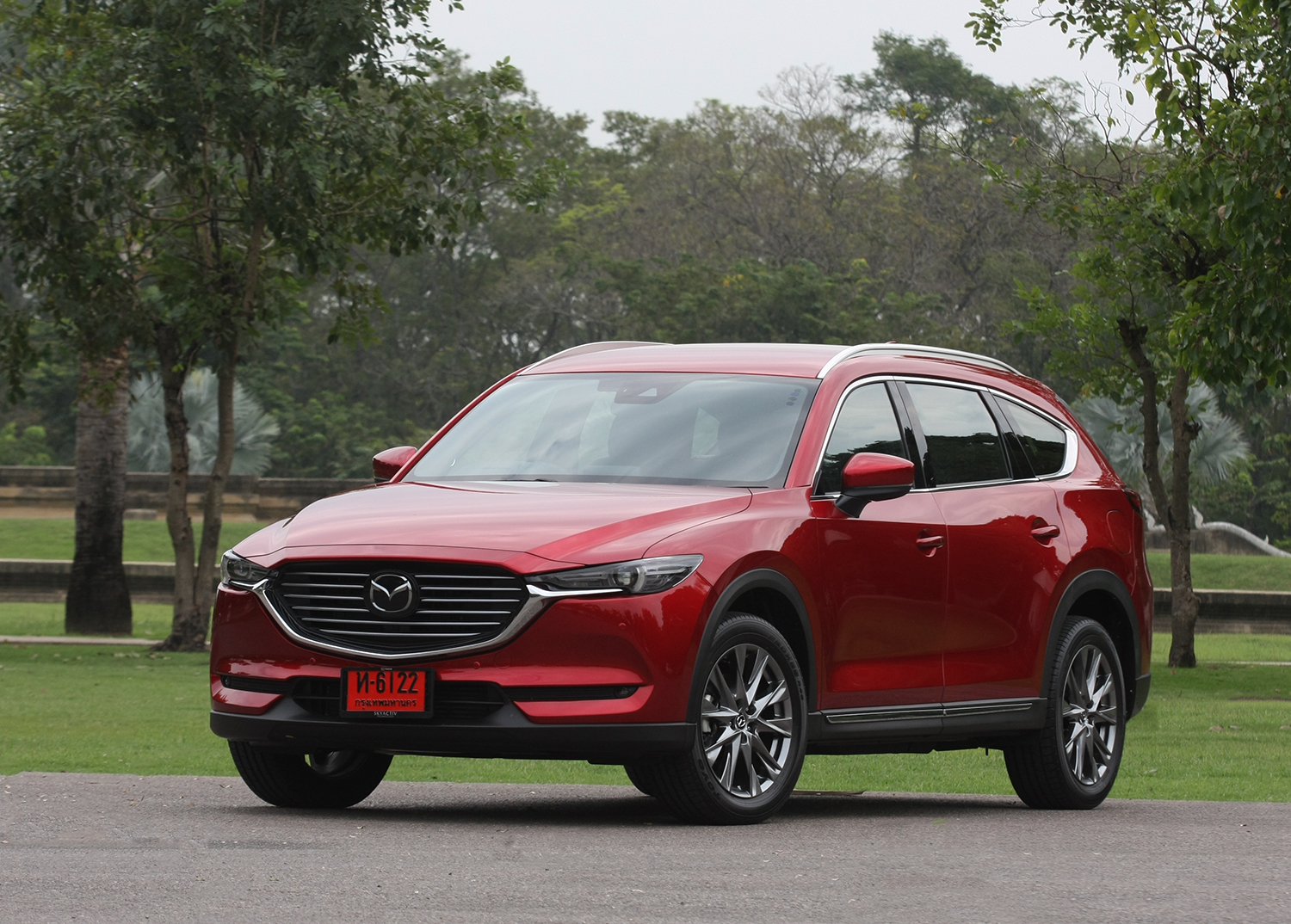 For many years already, pickup-based SUVs like the Toyota Fortuner have been highly popular in Thailand due to their cavernous packages offered at prices of smaller car-based counterparts such as the Honda CR-V.

A reason for their price advantage is the existence of the so-called PPV (pickup passenger vehicle) tax rate which, in the earlier days, was lower than those applied on passenger cars.

That may not necessarily be the case today because petrol engines in car-based SUVs made compatible with E85 gasohol or electrification can attract low rates of anywhere between 4-20%; PPVs face 20-25%. 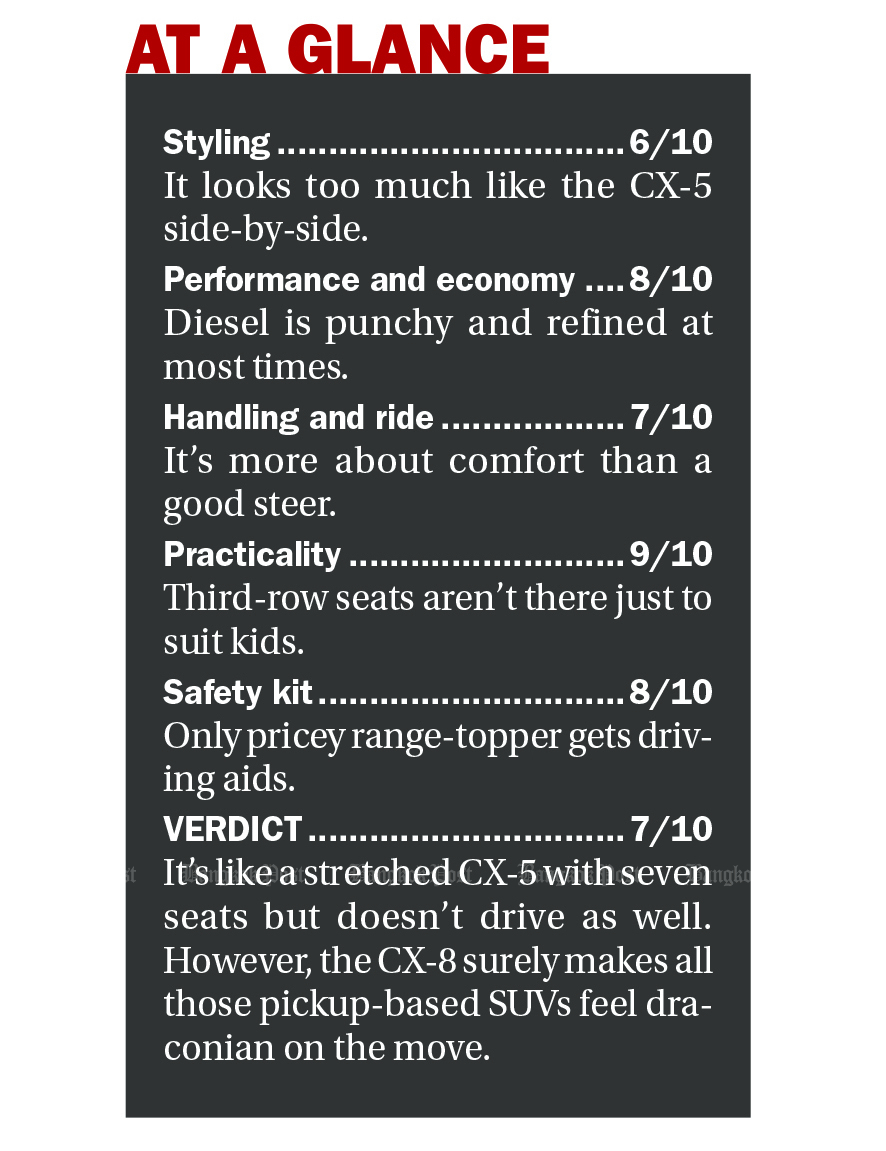 Had it not been for taxation, the Fortuner and its likes wouldn’t have really enjoyed the spoils. In fact, such SUVs with chassis-on-frame bodies are designed more for the grit, but everybody in Thailand knows (if they do) that this is meaningless for buyers who’d still buy one for the school run.

Which is why the Mazda CX-8 ought to be a remedy for this specific group of customers thanks to its unibody, aka monocoque, platform yielding merits of stiffness for better handling and ride on the sealed tarmac.

There used to be some reasonably spacious seven-seat SUVs in the past like the Hyundai Santa Fe, Kia Sorento, SsangYong Rexton and Subaru Tribeca.

But all of these imports were withdrawn from Thai showrooms due to prices well over two million baht. At this point, only Subaru is showing some interest in building a latest one in the future at its new Thai facility based around the US-only Ascent. The Malaysian-built CX-8 isn’t just some SUV with a 5+2 interior, which can be found in the CR-V, Chevrolet Captiva, Nissan X-Trail or Peugeot 5008.

Glance at the spec sheet and note the CX-8’s generous wheelbase length of over 2.9m. It’s very much like a stretched CX-5, in the same vein (but by a smaller margin) how the 5008 is to the five-seat 3008.

Mazda’s largest SUV can take adults in the third-row seats which, alternately, can disappear into the floor to make way for a large boot. Such versatility is not readily available in most pickup-based SUVs.

Mazda has gone a step further with the introduction of two large seats in the middle row attempting to woo some chauffeur-drive owners.

However, this 2+2+2 matrix is only sold in the 2.069 million baht XDL Exclusive trim (as tested here) which also nets you all-wheel drive and a set of driving aids Mazda is promoting in the CX-8.

The more basic XD variant has only front-wheel drive and 2+3+2 seat configuration costing 1.899 million baht, around 400k more than a similarly specified CX-5. That’s quite a margin for two extra seats. 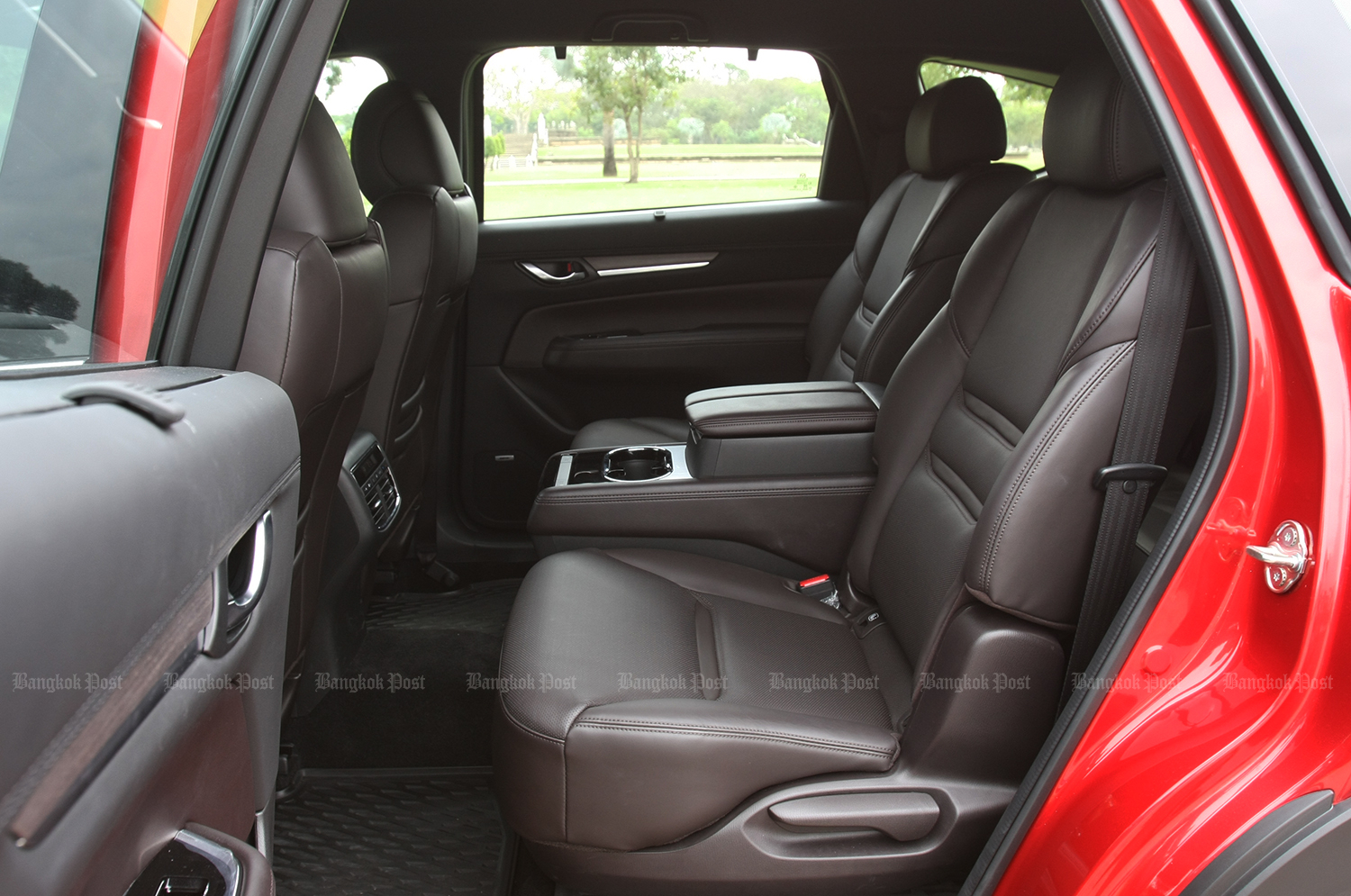 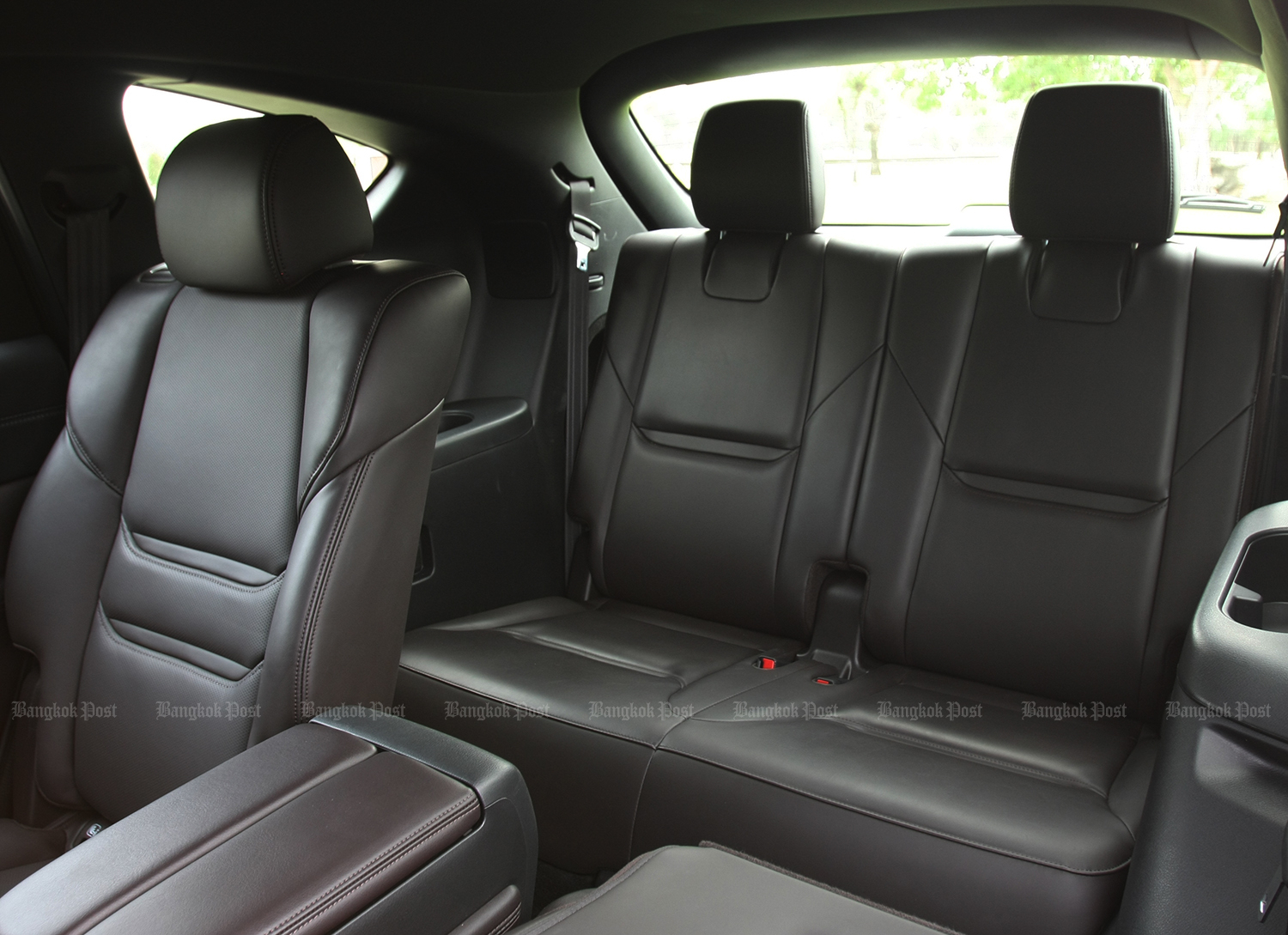 While the interior is spacious and versatile, it doesn’t really feel that modern mostly because the CX-8 isn’t that new anymore in its current generation. The analogue instrument panel and small-ish infotainment screen looks quite old.

In fact, so much of the fascia (and the exterior) looks just like in the CX-5. Again, this scenario mirrors that of the Malaysian-finished 3008 and 5008 SUVs.

Let’s not forget that the CX-8 has been introduced in Japan since 2017 and has only reached the Asean assembly line recently.

But against those pickup-based SUVs, the CX-8 is ahead in terms of perceived quality, apart from the aforementioned levels of interior space and versatility. 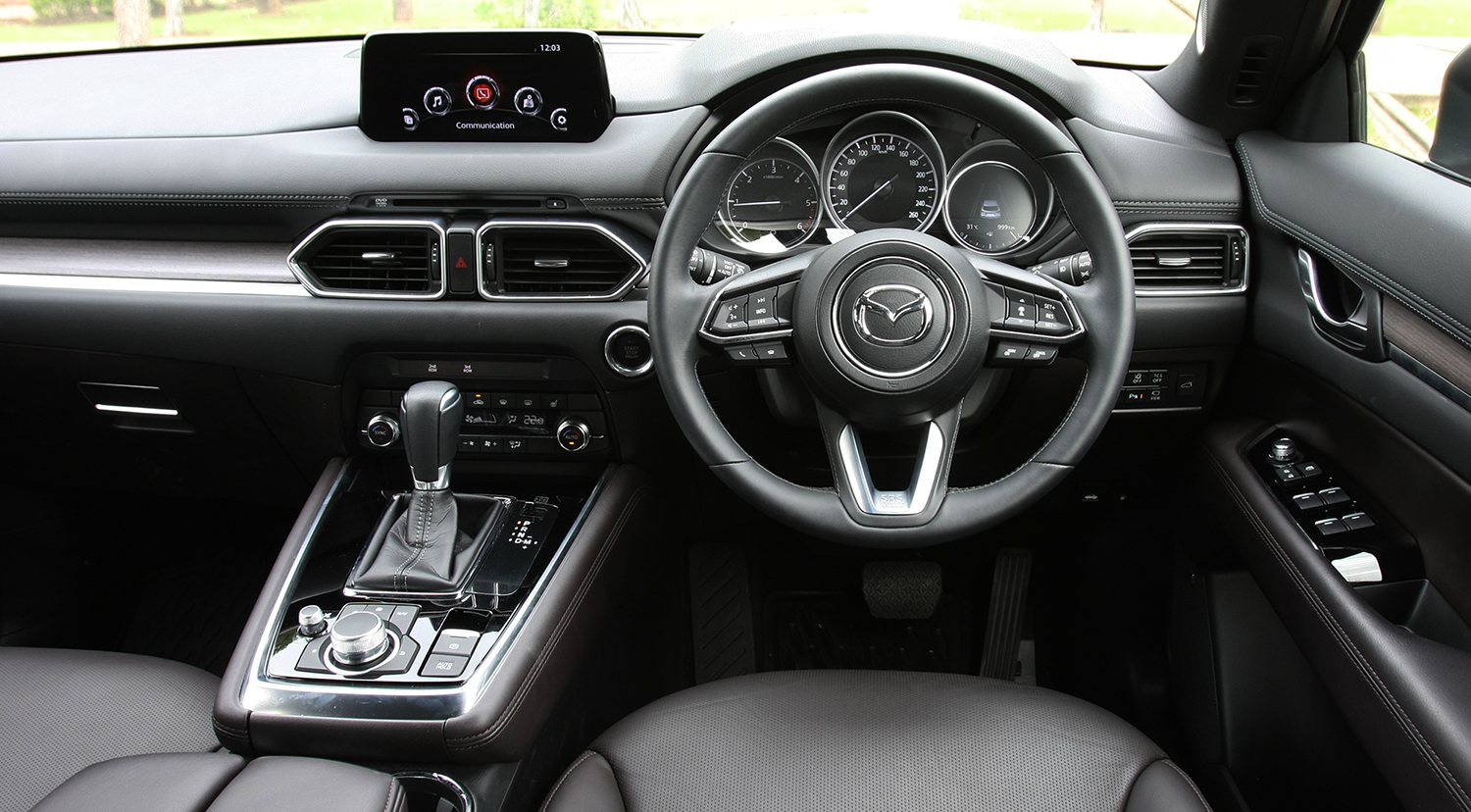 The next thing the CX-8 has to boast about is the engine. While the 2.5-litre non-turbo petrol (which we have yet to drive) is probably best left as a price-led CX-8 at 1.599 million baht, it’s this 2.2-litre diesel-turbo we’re testing here that beckons.

Of course, it’s the familiar unit used in the smaller CX-5. But with some tweaks here and there, the diesel in the CX-8 produces 15hp more at 190hp.

As a result, the CX-8 is never short of grunt with plenty of it being available in both city and highway driving. It certainly suits this seven-seat recreational package and makes those found in pickup-based SUVs crude, noisy and less fuel-efficient. 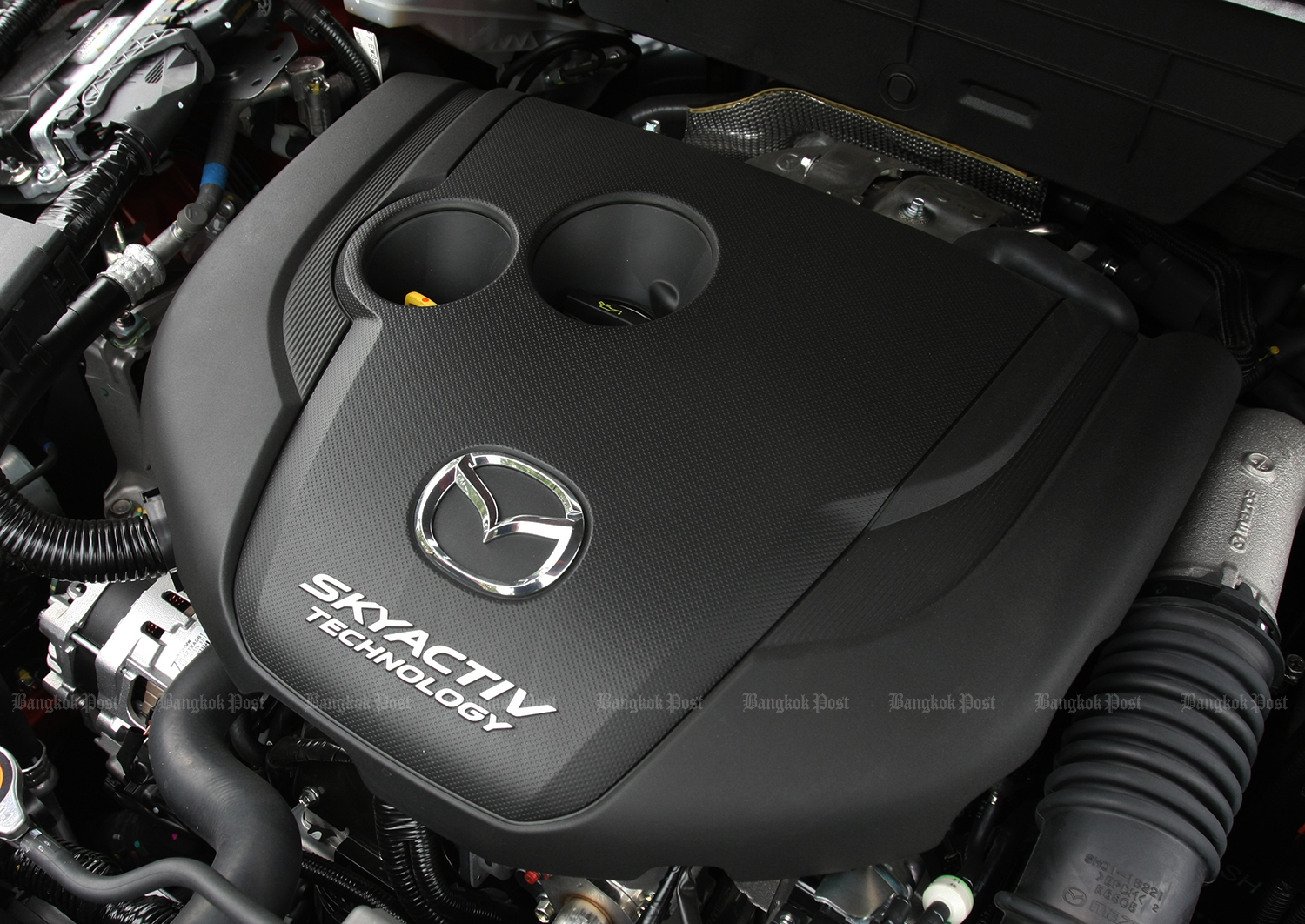 The same can be said for the driving characteristics in which the CX-8’s ride is smoother and more controlled, not to mention its easier handling.

But against the CX-5, the CX-8 can match it for sharpness and involvement. But what the CX-8 does better than in its smaller brother is cruising refinement.

Having all-wheel drive available in the CX-8 appears to be a boon given its large body, but Mazda seems to be content with just fitting it into this range-topper.

It’s perhaps a fair move because, as said in the beginning, SUV buyers in this part of the world hardly venture anywhere far from their comfort zone. 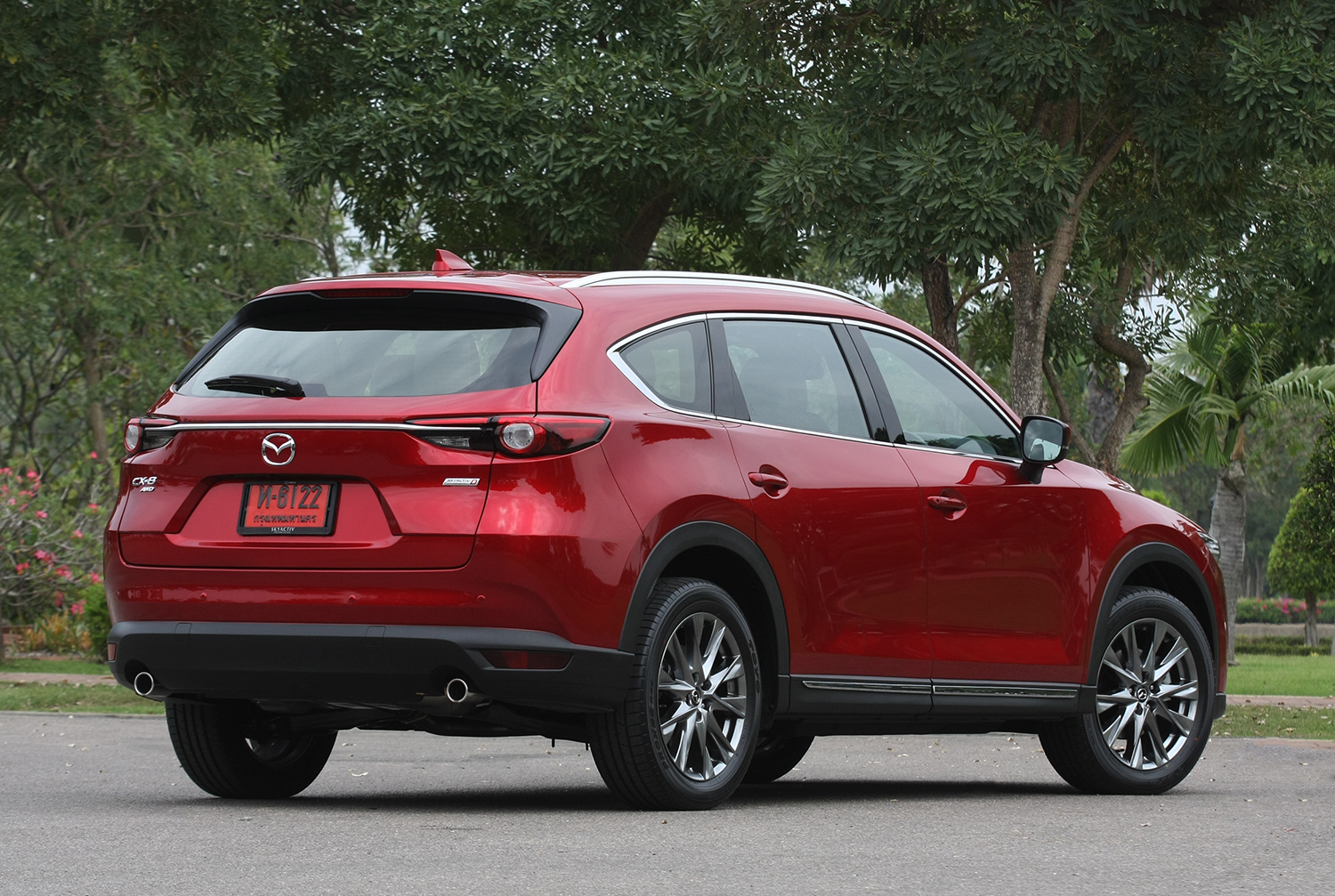 So even if the CX-8 might simply appear to be an elongated CX-5, it’s a good example to why the Fortuner and its gang are more like historic SUVs. That’s why mostly aren’t sold in America, Europe or Japan.

Should you put the CX-8 on the top of your shopping list for a three-row SUV? Certainly, because while it may not be a gem, the CX-8 manages to deliver more than 70% of what most buyers can come to expect of with the key attributes being comfort and refinement.

But you have to be quite sure that you need those three rows of seats because the diesel-powered CX-8 is considerably dearer than the CX-5 in price.

If not, make your day by spending two million baht for those cushy armchairs in XDL Exclusive form. A cut-price alternative to the Toyota Alphard/Vellfire? Not really. 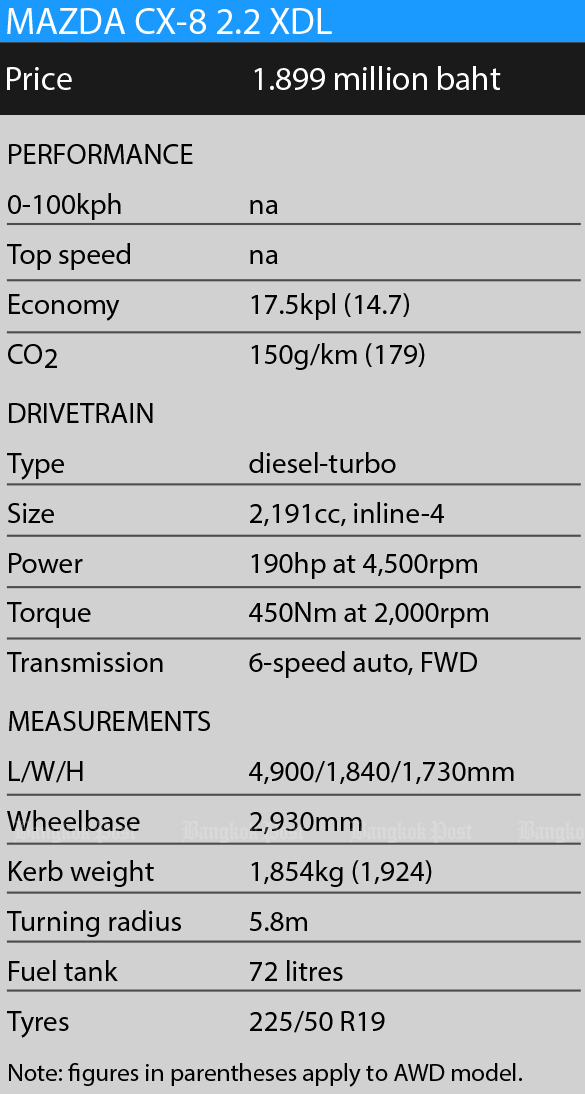 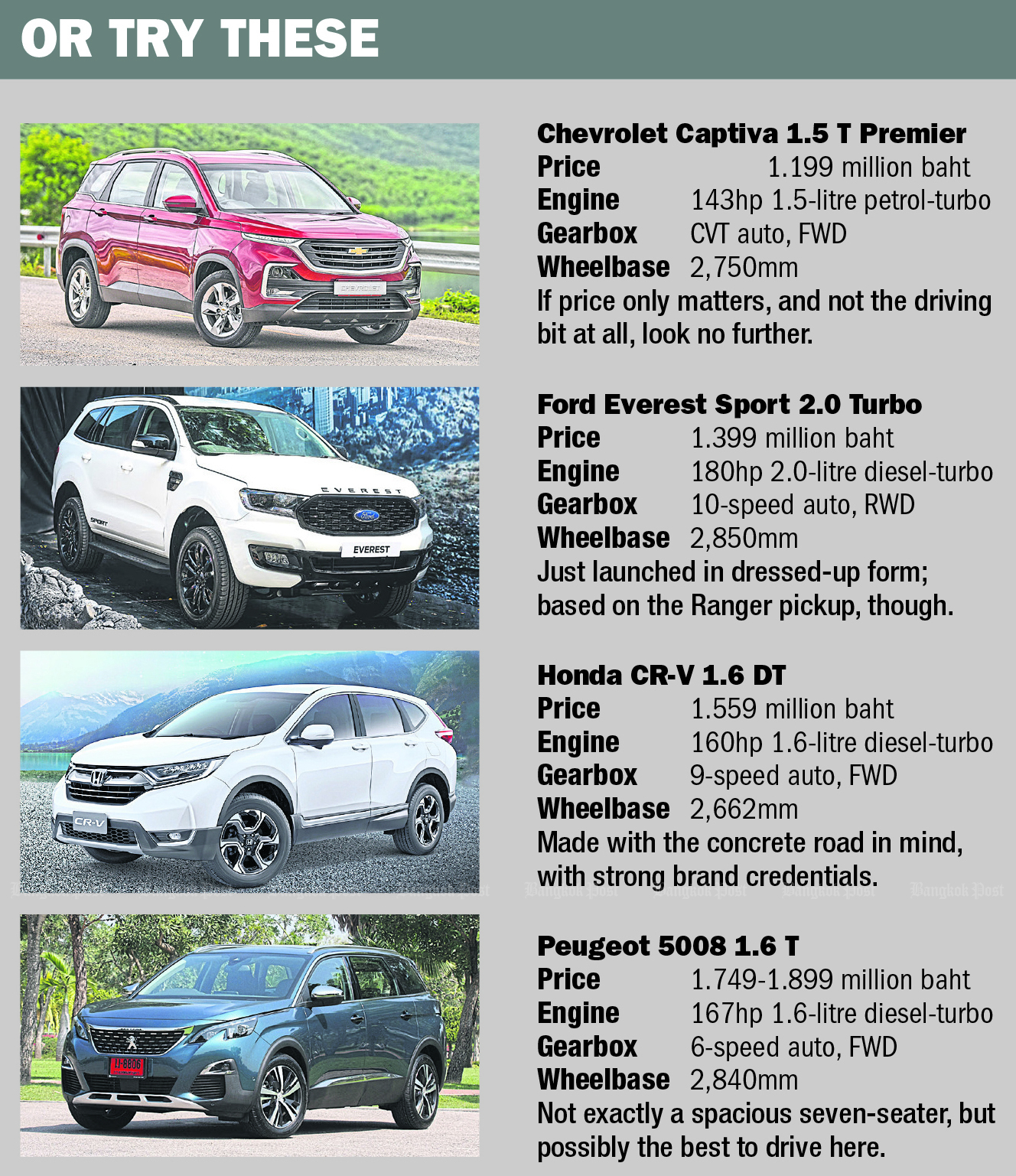