So much effort has been spent on the City’s new engine that other areas seem modestly improved. 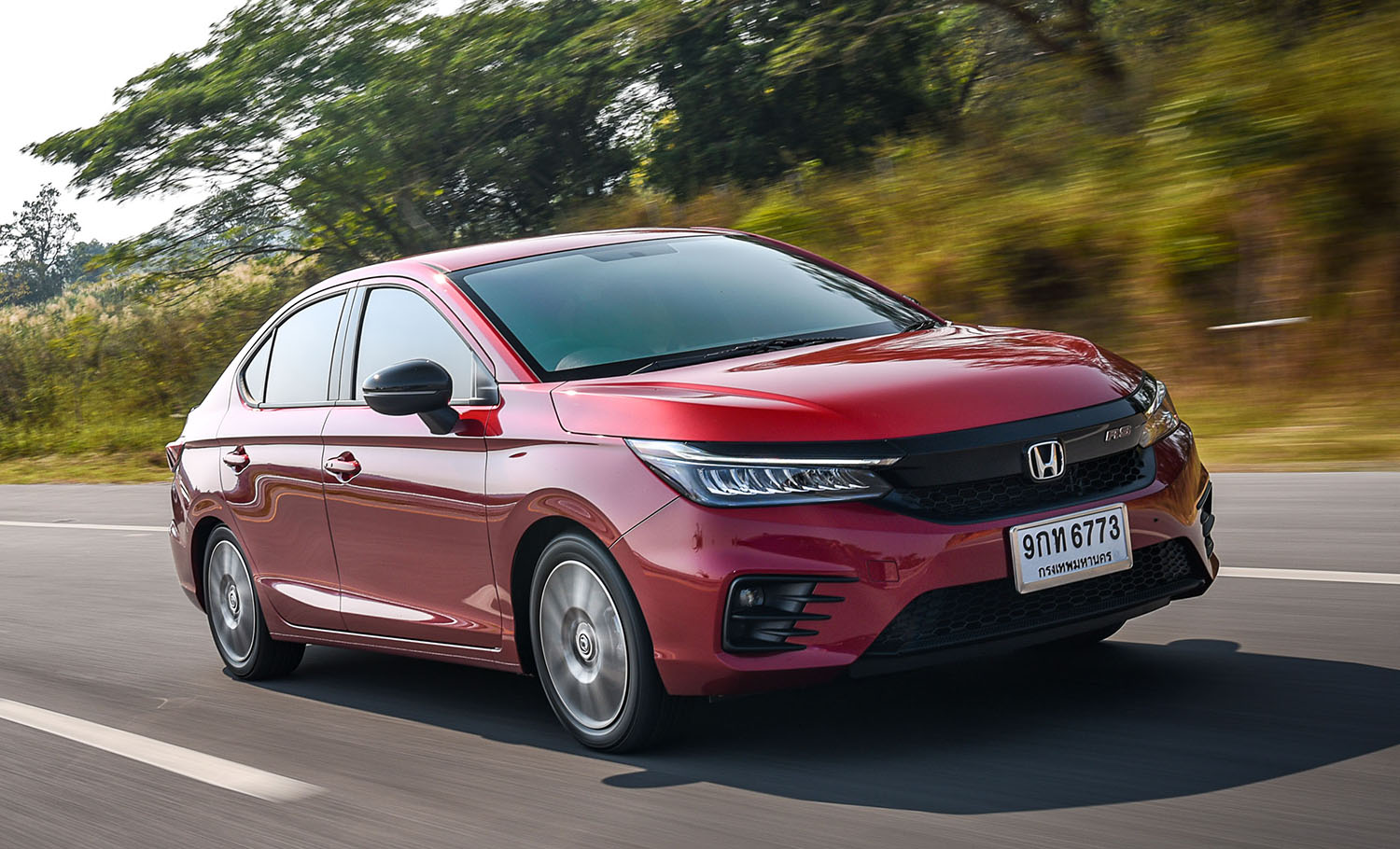 For many years already, the Honda City has been a highly popular budget car for the masses thanks to its affordable prices, spacious sedan body, competitive performance and strong brand credentials (meaning highly accessible service network and strong residuals, as such).

The only other model that has really put up a serious contest with the City is no other than the Vios from market supremo Toyota, which has now made the current Yaris Ativ its new bread-winning sedan by taking advantage of tax-friendly Ecocar rules to make prices as low as possible.

Now it’s the City’s turn to chase Ecocar II privileges, which includes a 12% rate for petrol engines under 1,300cc capable of at least 23.3kpl and no more than 100g/km of CO2; the non-Ecocar predecessor had a 1.5-litre motor facing 20%. 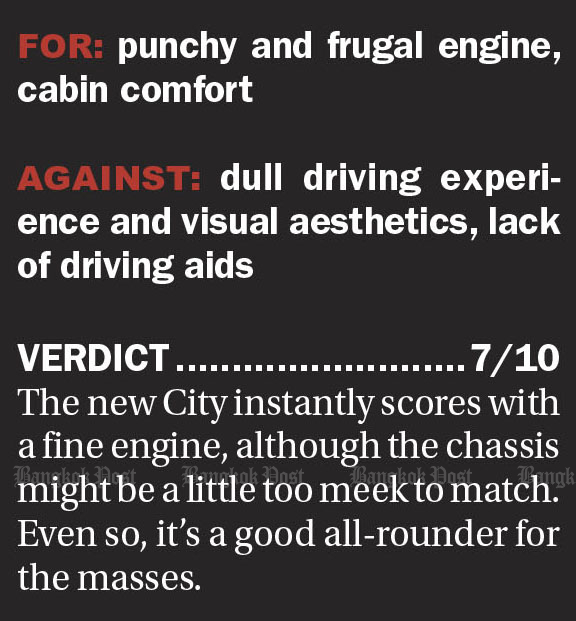 This immediately brings us to the highlight of the latest City, launched in Thailand late last year with a 1.0-litre three-cylinder petrol-turbo with records of 122hp, 23.8kpl and 99g/km.

At the moment, no other B-segment sedan in Thailand can match the City’s record on paper. This also includes the just-launched turbocharged Nissan Almera with its slightly inferior 100hp, 23.3kpl and 100g/km tallies. 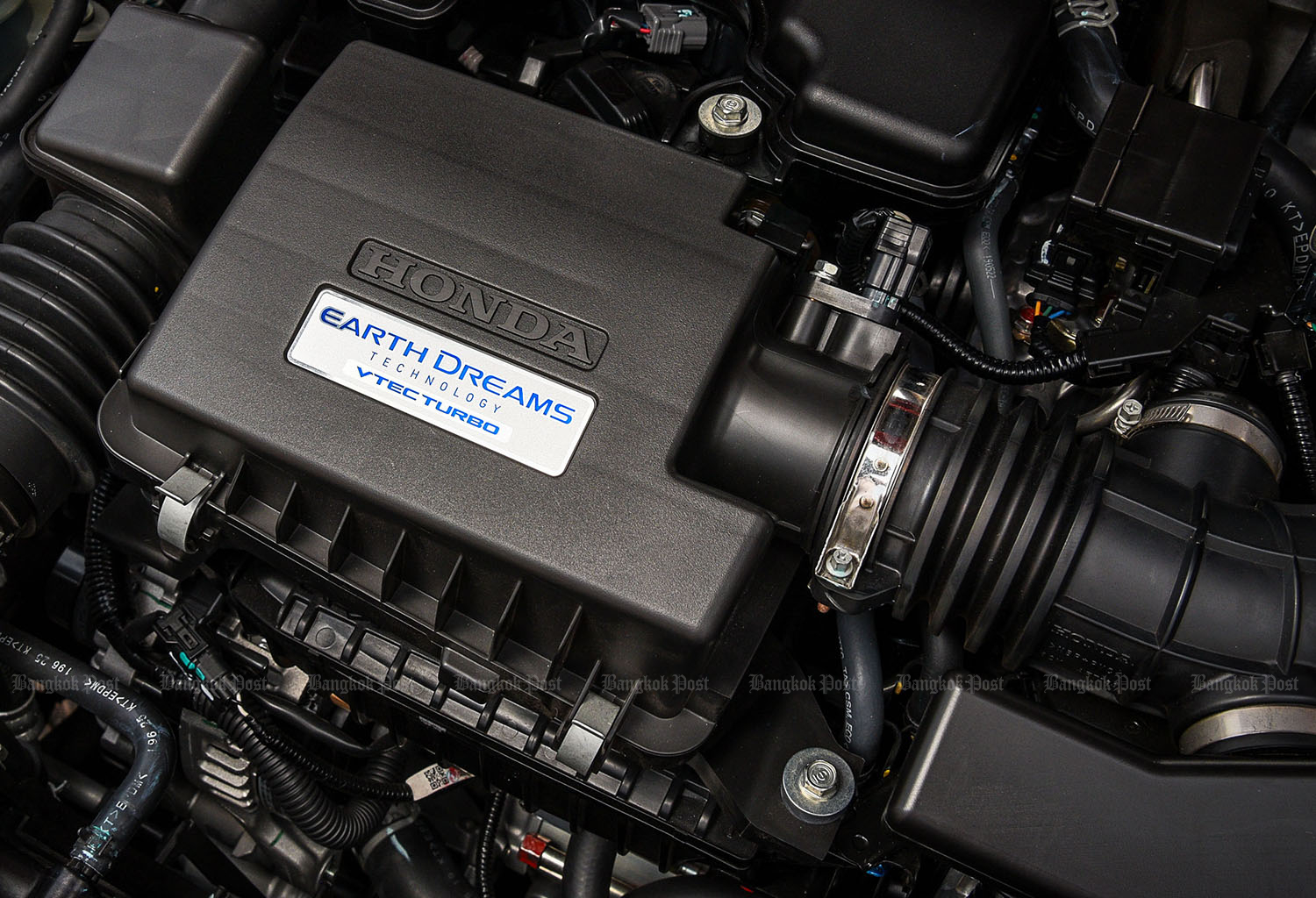 Do the City’s stats speak volume outside the showroom? In one word, yes. Which isn’t that surprising because Honda has usually been a frontrunner when it comes to offering good in-class performance, although it was only recently that some focus had also been put on fuel economy.

The so-called 1.0-litre VTEC Turbo goes almost, if not as brilliantly, as the similarly sized and configured Ecoboost unit found in the Ford Fiesta, which has sadly been removed from Thai showrooms already (it wasn’t billed as an Ecocar at that time, hence the near-800,000 baht price).

A slight tap on the throttle is enough to get the City moving around in an effortless and safe manner anywhere around the city driving and during overtaking on country roads elsewhere.

There’s a newfound level of engine refinement in the City with a well-muted three-pot tune, unlike in Honda’s last-gen turbo-free motor being so noisy near the engine’s redline.

That improvement is mostly due to the presence of a turbo, something that costs money when it comes to R&D and isn’t present yet in the Yaris Ativ, Mazda 2 and Mitsubishi Attrage.

Strangely, these three rivals all are said to suit Ecocar II rules meaning that they can be as frugal on fuel as the City but nowhere as close in terms of tractable performance.

And don’t get annoyed by the fact a CVT automatic remains in the City. Because the turbo kicks in at relatively low engine revolutions, you don’t need any kind of kickdown like in conventional torque-converter autos to get the car surging forward. Just tap on the gas and the City goes smoothly on its power delivery, although responsiveness is not as sharp as in a naturally aspirated unit.

Even so, it’s quite clear from this point that the City’s engine is the one to beat at the moment. The Almera, which we’ll get behind the wheel of one soon, will really need to prove a thing or two.

In terms of the driving characteristics, the City is more on par rather than on top of the class. Which isn’t surprising because Honda takes great importance in making their cars as relevant as possible especially when it comes to models like the City catering to customers ranging from youngsters to pensioners.

So rather than having a fun and great handling chassis, the City remains more of an easy car to drive. That also includes a comfort-oriented suspension, unlike in the slightly firmer Mazda 2 and that now-defunct Fiesta.

In other words, the City steers intuitively and rides compliantly around town, while feeling a little light and less solid on the highway.

The City’s steering weight feels nice on straight bits but not that sharp in the twisties, where the car’s tyres also tend to howl too early when driven with just a little more pace than usual. 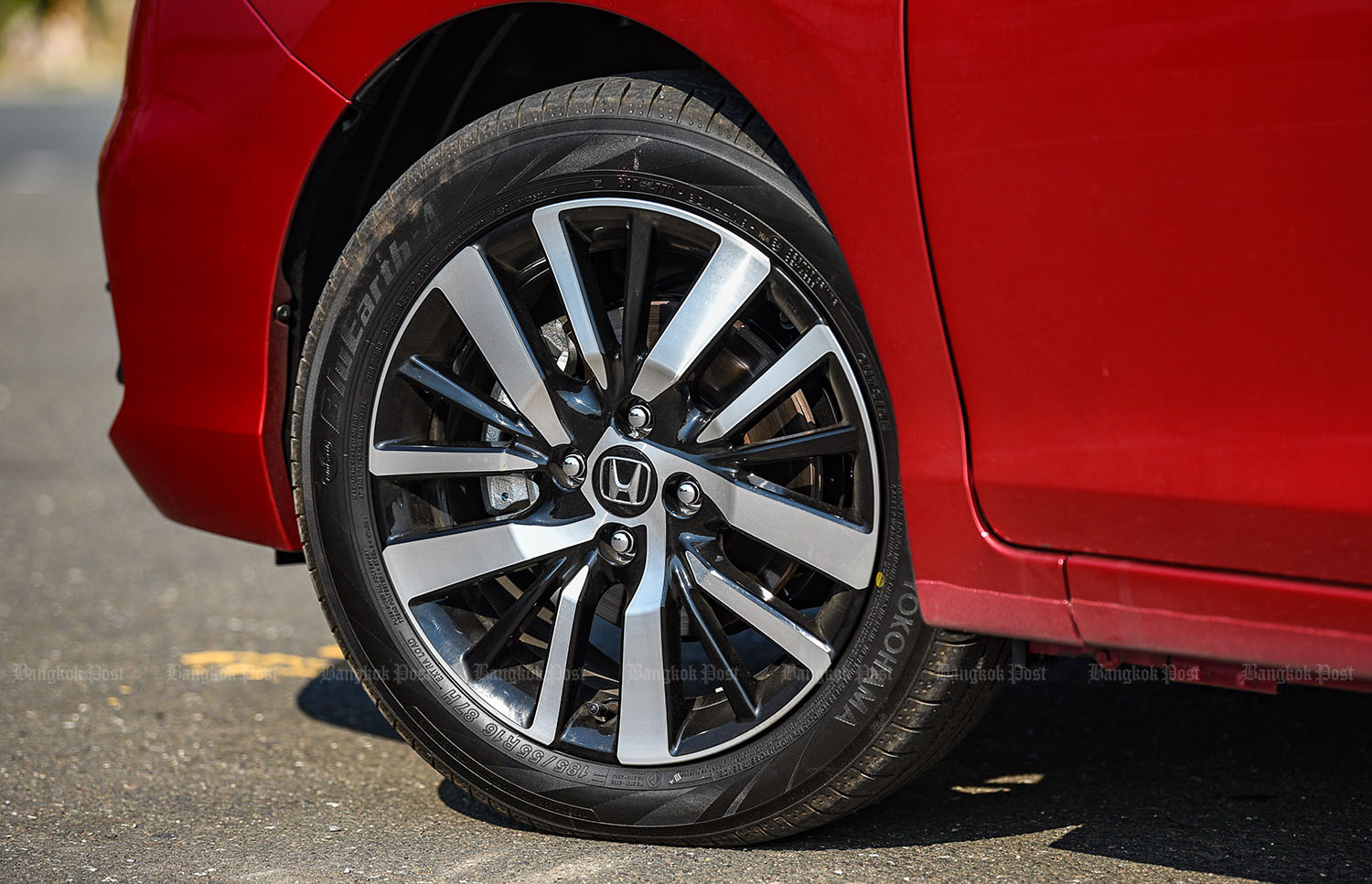 The City could have also had better external noise suppression which could have been due to Honda’s desire to contain costs in offsetting those new powertrain technologies.

Rear passengers, in particular, will hear a considerable amount of wind noise at high speeds. As well, the rear drum brakes which can prove a little weak when decelerating hard from high speeds.

Aside the driving bit, Honda has practically hit the right buttons when it comes to meeting requirements of today’s buyers of cars. The cabin features enough stow areas to put petty things in, USB sockets and an effective infotainment system. 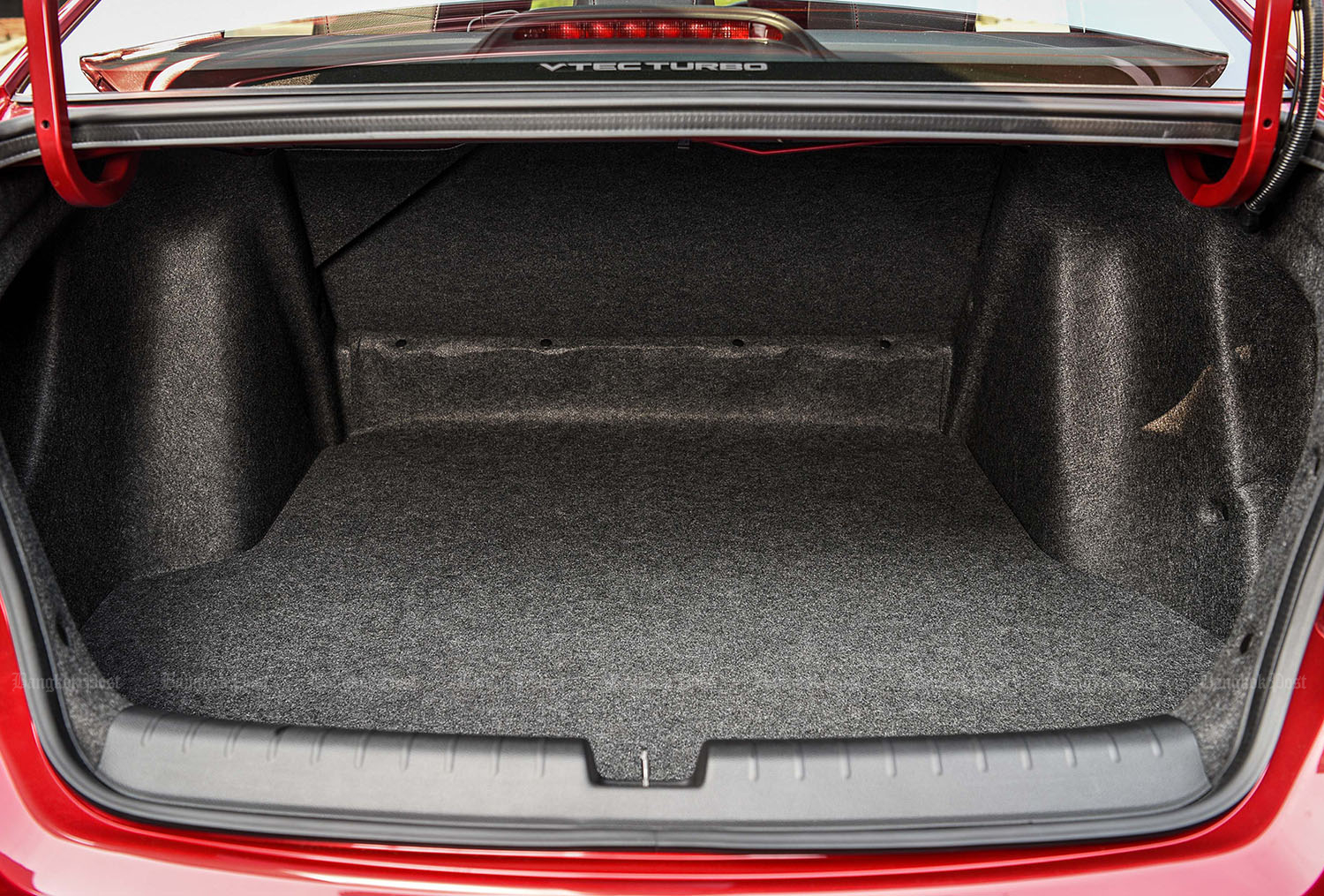 But while the City’s interior scores in function well, it lacks the aesthetics of, say, the Mazda 2. Contemporary things still lacking in the City include a digital instrument panel and more soft-touch materials, even if there are some on the door panels.

Also, six airbags are not standard across the range and driver-assist tech is minimal, even in the RS trim.

Packaging-wise, the City is spot on by being spacious and offering better seat comfort than ever. The amount of rear legroom in the City feels naturally sufficient with additional thanks going to the slimmer front seats. 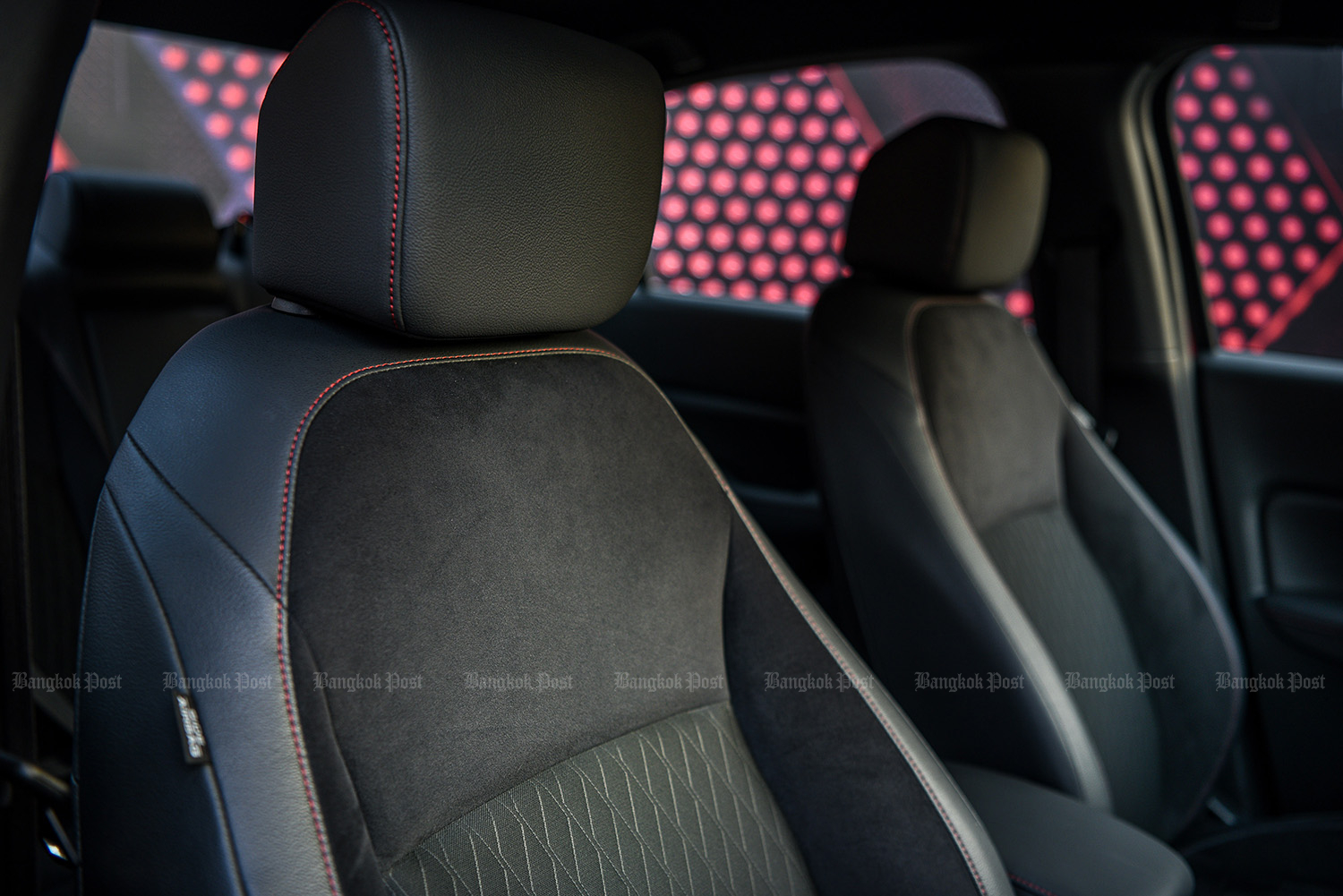 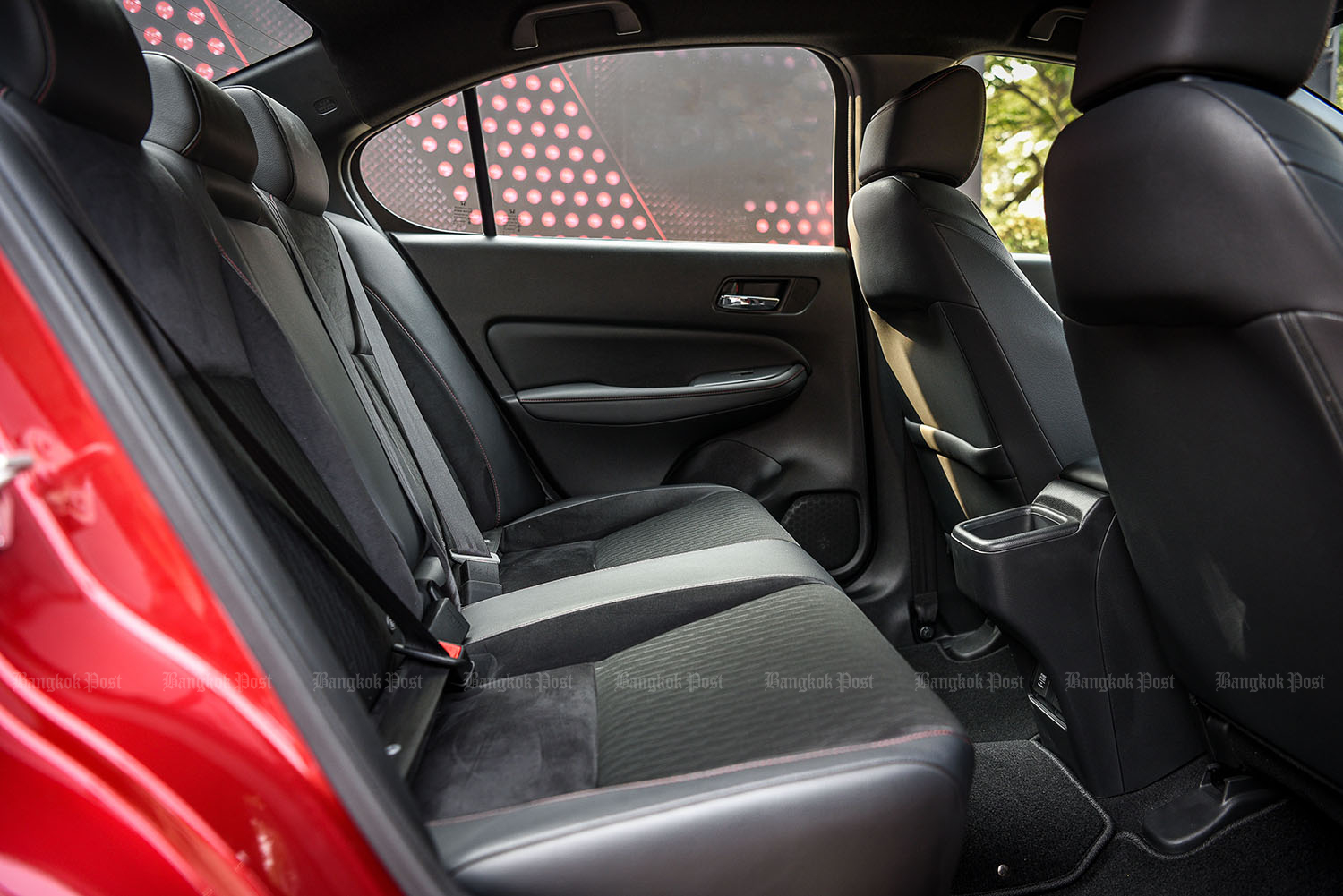 Like the interior which has been penned with caution, the exterior looks too predictable and very evolutionary when compared to the previous model.

It’s a totally different evolution the current Civic and Accord have taken or, in another way, the City’s designers were strictly cautioned of the predecessor’s success in its major markets (like India and Thailand). In the end, there’s still much to like about the City, though. While it may not be class act when it comes to the entire driving experience, many buyers will like its sumptuous levels of performance, fuel economy and easy point-to-point driving.

You might even wish for a better kit, but at least the City hasn’t erred away from competitive pricing which is important in the Thai B-segment. In many ways, the City is a good value sedan for the masses, what it has always been in the past years. 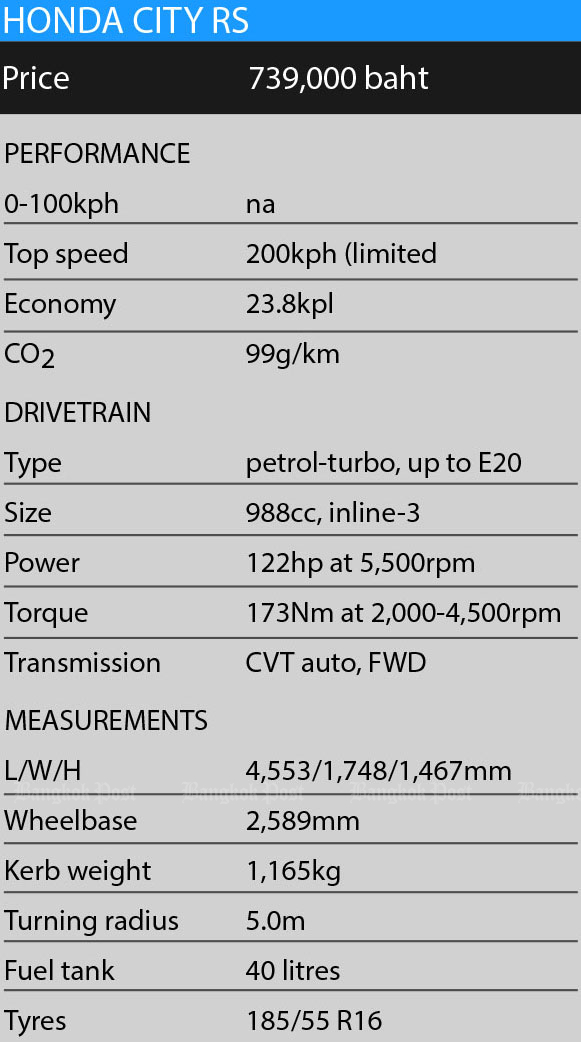 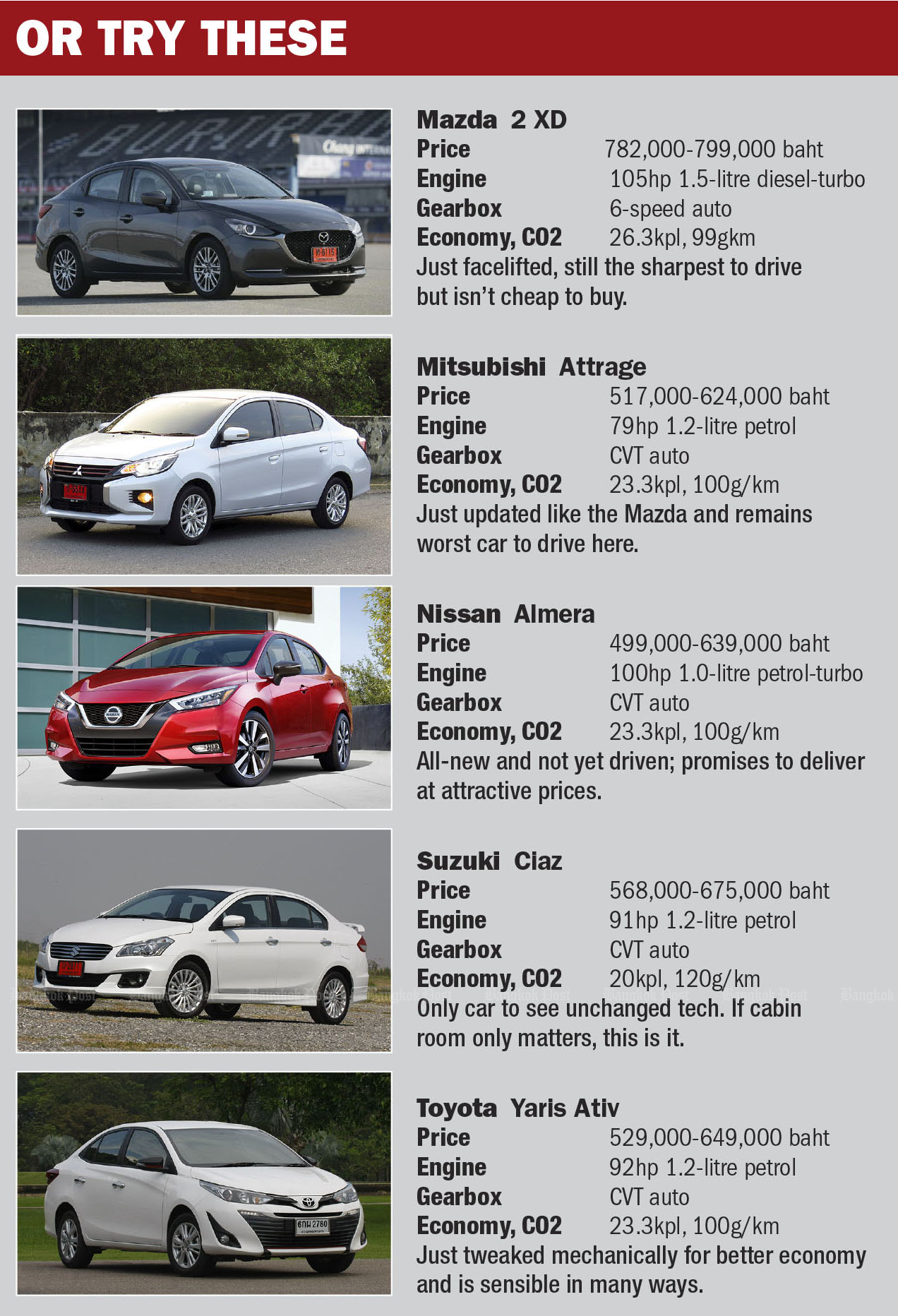