Range Rover’s entry-level SUV is still desirable as ever – if only you could wait a little longer. It comes as no surprise why the Evoque has become the best-selling Range Rover on a global basis.

Apart from being the most price-affordable model of Land Rover’s premium 4x4 marque, the Evoque simply had the looks to die for.

Because of its success, designers found it a big challenge in developing the second generation model which was why it was probably best to adhere to the usual formula of “if it ain’t broke, don’t fix it”. 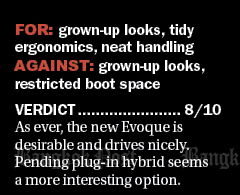 Take a look at the all-new Evoque, tested here on Thai roads after being officially launched late last year. You could hardly tell the difference between old and new. Blimey, you could’ve even mistaken it for a minor-changed model.

The Evoque’s sporty roofline remains in place so that it can attract the usual attention from SUV punters who might prefer sassy-looking alternatives like the BMW X4 or Mercedes-Benz GLC Coupe. To keep things as sleek as possible, the new Evoque has ultra-slim lights front and rear. 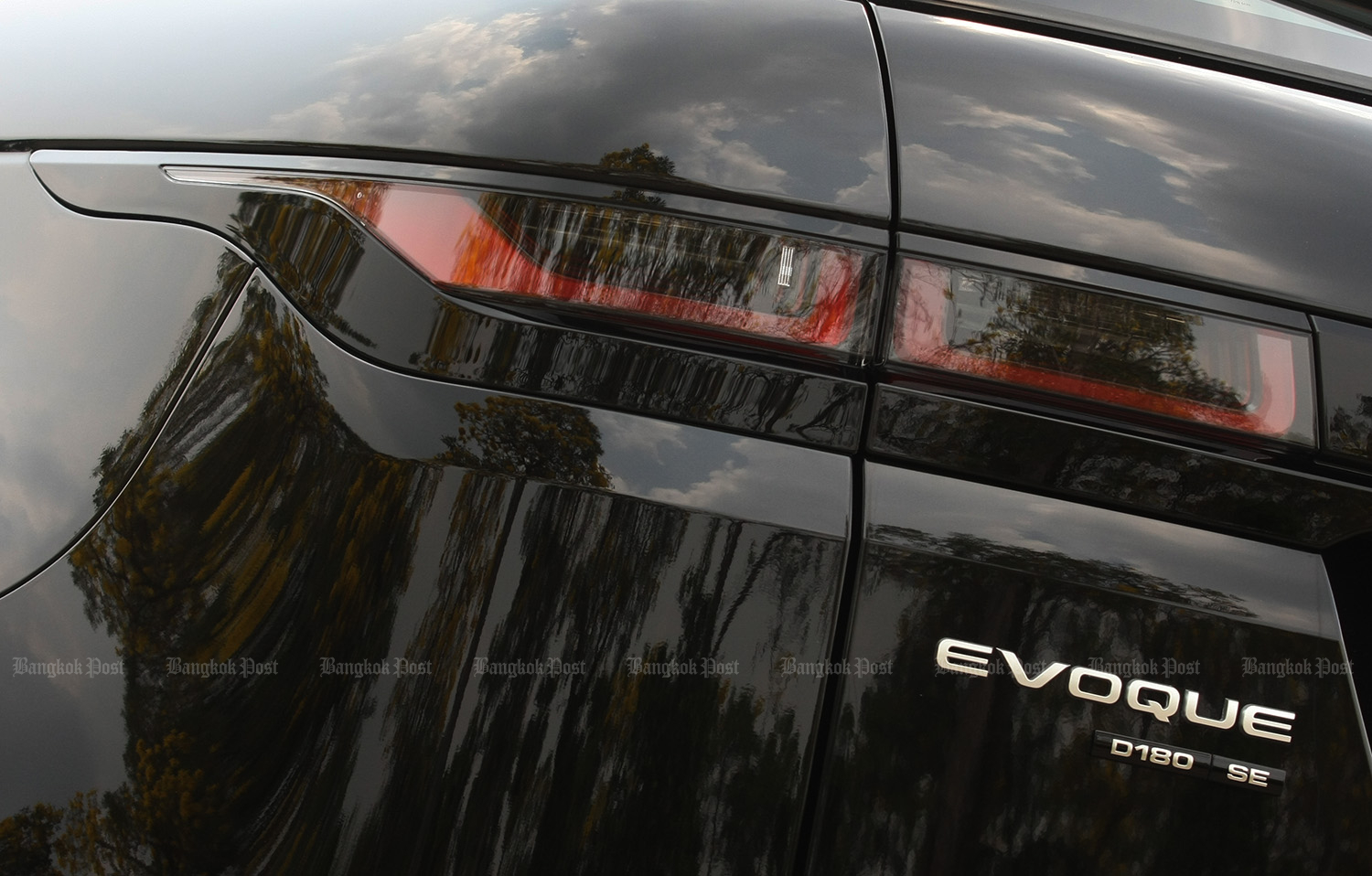 The interior has also evolved cautiously and comes close in appearance with the Velar, Range Rover’s next smallest SUV. There are steering-mounted touch pads and three digital screens inside that, however, truly help lift the Evoque’s modernity and appeal among contemporary SUV buyers.

But some playfulness has been lost in the process. The rotary-style gearbox knob, for one, that once neatly popped out from the console is now replaced with a conventional lever. The steering wheel, too, feels more ordinary now.

Of course, the gear operation isn’t harder to use, but you somehow miss that unique feature that’s slowing disappearing from not only Range Rovers but Jaguars, as well. At least, the pop-out door handles on the exterior of the Evoque remain. 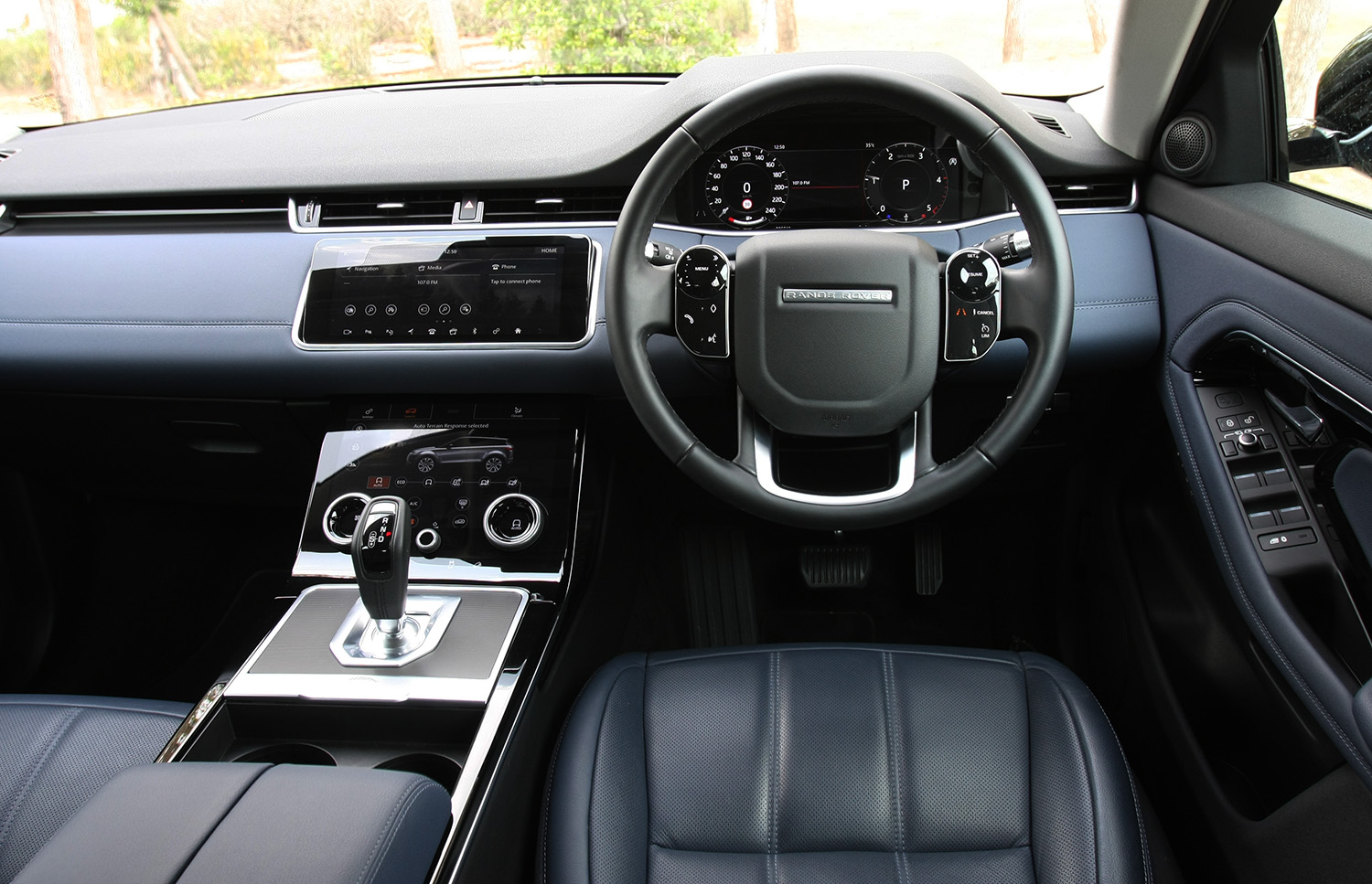 When it comes to perceived quality, the Evoque seemingly has taken a step forward. It feels genuinely upmarket inside with plenty of nice materials here and there. There are three trims available in Thailand with the range-topping version featuring a large sunroof.

Despite the high window line that could make the Evoque’s cabin initially feel claustrophobic, it isn’t once you hop into the rear quarters. Of course, it won’t feel as airy as in a utility-oriented X3, but headroom in the Evoque is hardly an issue and perhaps a touch better than in that X4. 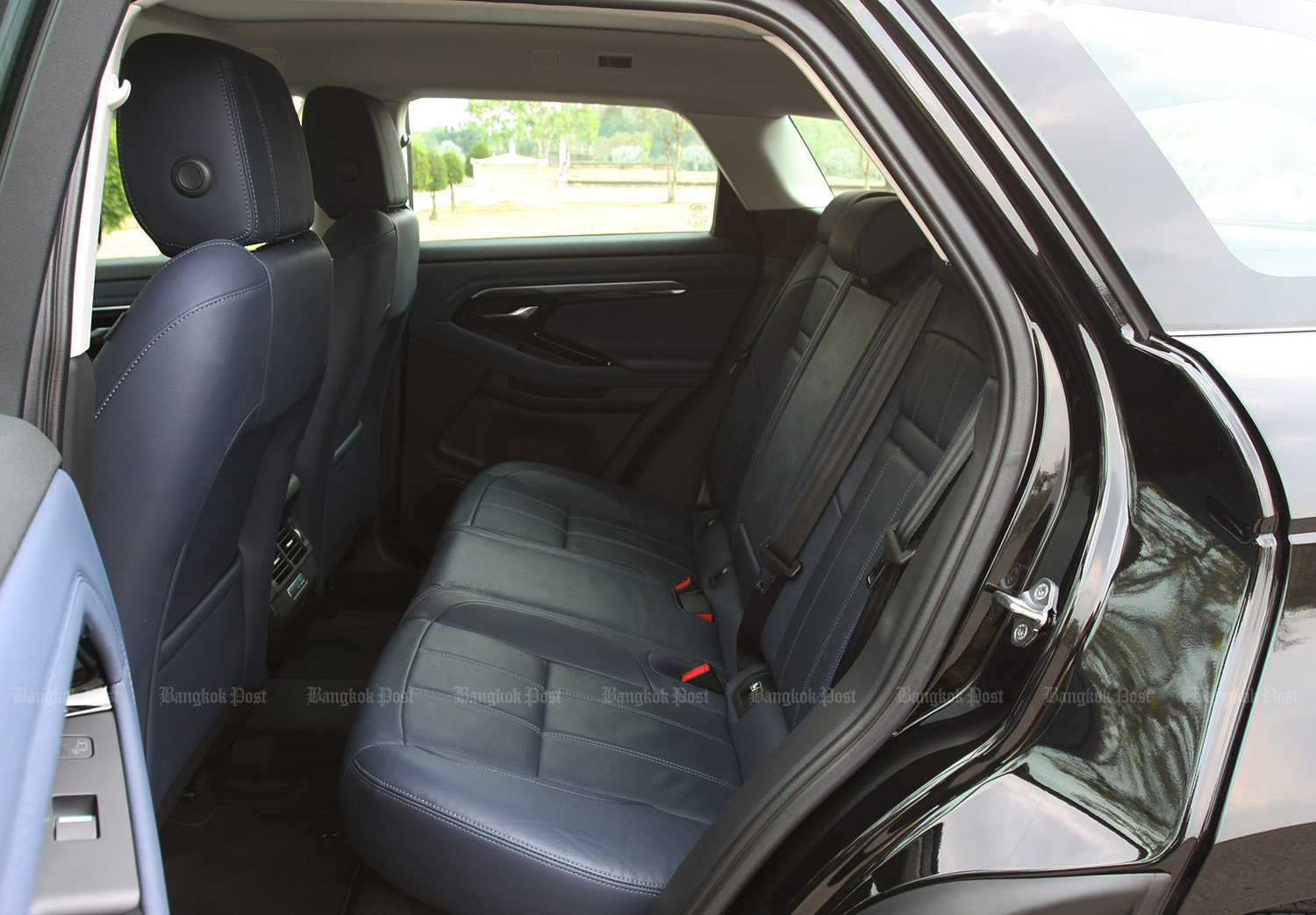 Eagle-eyed enthusiasts will note that the Evoque’s rear end is less raked than before thus contributing to better boot space. That might be the case, but it’s still more about style than outright practicality. The rear backrests, too, can’t fold down flat when more space is required. 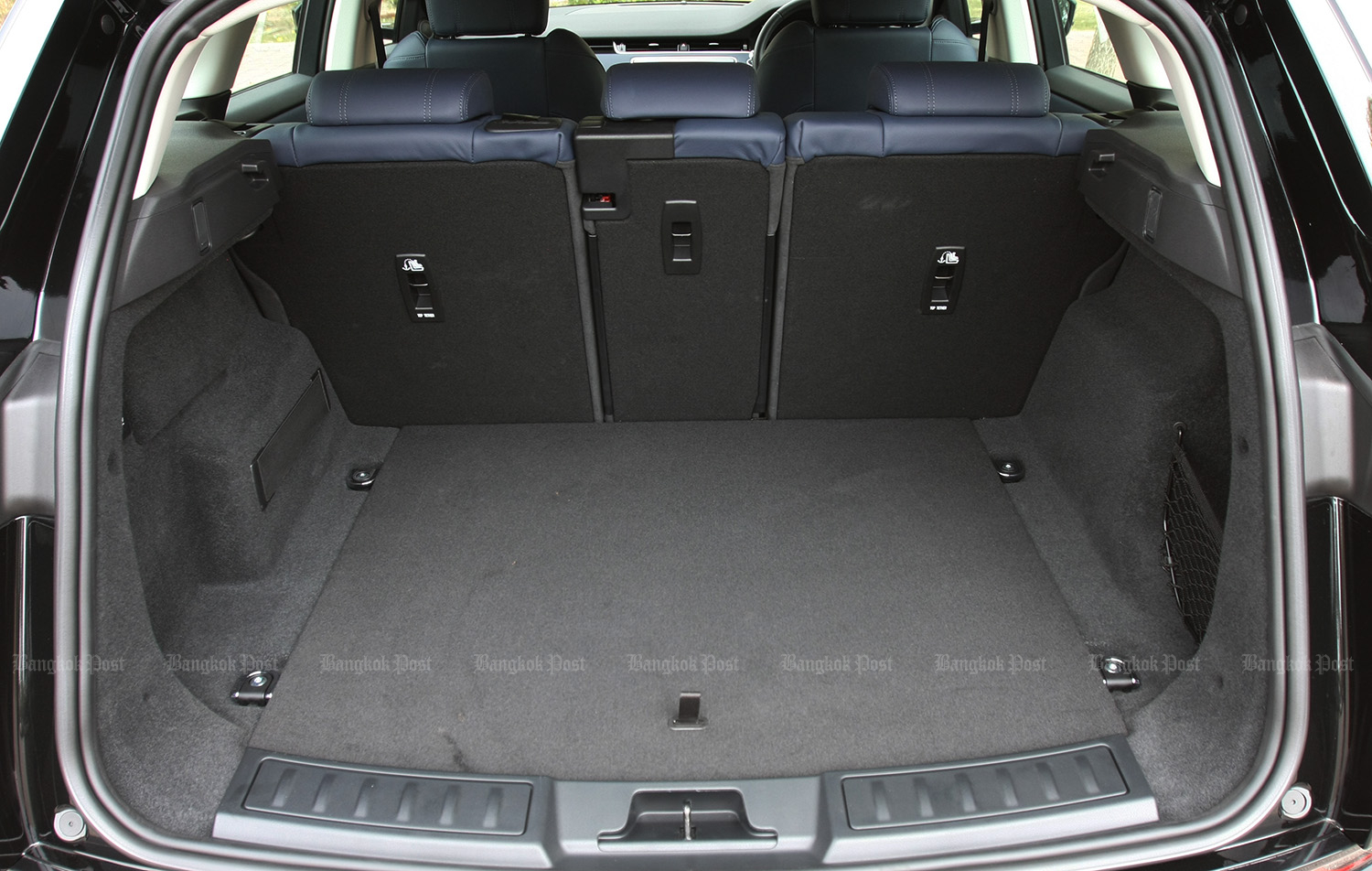 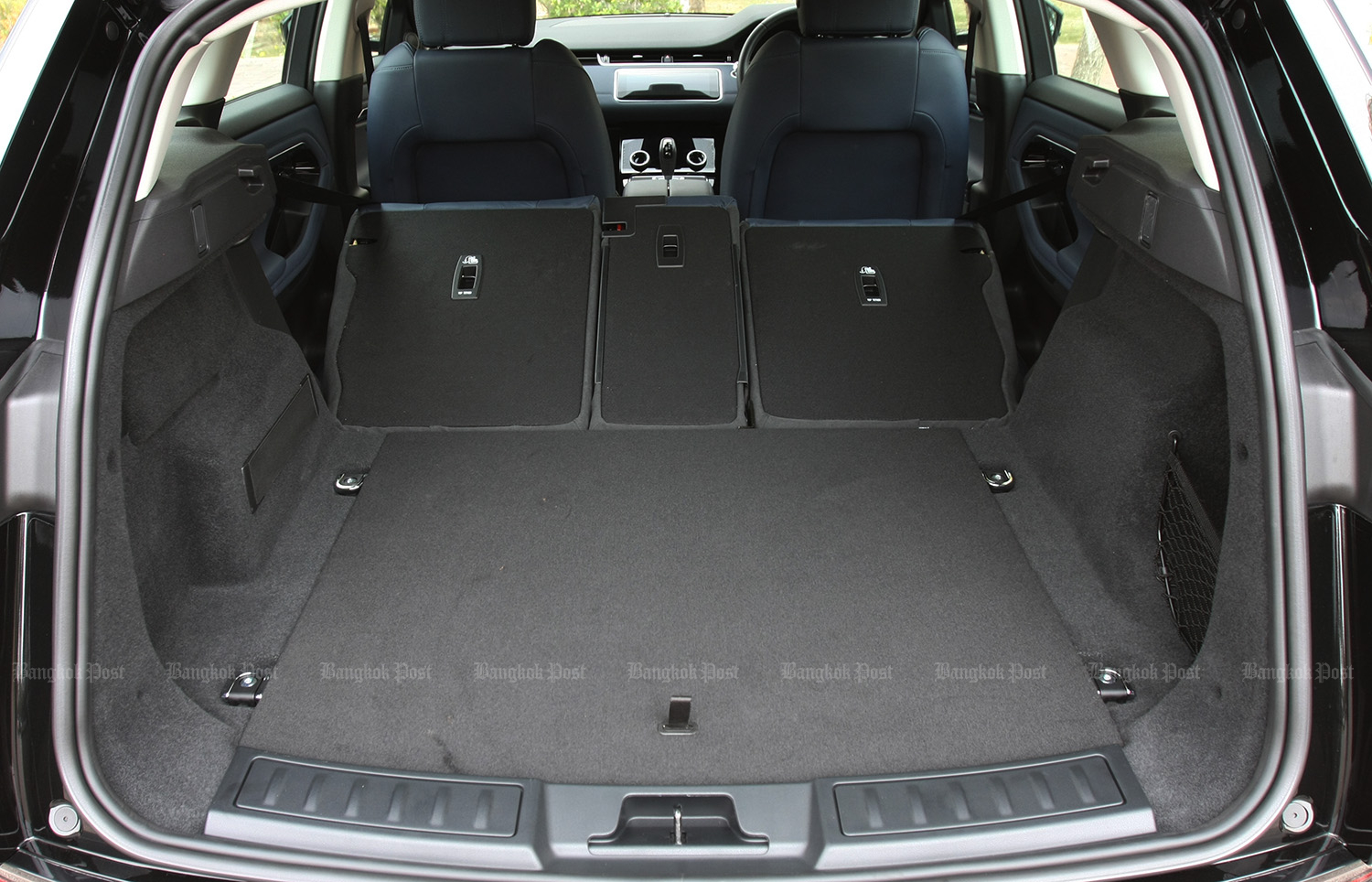 To suit its slightly sporty concept, the Evoque was one of the best SUVs to drive in its class making it nearly as good as the Porsche Macan. And while we have no qualms about it handling just as fine as before, the Evoque feels more mature now than fun.

This is probably a step in the right direction due to the need in appealing to the widest range of customers as possible. The damping rates of the suspension seem perfectly judged, although some vibrations do spoil the secondary ride. It almost appears that the previous generation somehow had better bump absorption qualities. 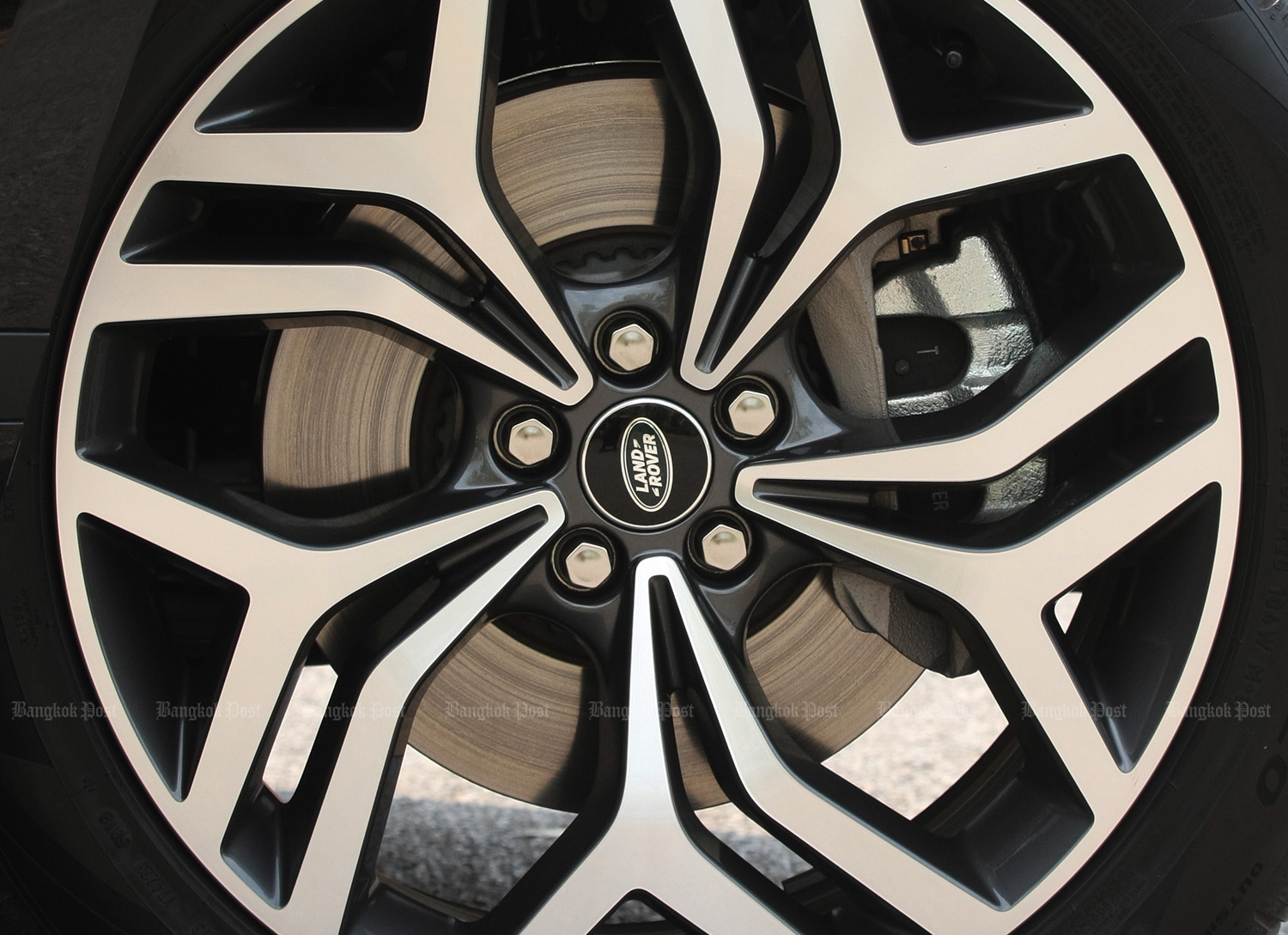 Even so, the handling and ride balance is good for an SUV, similarly to how the X4 and GLC Coupe are distinguished from the X3 and regular GLC. Once again, the Evoque drives nicely overall, if not best in-class.

Like before, the Evoque comes with a 2.0-litre diesel-turbo mated to nine-speed automatic driving all four wheels. Just like what you can expect from a modern-day diesel, the Evoque performs without fuss. There’s plenty of low-rev shove and ample of it when you want to take over others at higher speeds. 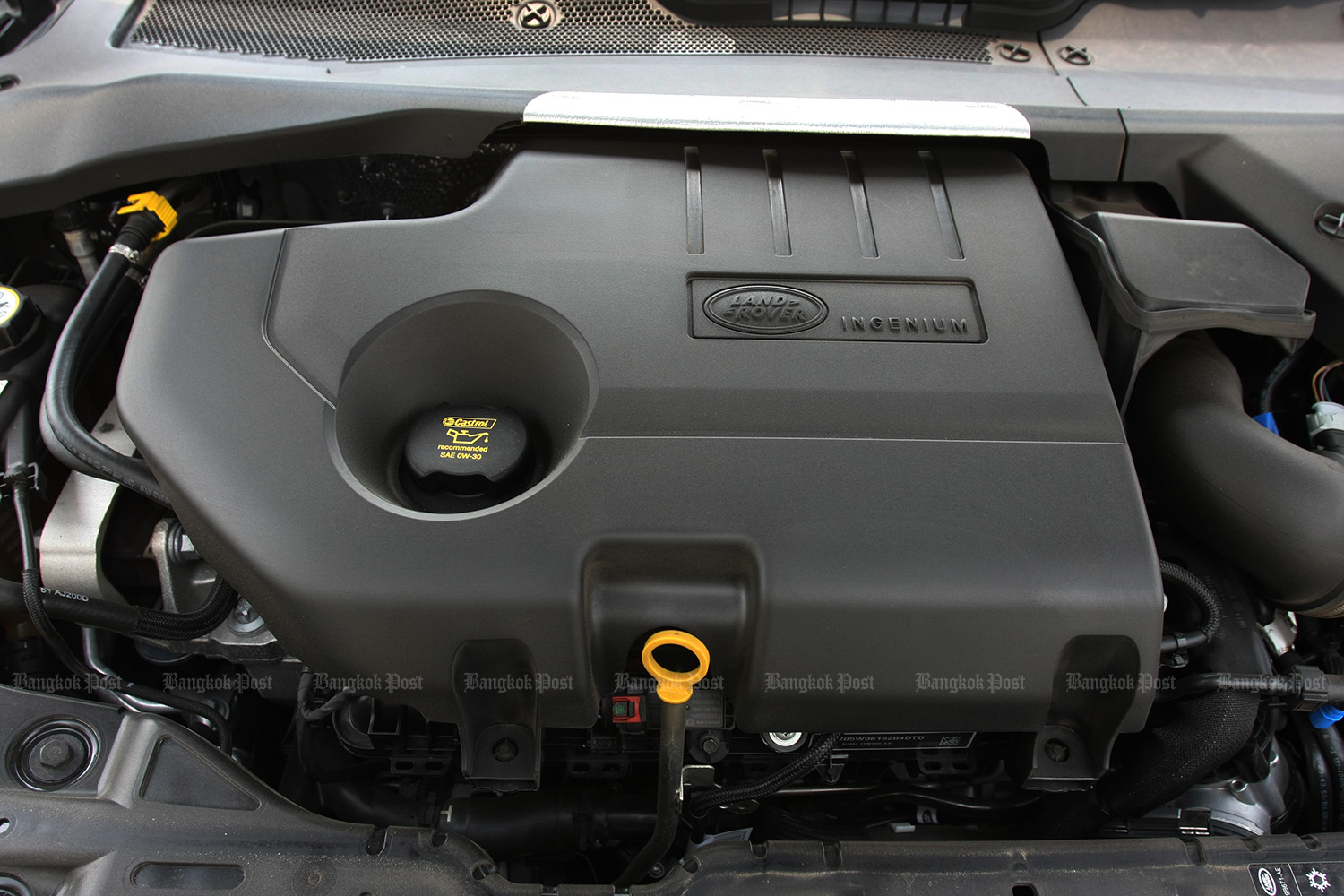 For the first time, the Evoque is getting a 1.5-litre three-cylinder petrol-turbo with plug-in hybrid. Although it’s coming later this year, it sounds quite a compelling choice even though we have yet to sample it. Here are some good reasons why.

The Thai Land Rover importer says the plug-in Evoque will have prices starting out at less than four million baht thanks to some tax perks. Next, all-electric ability greatly suits the Evoque’s appeal among urbanites. Lastly, the diesel motor in our test car isn’t the best in refinement.

With such a drivetrain, the Evoque should easily put up a nice fight with the GLC Coupe, which has just gone plug-in hybrid in Thailand recently. No, the Evoque is still generally fine with a diesel, but Range Rovers are now more about the concrete jungle despite their fabled off-roading prowess. 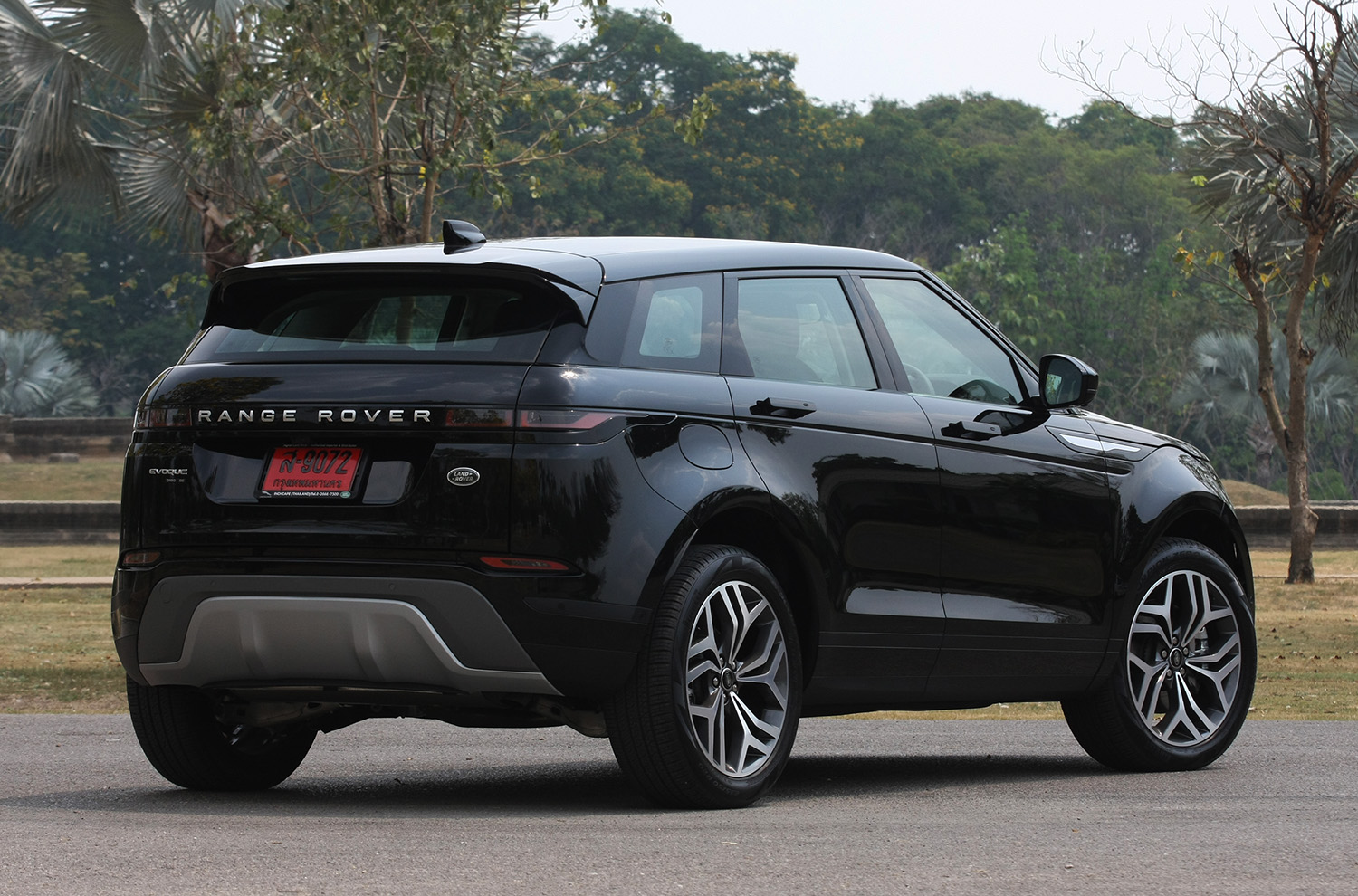 Fans of the Evoque may still find its proposition at some four million baht worthwhile because it’s still, after all, the most price-affordable Range Rover. Call it Velar Jr if you wish.

Wait a little more for electrification, though, and it appears the Evoque has found its proper match for the new decade. 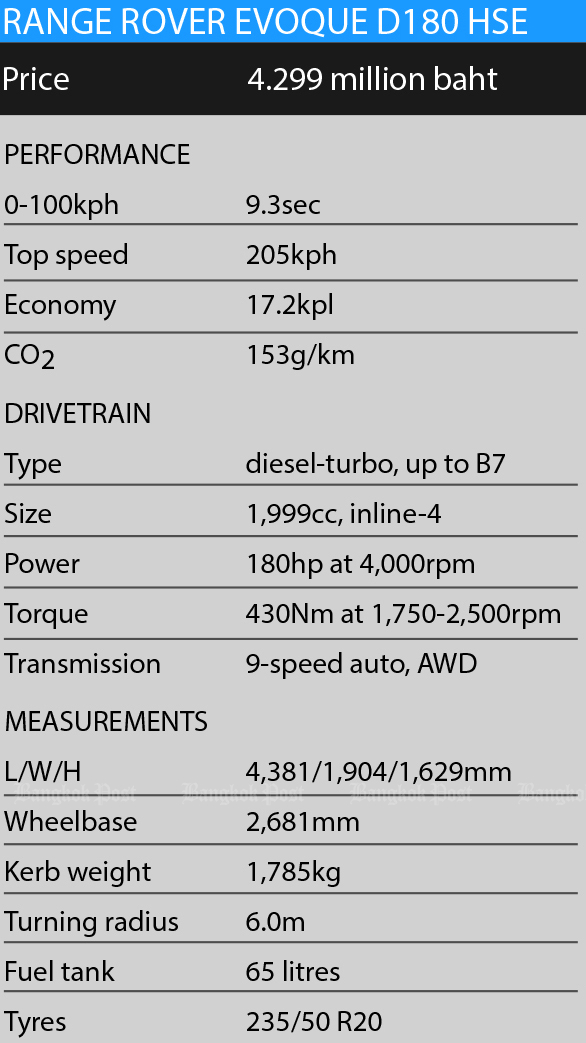 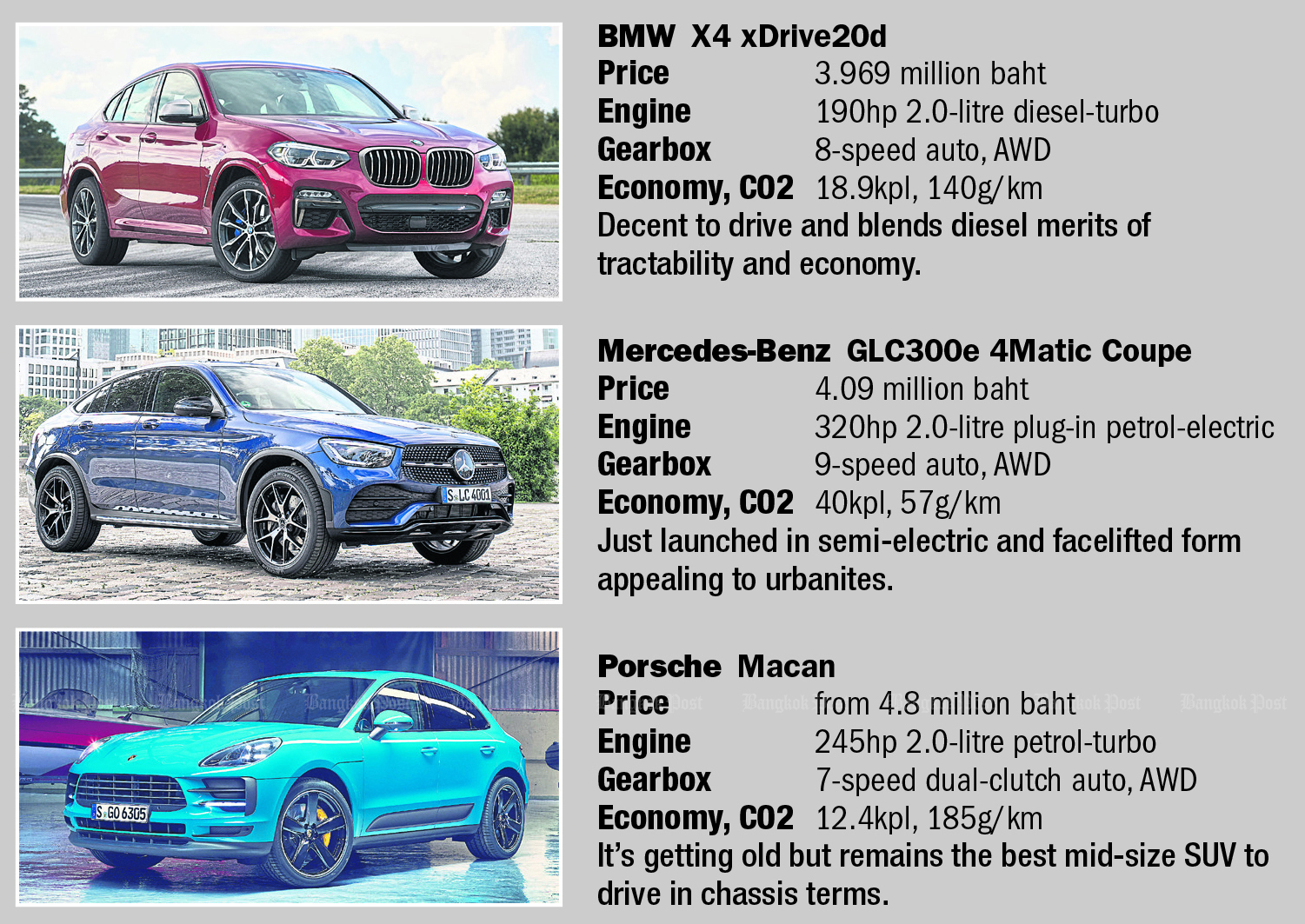