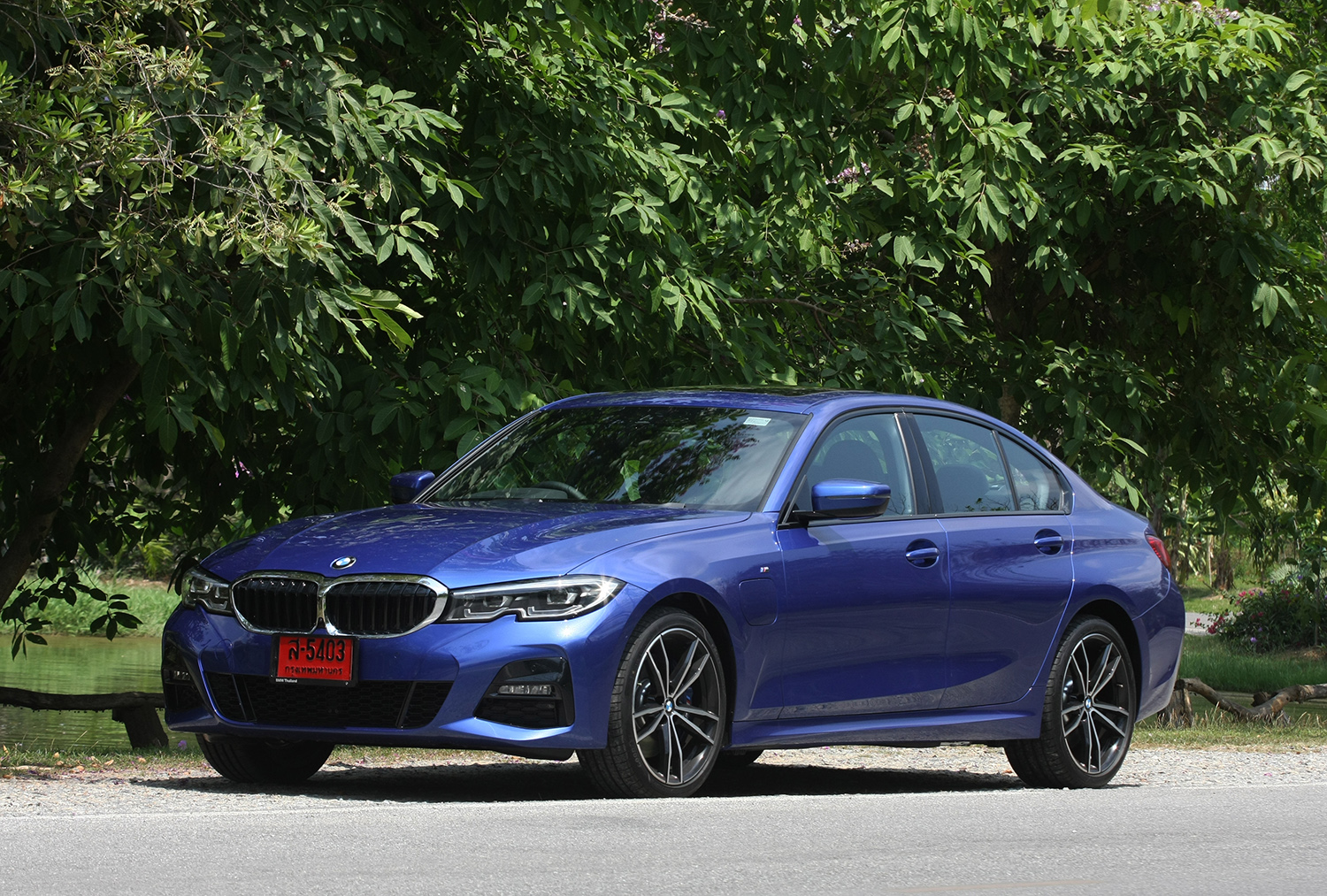 When the current generation of the 3 Series was launched in Thailand last year, BMW chose to sell two models: 320d diesel and 330i petrol.

Now, there’s a new plug-in hybrid version called 330e which supersedes the imported 330i in marketing terms and accompanies the 320d in the just-announced lineup of the locally assembled 3 Series.

Like in the previous-gen predecessor, the 330e combines a 2.0-litre petrol-turbo engine, eight-speed torque-converter automatic and electrical system with plug-in facility to effectively be a semi-electric 3 Series with 292hp of combined power.

The major improvement in the new 330e comes in the form of a better 12kWh lithium-ion battery to help increase all-electric driving range to around 60km.

Despite some small discrepancies (see accompanying graphic), the on-paper stats of the 330e are very similar to those of the Mercedes-Benz C300e. Can the smallest of numerical disadvantages make up for the 330e’s price edge of some 200k? 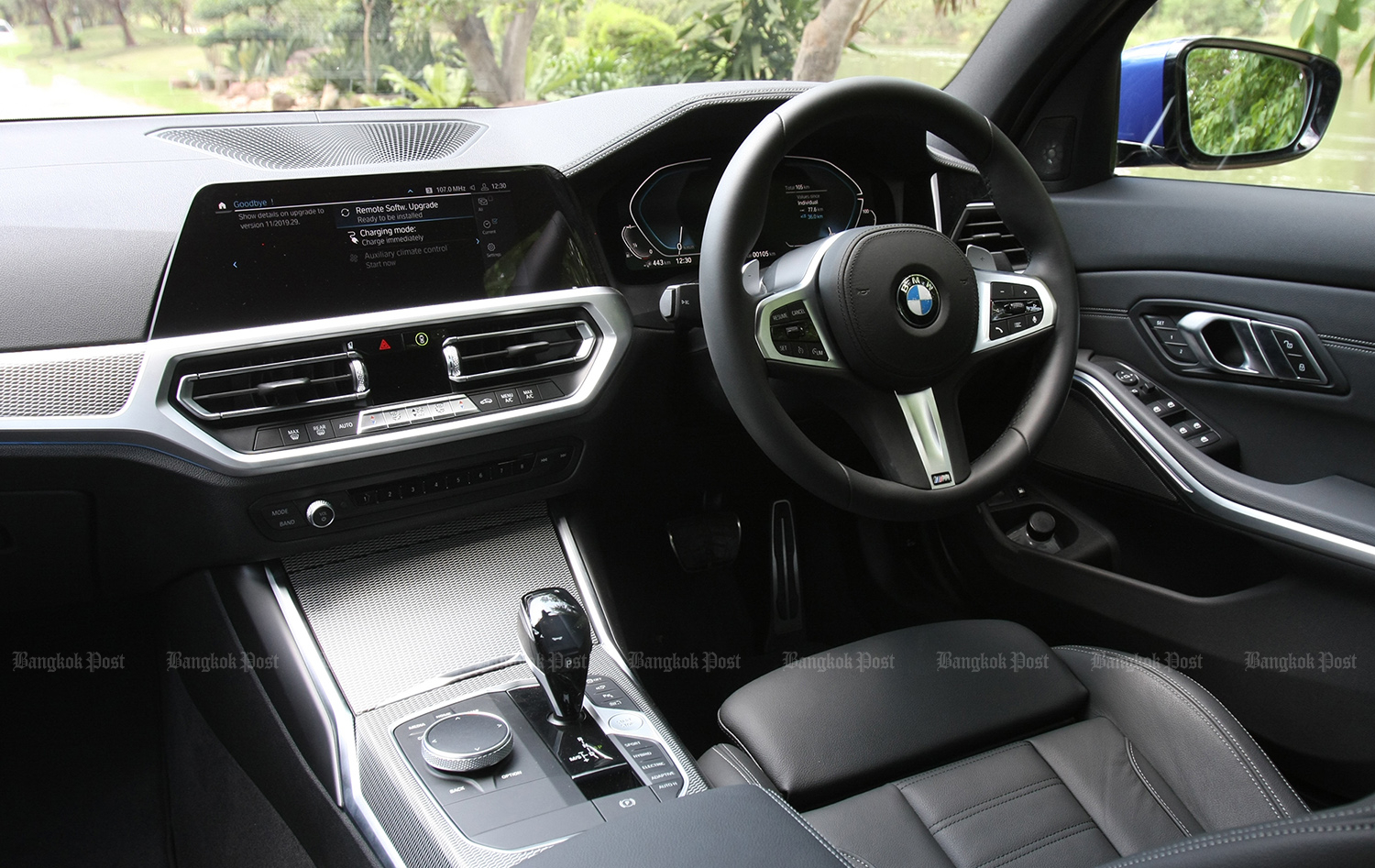 The most immediate advantage plug-in hybrid vehicles enjoy over self-charging hybrids is the ability to drive on pure electricity for longer distances.

During the early days of the 330e and its likes, the range is usually claimed at some 30km. But thanks to improvements in battery tech, it has now nearly doubled. So there you go: the first cool thing in the newest 330e is all-electric range.

Apart from providing more opportunities to run CO2-less around town (at no more than 140kph, in fact), the 330e’s electrical system also allows for short bursts of overtaking power.

Which is to say that the 330e is rarely lacking in power at any time. Actually, you just have to leave the drive system in Hybrid mode to enjoy the sumptuous level of performance; Sport mode seems mostly unnecessary.

BMW’s decision to place the battery beneath the rear seats and smaller 40-litre fuel tank above the rear axle seems to have some merits in the car’s driving dynamics in which you rarely feel any weight issues – something you’d occasionally feel in the C300e. 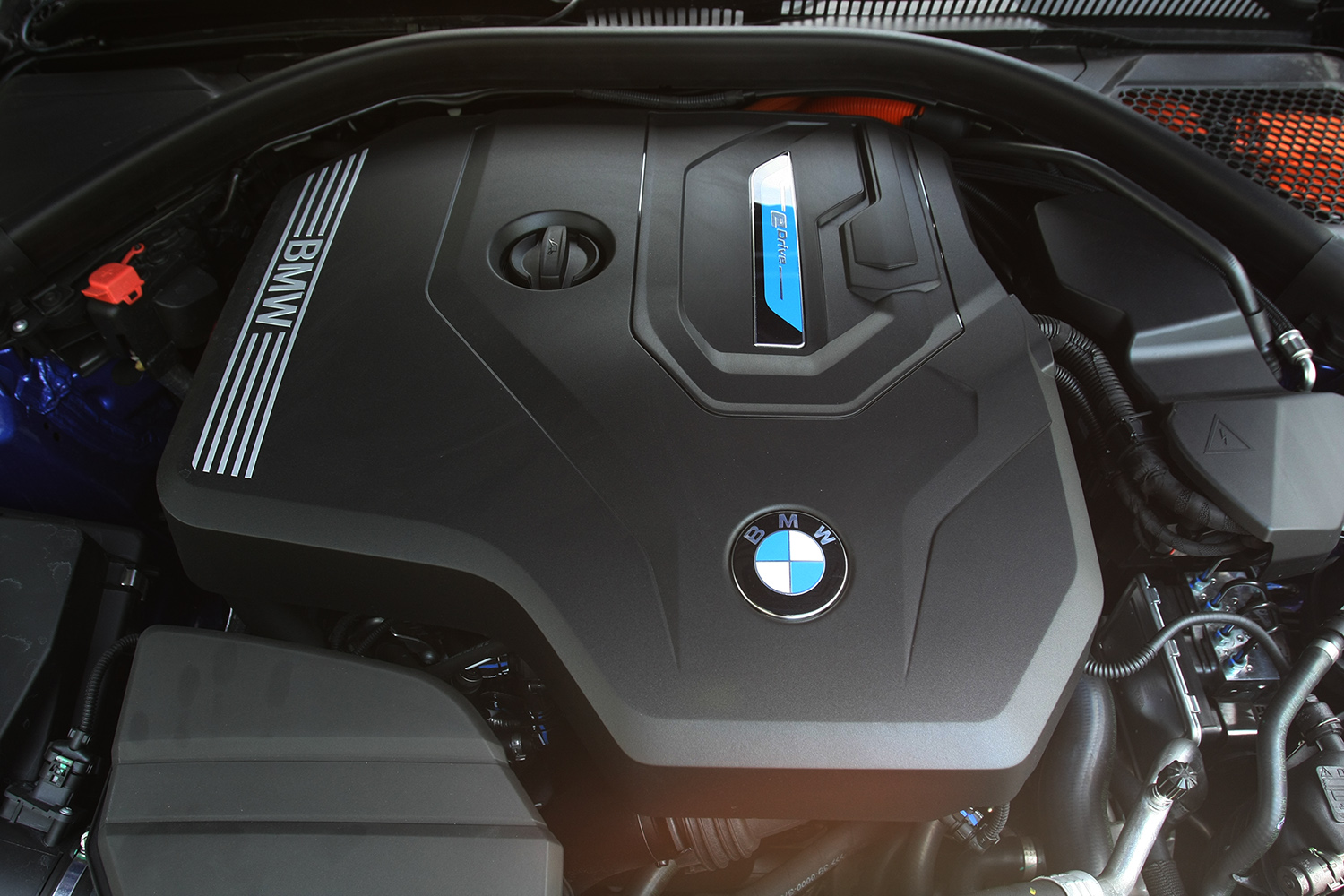 Despite the seamless and punchy performance the 330e has to offer overall, it feels a little soulless which is unsurprising given that the main action comes from a four-pot combustion engine.

The brakes, too, could have had more initial bite when decelerating hard from high speeds which is something we so rarely have to comment in a BMW.

In spite of the smaller fuel tub (down from the regular 52-litre size), boot space in the 330e has been eroded by having slightly higher floor. Unlike in the Merc, at least, the bay is even without any gaps left contributing to easy loading of big stuff. 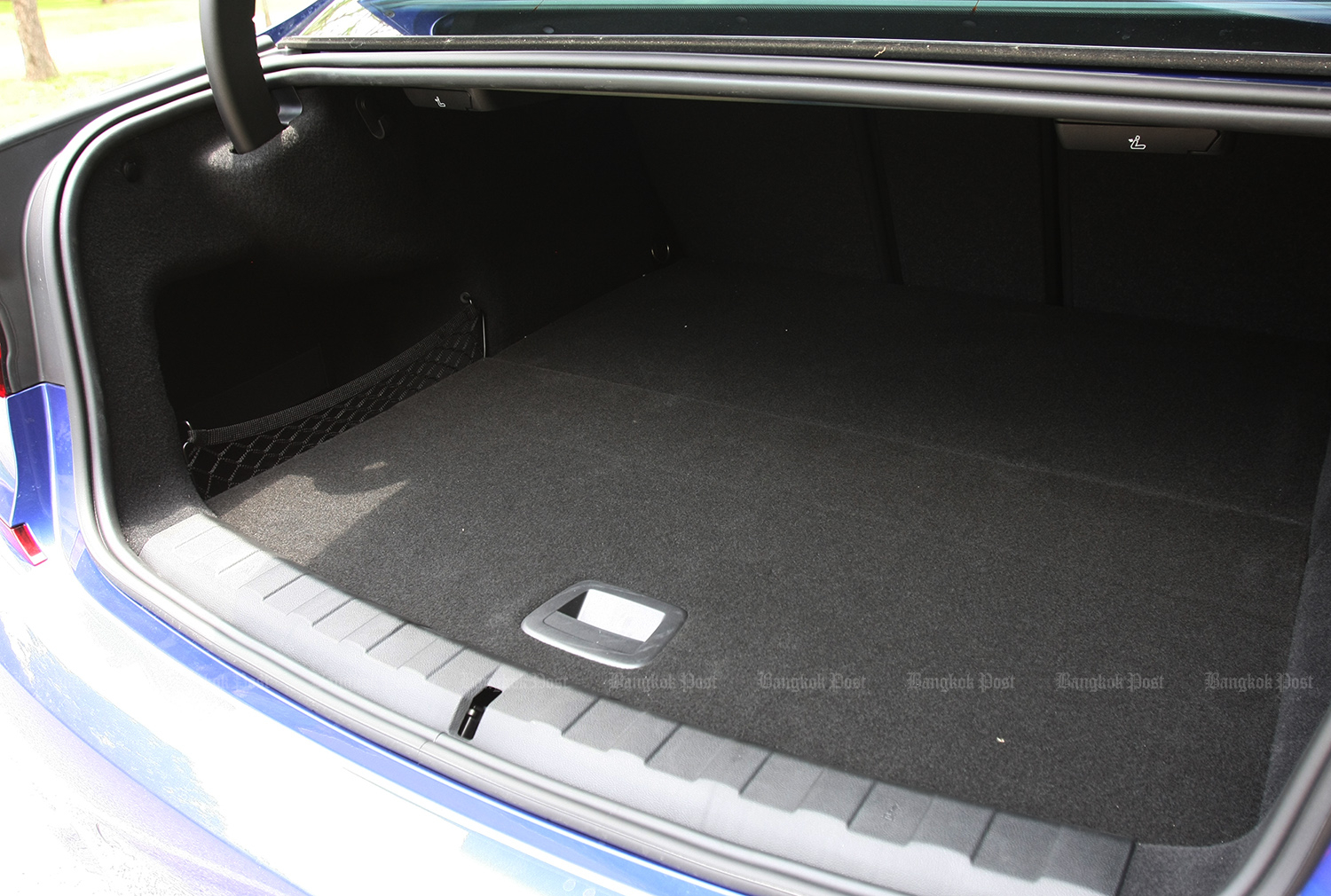 When compared to the old 330e, this new one has several likable aspects like an improved electric driving range and more mid-range power matching non-electrified six-cylinder counterparts.

You can also find these advantages in the C300e which makes a little hard to pick an outright winner when it comes to particular models like these. Despite its inferior stats, the 330e doesn’t really feel it in the real world. And with monetary savings of more than 200k, you’d say the Bimmer should seal the deal.

But if that’s the case, the C300e can be had with the lesser Avantgarde trim going for 2.59 million baht which, in turn, makes it 200k cheaper than the 330e M Sport. In the future, BMW may find it necessary to offer a less fancy spec for the 330e.

Had it not been about initial purchase price, both the latest 330e and C300e are reasonably capable plug-in hybrids at the moment with the former holding the small edge in driving agility. 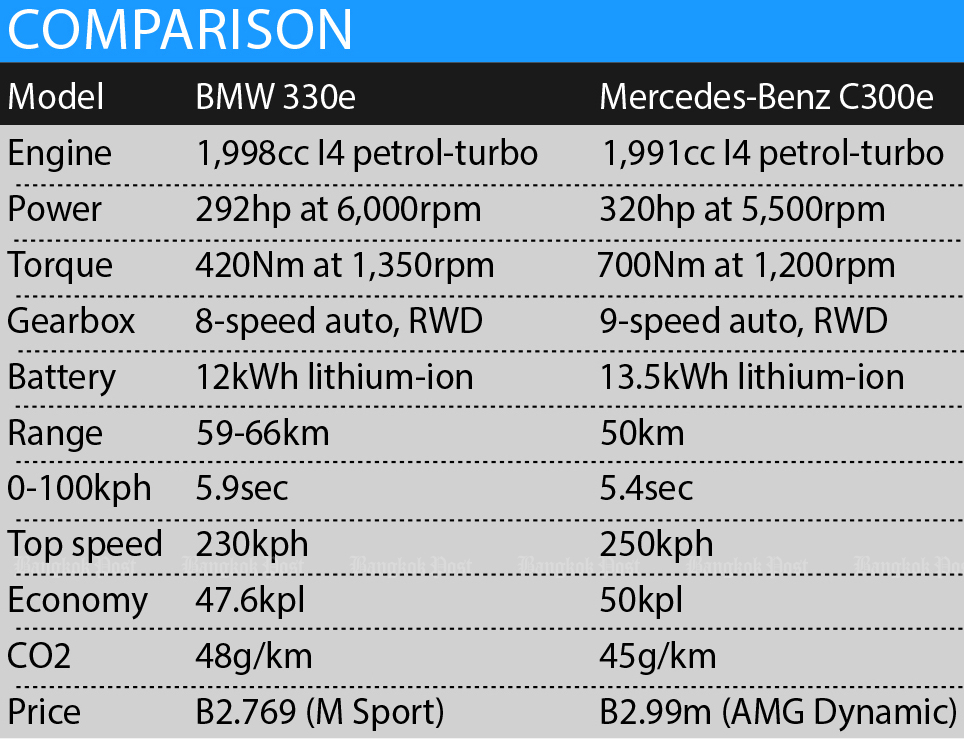 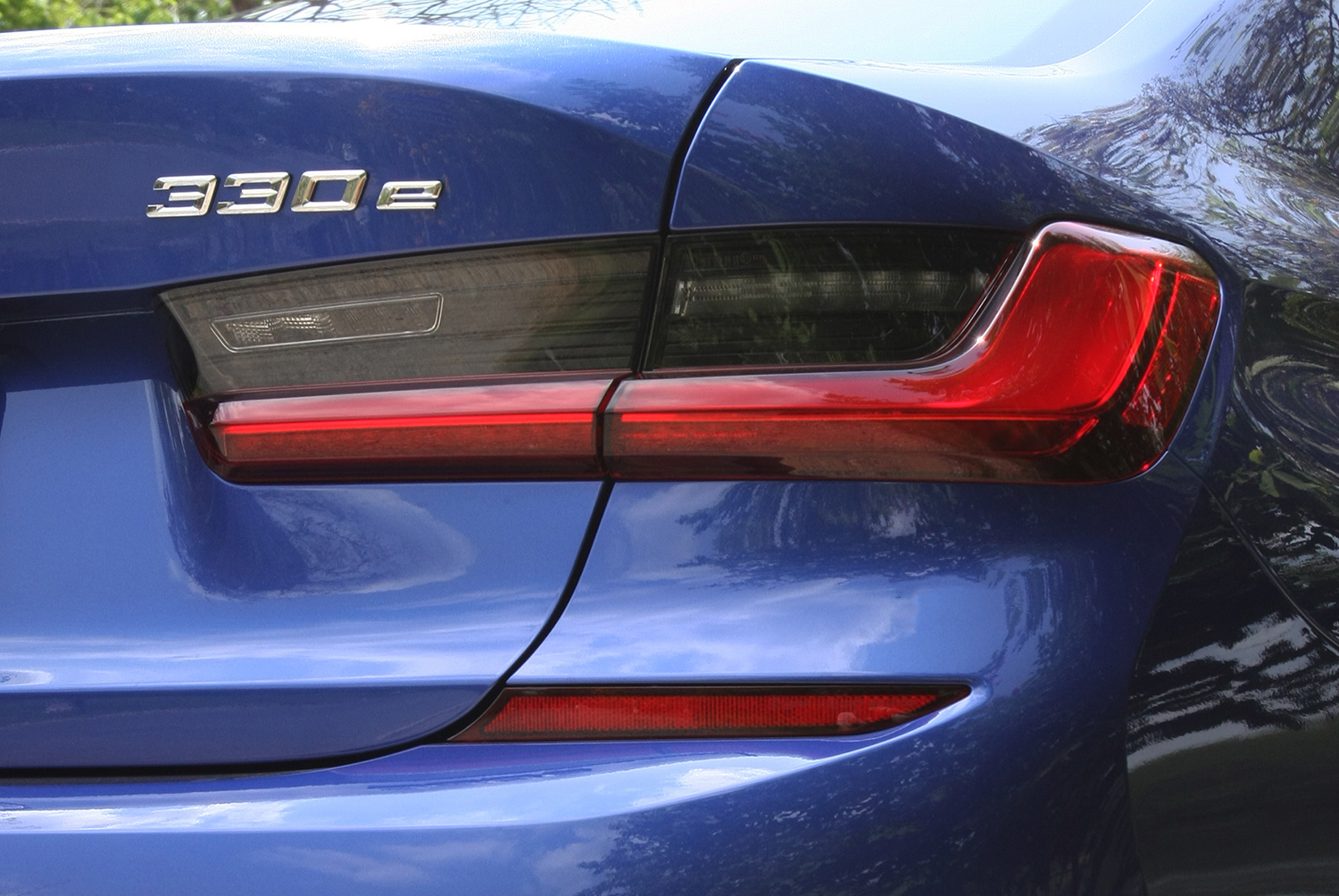 Mitsubishi to benefit from EV growth with Outlander PHEV