Another Volvo pops us with lots of bang for the buck. If only it could inspire. 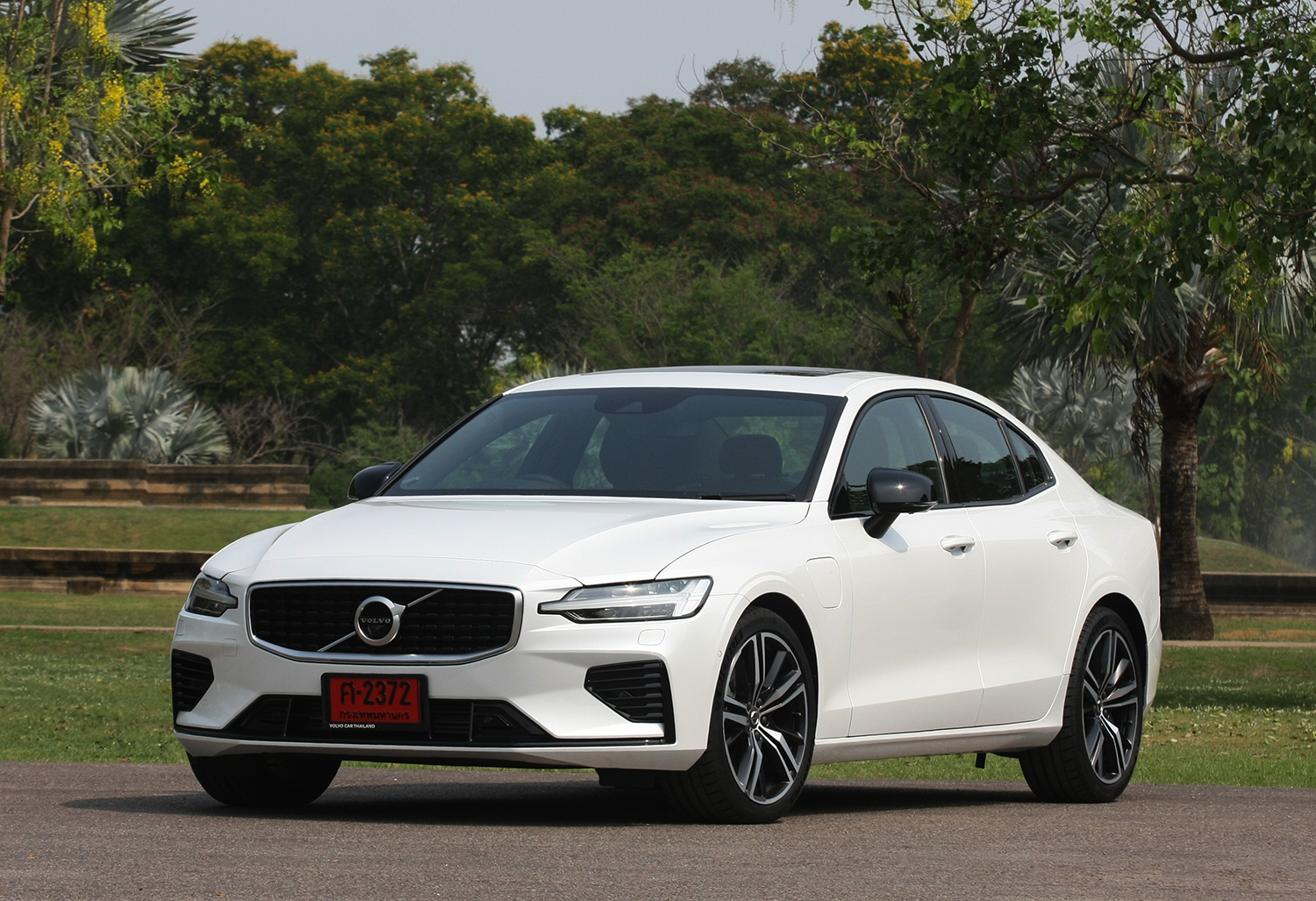 The all-new S60 sedan is another product from Volvo that has landed in Thai showrooms with lots of appeal for potential buyers to consider. And that’s even before driving one.

Take a look at its on-paper stats, for a start. In T8 plug-in hybrid form, the S60 is equipped with 2.0-litre turbo and supercharged petrol engine.

And when combined with the electrical system that supplements it, the combined power rises to an impressive 407hp for a scintillating 0-100kph time of less than 5sec. Mind, that’s a sprint time bracket of a Porsche 911 sports car. 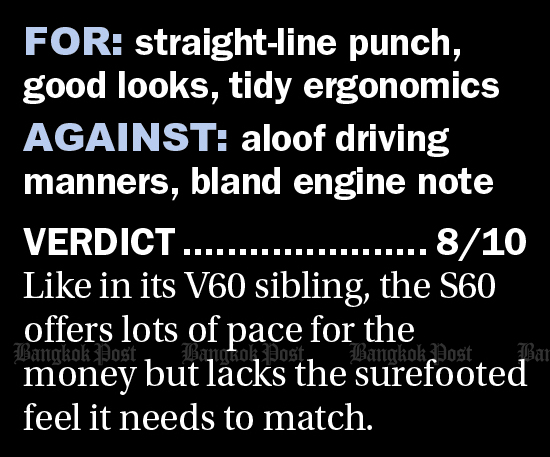 Then there’s the CO2-less driving ability of some 50km in the S60 T8, not to mention the all-wheel drive system supported the electric motor. This is an all-season performance sedan, you could easily say.

Glance over at the rivals’ spec sheet of the S60 T8 and note that the BMW 330e and Mercedes-Benz C300e are supported by less fancy drivetrains producing more modest outputs and driving just the rear wheels.

Yet, both German sedans are priced slightly higher in their equivalent trims, that is, BMW’s M Sport and Mercedes’ AMG Dynamic measured against the R-Design grade of Volvo in the 2.5 million baht price range.

That’s quite a decent effort by Volvo in trying to make its offerings as price-competitive as possible in Thailand. Unlike its Thai-built rivals, the S60 comes from Malaysia. Actually, nearly all Volvos sold here come from that particular Asean nation.

Despite being all-new, many of the S60’s features are shared with those in the latest V60 estate we tested earlier this year.

Apart from the badging, the main difference between the two is merely the body style. While Audi calls its load-carrying A4 with the additional Avant moniker, BMW adds the Touring name. 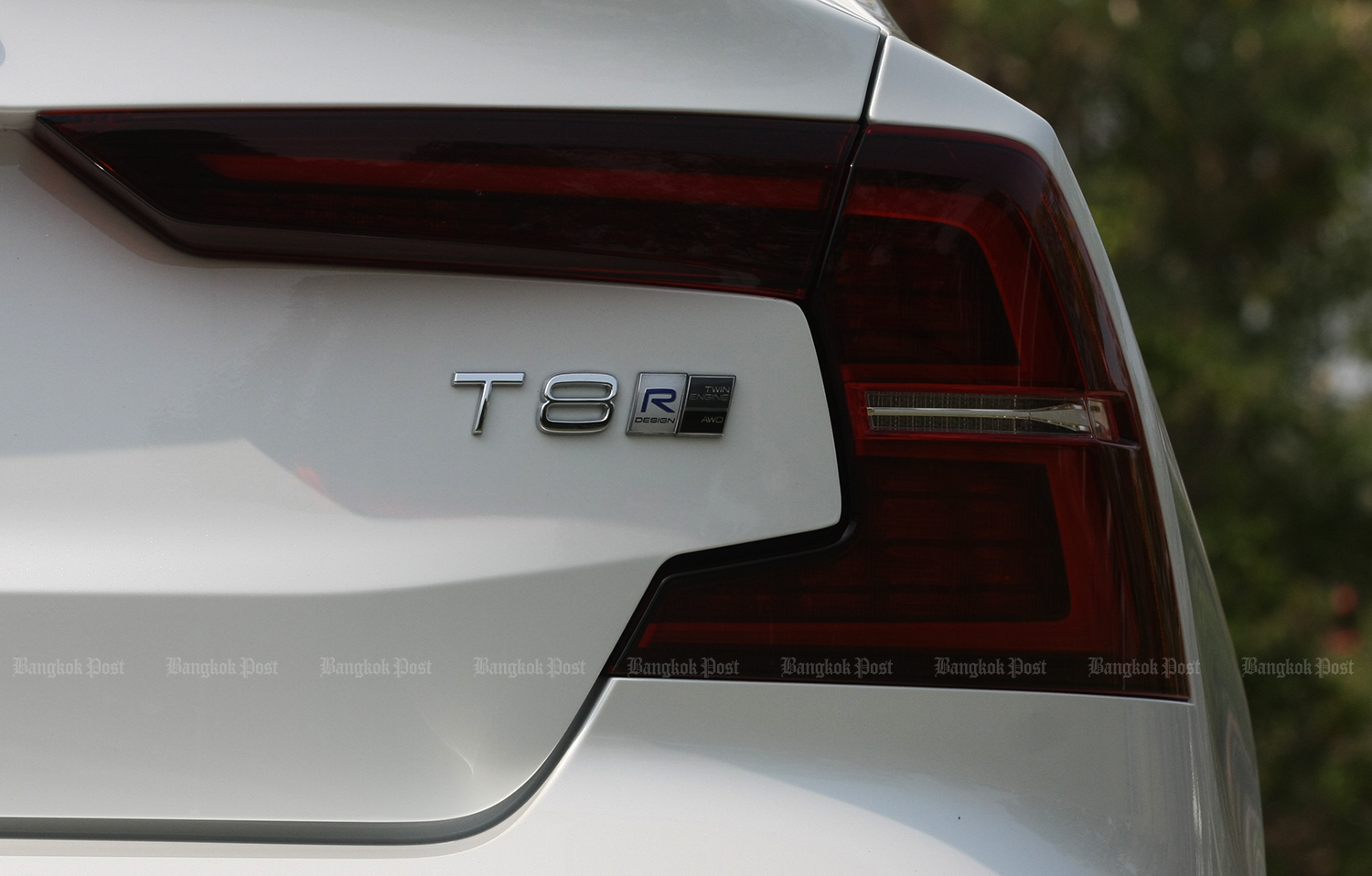 With the same T8 treatment, we found the V60 to be an extremely fast car for its price. It’s not easy to find something with more than 400hp asking for some 2.5 million baht. The same can easily be said for the S60 which is unrivalled in T8 form.

Performance in the S60 T8 never feels lacking and, in fact, always feel lively thanks to three kinds of forced induction available. And as soon as the road ahead clears, the car catapults into the horizon with no fuss.

It’s very quick, and consider that the S60 is the lightest Volvo to receive this T8 drivetrain, the others being V60, plus the porkier XC60 and XC90 SUVs. 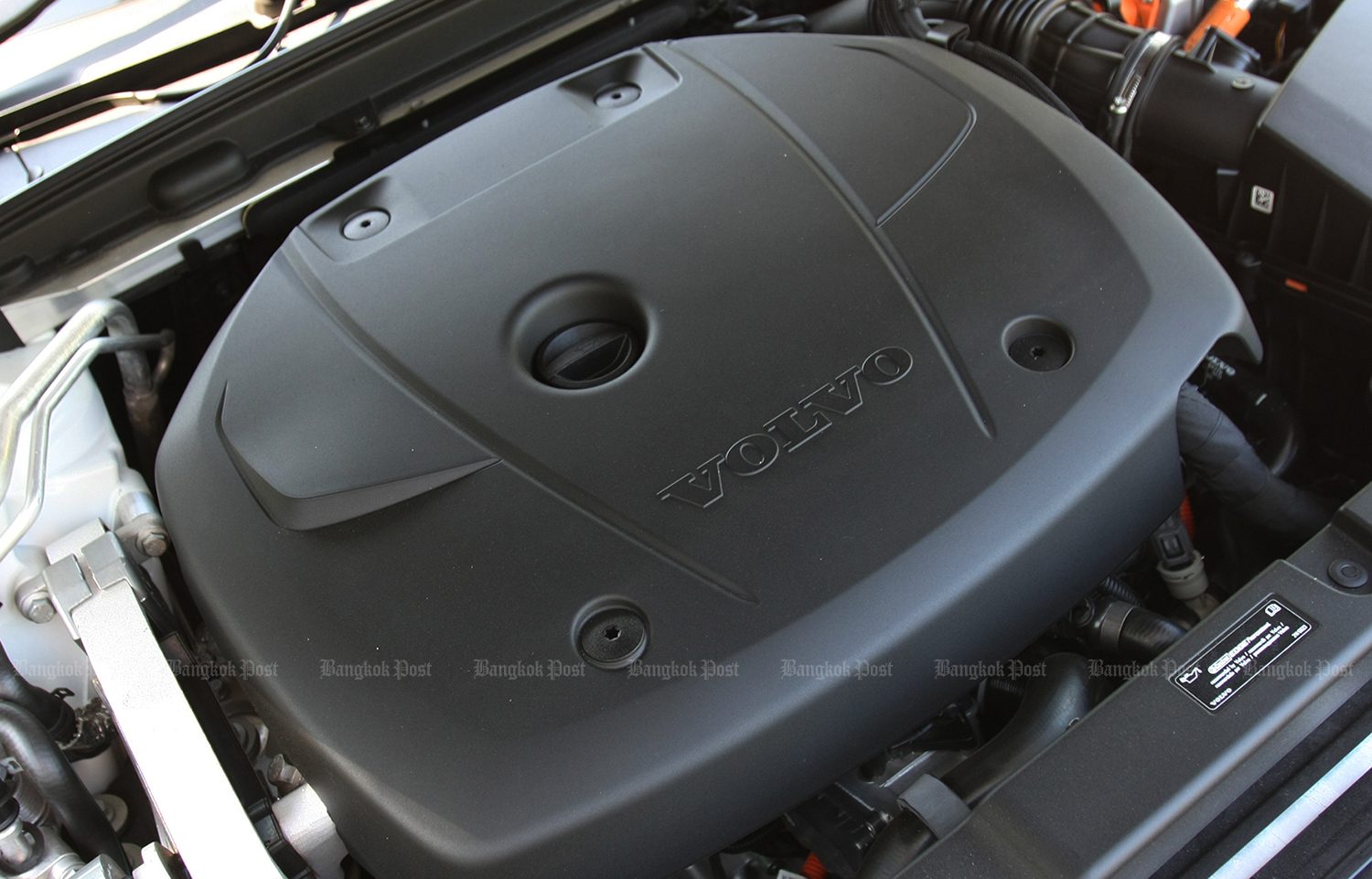 But for all the straight-line punch it has to offer, the S60 seemingly doesn’t have the driving characteristics to match.

Press hard and the suspension feels a touch soft, the steering too light off-centre and the brakes a tad inadequate in outright stopping power. It’s very much like in the V60.

The best remedy is to treat those 400hp-plus ponies as power reserve rather than exploitation to nirvana. With this in mind, the S60 T8 (and the V60, too) packs a convenient punch when necessary while being easy enough to handle in the hands of more restrained drivers.

Drive the S60 T8 more gently around town, though, and it’s an effortless handler. Although the ride is a little lumpy on those gorgeous 19in wheels at times, it mostly feels cushy and there seems to be less noise coming from the outside than in the V60. 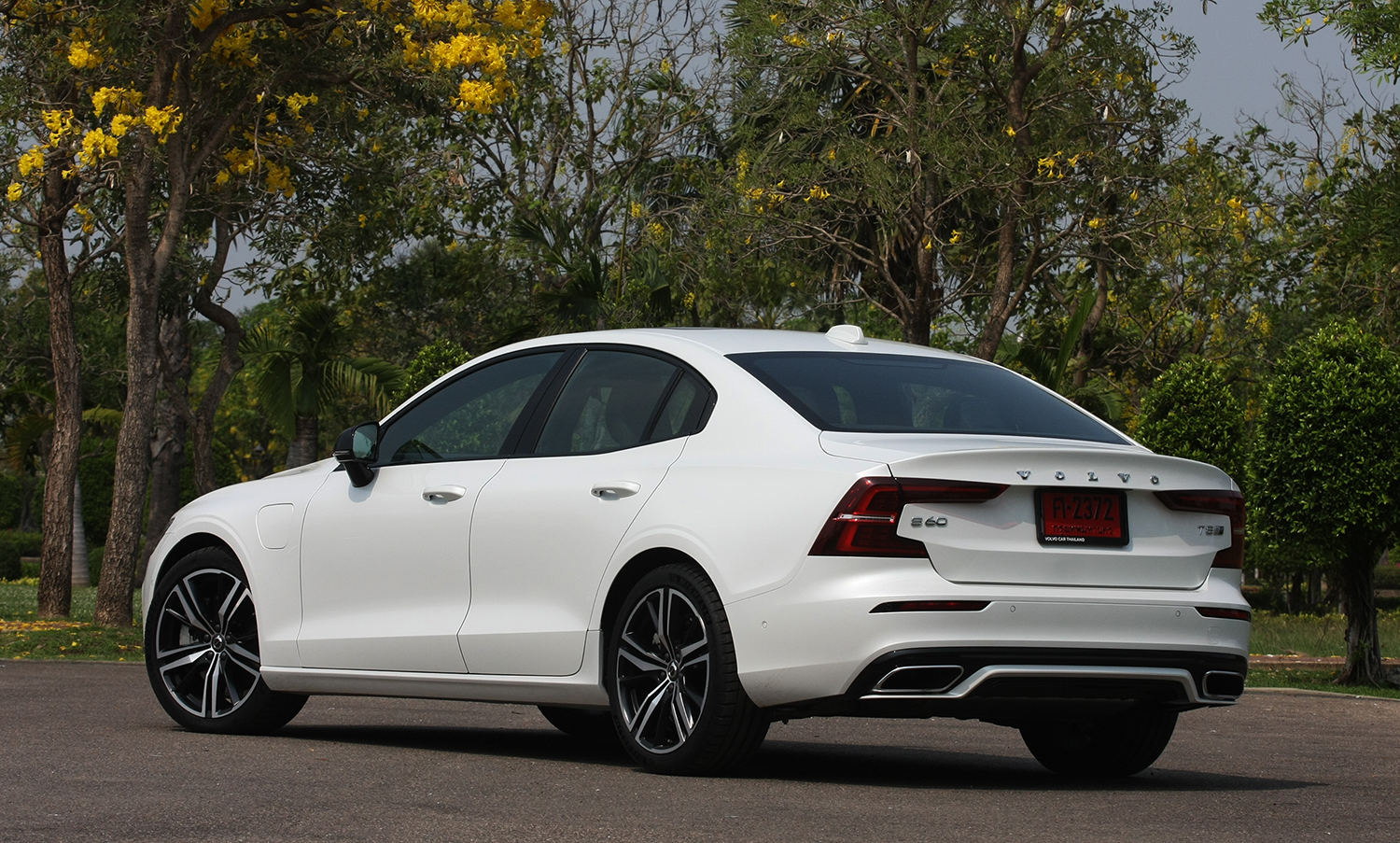 We found the V60 to be a sufficiently versatile and spacious estate, and the same could be said for the S60 as a sedan.

The rear quarters have ample leg room and offer decent seat comfort, while the boot is still capacious for a car housing a plug-in hybrid system. 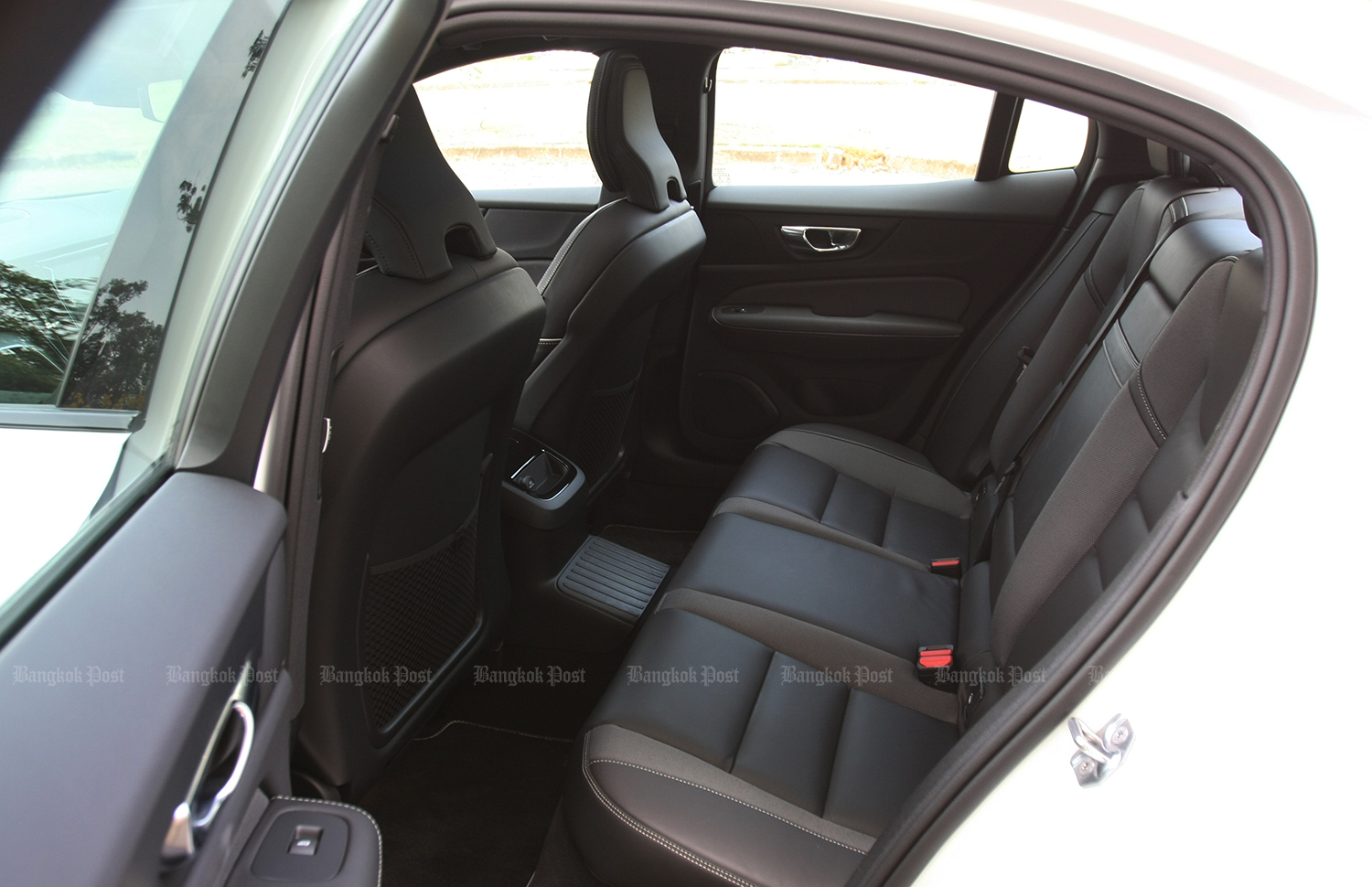 Because the S60 sits on a platform designed additionally for electrified components since its inception, electrical bits like the battery pack have been kept in enhanced locations.

In this case (and the V60, XC60 and XC90), the lithium-ion battery is placed along the transmission tunnel between the front and rear seats. 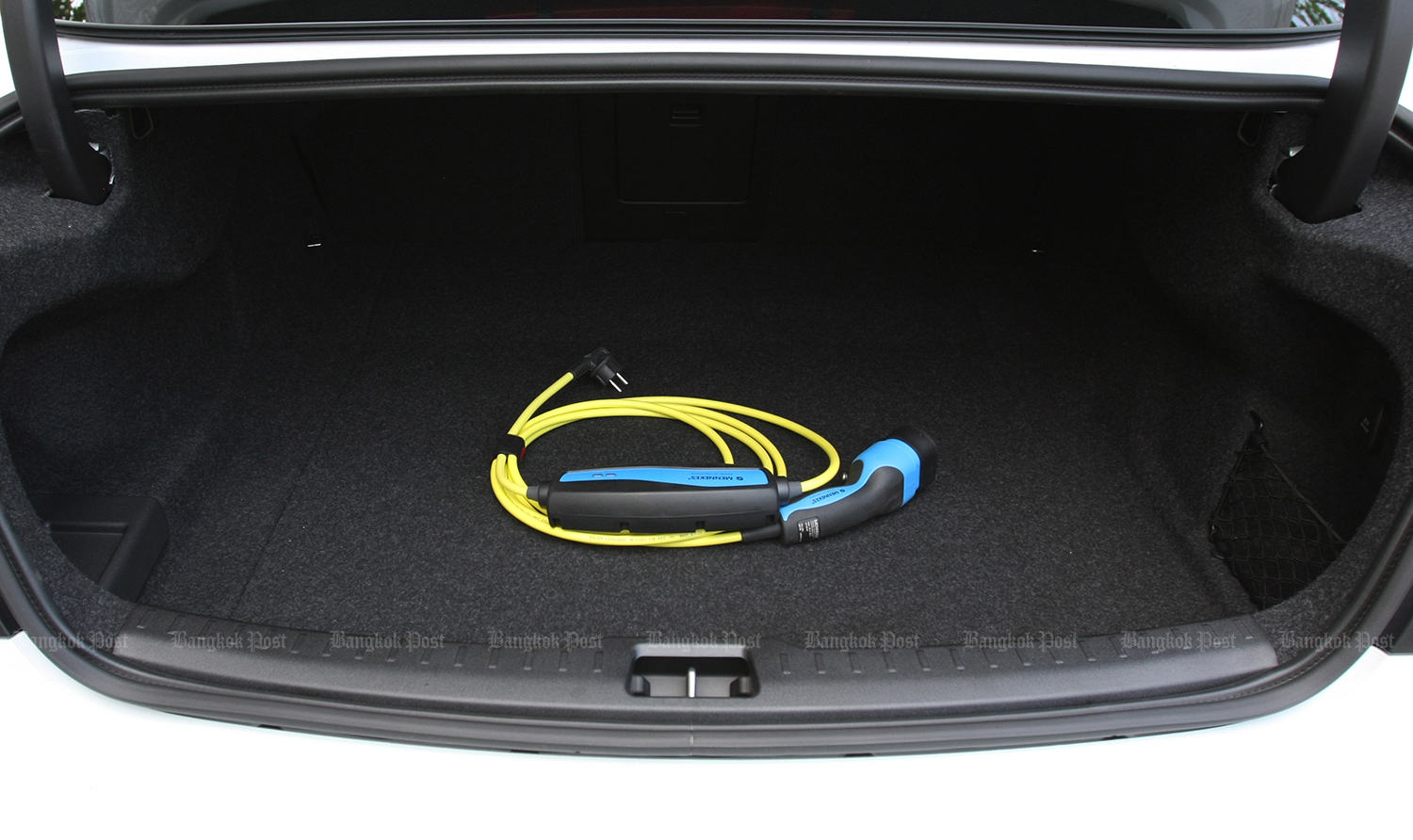 The S60’s interior design also scores nicely in visual terms, apart from just serving a purpose for something.

OK, that dashboard and iPad-style central screen is so familiar with those used in other 60 and 90 Series models, but they work well and look good on the eyes.

To top things off, the cabin uses nice material here and there, and especially on the fascia to make the driving cockpit feel first rate. 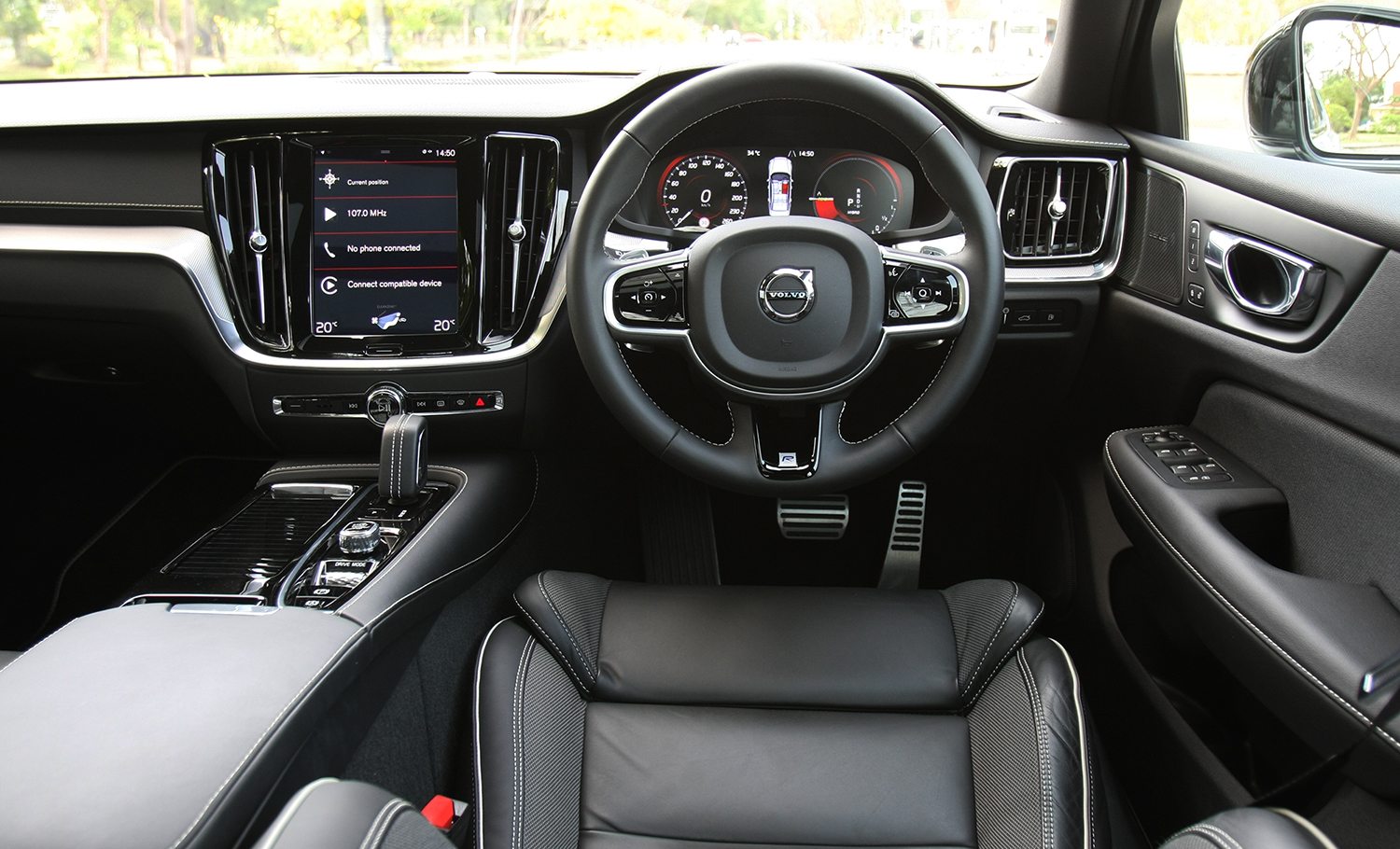 As for the exterior, the S60 looks just like any other Volvo. A Russian-doll family has already been in the making for quite some time in Volvos.

However, the S60 has crisp lines and looks distinctive in-class, and that could probably matter more for Volvo.

In the typical fashion of Volvo, the S60 is comprehensively equipped with convenience, safety and driver-assist features.

Buyers who like to have everything will be content to know that R-Design still undercuts its rivals in price. Those who don’t really cherish all those things would possibly even like the 400k savings to be made the Pure spec.

In the end, the S60 is a premium car worth looking at, especially for punters who have set their eyes on the semi-electric 3 Series and C-Class and aren’t too perturbed about a less superior badge (that’s the case in Thailand for Volvo against a Merc).

Maybe with less power, the S60 may have felt like a more rounded sedan. But as we see it now in T8 form, the S60 surely wants to make a statement about its bang-for-the-buck position, even if the concept isn’t that much different from an XC90 T8. 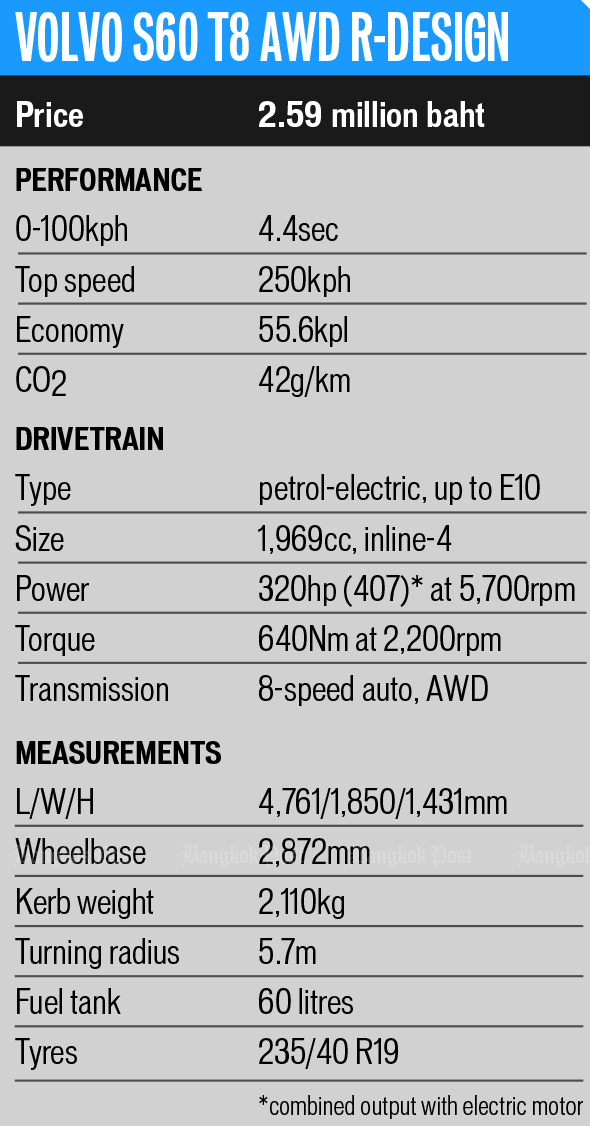 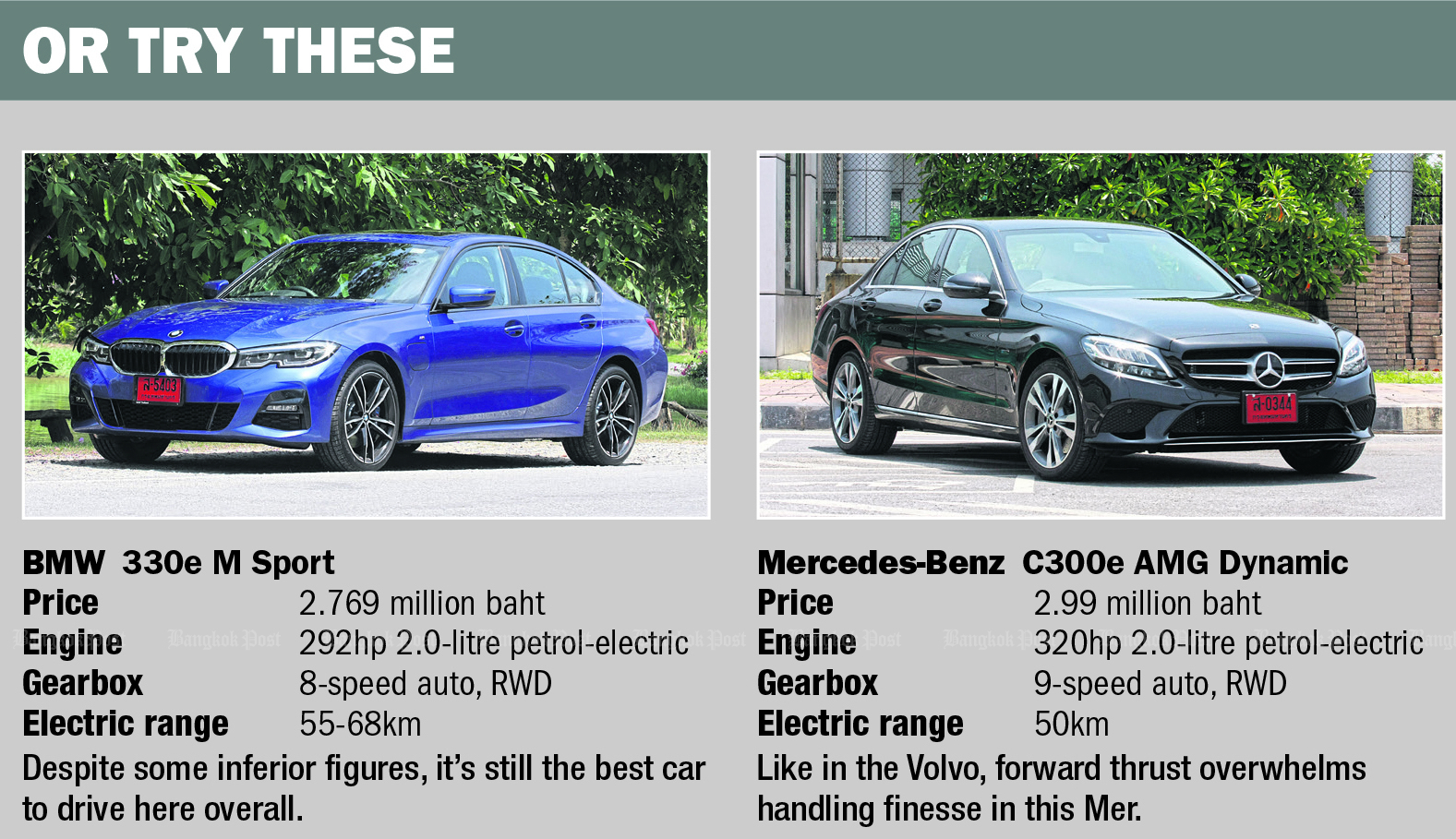