The Mercedes-Benz GLC is still highly likeable at mid-life point, now made better with a new engine to choose from. 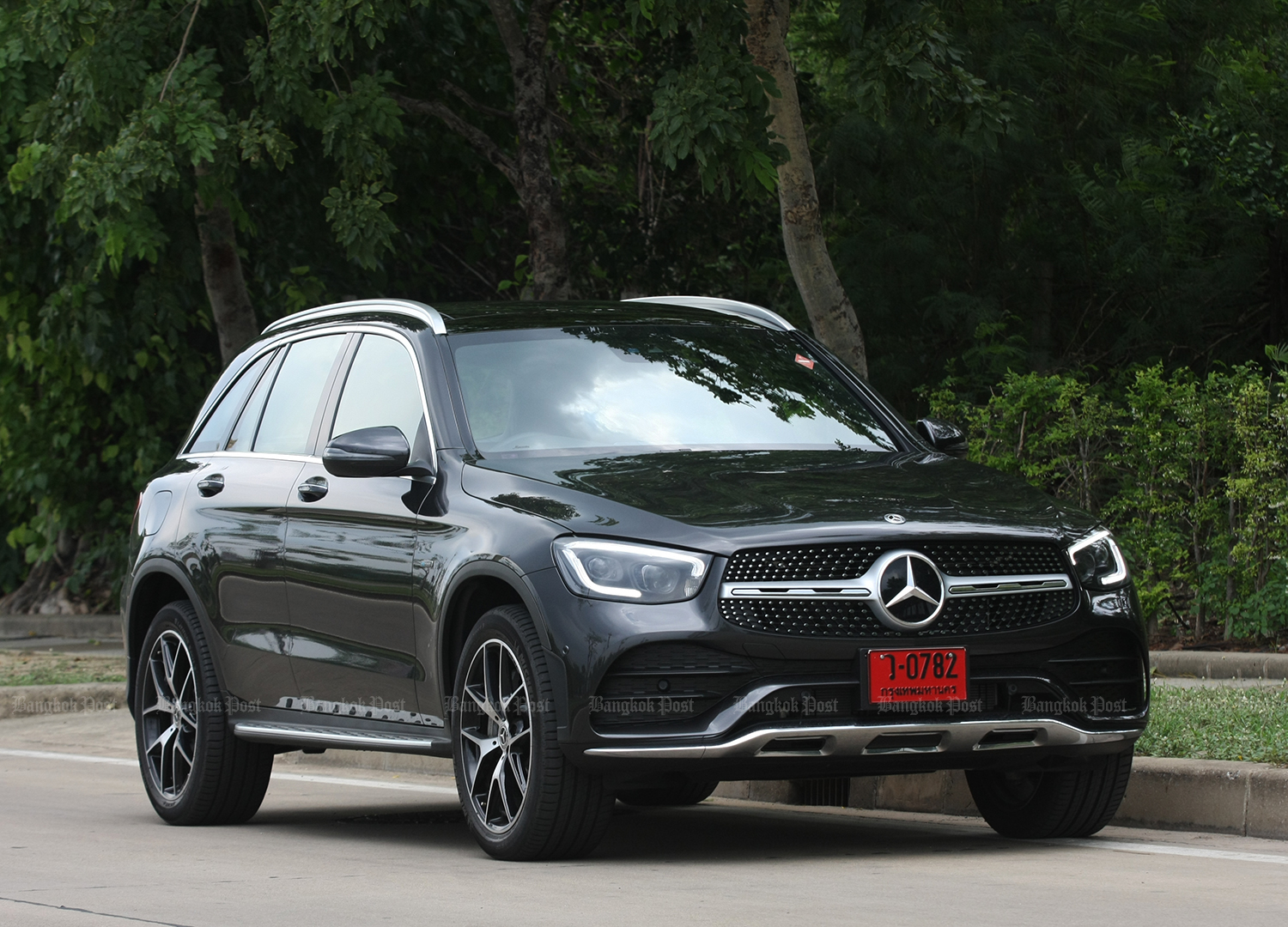 The GLC becomes the next Mercedes-Benz model in Thailand to have a plug-in hybrid to choose from after the C, E, S-Class sedans and GLE SUV.

The GLC300e, also available in the sporty GLC Coupe guise, features the 2.0-litre petrol-electric hybrid producing a combined 320hp and 700Nm of torque. Transmission is via nine-speed torque-converter automatic.

This is the same drivetrain and gearbox as in the C300e and E300e, with the exception of 4Matic all-wheel drive that comes as standard in the GLC300e.

The arrival of the semi-electric GLC coincides with the model’s mandatory mid-life update in Thailand which, without going into every detail, include redesigned twin-layered front grille and digital instrument panel in the cabin.

There’s only one trim available in the GLC300e: AMG Dynamic going for 3.479 million baht and competing head-on with the Volvo XC60 T8 R-Design in price (see graphic for details).

Also landing in this price range recently but not yet rated by us on Thai roads include the Land Rover Discovery Sport and Range Rover Evoque, whose plug-in hybrids are made interesting with a small 1.5-litre three-cylinder petrol engine.

While the Audi Q5, BMW X3 and Porsche Macan have yet to embrace any form of electrification, the Lexus NX’s hybrid is a self-charging variation without plug-in facility. 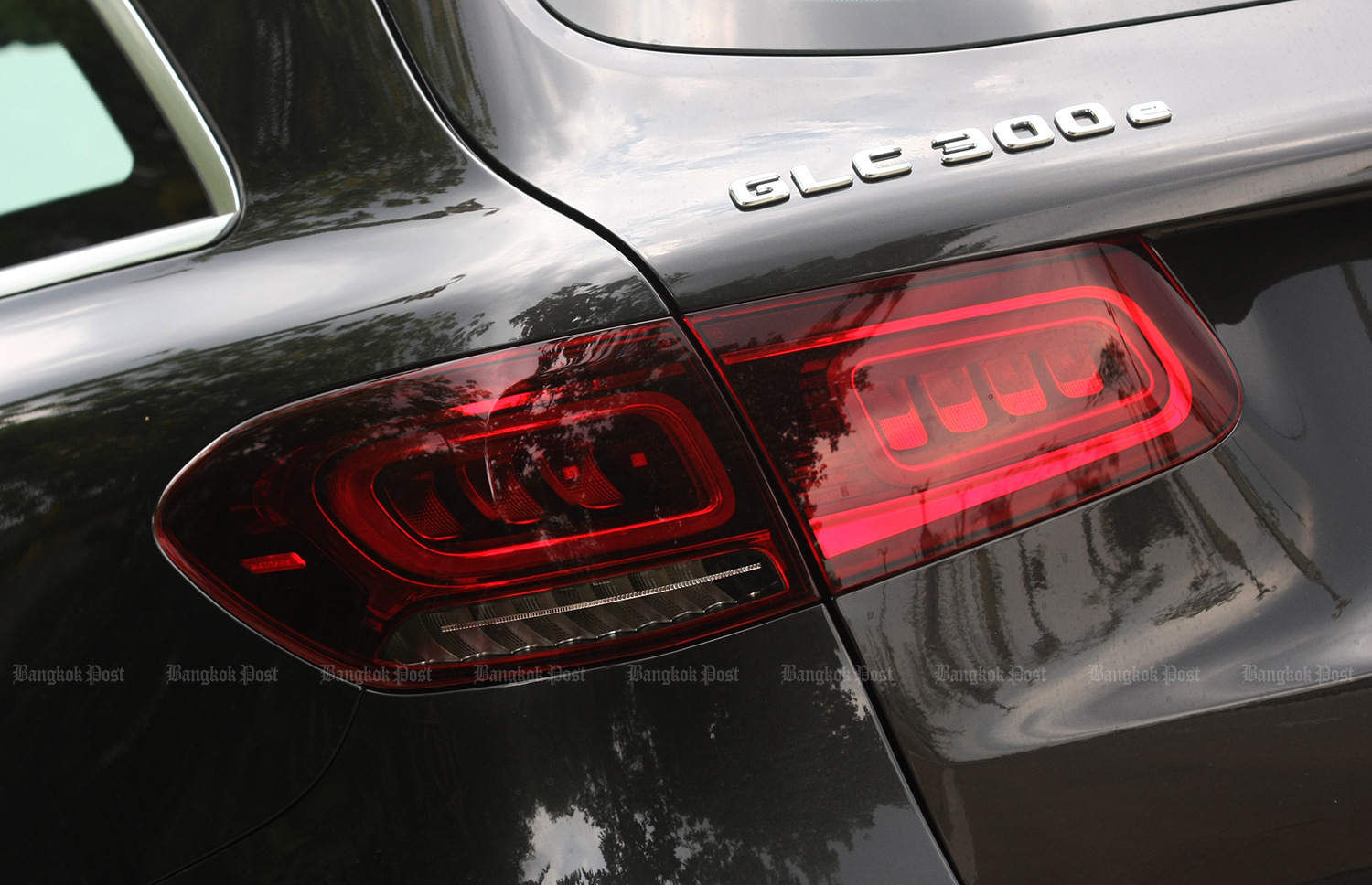 For quite some already, Volvo’s T8 hybrid has managed to look good on paper thanks to a heady combined output of 407hp. It should continue doing so, particularly against this Merc.

However, the GLC300e doesn’t feel inferior in real-world driving maybe because of its explosive torque rating of 700Nm. You can feel this when you give the gas pedal a good tap anywhere within the legal speed limit. Simply put, there’s a huge amount of forward thrust available.

It’s not all about big performance, though. In all-electric mode, you can swiftly glide the GLC300e around town and on motorways thanks to increased capabilities of the lithium-ion battery.

Speaking of electrical bits and how they’re packaged, it appears the GLC300e is the least compromised of all Mercs with plug-in hybrid system. Which isn’t surprising, after all, because the GLC has been designed to accommodate fuel-cell and BEV tech (like the EQC) in world markets.

Despite a new electrical widescreen being constantly made available in every new Merc these days, the separate digital panel behind the steering wheel in the GLC goes well with the rectangular bit on the centre console. It might look a little conventional, but still works well – just like when the C-Class was facelifted two years ago. 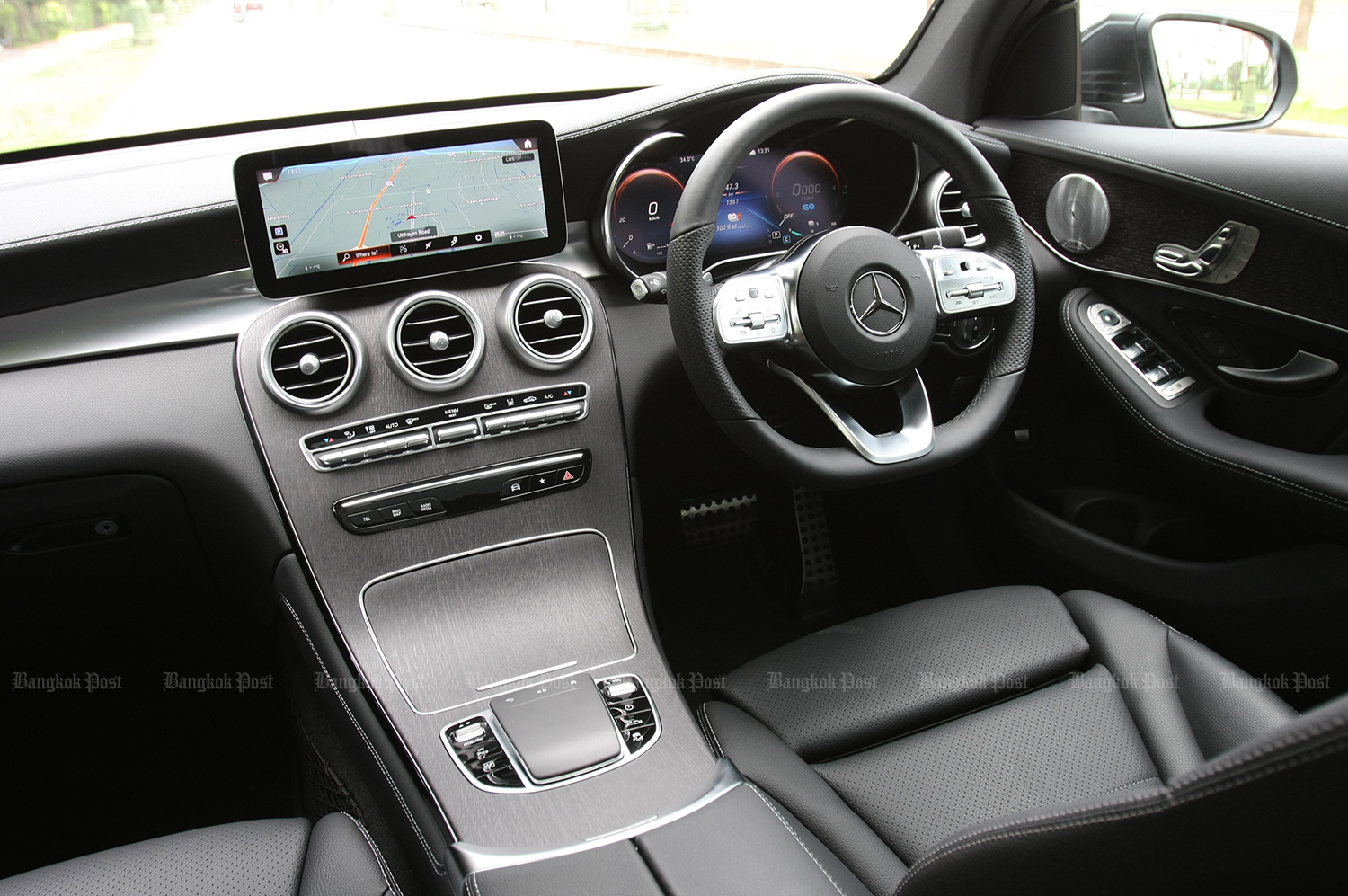 Despite some enhancements in packaging, the GLC300e does have some weight issues that can be felt from time to time.

Under hard acceleration or on twisty roads, there’s lots of body movement in the GLC300e. The suspension setting itself is already on the soft side (although it might be a different case for the GLC Coupe), so the GLC300e rolls, dives and pitches quite excessively.

As with other plug-in hybrids (and BEVs), their claimed driving range is always optimistic especially when used in countries with demanding driving conditions like Thailand. So although you’d probably won’t achieve the circa-50km Mercedes is boasting in the GLC300e, you should be getting at least half of that after a full charge.

It would have been nice if there was the option of managing battery content like with “charge” or “save” modes in the C300e; the GLC300e doesn’t have them. 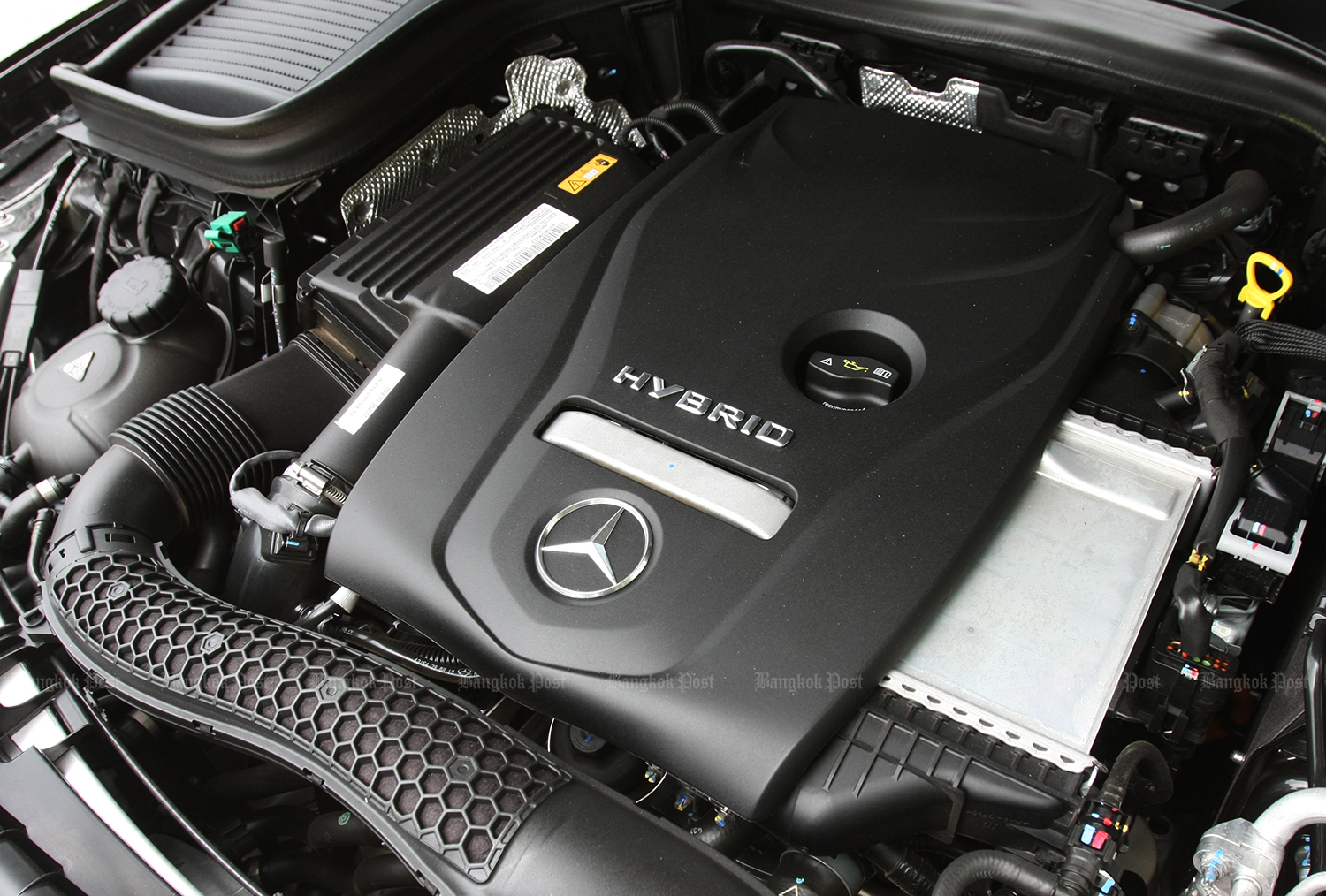 The GLC has been one of the most aggressively priced premium mid-size SUVs since it debuted in Thailand three years.

That remains the case today for not only the diesel version but this new plug-in hybrid variant. It’s good to see Mercedes-Benz Thailand making an effort even if the X3 has yet to join the arena.

There will many people buying the GLC (and especially the GLC Coupe) for daily use, and this is where the GLC300e makes sense with its semi-electric ability.

It may not win over the X60 T80 in outright product substance, but there’s already a lot to like about GLC300e, not to mention its stronger badge credentials among Thais.

What we have here now are two GLCs both capable in their own rights, the GLC300e being for urbanites and GLC220d for those doing more of the recreational stuff upcountry. 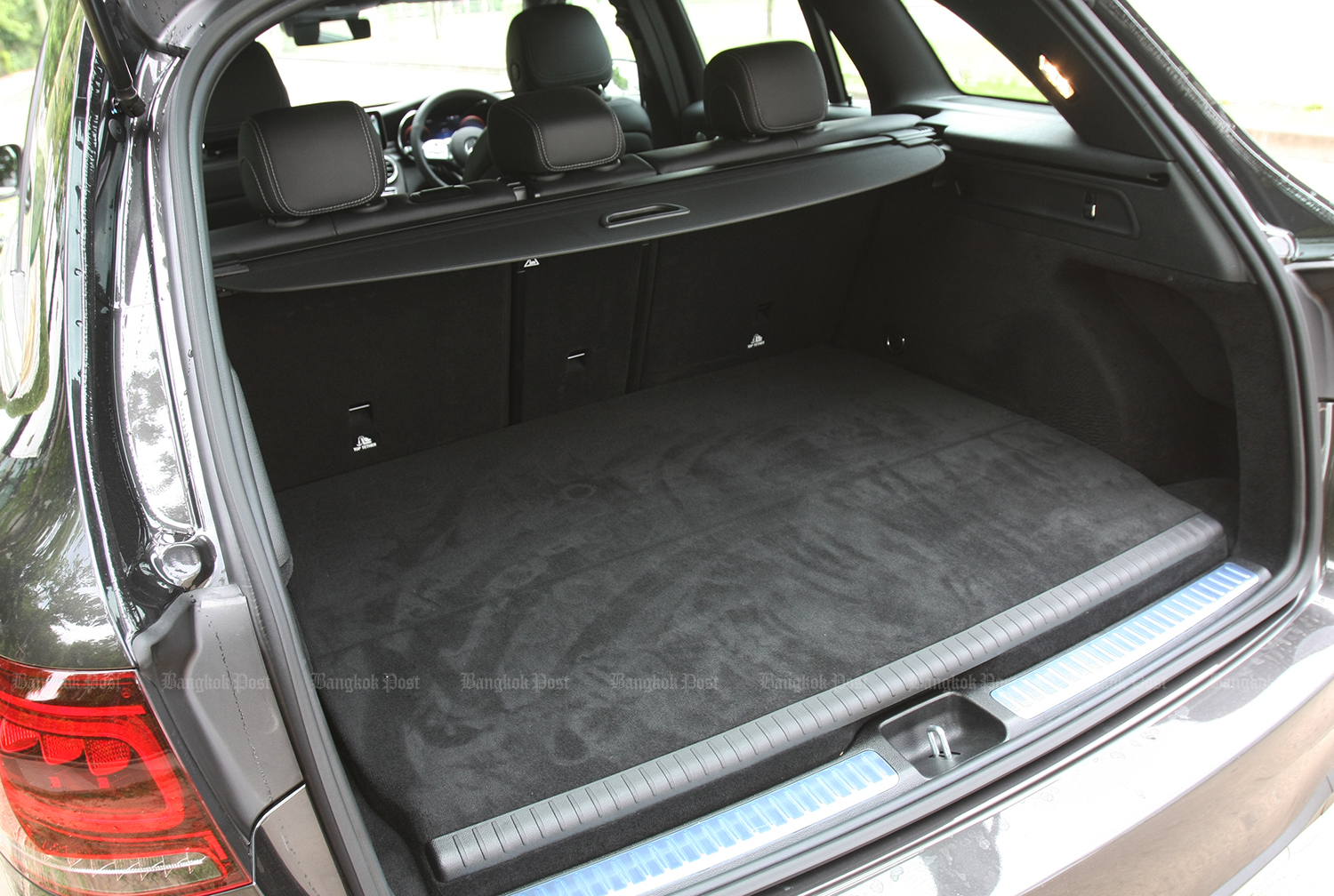 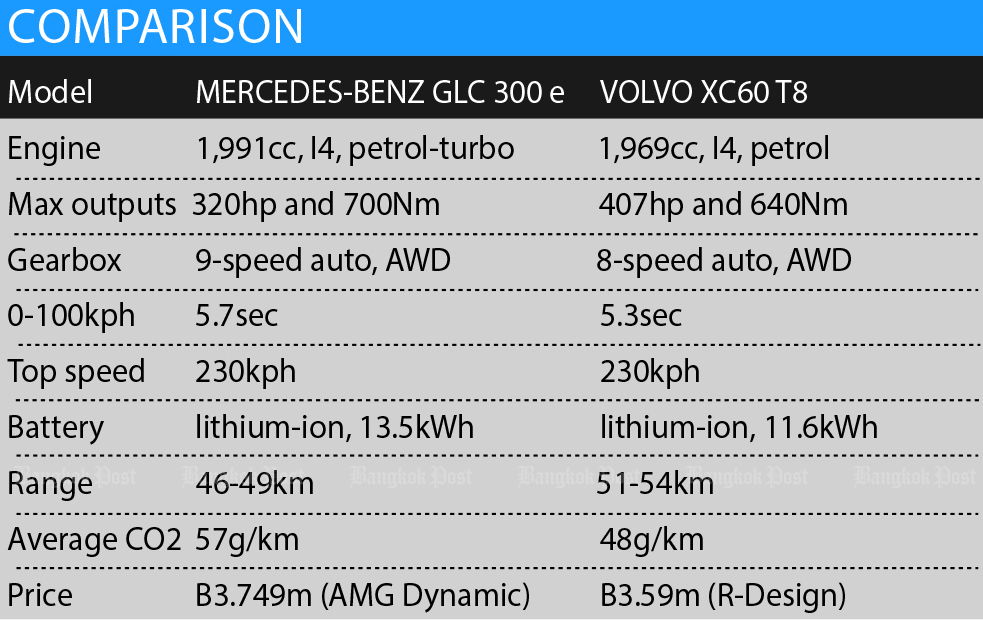