Turning off traction control adds to the fun on a gravel surface.

There is a lot of speculation about why Harley-Davidson wants to make an adventure touring model that doesn't match the rest of its line-up, which is all about the Sportsters and Touring bikes.

The answer is that Harley-Davidson started to make changes by developing the Milwaukee-Eight engine a few years ago to make its bikes friendlier for all riders as well as improve the power and electronics across all models.

After launching the Softail family, the company unveiled the great touring fleet and now the all-new Pan America 1250 Special Touring Adventure with a brand new liquid-cool V-Twin 1250cc engine. The design still follows the mini shark nose, which I like because, after all, this is Harley-Davidson.

The Bangkok Post team created a test ride route somewhere in Nong Ya Plong in Phetchaburi Province. I love the idea of not only testing the Pan America but the chance to make this story a documentary. Nothing is more perfect than riding with a cowboy. 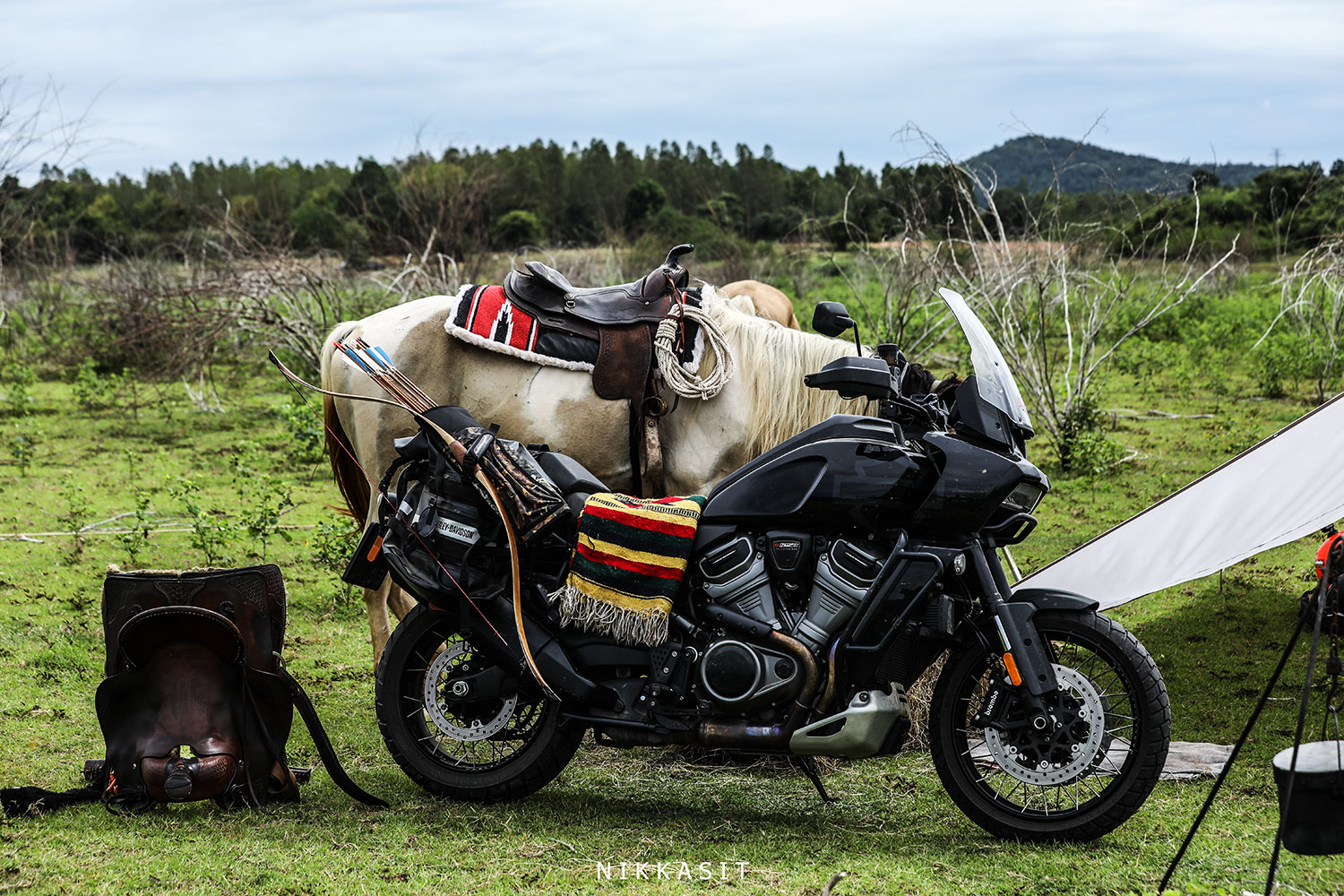 The perfect companion and the perfect destination for the Pan-America.

Let's get into the riding.

After warming the engine for a few minutes and then revving the rpms just a little, the engine is not quiet and doesn't sound like other HD models. The riding modes are easy to use -- Auto, Sport, Road, Rain, Offroad and Offroad Plus.

With a 1.75m tall plus Timberland booth, only one foot can be placed firmly on the ground. For short riders, automatic adjustable seating available.

The Pan America is easy to handle. Although the engine is not as smooth as the BMW R1200 GS, it does have its own character.

The bike is good on the tarmac but many people are interested in its performance on gravel.

Trying the Offroad Mode and riding on low rpm, the torque is good as usual. The traction control works nicely if you want to play it safe. However, since there was a canal along our ride, I couldn't switch off traction control while the bike was moving. Instead, I needed to stop first to turn it off. When riding through water, both my legs could not snatch onto any part of the frame, so I had to use my knees and press the foot peg. I think using endure boots can help when it comes to standing and riding on gravel roads.

The bike's grip to the ground does not have an understeer, which usually causes problems for a heavy bike like this, but it was enough to make me feel comfortable. Also, thanks to the design of the new chassis and frame, I can now push it a little further on muddy surfaces and it performs well. After getting used to the bike, I give it a good grade when it comes to adventure riding that involves climbing hills and making turns. 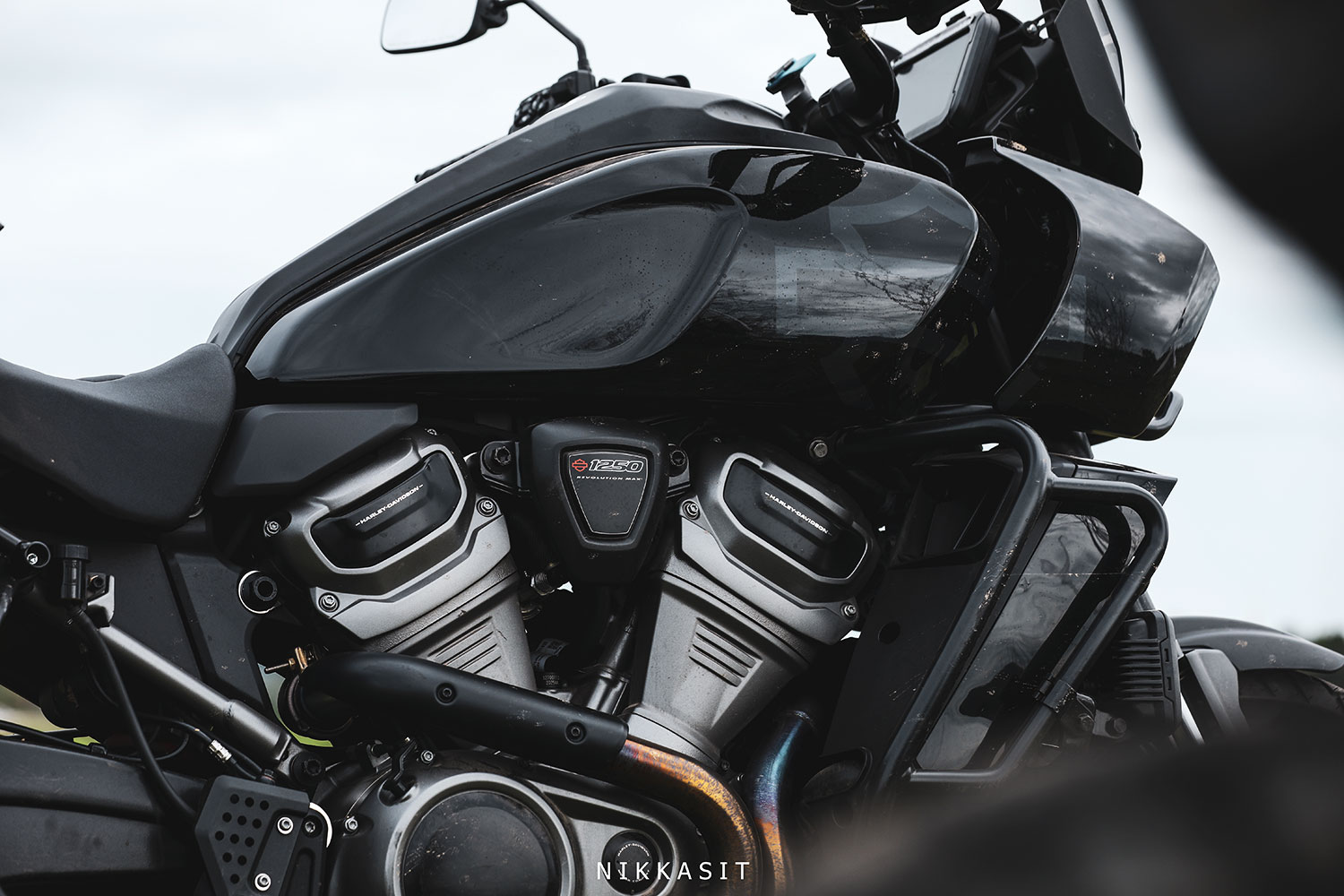 The all-new V-Twin 60-degree engine provides riding pleasure and is easy on the eyes.

On a freeway, going 100-120kph is comfortable but it is also outstanding at 160kph to pass other vehicles. The Pan America is outstanding in this manner. Feeling safe is the key. Also, it's not too hard to do a wheelie.

Besides endurance riding, I also tried it in the city. Riding through heavy traffic within Bangkok gave me a clear understanding of what the Pan America can do. It's very friendly and at 255kg for an adventure bike, it is well-balanced and easy to control. The heat from the engine didn't cause any problem.

But for short rides, it will have a hard time, especially when going at slow speeds or parking on slopes.

I don't really like the cable clutch that comes with the bike. I prefer hydraulic clutches because the cable always needs to be readjusted after using it for a while. Also, it is annoying how difficult it is to find the neutral gear.

Overall, I love the balance and design of the Pan America. The bike doesn't look bulky. The centre stand works well and this is important to me. The new V-Twin 60-degree engine is powerful for touring and cornering. The power at low to medium range is more than enough when it is time to climb hills with narrow roads.

This bike makes me want to ride to Chiang Rai now.