On a charge
Auto
Review

Will the all-electric Mini Cooper SE suit your lifestyle?

We all know that electric cars and motorcycles are coming to the Thai market but there is a lot of speculation about whether the country is ready or not, especially regarding the current charging network and general range anxiety. For Bangkok Post readers, other big issues include handling and design.

The motoring section of the Bangkok Post believes electric vehicles are not the future, but the present. As such, the more we learn about "EV life", the more we are ready to make a good choice about when it is time to purchase our next car.

Today, we will be reviewing the 100% electric Mini.

The Mini Cooper SE is getting a lot of attention and the first deliveries are being made, so now is a perfect time to test it.

We hopped in a Mini Cooper SE in Chiang Mai because the city is perfect for such a test ride. It has a lot of traffic but we were able to test the car's power and range travelling through mountains and to nearby cities.

Most importantly, we wanted to know if the electric car is fun to drive when compared to a regular Mini.

The Mini Cooper SE's virtual launch in July 2021 gave us details that set a good standard for electric vehicles such as design, battery size, interior space and importantly, the app that comes with it. 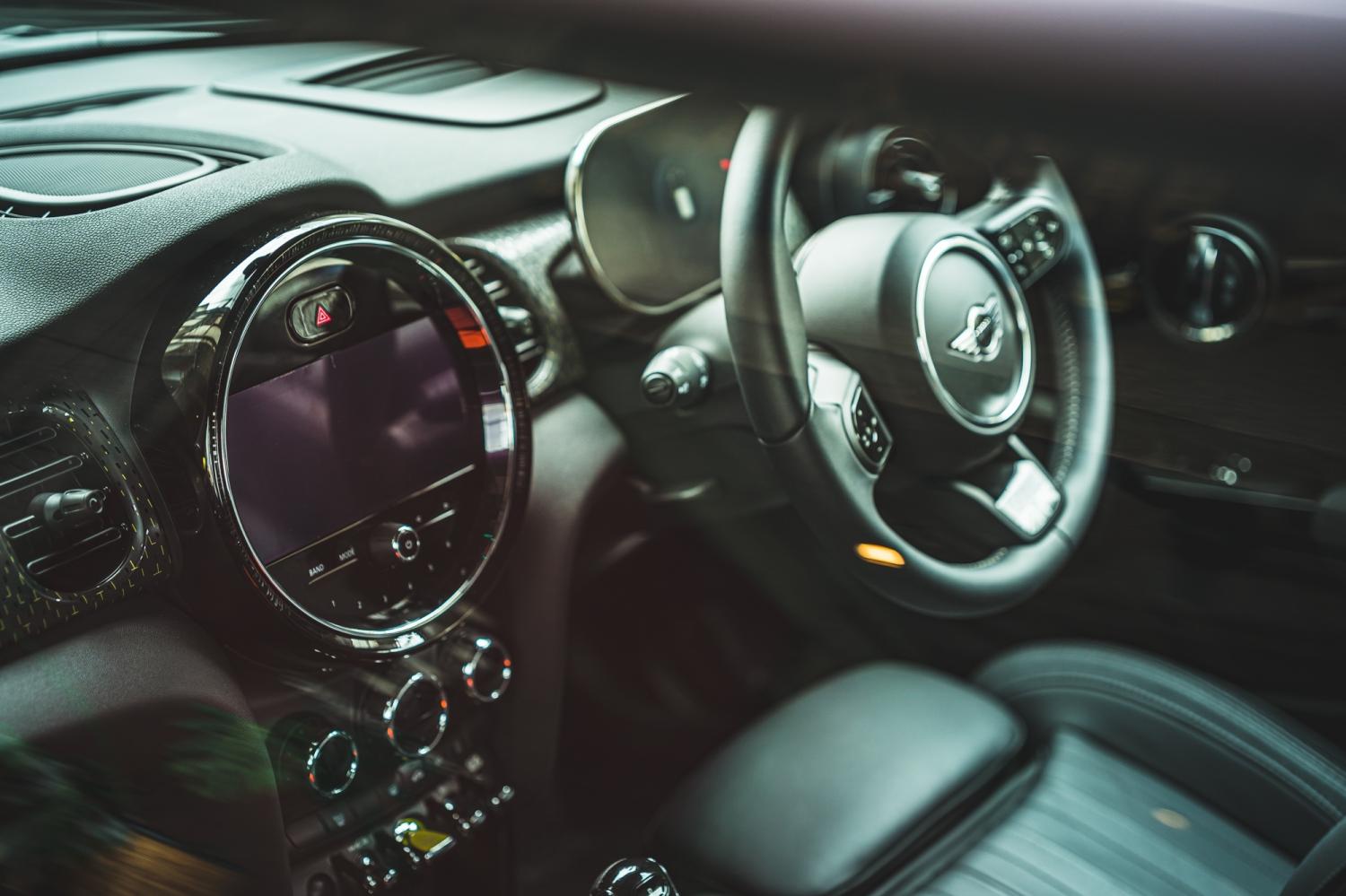 Before we get to the driving experience, let's look at the design and specifications.

Enigmatic Black is a very special colour. This black is mixed with a dark blue and when the sunlight hits it, there's a lovely two-tone effect. The signature lime green side mirrors and S on the nose, along with the mag wheels, create a strong electric Mini identity. And I love the "less is more" ethos.

The full LED tail lights with their Union Jack design and turning signal in the middle are very neat. The oval LED headlights with daylight running ring and turning signal are also a great design touch. The high beams hide in the centre and with the lights on, the whole look is very handsome. 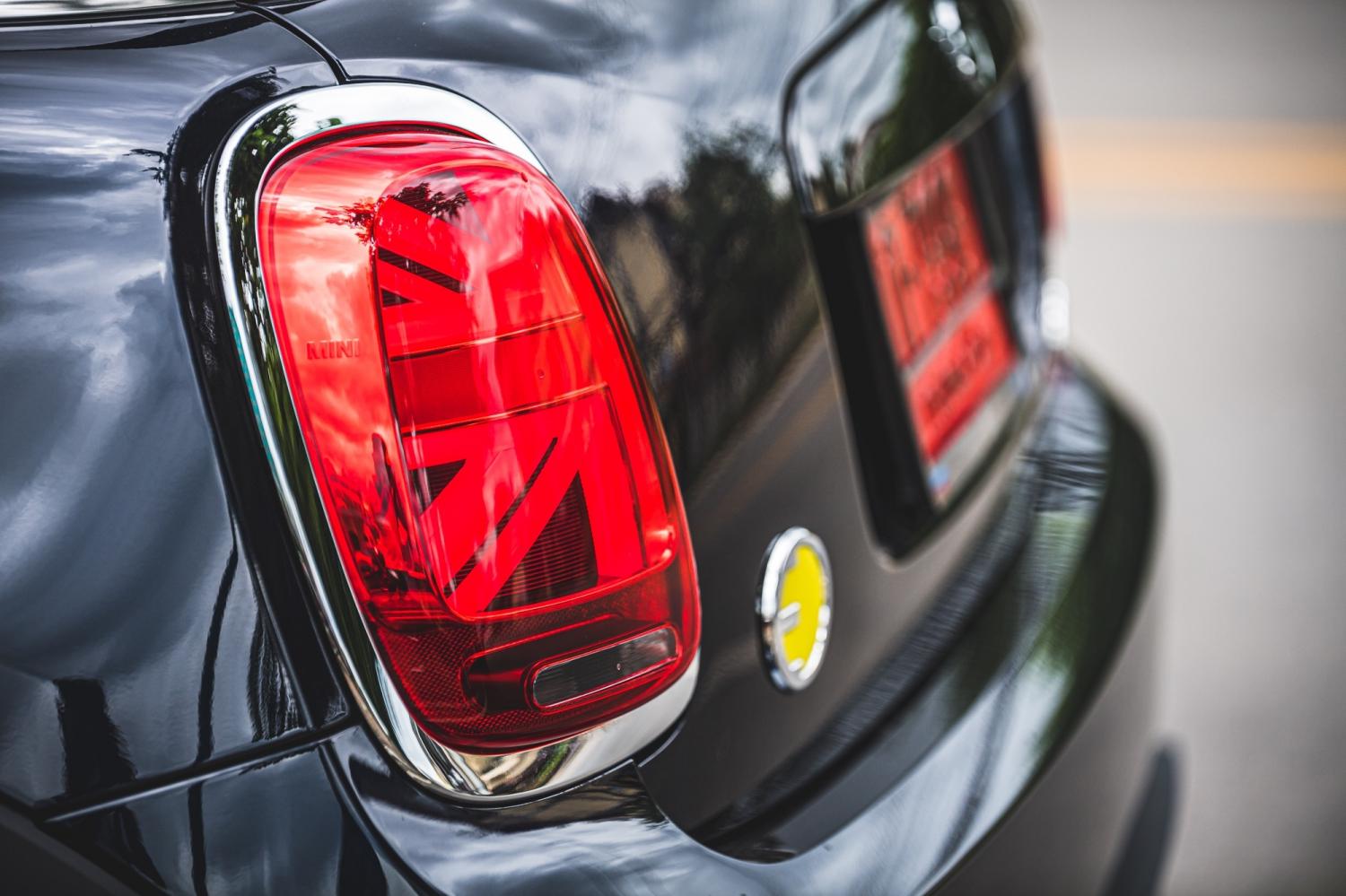 With 184hp you get a 7.5sec run to 100kph and 180kph top speed. Not bad at all for a 100% electric car. Mini claims the power is similar to the ICE Cooper, the petrol entry model. It may not match the Cooper S, but the signature go-kart feeling and levels of fun are still there.

The app is available for iOS and Android, but Apple users will have more advantages thanks to extra functionality. While Android users don't have as many functions, they should still be happy. The app lets you check battery levels while charging in public, allows you to lock or unlock the doors, and also check service records and set up appointments. The coolest thing for a hot country like Thailand is the ability to turn on the AC before getting in. No more hot seats!

All the interior components are great, with buttons and control units offering a rocket-ship feel. The ambient LED lighting with changeable colour schemes makes driving at night cool, and the Harman Kardon music system is high quality. 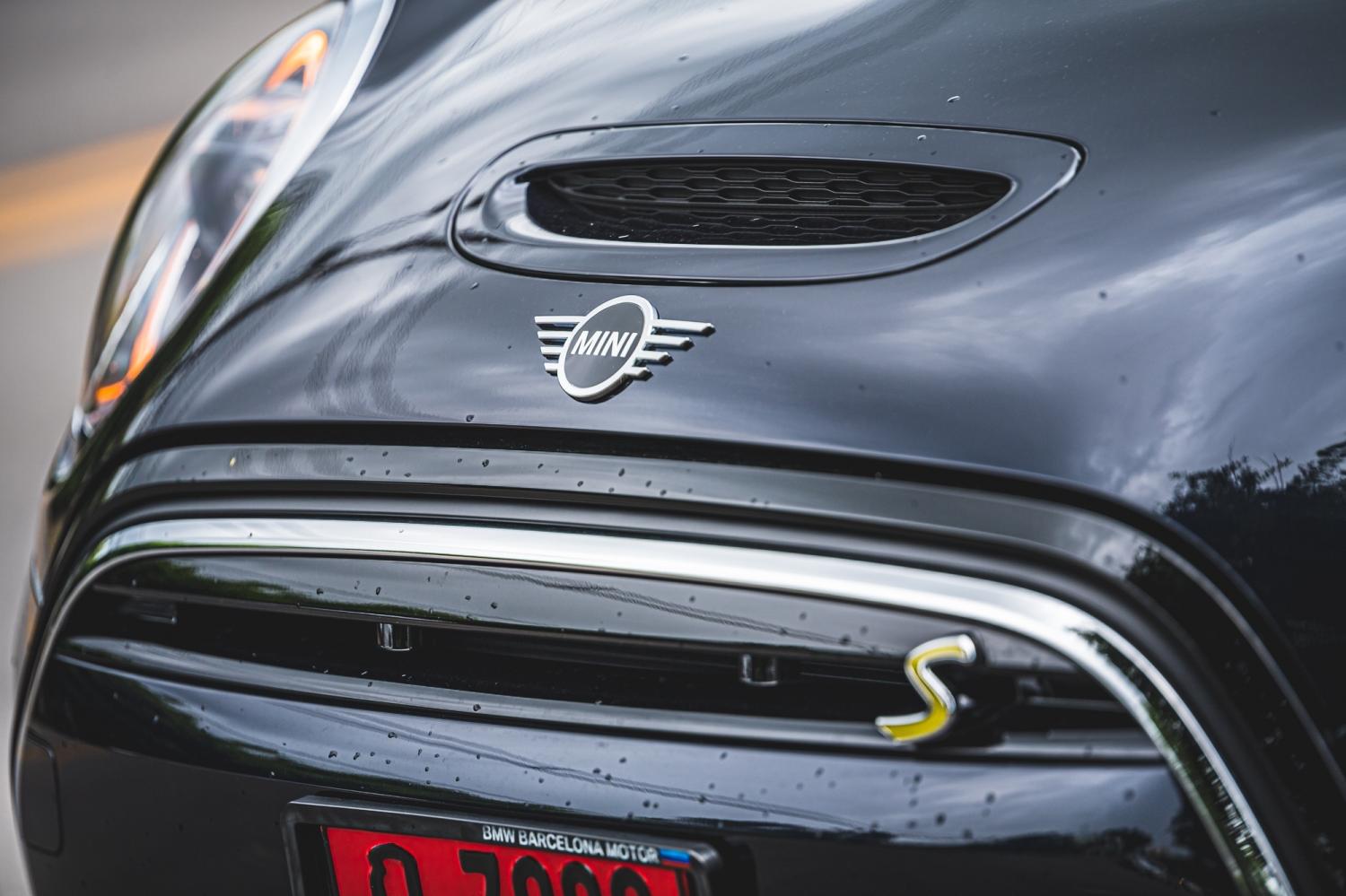 Minimalist front design and lime green letter S. Within a second you know this is 100% from Mini.

Mini claims a 180km-200km range on a full charge but that depends on how you drive. We took the Cooper SE from downtown Chiang Mai up steep hills and around countless bends for a nice cup of coffee at Thep Sadej Coffee plantation, some 50km away. That's a 100km round trip to start the day. Back in town, we had 40% battery left and still needed to do a photo session up Doi Suthep. We used a further 25% getting to the top of the mountain and had just 15% battery left for the 20km downhill drive into town. But because of the "one-pedal" ability to slow the car, we got the battery back to 65% through kinetic energy regeneration.

There are four modes -- Sport, Mid, Green and Green+. As you might think, Sport offers max power and fun but runs the battery down in quick time. Mid is still fast, but not furious. You'll have enough power to pass other vehicles. Green offers a smooth drive. It consumes less battery power but still lets you hit 90kph. Green+ is for when you really need to conserve all the battery power. Air conditioning will be shut off automatically and you will gain more range, but top speed is limited to 55kph. 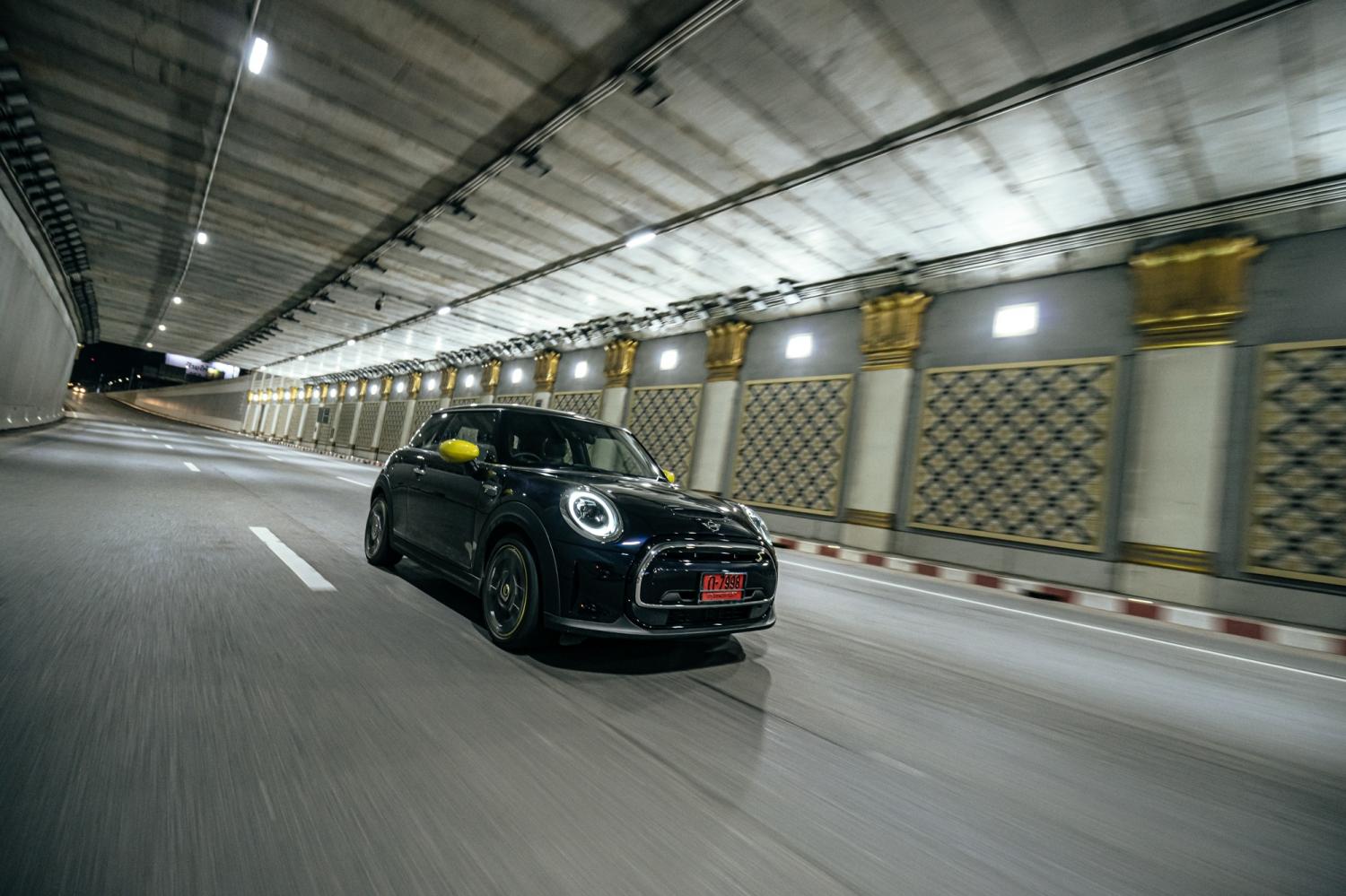 That Mini go-kart feel is still there, despite the suspension set-up being a little higher than the ICE Mini. It brings greater comfort, but when you want to drive aggressively it may feel a little too soft. Remember, this is not a car for boy racers.

Luggage space is the same as other F56s. The designers packed the battery quite well underneath the chassis. With the rear seats folded, there's plenty of space available.

Offering good amounts of power and torque, the battery does not fade as it runs down. The one-pedal-braking regen system is particularly good.

These are 10 things we love about the Mini Cooper SE, but is it an EV that suits your lifestyle?

I didn't want to drive the Mini to grab a cup of coffee. I wanted to take it through the mountains and live with it for a day to see if now really is the time to go fully electric.

I mean, Mini claims a 200km range but I don't believe that. Why? Because I am not going to drive at 50kph all day. No way.

And then there's the all-important question. Does it still feel like a Mini?

After being on the highway for a while, the Cooper SE answered my question. It still has that Mini DNA, the go-kart feeling is still there, but the handling is friendlier. Entering a forest zone with a narrow, two-way road and endless corners, the fun really began. Even though the Cooper SE rides a little higher, it did well during cornering.

When the one-pedal engine braking was regenerating the battery, things did feel a little strange, especially when I was getting used to it. But after a while everything was smooth and I was also saving the brake pads.

Reaching 170kph is not too bad for an electric car, and the hefty torque means the Cooper SE passes other vehicles comfortably.

From Sport mode, I changed to Mid when reaching a narrow road with a 50kph speed limit. In this setting, the battery offered too much power to corner safely.

Green mode was perfect on this road. You can save the battery and the AC is still nice and cold. Also, the driving pleasure remains at 100%.

Rushing back to the city, we had 40% of battery left and we still had to climb Doi Suthep. This was all about battery management, so it was time for Green+. After finishing the photoshoot, we had 28% left.

Thanks to the battery regeneration system, the downhill run got the battery back to 60%. More than enough to head out on a date.