New-gen Honda Civics are all grown up now

The Honda Civic -- first introduced as an economical three-door hatchback -- which was popular among college students in the 1970s has evolved over the years.

Today, the Civic is considered a premium Japanese compact sedan aimed at buyers looking for luxury and technology.

Earlier this year, Thailand became the first country outside the North American region to get the latest Civic, reflecting its popularity in the Thai market. 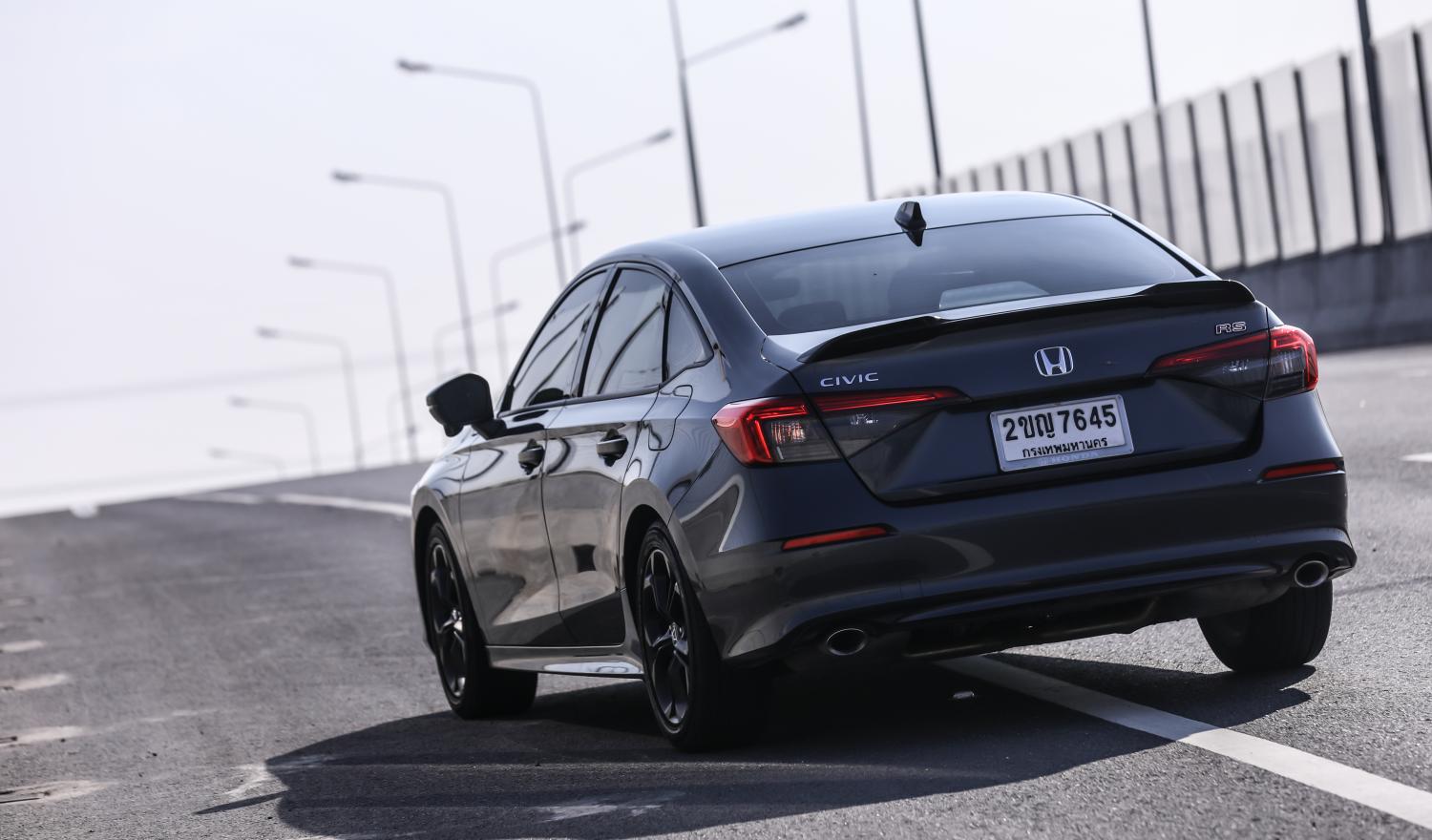 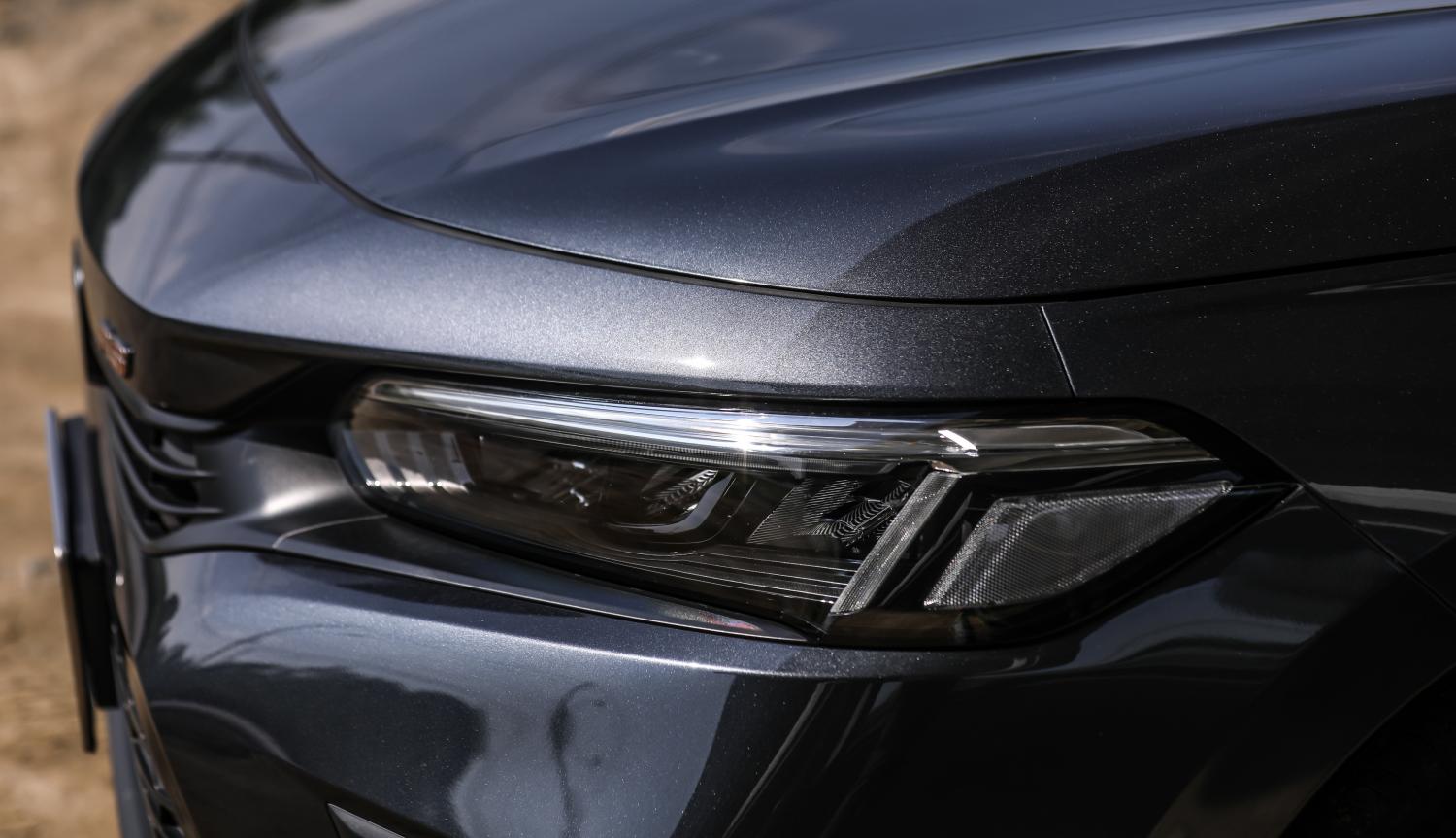 While the 10th-generation Civic had looks that must have surely been inspired by Japanese manga comics, the 11th generation leans on elegance rather than intimidating looks. In fact, it resembles the larger Accord, particularly the front end and C-pillar area.

The headlights, daytime lights, fog lights as well as tail lights in the RS we drove were all LEDs (lower trims gets halogen headlights). The RS also gets glossy black accents around the exterior (including a small rear spoiler and shark fin radio antenna), black 17-inch alloy wheels and dual exhaust with chrome finish.

Many were amazed by the tail light design of the 10th-generation Civic that resembled the letter "C" when illuminated while the rest of the rear end looked as if it was taken from a spacecraft. Unfortunately, nothing like that exists in the new Civic. The tail lights look boring, like something you'd expect on a Toyota Corolla. Nevertheless, thumbs up for the RS twin exhausts, one for each side, which are genuine and not some sort of decoration as in many other brands in the market.

The new Civic is larger than its predecessor in every dimension and boasts a 420 litre luggage area. The RS also features sporty front seats (with suede and red stitching) and rear passengers get decent legroom, although there's not much headroom if you're taller than 1.8m.

At this price point, you might expect air vents for the rear passengers or foldable rear seat backrests but they aren't included. Perhaps it is something Honda can work out for the mid-life model.

The multi-function steering wheel comes with leather upholstery and a piano black finish. Contributing to a good seating position is the 4-way steering adjustment offered across all three trim levels.

One of the highlights of the new Civic is the honeycomb styling across the front console and hiding of the air vents, which looks fascinating, but you might start to wonder if cotton buds are needed to clean the numerous holes from time to time. The air vents, meanwhile, come with a joystick which makes it easy to adjust the air direction.

The interior is of decent quality in terms of material and looks clean-cut, but there is still a good amount of hollow plastics around the lower part of the cabin.

The control dials for the air-conditioning system look and feel good too, clicking as you turn them. Below them are two USB-A ports (with two more at the rear) and a 12V outlet, as well as a wireless charging pad. In general, the controls in the new Civic are nicely laid out and easy to use.

Being the top version means the RS also gets all the high-tech features such as a smart key system with a smart keycard, remote engine start, 10.2-inch TFT instrument panel, 9-inch touchscreen (with multi-angle rearview camera), Honda CONNECT and wireless charger as well as automatic air-conditioning. 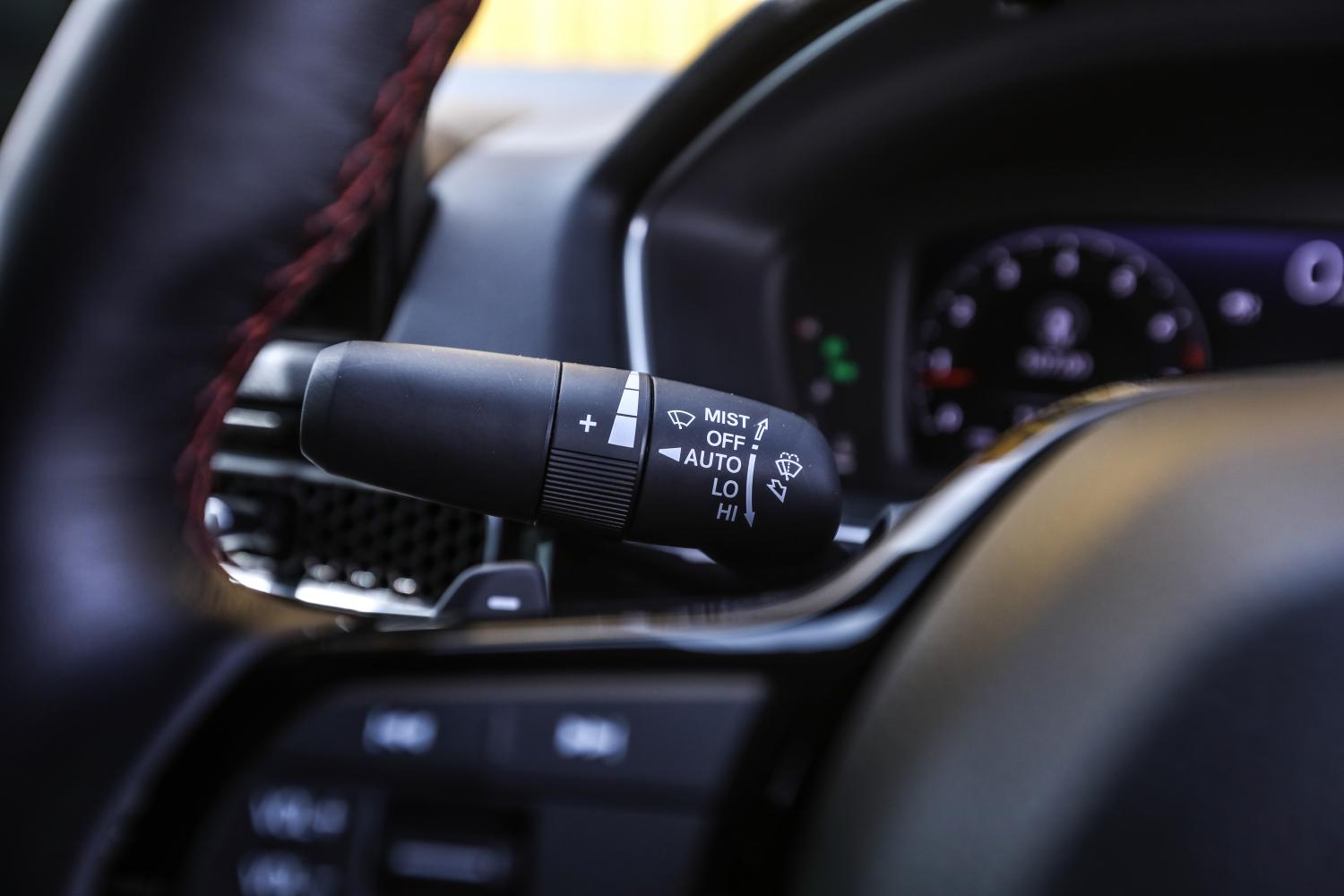 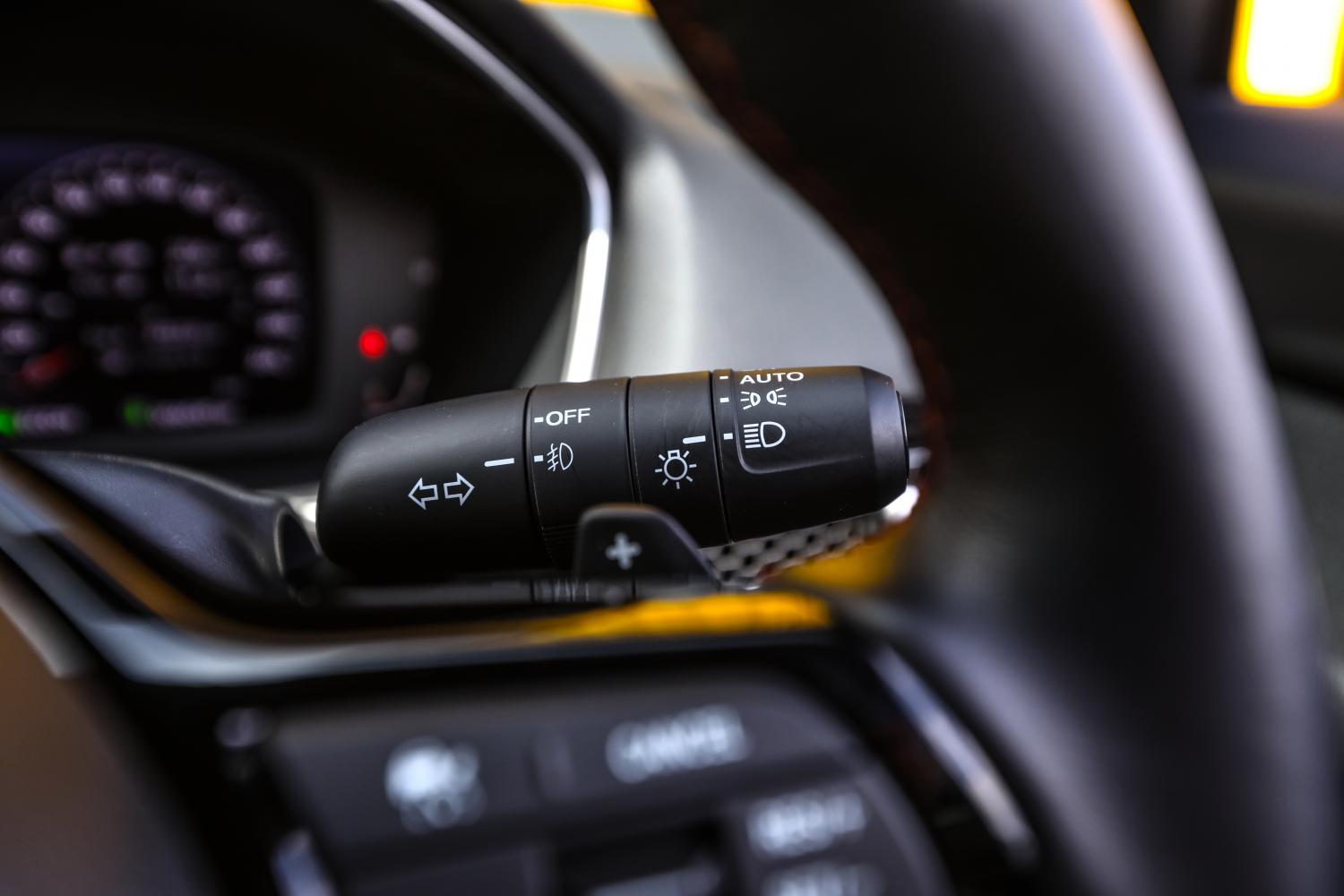 Honda is the only manufacturer in this segment to offer LaneWatch, a system that features a video camera embedded in the left side mirror. Whenever the left turning signal is engaged in the Civic RS, live video images are displayed on its centre screen.

Honda engineers developing the new Civic wanted to achieve better performance and handling, and it appears the team has done well.

Compared to the 10th-generation Civic, powered by a similar 1.5-litre turbocharged engine, the maximum output has increased by 5hp while maximum torque is up by 20Nm, while average fuel economy is 17.2kpl.

The E85-compatible 1.5-litre turbocharged VTEC engine in the new Civic RS may sound pretty dull as it revs, but it does deliver in terms of output, pumping out a healthy 178hp and 240Nm (right from 1,700rpm all the way to 4,500rpm). Power goes through a CVT (Continuously-Variable Transmission) to the front wheels.

While the CVT helps provide good fuel economy it also helps with acceleration. Honda Thailand did not provide official 0-100kph figures but real-world tests showed times considerably lower than 8sec, with a top speed of over 200kph. 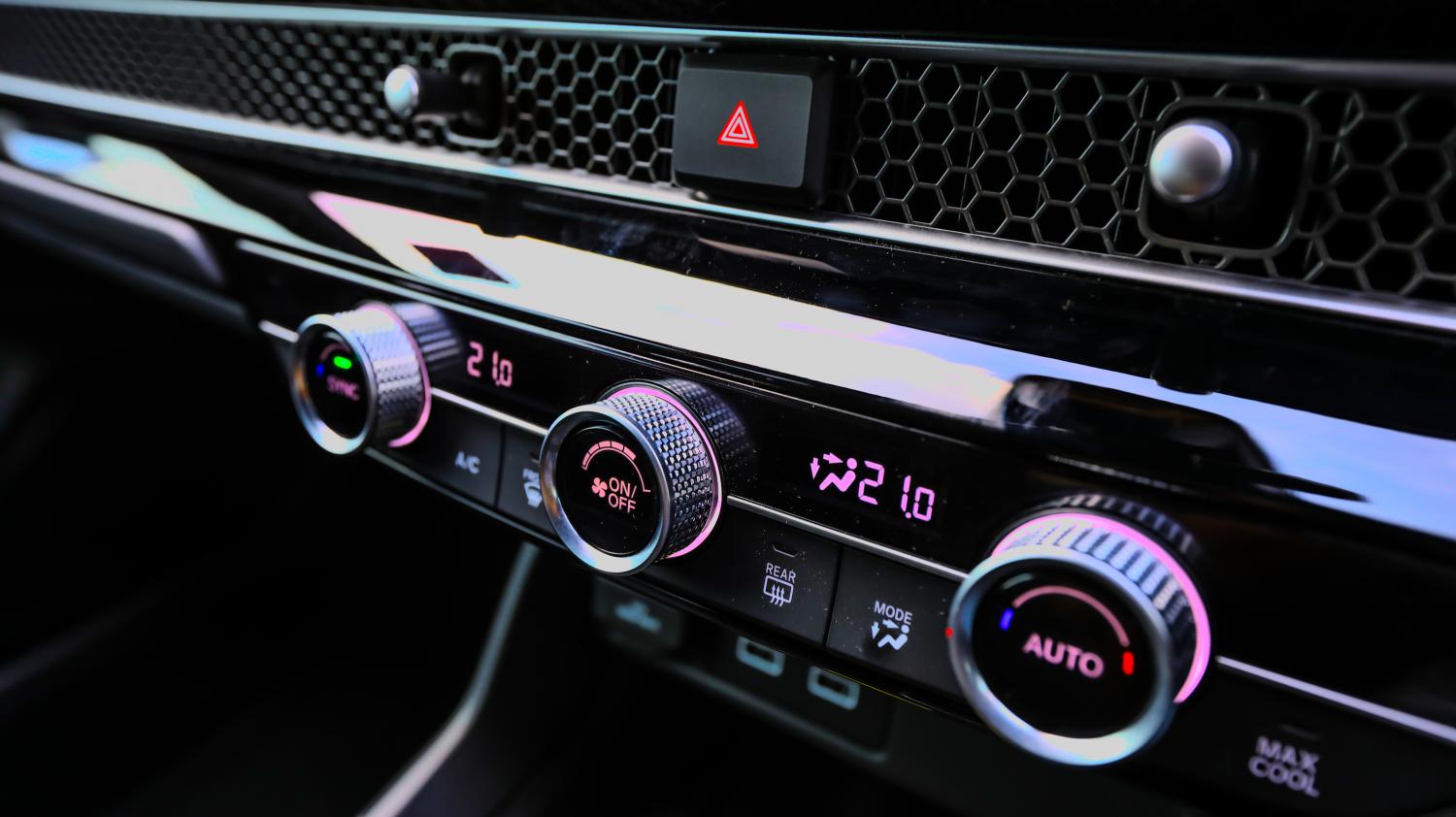 The Civic RS may not qualify as a fire-breathing sports sedan, but it didn't prevent us from taking it to the racing circuit (where it's safe to push it to the limits).

Thailand Circuit Motorsport Complex is a 2.5km track located in Nakhon Pathom designed for motorbikes, but its winding course is also good for testing car handling, offering all sorts of corners for visitors to try out.

Our Civic RS test car was fitted with 215/50 Yokohama Advan Decibel tyres which, as the name suggests, offer low noise, but one can't help wonder about the grip. Nevertheless, the Civic RS held on to corners well and not once did it lose its composure around the winding Thailand Circuit track.

Both the front strut and rear multi-link suspension feature stabilisers, while the longer wheelbase (2,733mm vs 2,698mm) and wider rear track (1,563mm vs 1,587mm) provide improved stability over the outgoing model.

The turbocharged engine revs happily when pushed, although the acceleration is pretty linear and nothing spectacular. The CVT surprisingly offers a good driving experience, allowing high-rev downshifts via paddles on the steering wheel as the car approached a low-speed corner.

Driving the Civic RS around the track is easy as long as you don't overdo it. The suspension is balanced while the steering has a good feel despite a little slack in the middle.

There are all-around disc brakes, and although the size of the discs isn't going to impress anyone, the brakes do their job properly. There is a nice pedal feel, as well as enough stopping power at the end of Thailand Circuit's long straight, which prepares you for a tight second-gear corner.

Although the Civic is closer to European cars in terms of ride quality and steering feel, it still lags when the going gets tough. The ride is smooth and refined when cruising on the highway, but on the other hand, the Civic can also succumb to potholes on poorly-maintained roads.

While providing buyers with satisfying performance and handling, the new Civic also offers matured styling and a streamlined interior, plus a nice package of innovative features. Unfortunately, lacks key features that would complete the package.

The new Civic is in fact a grown-up version of the car it replaces, with the purpose of successfully continuing the class-leading position in the compact car market that previous Civic models have established.