After introducing the 11th-generation Civic 1.5 Turbo in Thailand in August last year, Honda has followed up with the range-topping hybrid version, coinciding with the 50th anniversary of the model.

The Civic e:HEV made its maiden appearance at this year's Bangkok International Motor Show in March, but official pricing of the new variant was only announced in June. 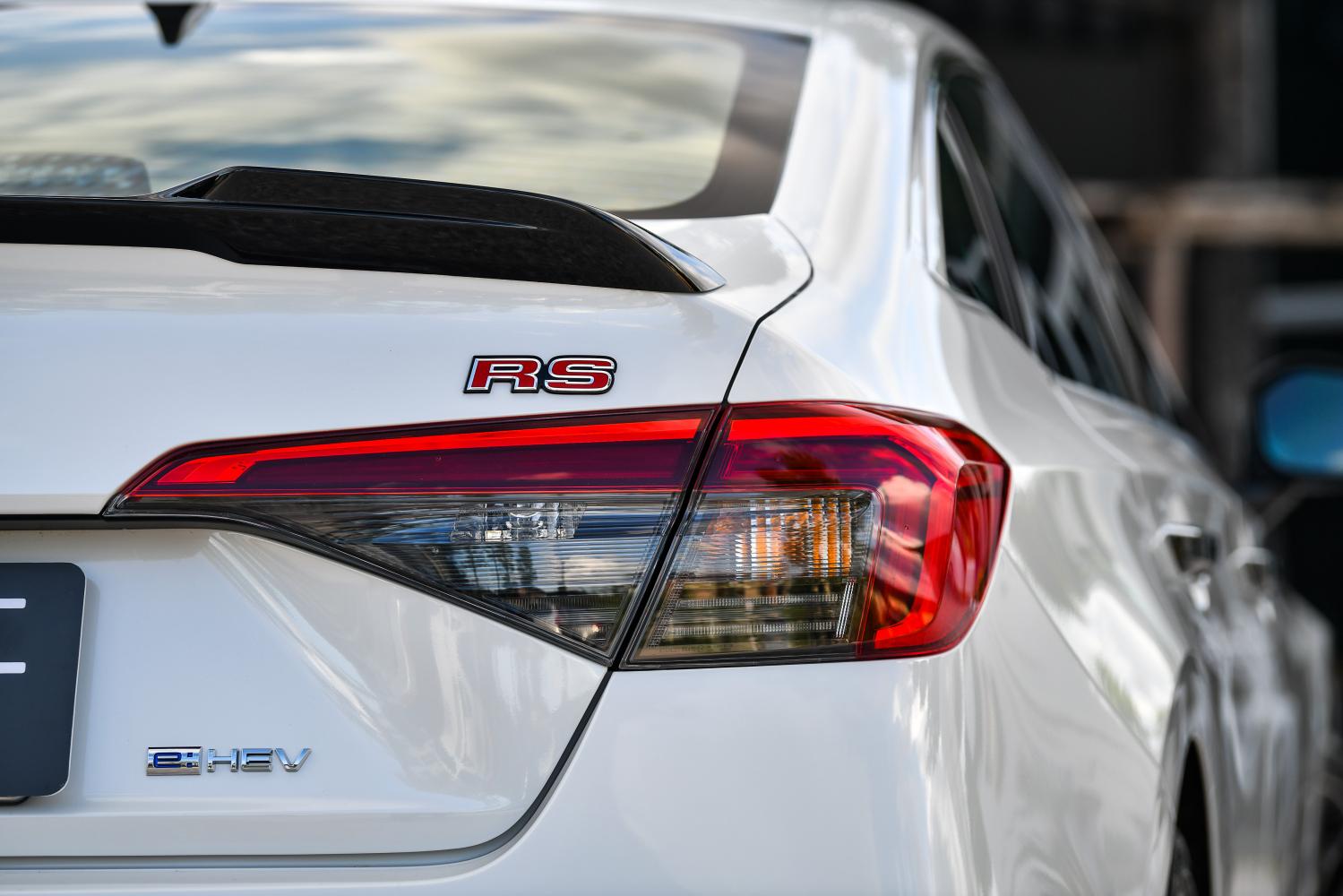 There are two hybrid models -- the EL+ priced at 1.129 million baht and the RS priced at 1.259 million baht. Meanwhile, the RS trim previously offered for the 1.5 Turbo model has been discontinued, resulting in just the EL and EL+ trims being available.

While the previous generation Civic came in both saloon and hatchback bodystyles, Honda decided to market only the saloon in Thailand for the new model, while the hatchback sibling is offered in other markets including Japan and Europe, where it is offered as a hybrid-only model.

Honda says that the development goal of the Civic hybrid included strong performance and efficiency, as well as improved levels of interior comfort, visual appeal and overall usability.

The 11th-gen Civic is larger than its predecessor and adopts a lower and wider stance, although there are smooth, clean lines that give it a more mature appearance compared to the previous model.

And while the Civic hybrid shares the same design as the 1.5 Turbo, there are small differences both outside and inside.

Being a hybrid model, the Honda "H-Mark" logos on the radiator grille and boot lid come with blue inlays, and there's chrome garnish across the front grille as well as on the upper door frames. Front and rear bumper styling are also exclusive for the hybrid.

The EL+ gets chrome door handles as well, while the RS also comes with glossy black exterior packaging -- door handles (with chrome trim), front spoiler lip, mirror caps, sharkfin antenna and rear spoiler. The RS also gets larger 18in two-tone alloy wheels compared to 17in rims offered in the EL+. 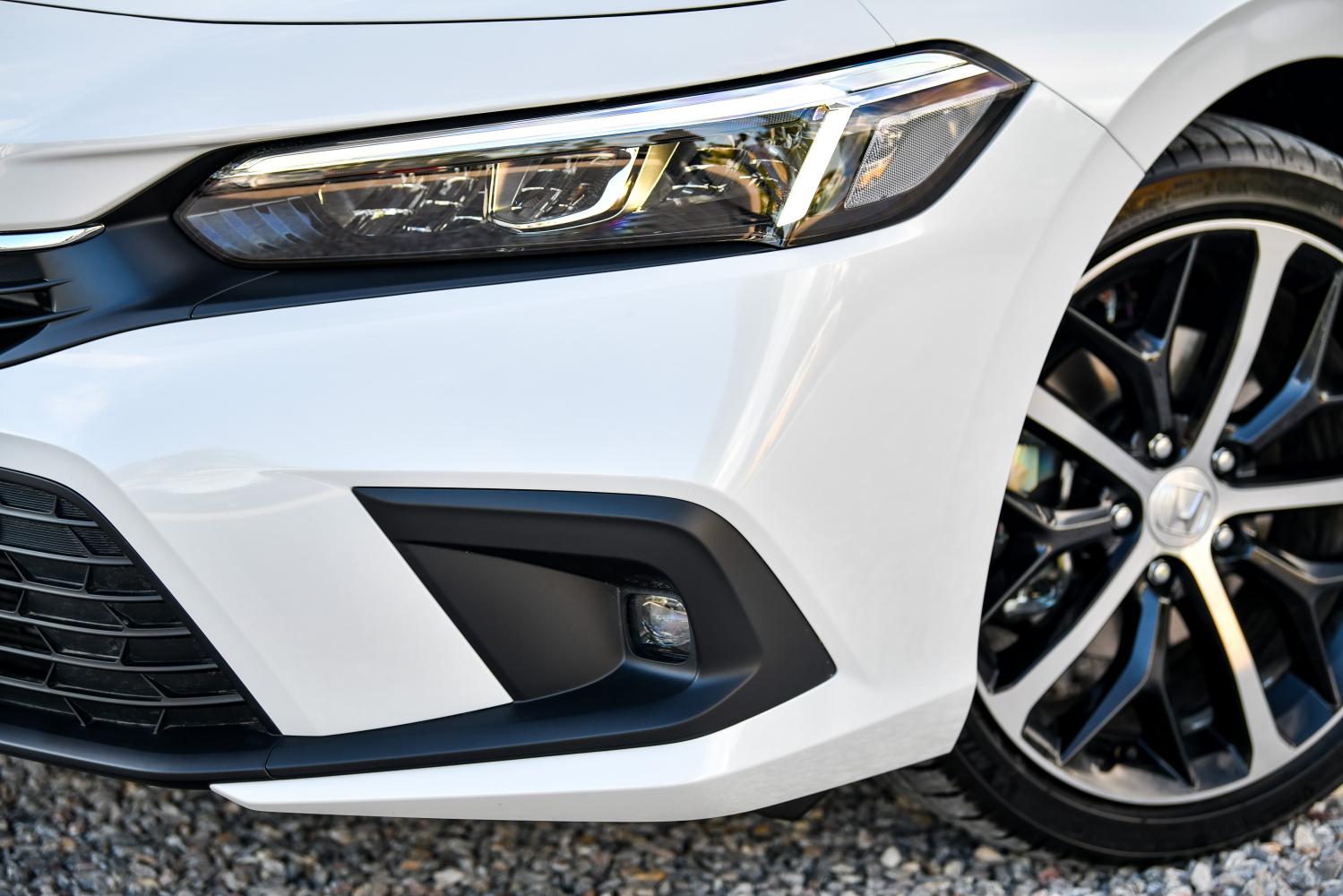 The RS also gets upgraded interior features, including 60/40 split-folding rear seat backrests, two rear USB ports and rear air vents (which were not offered in the 1.5 Turbo RS).

The 10.2-inch TFT display is exclusive to the RS (the EL+ gets a smaller 7-inch TFT screen) but both do get a 9-inch centre touchscreen with Apple CarPlay/Android Auto. Other goodies offered in the RS include wireless phone charger, dual-zone climate control, Honda Connect plus navigation system.

While there isn't a head-up display, the 10.2-inch screen does provide loads of information and menus including driving directions for the navigation system (in addition to the centre screen), EV status and intelligent safety features. There's no rev counter as it's been replaced by a power meter.

The upholstery consists of a mix of leather and high-grade synthetic materials plus red stitching, giving the cabin a premium appearance and feel. The leather-wrapped steering wheel feels nice while multi-function controls are easy to use. The steering is adjustable for both reach and rake.

Both front seats feature large side bolsters and are electrically powered in the RS (8-way for driver and 4-way for passenger), while seat upholstery is a combination of PVC and perforated suede. Rear seats also come with a nice centre armrest with cupholders. To fold the backrests, you need to remove the centre shoulder belt from the guide, access the luggage compartment and pull the release lever.

The centre console design of the Civic is pretty unique with the honeycomb air vents while the glossy black interior decorations come courtesy of the RS trim. Control knobs for the climate control system look and feel good, although there's not much space in the glovebox or centre armrest storage box (with a small tray that can be securely locked in two locations).

There are two USB ports (covers would be appreciated) and a 12V outlet for the front, as well as two cupholders beside the gear lever and bottle holders on the door panels.

The Civic hybrid also comes with advanced features like Active Noise Control (that works like a noise-cancelling headphone). It uses a front ceiling-mounted microphone and a rear tray microphone to detect any "booming" sound in the cabin associated with cylinder deactivation. It then emits a mirror "anti-noise" signal through the audio system's speakers, which effectively cancels those booming sounds and creates a quieter passenger compartment. Honda says it is always working, even when the audio system is turned off.

Meanwhile, there is also Active Sound Control that retunes and magnifies the engine sound through the loudspeaker for a more engaging driving experience.

When driving in EV mode, there is also an acoustic alert system for pedestrians (a soft engine cover also contributes to lower injury risks if they get hit by the Civic hybrid). 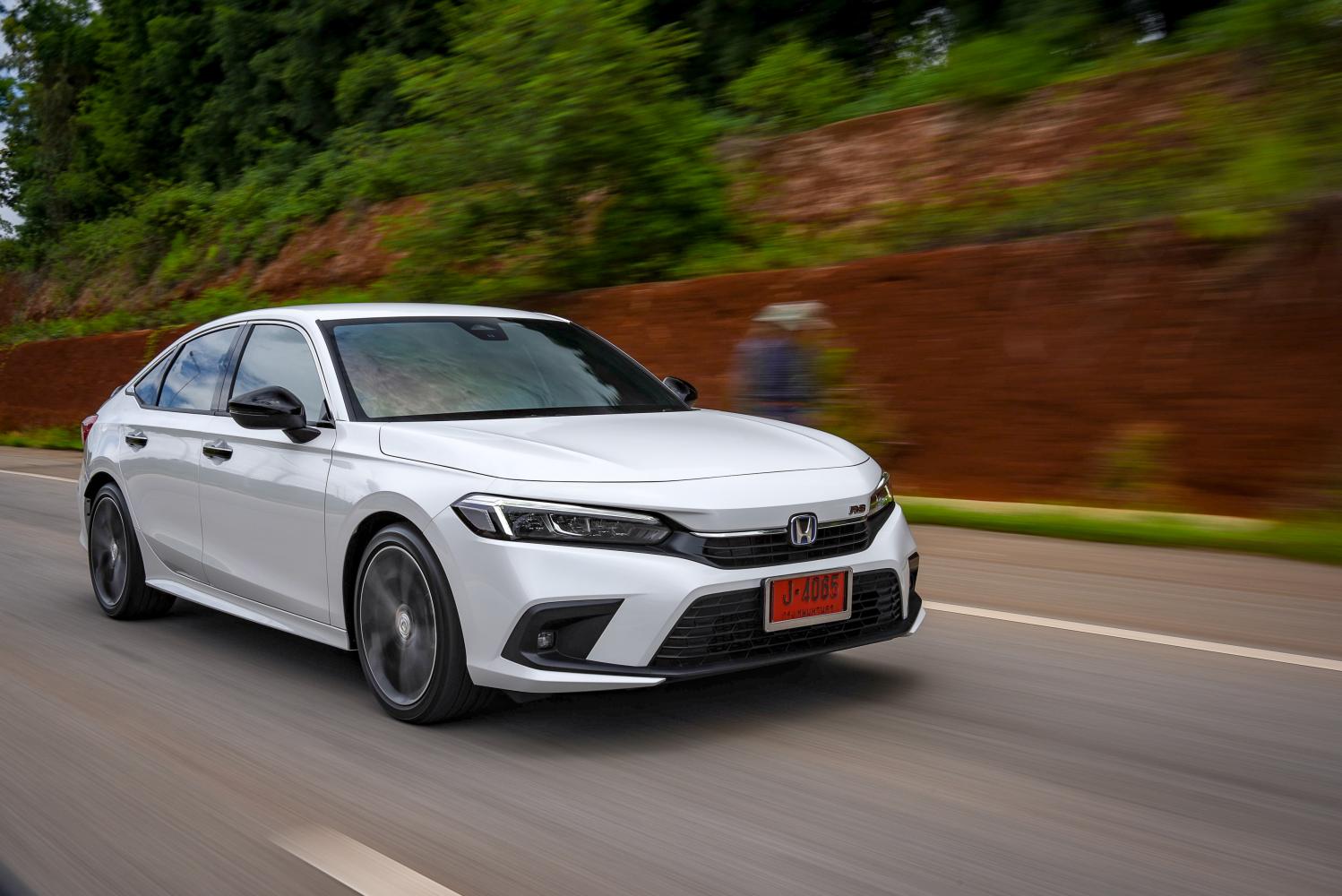 The system works like a series hybrid most of the time, using the engine to drive the generator, although during constant highway speeds the engine can also be used to propel the car. All this, including the EV mode (there's no EV button though), is managed by an intelligent power control unit. A small lithium-ion battery provides short EV drives whenever it sees fit, for example when driving at low speeds. The paddles on the steering wheel aren't for shifting gears, but for adjusting the level of energy regeneration while decelerating.

Economy, normal and sport modes, however, can be manually selected by the driver. Apart from driving characteristics, in sport the active sound management also kicks in to deliver a synthesised sport engine note.

Acceleration from 0-100kph takes a little over 7secs and the top speed is claimed at 180kph, while average fuel economy is claimed at 25kpl with 96g/km of CO2 emission.

The hybrid is 100-110kg heavier than the 1.5 Turbo, but according to Honda, has a lower centre of gravity due to clever placement of hybrid components, and the springs and dampers are 10% stiffer.

While the electric power steering assistance might feel inadequate especially for lady drivers, it has been well-calibrated in terms of precision and responds like those generally found in European cars.

The dampers soak up road vibrations well, offering occupants a high comfort level. But although the Civic feels closer to a European car in terms of ride comfort, it doesn't handle deep potholes and sharp speedbumps as well.

Brakes are discs all-round and while Honda engineers say there is no energy regenerative system, the pedal feels heavy and dull, requiring more foot pressure than usual.

Honda has made sure its latest hybrid meets high customer expectations with its luxury, powerful drivetrain and lots of advanced features, but it comes at a premium price. 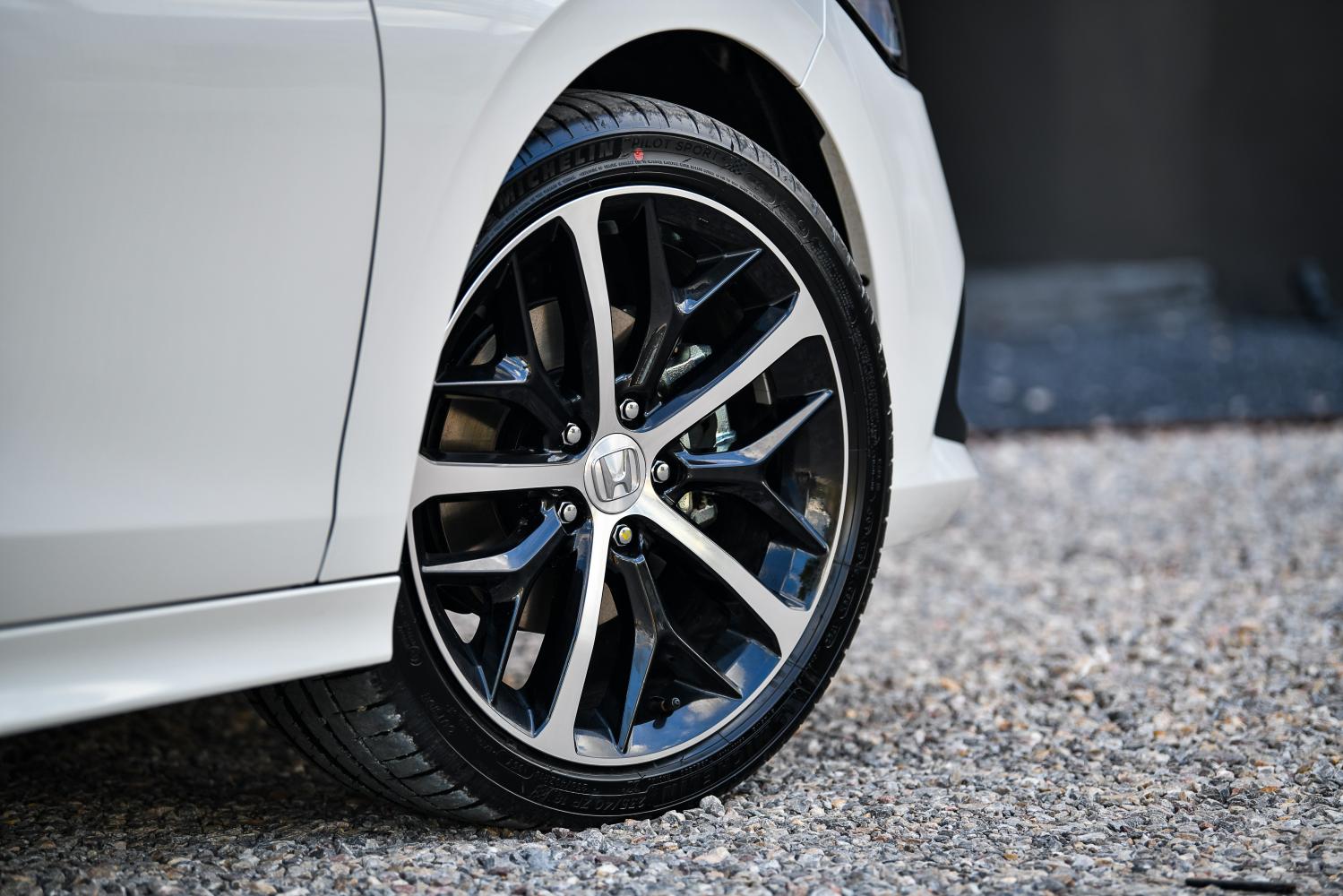 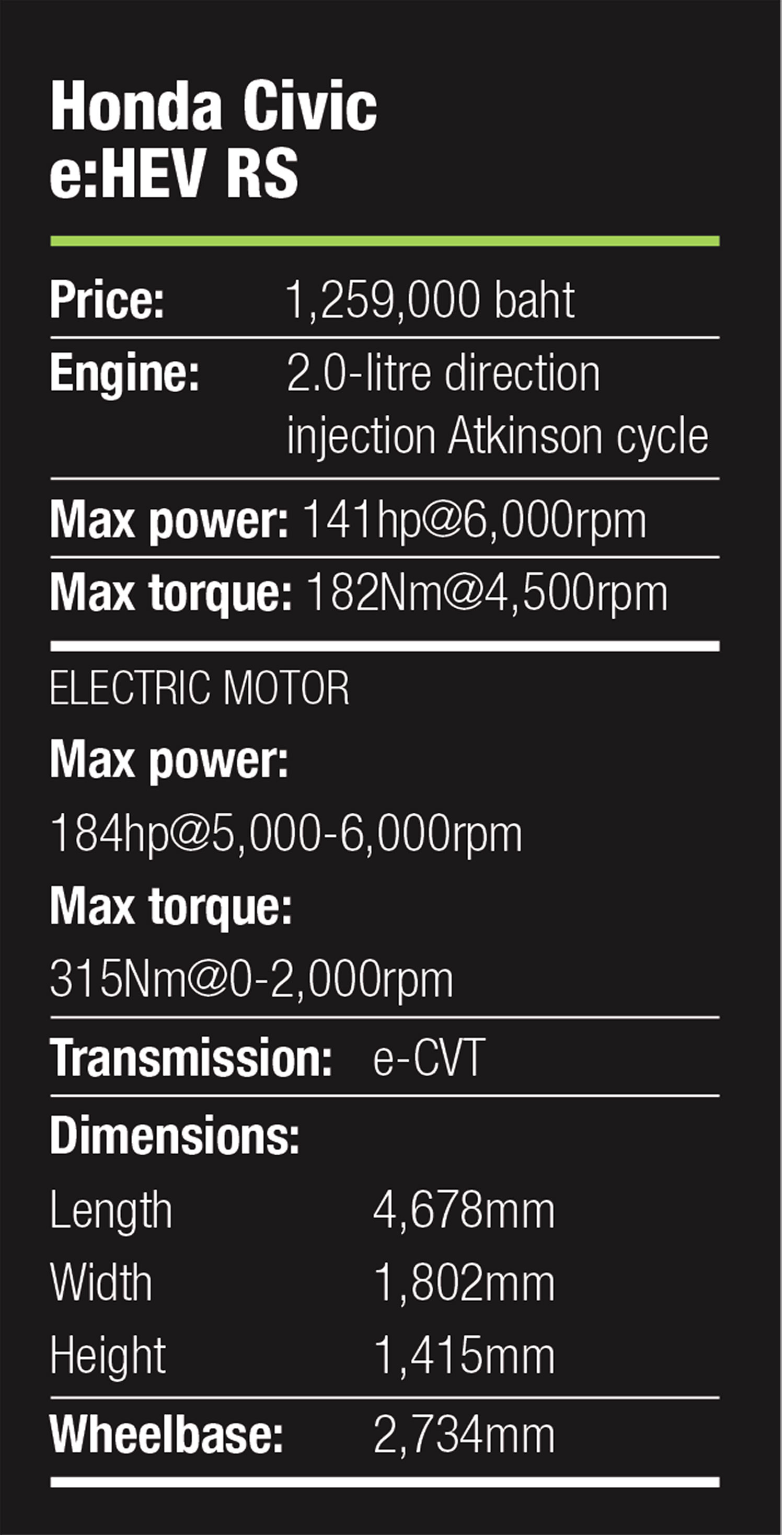