BMW M, or to give its full official name, BMW M GMBH, the specialist tuning arm of BMW, started out with just a handful of enthusiastic employees who happened to know a thing or two about getting the most out of a BMW. Responsible for creating some of the world's most sought-after performance cars, BMW M was originally set up in the early 70s to facilitate BMW's motorsport programme. It has since gone on to produce BMW M cars for the road, which sit at the top of the range as high-performance models. Discover our comprehensive timeline of M car history below.

BMW M ensured BMW dominated various European touring car championships in the 70s, winning multiple titles, along with taking a notable victory at the infamous 6 Hours of Nürburgring in 1973. This was all thanks to the first car developed by BMW M -- the legendary 3.0 CSL, aka The Batmobile, a nickname adopted thanks to the car's striking aerodynamic styling.

The very first BMW road car to be blessed with the now-iconic M badge was in fact a supercar, ingeniously named the M1. Launched in 1978, the M1 is still the only mid-engined M car.

After the M1 supercar, a luxury saloon was the perfect foundation, and so BMW M set to work on the E12 5 Series.

The E24 6 Series may have been born in the late 70s, but BMW M created the M635 CSI in the early 80s. North American- and Japanese-spec cars were simply badged M6. It took just over 6secs to reach 100kph thanks to a 3.5-litre straight-six lifted from the M1. GT coupe styling and the iconic sharknose front end ensure this M6 is undoubtedly one of the prettiest M cars ever produced.

Queen at Live Aid, Michael J. Fox and Christopher Lloyd in Back To The Future, and who can forget, BMW launched the first M5, the birth of the legendary super saloon.

This performance icon was born in the 80s and is undoubtedly one of the greatest names in performance car history. And it all started with this iconic, boxy, wide-arched German perfection known as the E30 M3.

The E34 demonstrated build quality and attention to detail. It just looked so right, if a bit sinister, again adding to its overall appeal. BMW individual colours of a purple nature, such as Daytona Violet and Techno Violet, make this era of BMW even more alluring. 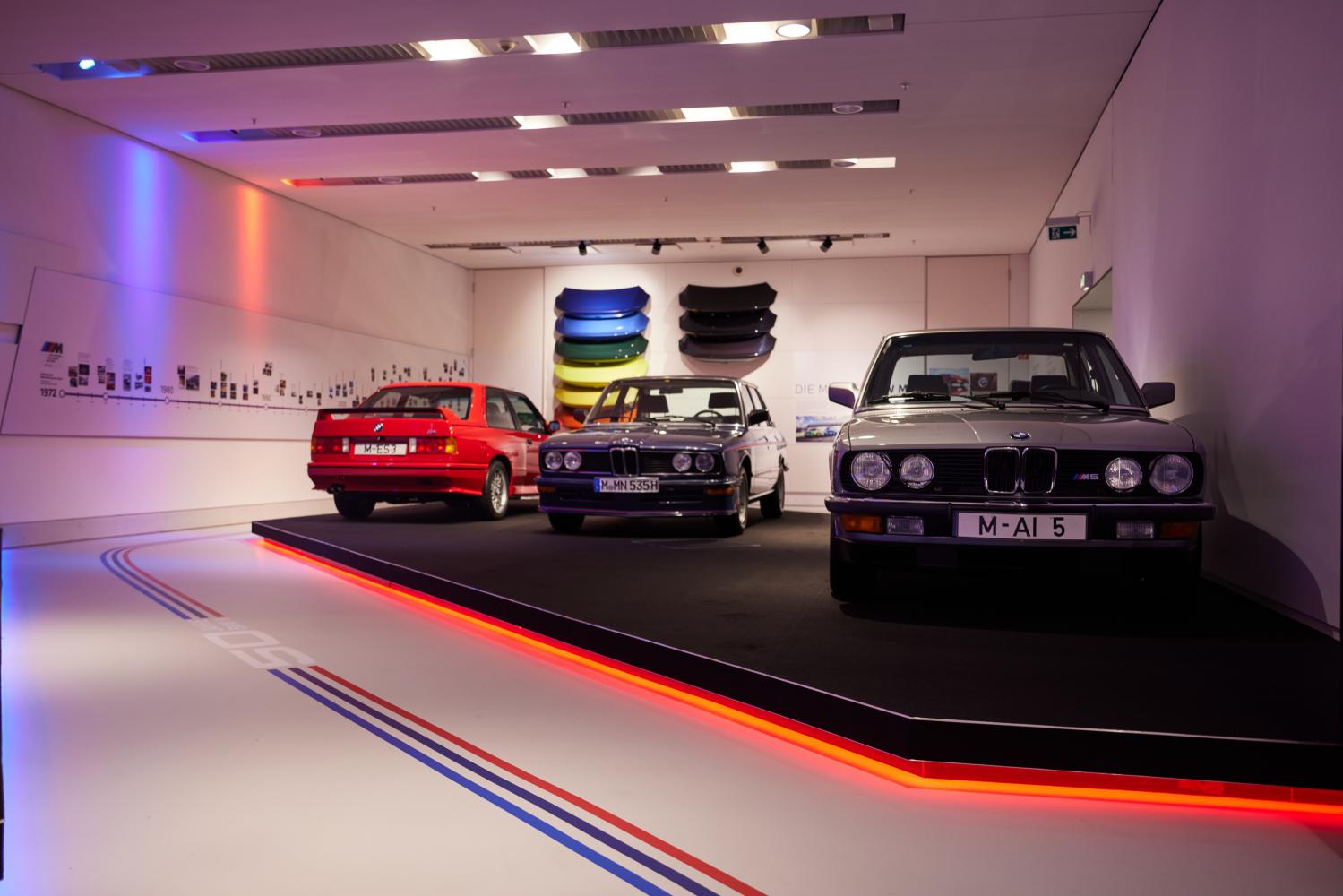 Unlike its predecessor, the E36 M3 wasn't built for homologation reasons, but being a full-on M car it certainly had motorsport heritage and flair, being the first M3 with a 6-cylinder engine.

The shape is like nothing else. Ultra-sleek, ultra-smooth and fitted with a glorious V12 engine, this 8 Series M car had all the right ingredients. It was more of a grand tourer with a monstrous engine that was ideal for long journeys.

The BMW Z3 was not particularly fast, despite its sports car roadster looks. BMW M, therefore, decided to give the Z3 the power it deserved and with 321bhp, the Z3 M roadster was born.

This was perhaps the turning point for the M5. It had been given a proper monstrous engine that turned out to be a mere foundation of what was next in the M5 pipeline.

The E46's 3.2-litre straight-six 338bhp naturally aspirated heart howls in such a distinct way that this particular engine is still looked back at fondly. The undeniable standout of the E46 M3 range was the CSL, build to provide an even purer experience. A hike in power enabled a sub-5secs 0-100kph sprint.

One of the ugliest and most annoying cars in the world, but at the touch of a button, it becomes one of the very best. It becomes an M5, making it a true supercar slayer.

BMW M division decided it was necessary in 2005 to make the E63 M6 another awesome creation from the M division. Today, turbocharging has been widely adopted.

When BMW launched the E85 Z4, it was first offered as a roadster (convertible), but then they released the coupe, which arguably looks even more stunning, especially with full-on M car treatment.

The fourth generation of the M3 had to grab attention, and it did so with a V8 engine at the heart of the mix. Available as a convertible (E93) along with the rare saloon (E90), but the coupe (E92) is the most popular choice.

BMW decided to give their M Power to some of its SUVs back in 2009. The BMW X5 was first up, and then its coupe equivalent, the X6. The X5 M and X6 M were born. Offering immense practicality as well as huge performance, these were not just some of the fastest SUVs out there, they were fast in general.

One of the first proper M cars to be turbocharged, the 335bhp 1M has become a properly sought-after M car, fetching more as a used example than it cost new. All this despite its somewhat backwards name, so that it didn't take the shine away from the original M1 supercar. As M cars go it's pretty rare too, with only 450 made. The short wheel base, manual transmission and pumped-up look have ensured the 1M will be one of the most sought-after M cars of recent times. Based on the 1 Series Coupe, this was the first "Baby M Car".

A controversial part of BMW M history, especially in the case of the super-saloon M5. With the previous E60 M5 featuring an incredible naturally-aspirated V10, the updated F10 M5 used a smaller 4.4-litre V8. In search of more efficiency, manufacturers had to reduce engine sizes and adopted turbo power. In this case, the F10 was fitted with two of them, so M enthusiasts needn't have worried, especially with 552bhp on tap -- over 50 more than the V10.

Need a less practical M5? The 2012 M6 is essentially just that. Therefore, you still get the same crazy power of over 550bhp, enough for 100kph in under 4secs. Not bad considering the weight of this luxury GT.

The first M3 to be available in four-door only after the introduction of the 4 Series. M3 power is no longer naturally-aspirated, and the F80 is turbocharged with 425bhp available for a 0-100kph time of 4.3secs.

The first M4 to appeal to those who were after a properly focused drivers' car. Rear-wheel drive and using the same 425bhp turbocharged lump as the M3, it is seriously fun to drive.

The M2 took on the role of the latest baby M car in 2016. Small cars with big power are always a hit, and this particular baby M had all the right ingredients. It is the best M car BMW has ever made.

Welcome to the ultra-powerful 592bhp BMW M5, a proper weapon. In a super-saloon body, 100kph is dealt with in just 3.4secs, a whole second quicker that the version it replaced. The M5 is still the king of saloons.

After the success of the X5 and X6 getting the M treatment, BMW gave the smaller SUVs the same level of attention. So 2019 saw BMW launch the X3 M Competition and the X4 M Competition to attract new buyers.

Brand-new M cars cause quite a stir. But when it is the first model of its kind, they tend to cause an even bigger one. The first official M8 Competition was released in 2020 bringing with it a 4.4-litre, twin-turbocharged engine making a massive 617bhp and hitting 100kph from a standstill in just over 3secs.

The sixth-generation M3 was unveiled, showcasing a bold new look. The iconic BMW kidney grilles have been increased in size -- a nod to vintage BMW models. The new-look has certainly got M car aficionados and petrolheads talking.

This new M4 Competition features the same huge 503bhp power from its twin-power turbo inline 6-cylinder petrol engine, along with the increased BMW kidney grilles for that bold new look. The digital interior and incredible seats ensure occupants will be in awe too.

Some 35 years after the debut of the first M3, BMW presents the latest generation of its high-performance automobiles in the premium mid-size segment -- the new M3 and M4, unequivocally performance-focused concepts. Tuning work was conducted alongside testing for the M4 GT3 racing car.

The BMW M 50 Jahre Edition is based on the current generation of the most successful model series in the history of BMW M. Worldwide, the model designations M3 and M4 are synonymous with high performance in the premium mid-range segment.