Stay in your lane
Auto
Review

Stay in your lane

Mazda's midlife update for the CX-8 crossover includes some significant safety upgrades along with adjusted trim levels for both the diesel and gasoline variants.

For the first time in Thailand, Mazda is providing the CX-8 (except the baseline 2.5 SP) with "radar cruise control", which automatically adjusts speeds and maintains a safe distance from the car ahead, while also coming to a complete stop and accelerating when necessary.

In this review we drive the 6-seat, three-row 2.5 SP Exclusive that comes with comfortable second-row captain seats and is priced a notch lower than the diesel variants. 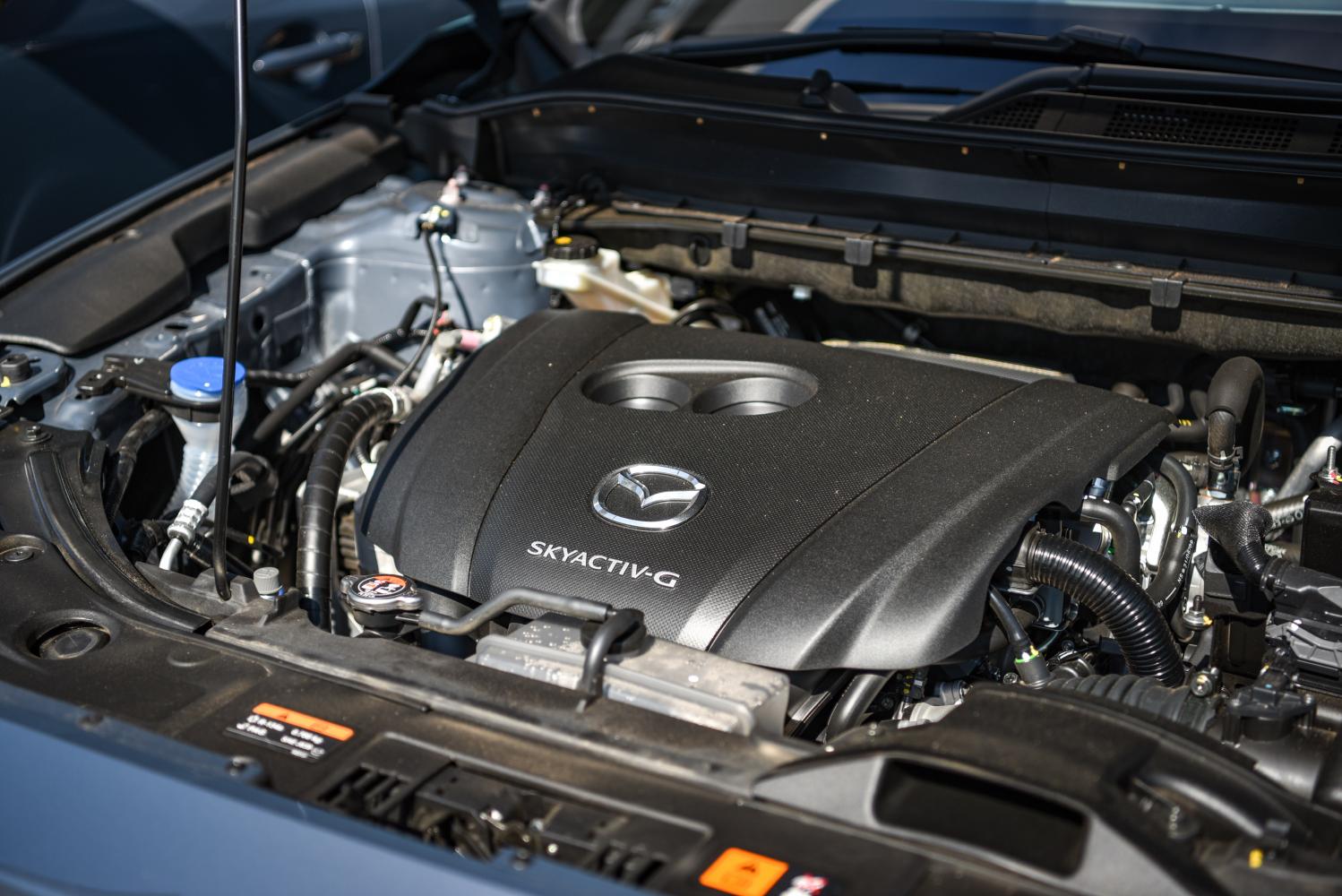 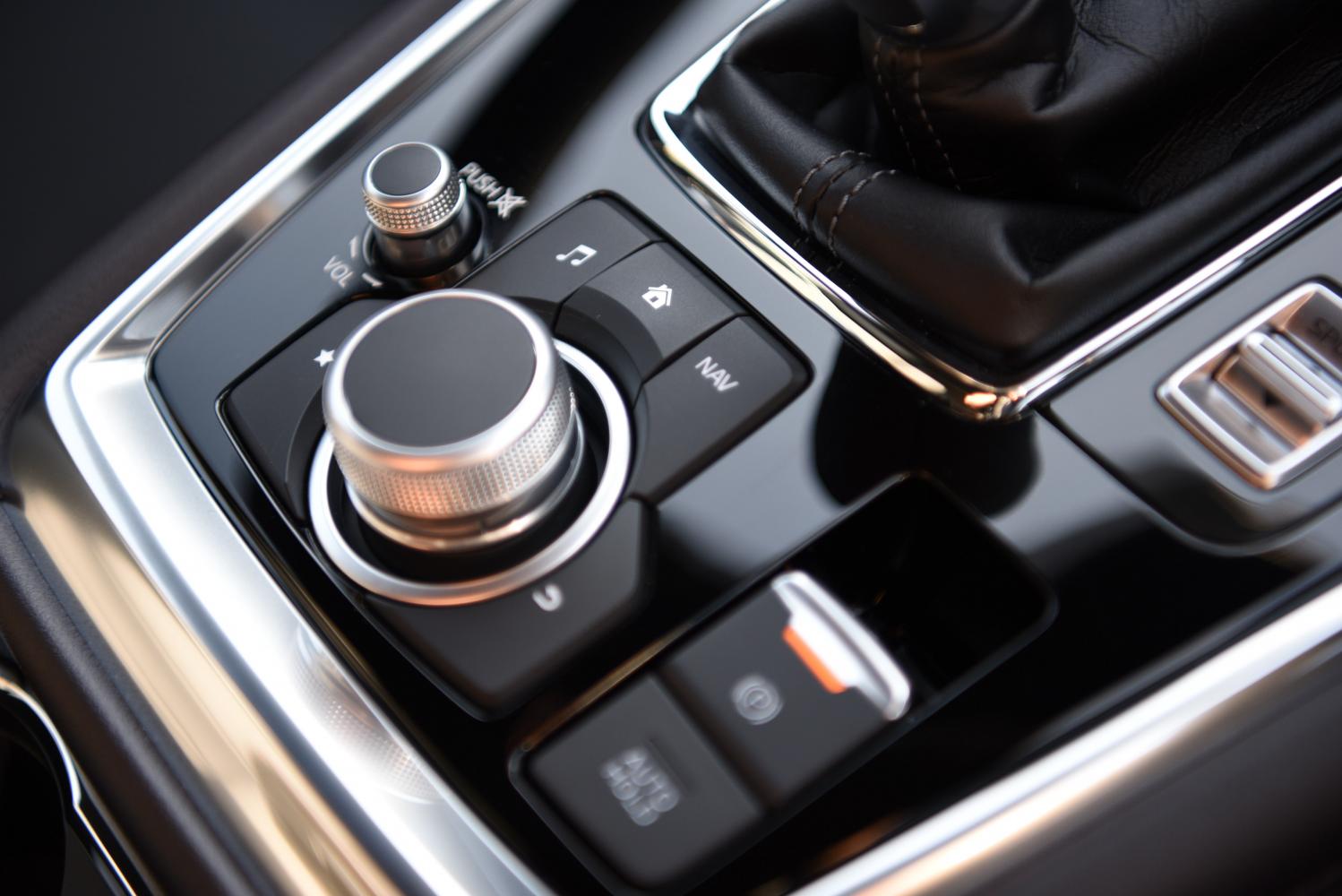 There's not much change in the appearance of the 2022 CX-8, with the exception of the new front grille for the XDL Exclusive, which comes in gun metallic grey and looks super elegant. Other trimlines get a chrome front grille with horizontal blades or a piano black front grille instead.

New 19in alloy wheels are in place across the line-up, fitted with 225/55 R19 tyres, and two new exterior colours -- platinum quartz and polymetal grey -- are on offer.

All variants get LED projector headlights and LED daytime running lights and LED signature rear lights. LED fog lamps are offered only in the range-topping XDL Exclusive. The Exclusive variants also come with a power sunroof.

The side profile is enhanced with chrome window frames and chrome strip on the skirt, along with matte black fender protector. At the rear, there's also a chrome strip connecting the rear lights as well as roof spoiler and genuine dual chrome exhaust tips, not fake ones.

Although it's getting a bit old, the CX-8 still looks pretty elegant with its "Less is More" styling concept. There's a lot of surface play that gives it simple but beautiful appearance. It's large too, measuring 4.9m in length with a wheelbase of 2,930mm, resulting in a lot of space inside, which is something Mazda isn't very good at with other models. 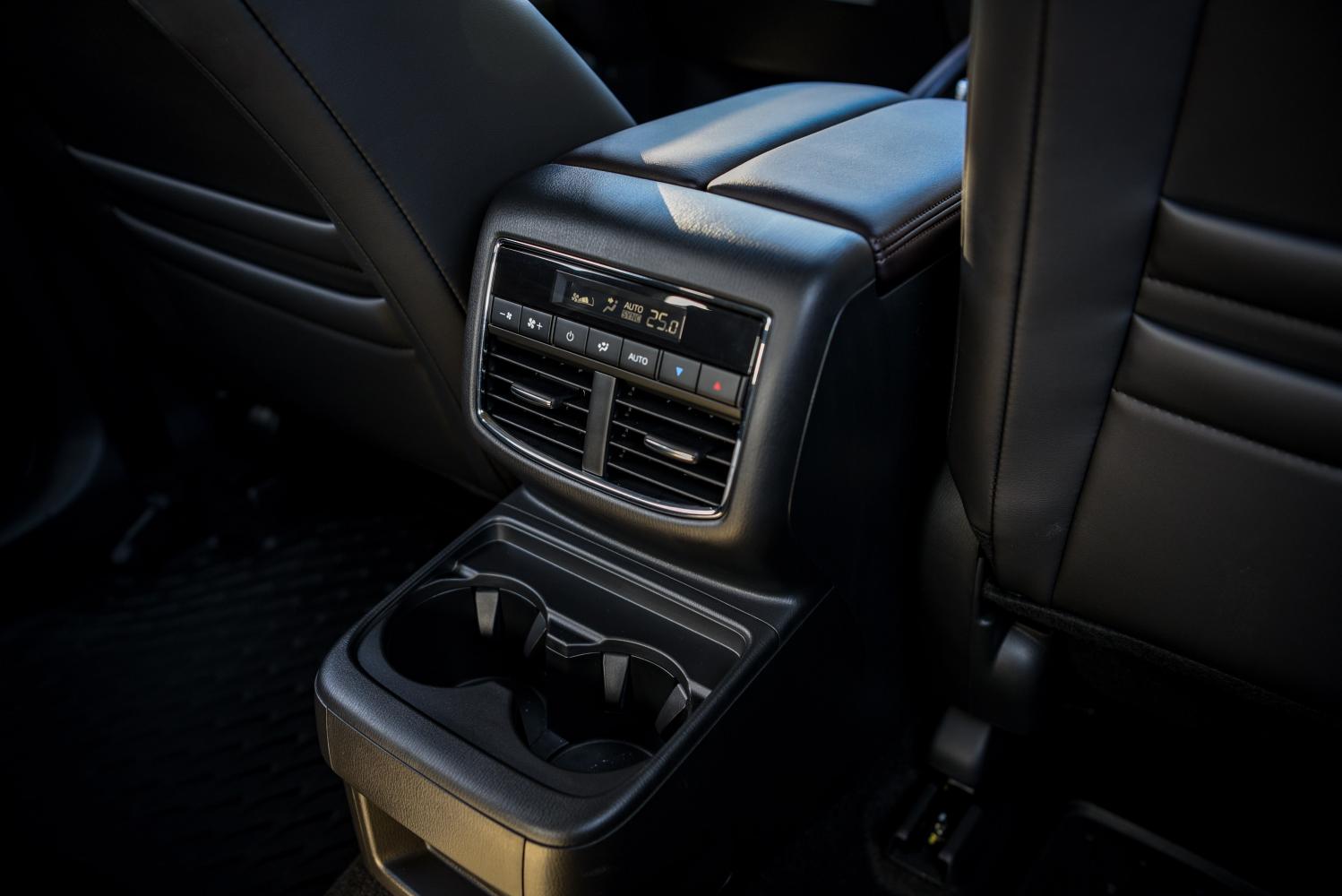 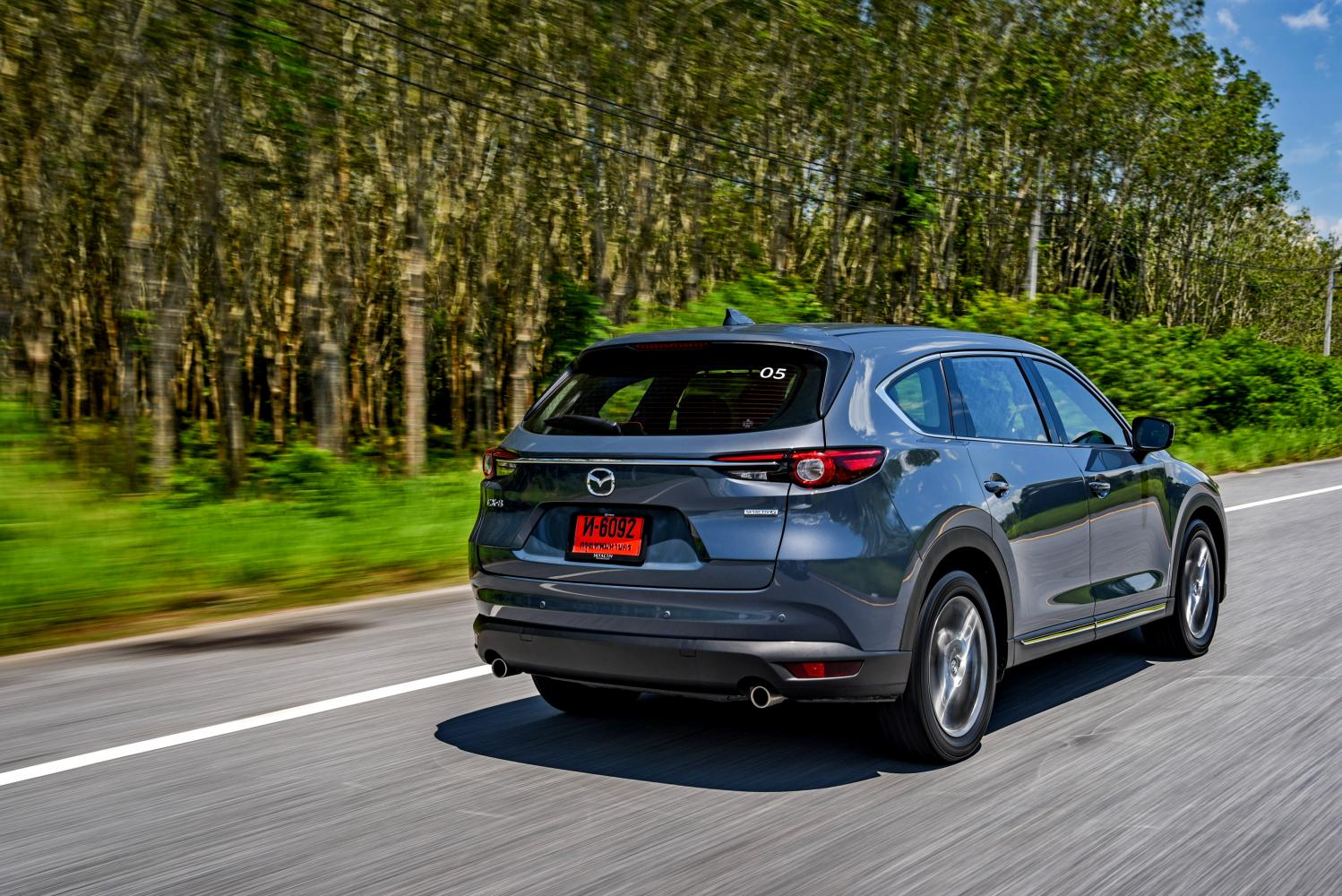 The interior is basically the same, except for upgrades that include wireless phone charger as well as wireless Apple CarPlay/Android Auto, in addition to the usual Mazda Connect with Bluetooth and voice recognition. USB ports are provided for all three rows as well as two 12V outlets.

The instrument cluster features a 7-inch digital display in the middle, but once you start the engine it looks just like a regular three-dial analogue layout. The position is also quite low compared to the eyeline of the driver, but thankfully there's a head-up display, so the driver doesn't have to glance down so often.

An 8-inch centre touchscreen, while considered small by today's standards, can be controlled by a centre command dial that looks upmarket. The menu is not too complicated, and includes several helpful minor settings such as engaging the walk-away auto door locking or three-blink signalling. 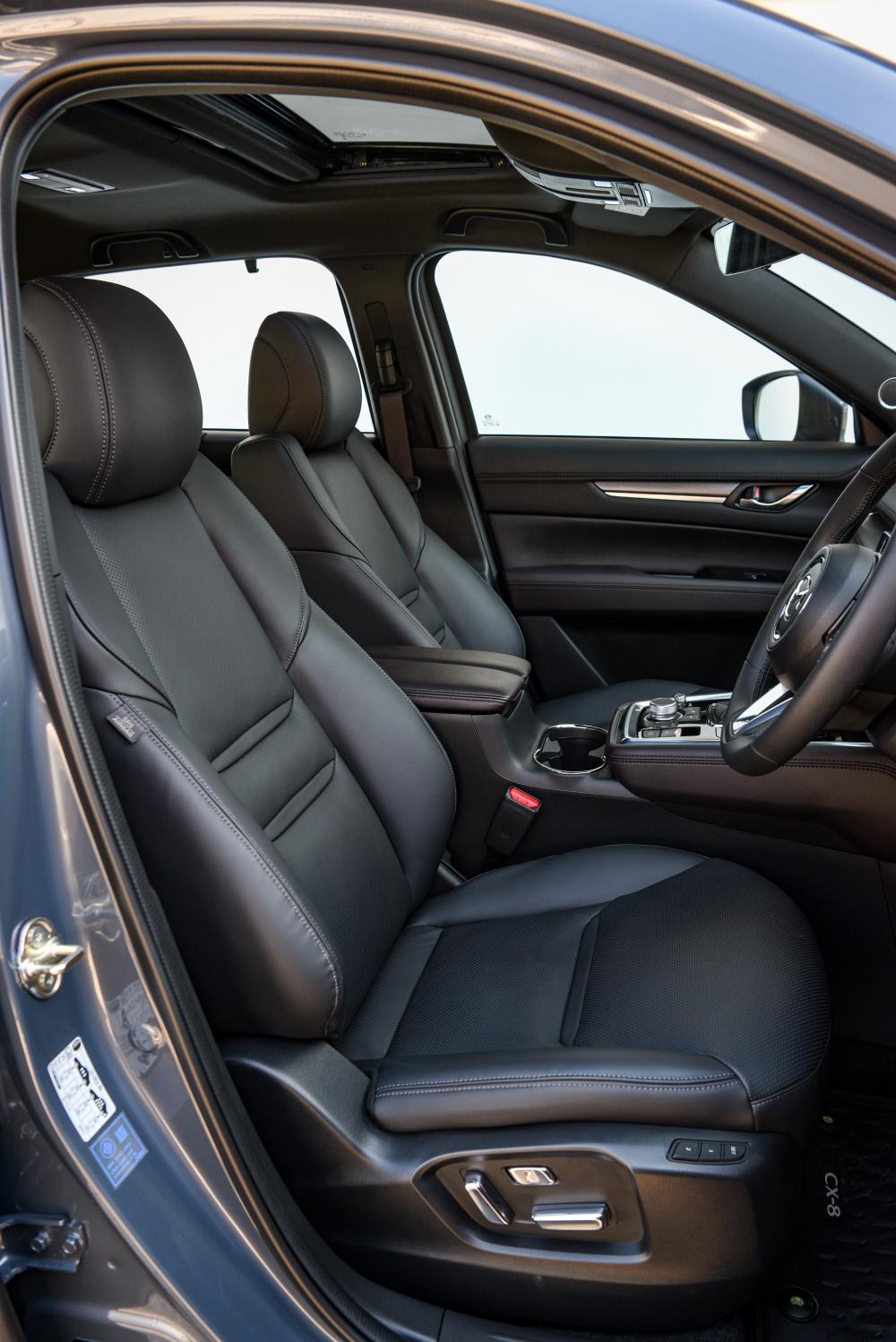 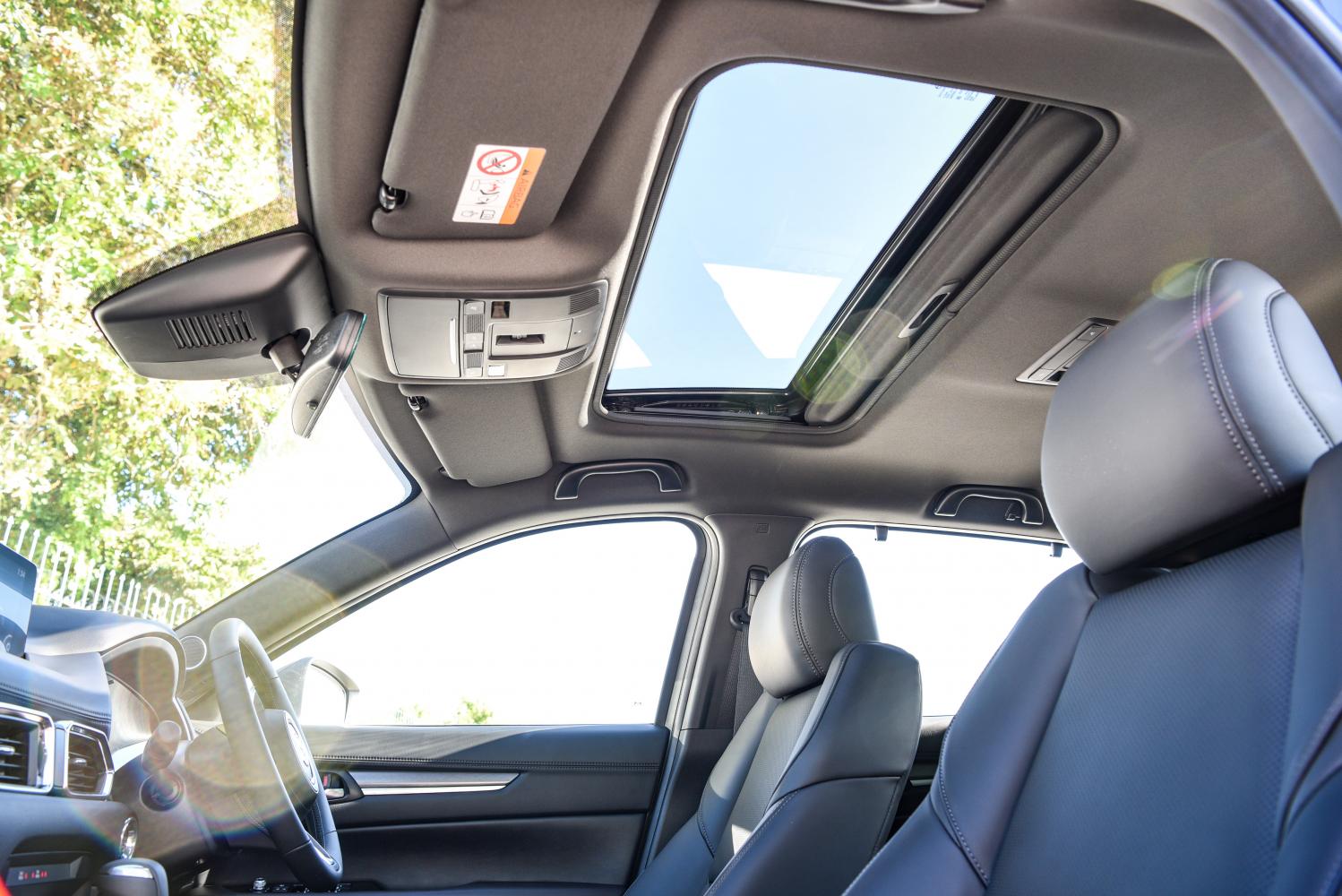 The multi-function steering wheel comes with leather and feels nice, while various control buttons are laid out nicely. There aren't too many buttons either, with cruise control buttons on the right and audio/phone/information buttons on the left. The 2.5 SP Exclusive also comes with 10-speaker Bose sound system that is a decent upgrade from the standard system offered in the two baseline models.

The interior features "deep red" leather on the door panel and centre console across trimlines, with the petrol variants getting black leather seats, warm silver and satin chrome garnish, as well as piano black surfacing around the gearshift lever. The seat cushion is positioned quite low, so it's easy to get in and out of the CX-8, although third-row passengers may need to execute some yoga moves.

The six-seat layout in the 2.5 SP Exclusive is nice though. Front seats come with ventilation and although the second-row captain seats aren't powered like in the XDL Exclusive, they offer plenty of comfort especially during long journeys (although I didn't fancy the slight bulge on the backrest). The space between the seats also adds a sense of airiness to the cabin, apart from serving as a walk-through for kids on the third row.

The third-row seats are better than average and surprisingly have enough headroom and legroom for a passenger that's 183cm tall. All variants get a power tailgate with kick gesture, which is helpful when you're approaching the vehicle with heavy items. 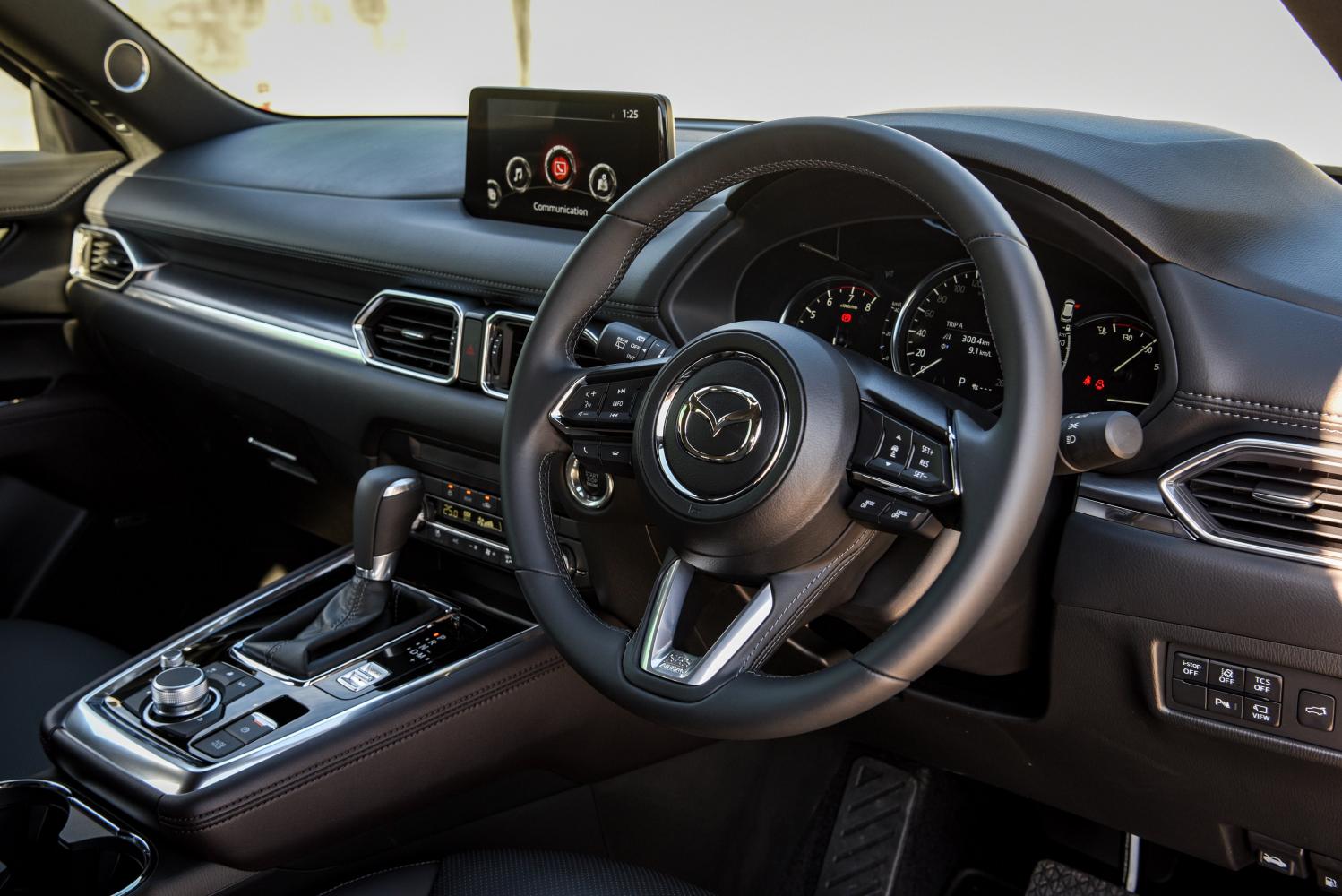 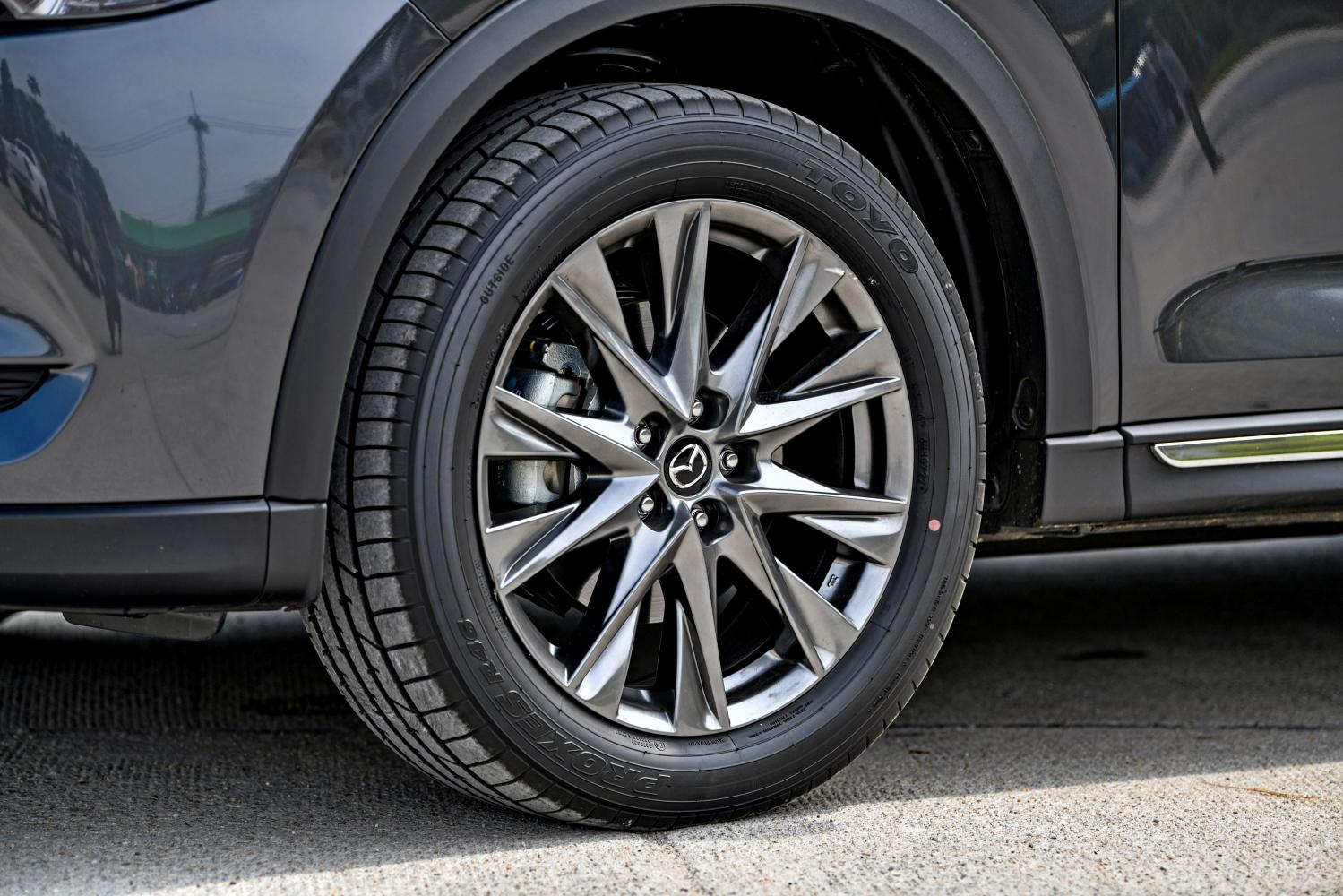 The 2.5-litre SKYACTIV-G engine in the 2.5 SP Exclusive isn't turbocharged but pumps out just about enough power and torque for its weight of almost 1,725kg -- 194hp at 6,000rpm and 258Nm at 4,000rpm. Despite being a four-cylinder engine with a large displacement, it's pretty smooth-revving and although acceleration is linear rather than back-breaking, it can do the 0-100kph dash in roughly 10secs.

The six-speed automatic transmission is smooth but doesn't come with paddle shifters. Nevertheless the manual mode via the gearshift lever is fun to use, and has the correct direction for upshifts and downshifts.

But while there is enough oomph to get it moving, fuel economy isn't impressive. The claimed figure is 13.2kpl, however in real-world situations you'll be lucky to hit 10kpl.

Still, the CX-8 is great to drive, with well-calibrated steering, throttle and brakes (discs all-round) providing the driver with a good level of driving enjoyment.

The smooth ride is partnered by a quiet cabin and good driving dynamics that's supported by GVC Plus. The system manages the torque sent to the wheels prior and during cornering, as well as engaging the brake on the outer front wheel during exit to stabilise the vehicle. The front strut and rear multi-link suspension also gets stabilisers, all teaming up to give the CX-8 enjoyable cornering performance for a vehicle with a ground clearance of 200mm. 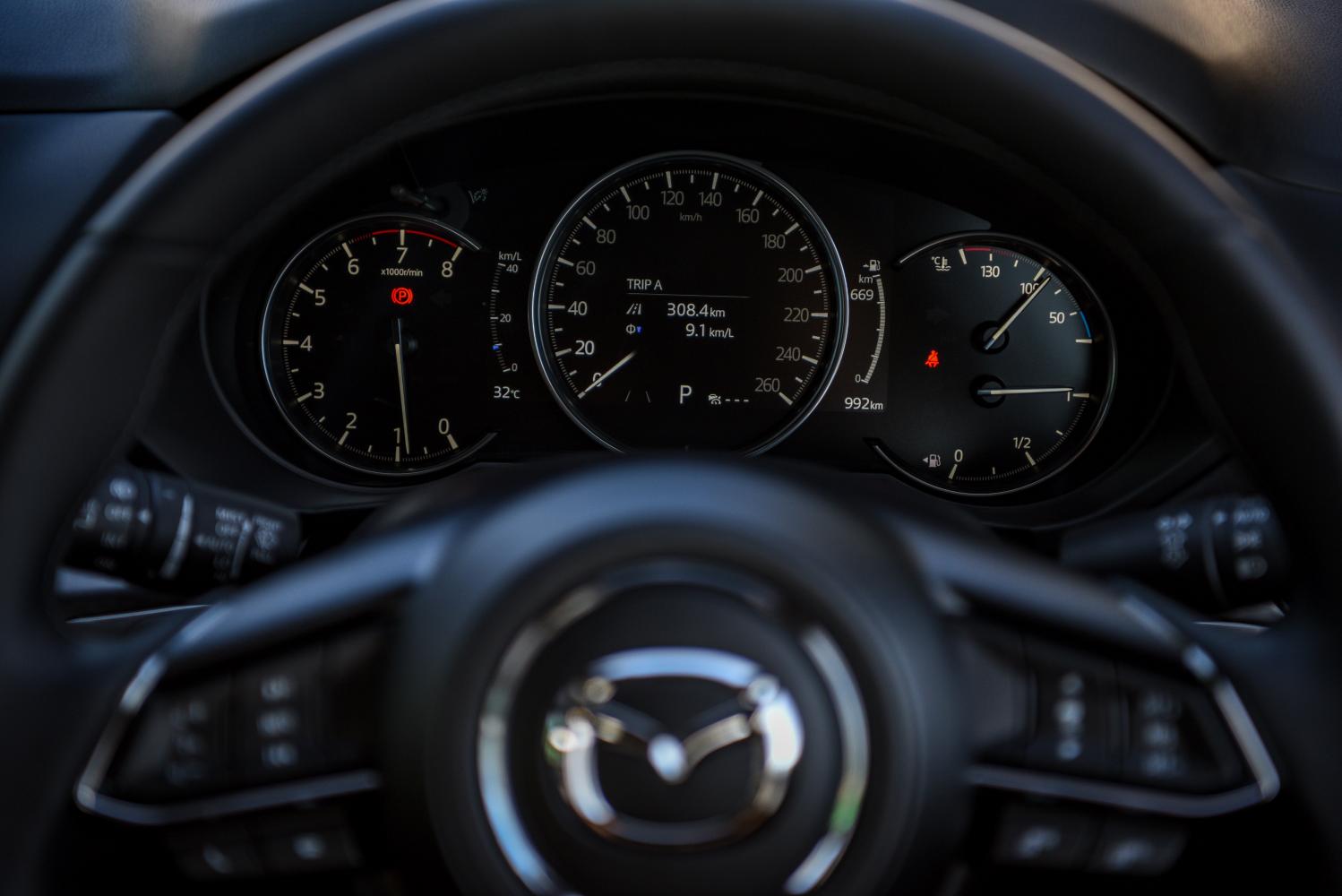 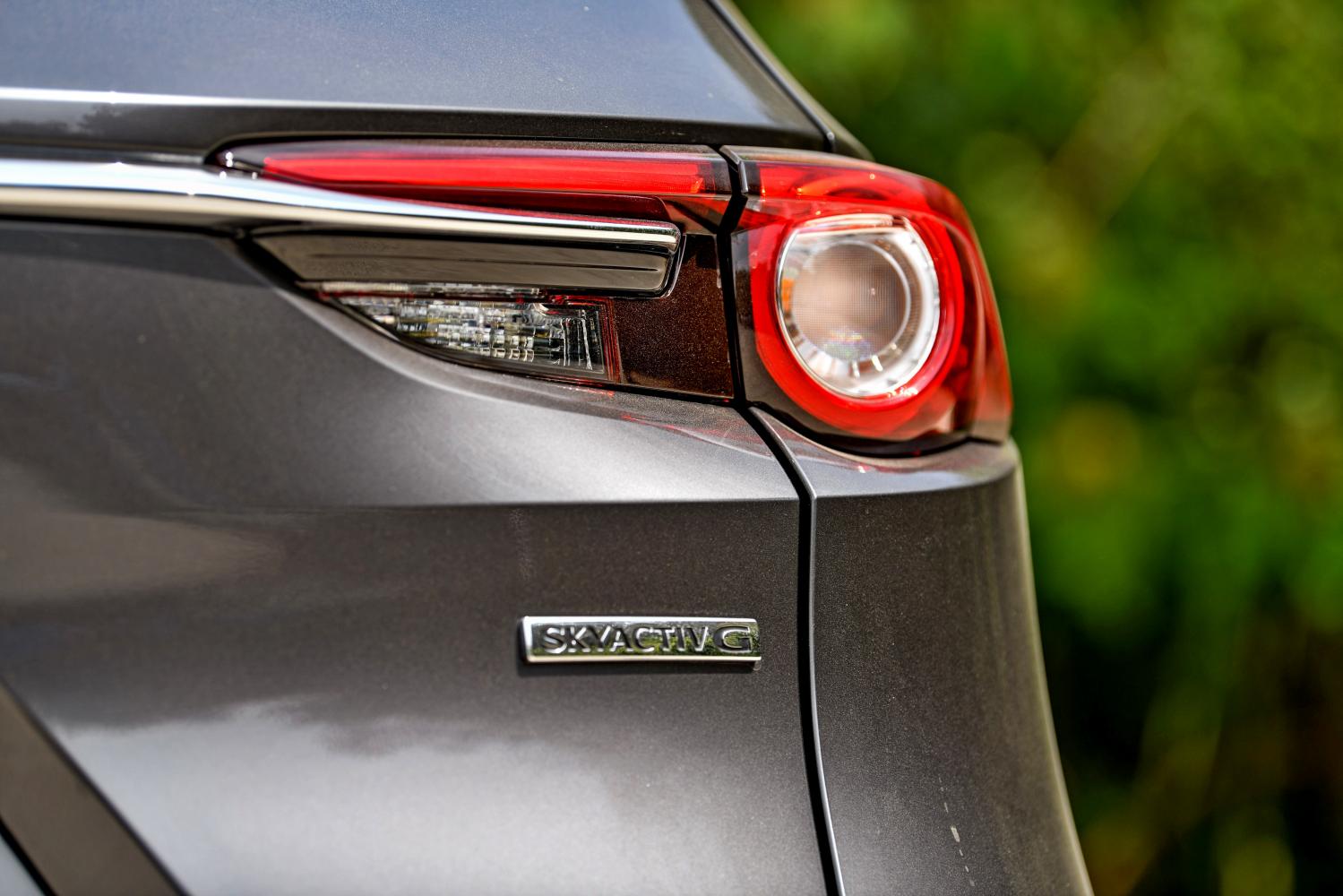 Ride comfort is way up there when driven on the highways, offering occupants lots of refinement. However, when driving at low speeds, it can lose out to sharp speed bumps and potholes too. In this respect it feels like a crossover that leans towards a large passenger car rather than an all-out SUV.

Despite the SUV looks, taking the front-wheel-drive 2.5 SP Exclusive off-roading may not be a good idea -- the XDL Exclusive is the only variant that comes with all-wheel-drive that's more capable when the going gets tough.

There are plenty of safety features courtesy of the i-ACTIVSENSE package, in addition to six airbags. The 2.5 SP Exclusive gets high beam control, but not adaptive LED headlights that are exclusive for the top variant.

While the top XDL Exclusive variant may be out of reach for many, the 2.5 SP Exclusive offers the same six-seat arrangement and several other premium features at a much lower price. Those with big families will appreciate the CX-8. 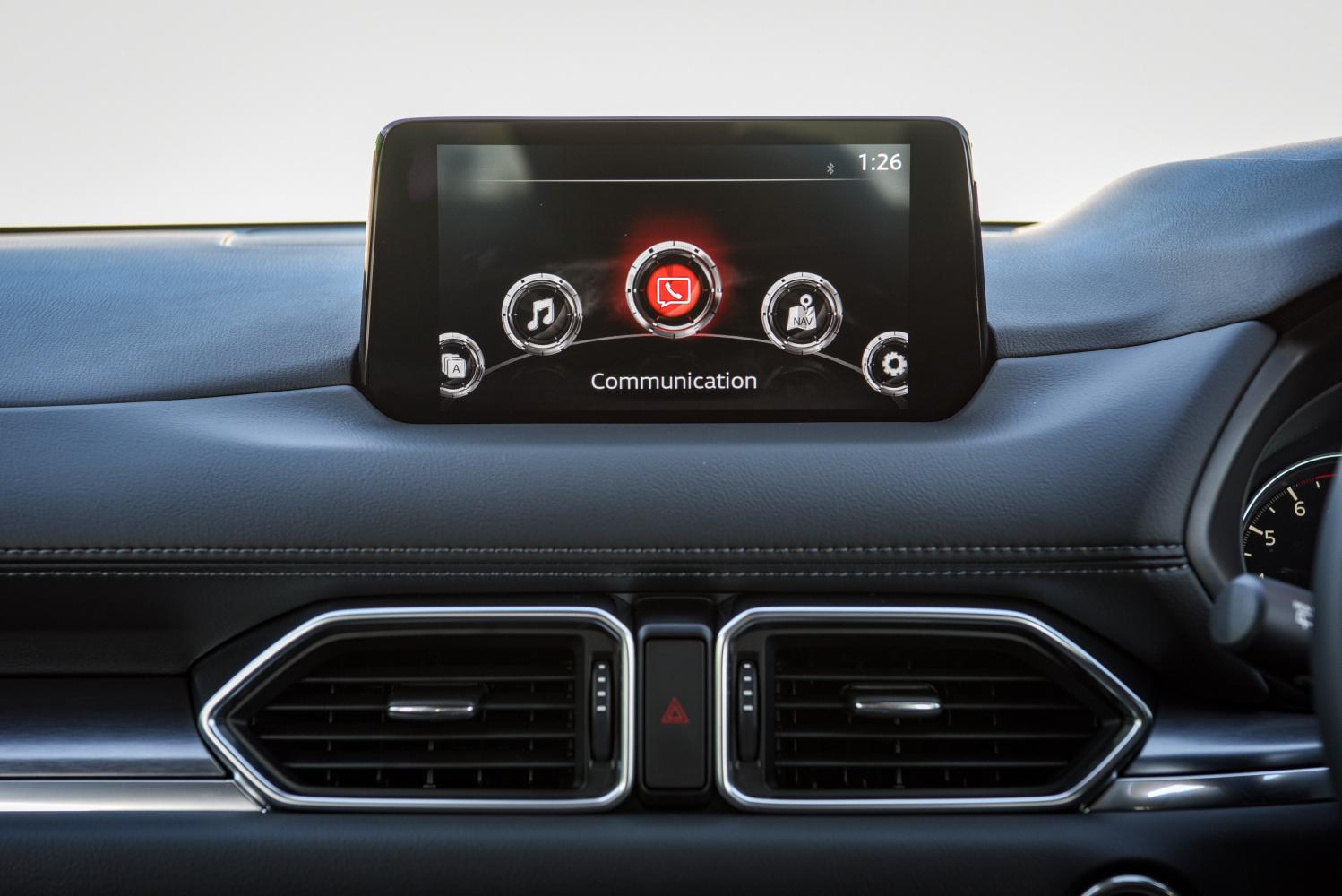 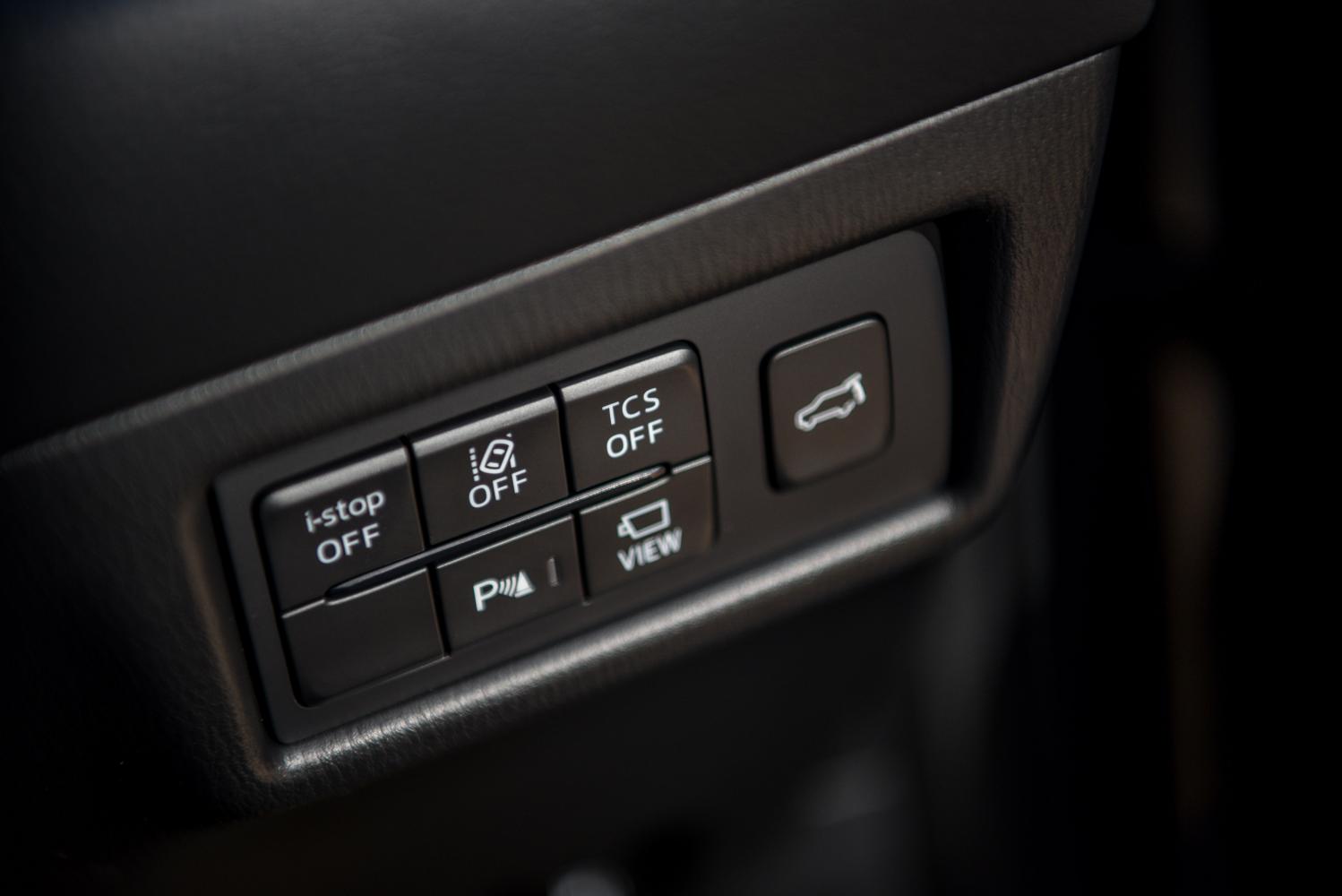 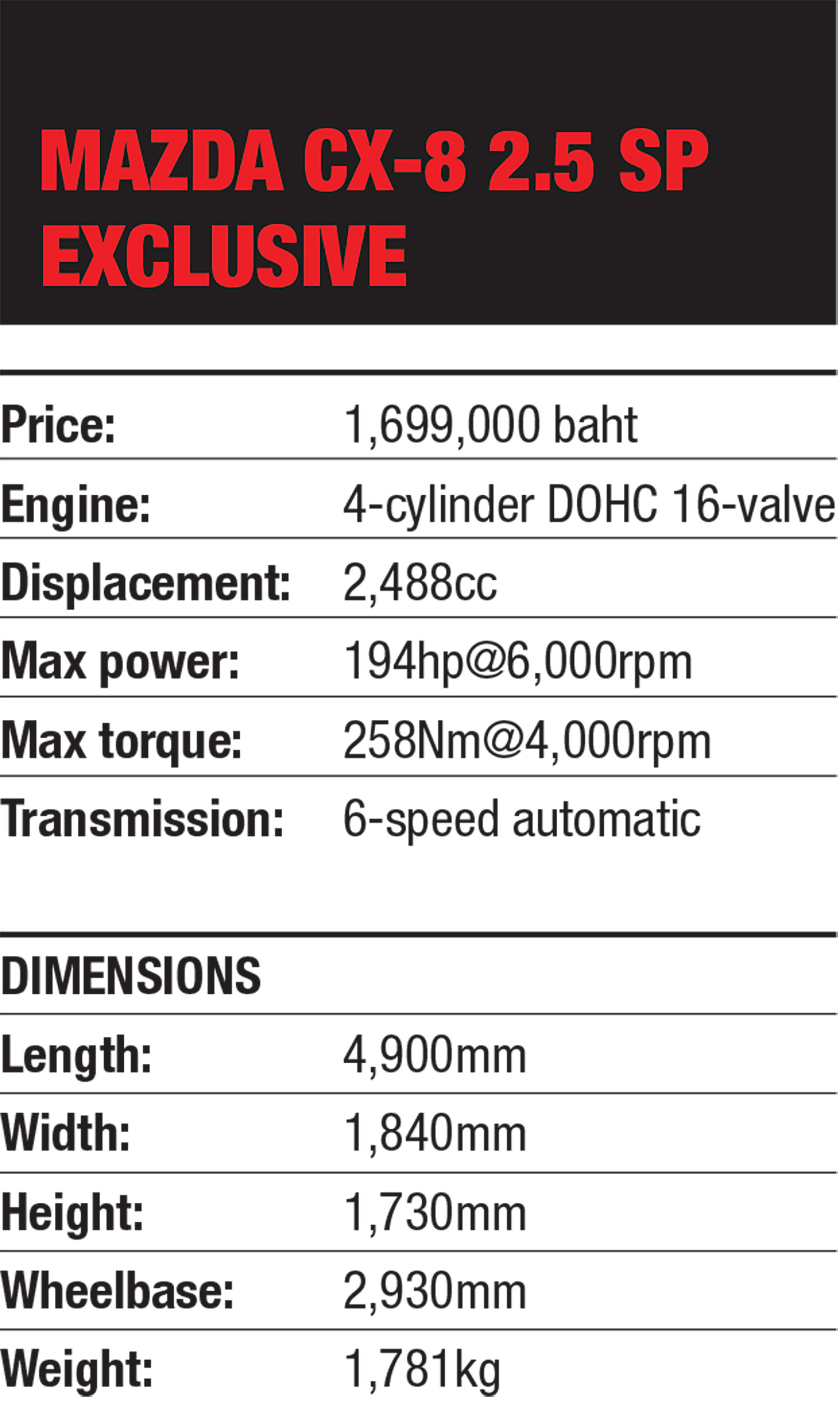 A drug courier has been arrested and 152 kilogrammes of heroin seized from his car near Talat Thai market in Pathum Thani.