Along with the all-new Ranger pickup, Ford has also introduced its PPV (Pickup Passenger Vehicle) derivative, the Everest, featuring a more luxurious interior with seven seats.

Both models were shown at this year's Bangkok International Motor Show in March where Ford started accepting orders with deliveries commencing in August.

This is the third-generation Everest, which was based on the T6 Ranger and first introduced in 2003 for the Asia-Pacific markets. The Everest is produced in Thailand and exported to over 100 markets around the world.

The Trend and Sport are equipped with a 2.0-litre single turbo diesel capable of producing 170hp and 405Nm mated to a 6-speed automatic gearbox, while the Titanium+ variants are powered by a 2.0-litre bi-turbo engine with 210hp and 500Nm along with a 10-speed automatic transmission.

For certain markets, such as Australia and the Middle East, Ford is also offering a turbocharged V6 engine with 246hp and up to 600Nm of torque. 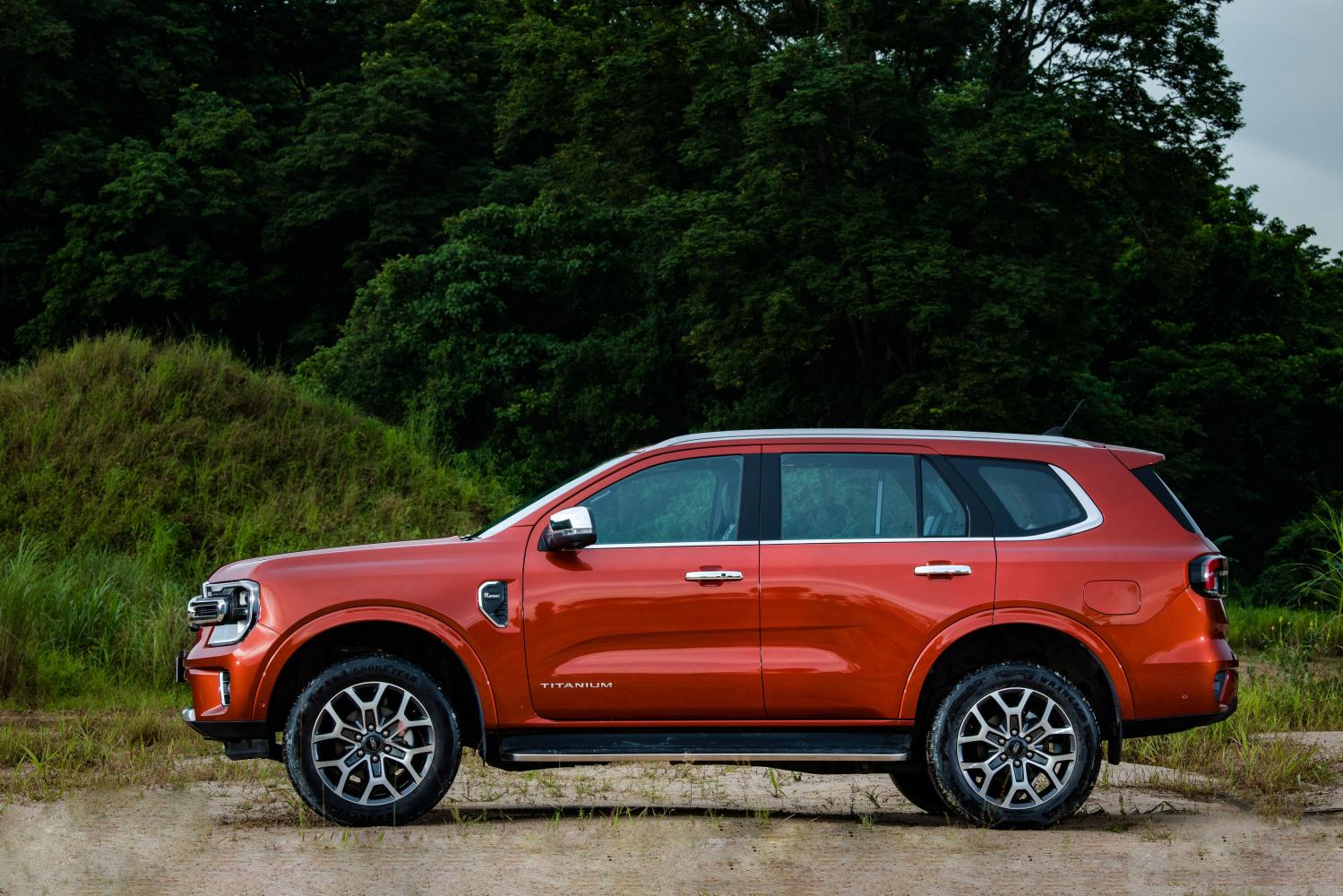 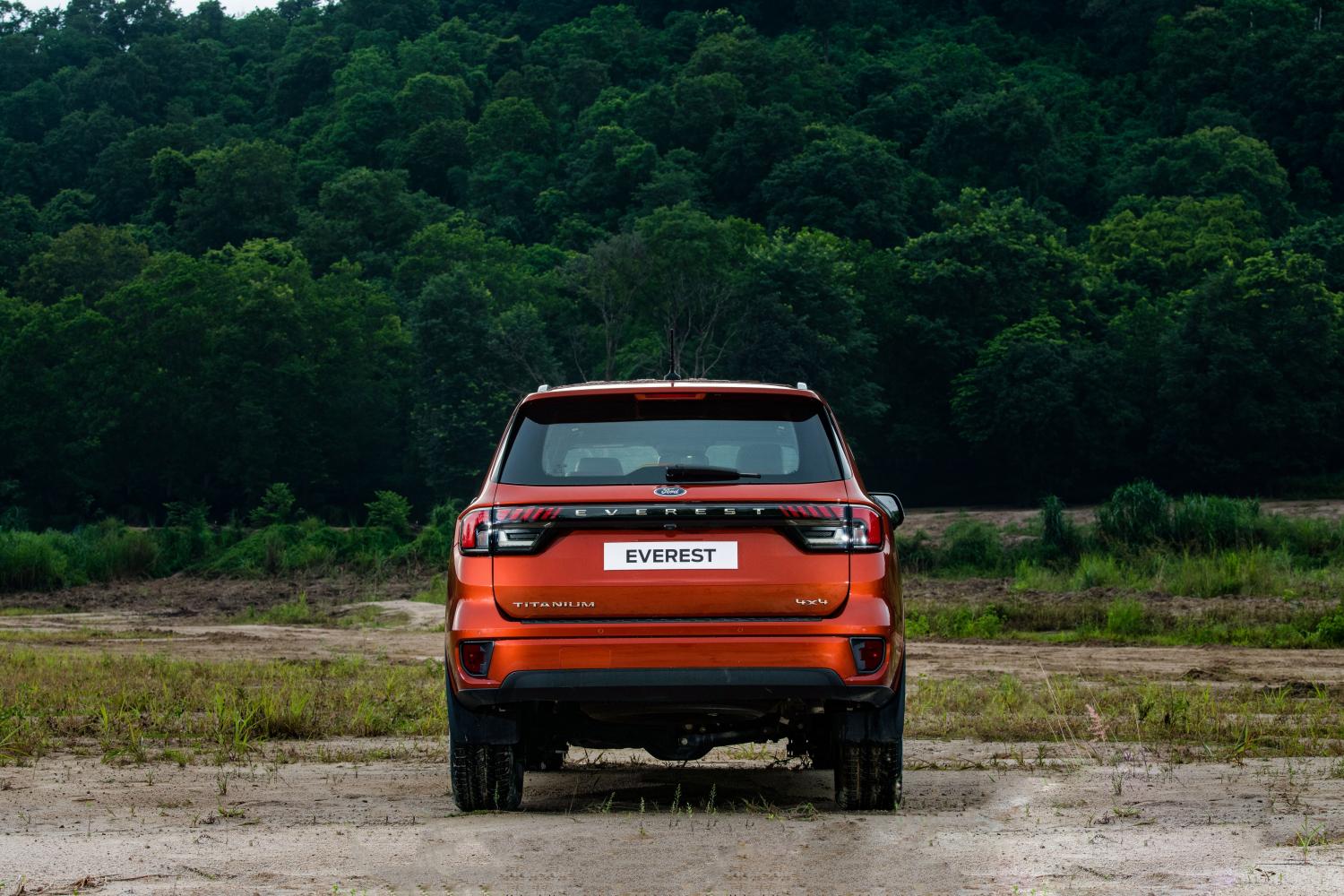 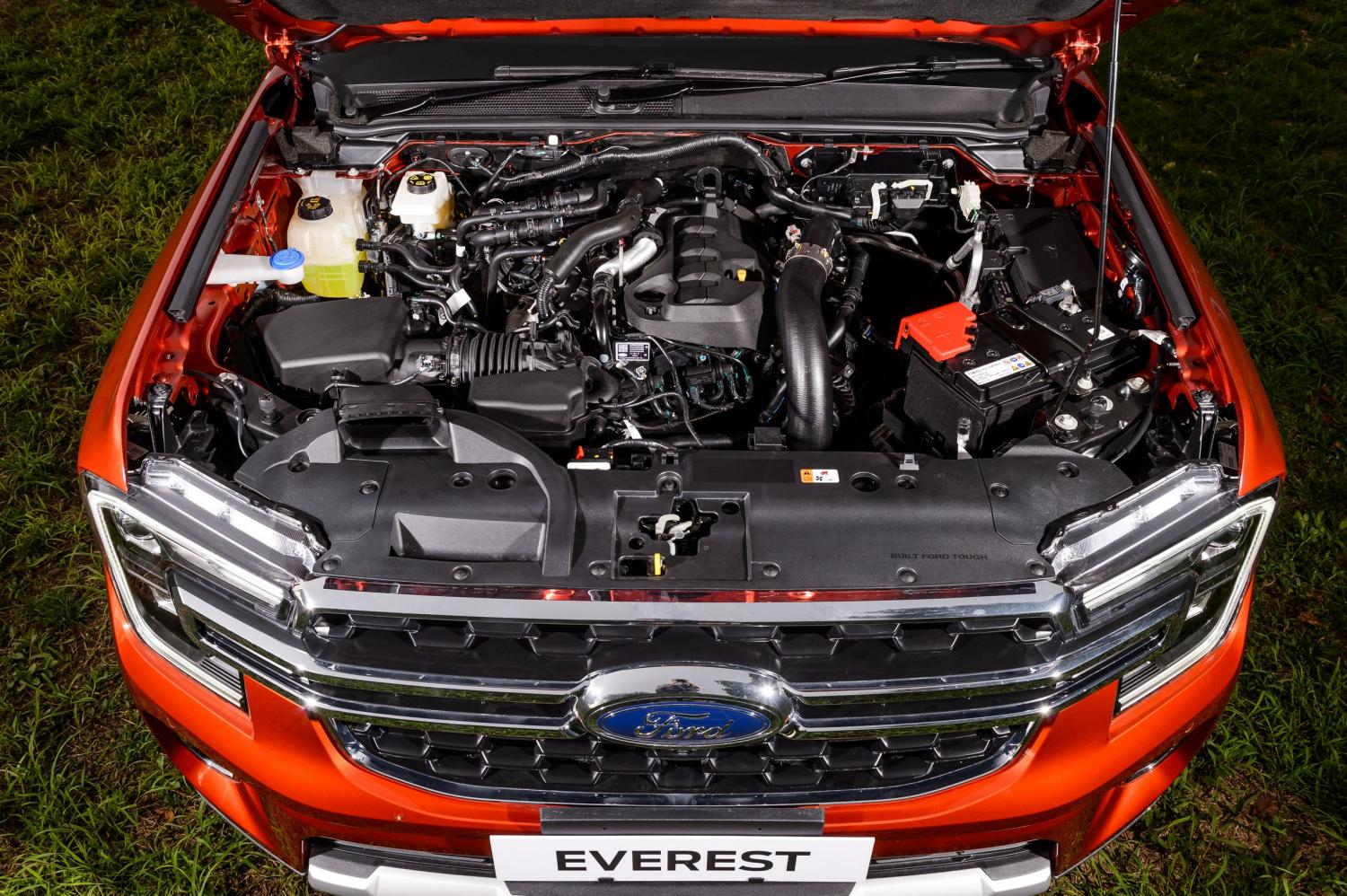 The Everest takes on a new design language featured in the Ranger highlighted by the "C-Clamp" headlight design integrated into the "Coast to Coast" radiator grille which looks modern and robust. But at the same time, the boxy shape of the front end doesn't seem like it would offer good aerodynamics.

While the development team for the Ranger needed to make sure the new pickup truck was tough enough for heavy commercial use, the Everest is focused more on family and recreation.

All Everest variants are equipped with LED headlights but only the Titanium+ 4x4 gets Matrix LEDs with adaptive front lighting. The top three variants also get LED signature tail lights that are connected via a long strip across the hands-free power tailgate.

The Titanium+ models feature chrome roof rails and black/silver side steps that make getting in and out of the Everest easier. With a ground clearance of 227mm, the Everest boasts a wading depth of as much as 800mm, giving it the ability to cross not only deeper water obstacles than before, but also the ability to tackle flooded roads (which has become the norm in Bangkok in recent weeks).

Designed by Ford Australia, both the wheelbase and track have been increased by 50mm to provide higher stability both on and off the road, along with shorter overhangs and better approach/departure angles while off-roading.

Step inside and the first thing ­everyone will notice is the 12-inch tablet-styled centre touchscreen (Trend and Sport models get a smaller 10-inch screen). This is high-quality stuff with good resolution and sensitivity, and also comes with wireless Apple CarPlay/Android Auto that's highly convenient and works smoothly.

A 360-degree camera provides various viewing angles and steering overlays while reversing or when going off-road, and there's also Active Park Assist that makes life easier when having to park the large Everest in tight spaces.

Ford has also thrown in a wireless phone charger, Ford Sync 4A with voice control as well as Ford Pass Connect and two types of USB connection at the front (which is a little difficult to reach) and rear. There are three 12V sockets (one in each seating row) and a 230V (400W) outlet for powering external equipment.

There are numerous storage areas around the cabin, and although the centre storage box is quite large and can hold lots of stuff, the door panel storage is quite narrow.

All Everest variants also come with colour digital instrument displays (8-inch for Trend and Sport and 10-inch for Titanium+) with high-quality ­graphics. There are various displays that can be chosen but unfortunately, there isn't a classic view for the rev counter and speed so you'll have to get used to the new digital layout that's offered. Head-up display isn't offered though -- it would be a great option to have in the Everest.

The upholstery is a mix of real and synthetic leather and there's a good amount of soft-touch materials on the console and door panel. Both front seats in the top three variants come with eight-way power adjustment, and the second-row seats have sliding and reclining functions. Meanwhile, the third-row seats are electrically powered, with separate switches provided in the luggage compartment for the left and right seats.

The front seats come with lumbar support and provide good comfort levels, but the second-row seats aren't as comfy. The backrest is quite flat and firm and despite the 50mm wheelbase increase, the legroom is just average. The headroom for both front and rear occupants is also average, but the huge panoramic moonroof does help open up the atmosphere inside the cabin.

The black interior theme appears a little understated, but for an additional 10,000 baht, you can get the Praline seat upholstery for the Titanium+ variant that looks way more luxurious.

Strangely, there's some cost-cutting to be found even in the new Everest too. For example, the engine compartment lid doesn't come with hydraulic struts like in the previous gen, which is a cheapish setback considering how heavy that bonnet is. 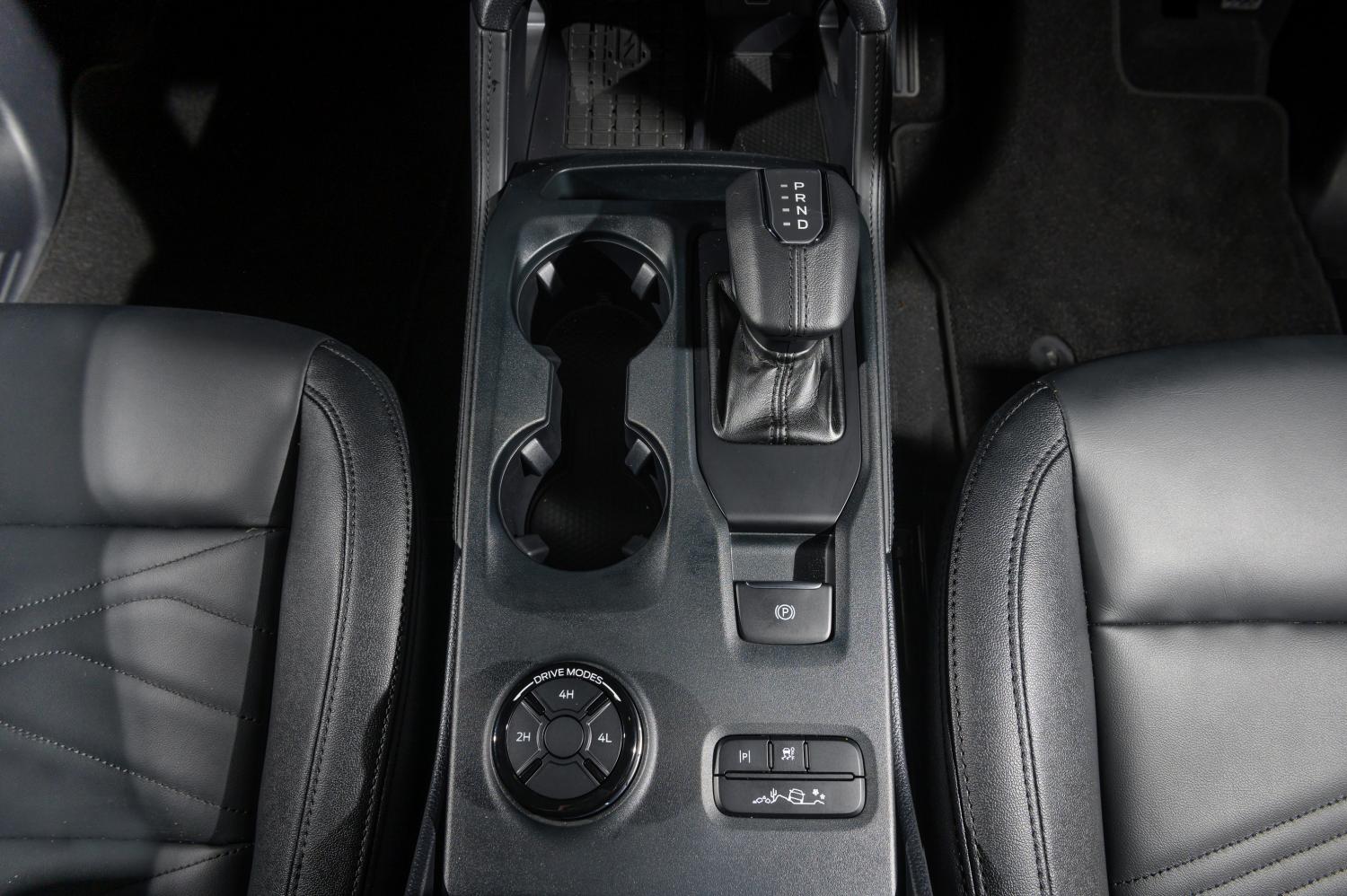 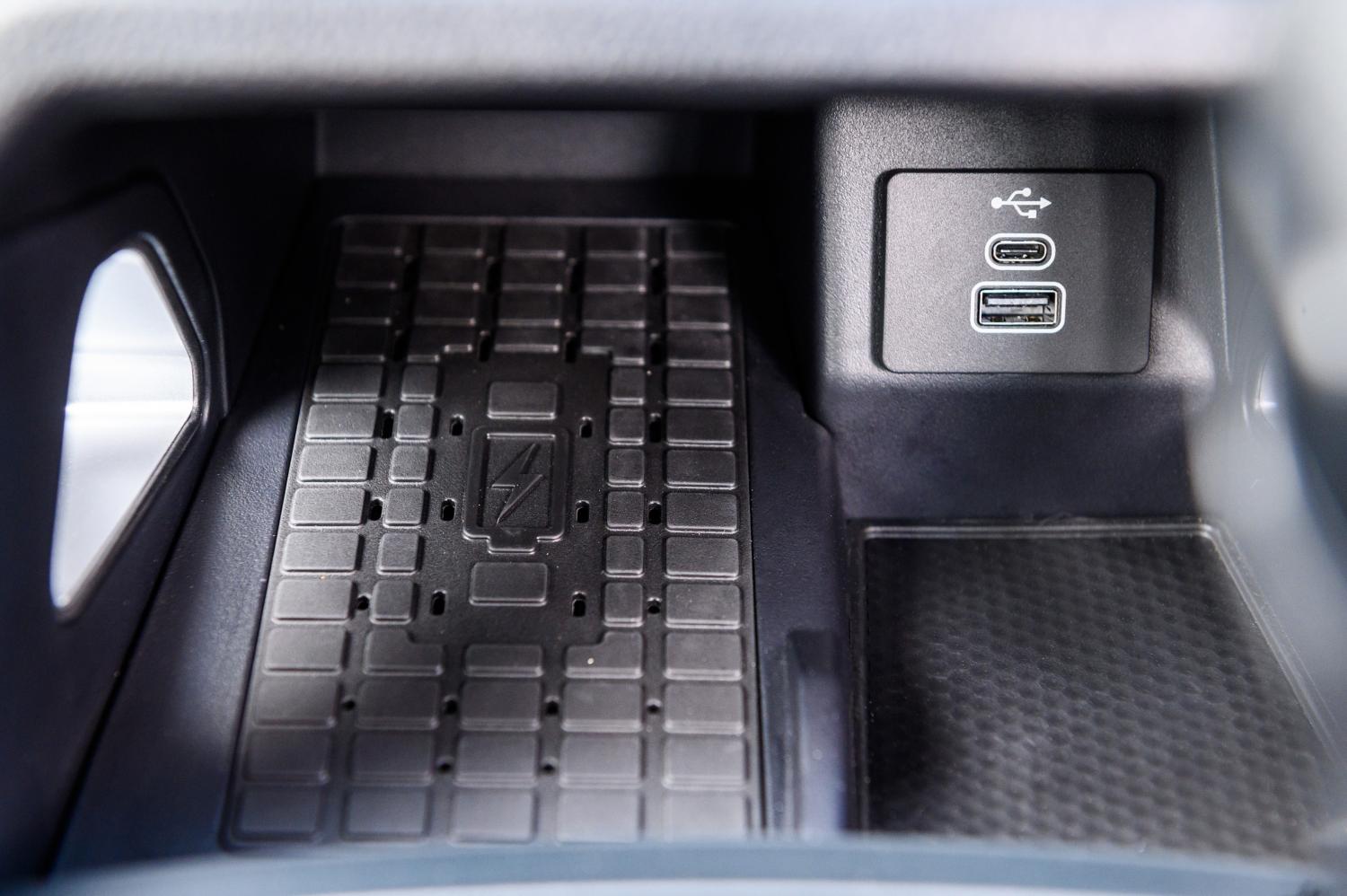 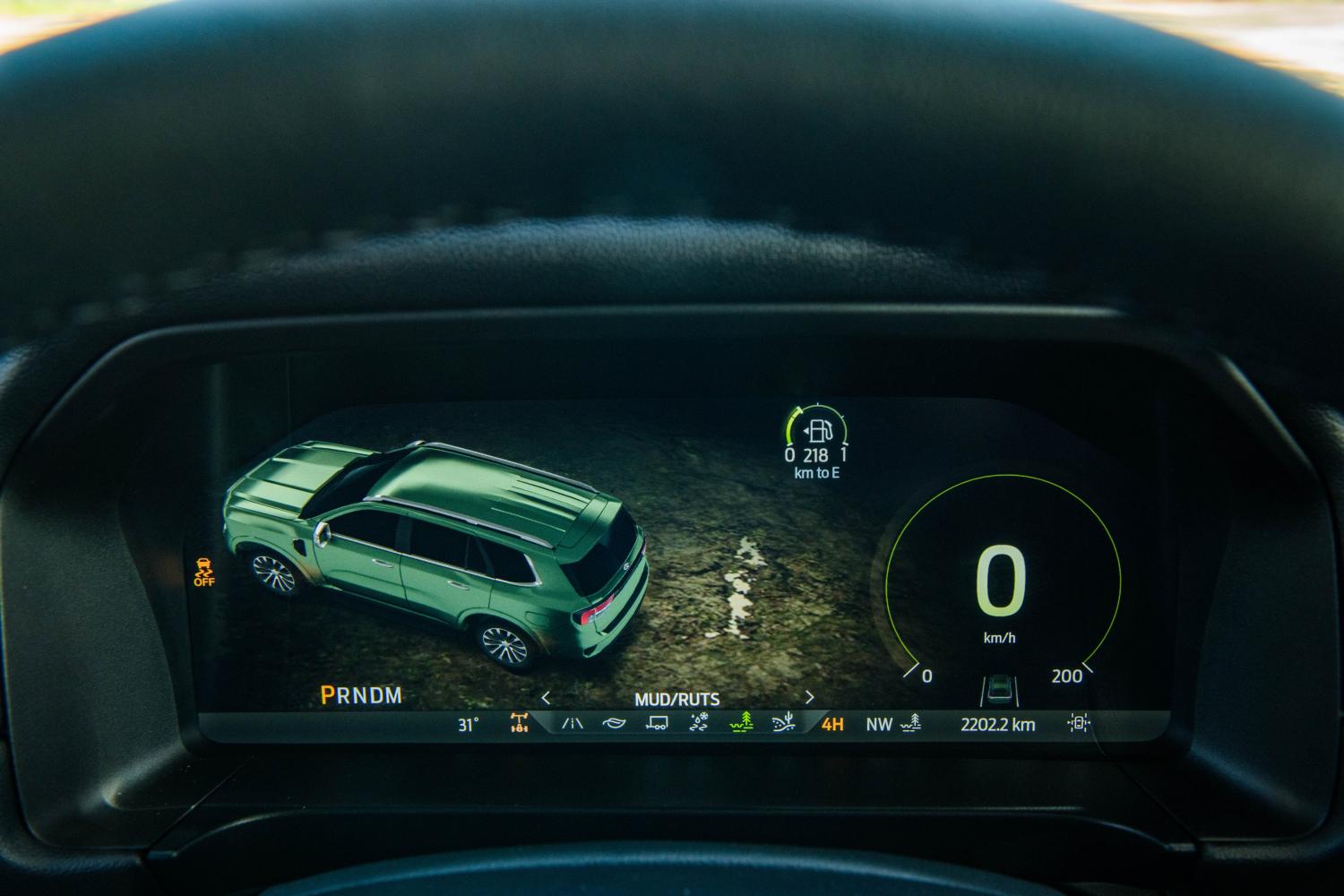 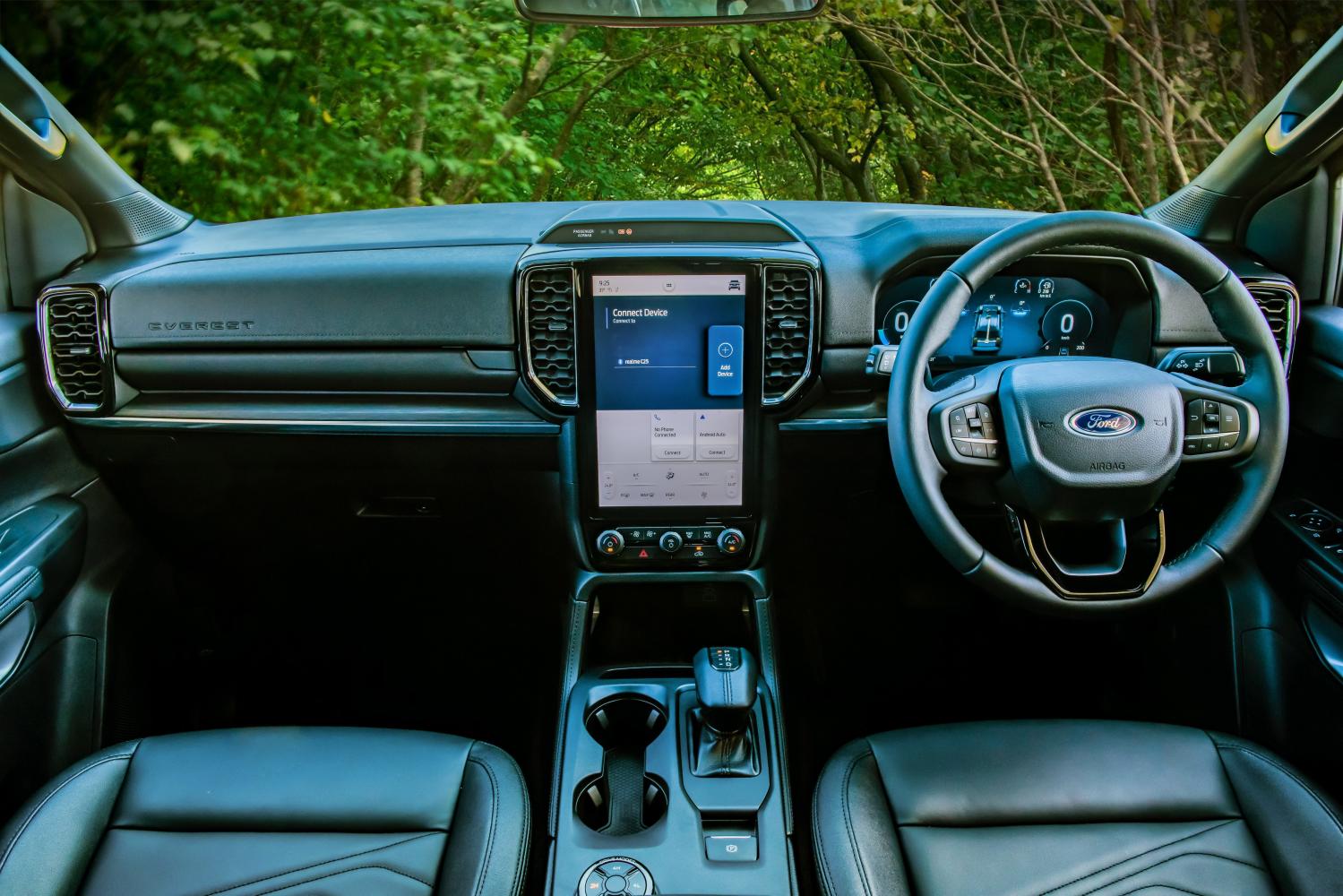 While the 2.0-litre bi-turbo engine isn't totally new, being carried over from the previous gen and further improved, the same goes with the 10-speed automatic transmission. However, for the Titanium+ 4x4, there is a new E-Shifter that looks more upmarket and comes with manual gear-change buttons (no paddle shifters) but they aren't exactly fun to use.

According to the official Thai Eco Sticker, the average fuel economy of the Everest Titanium+ 4x4 is 13.7kpl (11.7kpl in the city and 15.1kpl on the highway). In real life, the Everest consumed approximately 14kpl on the highway during our round trip from Bangkok to Kanchanaburi totalling over 360km.

The powertrain delivers smooth torque delivery with 500Nm being available from 1,750 to 2,000rpm. The engine appears smoother than before and the transmission works nicely too, although 10 gears is a lot to work with when driving in manual mode. It is best to drive it in automatic and let the system do the shifting.

The manual mode comes in handy while off-roading, and the Everest is a capable one here. While the first three variants are two-wheel-drive, the top variant is four-wheel-drive and comes with an electronic locking rear differential plus Ford's Terrain Management System that is taken from the first-gen Ranger Raptor (and looks a lot like Range Rover's Terrain Response system).

There are six driving modes you can pick here -- normal, eco, tow-haul, slippery, mud/ruts and sand. There is an electronic shift-on-the-fly for selecting between 2H and 4H at any speed. Meanwhile, 4L is provided for use on steep or rocky tracks and deep sand.

What I liked most in the new Everest is the smooth ride courtesy of the front double wishbone and rear Watt's Link suspension. There are stabilisers both from and rear and with the increased track and wheelbase, the Everest provides occupants with a high level of ride comfort when driving on the highway.

When driving in poor road conditions, the suspension also soaks up shock and vibration effectively, something you don't normally expect from a pickup-based vehicle, which is usually quite harsh and bouncy. In the Everest, you feel like you're driving on a carpet at all times.

Cabin noise has been improved over the previous model too, making the Everest more enjoyable to be in.

The steering offers good refinement and feels with lots of power assistance at low speeds, although there's not much precision when entering sharp corners, which is a general characteristic of vehicles in this segment. Nevertheless, driving the Everest on a daily basis turns out to be a super comfortable experience.

Brakes are discs all-round with a firm pedal feel, and the auto brake hold function performs brilliantly, offering smooth stops and starts without having to shift from D to N and vice versa. 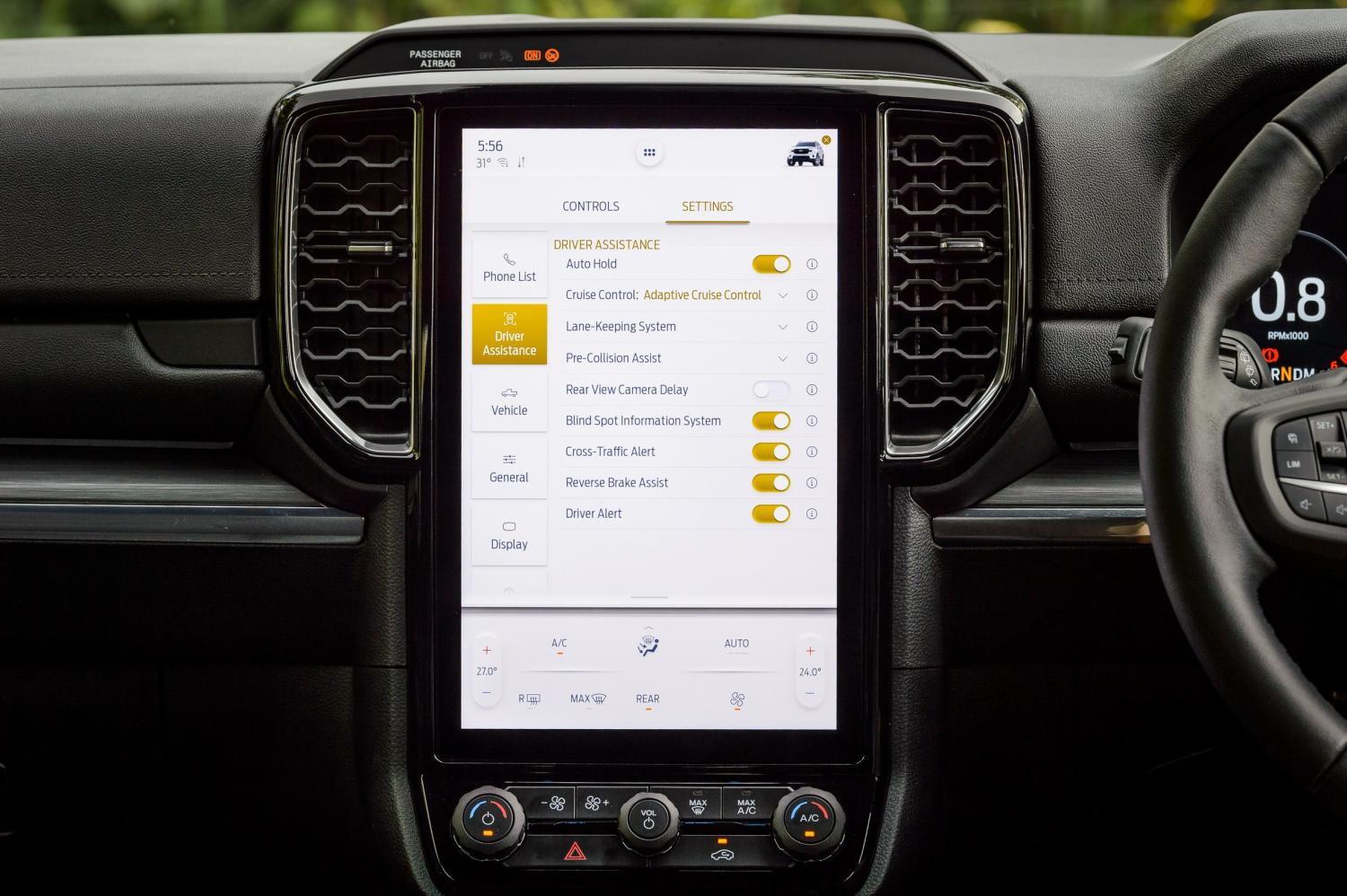 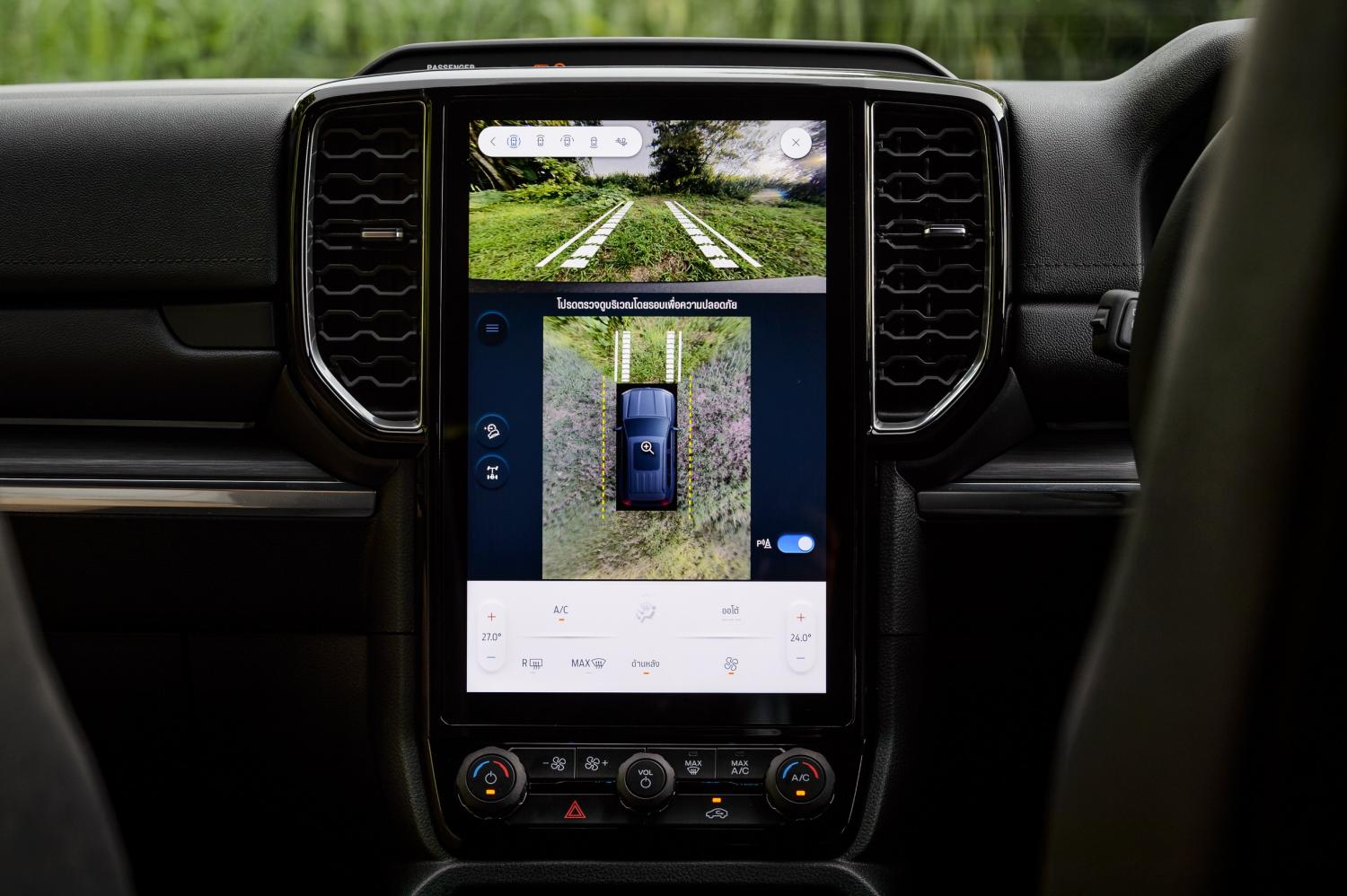 The new Everest Titanium+ 4x4 is a fully-loaded PPV that offers a high level of intelligent safety and lots of comfort features, as well as an up-to-date infotainment system with the largest touchscreen you'll find in this type of vehicle.

While there's not much improvement in terms of engine performance, the ride quality is excellent, making this a great daily transport with off-roading capability. 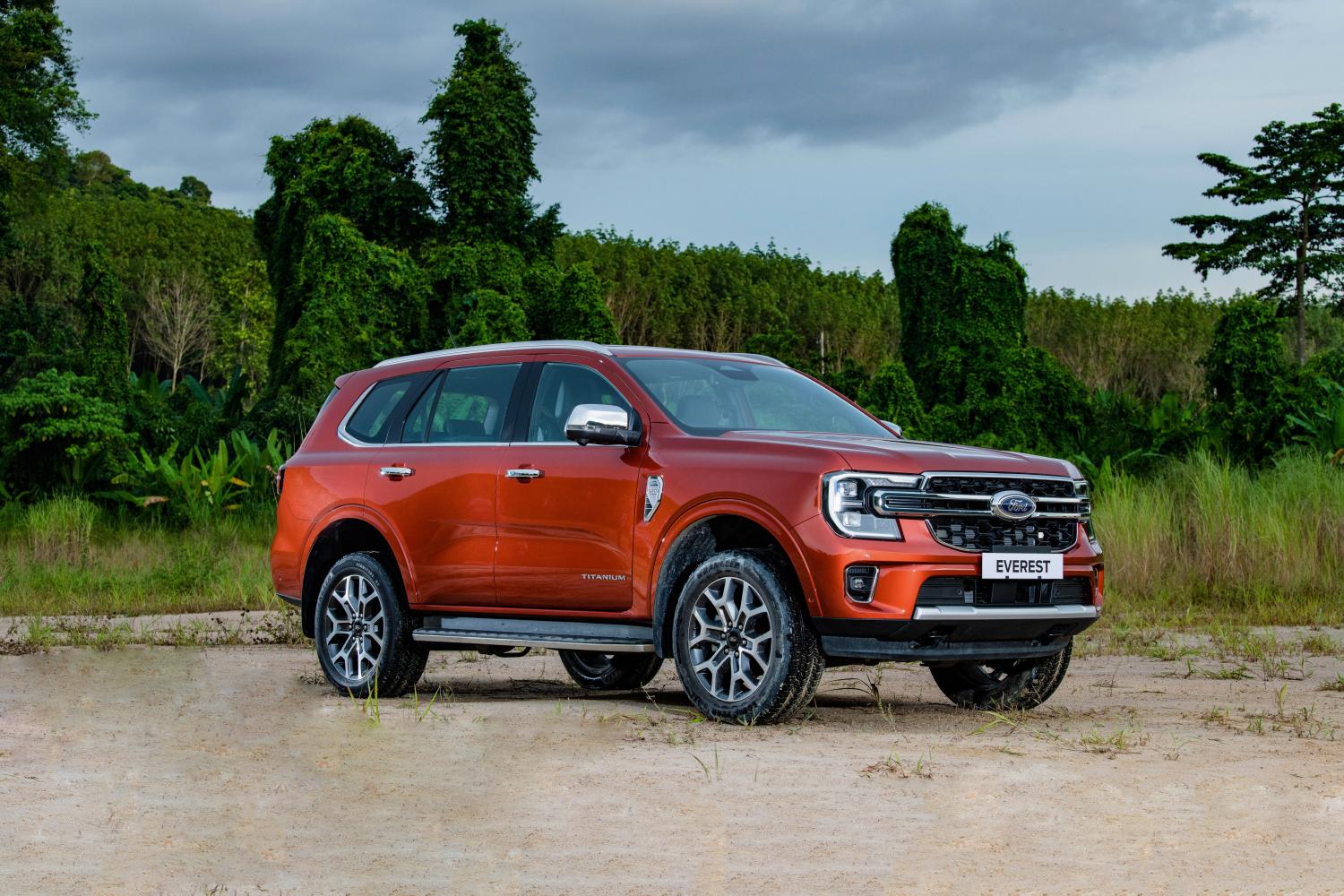 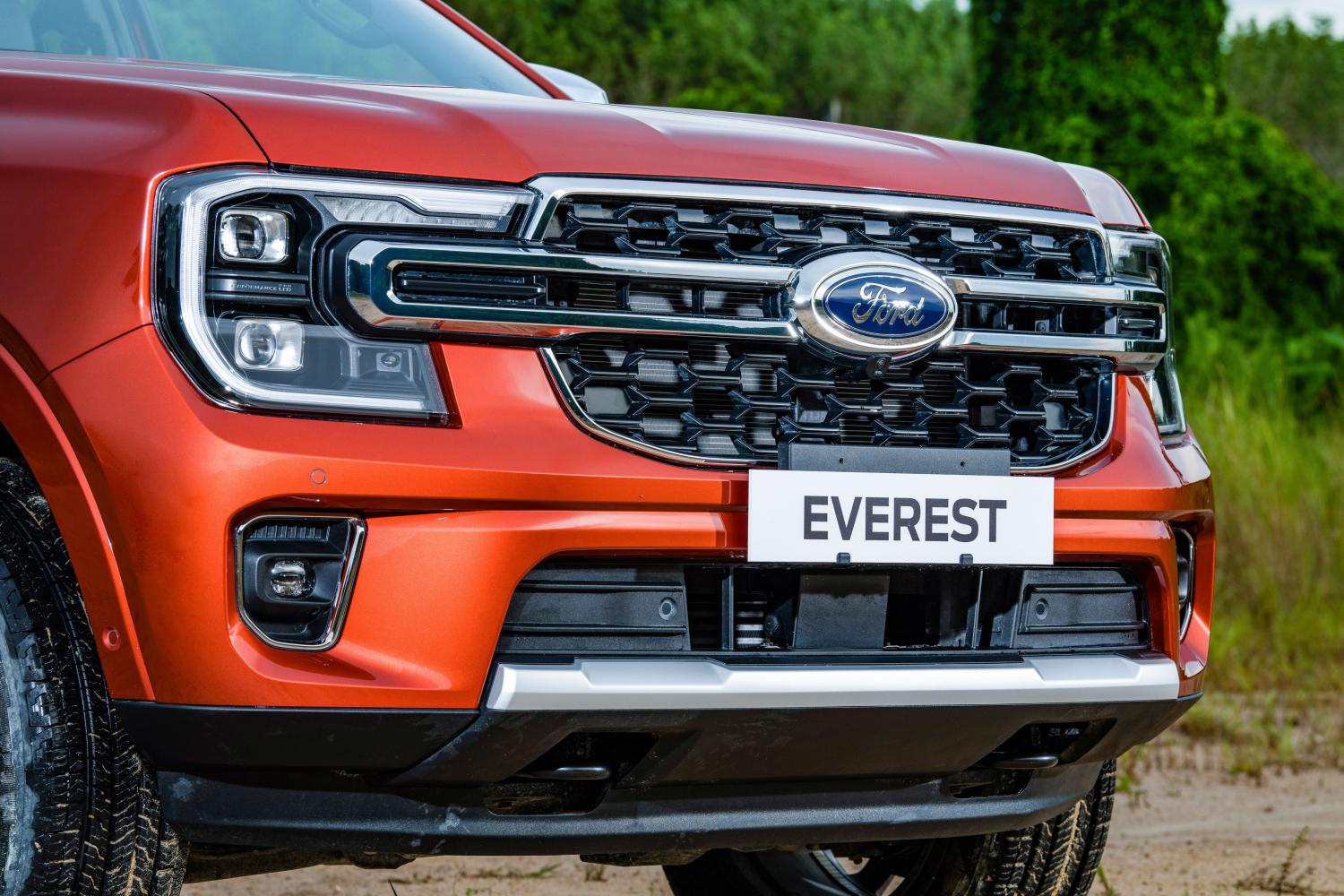 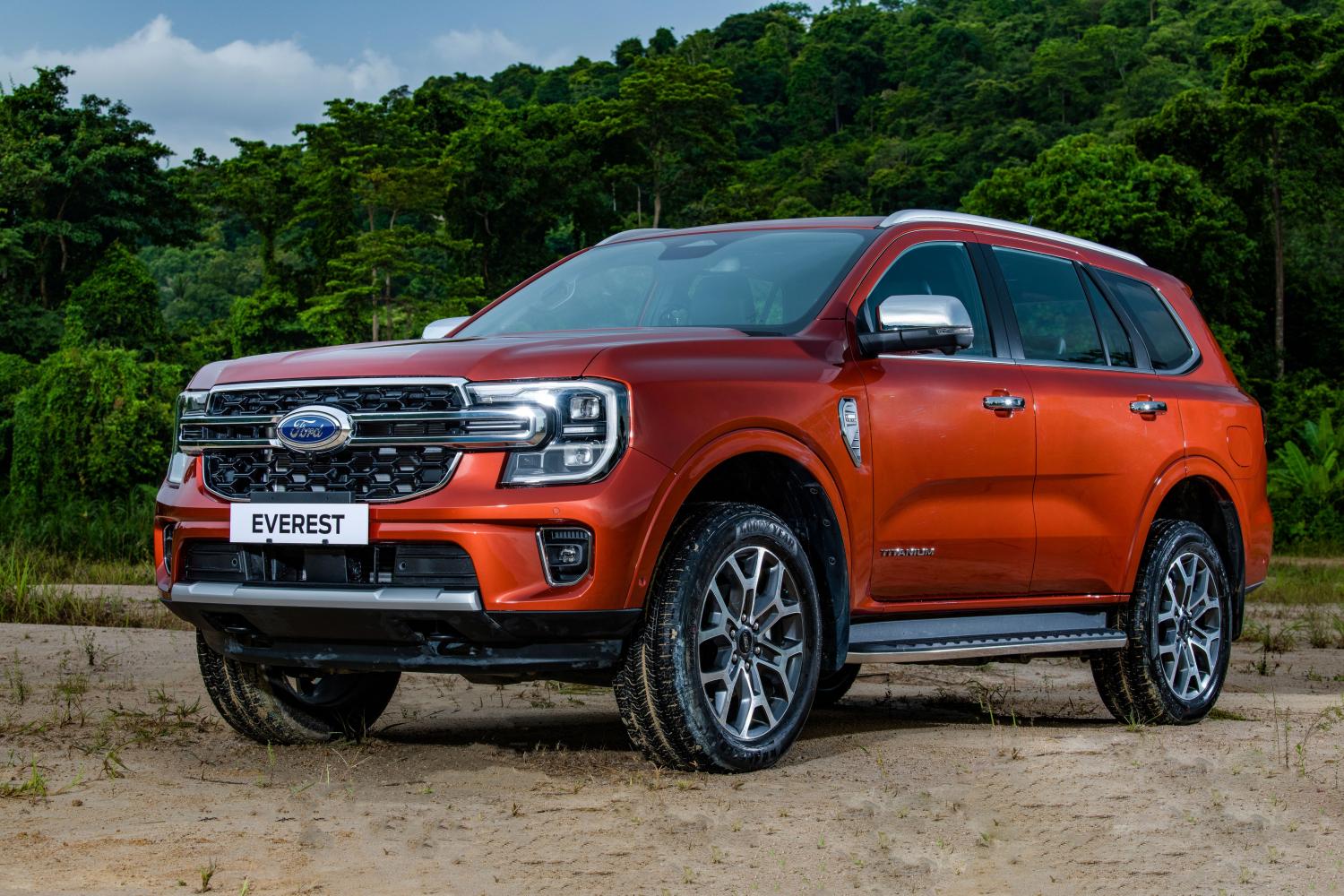 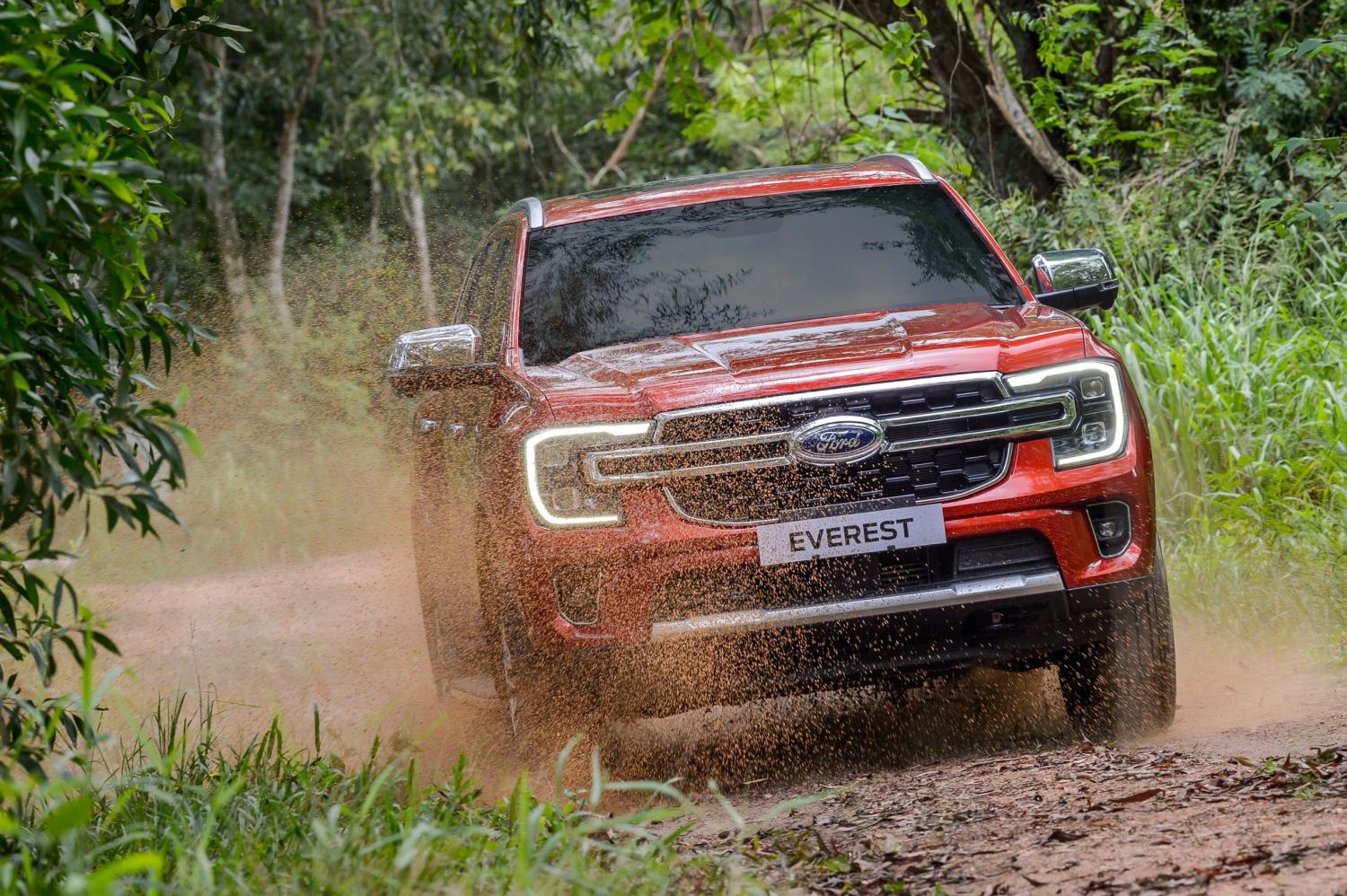 The Joint Standing Committee on Commerce, Industry and Banking (JSCCIB) is opposing the Pheu Thai Party's pledge to raise the daily minimum wage to 600 baht because it could affect the business sector's competitiveness.

Mingkwan Sangsuwan who joined the ruling Palang Pracharath Party, faces a challenge from key figures within the party over its choice of prime ministerial candidates.

Three former division commanders of the Immigration Bureau have taken bribes in exchange for approving applications for a non-immigrant visa from more than 3,325 Chinese nationals who entered Thailand on a tourist visa.