The latest Mitsubishi Triton has been repackaged amid tough competition

While the Thai pickup market is heating up with new and improved models from various automakers, Mitsubishi is hoping to maintain its market share with the 2022 Triton which comes with special packaging, adding some zest to this ageing model. 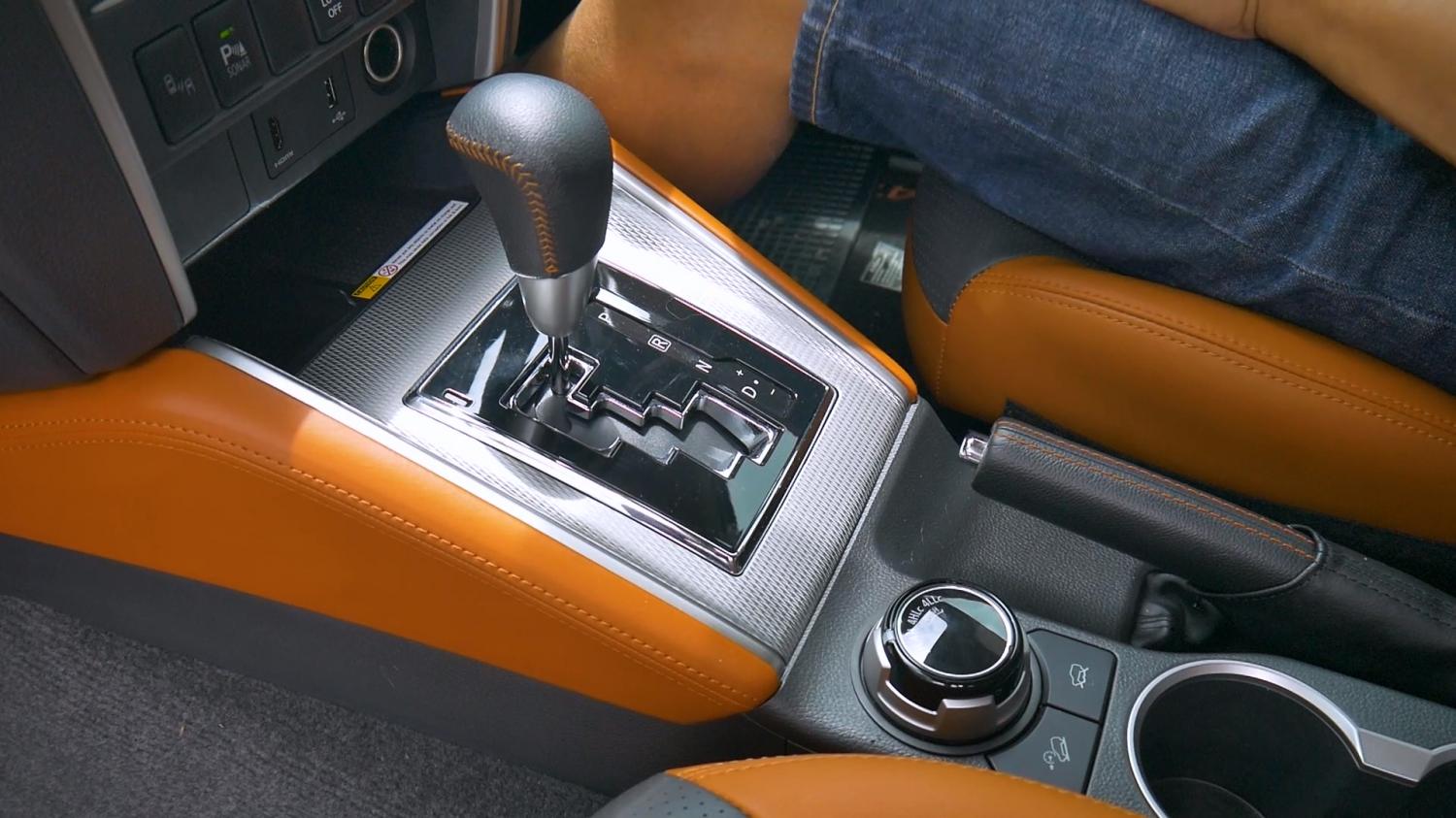 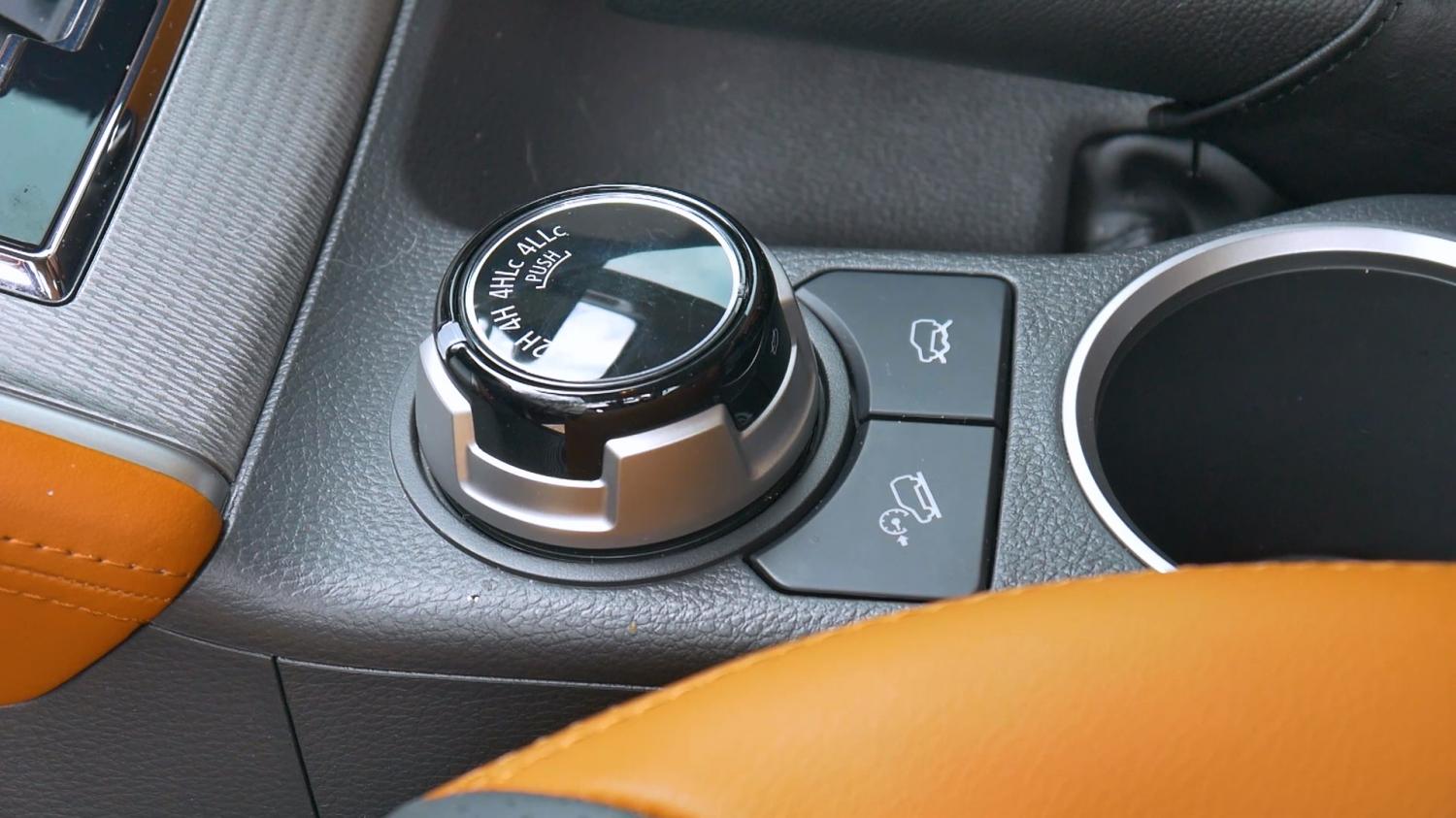 Sitting at the top of the Triton range in Thailand is the Double Cab Athlete, which is available in both two- and four-wheel-drive variants. In this review, we drove the Triton Double Cab 4WD Athlete AT, which retails at 1,196,000 baht. Meanwhile, the two-wheel-drive version (Triton Double Cab Plus Athlete GT AT), which comes with lower equipment levels, offers significant savings thanks to its 1,005,000 baht price tag.

The current Triton is the fifth L200 generation, which has been around for quite a while, with the latest facelift taking place in 2019. The main changes include the front end which features a teardrop design similar to other Mitsubishi models, such as the Pajero Sport and Xpander (some will love it and some will hate it).

Mitsubishi pickups tend to have a futuristic design (remember the Strada?) and the Triton is no exception. The front end is super fancy and looks like something you'd expect from a Ridley Scott movie. The glossy black radiator grille looks super attractive, adding a sporty touch to the modern-looking front end. There's also a front skid plate below the bumper. Lighting consists of auto-switching Bi-LED headlamps as well as daytime running lights and foglamps up front, and LED tail lights with Light Guide at the back.

The glossy black theme continues to the roof, styling bar, mirror caps, door handles and part of the steel side steps and rear bumper, adding to the sportiness. The black alloy wheels are also good-looking and mated to 265/60R18 all-terrain tyres. The Athlete graphics towards the rear end finishes the job nicely. 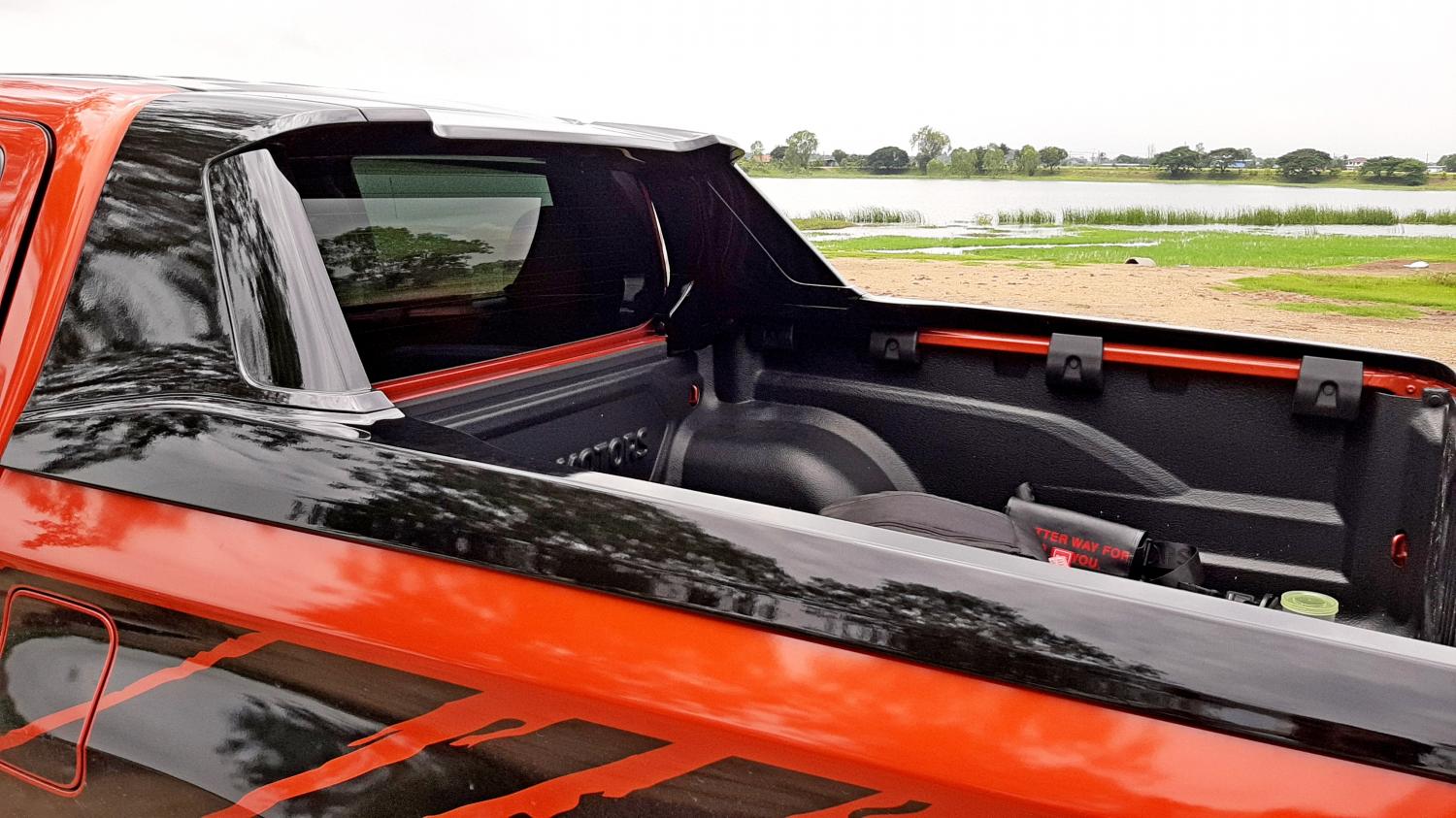 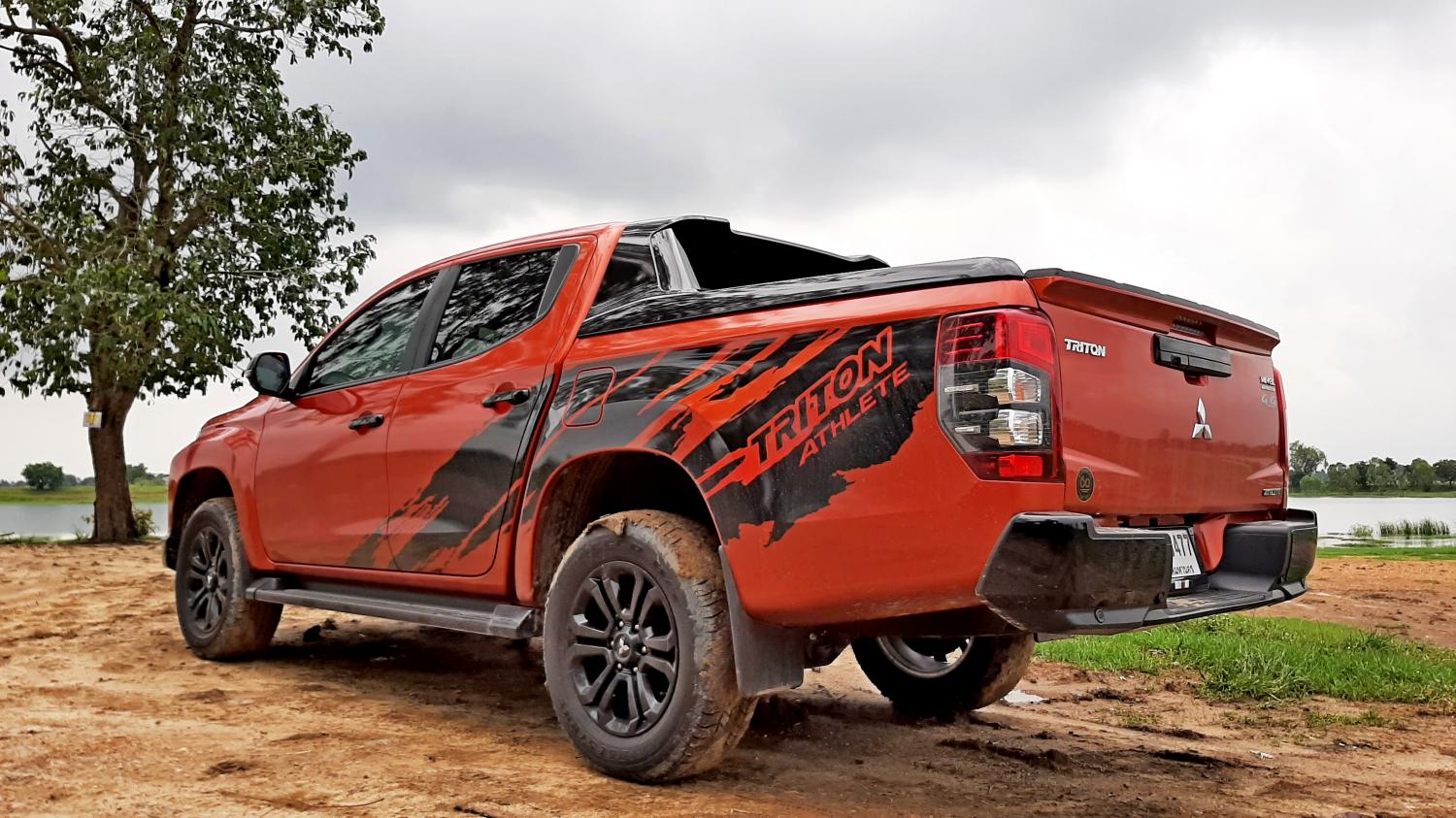 At the back, the tailgate comes with additional gas struts that make opening and closing less energy-consuming. The rear bumper also comes with anti-slip surfacing for easy access to the pickup bed.

The interior of the Triton isn't among the most luxurious, although the special upholstery package (real/synthetic leather) does stand out. The driver's seat comes with 8-way power adjustment and in general both front and rear seats offer pretty good support, although there isn't much legroom for rear passengers. They do get a centre armrest with cupholders and it feels more comfortable than in a Ford Ranger.

There aren't many soft-touch areas (just a little on the door panel and centre tunnel), but the silver trim around the gate-type automatic gearshift lever looks neat.

The instrument panel is analogue, with a small colour multi-information display located between the speedo and rev counter. The four-spoke multi-function steering wheel is leather-wrapped and the controls are easy to use, and there are also shift paddles for the six-speed auto as well.

The 7-inch centre touchscreen is smooth and easy to use although the image quality from the 360-degree camera is just mediocre. You do get guiding lines that help when backing up into tight spaces. There are both Apple CarPlay and Android Auto.

There are three USB ports around the cabin and two 12V outlets. There are no sunroof options, so the unique-looking rear air vents could be positioned on the ceiling. 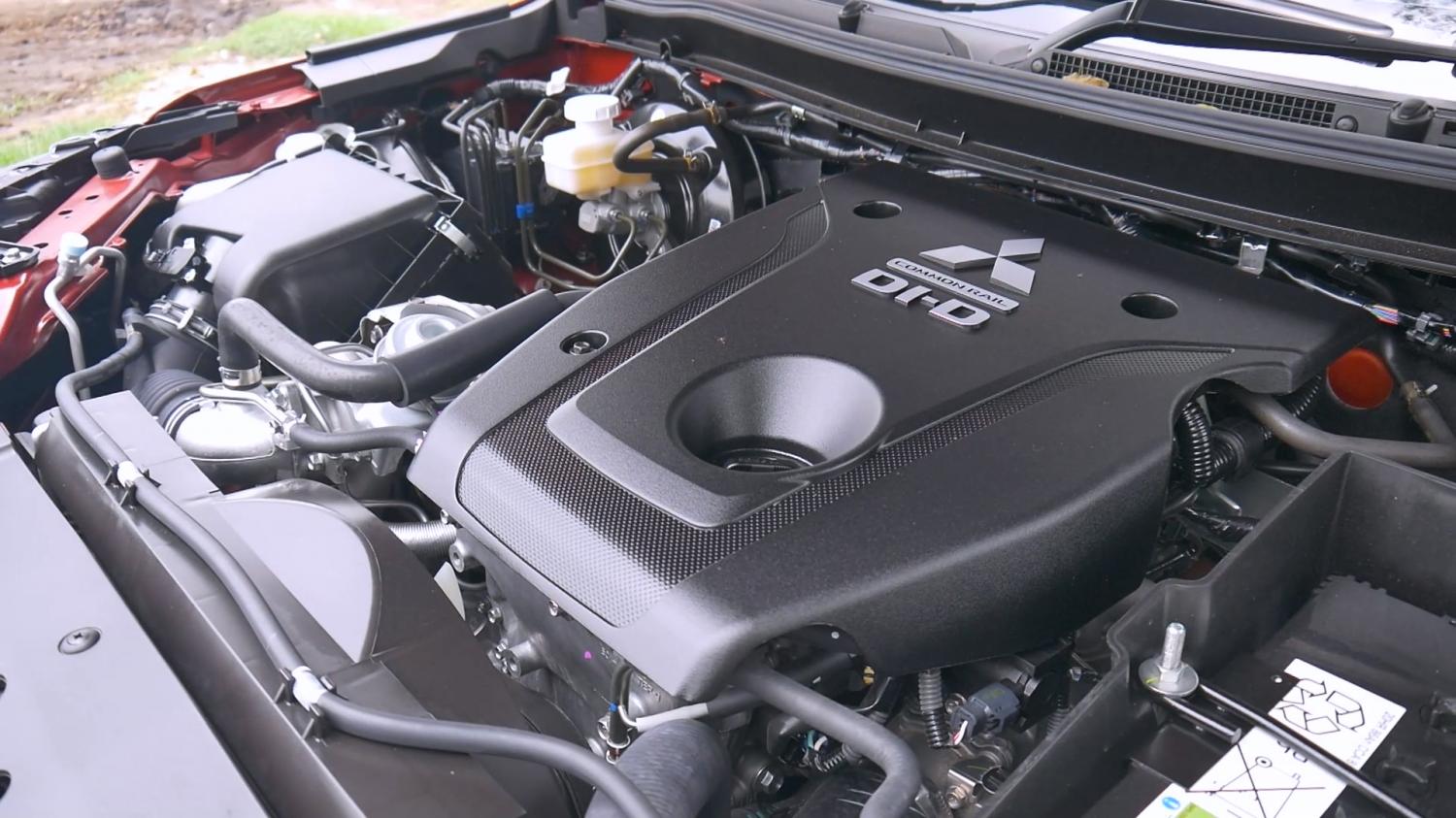 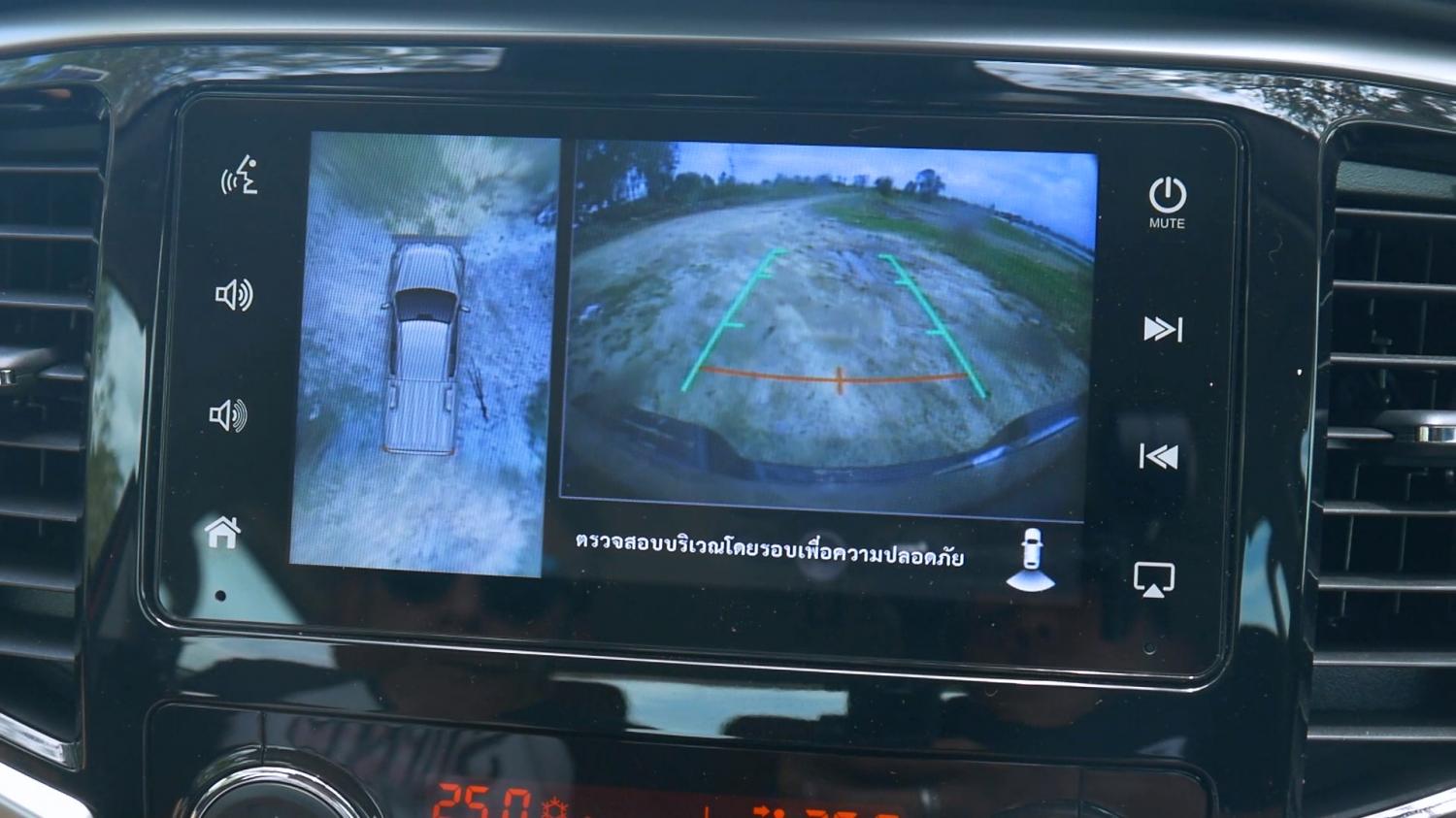 The Triton Double Cab is powered by a 2.4-litre MIVEC diesel engine with variable geometry turbocharger mated to a 6-speed automatic transmission plus a dedicated 4WD system.

Maximum engine output is claimed at 181hp at 3,500rpm while maximum torque is 430Nm at 2,500rpm, both of which are lower than rivals, particularly the Ford Ranger and Toyota Hilux Revo that offers above 200hp and 500Nm.

The automatic transmission features manual mode as well as sport mode that gives you the most out of the engine when propelling the 1,987kg, 5.3m truck. Average fuel economy is 13.2kpl (according to Eco Sticker).

While its engine may not deliver class-leading performance, the Triton comes with a reasonably good four-wheel-drive system.

The Super Select 4WD II system in the Triton has four settings:

The suspension, comprising double wishbones up front (with stabiliser) and leaf springs at the rear, offers decent ride quality for a big pickup. It's easy to notice that the front dampers have been tuned to provide a smooth low-speed ride in the city, given those road conditions are fairly good.

But as you run into undulations including potholes and speedbumps, the rear leaf springs take over and the Triton starts to get bouncy, especially when driving without any heavy loads in the pickup bed.

The 220mm ground clearance and the front skid plate help when going off-roading or simply when driving through floods (which isn't a rare occasion considering the past weeks in Thailand). 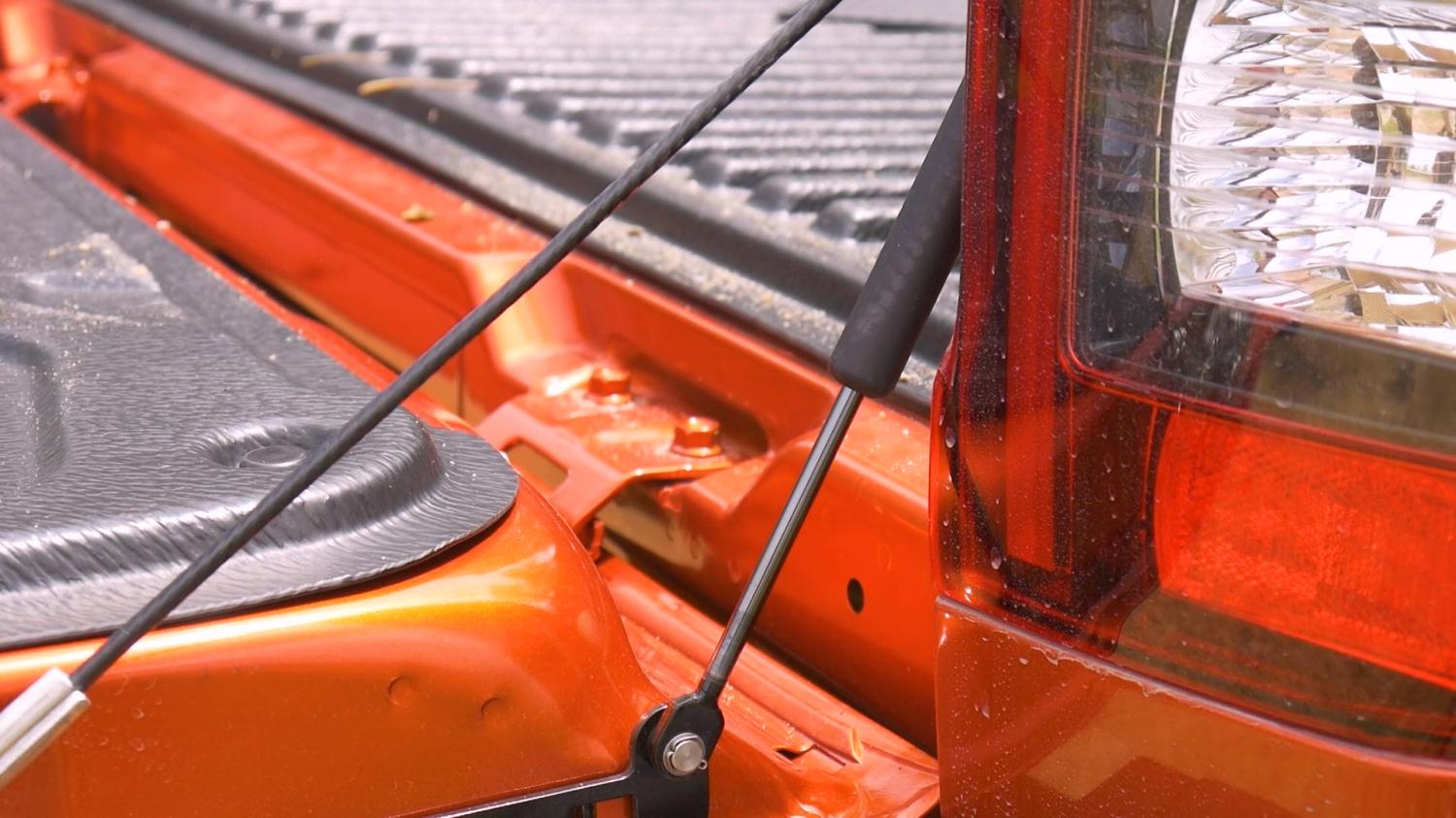 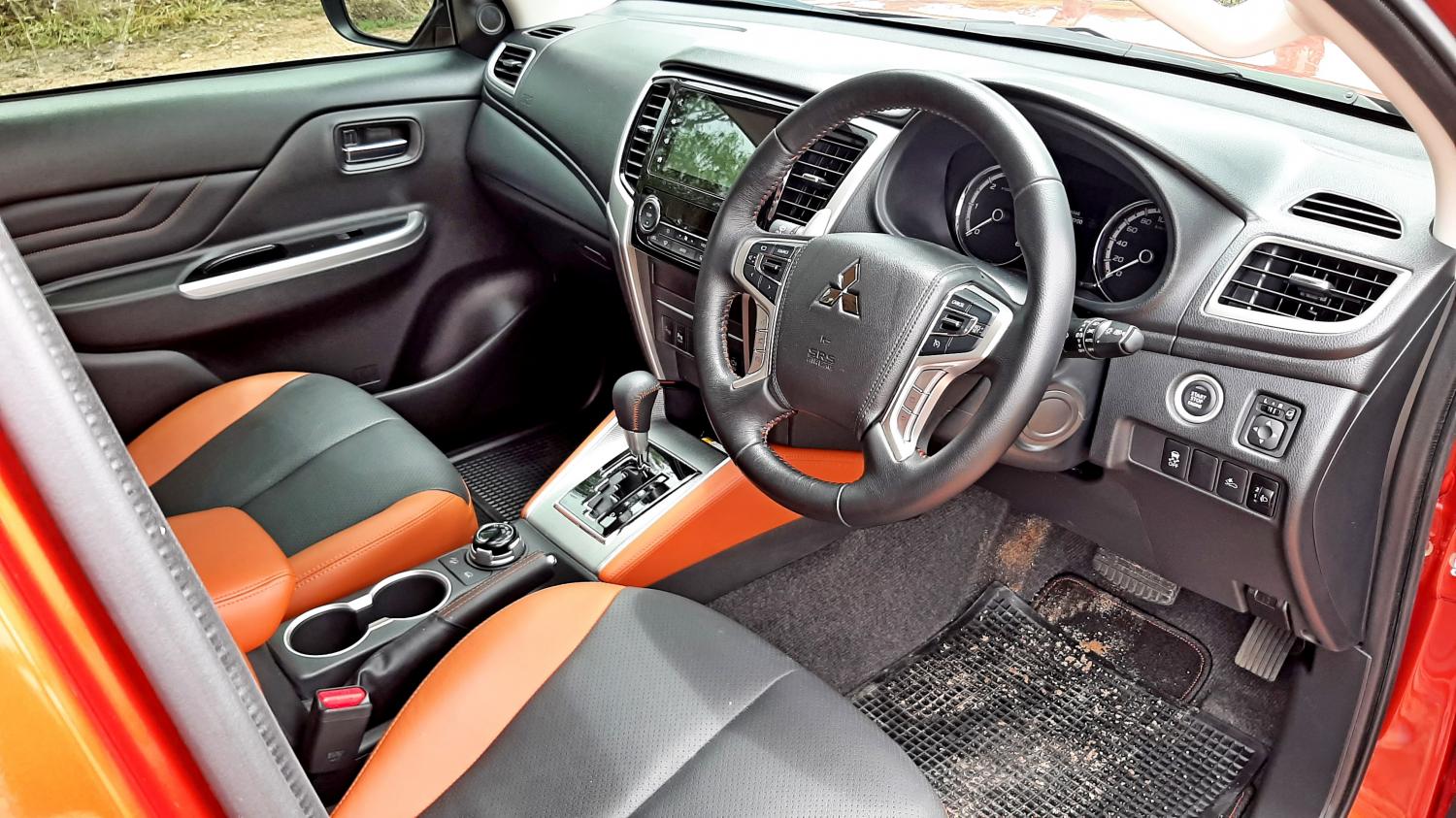 While Mitsubishi isn't the top-selling brand in the market, it does have a strong following and the Triton Double Cab 4WD Athlete is their best shot at giving this pickup improved packaging and a better chance to compete in the hotly-contested sector.

And as mentioned, those who aren't into four-wheel-drive and intelligent safety can save up to 191,000 baht by going for the two-wheel-drive variant that also comes with the attractive Athlete package. 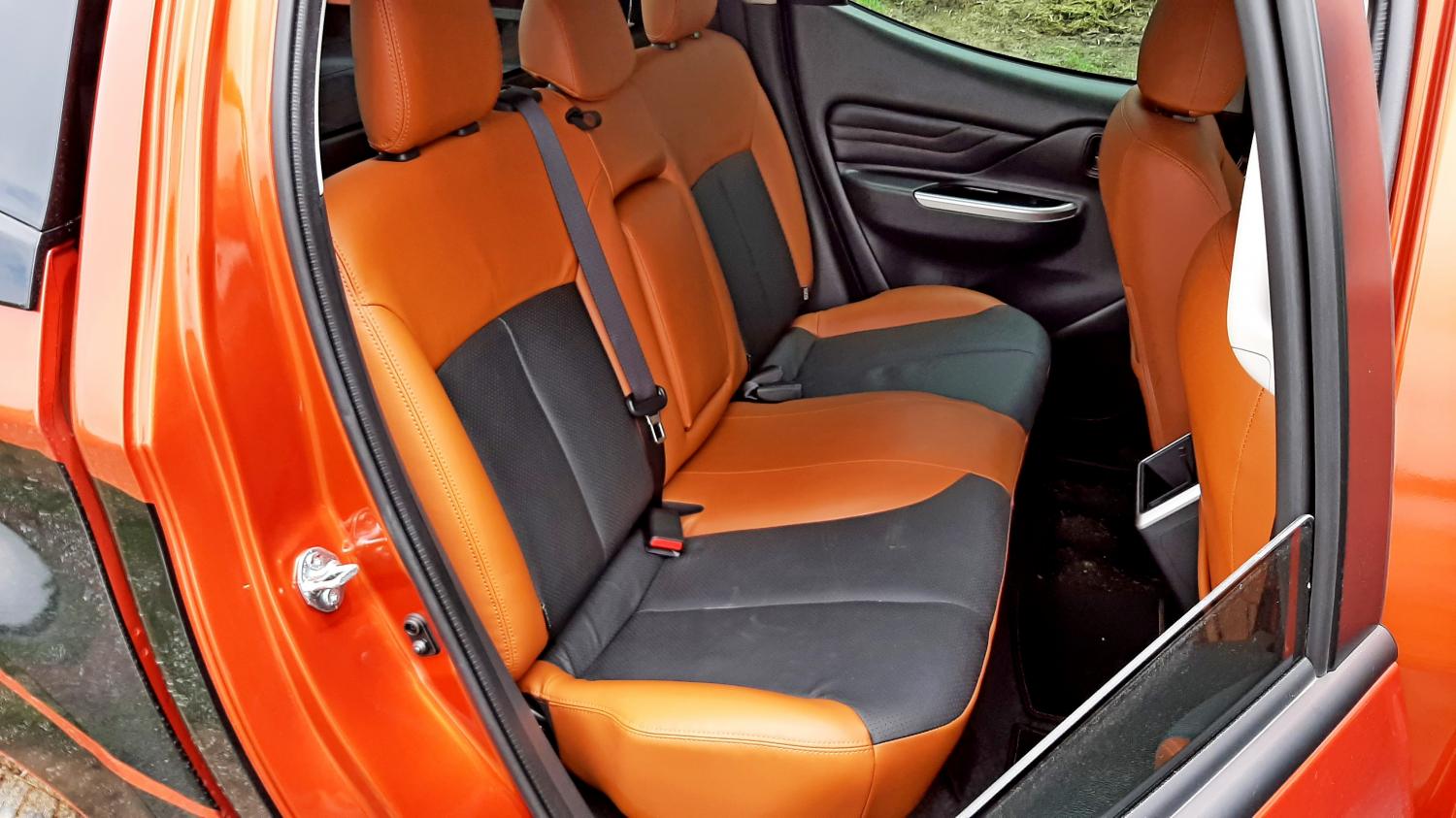 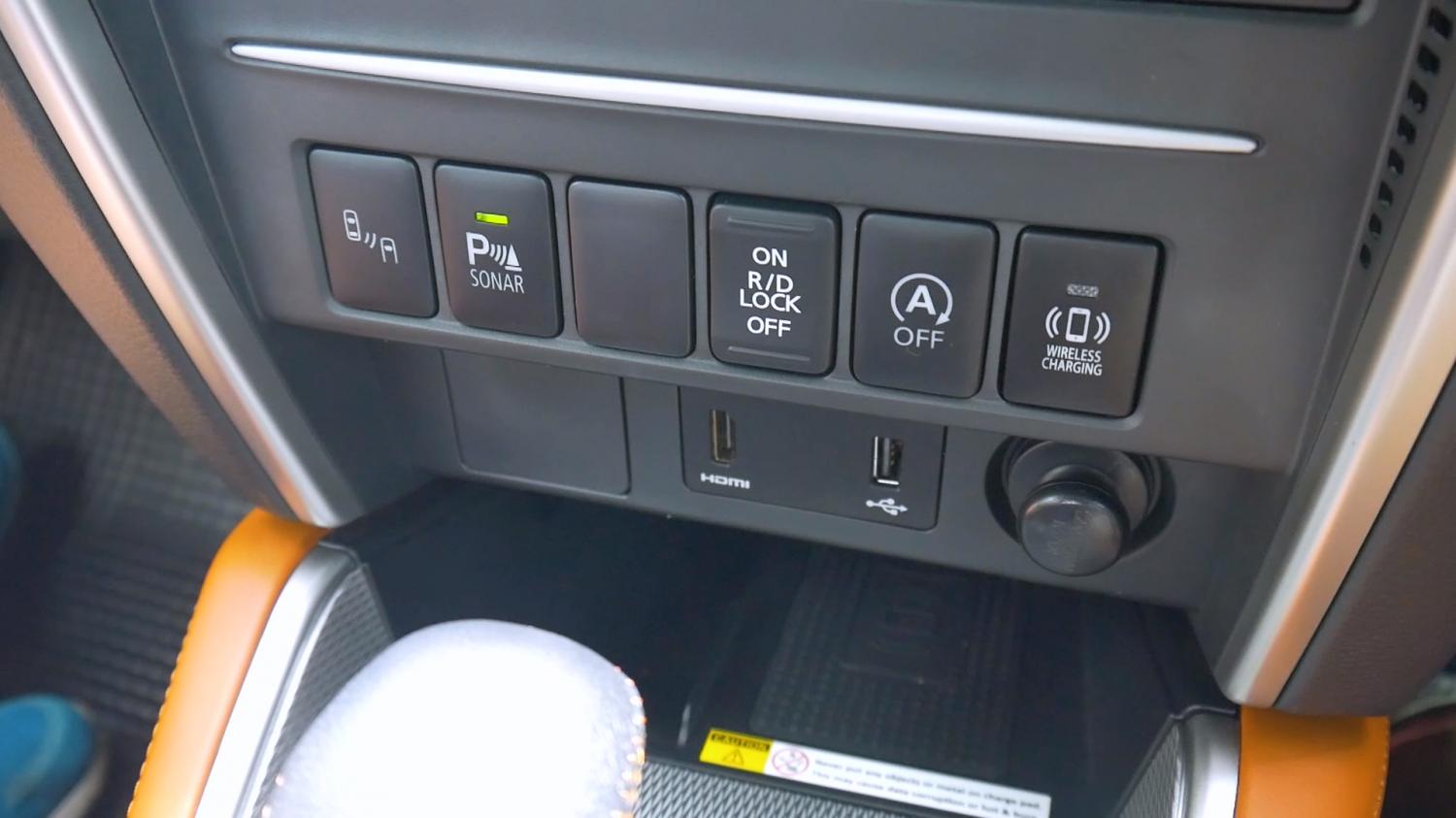 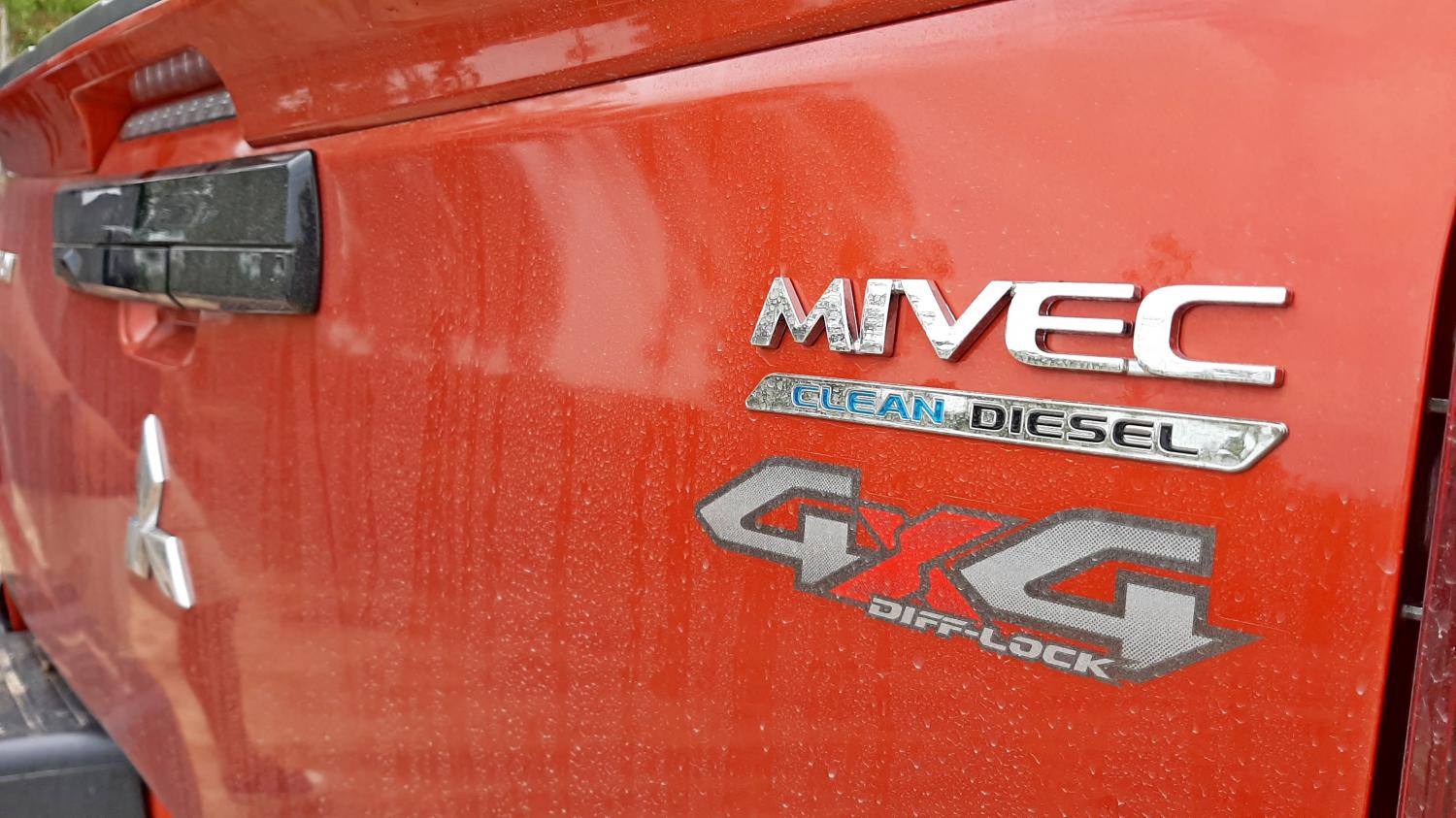 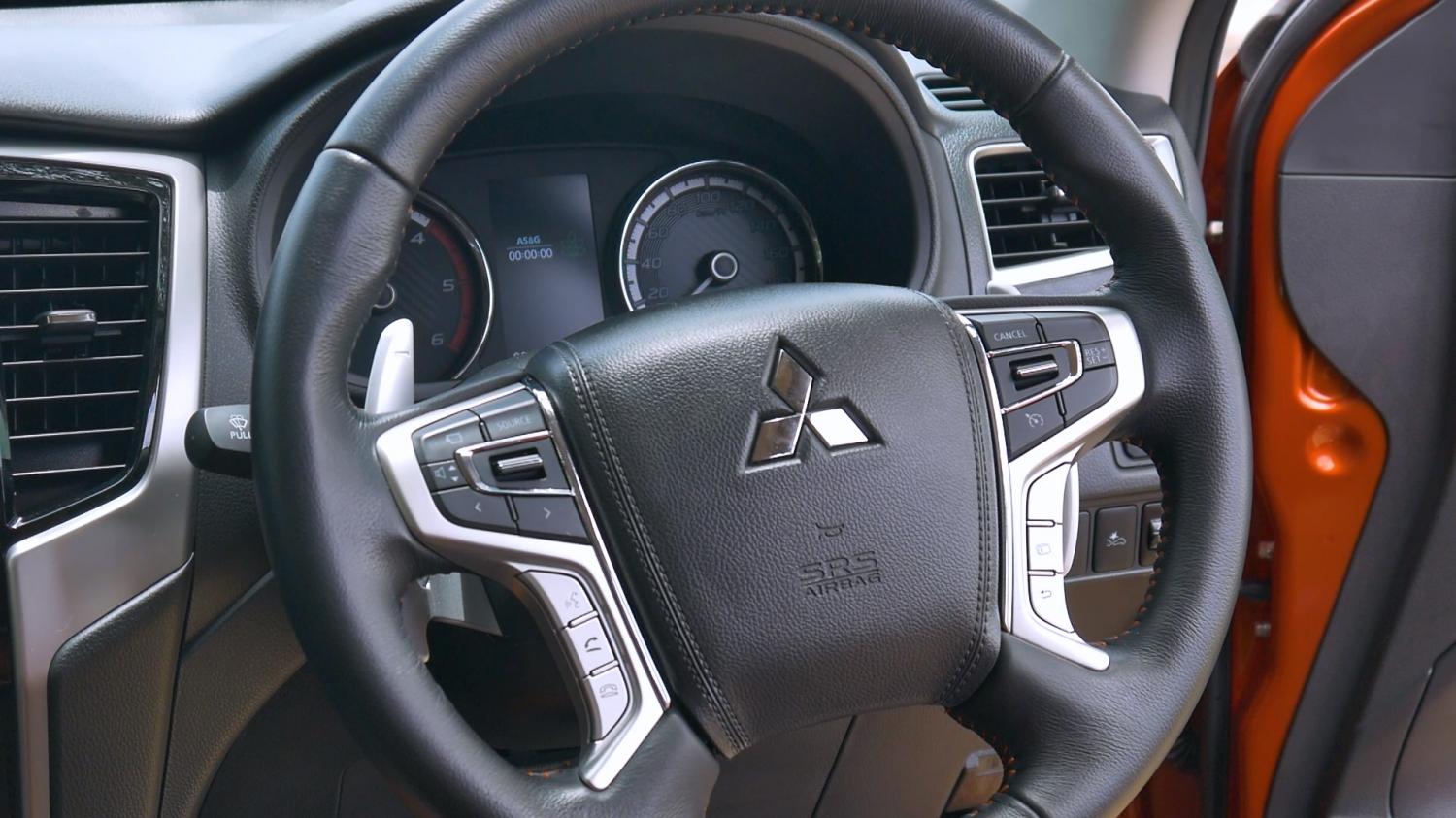 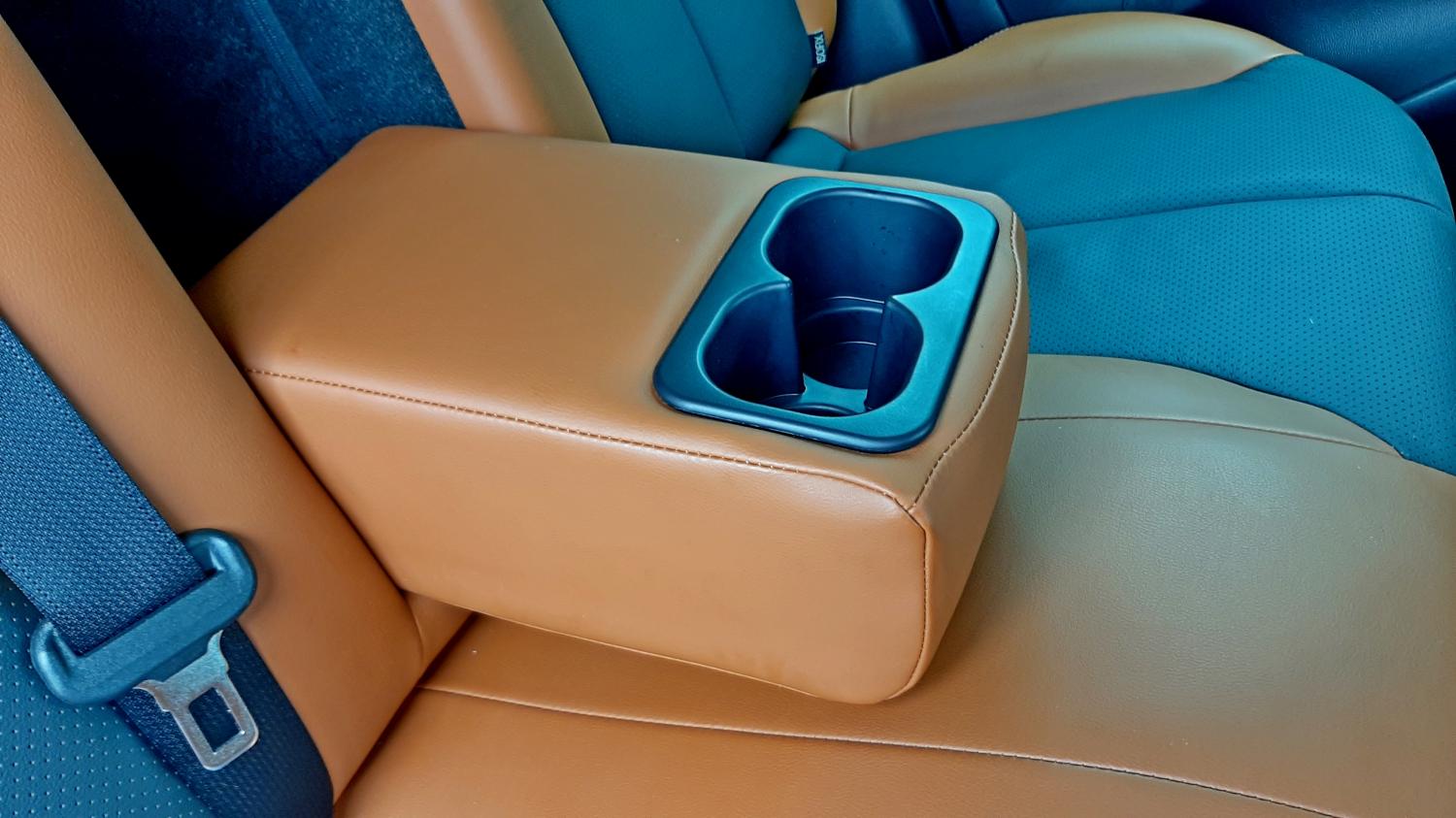 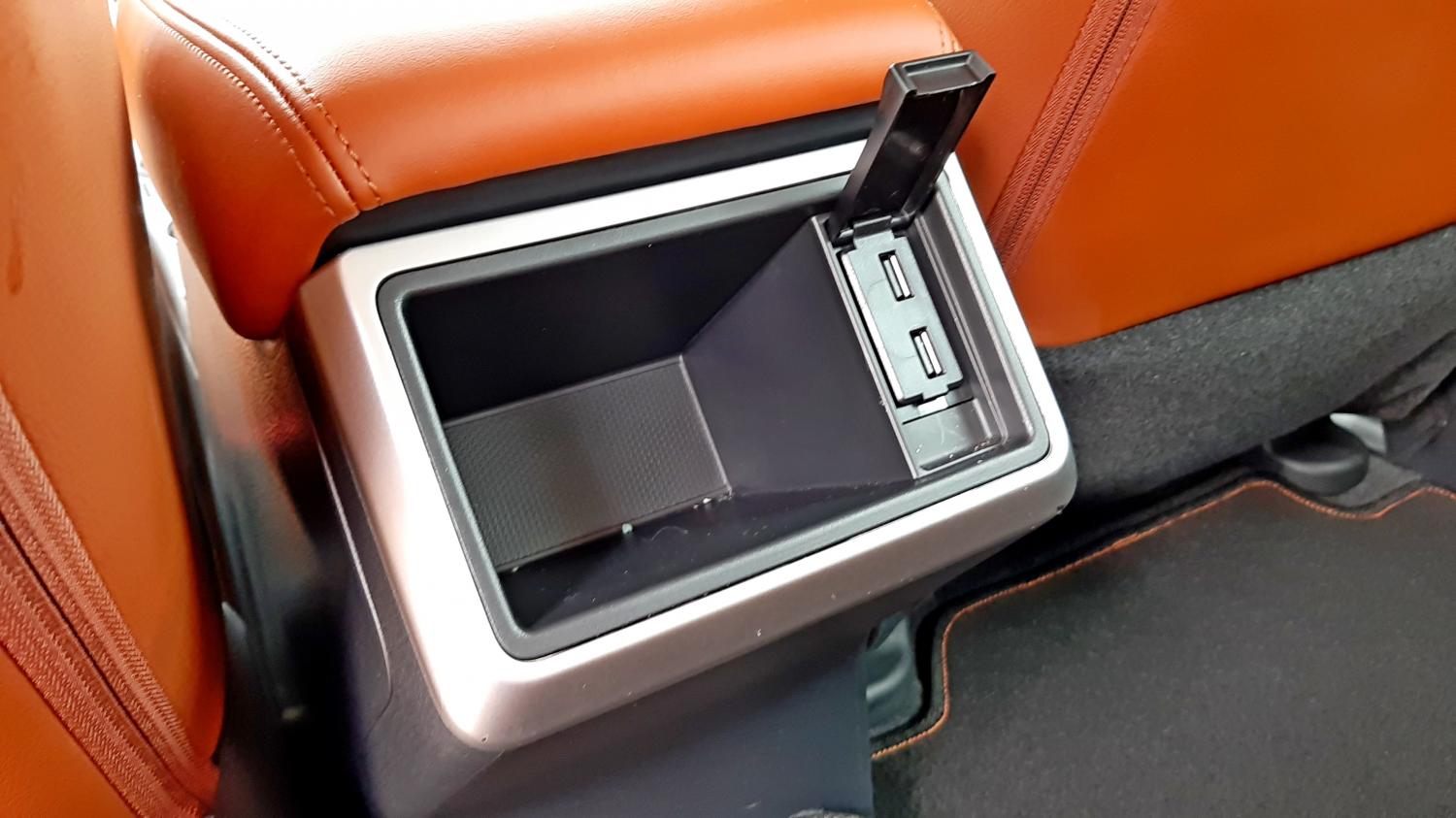 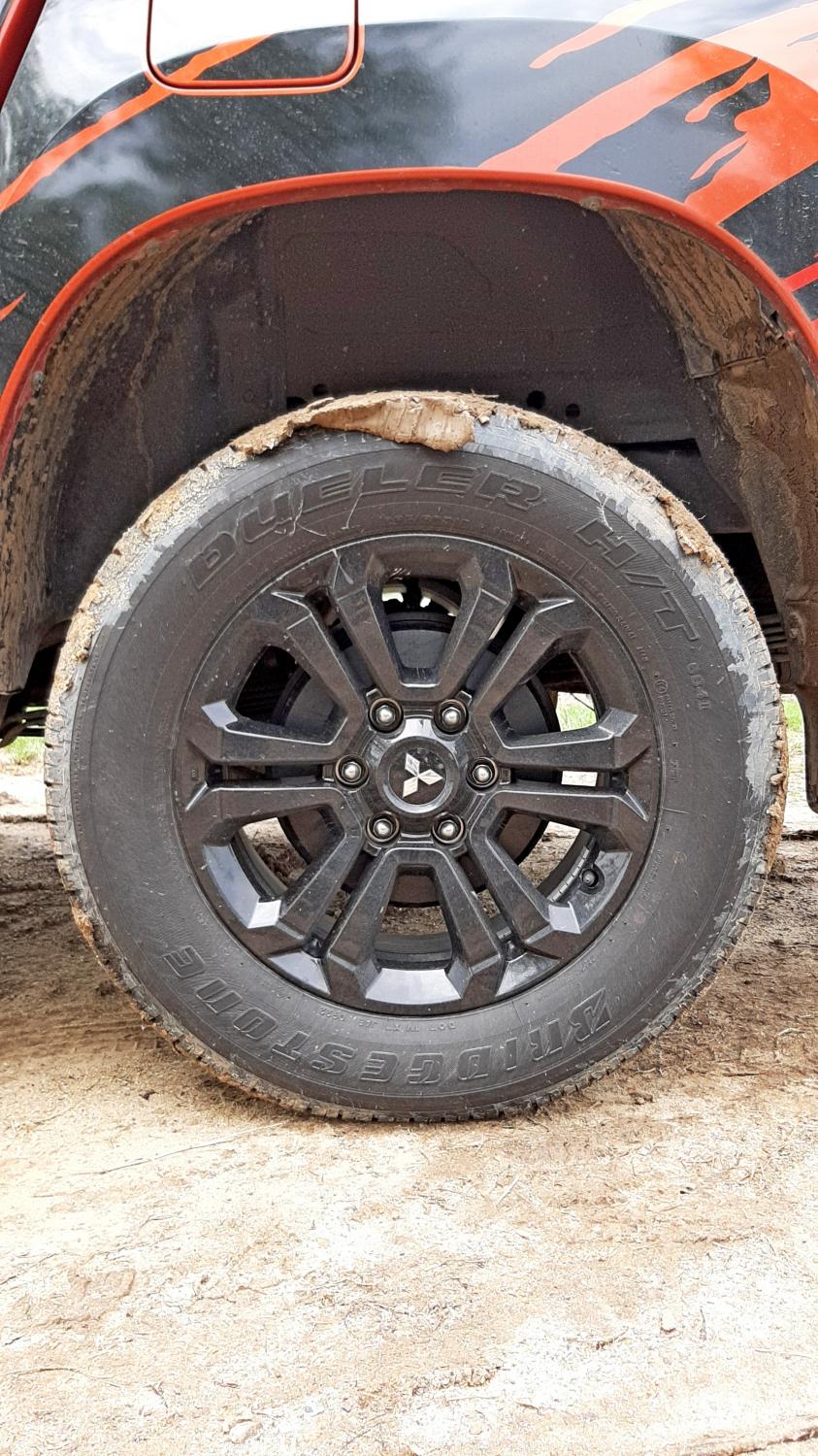