Motor Expo returns with a balance between high-performance and economy

A total of 35 automobile and 17 motorcycle brands are taking part in this year's Thailand International Motor Expo, currently being held at Impact Challenger Muang Thong Thani. 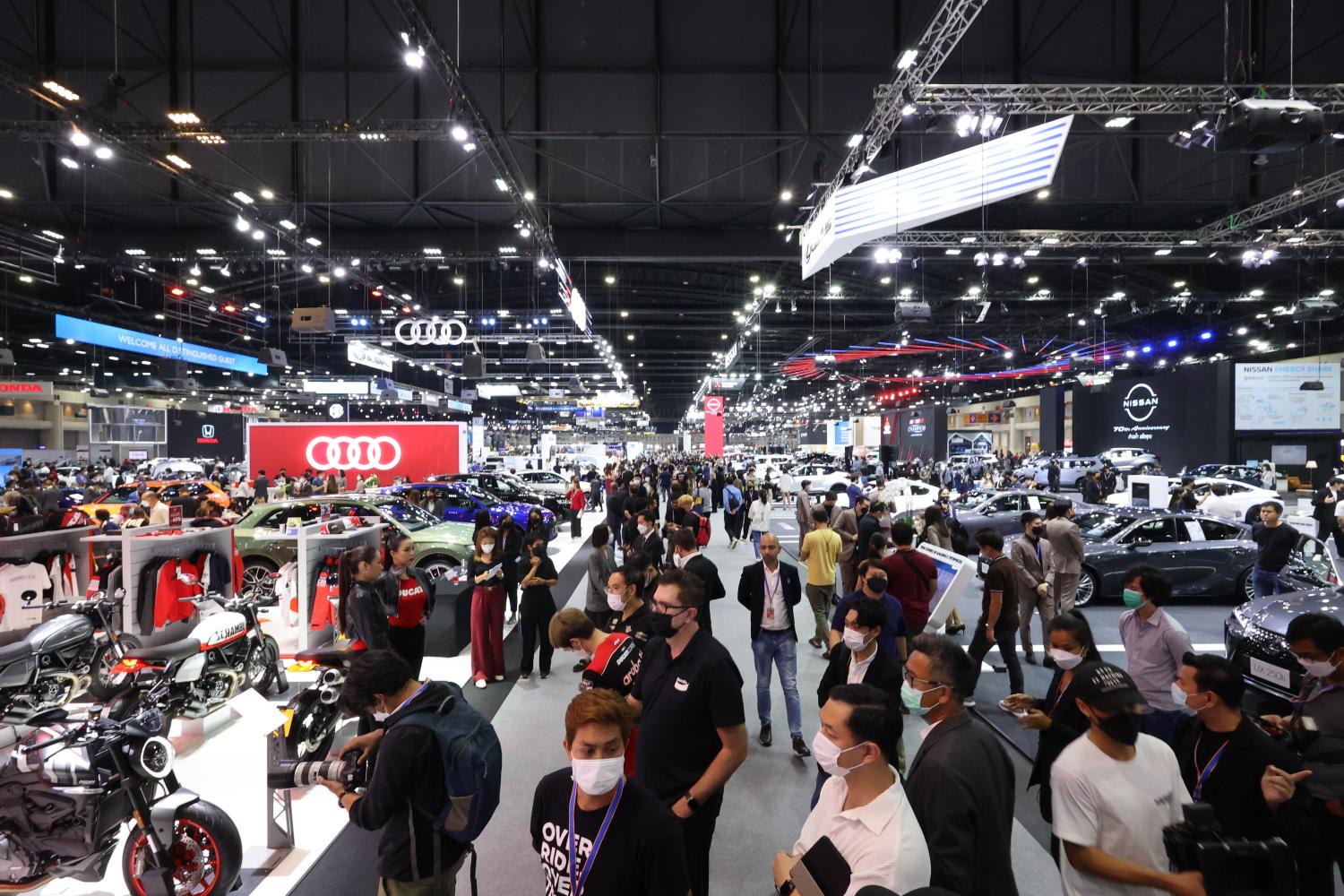 The event's 39th incarnation goes on until Dec 12, and is an important stimulant for the automobile market as it coincides with the year-end car-buying season.

Apart from a large number of new models and those with a minor change, numerous electric vehicles are being introduced at this year's show. Here are our top picks: 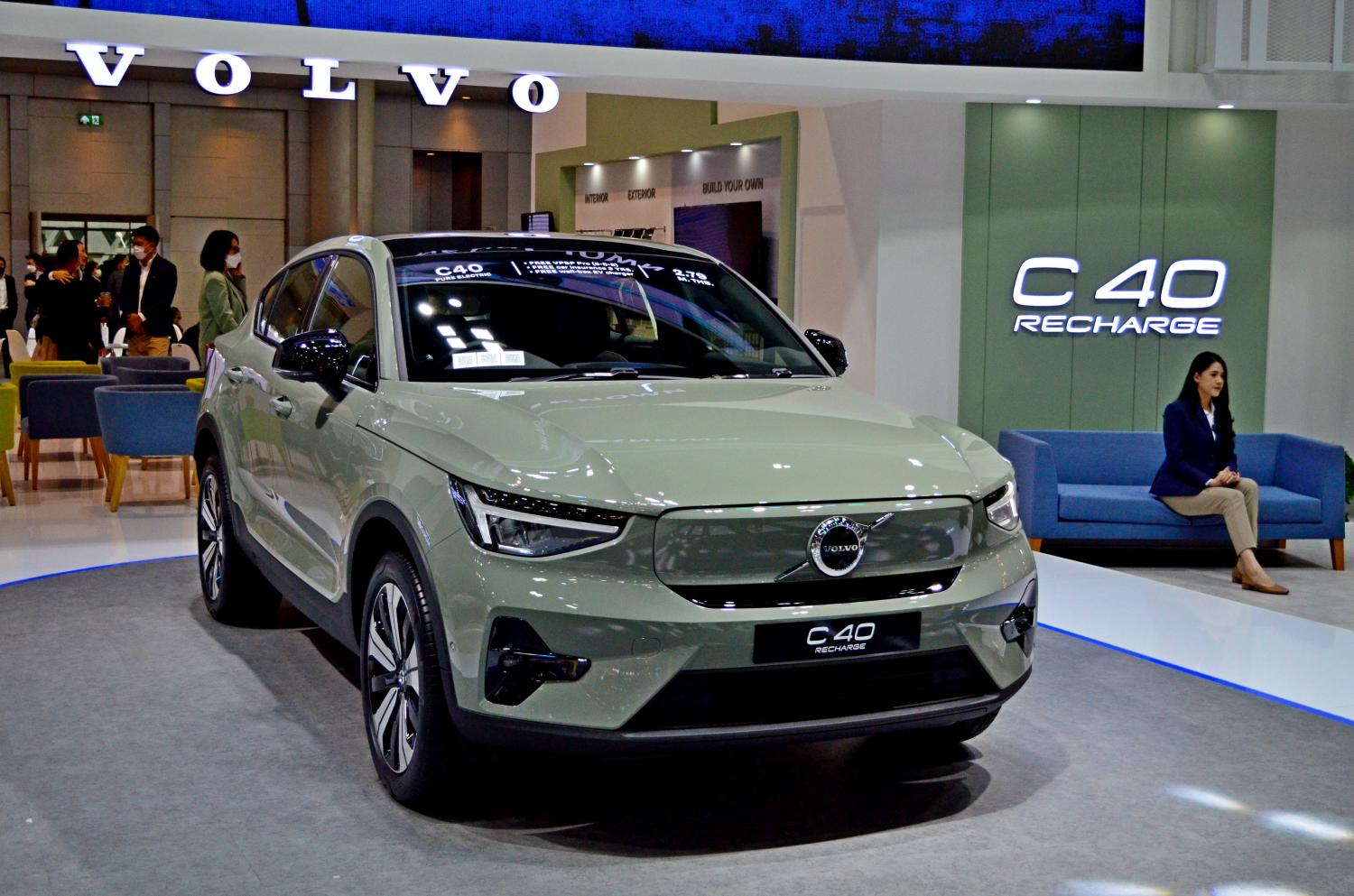  Volvo is expanding its EV range in Thailand, with the latest addition being the C40 Recharge Pure Electric crossover coupe, priced at 2.79 million baht. 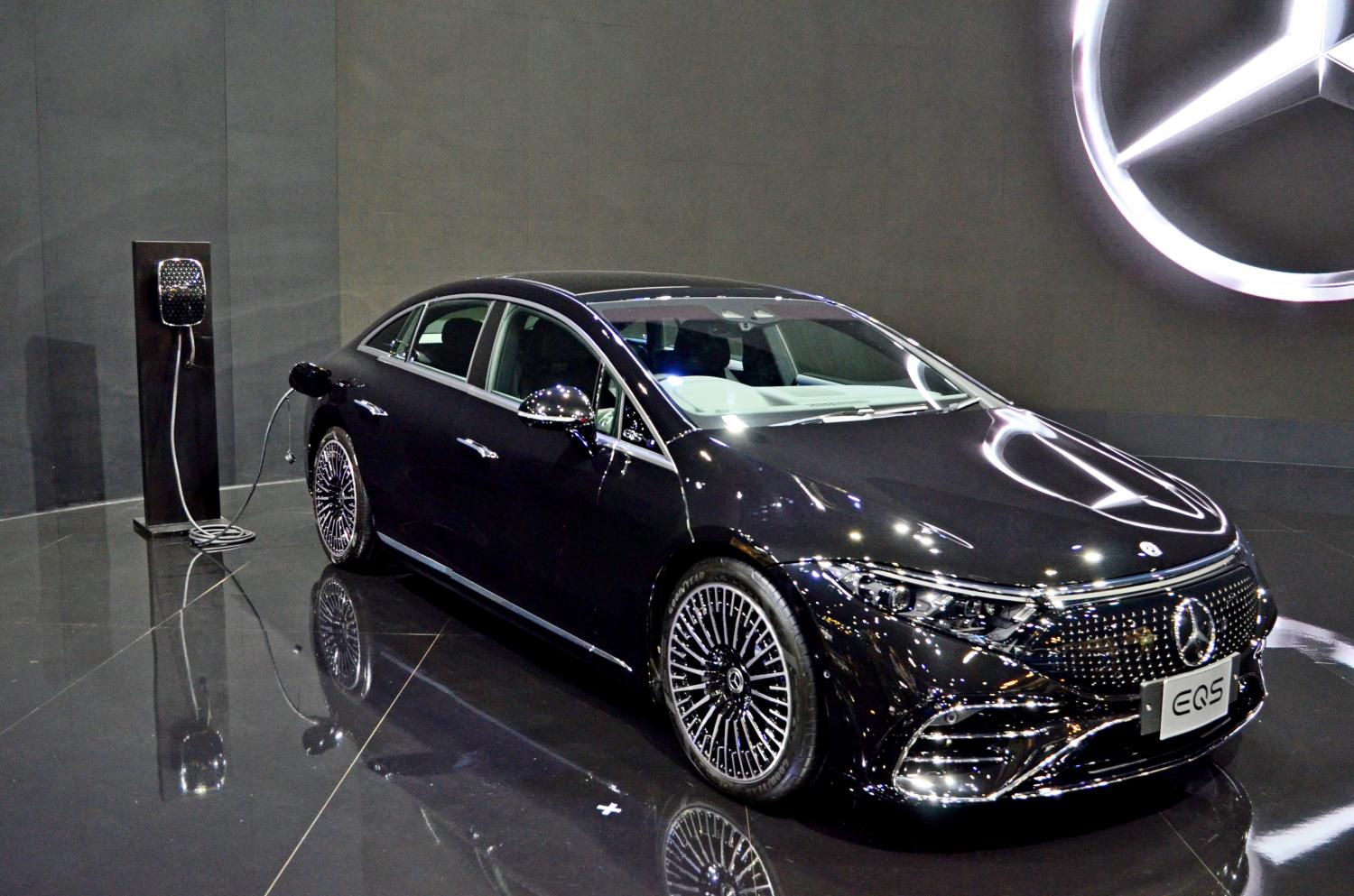  The EQS 500 is priced at 7.9 million baht and is the first all-electric vehicle from the Mercedes-EQ brand that is locally assembled.

It's powered by two electric motors delivering a combined output of 449 hp and a maximum torque of 828Nm. Acceleration from 0-100kph takes 4.8 seconds while the top speed is claimed at 210kph.

According to Mercedes, the large capacity 108.4 kWh battery provides a range of up to 702km (WLTP), allowing the EQS 500 to be driven upcountry without having to stop for recharging. 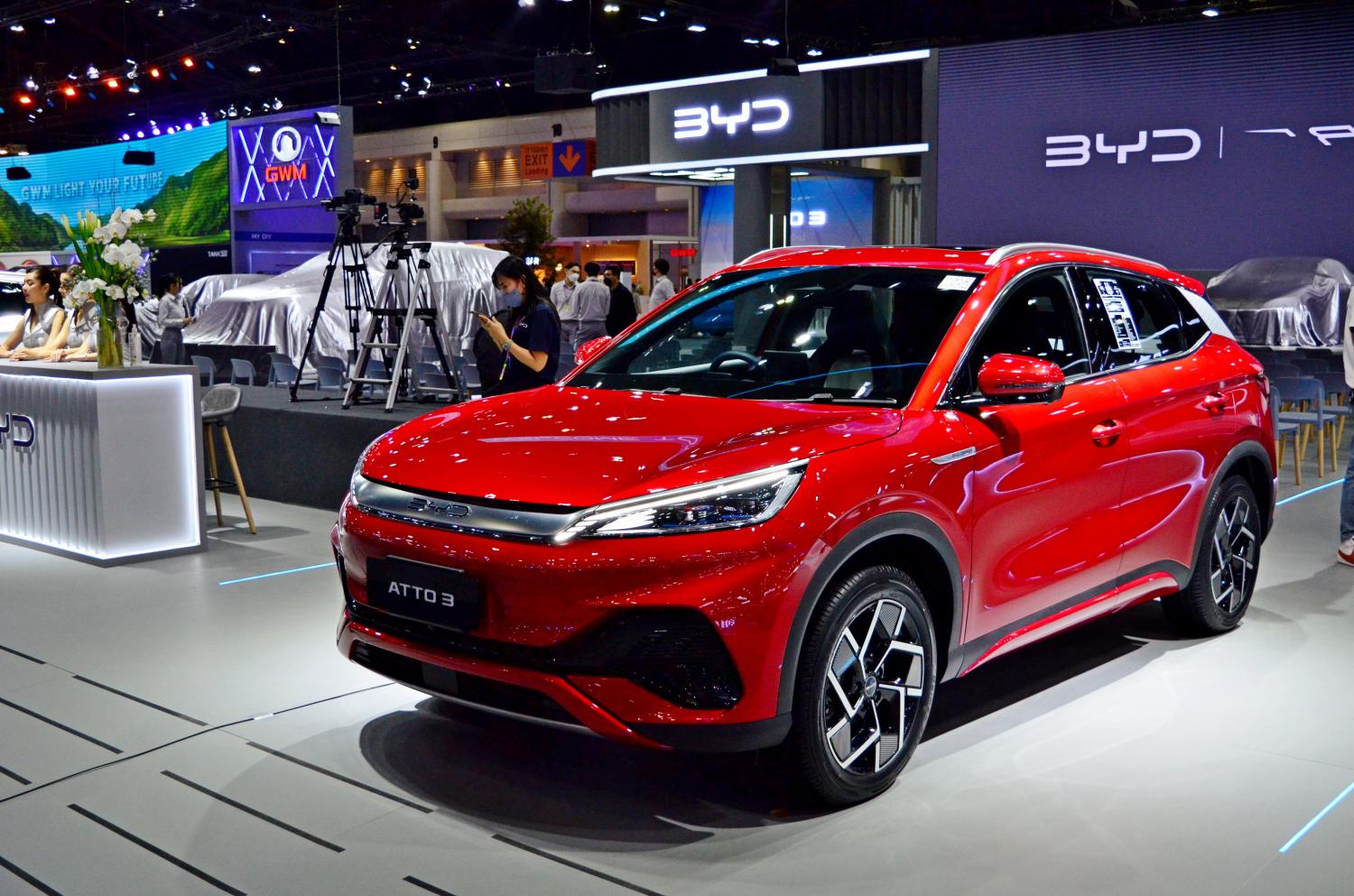  Chinese EV specialist BYD is showing off a total of seven models at the Motor Expo, although the ATTO 3 is the only model that is currently for sale, with more than 5,000 orders having been placed already.

The ATTO 3 features both types of charging -- AC Type 2 connector and 80kW DC-CCS 2 connector. Vehicle to Load provides up to 2.2 kW of power for external use. 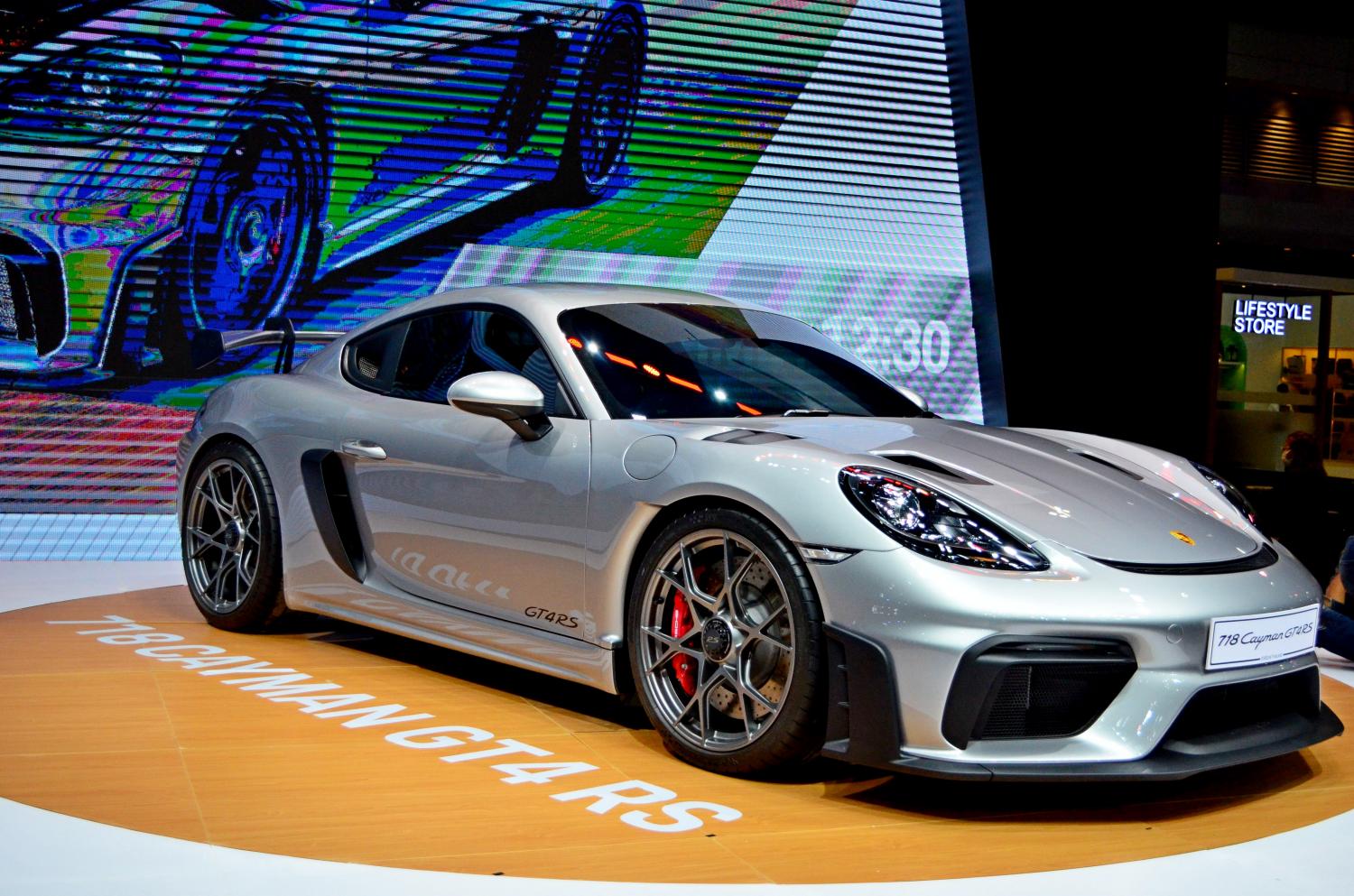  The highlight at the Porsche booth is the flagship model from the 718 family that's built for maximum performance on the track.

The heart of the 718 Cayman GT4 RS, priced at 15.8 million baht, is the naturally-aspirated flat-six engine taken from the 992-generation 911 GT3 capable of pumping out a whopping 500hp and revving to 9,000rpm.

There's plenty of weight saving and aerodynamics for this model, which weighs in at 1,415kg and is claimed to have excellent cornering performance whether on winding mountain roads or on the circuit. 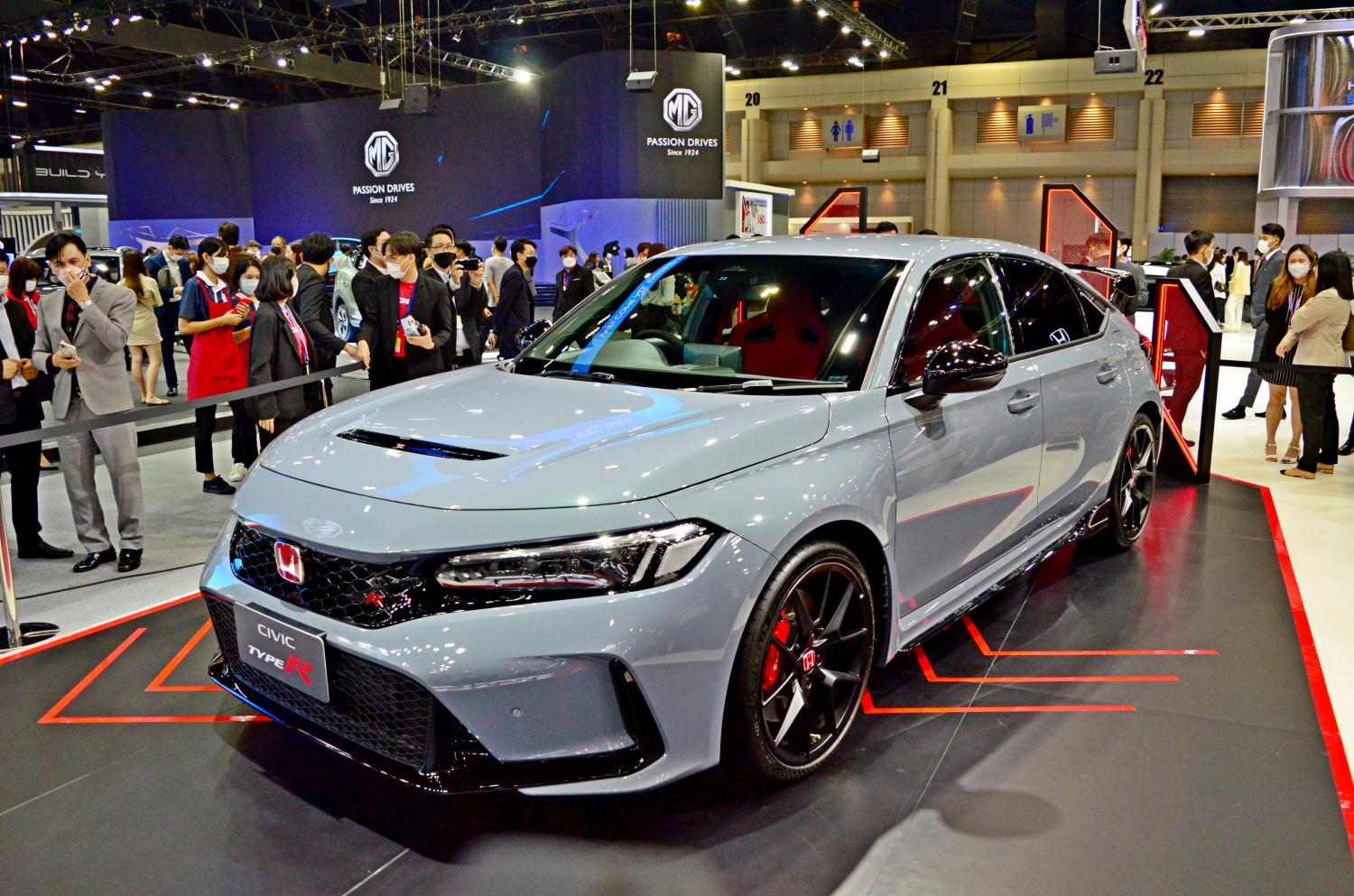  Honda is showcasing its Civic Type-R high-performance model at the Motor Expo, but unfortunately, no pricing has been announced.

The Civic Type-R is based on the 11th-gen Civic and features a 5-door hatchback body style. The 2.0-litre VTEC Turbo engine is capable of developing 330hp and 420Nm, and mated to a six-speed manual transmission with auto blipping on downshifts and a mechanical limited-slip differential. Acceleration from 0-100kph takes 5.4 seconds and the Civic Type-R is capable of reaching a top speed of 275kph.

The model on display is equipped with 19-inch alloy wheels, and a four-mode drive system (Comfort, Sport, +R, and Individual modes), along with Honda SENSING intelligent safety technology. 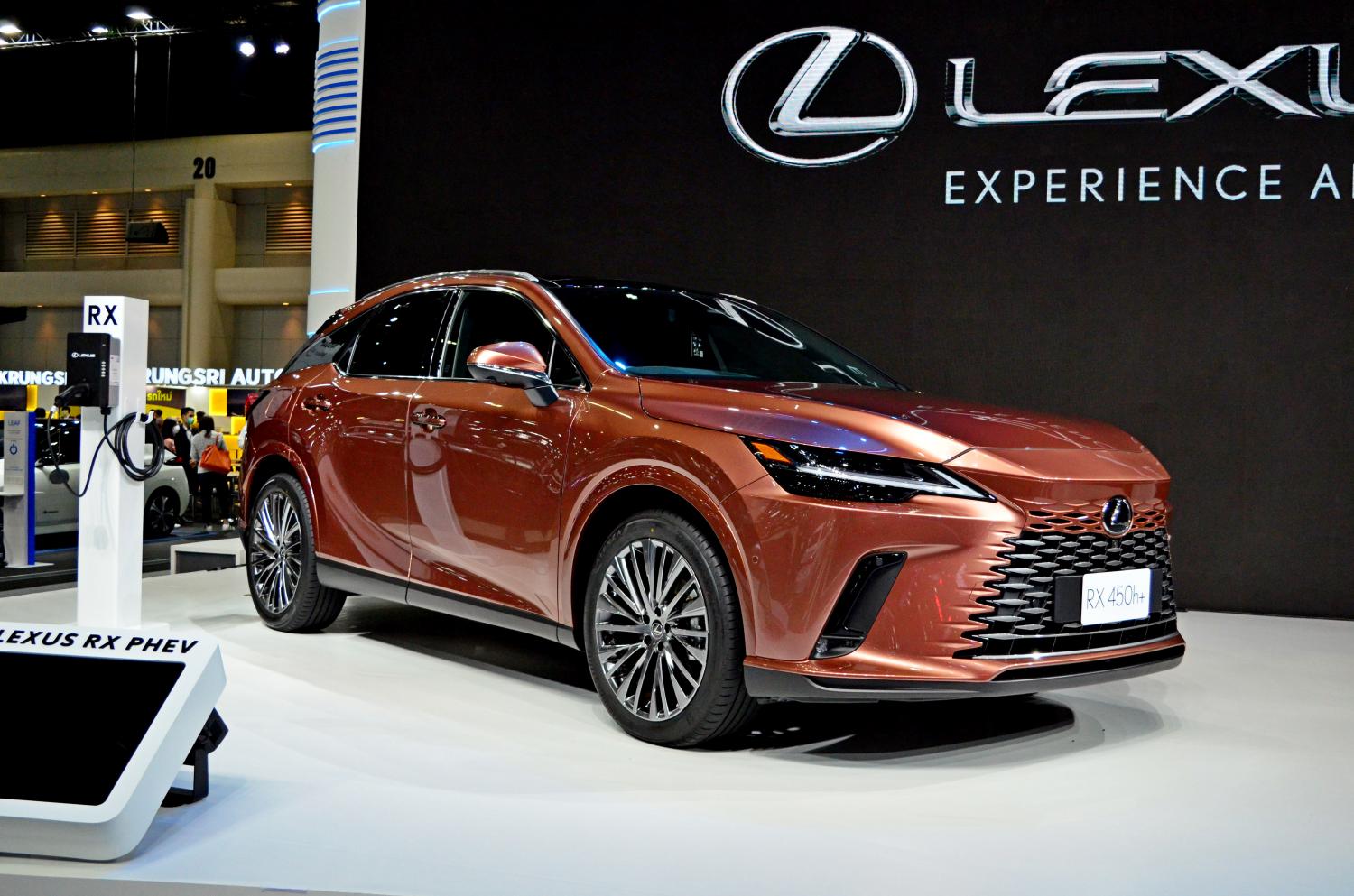  The Lexus RX 450h+ is available in two trim levels priced from 4.64 million baht (Luxury) to 5.09 million baht (Premium). It boasts a solid stance thanks to an extended wheelbase plus wide front and rear treads resulting in a low centre of gravity.

Both variants are all-wheel-drive with power coming from a 2.5-litre petrol engine with 182hp/227Nm plus two electric motors (front and rear). The system output is claimed at 304hp.

 More than 1,500 orders were placed for the MG4 EV during the first eight hours of launch in mid-November, which shows how popular this model is. Prices range from 869,000 baht for the D trim to 969,000 for the X trim.

The MG4 is a rear-wheel-drive EV with 170hp and 250Nm offering quick acceleration, while the 51kWh battery delivers a range of 425kms (NEDC).

With a 50-50 front-rear weight distribution, short front and rear overhangs, and a low centre of gravity, the MG4 offers sporty driving characteristics, and also comes with full advanced safety. 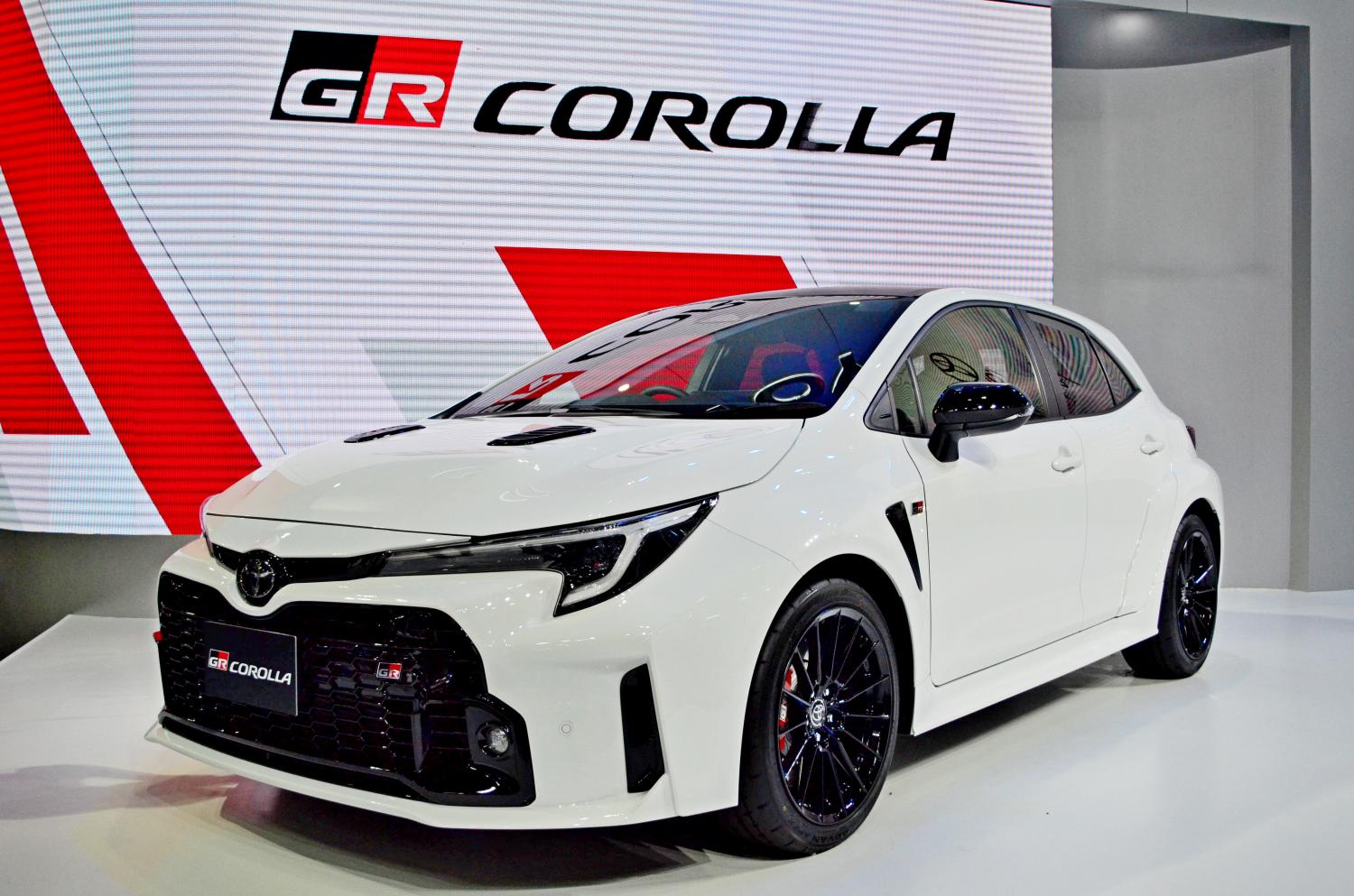  Toyota is displaying its latest model from the Gazoo Racing stable and this time the Corolla hatchback gets a lightweight and compact G16E-GTS turbocharged, direct/port-injected three-cylinder engine, capable of pumping out 300 horsepower and 370Nm of torque.

Engineered for snappy acceleration out of the corners, output hits peak torque at 3000-5500rpm, with max horsepower coming at 6500rpm. Its thrill-inducing power is piped through a unique triple exhaust that's designed to reduce backpressure for maximum power delivery.

The G16-E engine is paired with Toyota's rally-developed GR-Four AWD drivetrain. This system gives drivers a choice of 60-40, 50-50, or 30-70 power distribution to the front and rear wheels. GR Corolla is offered exclusively in a manual transmission, staying true to its hands-on rally racing roots. 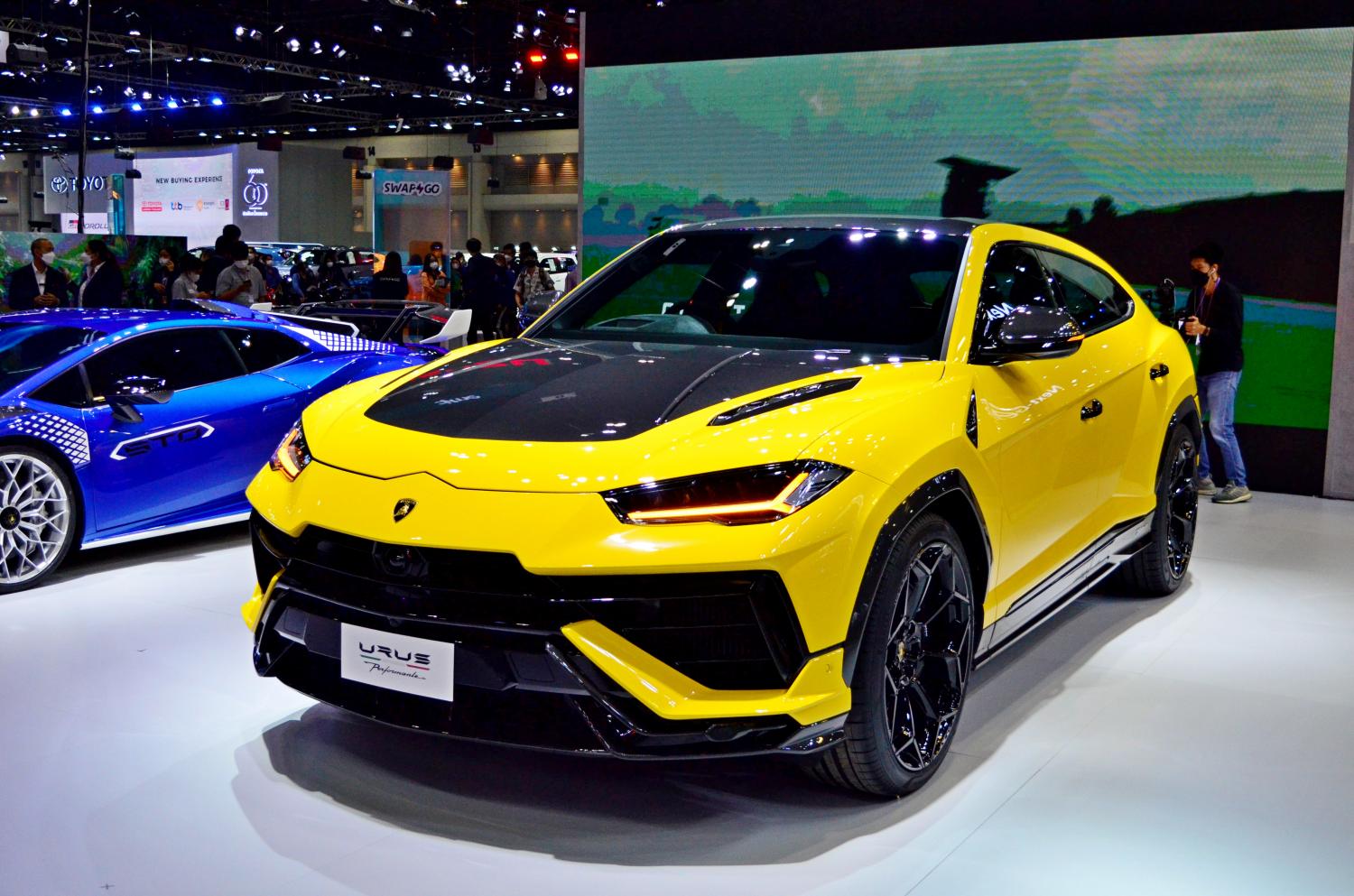  This is the performance-enhanced version of the most intimidating SUV of all -- the Lamborghini Urus. In the Urus Performante (price starts at 24.49 million baht), the maximum output from the 4.0-litre V8 being has been raised to 666hp with up to 850Nm of torque.

Meanwhile, the vehicle weight has been reduced by 47kgs, giving it the best-in-class weight-to-power ratio of 3.2kg/hp. Acceleration from 0-100kph takes 3.3 seconds and it can hit a top speed of 306kph.

Apart from improved aerodynamics, the suspension has also gone through changes -- the chassis is 20mm lower while the track is 16mm broader. Alongside the standard drive modes, there's also a new Rally selection, for even more fun on a dirt track, with amplified oversteer with anti-roll and damping systems optimised for steel springs on rough and more extreme surfaces. 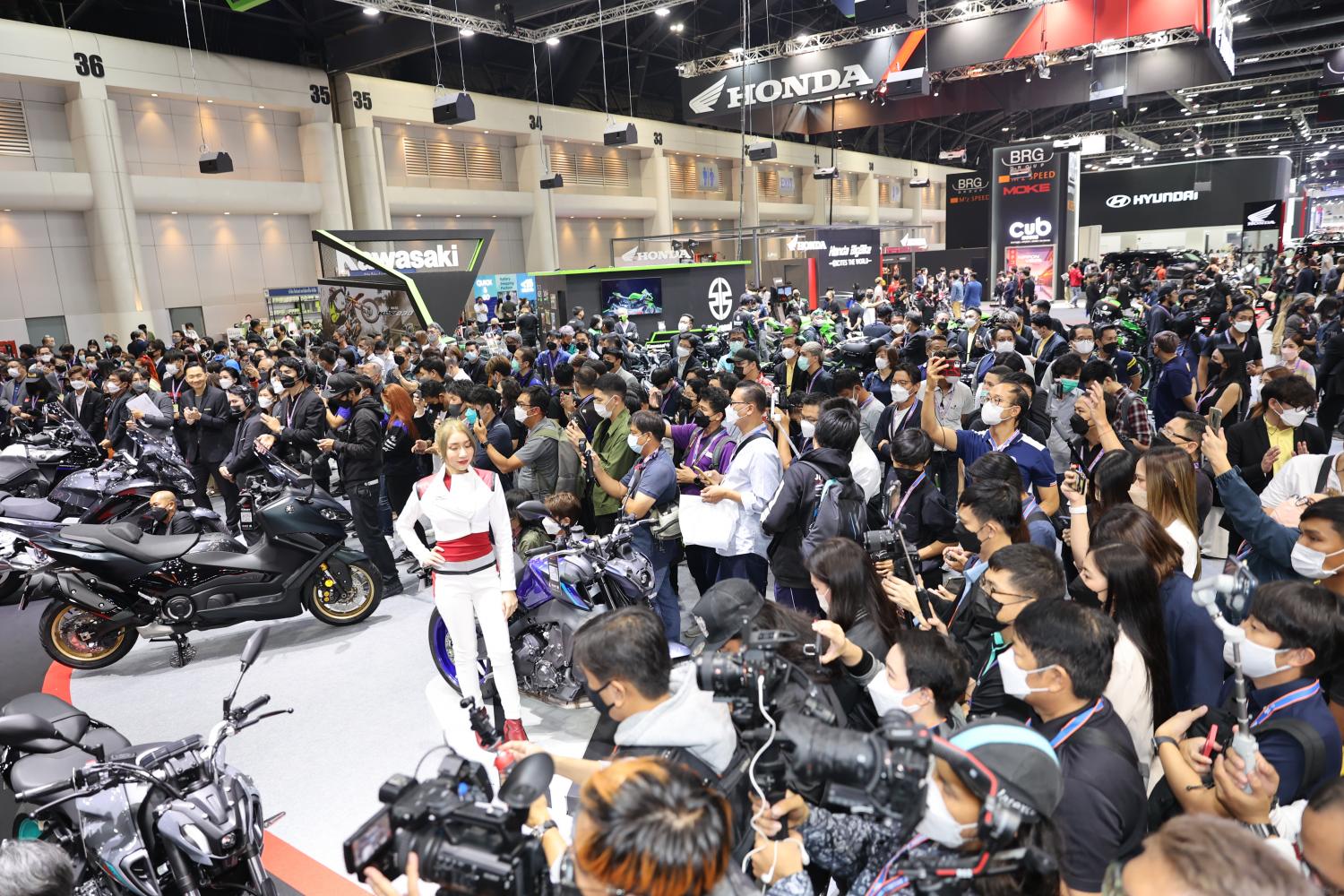  The Ertiga Hybrid comes with a mild-hybrid (MHEV) powerplant featuring an integrated starter motor and a lithium-ion battery that offers improved fuel economy as well as lower emissions. The 1.5-litre MHEV engine is capable of producing 105hp and 138Nm, and does not require extra maintenance while the battery comes with a five-year warranty.