Mercedes-Benz has recently completed its new W206 C-Class line-up in Thailand with the introduction of the plug-in hybrid C 350 e.

While the first C-Class model to be launched in Thailand was the C 220 d which made its debut at the Bangkok Motor Show in March last year, the C 350 e was added in October. According to Mercedes-Benz (Thailand), basic regular petrol models (such as the C 180) will not be offered for the Thai market.

Being a plug-in hybrid also means that the C 350 e is capable of being driven in electric mode -- Mercedes claims it runs on electric power for up to 100km (compared to just 35km in the BMW 330e).

That's due to the fourth-generation lithium-ion battery with a capacity of 25.4kWh. Featuring 96 pouch cells and its own internal cooling circuit, the new battery can be fully charged in two hours via 11kW AC and 30 minutes via 55kW DC. 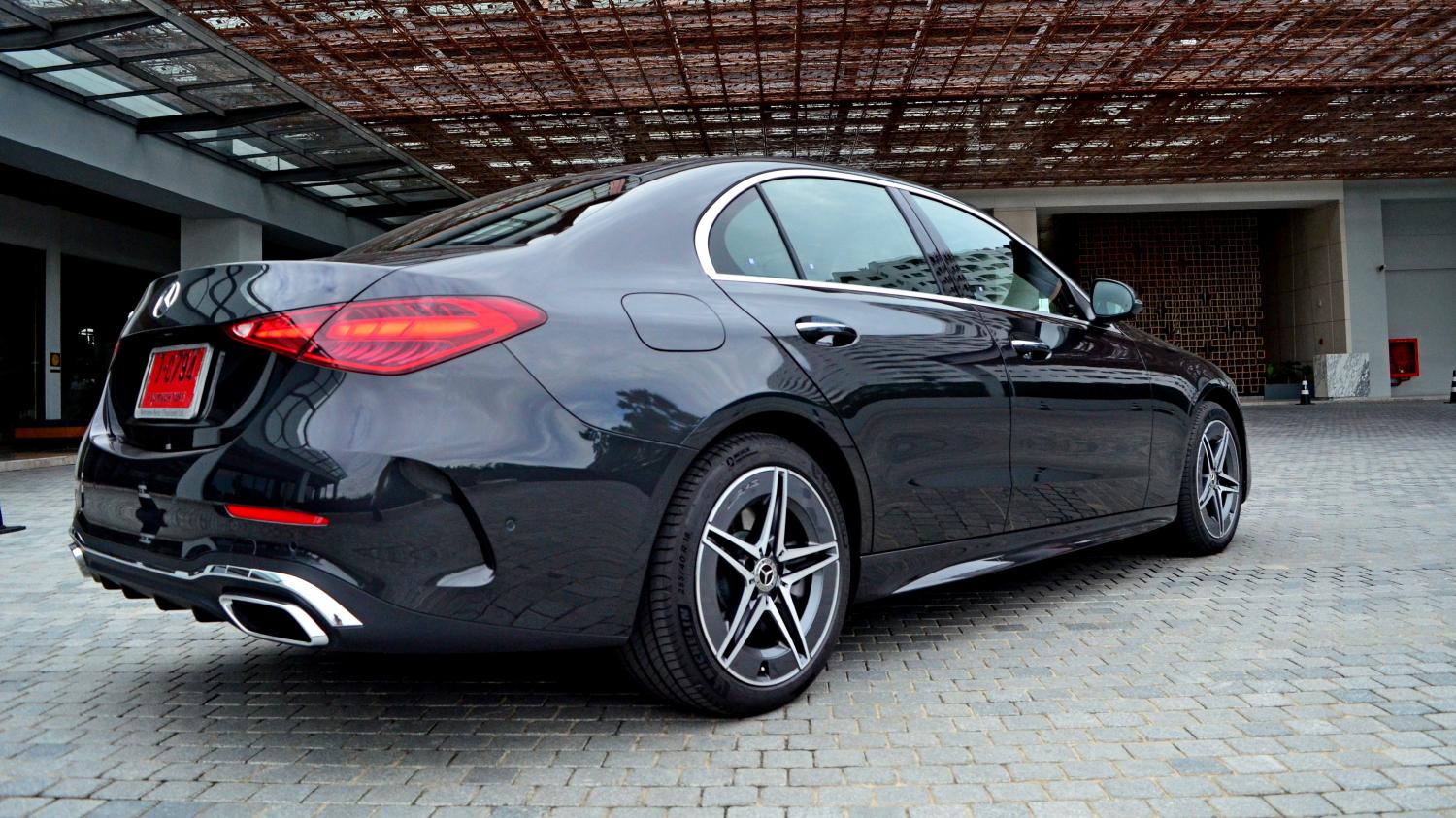 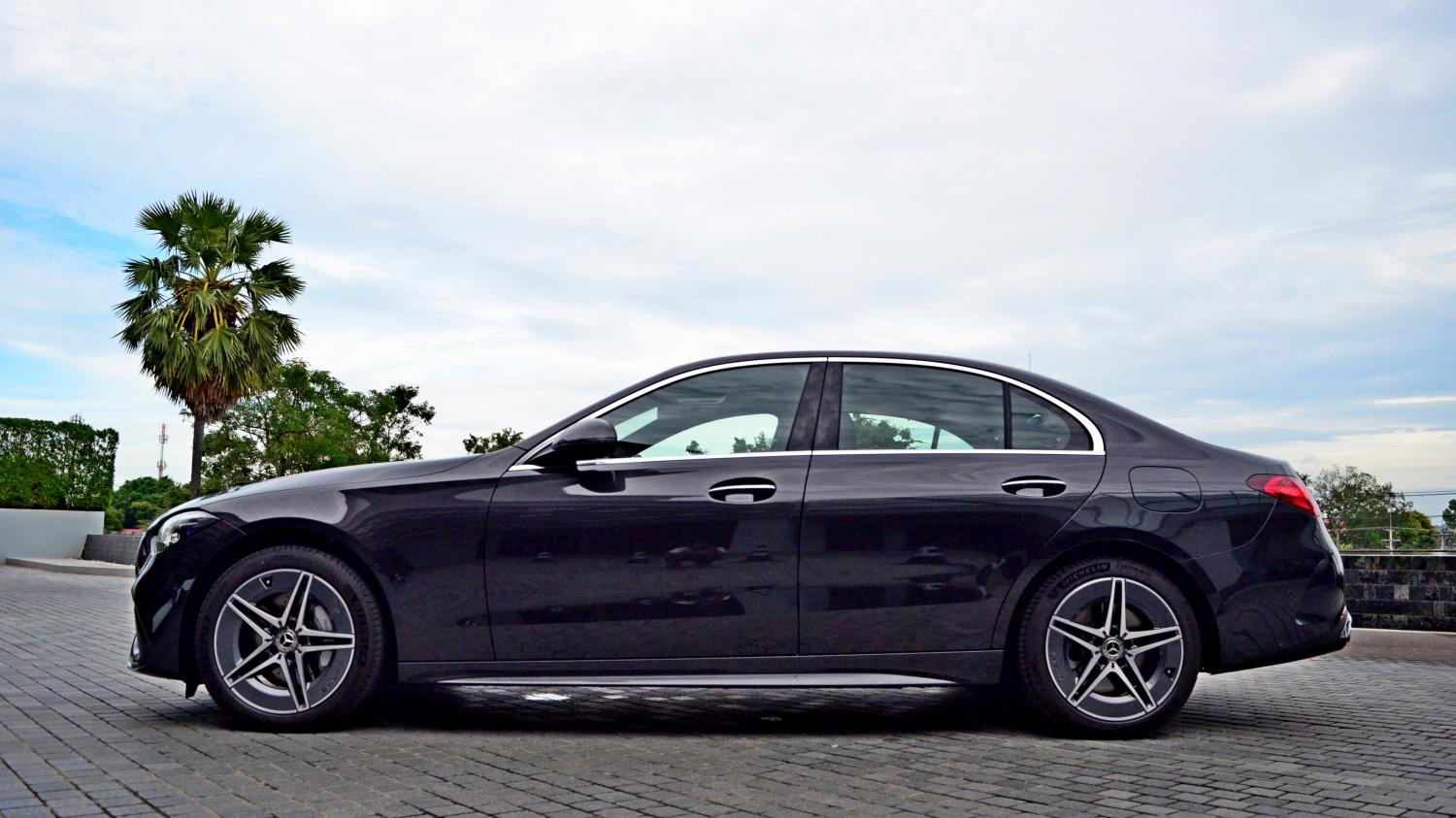 The W206 features the "Sensual Purity" design concept that reflects modern luxury in a minimalist way. While the first C-Class was the replacement for the 190 E "Baby Benz" in the 90s, it has matured and now takes on "Baby S-Class" status.

The front end of the C 350 e is highlighted by the new radiator grille featuring a large central star and lots of small stars, a power dome engine compartment lid and Digital Light headlamps. According to Mercedes-Benz, each headlamp is refracted and directed by means of 1.3 million micro-mirrors, and the resolution is more than 2.6 million pixels per vehicle.

From the side, there's a smooth, sculpted body surface treatment with minimum lines. The C 350 e comes with 18in light alloy AMG aero wheels wearing low-profile tyres (225/45 in front and 255/40 at the rear).

The rear end design appears as an adaptation of the larger S-Class, particularly the shape of the lights. The boot features kick gesture and at the bottom, there's a small air diffusor flanked by two fake exhaust tips (the real exhausts are hidden behind the bumper).

More S-Class features can be found in the cockpit, ranging from the "floating" 12.3-inch driver display to a 11.9-inch centre touchscreen offering clear images and standing out as the prominent interior feature. The driver display has three styles (discreet, sporty and classic) and three modes (navigation, assistance and service).

The S 350 e gets AMG sports steering as well as sports seats that come with large side bolsters both front and rear. Controls for the front power seats are mounted on the door panels and are of high quality, although the touch mechanism is weird to use.

There is decent space in the cabin -- Mercedes says there's more rear legroom and headroom, but the improvement isn't that spectacular. The rear seats aren't that comfortable either, being on the firm side with an upright angle.

The rear centre armrest also comes with retractable cupholders which are pretty flimsy, and there's no USB ports below the rear air vents.

The jet air vents, on the other hand, provide a luxurious feel with centre position clicks, along with 64-colour illumination that gives the interior a special atmosphere. The AMG interior also boasts a leather-covered dashboard along with the upper half of the door panels.

There are three USB-C ports along with wireless Apple CarPlay/Android Auto along with the second-gen MBUX infotainment system and Mercedes me connect for remote functions. There's also a high-end Burmester audio system to match the luxurious interior.

A fingerprint scanner is located in an ergonomic position below the central display. Mercedes-Benz says that this allows users to log into MBUX quickly, conveniently and securely.

There isn't as much luggage space in the C 350 e compared to the C 220 d due to the battery pack. As a result it has just 315 litres of storage, down considerably from the diesel's 455 litres. 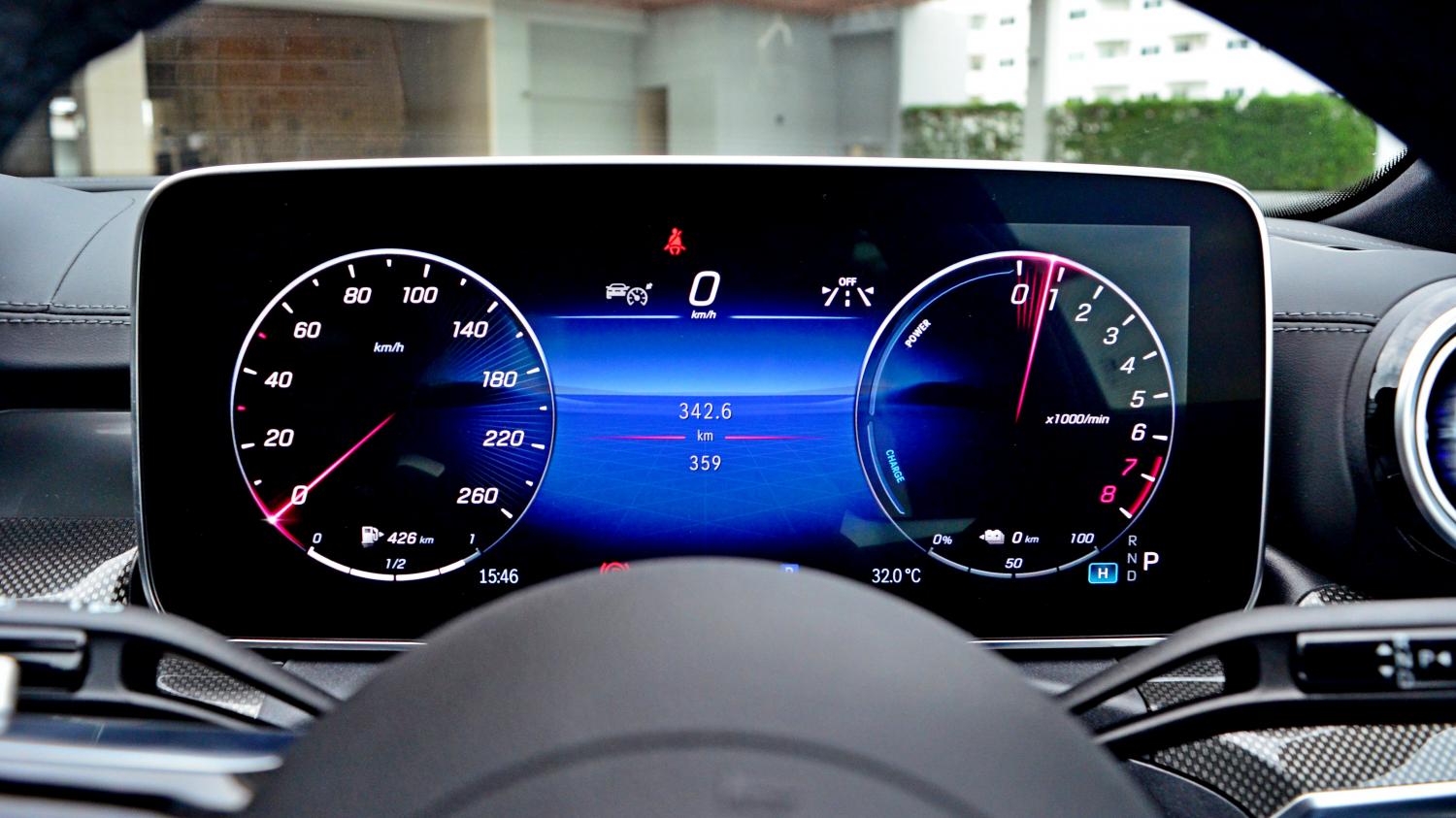 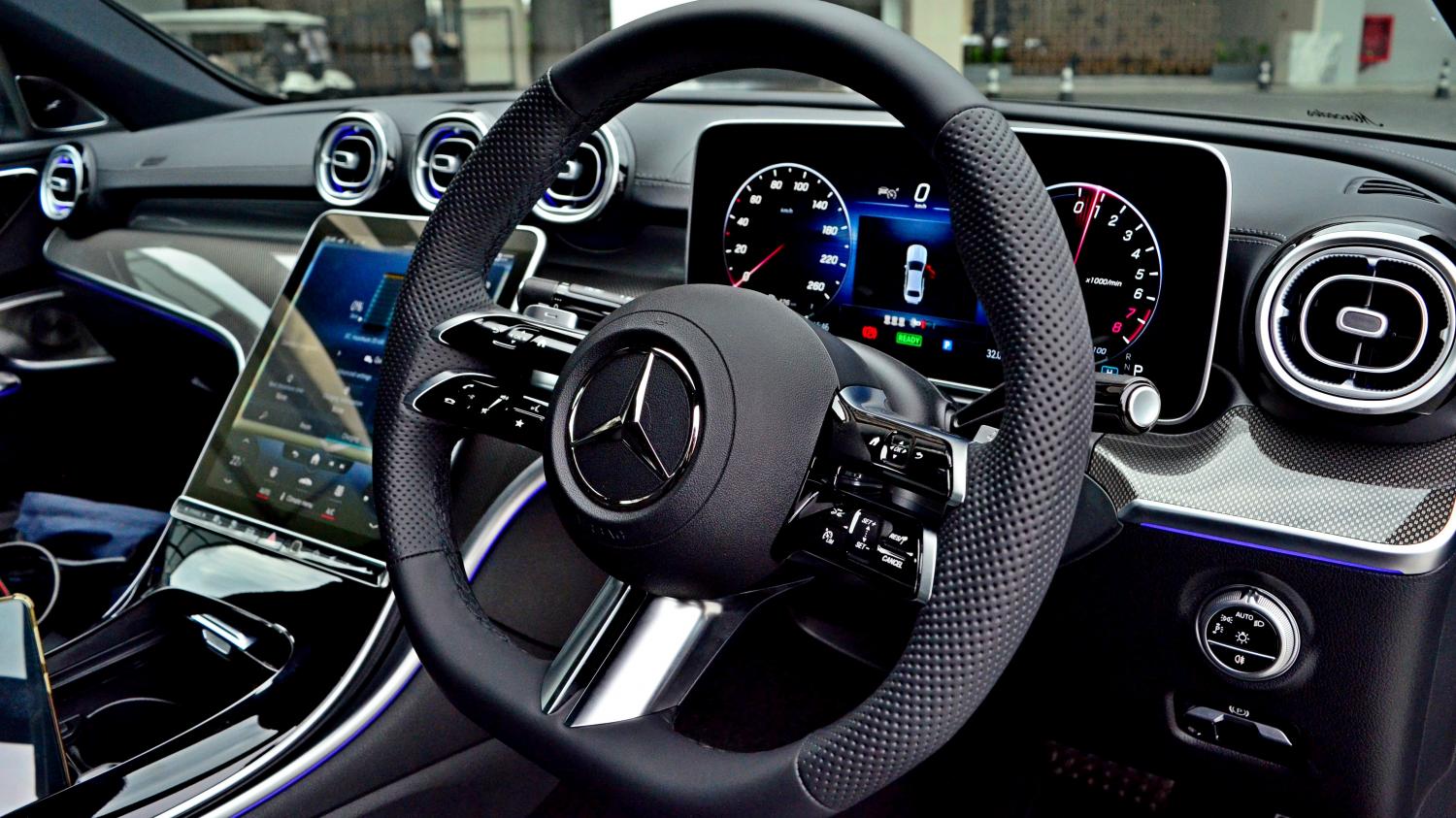 The C 350 e is powered by a 2.0-litre turbocharged petrol engine developing 204hp and 320Nm, along with an electric motor capable of churning out 129hp and 440Nm.

Mercedes-Benz says that the total output from this hybrid powertrain amounts to 313hp with maximum torque of 550Nm. Power goes through a 9-speed automatic gearbox and propels the C 350 e from rest to 100kph in 6.1sec and to a top speed of 245kph.

Thanks to the newly-developed fourth-gen 25.4kWh battery developed in-house by Mercedes-Benz, the car can be driven in pure electric mode for 100km (WLTP), which makes it super economical when driven in the city. For longer drives, the hybrid engine kicks in after the electric power is used up, giving the C 350 e the ability to continue without having to stop for a recharge.

Since most people do not drive more than 100km a day, the C 350 e can be used as an EV on a daily basis, although it is recommended that the petrol engine should be used once in a while too.

On its own, the electric motor provides decent performance and can reach speeds of up to 140kph, although this might affect how far it can travel before the battery is depleted. There's a one-pedal function with three regeneration levels controlled by rocker switches behind the steering wheel.

During the test drive, I started off in electric mode and kept on driving until the battery was completely drained and the C 350 e lived up to expectations, covering the claimed 100km in real-world driving as well as reaching 140kph without any assistance from the internal combustion engine.

Despite its 2,050kg weight, the C 350 e doesn't feel sluggish (it picks up quickly even at high speeds), although it's hard to hide all that weight while cornering. The front four-link and rear multi-link suspension offers a high level of comfort, featuring air level control on the rear axle that irons out vibrations nicely. However, rear-wheel steering is not offered in the Thai-spec version. 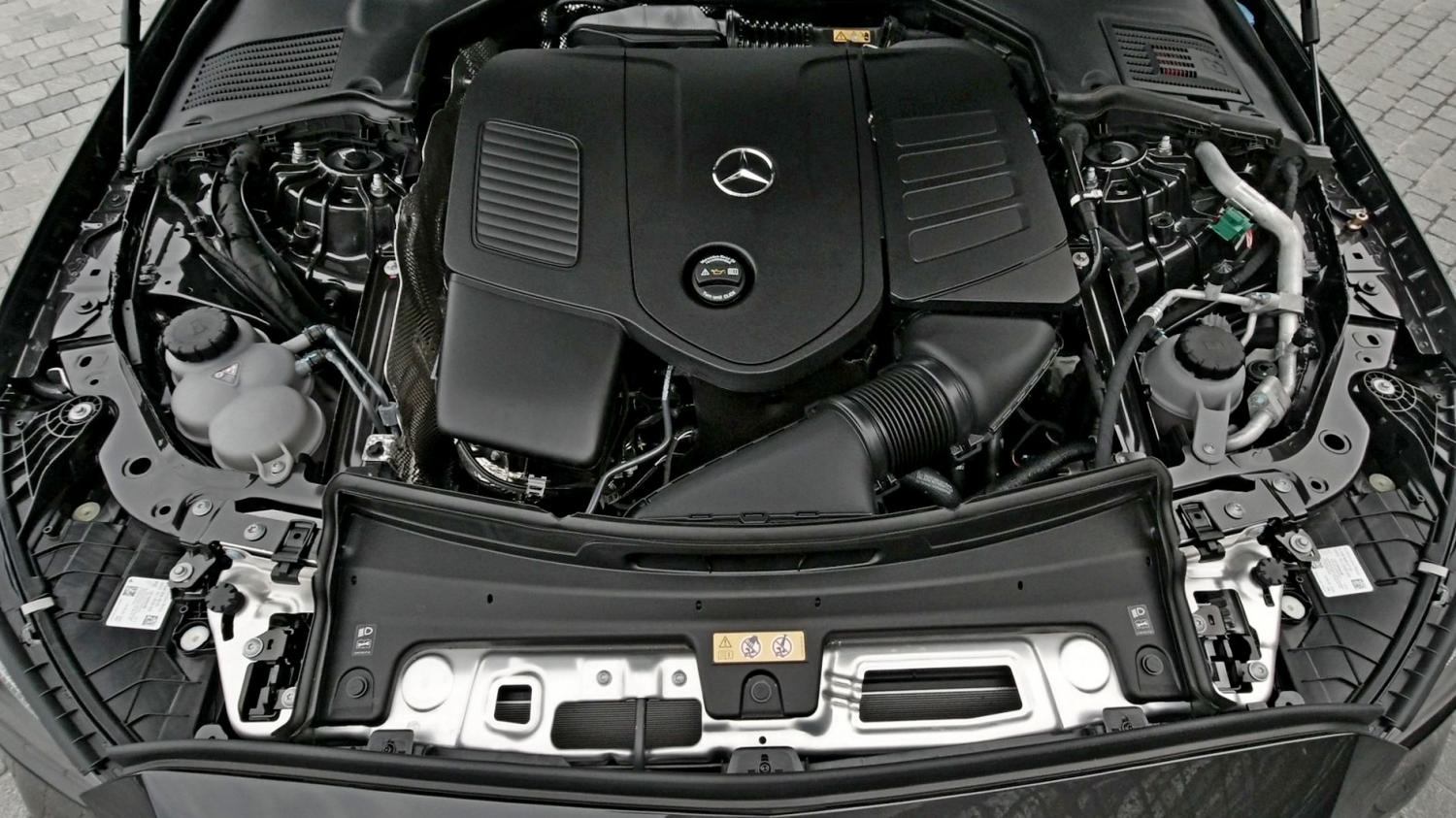 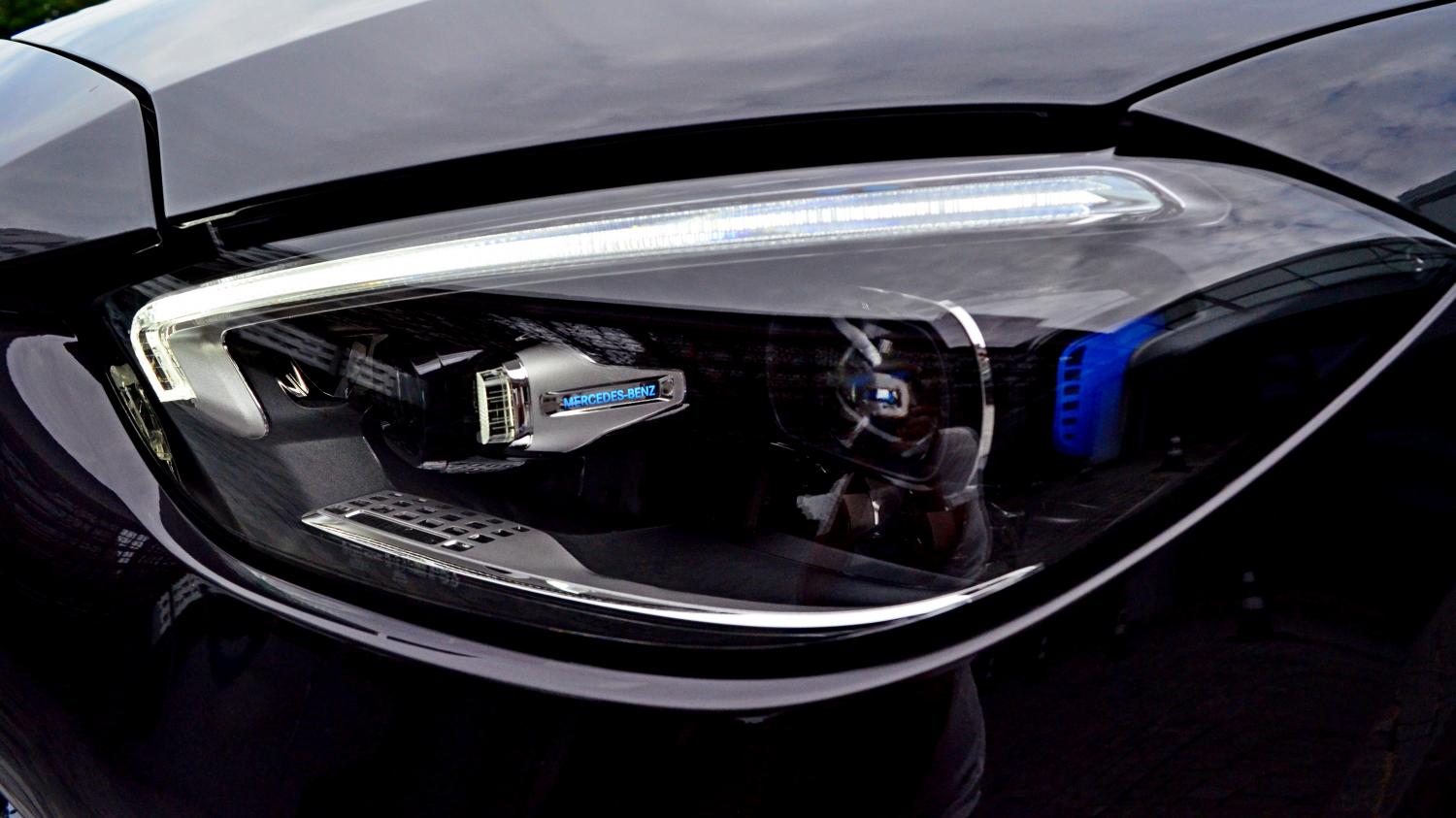 The only setback in the Mercedes-Benz C 350 e is the pricing that's way above the diesel, but it does offer buyers the best of both worlds. 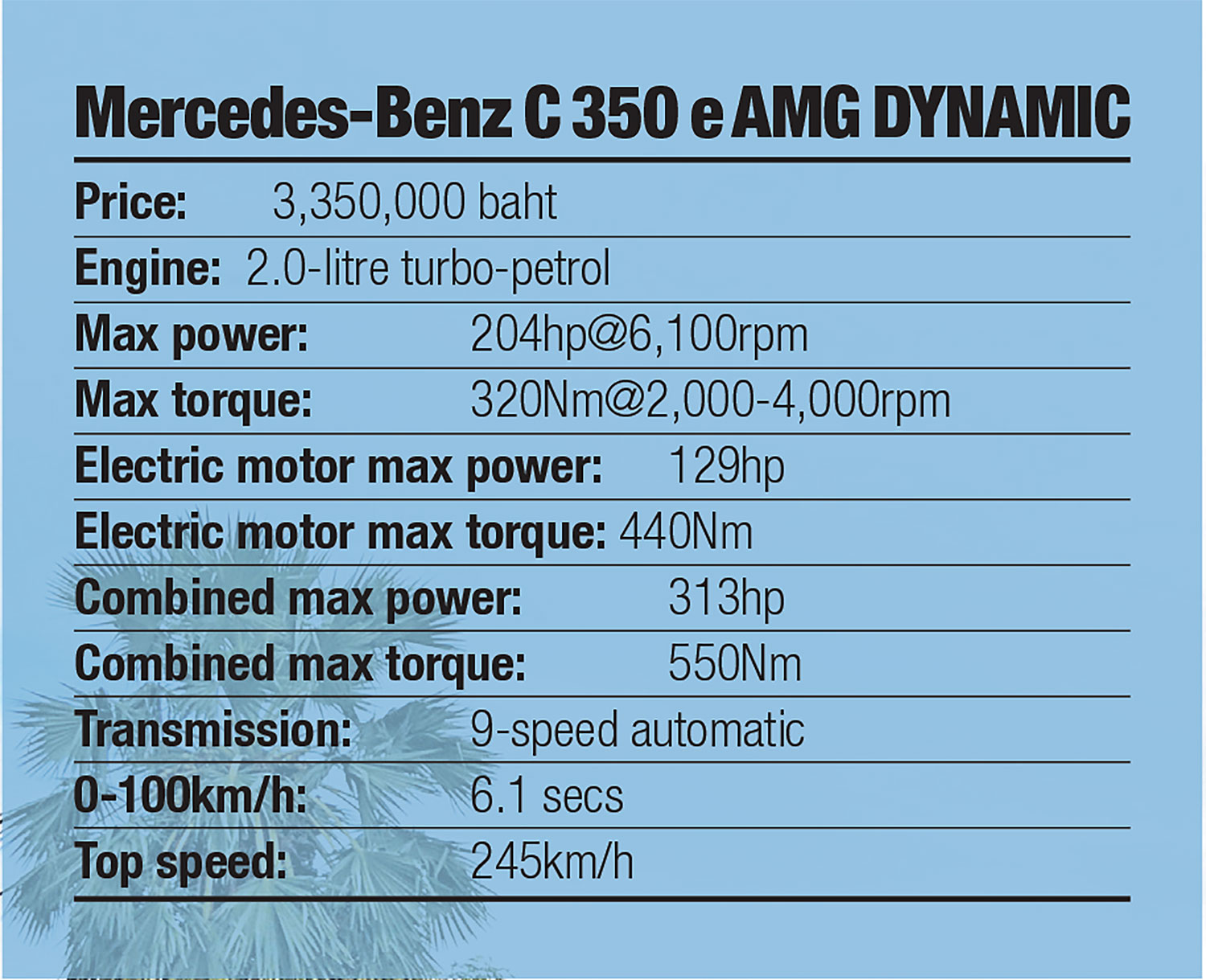 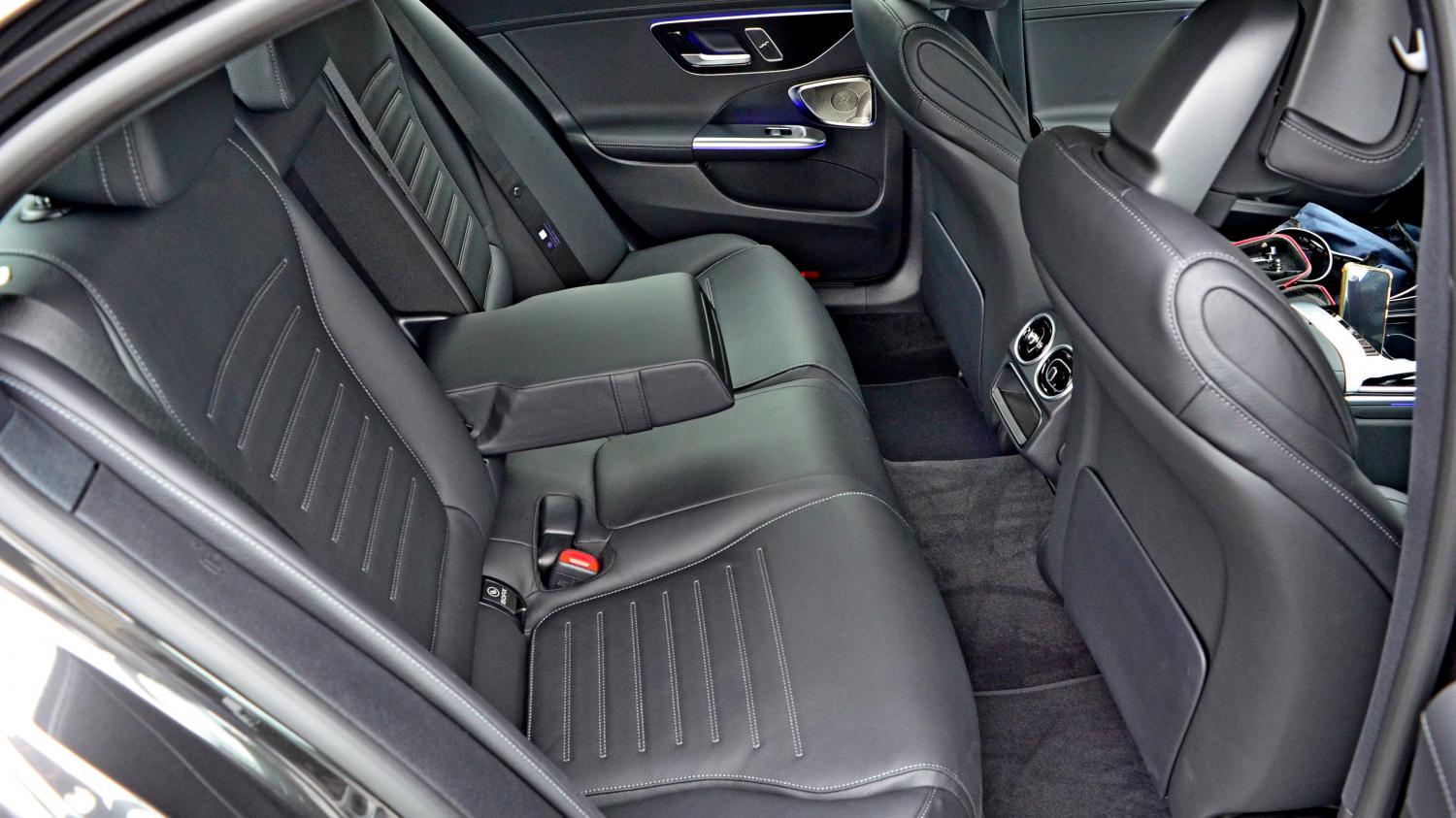 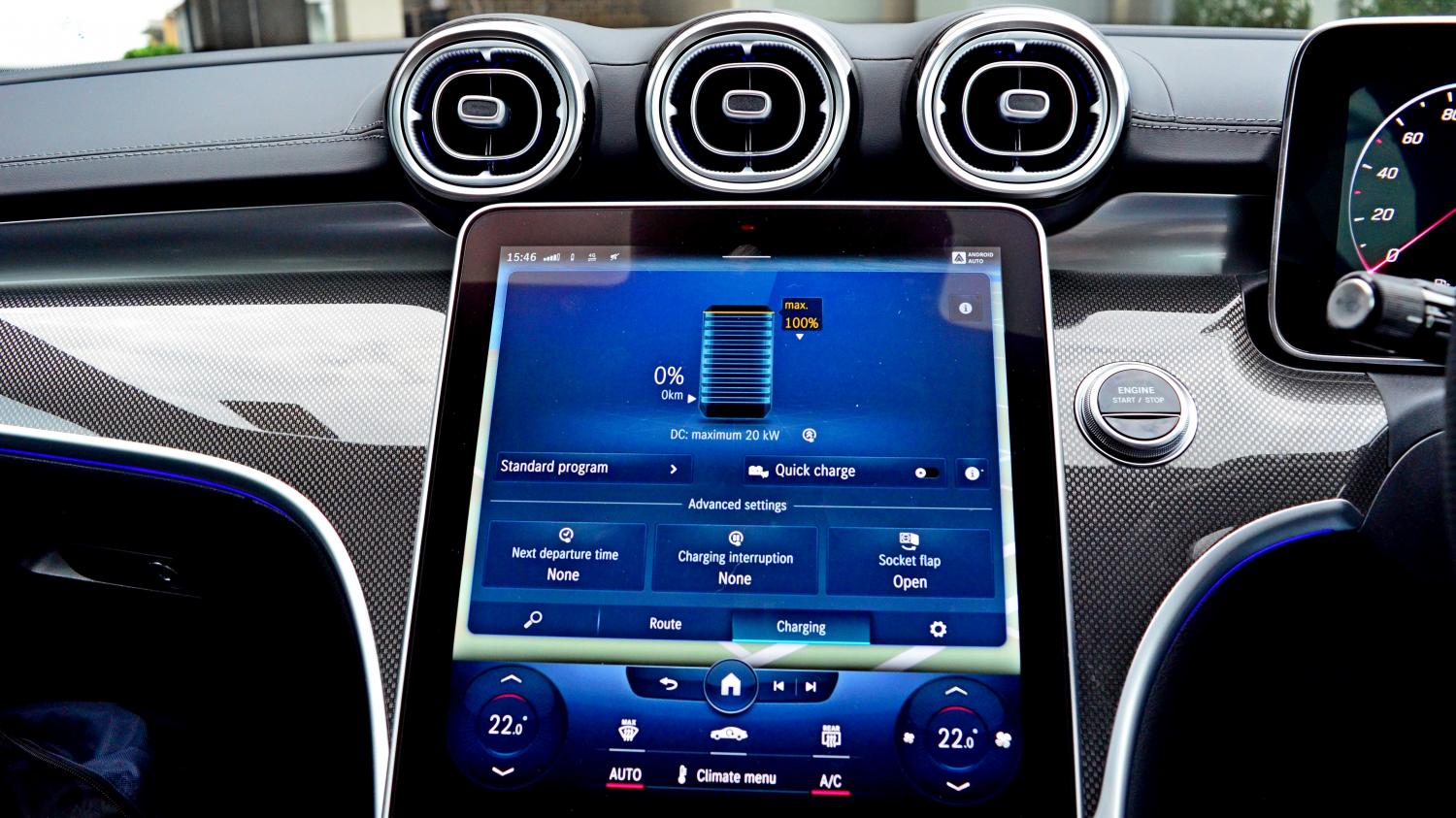 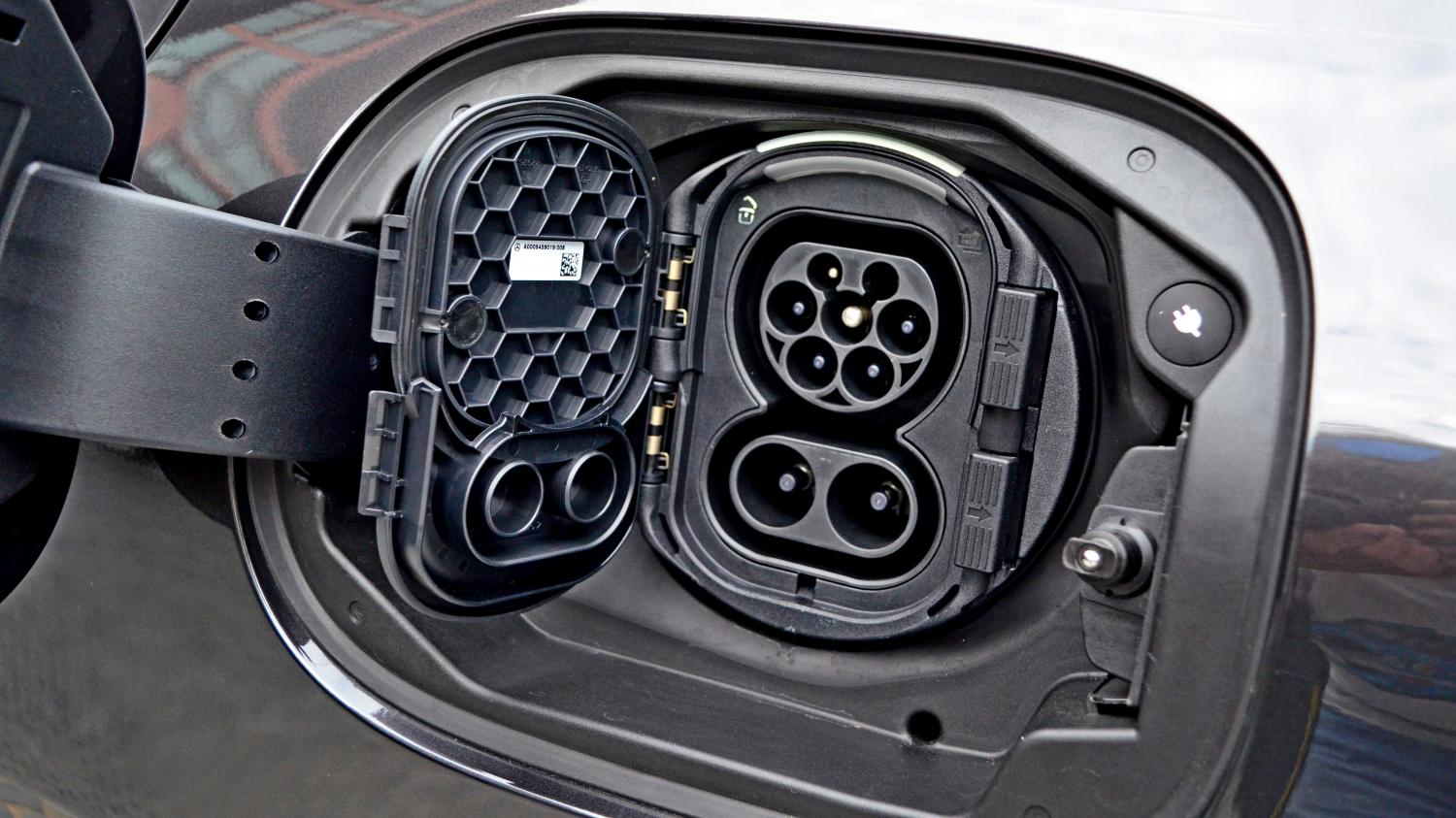