Agri-industrial giant Charoen Pokphand (CP) Group is setting its sights on innovations, biotechnology, robotics, the service industry and high-speed rail development as it seeks to diversify.

Chairman Dhanin Chearavanont said biotechnology will become a significant industry for mankind in the near future because people will live longer and need good food to support their better health.

The government is going in the right direction by including biotechnology in the 10 target industries to promote in clusters, he said. 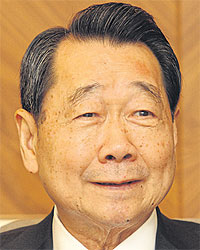 The cabinet endorsed a plan in November to attract investment in the clusters after a Finance Ministry study found private investment had receded for a decade.

In the same month, the cabinet approved in principle a ministry proposal to set up a 10-billion-baht fund to support investment in the clusters.

Investors are entitled to full corporate income tax exemption for eight years followed by a 50% reduction for five years, with tariff waivers for imported machinery.

"Thailand needs to shift to high technology in order to upgrade income and stimulate exports," Mr Dhanin said. "Thailand is no longer in a position to produce labour-intensive products."

He said biotechnology would be used to develop and increase productivity of vegetables, fruits, chicken, pigs, fish and shrimp as well as health food that can help people to have longer lives.

"CP Group has over three or four years formed alliances with partners and educational institutes to conduct research and development (R&D) in order to move into biotechnology," Mr Dhanin said.

"Under the DNA mapping, we can check diseases and cure them. This will help pigs to have better health, which will increase productivity eventually," he said.

Mr Dhanin would not disclose details of the group's annual spending on R&D but said it accounted for 5-6% of annual revenue.

CP Group is also keen to invest in robotics to be used in the livestock industry.

"The group uses about 700 robots in raising chickens in Saraburi," Mr Dhanin said.

The group is also committed to investing more in education to support its workforce, mainly through the group's Panyapiwat Institute of Management.

Masahiro Okafuji, Itochu's president and chief executive, told Mr Somkid in Japan this week that the company would join bidding for the project.

Itochu is Japan's second-largest trading company after Mitsubishi with transactions of 4.89 trillion baht and net income of 104 billion baht in 2014.