Thai hospitality group seeks the right combination of properties and services to appeal to growing millions of Chinese domestic travellers.

Banking on the substantial growth of tourism in China, Bangkok-based Dusit International has laid out a major expansion plan for the mainland with a target to have 50 hotels operating or in the pipeline within three to five years.

Dusit, one of the region's leading hospitality chains, currently has four hotels operating in China with another 20 sites in the pipeline, according to chief operating officer Lim Boon Kwee.

Overall, Dusit aims to have at least 45 hotels operating in the next three to five years, on top of its 29 operating hotels in Asia, the Middle East, Africa and the United States. Dusit International comprises four hotel brands including Dusit Thani, dusitD2, Dusit Princess and Dusit Devarana, and its own signature Devarana Spa.

Chinese visitors to Thailand last year surpassed the Japanese as the top foreign customers of Dusit which operates 12 hotels in its home market. Of the 125 million Chinese who travelled abroad last year, 6 million came to Thailand, said Mr Lim, citing figures from the Tourism Authority of Thailand (TAT).

"The Chinese travel all around the world to learn about different cultures and different food. They love Thai hospitality and Thai food," said Mr Lim, who was president of Dusit Hotel Management Company Ltd, a joint venture based in Shanghai, until Feb 1.

At the same time, domestic tourism is very strong in China, he said, adding that about 90% of the guests in Dusit hotels in China were local customers. Dusit entered the Chinese market in 2013 and now operates three hotels in Changzhou, including Dusit Devarana Hot Springs & Spa, and another in Jiangsu on the eastern coast.

"We have to enhance our brand in China and find the unique selling points to make our brand known by the Chinese," said Mr Lim, pointing out that despite a slowdown, China is still one of the fastest-growing economies in the world with "impressive" expansion of around 6.8% per year.

Currently in the pipeline for China are 11 hotels under the Dusit Thani brand, two Dusit Devarana and three dusitD2 properties, and one Dusit Princess hotels. 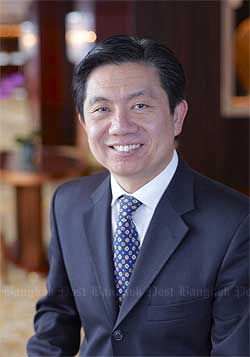 "My projection is that in the next three to five years, Dusit will have 50 hotels in the pipeline for China," he said.

Mr Lim made the prediction on the sidelines of a contract signing ceremony with China's Zheng Heng Group for the Dusit Thani Resort in Fuzhou, Fujian province, as the first internationally branded hot springs and wellness resort in the area.

The project is located Lianjiang County, a well-known hot spring destination in the northern part of Fuzhou. With 2,200 years of history and abundant historic sites, Fuzhou is the capital of Fujian and one of southeastern China's main transport hubs.

Scheduled to open in the second quarter of 2019, the Dusit Thani Hot Springs and Wellness Resort Fuzhou will feature 250 guest rooms and villas and hot spring pools. The resort is located 50 minutes from Fuzhou Changle International Airport.

Xu Chang Lu, chairman of Zheng Heng Group, said the agreement with Dusit marked the first time the Chinese real estate developer had joined with a foreign partner to open a hotel in China. Earlier, the company was in talks with a potential partner from the UK but it finally decided to choose Dusit for its project.

"The property will focus on wellnesss and spa treatment which Thailand is good at. Consequently, Dusit is the better fit as it has been in this business for 65 years," said Mr Xu, who accompanied 12 media representatives from China to Bangkok for the contract signing.

"We are delighted to bring a hotel brand known for representing Thai grandeur and renowned hospitality to Fuzhou," he continued. "We anticipate our hotel will be recognised as an excellent choice for both local and international travellers coming to this historic city."

Mr Lim said that despite challenges faced by the global economy, Dusit remained on target in terms of business expansion through new contracts, as well as guest arrivals at its hotels. The group aims to sign contracts for 20 projects a year and in 2015 it surpassed that figure.

According to filings with the Stock Exchange of Thailand, the listed parent Dusit Thani Plc said the group's hotel revenue increased 4.6% over 2014 to 5.37 billion baht last year, thanks to higher occupancy at the flagship Dusit Thani Bangkok and completed renovations at the Dusit Thani Manila. The Thai tourism industry bounced back from the political turmoil of the year before, driven mainly by strong demand from Asian tourists, especially Chinese.

However, tourist numbers from Europe and Russia declined, with the latter experiencing serious economic trouble and a weak rouble that kept travellers at home. This shift in tourist profiles has resulted in downward pressure on average room rates and revenues as Asian tourists generally have a shorter length of stay and lower spending, said the statement.

The group's other business are hotel management of both Thai and overseas properties, and education, through the Dusit Thani College and a Bangkok culinary school joint venture with Le Cordon Bleu of France.

Mr Lim, who joined Dusit International in 2013 and took up his latest position in February this year, currently oversees operations of Dusit's global portfolio of hotels and resorts across four continents and the expansion of the Thai hospitality group's global footprint.

One of six foreign men accused of the extortion of 1.8 million baht in cryptocurrency from a Russian realtor couple on Koh Samui has been arrested in Chon Buri province and returned to the island.