As smartphone-wielding commuters pile into app-enabled taxis, conventional operators and governments struggle to adjust to the new reality.

From Paris to Jakarta, ride-hailing apps have caused a stink among local taxi drivers. Outraged that they are muscling in on their market, local cabbies around the world have staged mass protests, burned tyres and publicly attacked company drivers.

In Asia's emerging markets, where the middle class is blossoming and smartphone penetration rising, a wealth of opportunity is presenting itself, but so is the hostility.

Uber, active in 72 counties, Grab, Didi Kuaidi, Ola, Go-Jek and Blue Bird are some of the big companies operating in the region catering to commuters who want cheaper fares and a smoother ride, and rivalling local taxi services.

The World Bank, recognising a need to stem Southeast Asia's abominable traffic jams, has entered the fray also with its recently launched Open Traffic service in partnership with Grab. The service allows government agencies to monitor stored traffic statistics gathered from GPS data collected from the smartphones of taxi drivers.

Companies have been aggressively expanding in Southeast Asia as smartphone sales grow briskly and traffic worsens.

The consumer research company GfK says the smartphone sales trend will likely continue for the next two to three years, with competitive pricing making phones even more affordable.

Smartphones will be "within reach of an increasing number of consumers who will be able to own and connect with a personal device for the first time", said Stanley Kee, managing director for Southeast Asia at GfK.

Recognising the limitations in Asia's emerging economies has prompted e-taxi companies to tailor their services to fit the culture. Low credit card penetration rates mean that almost all companies accept cash payments along with cards.

Similarly, car ownership compared with the rest of the developed world is low, which means for taxi services "the runway for growth is immense", said Cheryl Goh, vice-president of marketing at Grab, in an interview with Asia Focus.

"In the Greater Jakarta area alone, where the population is twice that of Beijing or Shanghai, the market is still in its infancy. And there are 10 other megacities outside of Jakarta which we haven't entered yet," she said.

For many foreigners and expats the services offer relief to the daily annoyance and anxiety of getting a local taxi.

In Thailand, where rogue drivers frequently avoid turning on the meter to gouge customers at tourist spots, or flatly refuse to drive to areas that may inconvenience them; or in places such as China and Vietnam where drivers often renege on agreed prices, using a formalised, accountable service cuts out the headache.

The biggest players battling against each in the region are San Francisco-based Uber and Grab, which initially launched in Malaysia as MyTeksi in 2011.

Uber, which entered Singapore in 2013 as its entry point into Asia and the most controversial of the apps, has expanded into most Asian countries. The company has a private valuation of US$62.5 billion, the tech industry's biggest, and announced earlier this month that it had raised $3.5 billion in additional investment from Saudi Arabia's sovereign wealth fund. But the company is facing stiff competition in Asia.

Earlier this year, the US ride app Lyft, China's Didi Kuaidi, Ola in India and Grab partnered to fend off Uber by allowing customers of each company to use their local apps to order transport when they travel to other markets in the network.

Major rival Grab is in 30 cities in six countries, has over 15 million downloads and a fleet of about 300,000 drivers. One in nine smartphone users in the region are on Grab, according to the company.

Ms Goh said that safety was one of the app's biggest selling points, resonating mostly with women users. Eight in 10 women in developing Southeast Asian countries now find taking a taxi safer with Grab, she said.

"Friends tell me stories of being able to put their children or grandparents in rides without worry for their safety," said Ms Goh. 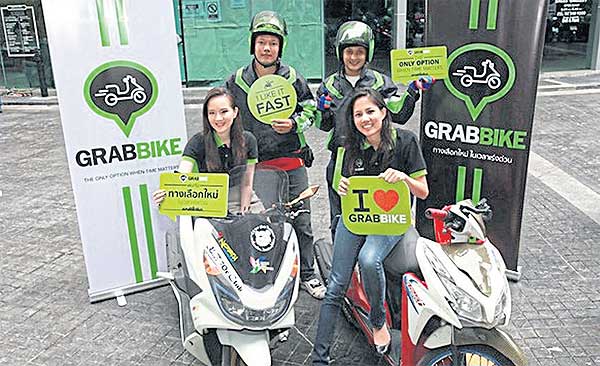 GrabBike had high hopes for Thailand before the military government shut it down in order to protect the entrenched motorcycle taxi business. Days later the government introduced its own motorcycle app.

Alongside car taxis is a growing demand in Asia for hailing motorcycle rides as an alternative to the local equivalent, a service that is driving companies' regional expansion.

Since launching in 2011, Go-Jek, a motorcycle taxi and delivery service, has some 200,000 freelance drivers together with hundreds of other service providers.

But being innovative is not without its obstacles.

While some companies offer insurance and helmets for their moto taxi passengers, and ensure drivers go through rigorous training, some governments have yet to be convinced of the apps' legitimacy.

In Thailand, after pleading with authorities for their services to be made legal, Uber and Grab were dealt a blow when their moto services were suspended last month.

The Land Transport Department insists UberMoto and GrabBike are illegal and were required to stop their operations or face legal action.

The department said their operations were also unfair to the roughly 100,000 motorcycle taxi drivers who are operating legally and threatening their jobs. The firms also failed to pay taxes, it said.

Ms Goh said: "Taking a step back, it's important to understand that in many parts of the world, there aren't regulations for e-hailing services because it's still a new industry. We are working hard with governments to help them think about how these regulations should come into effect when they do."

The challenges in Thailand are much the same as in countries such as Indonesia or Vietnam, where catering to the local language, local payment preferences and local culture is crucial to the success of any business.

An Uber car driver in Bangkok who wished not to be named says the company's motorbike taxi services were scrapped due to the company's unwillingness to comply with the racket that exists between local authorities and motorcycle taxi drivers, in which drivers pay police for permission to operate in a certain area.

"Uber doesn't want to pay -- not pay anything."

"It's like a mafia," he said of the pact between police and drivers.

Similarly, in Indonesia the transport ministry considers Uber, Grab and Go-Jek illegal because they lack the operating permits required.

"The issue is not about online or offline business, but the legality of the business," the acting director-general of land transport, Sugiharjo (who uses only one name), said at a news conference.

Rapid growth among firms is also leading to a new trend of consolidation and innovation. China's Didi Kuaidi was a merger between Didi Dache and Kuaidi Dache. "Dache" is Mandarin for taxi. The Indian app Ola -- formerly known as Olacabs -- acquired TaxiForSure for $200 million in March.

Blue Bird, Indonesia's largest taxi and transport company, has teamed up with Go-Jek, to "cover aspects of technology, payments, and promotions", the company said.

And of course there is the pact between Grab, Lyft, Ola and Didi Kuaidi.

"There is definitely more consolidation coming. Taxi apps are growing at an exponential rate, so it's smart to take out candidates before they can steal market share," Bradley Gastwirth, CEO at the US advisory firm ABR Investment Strategy, told CNBC.

With government regulations and laws still evolving and leading to uncertainty, companies have been wise to diversify their services.

Go-Jek is leading the way with the largest array of home delivery services, allowing users to order anything from a massage to food to cleaning services. In May, Grab launched GrabFood in Jakarta, a food delivery service to rival Go-Jek's Go-Food. The company also launched GrabHitch, a car-pool service.

Though e-taxi services in Asia still need to be smoothed out -- waiting times can be unpredictable, GPS inaccurate, and drivers often lack basic street knowledge -- they are on the right track to providing responsible, personal services.

As long as local governments don't kill them off, the services are expected to prompt local taxi drivers to up their game rather than putting them out of business, so that one day arguing with a driver over turning on the meter becomes a thing of the past.