Thai VietJet Air set to take off after extended delay

A VietJet Airbus 321 takes off. TVJA is set to assume scheduled flights that VietJet Air now services between Thailand and Vietnam.

A formal announcement for the launch of Thai VietJet Air (TVJA) is set to be made within the next two months, with scheduled flights to start soon thereafter, making TVJA the fifth major Thai-registered budget airline.

Nguyen Thi Thuy Binh, vice-president of VietJet Aviation Joint Stock Company, confirmed that TVJA was well-primed to begin operations and was only waiting for the "right moment".

In an interview with the Bangkok Post in the Thai capital, she acknowledged that TVJA's launch of regular flights has been a long time coming, with the protracted three-year holding pattern allowing the airline to get it right.

"Three years of preparations have been quite good, allowing us to ensure that all of the crucial factors, including the airline's operating licence, safety protocols and issues related to operational readiness are set for a smooth kickoff," she said.

Ms Binh insisted that TVJA's previous ownership change was not an issue. Somphong Sooksanguan, the original Thai partner and founder of Thailand's Kan Air commuter airline, sold his entire 51% holding in TVJA to other unnamed Thai interest groups a year ago.

But Ms Binh maintained that TVJA has complied with the regulations required by the Thai civil aviation authorities that restrict foreign ownership in Thai-registered airlines to 49%.

She further did not consider the UN International Civil Aviation Organization's flagging of Thailand's aviation sector for having "significant safety concerns" as being an impediment to TVJA's launch. 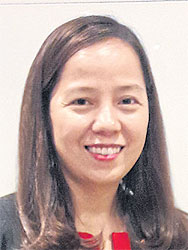 Having operated chartered flights between Thailand and Vietnam for tour operators over the past year with two Airbus A320 family jets, TVJA will start scheduled flights by initially assuming the two routes currently served by parent VietJet Air.

The flights will be from Bangkok's Suvarnabhumi Airport to Hanoi and Ho Chi Minh City, with frequencies of 1-2 flights per day and 3-4 flights per day, respectively.

In association with VietJet Air, TVJA intends to expand its network with the inauguration of regular services from Bangkok to Danang, Dalat and Haiphong later this year.

According to Ms Binh, the Bangkok-Danang service will initially start with four flights a week before ramping up to daily service. The frequencies for the Bangkok-Dalat and Bangkok-Haiphong routes are also expected to kick off with 4 flights per week each.

She did not touch on TVJA's plans for commencing scheduled Thai domestic flights, though senior VietJet Air executives have previously stated their intention of operating flights to Phuket, Chiang Mai and Udon Thani.

VietJet Air will shortly hold talks with the tourism boards in Thailand and Vietnam and players in the industry to help raise bilateral tourism traffic with the airline's support.

Incentive schemes could be launched over the next two months to help increase the numbers of tourists between Thailand and Vietnam by at least 10% over the next year, she said.