Investors urged not to panic over EU vote

Britain's upcoming referendum on membership of the European Union is influencing market sentiment around the world, resulting in asset prices fluctuating across the board, says a gold trade group.

The Gold Traders Association says a "Brexit" vote on Thursday would cause fluctuations but the gold price would not exceed US$1,350 an ounce as supply keeps increasing.

"About 40% of gold mines produce gold at a cost as high as $1,200 an ounce, so they could not keep producing just to see themselves lose more money when the price went below cost last year," Mr Jitti said. "Now the situation has reverted and prices are viable to resume mining."

He said 60% of mines operated at a cost of about $1,100 an ounce and had been able to continue operations. 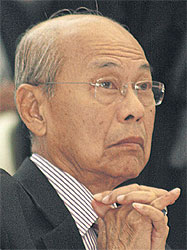 "Even if Britain decides to leave the EU, which would definitely boost gold prices, I don't think prices would go through the ceiling of $1,350 because rising supply will cool down demand from those investors who shift to save havens," said Mr Jitti.

He said poor purchasing power caused by the sluggish global economy will also help keep gold's price below that ceiling.

Mr Jitti said the prospect of the US Federal Reserve raising its interest rate would also affect gold prices.

"The next decision is set to be made in September but I think the rate is less likely to rise as the global economy remain sluggish," he said.

He said the gold price had come a long way from last year to reach $1,310 an ounce.

Meanwhile, an economist has advised investors not to panic over a Brexit effect.

"Despite a short-term impact on financial volatility, there is no need to panic over a possible Brexit scenario due to Thailand's limited exposure to trade and tourist arrivals from Britain," said Amonthep Chawla, head of research at CIMB Thai Bank.

"For the real economic sector, the impact would not occur immediately if the British people vote to leave the EU as it would take up to two years for Britain to formally relinquish its EU membership.

"Risks to Thai exports and tourism would not be substantial as shipments to Britain account for less than 2% of exports and British tourists make up around 3% of global tourists [visiting Thailand]."

Britain was ranked as Thailand's 19th-largest trading partner in 2015, accounting for 1.5% of the kingdom's trade.

An indirect impact of Brexit on Thailand's economy would be the weakening of European economies, causing a slowdown in global trade and affecting trade and tourist proportions from Europe coming into Thailand, said Mr Amonthep.

"We have to monitor this indirect impact, but it should not be too extreme because, even if Brexit occurs, such impact would be on a gradual basis," he said.

"I do not think Brexit would induce a violent effect on the British labour market, cause a deterioration in Britain's status as a financial hub or incur a cut in its [sovereign] credit rating. I see Brexit as having a short-term impact on the global capital and financial markets."

Although the baht could record a short-term depreciation as there could be a global sell-off of risky assets, the Fed's interest rate normalisation and the People's Bank of China's possible monetary easing remain the crucial factors affecting the baht's value, he said.