Passengers embrace each other as they wait outside Istanbul's Ataturk airport, early on Wednesday following their evacuation. (Photo by AP)

ISTANBUL - A triple suicide bombing at Istanbul's international airport left 41 people dead, 13 of them foreign nationals, and 239 wounded, the city governor said in a statement.

The governor's office said 109 of the 239 wounded were discharged from hospital.

It said 13 of the dead were foreigners.

A Turkish official, speaking on condition of anonymity, said five of the dead were from Saudi Arabia, two were from Iraq, and one from Tunisia, Uzbekistan, China, Iran, Ukraine and Jordan.

No one has claimed Tuesday's attack yet but Turkish authorities said they suspect Islamic State (IS) jihadists.

The attackers began spraying bullets at the international terminal entrance before blowing themselves up at around 10pm on Tuesday (2am Thai time on Wednesday), Turkish authorities said.

It is the deadliest of four attacks to rock Turkey's biggest city this year, with two others blamed on the IS and another claimed by a militant Kurdish group.

Though there was no immediate claim of responsibility for Tuesday's carnage, "the evidence points to Daesh", Prime Minister Binali Yildirim told journalists at the scene, using another name for the jihadists.

As dawn broke over the destroyed terminal on Wednesday, workers began removing debris left by the blast. The airport partially reopened, but the international arrivals area remained closed and several emergency vehicles maintained a heavy security presence. An information board inside showed that about one-third of scheduled flights had been cancelled, with a host of others delayed.

Mr Yildirim said the attackers arrived at the airport in a taxi and blew themselves up after opening fire. Asked whether a fourth attacker might have escaped, he said authorities have no such assessment but are considering every possibility.

Another Turkish official said two of the attackers detonated explosives at the entrance of the international arrivals terminal after police fired at them, while the third blew himself up in the parking lot.

The official, who also spoke on condition of anonymity in line with government regulations, cited interior ministry information and said that none of the attackers managed to get past security checks at the terminal's entrance.

Turkish airports have security checks at both the entrance of terminal buildings and then later before entry to departure gates.

Security camera footage widely circulated on social media appeared to capture two of the blasts. In one clip a huge ball of flame erupts at an entrance to the terminal building, scattering terrified passengers.

Another video shows a black-clad attacker running inside the building before collapsing to the ground -- apparently felled by a police bullet -- and blowing himself up.

A photographer saw bodies covered with sheets at the terminal, which bore heavy damage from the blasts.

Bullet holes peppered the windows and shattered glass lay on the floor, while abandoned luggage was scattered everywhere.

Hundreds of police and firefighters including forensic officers were at the scene.

"Somebody came and shot at us and then my sister was running," Otfah Mohamed Abdullah said.

"I don't know which way she was running and after that I was falling down. I was on the ground till he finished... I can't find my sister."

South African Judy Favish, who spent two days in Istanbul as a layover on her way home from Dublin, had just checked in when she heard an explosion followed by gunfire and a loud bang.

She says she hid under the counter for some time.

Ms Favish says passengers were ushered to a cafeteria at the basement level where they were kept for more than an hour before being allowed outside. 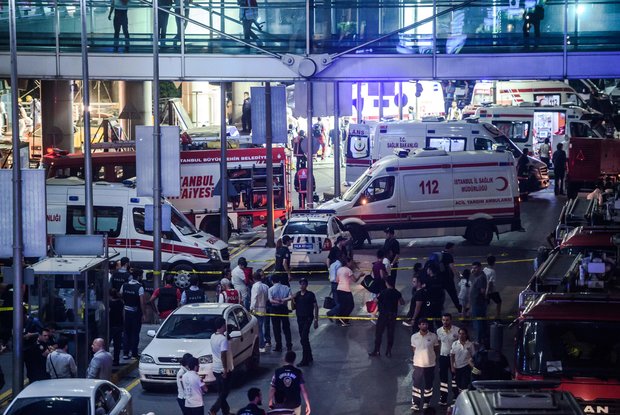 Forensic police work the explosion site at Ataturk airport on Tuesday in Istanbul. (Photo by AFP)

Two South African tourists, Paul and Susie Roos from Cape Town, were at the airport and due to fly home at the time of the explosions.

"We came up from the arrivals to the departures, up the escalator when we heard these shots going off," Paul Roos said. "There was this guy going roaming around, he was dressed in black and he had a hand gun."

There was panic at the nearest hospital in Istanbul's Bakirkoy district, which was inundated with relatives desperate for news of loved ones.

Brussels airport, itself the scene of suicide bombings just months ago, tweeted condolences, saying: "Our thoughts are with the victims of the attacks at @istanbulairport."

The US and French consulates warned people to stay away from the area.

Mr Erdogan met with his prime minister and military chief after news of the carnage broke.

"We urge the world, especially Western countries, to take a firm stand against terrorism," Mr Erdogan said in a statement.

"Despite paying a heavy price, Turkey has the power, determination and capacity to continue the fight against terrorism until the end."

Although no group has yet claimed responsibility for the attack, initial speculation centered on Turkey’s two main enemies: the IS and Kurdish militants linked to the Kurdistan Workers’ Party, or PKK, which has waged war with Turkey for more than three decades. Last year, peace talks with the PKK broke down, and the two sides have been at war since. But as hours passed after the attack, Turkish officials turned their attention toward the Islamic State.

“The terrorists arrived at the airport in a taxi,” Mr Yildirim said. “We will share more details about the attack later. There was no security lapse at the airport.”

Turkey has been rocked by a series of bombings since 2014, and the attacks have been increasing in frequency. In some cases, Kurdish militants have claimed responsibility, but in others, including ones this year in Istanbul’s old city and on its main pedestrian boulevard, Turkish officials have blamed the IS.

Security expert Abdullah Agar told CNN Turk the attack bore the hallmarks of the IS group.

"It really bears a resemblance to their methods," he said in reference to the Brussels bombings, which were claimed by the IS.

Michael Smith II, an analyst who closely tracks the IS' propaganda online, said on Tuesday that there had been a noticeable uptick in the group’s statements regarding Turkey, especially after the announcement last year that the US had gained access to the Incirlik Air Base.

“Official claims of responsibility for most attacks the Islamic State has been accused of executing in Turkey have been notable by their absence,” Smith said in an email. “However, during the past year, a significant increase in focus on the Erdogan government’s policies within Islamic State propaganda has been used to build expectations the group will expand its terrorism operations into Turkey.”

Almost immediately after the attack on Tuesday, there was speculation that it might have been a response by the IS to the recent reconciliation between Turkey and Israel, which announced a wide-ranging deal this week to restore diplomatic relations. The two countries had been estranged for six years, after an episode in 2010 in which Israeli commandos stormed a flotilla carrying humanitarian aid for the Gaza Strip in defiance of an Israeli blockade; several Turkish activists were killed.

Mustafa Akyol, a prominent Turkish columnist, wrote on Twitter on Tuesday evening: “The fact that the attack came right after the Turkish-Israeli deal might be not an accident — if ISIS is that fast in response.”

Other analysts, though, noted that terrorist attacks involving multiple suicide bombers take time to prepare and are not typically attempted on very short notice.

“Unfortunately, we see the side effects of a disastrous Syria policy that has brought terrorism into the heart of Istanbul and Ankara,” said Suat Kiniklioglu, a former lawmaker who is now chairman of the Centre for Strategic Communication, a research organization in Ankara. “This is obviously intended to create an atmosphere of chaos and hit the economy and tourism.”

When the attack happened, Asli Aydintasbas, an analyst and writer on Turkish affairs, was on a plane bound for Istanbul but was rerouted to Ankara, where the airport was filled with stranded and confused tourists, double-checking with airport workers that they had in fact landed in a different city.

“Our world is turned upside down,” said Ms Aydintasbas, who has chronicled Turkey’s descent into chaos in recent years in her columns.

Referring to Istanbul and the stature it attained in recent years as a global tourist destination, she said: “It was a happening town, cutting edge in arts and culture. It’s the kind of place that Condé Nast would write about. Now this is a Middle Eastern country where these things happen.”

Istanbul, a major tourism hub that is home to some 15 million people, has suffered a series of attacks in recent months, including a bombing in the heart of the tourist district that killed a dozen German visitors and was blamed on the IS.

Two months later, three Israelis and an Iranian were killed in a bombing on the city's main Istiklal shopping street, also blamed on the IS.

A blast on the tarmac at Istanbul's other international airport, Sabiha Gokcen, killed a cleaner in December.

Turkey has been hit by at least five attacks blamed on IS jihadists, including a blast in Ankara in October 2015 that left over 100 dead, though the group has never formally claimed responsibility for an attack in Turkey.

Ankara has meanwhile launched a sustained offensive against the outlawed rebel PKK following the collapse of a ceasefire last year.

Hundreds of members of the Turkish security forces have since been killed in PKK attacks. 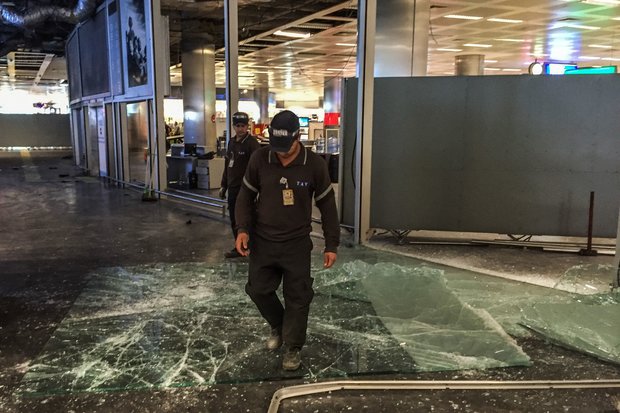