The government and the business sector have welcomed reports that the United States is to remove Thailand from its global list of worst offenders in human trafficking with the US acknowledging the government has made improvements to combat the scourge.

Deputy Prime Minister Prawit Wongsuwon on Wednesday welcomed news Thailand will be upgraded from Tier 3 to "Tier 2 Watch List" in the four-tier grading system. Tier 1 and Tier 2 are the other two tiers.

But he also stressed that even though Thailand will move to a better rank, the country will not let up in its crackdown on human trafficking. 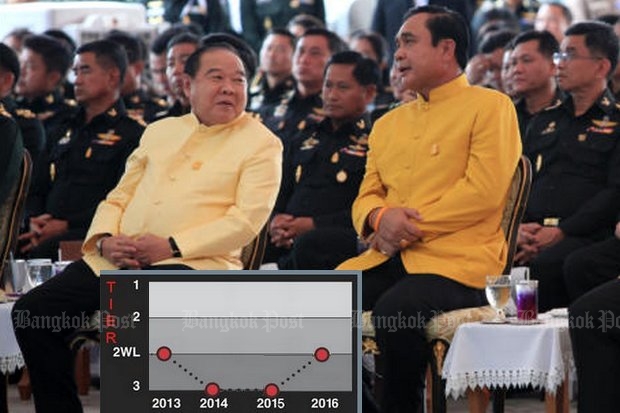 Deputy Prime Minister Prawit Wongsuwon (left) and the government of Prime Minister Prayut Chan-o-cha were pleased at the US decision to raise the country's effort at fighting human trafficking. (Main photo by Chanat Katanyu)

A Reuters report said the US has decided to remove Thailand from its list of worst human trafficking offenders (Tier 3), a move that could help smooth relations with the military-run government.

The one-tier upgrade, confirmed by a US official in Washington and a Bangkok-based official from an international organisation with direct knowledge of the rankings, would mark a rare boost for Thai-US relations. Ties between the countries have flatlined since the Thai military seized power in a 2014 coup that Washington strongly condemned.

It also comes as President Barack Obama works to forge a united front among wavering Southeast Asian countries against China's pursuit of its territorial claims in the South China Sea.

Bangkok has protested to Washington that it should be removed from the lowest ranking on the US State Department's annual Trafficking in Persons (TIP) report, which is due to be released Thursday evening.

The report is expected to cite improvements in Thailand's efforts to combat human trafficking, especially in its vital seafood industry, the US official said. The upgrade would put Thailand up one grade from Tier 3 to "Tier 2 Watch List". That will remove Thailand from the rating for countries with the worst human-trafficking records.

The US government kept Thailand at Tier 3, the lowest rank, in its 2015 Trafficking in Persons (TIP) report after Thailand was initially demoted in 2014. This followed four consecutive years during which the country remained on the report's Tier 2 Watch List.

Thailand was downgraded to the lowest ranking in June 2014 after warnings to the Yingluck Shinawatra government, and announced officially just weeks after the military seized power.

Thai officials were incensed last year when Malaysia was upgraded from Tier 3 but Thailand was not, and even human rights advocates agreed Bangkok had made a greater effort to curb human trafficking than Kuala Lumpur.

Sirinart Chaimun, director-general of the Trade Negotiations Department, said the department has not yet received the official report on the ranking. It is scheduled to be released at the US State Department at 8pm Thursday, Thailand time.

But if Thailand is officially upgraded to the Tier 2 Watch List, this will have a positive psychological impact on consumers, importers, as well as retailers in the US and European markets, who are expected to buy more Thai products, particularly from the fishery sector.

A Commerce Ministry source said the news, if confirmed, would be the result of the hard work and determination of all involved in tackling human trafficking.

The change was not a quid pro quo for Thailand agreeing to join the Trans-Pacific Partnership (TPP) in return for the TIP report's upgrade, the source said.

Deputy Prime Minister Somkid Jatusripitak said last month Thailand was ready to join the regional trade bloc as soon as it is open for new membership. A committee chaired by Commerce Minister Apiradi Tantraporn has been set up to prepare the move, he said.

Malee Choklumlerd, director-general of the International Trade Promotion Department, said Thailand's upgrade in the TIP report is expected to boost exports of Thai frozen seafood products to the US, Europe and other foreign markets in the latter half of this year.

Finance Minister Apisak Tantivorawong said Thailand has been working on the human trafficking issue progressively and the Tier 2 Watch List upgrade by the US bodes well for the outlook of the domestic fishing industry and Thai seafood exports.

This development can help stimulate Thailand's economic growth as seafood goods make up a high proportion of exports and they have not been substantially affected by the global economic slowdown, he said.

Chanintr Chalisarapong, president of the Thai Tuna Industry Association, said the upgrade is a positive signal that would help improve the image of Thai products in the world community, which in turn would help boost Thai exports.

"The government has been on the right track and the private sector wants the government to continue in this direction until we can eliminate the [human trafficking] problem completely," he said.

Vallop Vitanakorn, vice-chairman of the Thai National Shippers' Council, said any upgrade to the Tier 2 Watch List would be an outcome of collaboration between the government and the private sector to solve the problem and explain to the world how the country has worked to improve its human trafficking record. 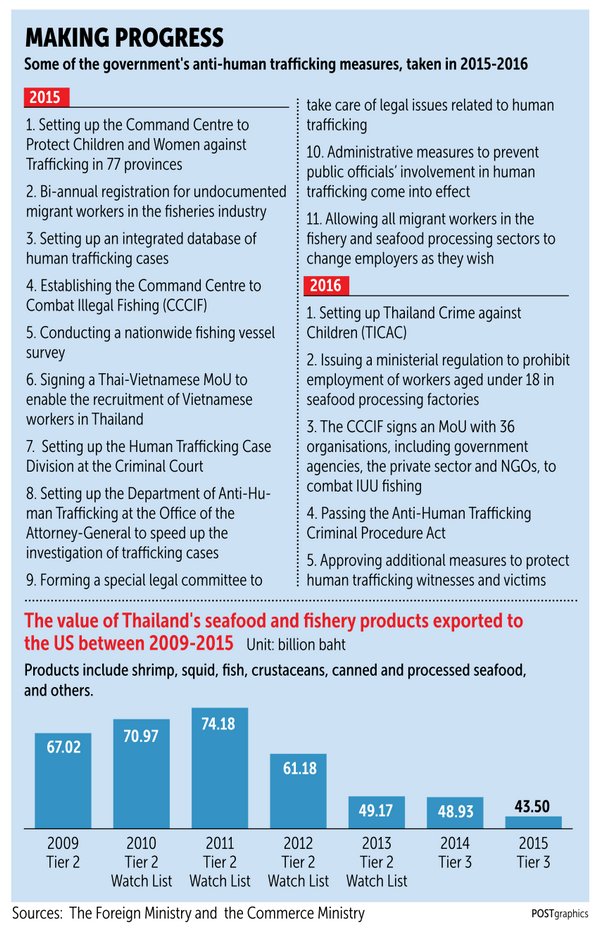