Economic crime suppression police show more than 3,000 pairs of fake brand name jeans, along with and the two suspects at a media conference in Bangkok on Tuesday. (Photo by Weerawong Wongpreedee)

Economic crime police have arrested two men in Nonthaburi province with about 3,000 pairs of fake brand name jeans made for a regular Malaysian buyer.

In one house police found 3,262 pairs of jeans falsely tagged as Levi, Guess, Evisu and Diesel brands with a value of 978,600 baht. In the other house, they seized 123,640 brand name badges and buttons worth about 50 baht each - a value of 6.18 million baht in total.

Mr Bulakorn said at the media briefing that he made the jeans for sale. A Malaysian buyer paid him to make pirate products bearing famous brand names. The Malaysian purchased 2,000-3,000 pairs of fake jeans each month.

Mr Bulakorn said he had been in the business for two years and sent the fake jeans to the buyer by truck.

The two men were charged with the possession of pirated products for sale. Police would expand investigation to include the buyer in Malaysia, Pol Col Sitthichai said. 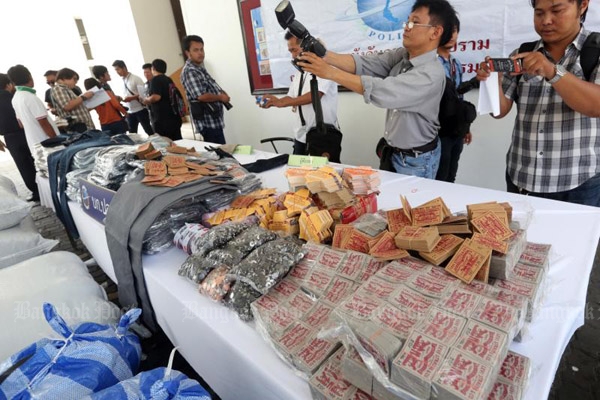 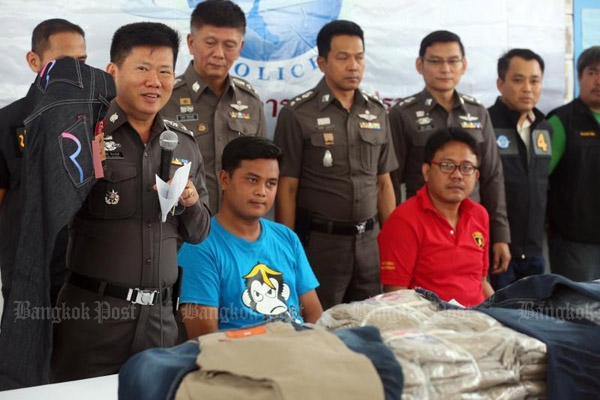