The importance of foreign migrant labour as an essential source of workers in Thailand is a topic of daily comment, discussion and concern. With rising wages and stabilising population growth, industrial and service sectors cannot effectively function without availability of non-Thai workers, mostly from neighbouring countries. Yet this valuable, essential resource is treated almost as an undesirable blight rather than a welcome benefit. Legitimate work and stay permits are provided reluctantly and in insufficient numbers. Many workers are underpaid, even to the point of almost slave labour conditions, mistreated by employers and often arrested by authorities.

Because of the lack of proper welcoming facilities, and the prevalence of illegal workers, there are no accurate statistics on the number of Mekong Region country nationals presently undertaking economic activities in Thailand. Estimates may be on the conservative side. However it is believed that there are over 3 million Myanmar workers, close on one million Cambodian workers and potentially another million Lao workers, this latter group being hard to identify because of racial and linguistic similarly with their trans-Mekong neighbours of the Isarn region.

In addition to the predominant, direct neighbouring country workers, there is one additional important group of Mekong Region workers, namely the Vietnamese, who form a significant group of foreign workers in Thailand. This migrant worker group often provide employers with the benefits of superior skills, diligence and performance effectiveness. 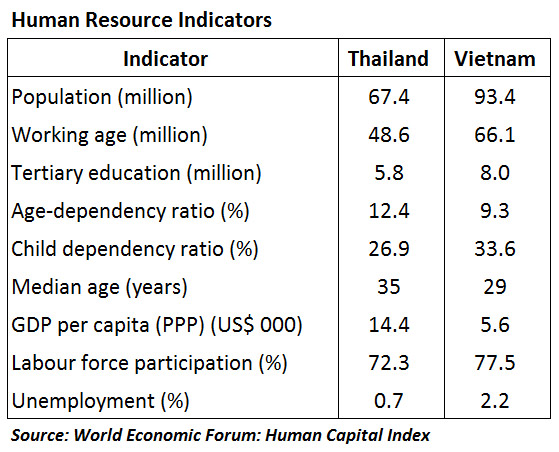 According to a recent study by Dr. Nguyen Ngoc Lan of the Institute of Southeast Asian Studies in Hanoi, on the subject of Vietnamese workers in Thailand, there are over 500,000 Vietnamese overseas workers, of whom an estimated 50,000 are in Thailand. This number may, like other nationalities, be under-estimated owing to flows of illegal, undocumented immigrants.

Vietnam is a more regulated society than Cambodia, Myanmar or Laos, and workers going overseas are organised through the Department of Overseas Labour, which is under the Ministry of Labour, Invalids and Social Affairs, with actual recruitment through both state-owned and also private recruitment agencies. However many workers travel independently, mainly through Laos with some also transiting through Cambodia, thereby having to cross two frontiers along their journey.

Vietnam now enjoys much better living and working conditions than the other Mekong Region countries, with improving domestic job opportunities in many export industries. Some of these industries have been established by Thai entrepreneurs taking advantage of more favourable investment conditions in Vietnam than in Thailand, especially for labour-intensive industries.

Accordingly, Vietnamese workers coming to Thailand are likely to have better education and more purposeful aspirations than those from other Mekong countries. They often seek to acquire job skills and eventual entrepreneur opportunities. However some come from poorer border provinces with lower skill levels and lesser job level aspirations.

Most likely occupations are in restaurants, hotels, domestic service, construction, fisheries and some factory occupations.

There are long-established Vietnamese Communities in Thailand, especially in the Northeast, riparian towns, and in certain districts of Bangkok. These communities welcomed new arrivals, both of exiles during the French colonial period of Vietnam, including an extended sojourn by independence leader Ho Chi Minh, as well as Catholic Vietnamese leaving Vietnam during the Communist advance and final takeover and unification of Vietnam.

In an attempt to regularise labour cooperation between Vietnam and Thailand, there have recently been a number of formal Memoranda of Agreement. Under an initial Thailand Cabinet Resolution of February 2015, workers already in Thailand in the domestic household, construction, fishing and catering services were allowed to register for work permits for temporary continuation of employment. Few Vietnamese immigrant workers actually registered under the initial Memorandum but this was followed by a further Memorandum in July 2015. This provides more detailed regulations in respect of processing of workers, contracts, visas, medical services, health and welfare. These regulations should in theory provide a sound basis for legal recruitment and employment to correct previous abuses.

However, the Thailand regulations still fall short of a comprehensive and realistic framework for employment which would be necessary to enable Vietnamese workers to meet the employment needs of Thailand’s already full employment situation. However, the range of occupations and industries remain narrowly defined, and the numbers open for registration are relatively small in relation to the estimated existing Vietnamese workforce in Thailand. Periods of work are also restricted, generally to one year. It is unrealistic for Thai employers to recruit, train and employ workers for restricted periods, although the objective is to prevent Vietnamese from becoming permanent residents and eventually potentially citizens of Thailand.

The establishment of Special Economic Zones on the borders of Thailand with Myanmar, Laos and Cambodia offer opportunities for Thai employers to hire trans-border workers on a long-term basis. However, such situations would not apply to Vietnamese workers, who are not from adjacent border countries but offer particularly high quality potential which deserves recognition in the total labour supply situation.

Christopher F. Bruton, 45 years in Thailand, is Executive Director of Dataconsult Ltd, a local consultancy. He can be reached at chris@dataconsult.co.th. Dataconsult’s Thailand Regional Forum provides meetings, seminars and extensive documentation to update business on present and future human resource and general political and economic trends.