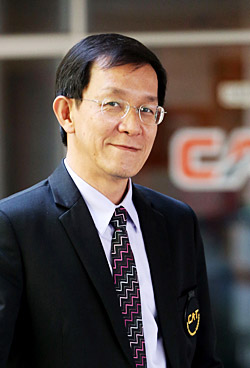 Mr. Chaiyut Santananukarn, Senior Executive Vice President, Marketing and Sales, CAT Telecom PCL, said CAT is ready for signal transmission of the Rio Olympics. "CAT has been trusted by the Television Pool of Thailand to broadcast the long-waited Olympic Games taking place in Brazil during 3-21 August 2016," he said. "The transmission will receive the digital signal from ASIASAT 5 satellite and send the signal to TV stations for broadcasting on free-to-air channels -- 3, 5, 7, 9, and NBT -- as real-time high-definition digital signal transmissions of video and voice. CAT will be operating Full HD transmission with downlink from ASIASAT 5 and then forward to the TV Pool. It will be the first time in Thailand that the TV Pool has broadcast the Olympic Games in HD format. CAT is fully equipped with well-organised systems and devices as well as expertly-trained staff who will work around-the-clock to ensure the best quality transmission so the audience can enjoy an undisrupted experience of the games brought to them by CAT. Thai audiences will watch together with global audiences all the Olympic program, including highlights such as the first women’s football match on 3 August, the opening and closing ceremonies on 5 and 21 August, as well as daily competition results. With these channels, Thai people are cordially invited to send our national athletes and teams lots of encouragement to battle for Olympic glory."

This coming 31st Olympics in Rio de Janeiro will make Brazil the first country in South America to host the event. Participating in the Olympics will be over 10,500 athletes from 206 countries, conquering 306 gold medals in 28 sports and 41 disciplines. South Sudan and Kosovo will be joining their first Summer Olympic Games. The battle for Olympic medals will take place in 33 venues in Rio de Janeiro, plus five venues in co-host cities: São Paulo -- Brazil’s largest city; Belo Horizonte; Salvador; Brasília -- Brazil’s capital city; and Manaus. With its promptness and grandeur, Brazil will prove that Rio 2016 was worth the four-year wait.