Kanbawza Bank (KBZ Bank) has opened a representative office in Bangkok, the first Myanmar bank to establish an international presence.

Earlier this year, KBZ Bank officially received a licence from the Bank of Thailand to open the office in the capital. The bank also recently obtained a representative licence to open an office in Singapore, continuing its planned expansion within the Asean region. 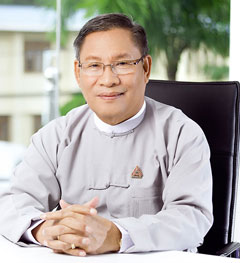 Than Cho, senior managing director of KBZ Bank, said the office would start offering financial and advisory services as soon as possible to Myanmar people and to businesses in Thailand.

“Naturally, Thai businesses are interested in entering Myanmar. We hope they take advantage of our extensive knowledge of Myanmar’s financial markets and join the growing bilateral trade between our two countries,” he said.

Zeyar Sein Htut, KBZ Bank's new chief in Thailand, said the bank will focus on activities such as market research, liaising with the private sector and serving as a source of information, including regulatory requirements for doing business both in Thailand and Myanmar.

KBZ Bank wants to explore opportunities to build relations with, and eventually cater to, the large Myanmar population in the kingdom -- estimated at 3 million people -- when they return to their home country.