The Mae Sot-Myawaddy checkpoint is one of the three border crossings that are open to foreigners entering from Thailand with e-visas. (Photo by Patipat Janthong)

Myanmar's Ministry of Immigration has announced that three border checkpoints are now open to foreigners entering from Thailand with e-visas.

“We are pleased to announce that starting from 1 September 2016,  e-visas can be used to enter Myanmar [Burma] from the following three land border checkpoints, between Myanmar and Thailand — Tachileik, Myawaddy and Kawthaung,” said the Ministry of Labour, Immigration and Population on its website, according to the Democratic Voice of Burma.

Previously, visitors to Myanmar could only enter the country with e-visas via international airports at Yangon, Mandalay and Nay Pyi Taw.

Fees for the overland visa are the same as before: US$50 for a tourist visa (28 days) and $70 for a business visa (70 days), payable online by Visa, MasterCard, Amex or JCB. Applicants can simply go online and fill in a form. The only addition requirement is a digital image of a passport photo. The waiting period, if accepted, is three days. (continues below) 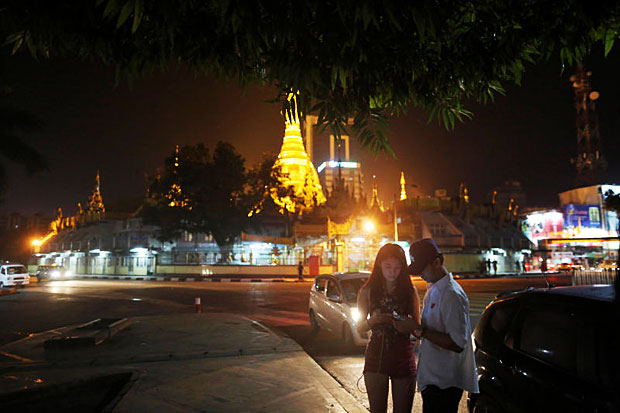 News of the new routes is sure to be well received by intrepid travellers from any of the 100 countries listed as eligible for an e-visa, who no longer have to queue up at a Myanmar embassy for consecutive days to get a stamp to enter the country.

“It’s certainly going to facilitate and increase arrivals,” said Mark Ord of UK-based tour operator All Points East, which specialises in off-the-beaten-track tours to Myanmar. “It’s a great initiative, though they seem to have omitted the Dawei crossing, which is the easiest from Bangkok.”

The Dawei highway is still under construction, and several armed groups are active in the area – so security is the most likely reason that this route is not yet available. However, tourists can now weigh up any of three options – from northern, central or southern Thailand – if they are looking to make an overland trip to Burma. (continues below) 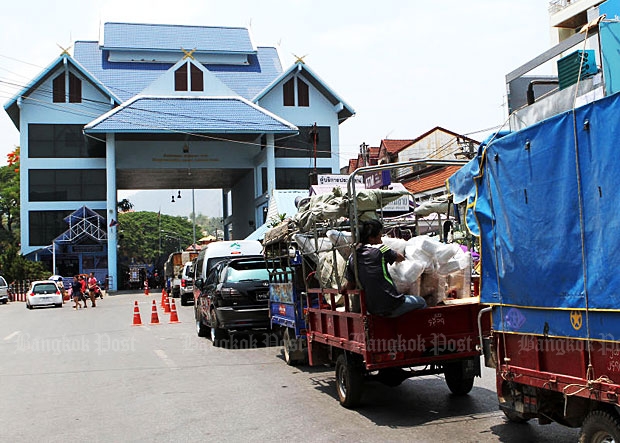 Tourism and trade between Thailand and Myanmar is dynamic at the border between Mai Sai district, Chiang Rai, and Tachilek. (Photo by Pattarapong Chatpattarasill)

Mae Sai is Thailand’s northernmost point, some 250 kilometres from Chiang Mai. It is located in the Golden Triangle area, named for the infamy of opium and heroin smuggling. After crossing the bridge to Tachileik in Shan state, visitors find themselves in a dusty bootleg village, where merchandise is available at knockdown prices. A four-to-five-hour bus ride from Tachileik will take you to Kengtung, an endearingly sleepy quasi-colonial town, which also offers an excellent introduction to some of Myanmar’s myriad ethnic groups. Kengtung has an airport with connections to Mandalay and Yangon. 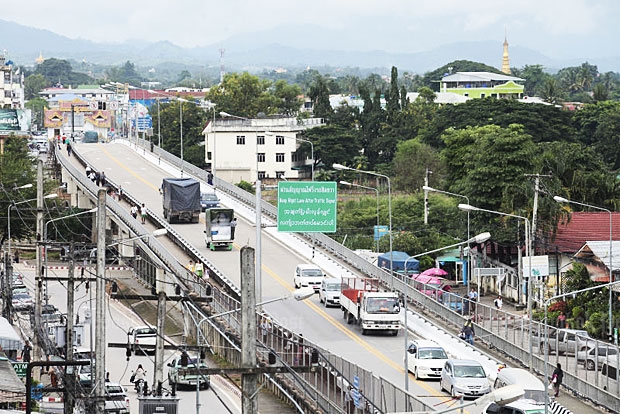 Mae Sot is a wild west kind of town, plentiful in cross-border trade. It has a strong Myanmar and Karen population and is close to several refugee camps. Crossing the Friendship Bridge to Myawaddy, travellers can get a bus to the lovely town of Hpa-an in Karen state or Moulmein in Mon state, both of which are good connecting points to Rangoon.

The bustling fishing port of Ranong is easily accessible from Phuket, Koh Samui and the other paradise beaches of Thailand’s south. You can also get an overnight bus to Ranong from Bangkok or, even better, Nok Air has recently launched cheap flights there from Don Meuang. Cross to Kawthaung (make sure you exchange money and have enough Burmese kyat in cash – you might not see an ATM for a long while), and then head for Myanmar’s tropical Andaman coastline. Tourist infrastructure is still not in place, but expect tours and hotels to start popping up everywhere in the near future around Myeik [Mergui] and its castaway islands in the archipelago.

Myanmar is making grand efforts to entice foreign tourists. Though it pains the authorities to admit it, a majority of their visitor numbers to the country – nearly five million last year – are truck drivers, merchants and businesspeople from Thailand and China. The actual number of sightseeing/ souvenir-buying tourists is far lower.

As both Thailand and Myanmar sign more agreements on trade, road-building projects and economic zones, more and more avenues are opening up for those with a sense of adventure – a chance to see some beautiful unspoilt locations in Myanmar before everyone else gets there.