The military-ruled government has not hampered foreign investor enthusiasm as the former has brought peace to the country and led to reforms and big-ticket infrastructure investments, says the head for Thailand of Bank of America Merrill Lynch.

"Politics is not a matter for foreign investors and they feel the military-backed government has helped bring peace to Thailand. The government has moved towards reforms and its economic plan involves investing in large-scale infrastructure projects," Ornkanya Pibuldham, the bank's country head for Thailand, told the Bangkok Post in an executive interview. 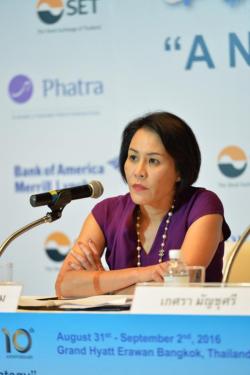 Politics is not a matter for foreign investors, says Ornkanya Pibuldham

With the surge of capital inflows, the baht has gained 4% this year and the SET index -- one of the world's best performers -- has increased around 20%.

Foreign investors have enjoyed a handsome return from the stock market plus a windfall from the firmer baht versus the US dollar. Fund inflows are expected to continue as Thailand is the most attractive destination in the region, she said.

Bank of America Merrill Lynch forecast the greenback will strengthen later this year, with the baht falling to 36-37.50 to the dollar, assuming the US Federal Reserve jacks up its policy rate in December after the US presidential election on Nov 8.

Ms Ornkanya said Thailand's Monetary Policy Committee will maintain its benchmark rate throughout this year even if its counterpart in the US raises rates.

Amid the prolonged low-interest-rate environment, investors have scoured the world looking for yields, prompting many companies to sell a substantial amount of unrated bonds with coupon rates of 3-4% for a three-year maturity in recent months.

"The Bank of Thailand is now concerned about this aggressive search for yields. Given low deposit rates, institutional investors such as thrift and credit cooperatives, temples, universities and foundations are storming the unrated bonds," she said.

In another development, she said exports, accounting for around 70% of the Thai GDP, are expected to remain tepid throughout this year in part because of the baht's strength, which could take a toll on the economy.

But the bank increased its Thai economic growth projection to 3.2% this year from 2.8% because of government spending, said Ms Ornkanya. Listed companies' earnings are estimated to grow by more than 10% in 2016, she said.

"Thailand's economic outlook is still thriving among its peers in the region, so capital inflows into the Thai stock market are expected to continue, especially from investors in the US, Europe, the Middle East and Japan," said Ms Ornkanya.

Sectors expected to benefit from the government's economic stimulus packages are consumer-related and services including hospitality, hotels, aviation, airports and consumer goods, she said.