Tourists take a selfie at a department store in Bangkok on Wednesday. (Reuters photo)

Bangkok has beaten London to be crowned the world's most popular travel destination this year, according to an annual ranking by global payments and technology company Mastercard released on Thursday.

Tourism has been one of the rare bright spots for Thailand, which has grappled with weak consumer confidence and exports after a 2014 coup.

Last month's wave of bomb blasts in southern Thailand, which police have blamed on Muslim separatists, appears to have had a limited impact on tourism.

Bangkok topped the 2016 isting of 132 cities, beating London, Paris and Dubai to become the city most visited by international travellers in the MasterCard Index of Global Destination Cities.

"It isn't a flash in the pan. Bangkok is in a strong position to be the top destination city for a long time," Yuwa Hedrick-Wong, MasterCard chief economist, told Reuters.

"There's the value for money, especially for visitors coming from high-income countries." 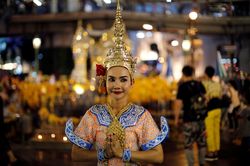 A Thai classical dancer poses for photos at the Erawan shrine in Bangkok on Aug 30, 2016. (Reuters photo)

Thailand expects to welcome a record 33 million visitors this year, thanks to a jump in the number of Chinese tourists.

Sprawling Bangkok is projected to receive 21.47 million international visitors in 2016, just ahead of second-ranked London, with 19.88 million visitors.

"The pollution makes it a less than ideal city to stay long term, but the food is second to none," James Donnelly, 31, a tourist from Britain who was visiting the city on his way to Vietnam, told Reuters.

Elsewhere in Asia, the Japanese city of Osaka has shown the strongest growth in international visitors over the past seven years, attracting tourists from neighbouring countries, particularly China and South Korea, said MasterCard.

The British capital topped the 2015 ranking of global destinations, but MasterCard did not say why some of its shine had rubbed off for travellers this year. The two cities have topped the ranking for most of its history.