Former Unctad chief Supachai Panitchpakdi says many large corporations worldwide are sitting on huge piles of cash but are not investing because the environment is uncertain. Photo: Pattarapong Chatpattarasill

The prolonged global slowdown in overall growth and trade is expected to persist if all parties do not work toward a solution together, the United Nations Conference on Trade and Development (Unctad) has warned.

A global economic recession is now within sight once again, said former Unctad secretary-general Supachai Panitchpakdi as the UN agency painted a blue global economic outlook for 2016 and the years to come.

According to Unctad's Trade and Development Report 2016, the world economy is currently in a "fragile state" with growth forecast to slip to 2.3% this year, from 2.5% in 2014 and 2015. The "mediocre" performance of developed countries is going to continue while the loss of momentum in developing countries will be more severe than previously anticipated.

In July, the International Monetary Fund (IMF) released its World Economic Outlook with a forecast for modest expansion of 3.1% this year and 3.4% in 2017, down from 3.2% and 3.5% in the previous projection, citing the impact of the Brexit vote. However, it said that "better-than-expected economic activity" had continued this year.

The World Bank, meanwhile, has a forecast more in line with that of Unctad. It revised its global GDP growth projection down to 2.4% from 2.9% projected in January, citing sluggish growth in advanced economies, low commodity prices, weak global trade and shrinking capital flows.

"We at Unctad believe ourselves to be more of a realistic projector," Dr Supachai said at the launch of its report in Bangkok last month.

Growth in the United States is projected to slow down this year with weak underlying employment and rising household debt while exporters struggle because of the stronger dollar following an interest-rate increase.

The Unctad outlook is in line with a recent caution issued by Deutsche Bank that all the warning signs seen prior to the previous three US recessions are already present. They include a recession of US profits, a negative reading in the Labor Market Conditions Index of the US Federal Reserve in August, and a decline in expenditure growth, while loan default rates are rising.

Also, Unctad does not see a clear sign of economic recovery in the euro zone where growth seems to have stalled when compared with 2015 while domestic demand is weak. Japan, meanwhile, is still underperforming with low growth, an ageing population and high domestic debts.

Developing countries are expected to continue with average growth of less than 4%. China continues to slow down as ballooning domestic credit has created a debt bubble along with excess capacity in several sectors. India is growing faster than China but is now showing signs of slowing down with emerging debts while a delay in public investment is exposing infrastructure gaps.

"The problem is that there is overproduction and oversupply everywhere, especially in China, because of the mismatch between global supply and demand which has to be dealt with seriously," Dr Supachai noted. 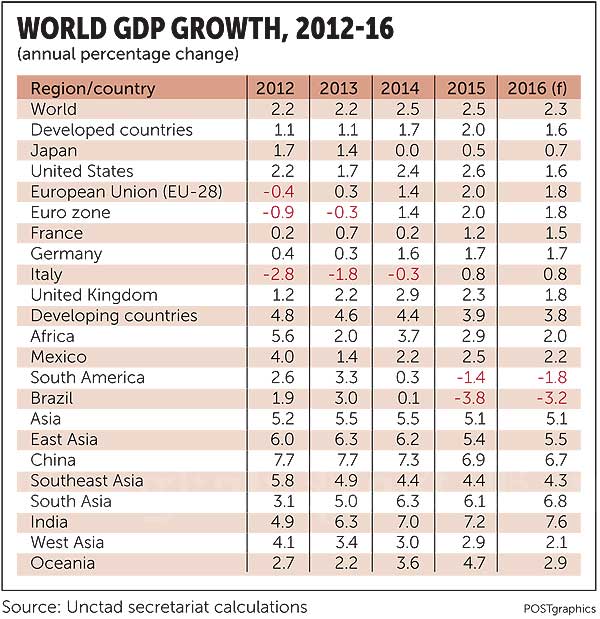 "There is also an overvaluation of liquidity that has been pumped into the global economy via the continuous use of QE (quantitative easing) and it is now overflowing."

He added that large corporations around the world were doing nothing except buying back their shares and paying out dividends as they prefer to keep liquidity rather than making new investment given the weak economic conditions.

"There is no demand. Long-term projects are not happening because the future is so uncertain and the process toward global economic recovery still has a long way to go since the people (central banks) that are capable of fixing the problem are not working together," he said.

"Global corporate debt is also rising at an alarming rate but dividends are still being paid out regularly while asset prices continue to be at a high level and economists are starting to wonder, where are the fundamentals?"

S&P Global Ratings in July forecast that global business debt would likely climb from its current level of US$51 trillion to $75 trillion in 2020. If credit quality stays high, interest rates and inflation remain low, and economic growth persists, it is not a worry.

However, this is not the picture right now and if US interest rates continue to rise and economic conditions worsen, then corporations with high debt could face a major problem managing their debt. S&P also said low interest rates around the world had generated an explosion in corporate and government debt, with around $12 trillion in government debt now offering negative yields.

Dr Supachai said the global financial crisis was persisting as major banks are still overvaluing assets to the point where sovereign debt is no longer credible in Europe due to high national debts in some countries. If a mark-to-market approach was applied to Europe right now, he said, there certainly would be a problem as the European Central Bank is essentially carrying the euro zone with QE policy and no real growth.

Japan has also continued to pump money into its economy but to no avail he said.

"They were supposed to increase their sales tax from 8% to 10% under Abe's administration but now it will be up to the next government. This is just an easy fix via pumping money and buying bonds which does not solve the country problems.

"It is also stupid to continue to penalise savers with extremely low or negative interest rates globally," he added.

Japan has become an ageing society with economic growth dependent on the spending of elderly people but most Japanese elderly are surviving on pensions via savings and interest payments. Therefore, if rates continue to be extremely low or negative, the income of Japan's elderly will continue to be low and the economy will never be able to recover, he said.

Win Udomrachtavanich, executive chairman of KTB Securities (Thailand), agreed with Dr Supachai that another global recession was within sight since the credit supply within the banking industry was currently extremely tight. As a result, central banks have to supply the liquidity but the question is, who will dare to lower interest rates again and who will dare to add more liquidity?

"The Bank of Japan is in the situation that it has to [lower rates and add more liquidity] but it does not dare to do it. If its interest rate goes down yet again but the credit cycle does not improve then no one will survive," he told Asia Focus.

"The problem is the debt burden since it is hard to find new loans because credit is tight, along with the problem of refinancing previous loans. Meanwhile, if you are gunning for future growth via refinancing than you would require expansion which does not exist at the moment."

Dr Win said debt problems and lack of expansion were the reasons why he could see a global recession looming, but it is not here yet as the economy is only in slow-growth mode. For a recession to occur, he believes, it would take something more dramatic such as oil prices falling again, which could lead to defaults from the energy sector and banks unable to survive as a result, or the Fed funds rate being increased too quickly.

A fire broke out at the Fortune Town building on Ratchadaphisek Road on Sunday, leading to an evacuation of the building. No injuries were reported.

An economic stimulus package to allow Thai citizens to buy goods at duty-free shops in three southern border provinces will be tabled for approval at a mobile cabinet meeting in Narathiwat on Monday and Tuesday, an official said on Sunday.